Our fifth installment of Teaching Evolution is a paper by A.S. Romer describing a new species of mammal-like reptile that has a dual jaw joint– the old reptilian one, plus a nascent mammalian one. (In reptiles, the jaw joint is between the quadrate bone of the skull and the articular bone of the lower jaw; in mammals it’s the squamosal and dentary, respectively. We’ve discussed this previously at WEIT.) The transition from reptiles to mammals is one of the most completely exemplified major evolutionary changes in the fossil record. That the ancestors of mammals were to be sought among a particular group of fossil reptiles (synapsids) has been known since the late 19th century, from the work of British anatomist Richard Owen and American paleontologist Edward Drinker Cope. Since then, the story of how this transition occurred, with the bones of the reptilian jaw joint   becoming ear ossicles in mammals, while a new jaw joint evolved, has been worked out in exquisite detail. This paper by Fuzz Crompton and Farish Jenkins gives an overview of the story, and this paper by Luo Zhe Xi has the latest developments. 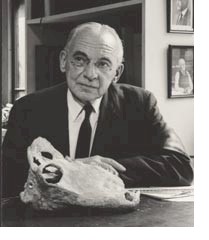 Alfred Sherwood Romer (1894–1973) was for many years the dean of American vertebrate paleontology. A student of William King Gregory at Columbia University, he spent much of his early career at the University of Chicago, before moving to Harvard’s Museum of Comparative Zoology. At the MCZ, he eventually became director, in which position he recruited to the Museum such luminaries as G. G. Simpson and Ernst Mayr. Unlike these colleagues, however, Romer devoted most of his work to the study of evolutionary history, rather than evolutionary mechanisms, publishing on vertebrates of all kinds and times, but specializing on amphibians and reptiles of the Paleozoic and Triassic. He wrote several highly influential textbooks and monographs, including Man and the Vertebrates (1st ed., 1933), Vertebrate Paleontology (1st ed., 1933), The Vertebrate Body (1st ed., 1949), and Osteology of the Reptiles (1956). Edwin Colbert (1982) gives a brief summary of his life and work.

Reading:
Romer, A.S. 1969. Cynodont reptile with incipient mammalian jaw articulation. Science 166:881-882. (This will get you the paper only if you or an institution you are affiliated with has a subscription; if not, judicious inquiry might yield you a copy.)

Study Questions:
1. Why is Diarthrognathus, despite its possession of a double jaw joint, not considered an evolutionary reptile-mammal transition form? What, according to Romer, is the phylogenetic position of Probainognathus, and why does he think so?

2. Given what you know about paleogeography, what do you think about the fact that cynodonts (advanced mammal-like reptiles) of the early Triassic are found in South Africa, while the even more advanced cynodonts described from the Middle Triassic by Romer are from South America?

3. What skeletal feature has reached an essentially mammalian stage in Probainognathus and its relatives (the chiniquodonts)?
[The other installments of Teaching Evolution can be found by clicking ‘MOOC’, under “filed under” or “tags”, just below.]