Yesterday I decided I’d seen enough of Taos (though many will disagree), and I needed to move on. (Like Neal Cassady, I tend to like the moving as much as the staying.) Soon after the sun came up (view below from my motel window), I had some coffee and hopped in the Ceiling Cat RentalMobile: 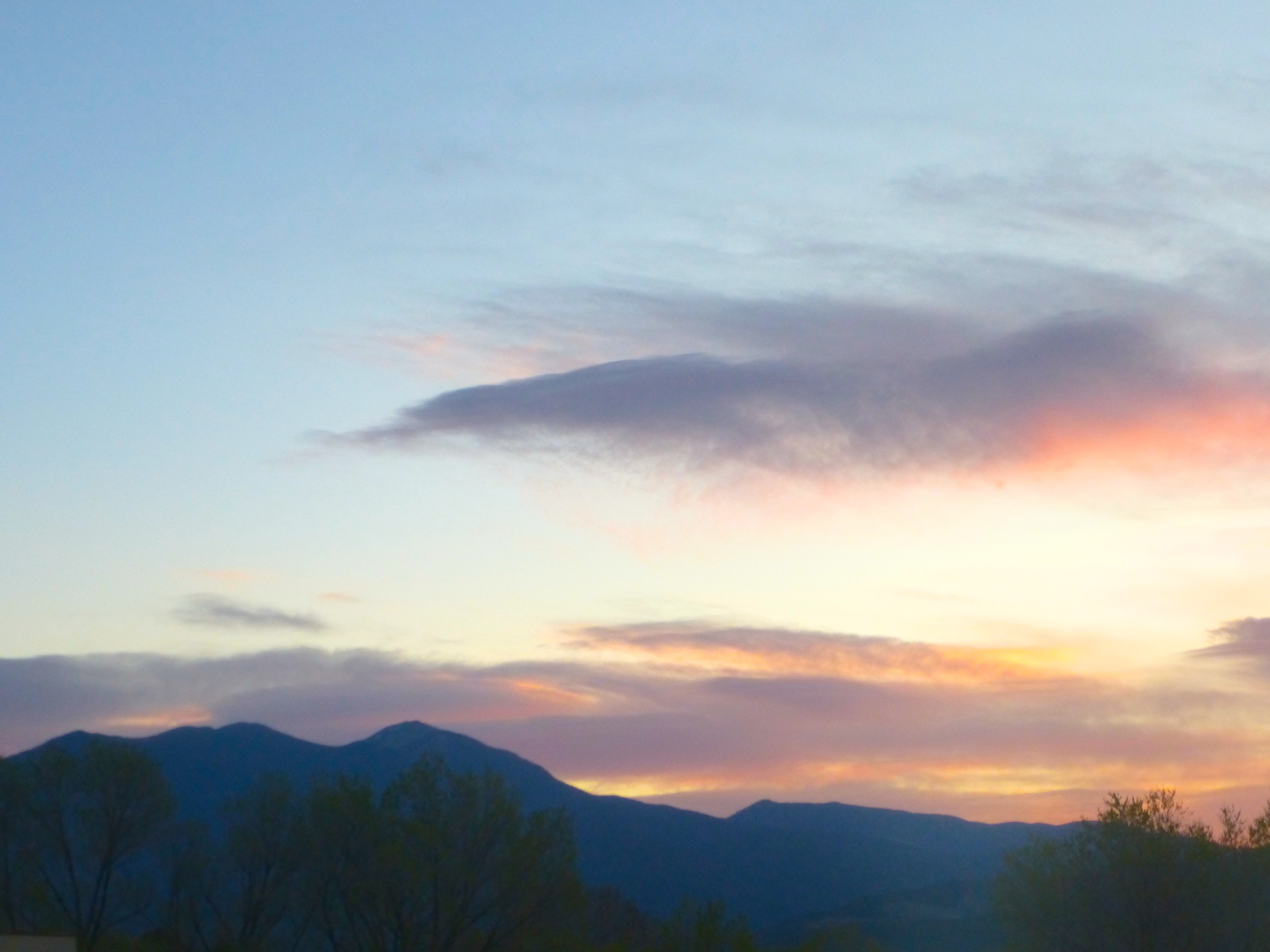 I wanted to do a circle from Taos around to Española, from where, the next day, I could drive back to Las Cruces on back roads, seeing a famous petroglyph site. Here’s the route from yesterday: Taos to Tres Piedras and then circling around the Carson National Forest on Route 64 to Abiquiu, where I hoped to see Georgia O’Keeffe’s home and studio, and then winding up in the untouristy town of Española, only about 25 miles north of Santa Fe. 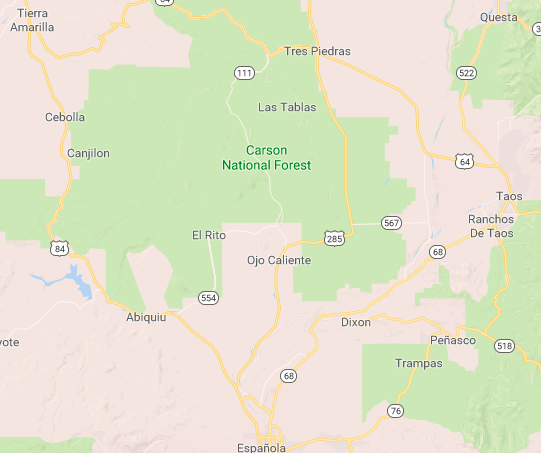 About ten miles west of Taos is the famous Rio Grande Gorge Bridge, a marvel of engineering spanning a 565-foot-deep canyon that contains the Rio Grande River. Built between 1963 and 1965, the 1265-foot steel span gives you a distinct sense of vertigo if you look down while driving over. I waited till I got to the other side, where there’s a rest stop that gives you a proper view. I couldn’t take a good photograph; the one below doesn’t show how bloody deep that canyon is: 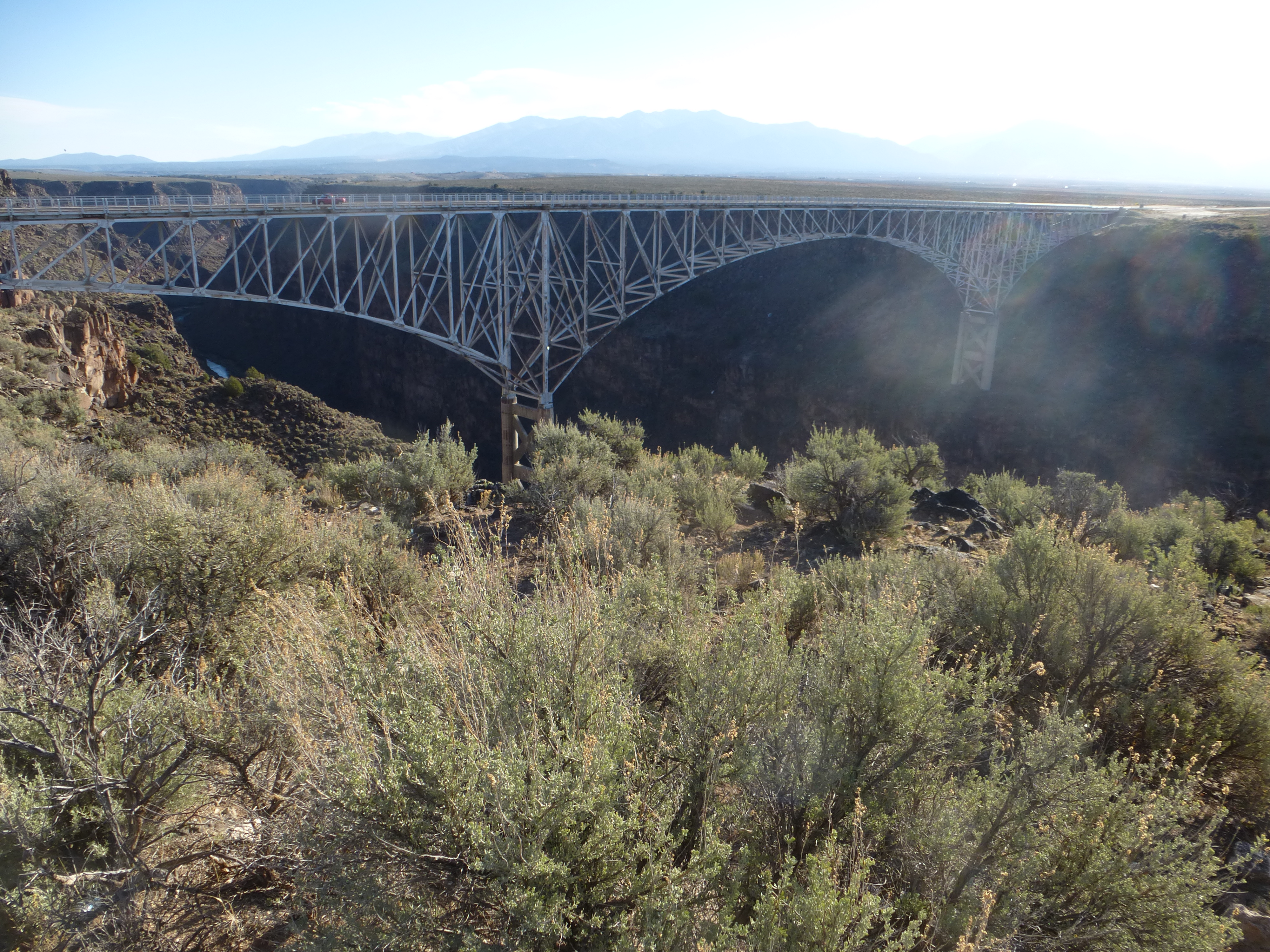 This photo from Wikipedia shows it better: 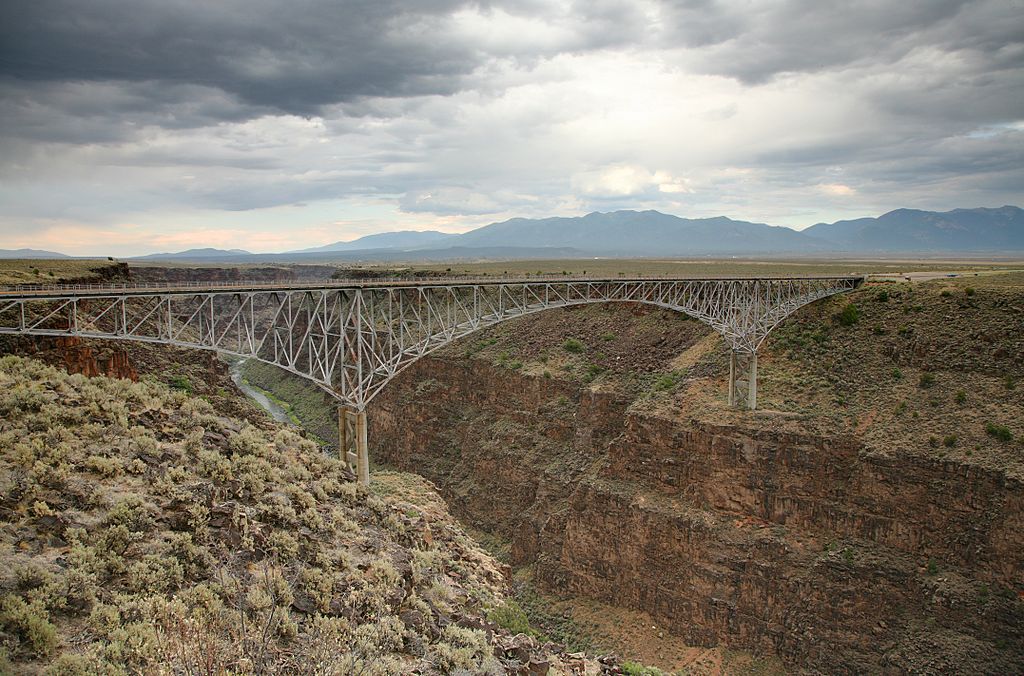 I’ve heard that bighorn sheep (Ovis canadensis), which are usually very shy and hard to see, sometimes brazenly cross the road by the rest stop on the west side. Though I’ve been in bighorn country many times, I’ve never seen one, and so stopped in the rest area to see if I could descry the elusive ovids.

How many times do you see a “watch for bighorn sheep” sign? 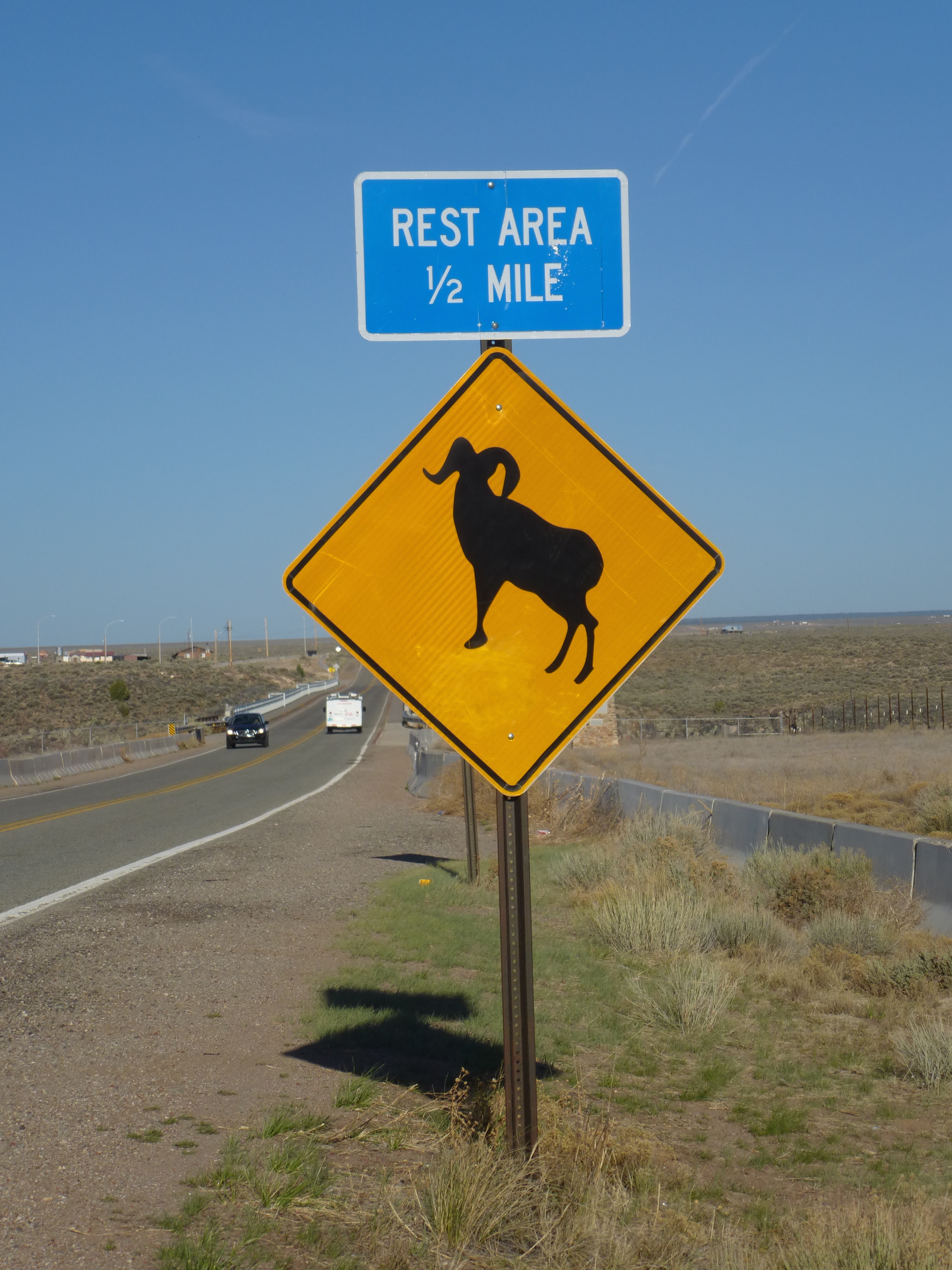 I spied no sheep, but got very close to a cottontail rabbit, probably a desert cottontail (Sylvilagus audubonii). It was grazing peacefully and paid me little attention, so I could get quite close. Isn’t it cute? Lagomorphophiles might verify my identification: 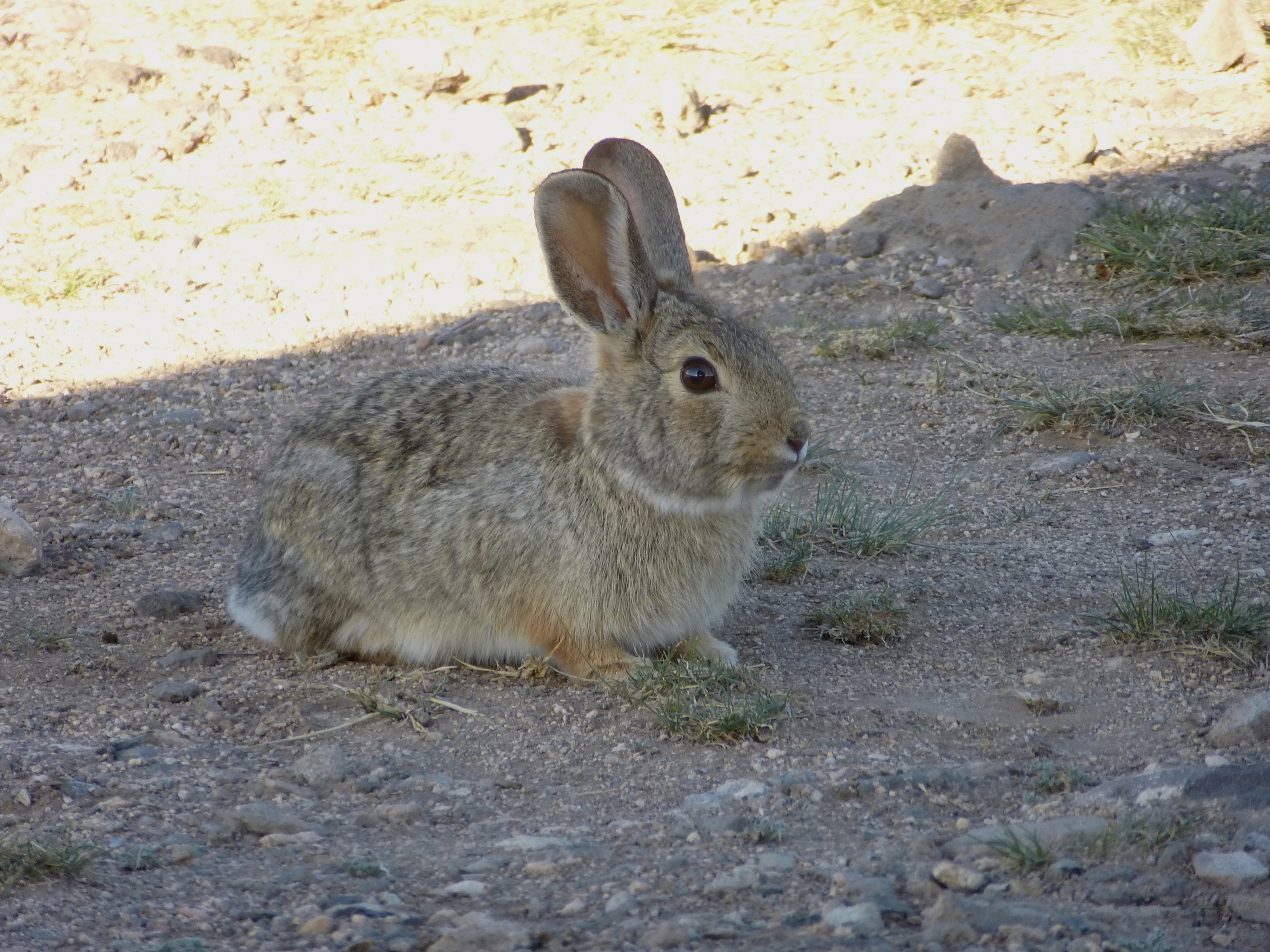 A bit further along is the strange Greater World Community, also called the Greater World Earthship Community, an “Earthship” being, according to Wikipedia, “a type of passive solar house that is made of both natural and upcycled materials such as earth-packed tires, pioneered by architect Michael Reynolds.” Principles of such housing include solar heating and cooling, solar and wind-generated electricity, natural and recycled materials, self-contained sewage treatment, water harvesting and storage, and some production of food.

This is a real self-regulating community of 75 houses; sadly, most are on roads to which you’re not allowed access. (There are two other and smaller Earthship communities in the area.)

The Washington Post has a nice piece about it , showing photos of the weird and wonderful domiciles. You can even rent one or stay for a few days (minimum $140/night in 2016). I couldn’t find out when the community was built, but it had to be after 1988 when Reynolds constructed his first Earthship house.

Here are some of the houses I photographed from the highway or at the “go no further” points on the roads: 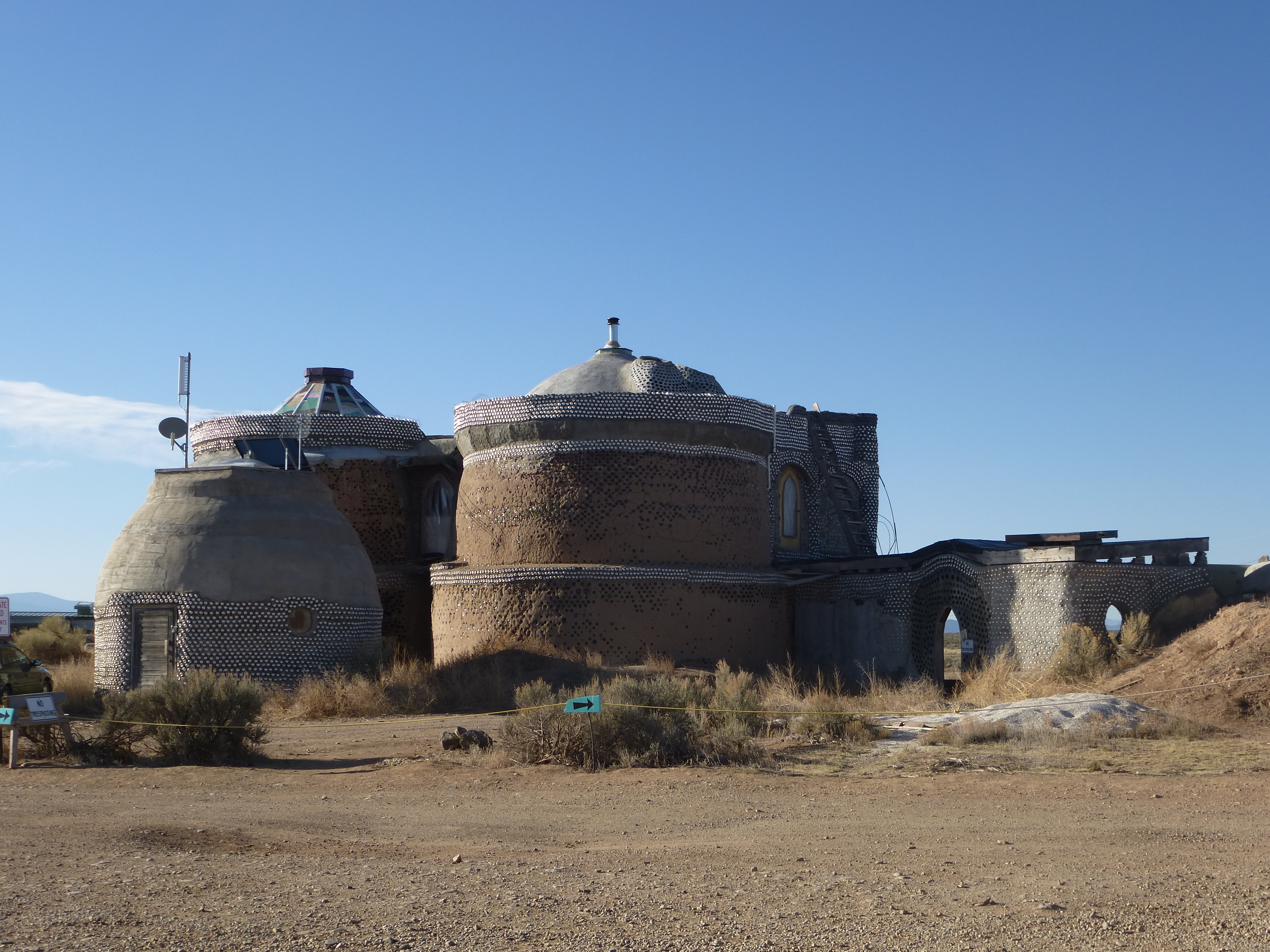 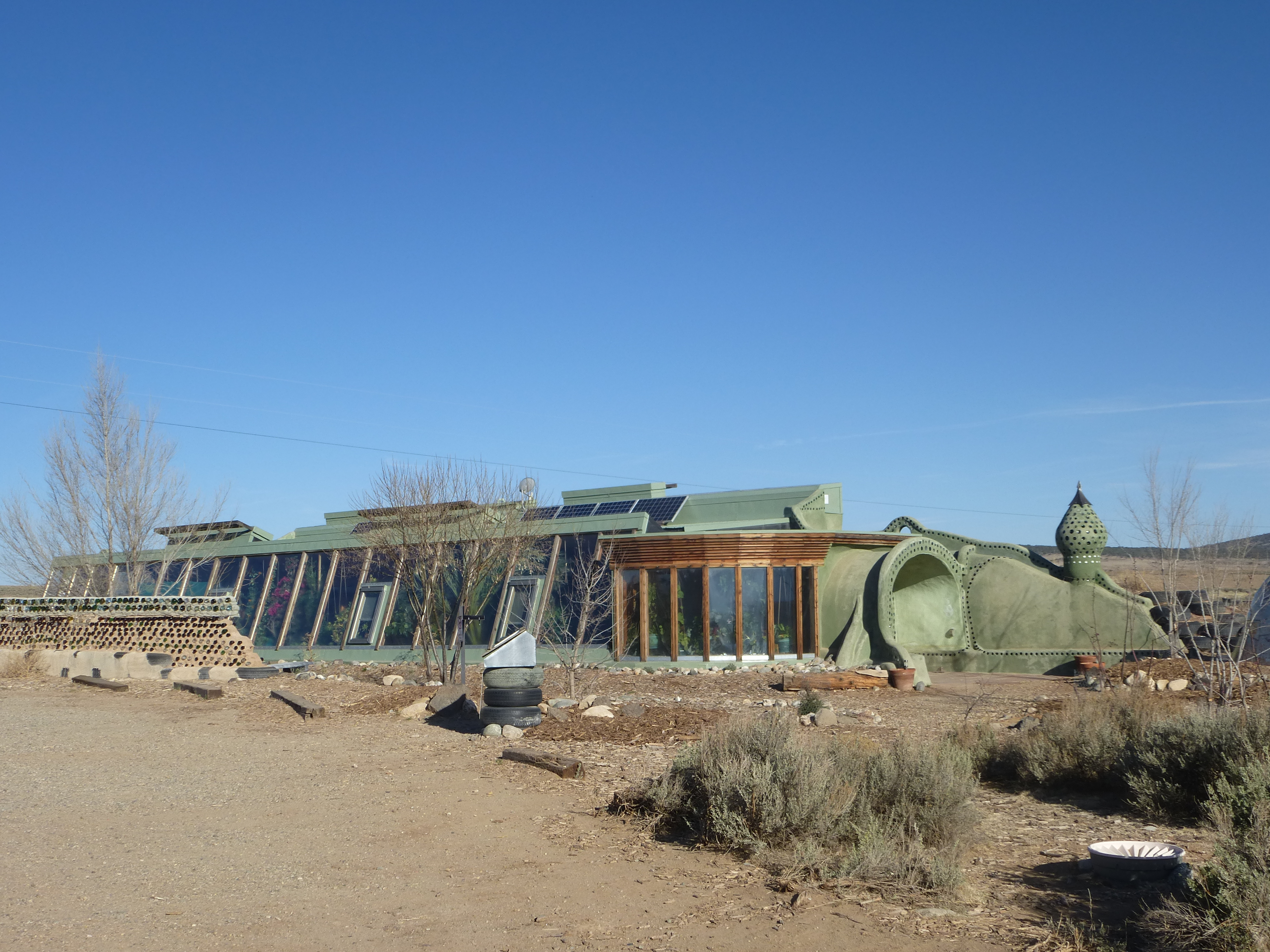 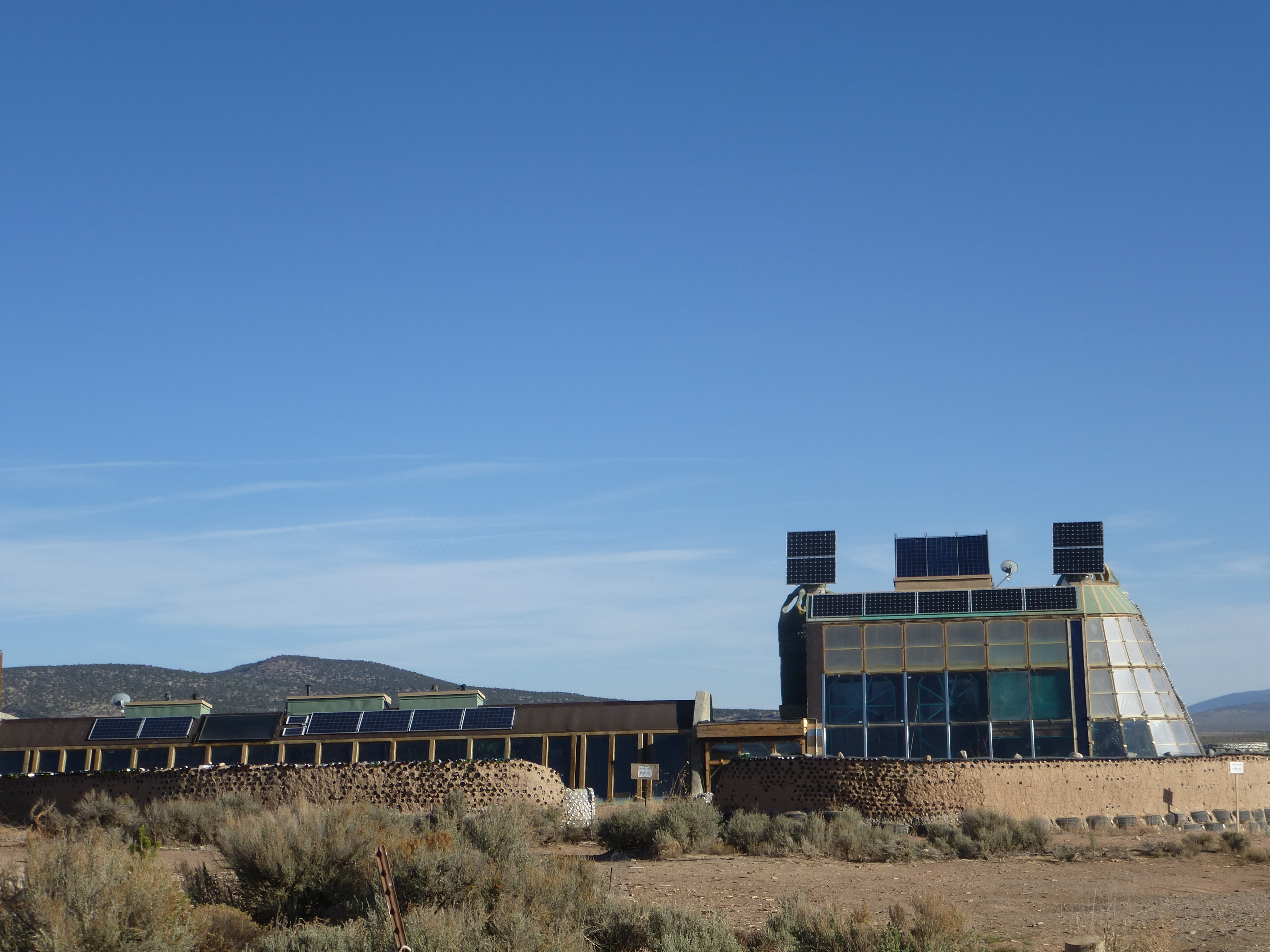 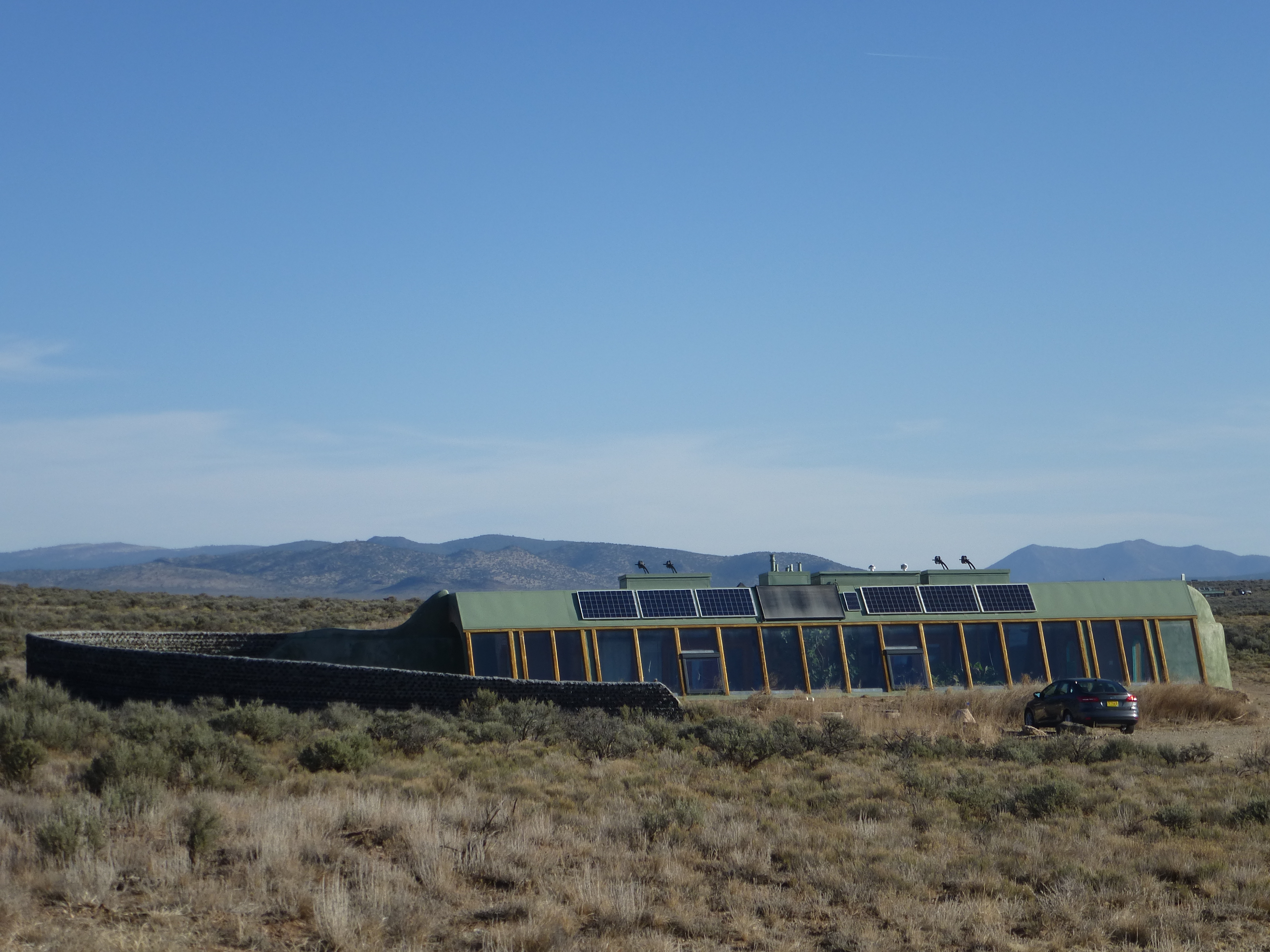 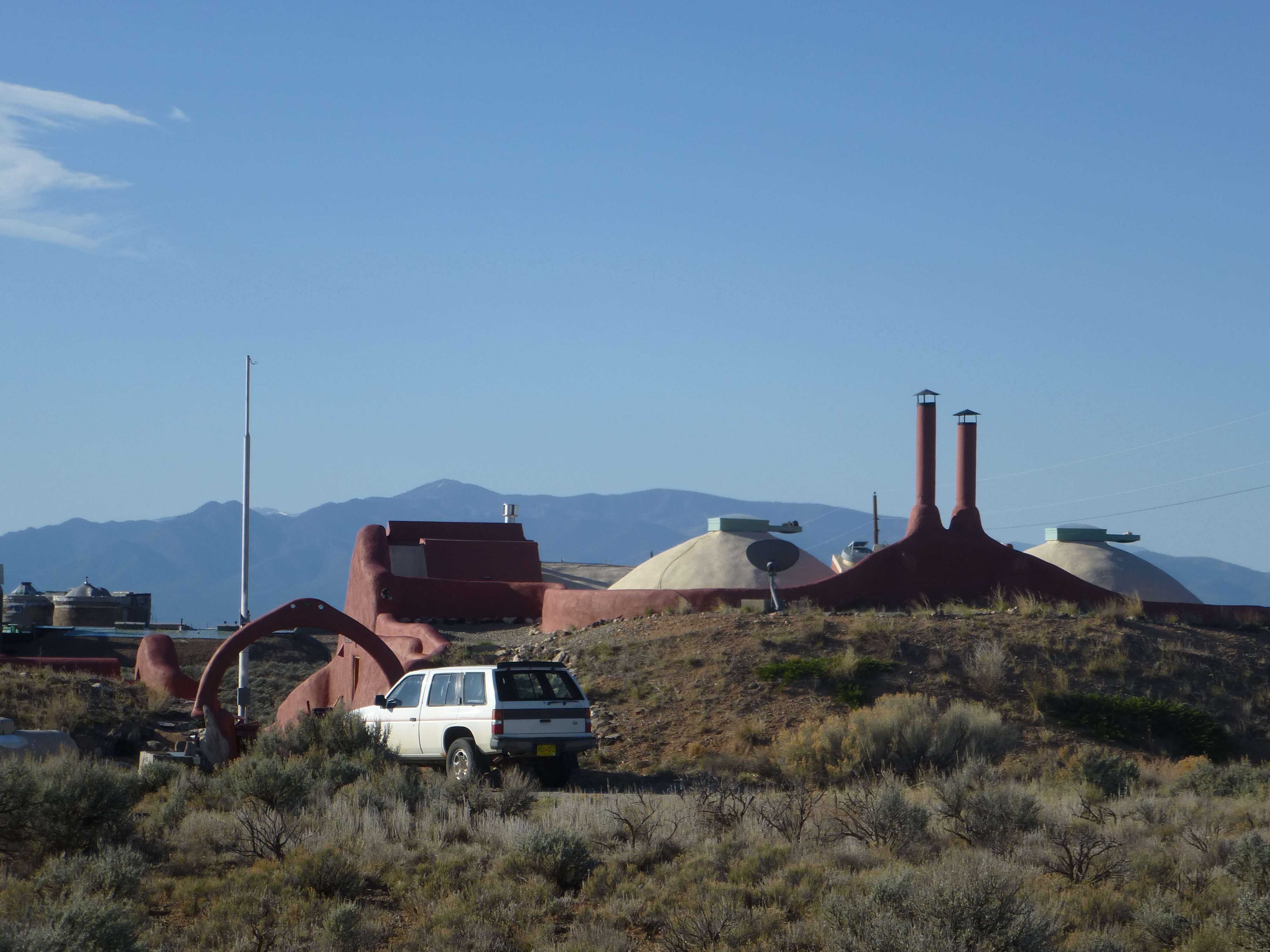 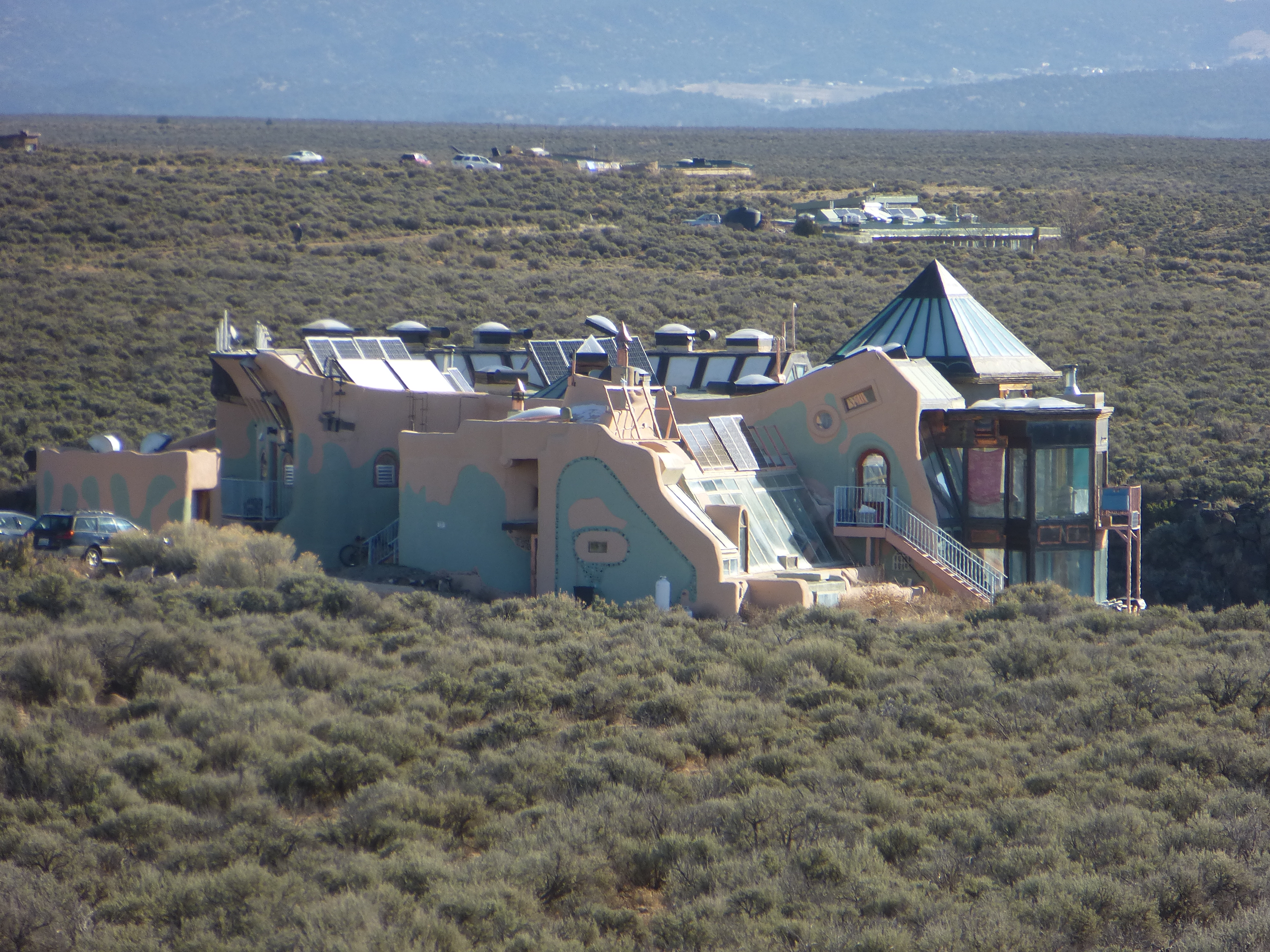 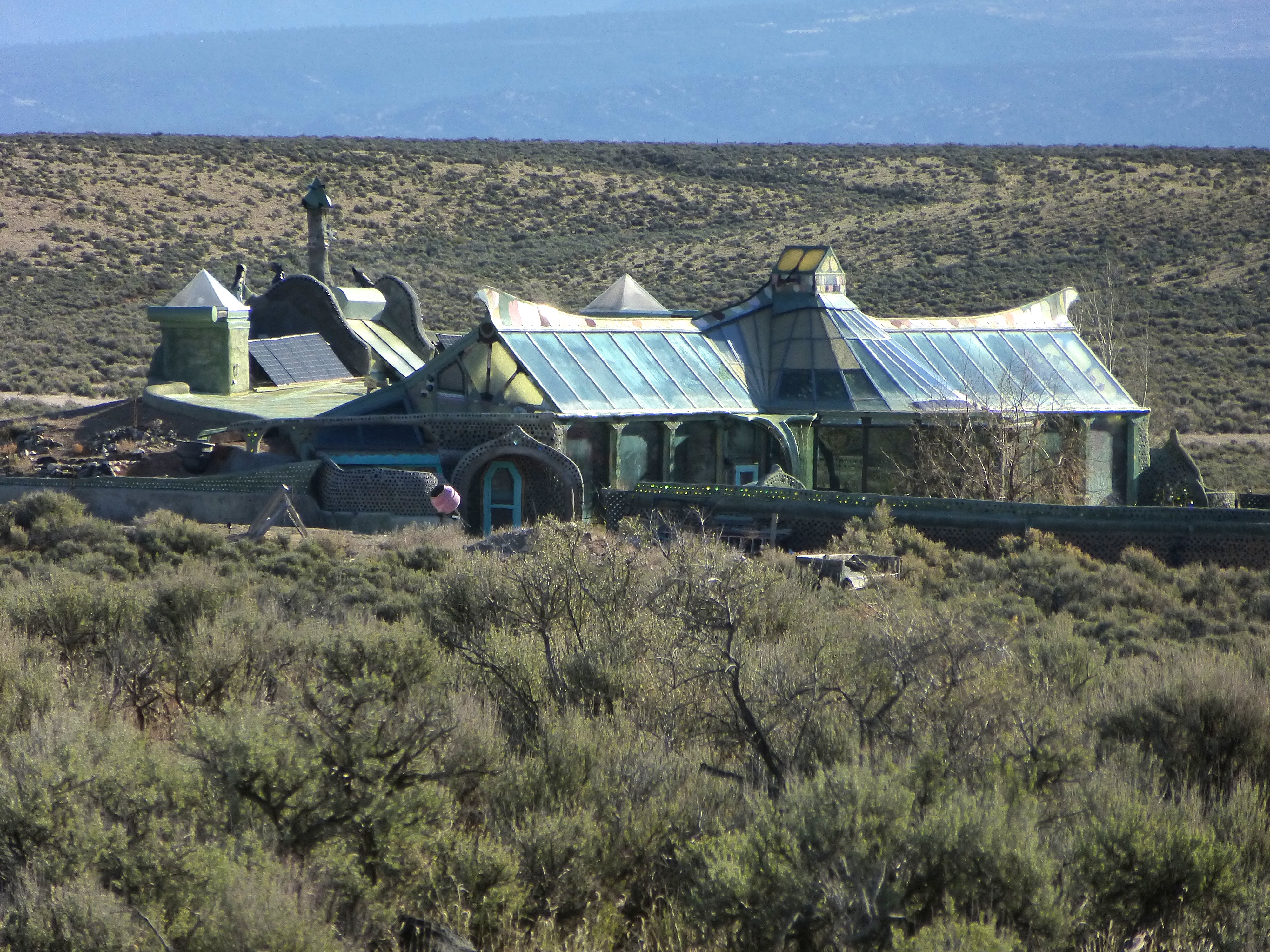 Here’s a short video about this Earthship Community. It’s the ultimate hippie haven, and I felt quite nostalgic seeing it. I wouldn’t mind living in one of these beautiful “off-grid” houses, but I’m a city boy.

Here are some of the lovely views of the drive around the Carson National Forest. It was cold up there, and patches of snow remained by the road. 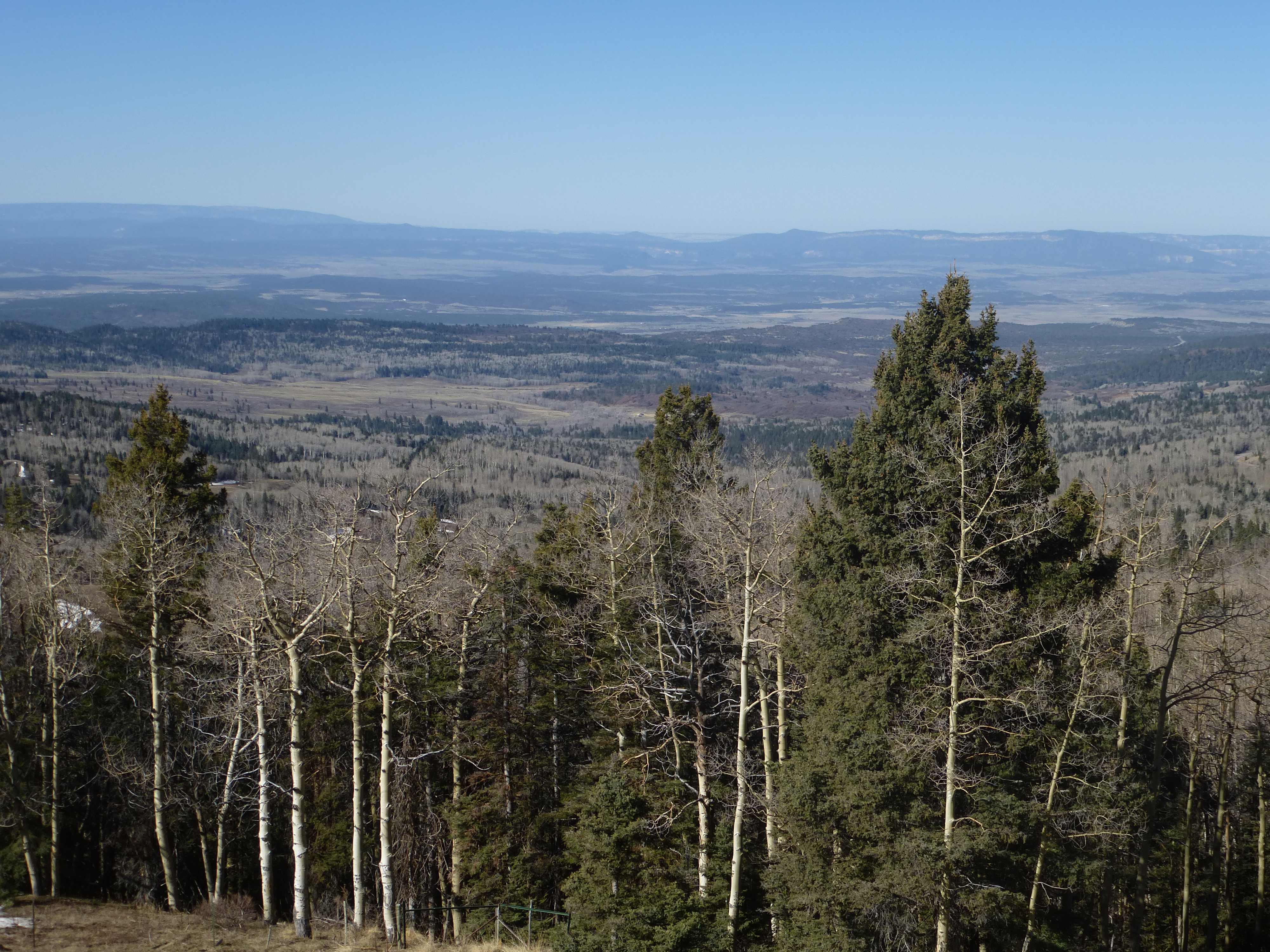 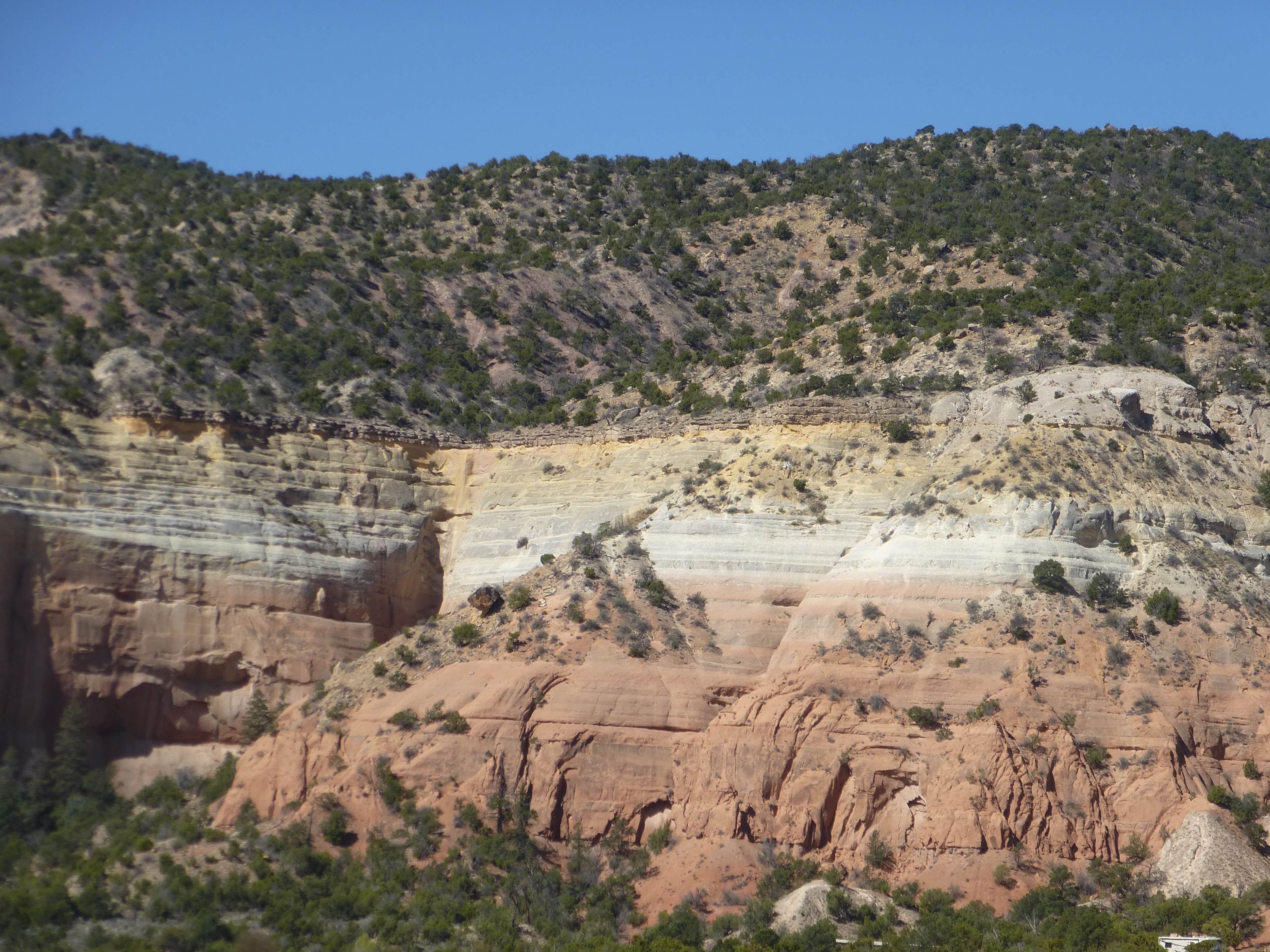 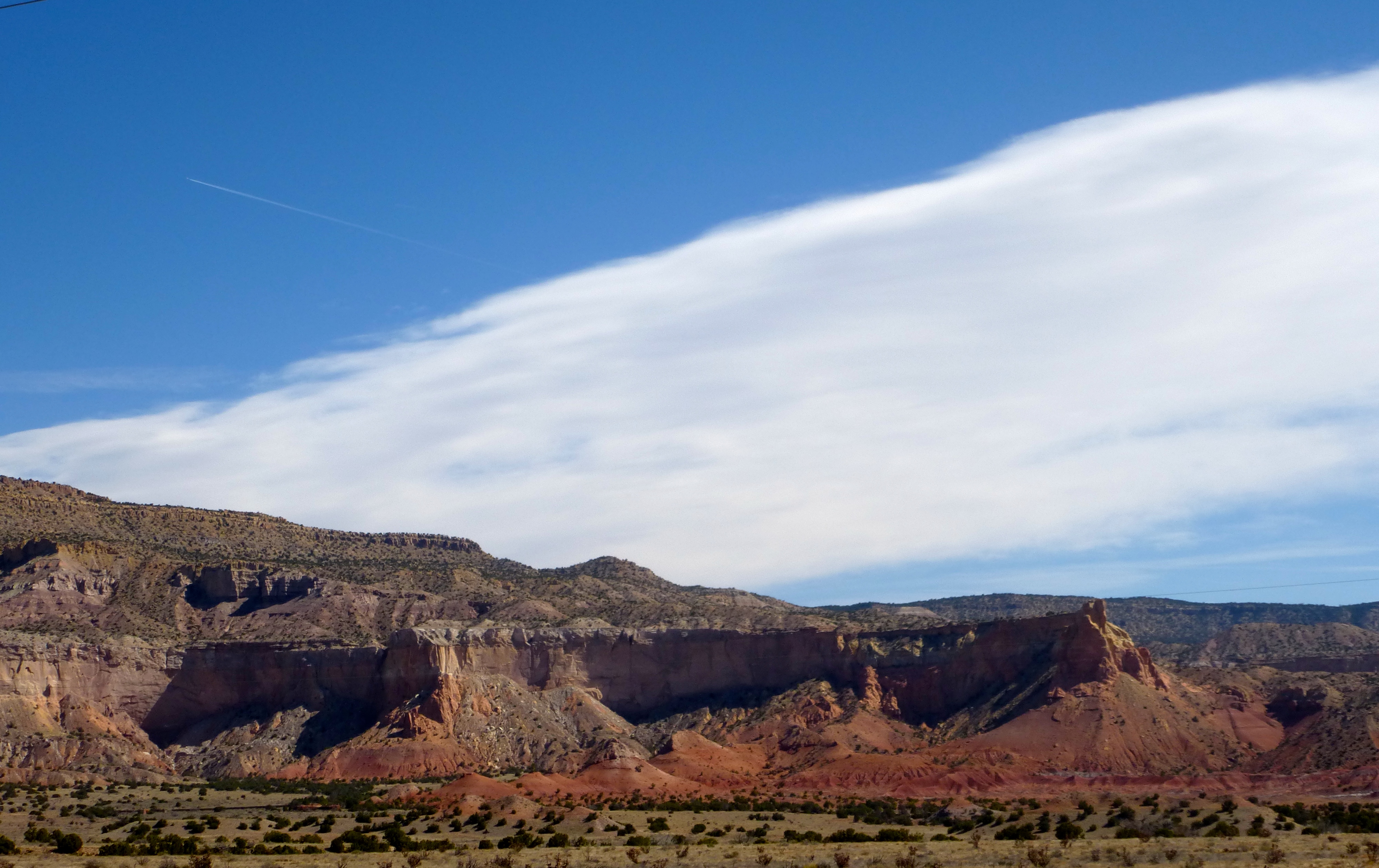 This is near the Ghost Ranch, a retreat and recreational center where you can stay cheaply, take horse rides or hikes into the desert, or just chill. Georgia O’Keeffe rented a place here when it was a dude ranch for rich folks (built in the late 1920s). She later bought her own place in nearby Abiquiú, where she moved for keeps after the death of her husband, photographer Alfred Stieglitz. Many of her paintings of the desert were made at the Ghost Ranch. 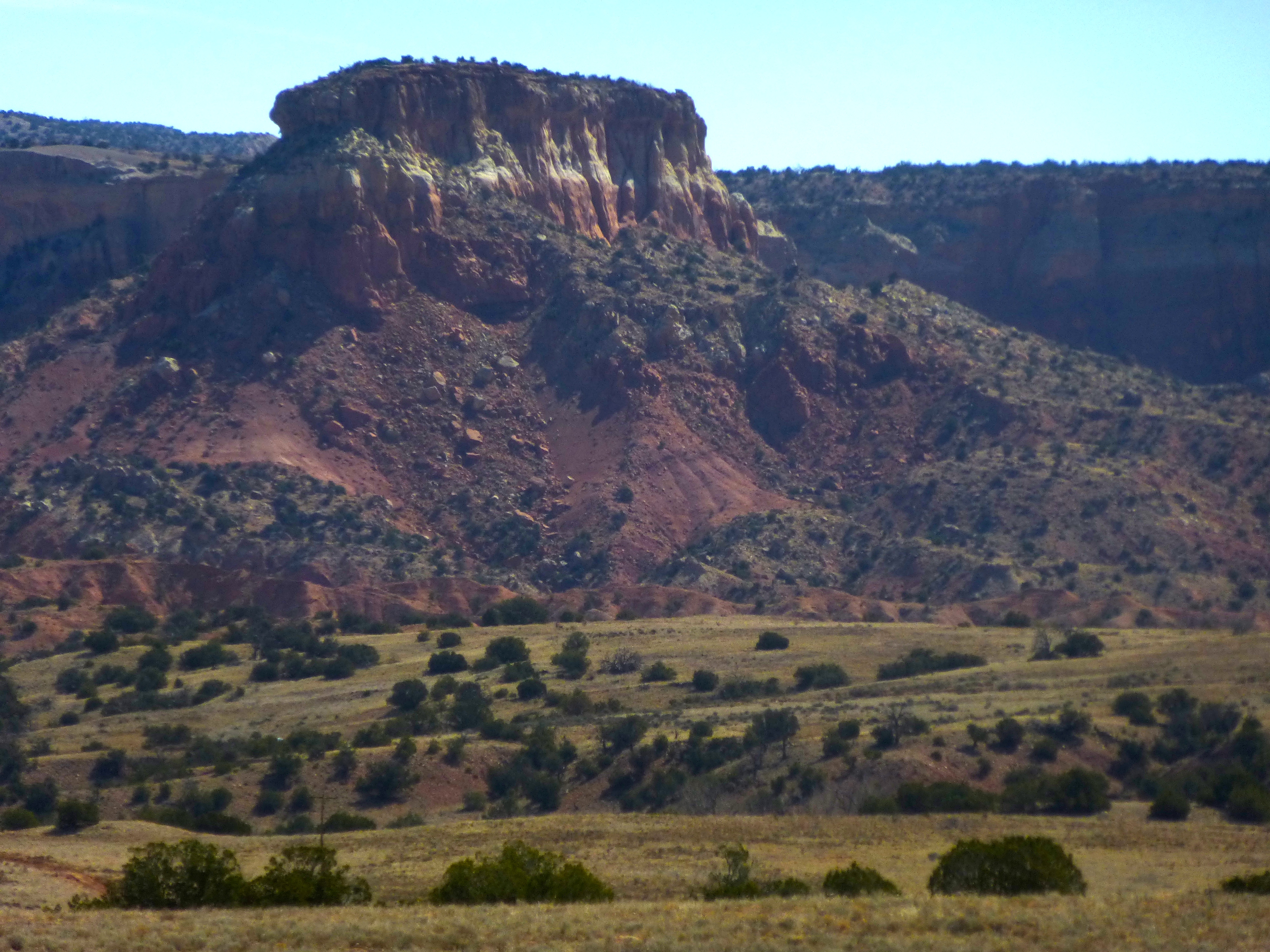 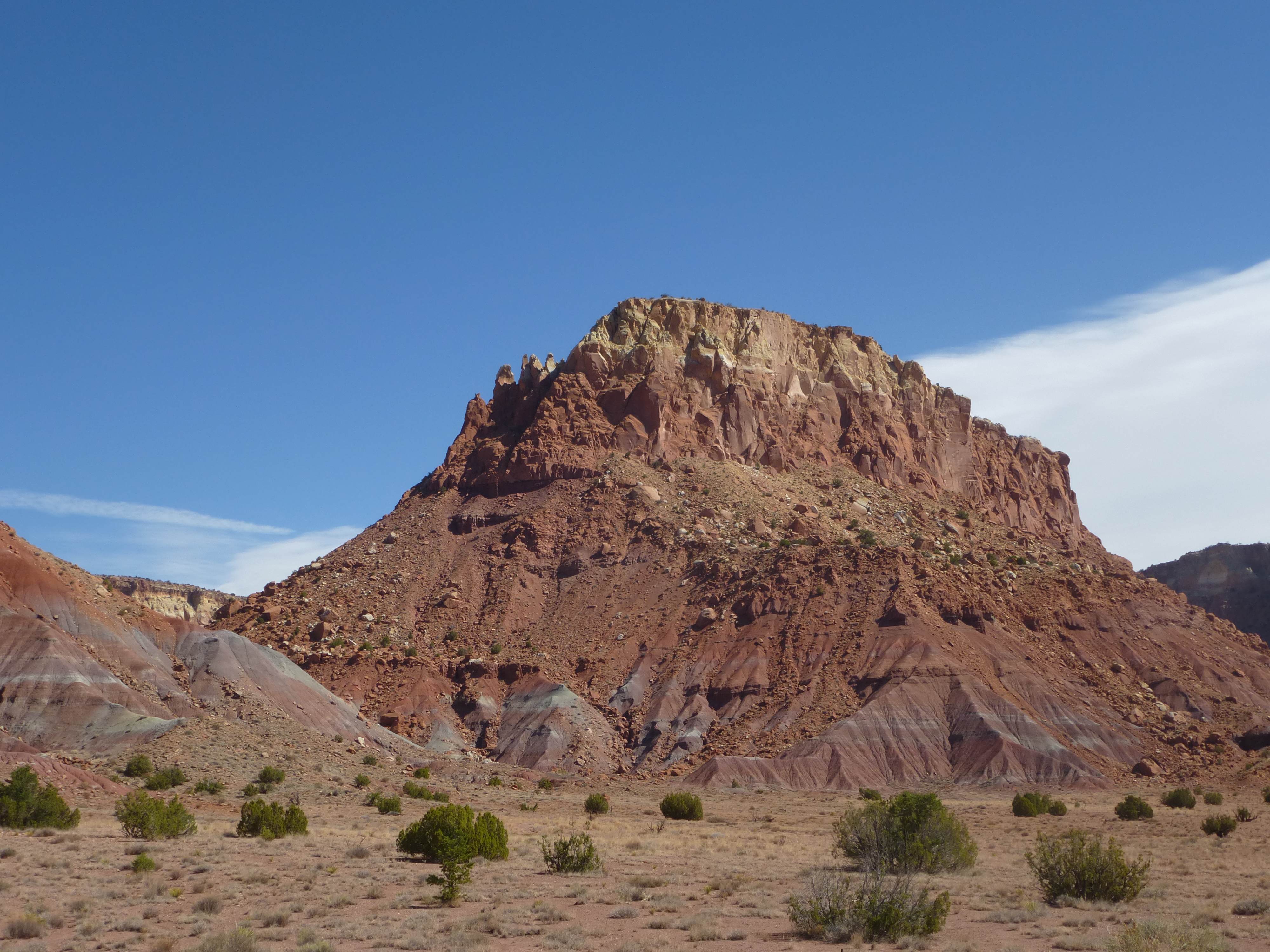 I drove into the tiny town of Abiquiú hoping to get a tour of O’Keeffe’s home and studio, but, sadly, I was there on a Monday, the one day when tours aren’t given. This is the thing I most regret about my visit here, but one miss isn’t too bad.

Her house is surrounded by a tall adobe wall, so this is the best view I could get. Pictures of the interior aren’t easy to come by (they want you to pay to see it, and tours aren’t cheap), but you can see some of the outside and inside here as well as via a Google image search here. 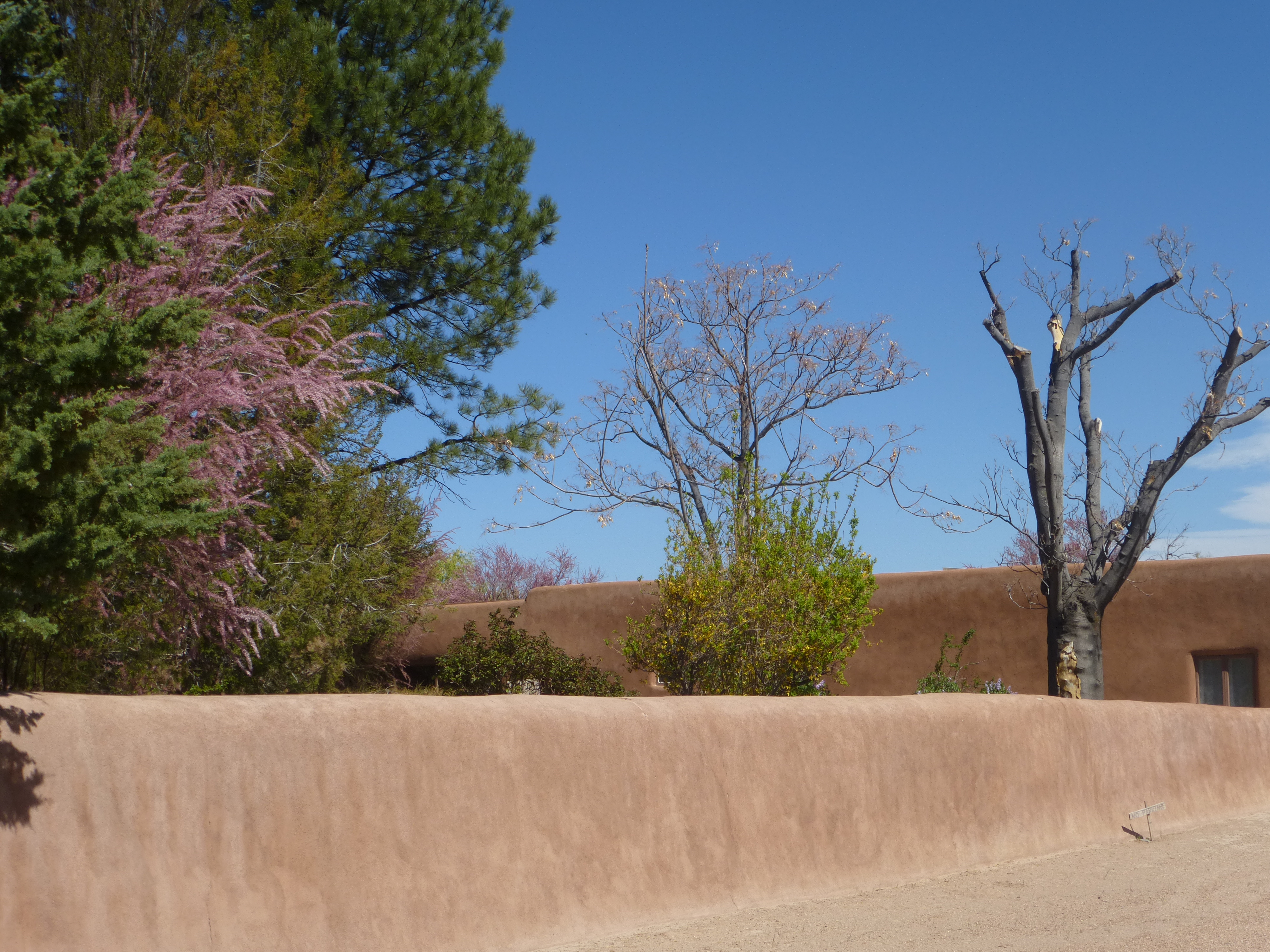 Sadly, I drove on, stopping for the day in the small town of Española.  I read on the Internet that there was a good restaurant there, and after a bit of searching I found La Cocina (“The Kitchen”). And it was good. 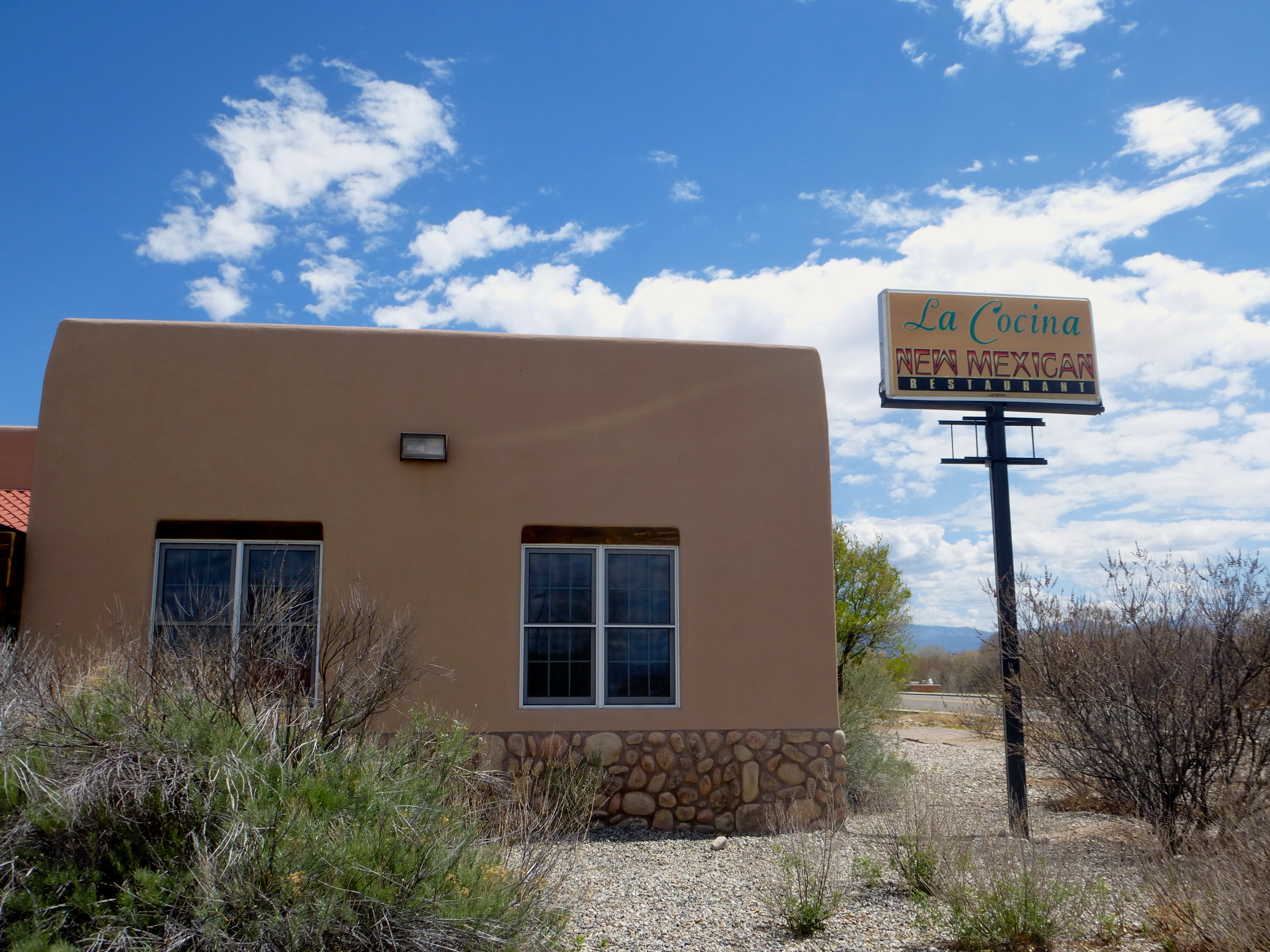 The menu had a lot of stuff on it, so I asked my waitress, who was really nice, what she’d recommend. She told me to get the guacamole and chicken tacos, which she said described as “da bomb” and her favorite dish there. For $9.75 you get “two grilled tacos served with chicken and guacamole. Topped with cheese, lettuce and tomato. Served with posole and beans on the side.” They also throw in a sopapilla, Hispanic fried bread which is traditionally served in this state with honey, either as an appetizer or as dessert (I had mine postprandially). It was delicious, tasting a bit like a churro.

Here’s my meal (squeeze bottle of honey to the left). There were also chips and salsa. 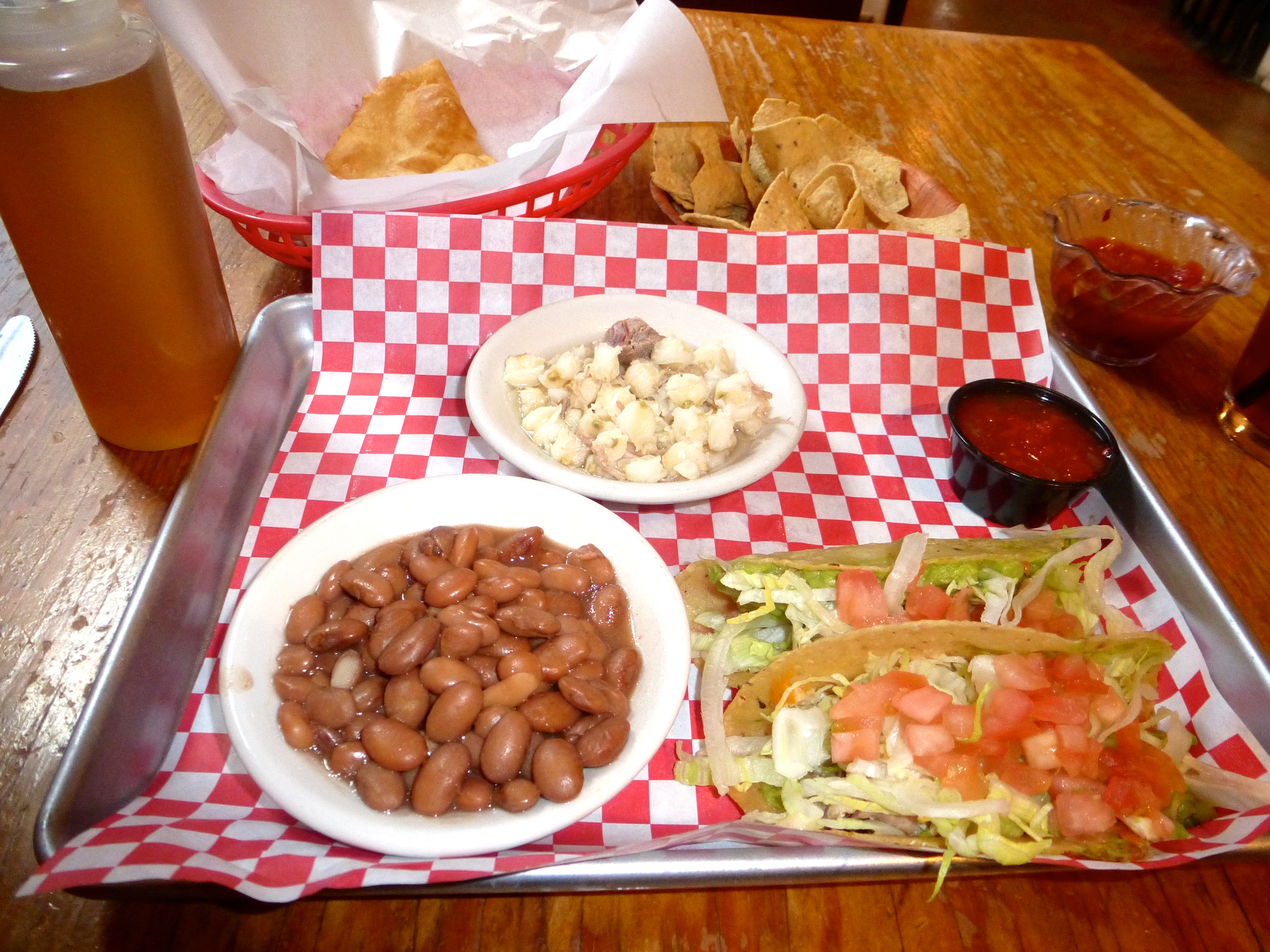 And the interior of the luscious soft tacos, brimming with fresh guacamole and big chunks of chicken. I recommend this place if you’re ever marooned in Española. 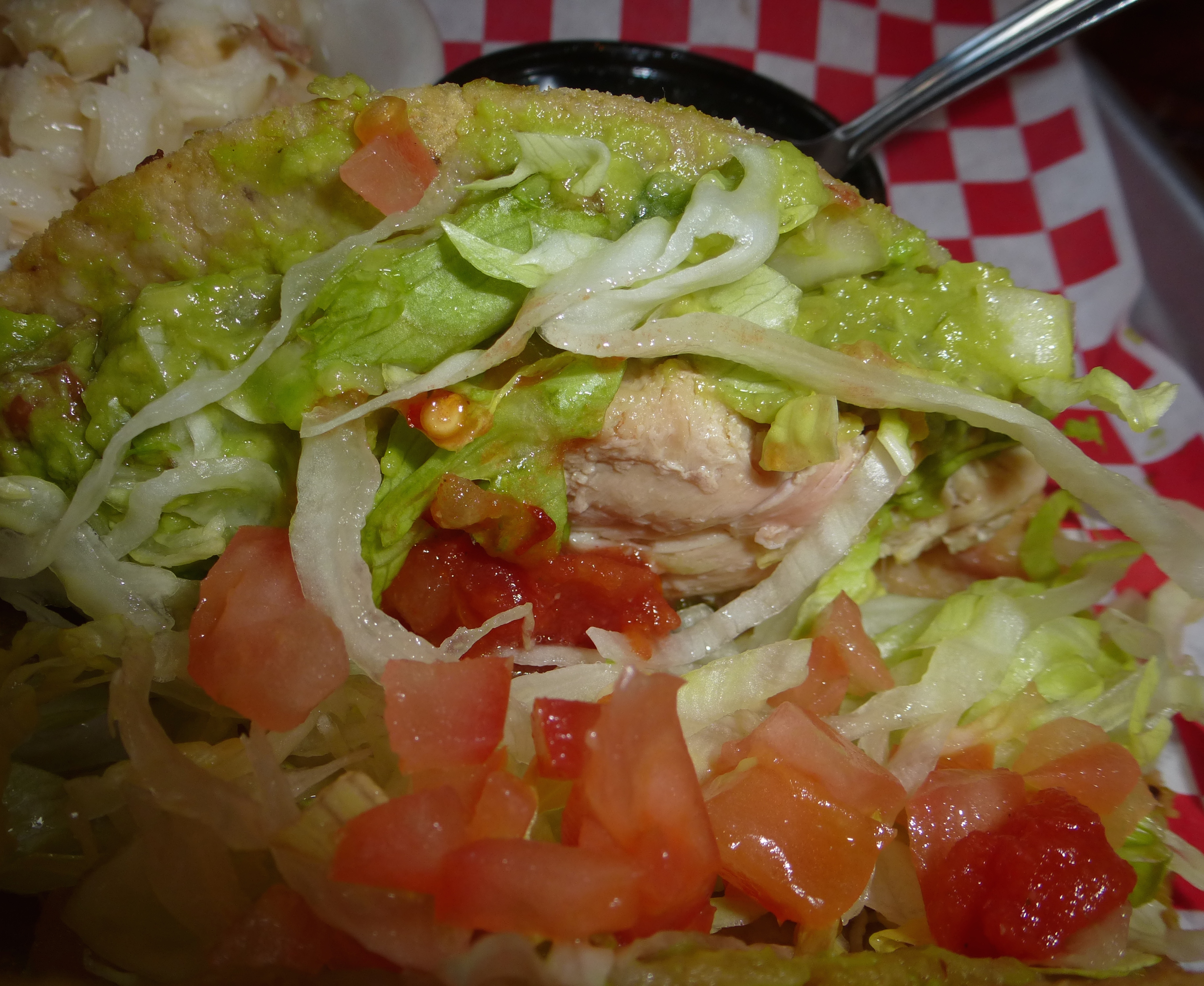 And the obligatory self-portrait in my motel room. 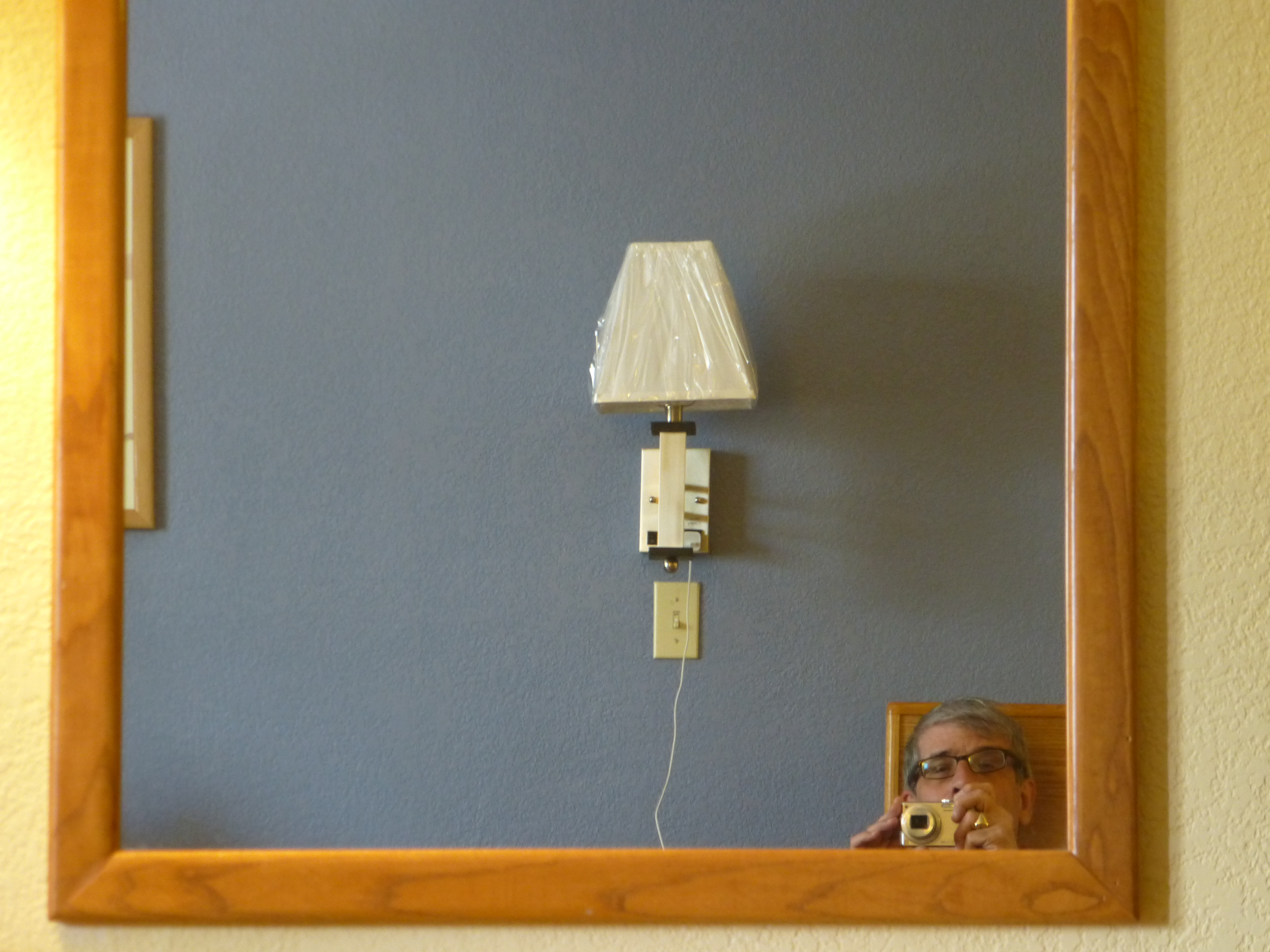 I have at least one more post to go, including the best burrito I’ve ever eaten and a visit to a stunning local Indian petroglyph site, so stay tuned.

43 thoughts on “Taos to Española”