Yesterday I visited the Honolulu Aquarium, which, though small, has an amazing collection of corals and tropical reef fish. I’ll put photos from that visit separately, as their inclusion would make this post too long. Instead I’ll write briefly about everyone’s favorite topic: food.

On Saturday we were invited to the homes of locals who read this website: two scentists whose names give them the acronym of HoHum.  We had a great time, and the dinner they served us was perhaps the best meal we’ve had on this island, restaurant or not.

Here are HoHum in a postprandial photo. On the table is the Shaker lemon pie I’ll show below. They live in the hills above Honolulu with their two cats, and a passel of bicycles and surfboards. 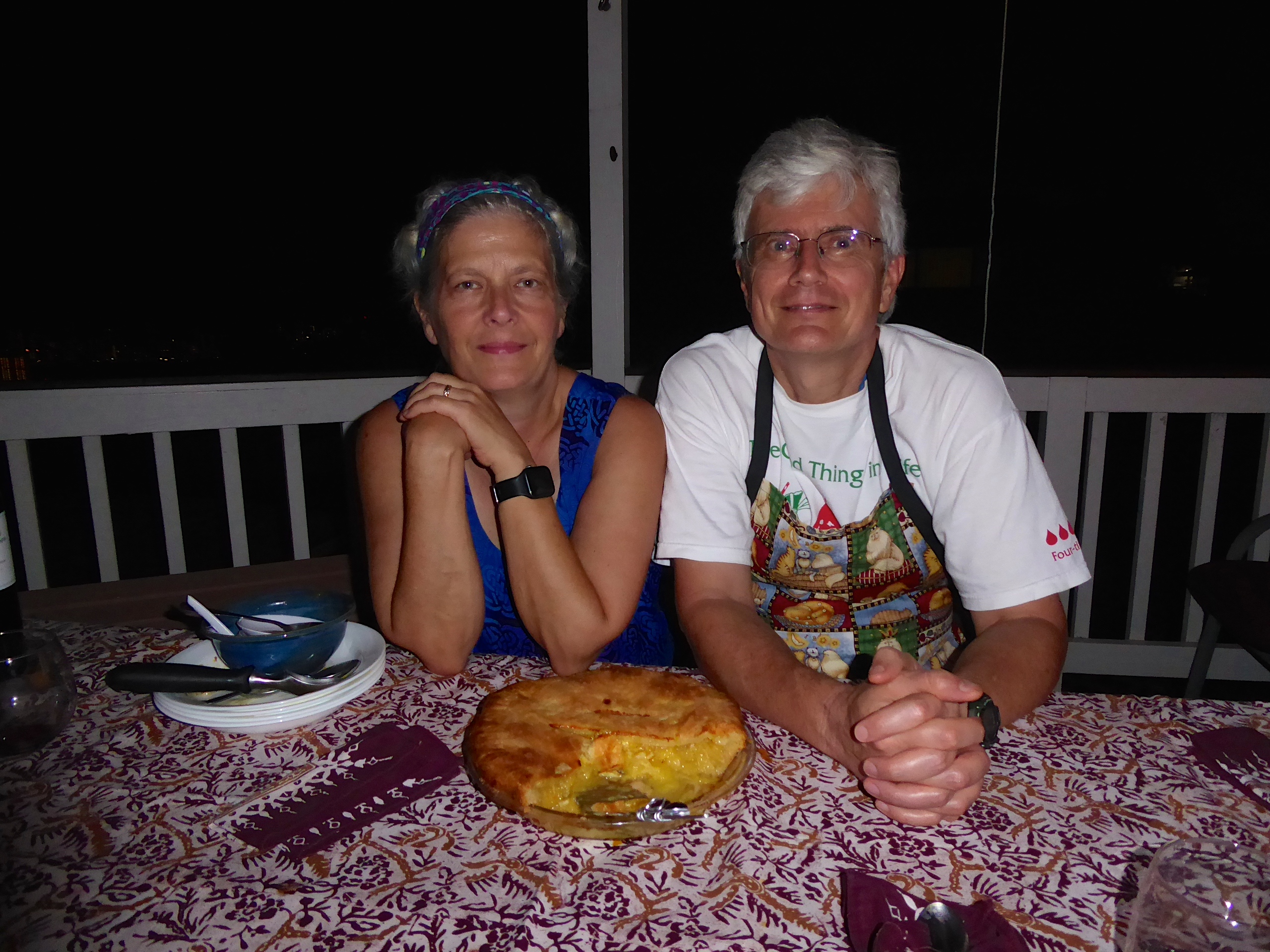 This is the cat named Eddy, so called because of their oceanographic interests (see below): 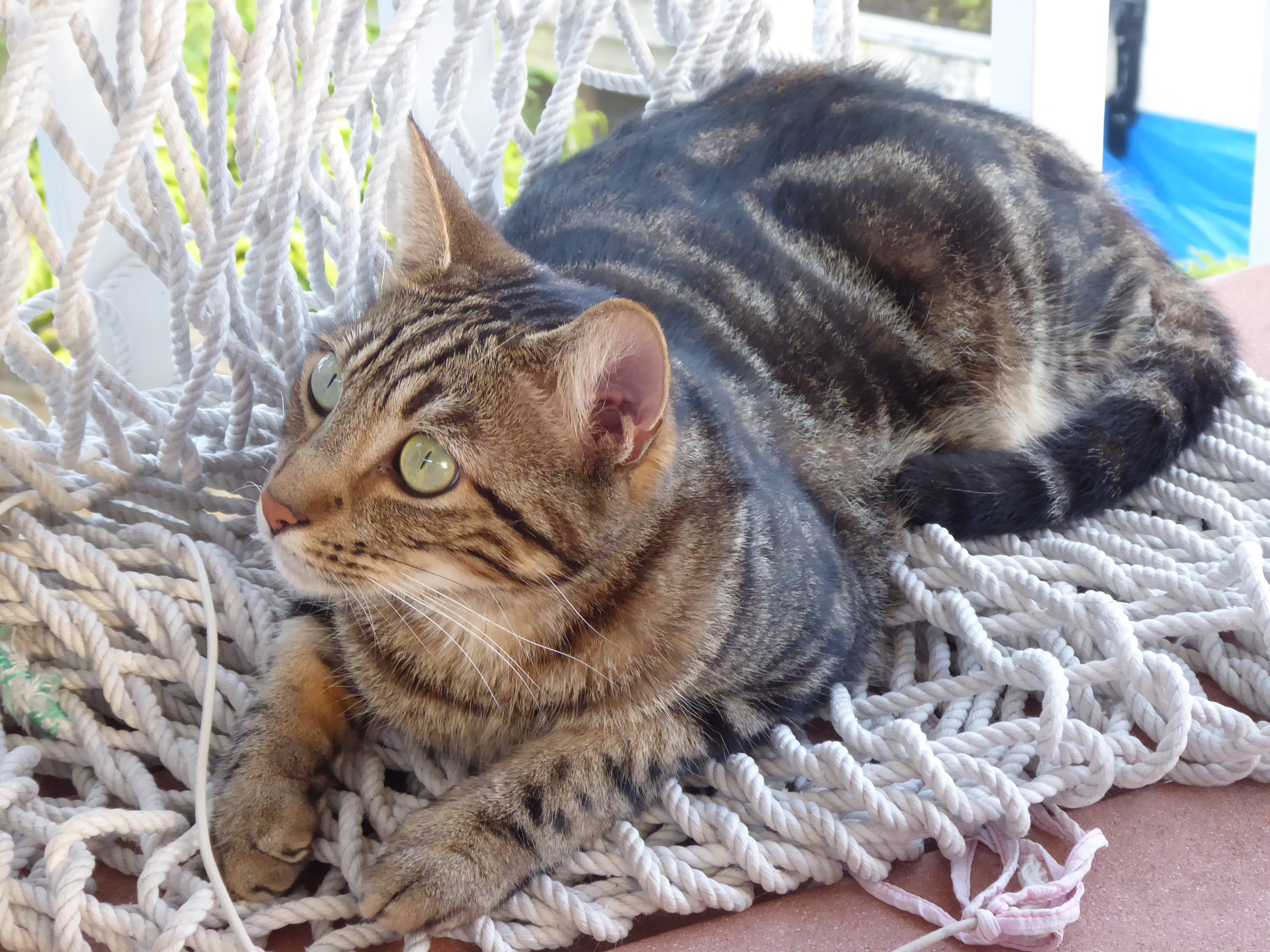 The patterns on Eddy (a beautiful blotched tabby) resemble ocean currents, as you see. Eddy’s favorite thing is to be whacked firmly with an open palm (not petted) on his back. This penchant is, as far as I know, unique to this cat.

Here is the picture I was given to explain Eddy’s name: 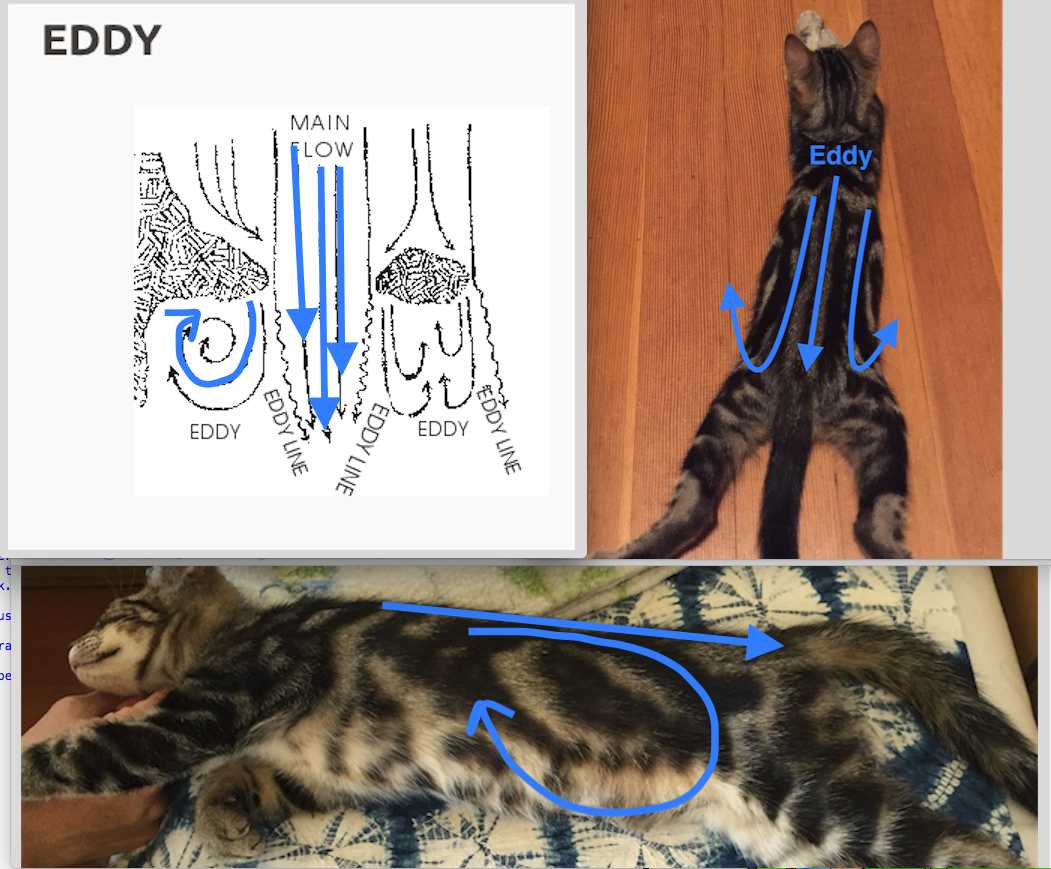 The other cat is named Ludwig, after Beethoven. He’s a white cat with blue eyes, and that indicates that he’s likely to be deaf, which he is (Darwin mentioned this phenomenon in his book The Variation of Animals and Plants under Domestication).  The link just mentioned says that between 56% and 90% of blue-eyed white cats are deaf, probably due to the absence of hair cells in the cochlea of the inner ear—the cells that translate vibrations into electrical impulses that go to the brain.

I asked how Ludwig knows when it’s dinnertime since he can’t hear, and apparently he can detect vibrations like foot-stomping, and also has a good sense of timing for meals! 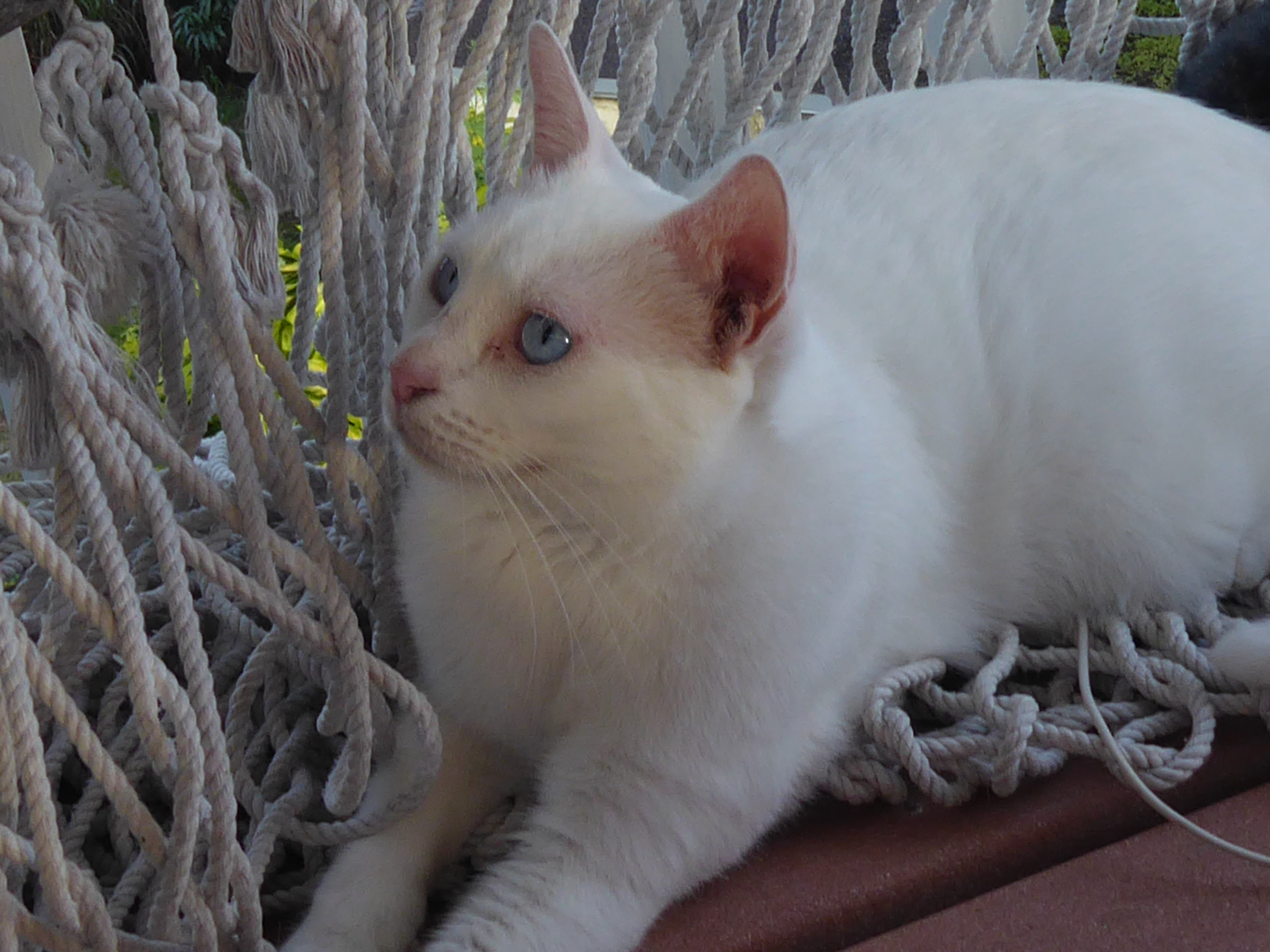 The view of Waikiki and Diamond Head from up on the hill near the HoHum abode. 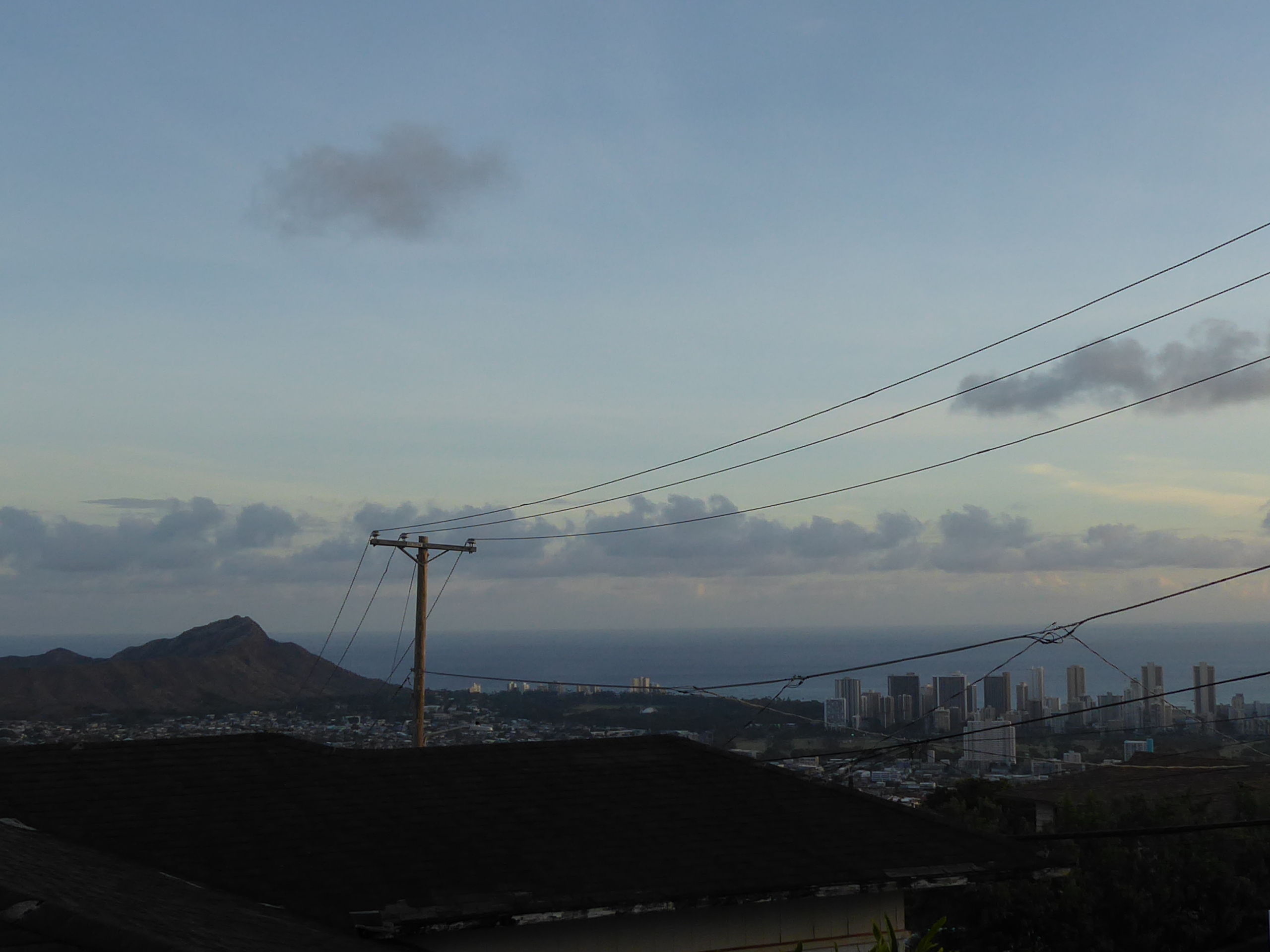 A view of Diamond Head, without obstructing wires, from further down the hill. 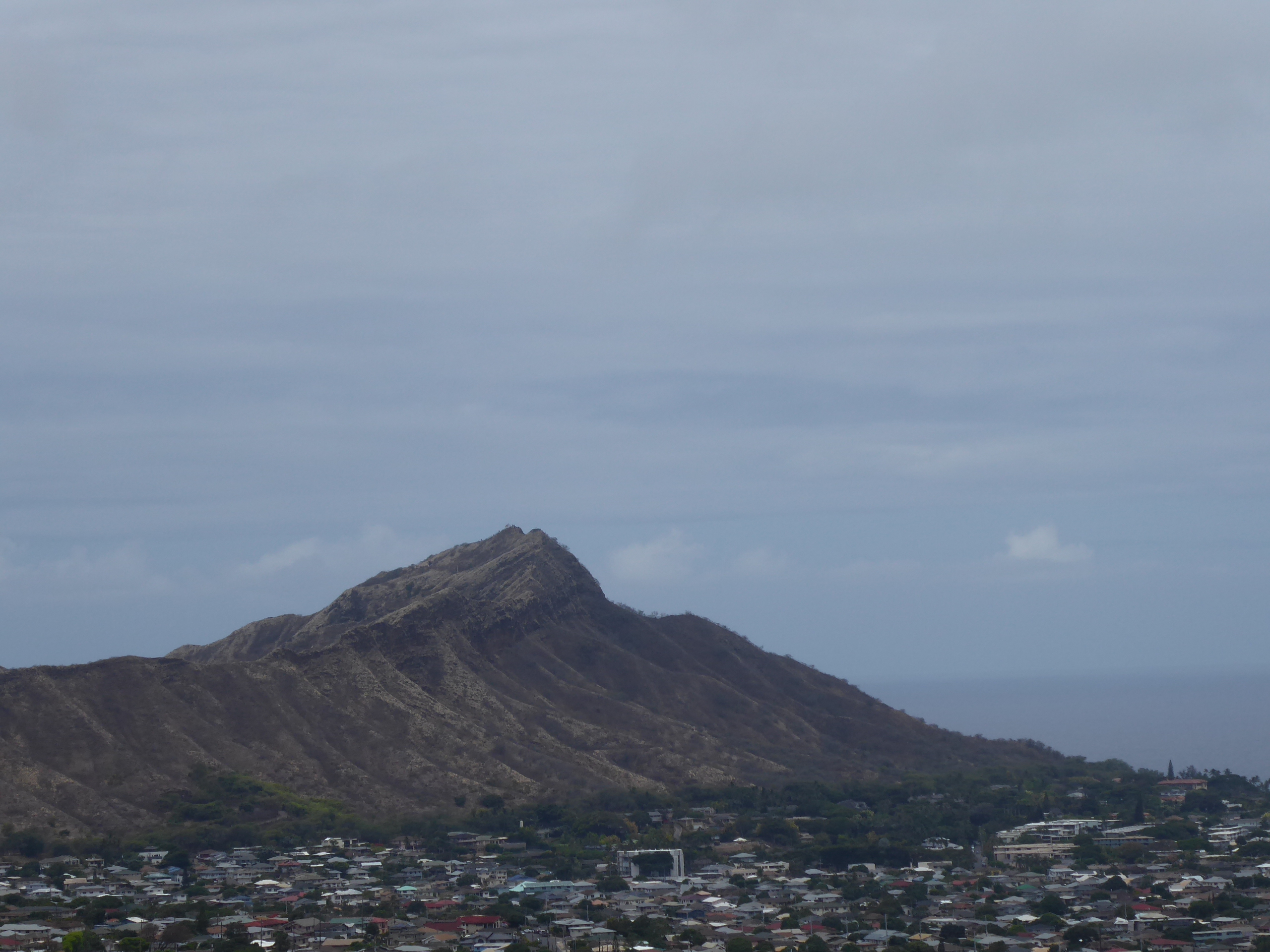 As I said, dinner at Chez HoHum was fantastic. We started with an amuse-bouche that they acquired from working on the island of São Tomé, where I also used to work. One puts a fresh peppercorn, a bit of minced ginger, and some local chocolate in one’s mouth all at once, getting an explosion of flavors: spicy, sweet, and gingery. A good start! 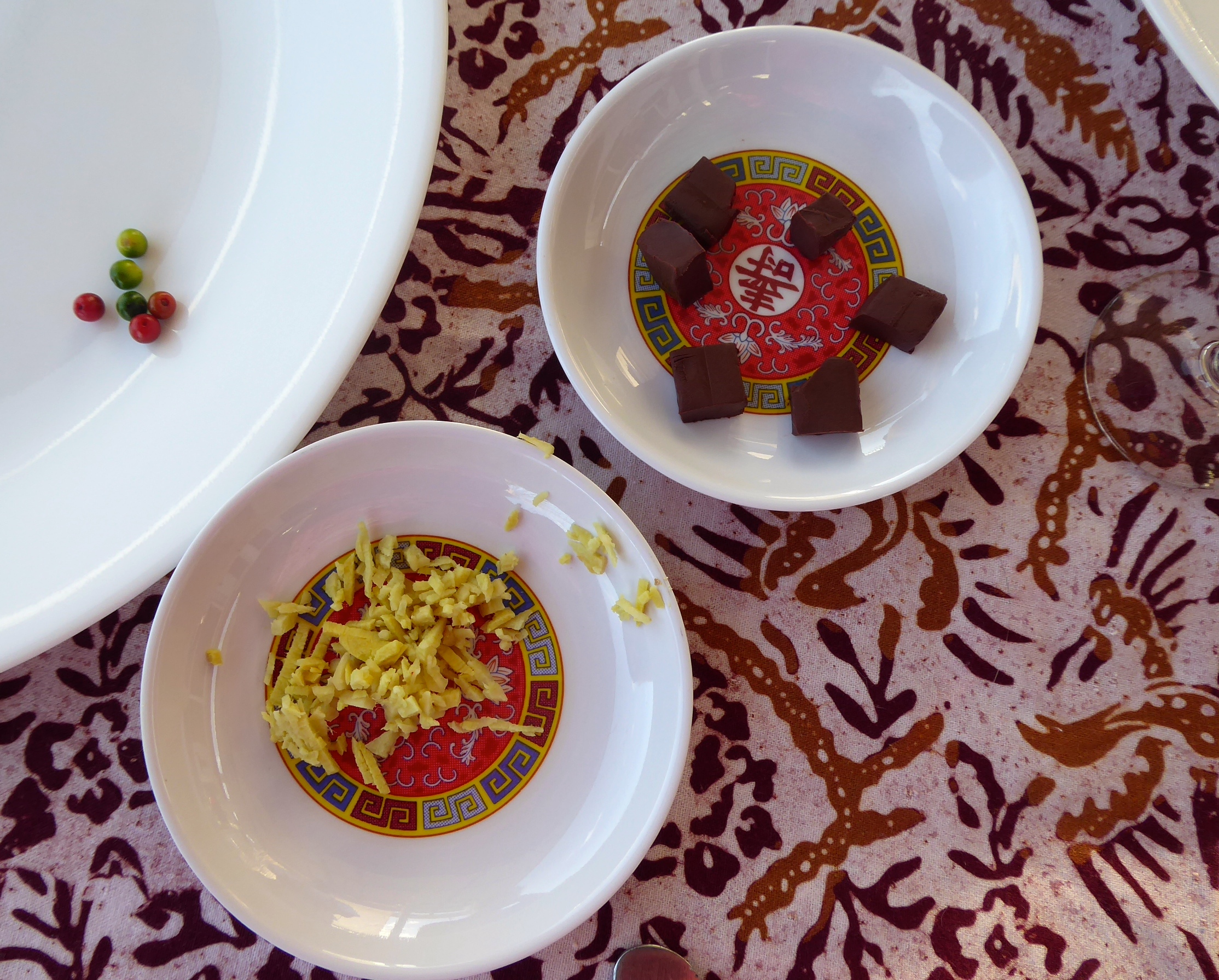 The main course was an African-influenced dish: chicken, eggs, shrimp, okra and many other things in a peanut sauce. The recipe, I was told, came from the cookbook Ginger East to West. 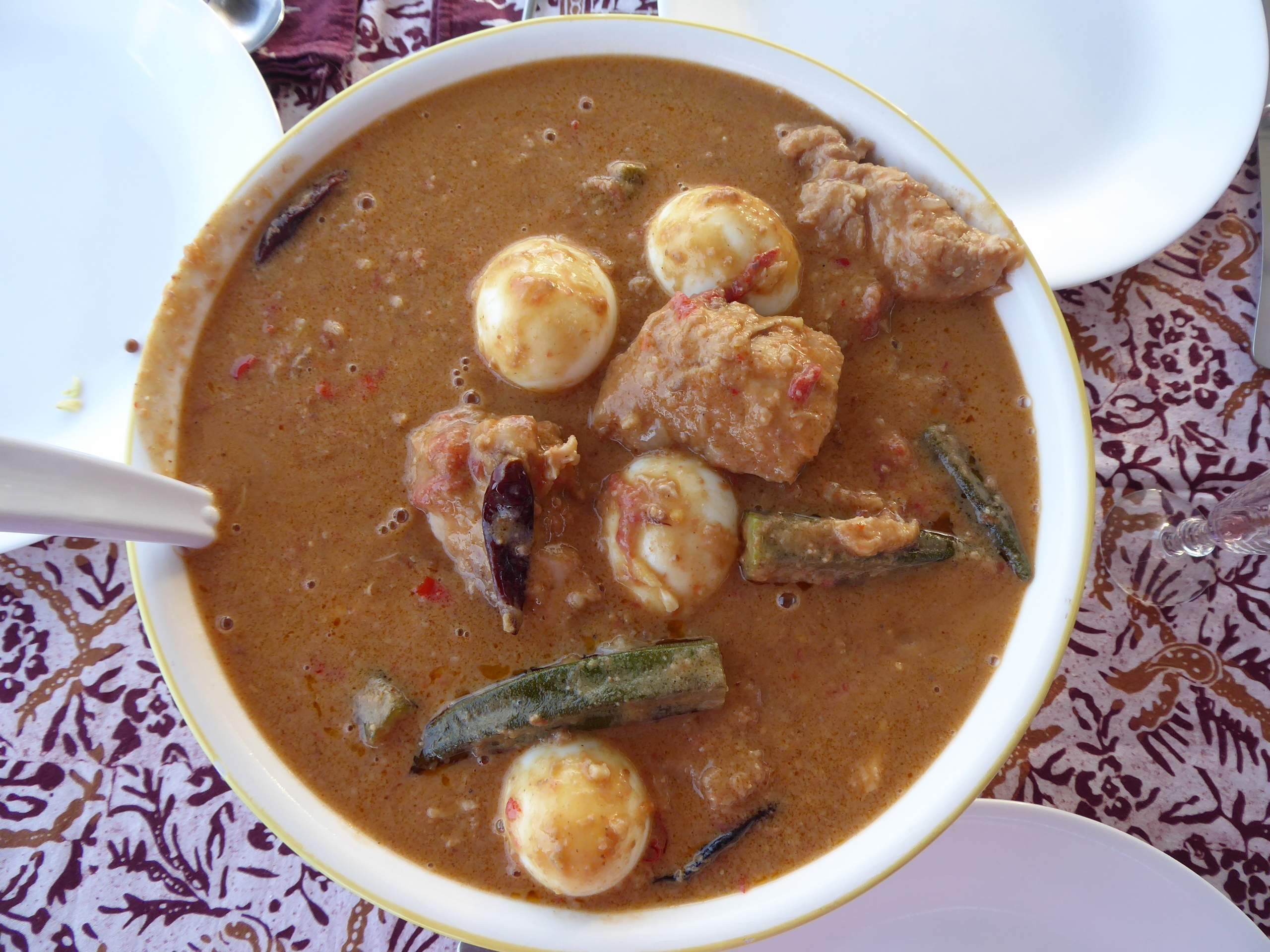 The dish was accompanied by these garnishes, shown in the photo below:

There was also homemade bread: 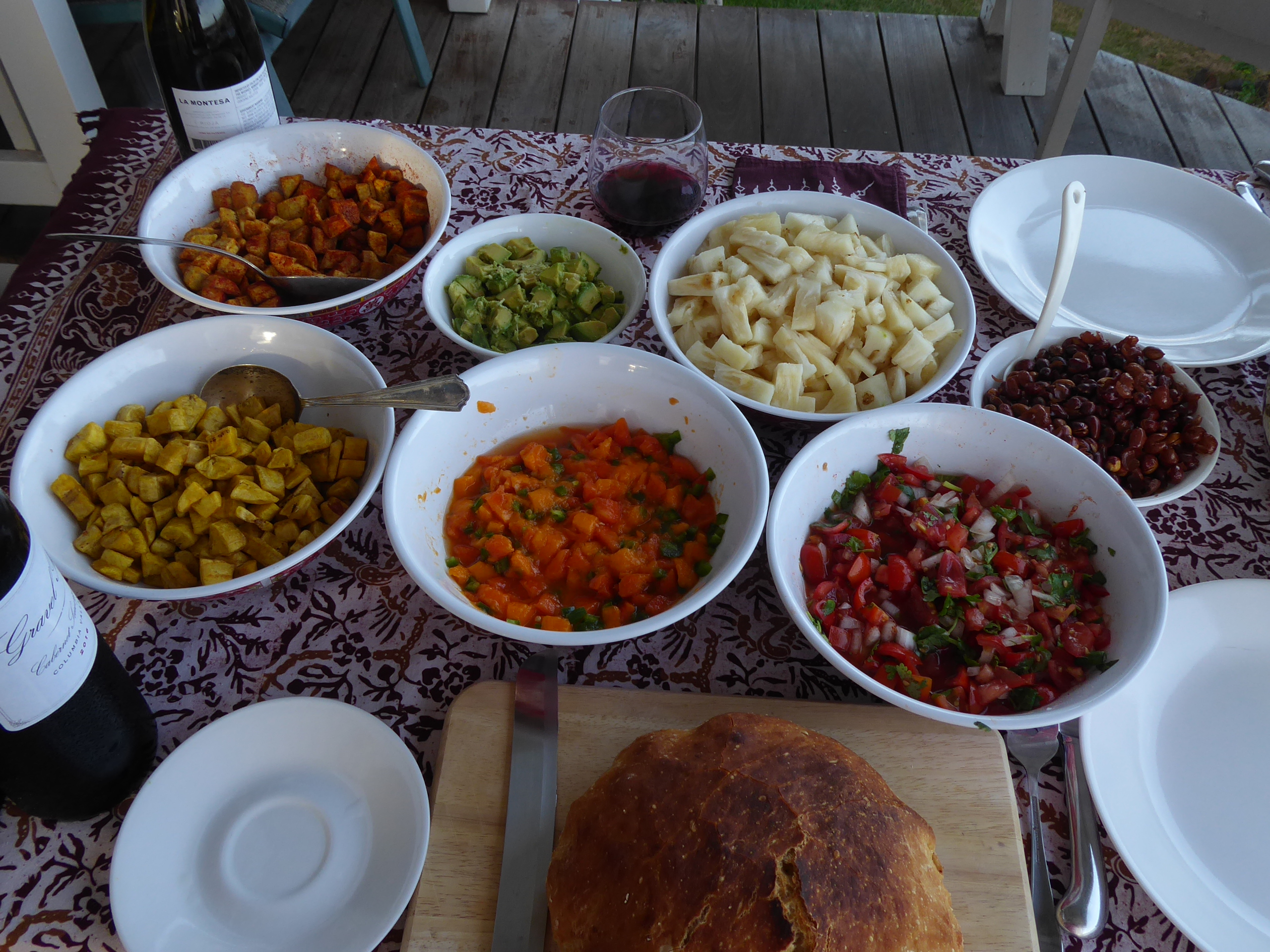 You take a plate of the main dish (I had two helpings) and surround it with the garnishes, mixing them in at will and then mopping up the sauce with the bread. Yum! 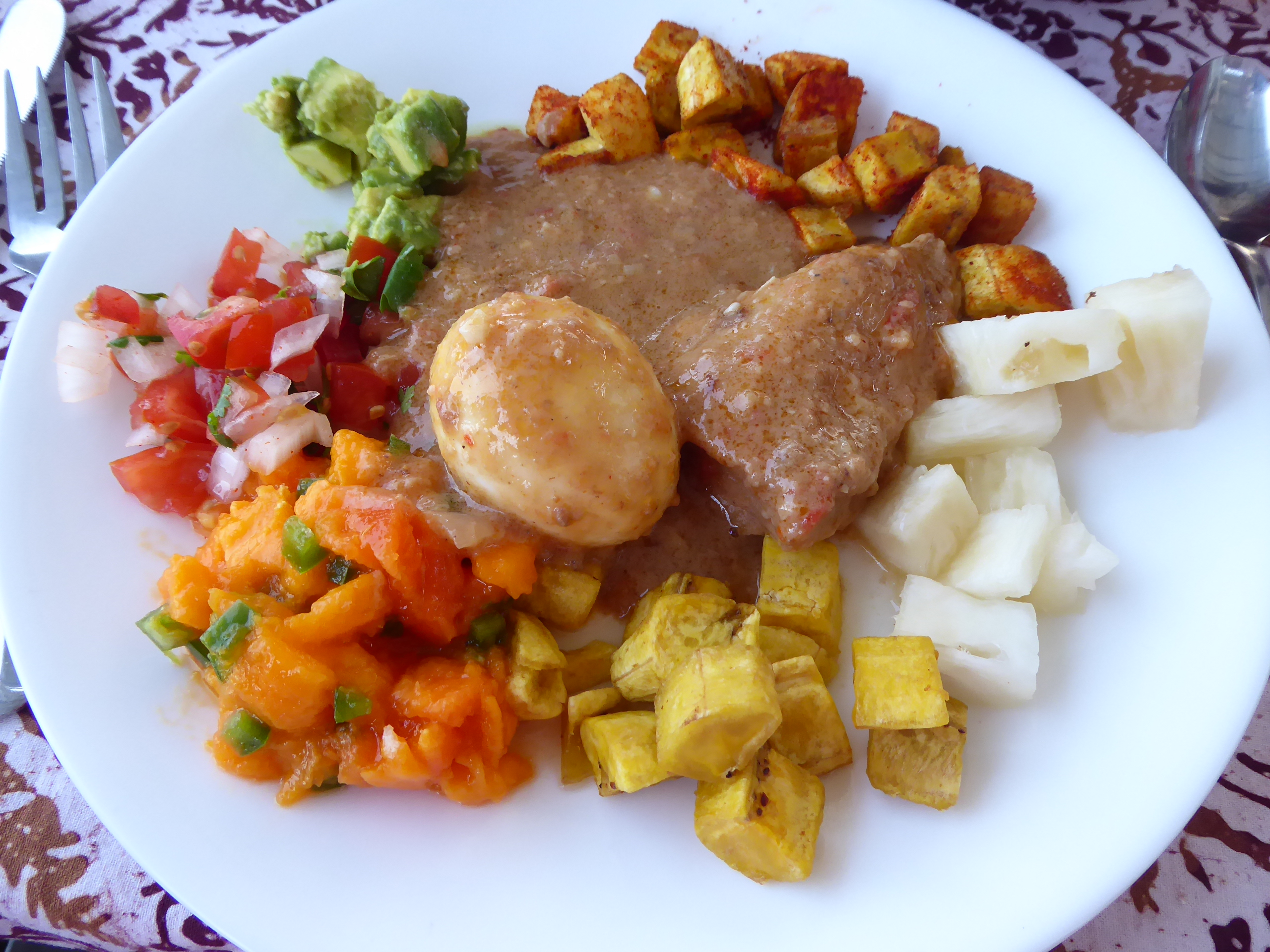 Dessert: Homemade Shaker lemon pie (I believe the only ingredients of the filling were lemons from the HoHums’ tree, sugar, and butter), served with vanilla ice cream and fresh mango. A fantastic dessert. 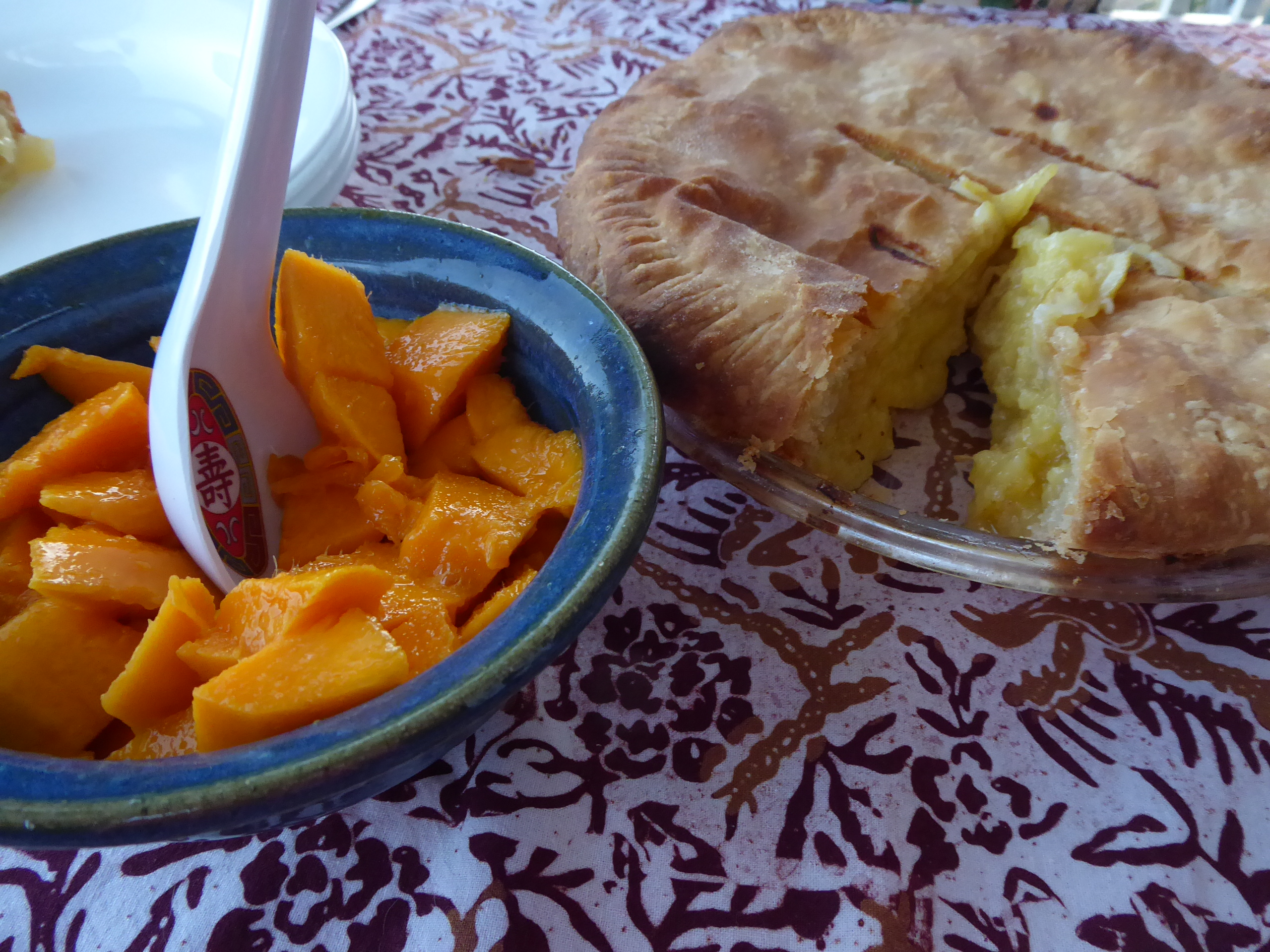 The next meal was at the Side Street Inn on Kapahulu Avenue in Honolulu (there are two), famous as a local spot that serves up huge portions. In fact, the portions were so large that two of us ordered only one main dish (their famous boneless garlic chicken) and a “farmer’s salad” with dried taro, shrimp, and avocado. Even so, we didn’t finish the chicken, which was brought home for the evening repast: 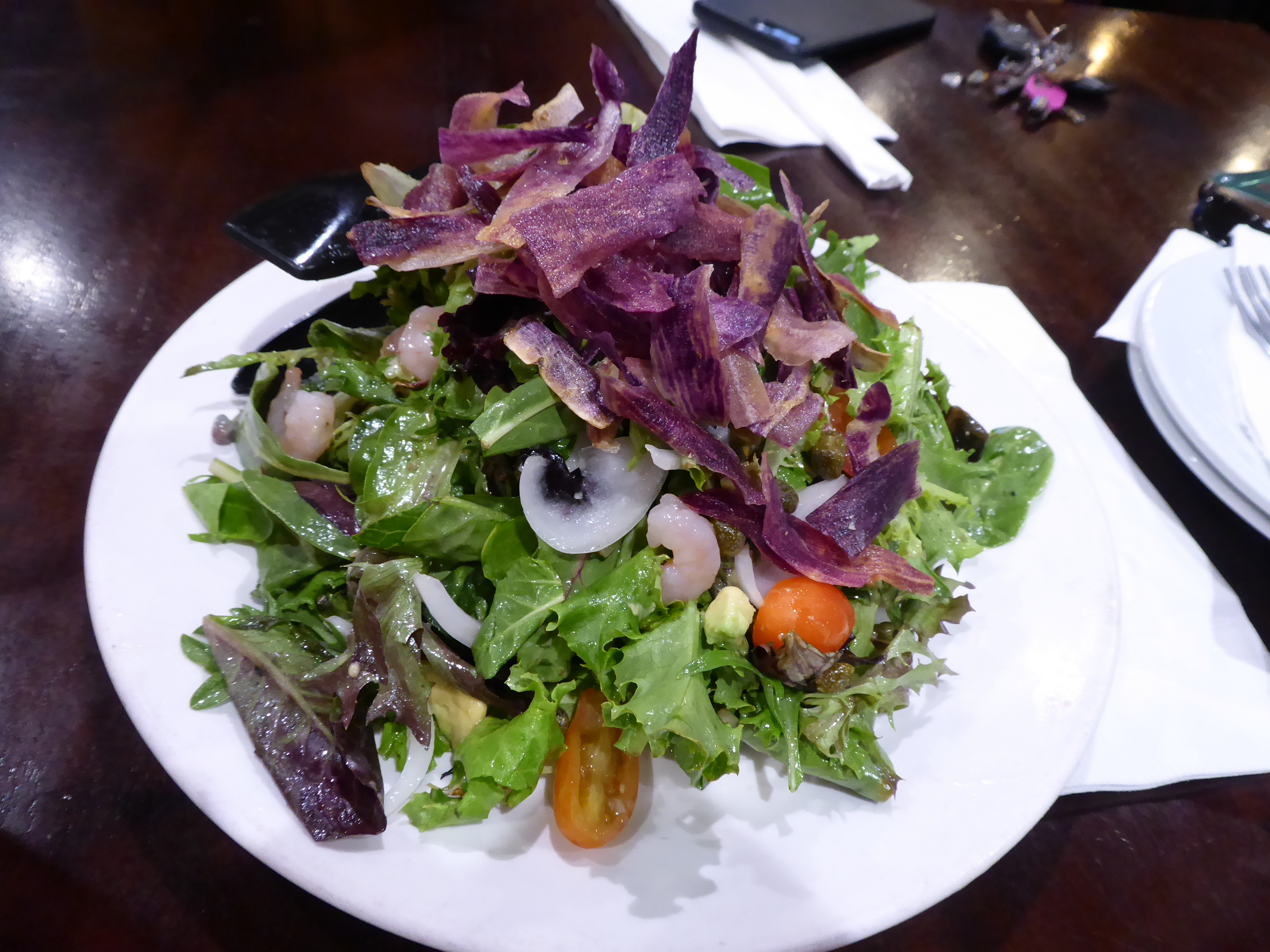 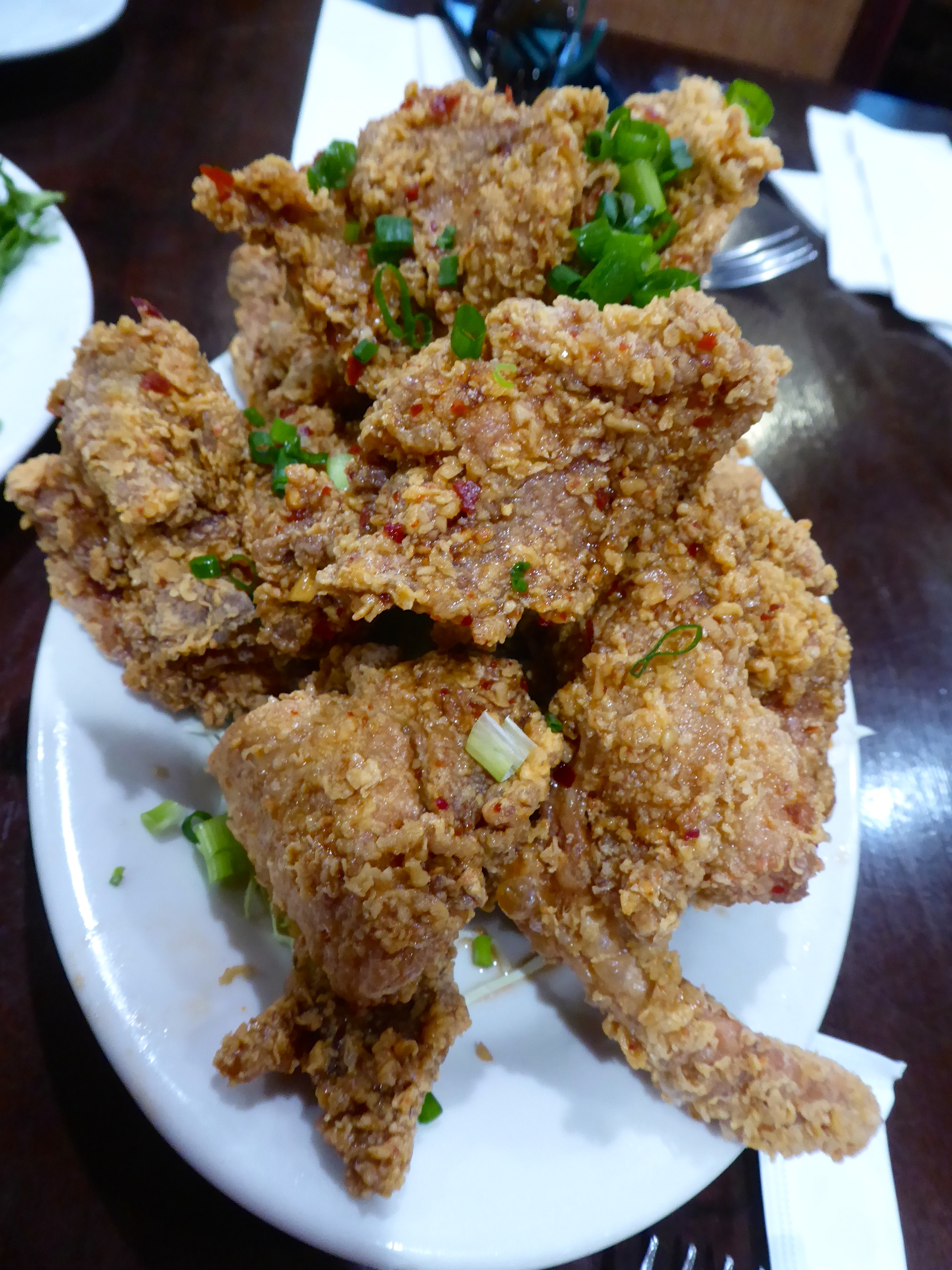 There was a party in the back room of the Side Street. I’m not sure what was being celebrated, but it was nice to see the locals decked out in their Hawaiian shirts and leis. 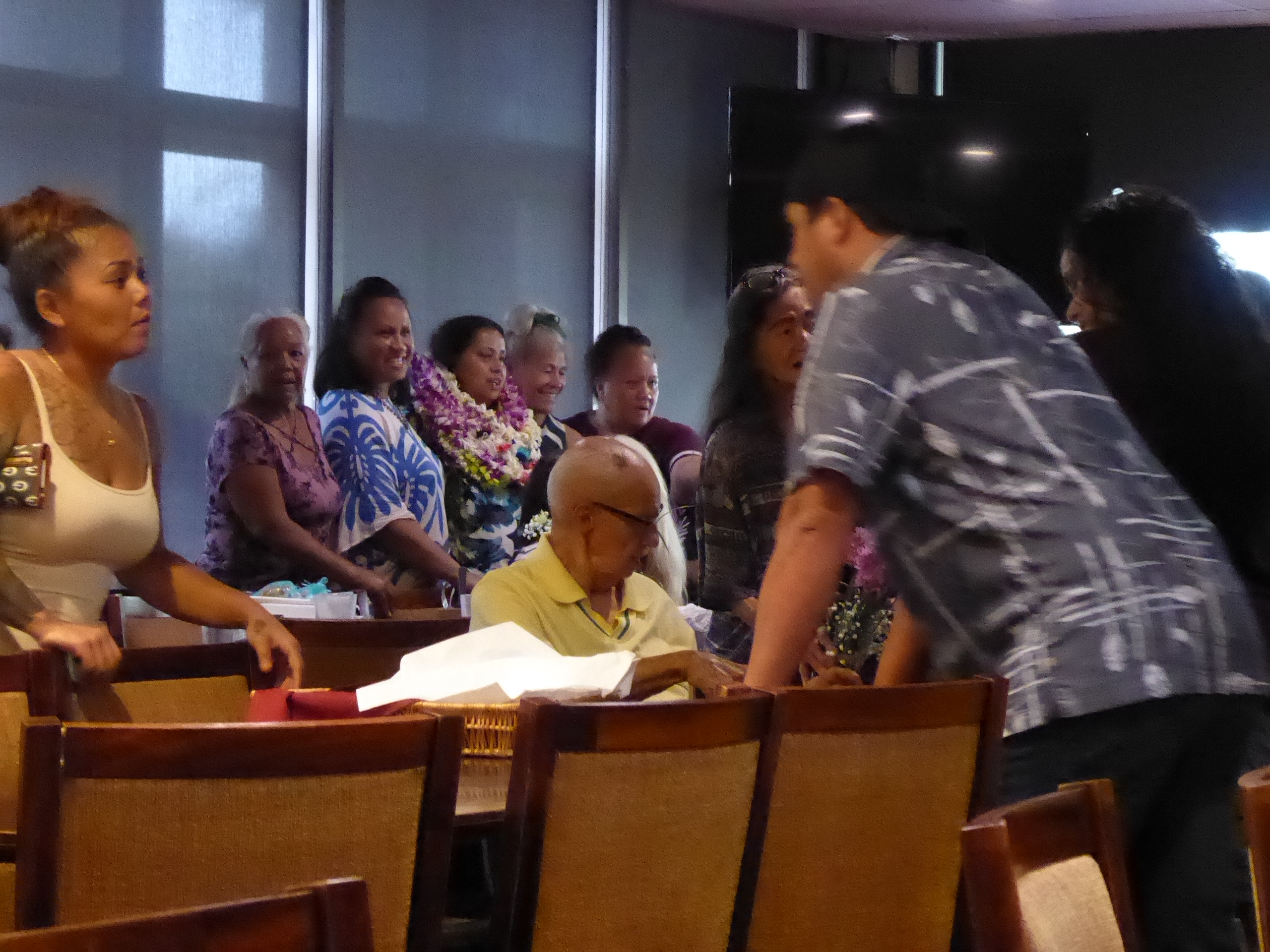 This woman may have been the object of the party. She’s festooned with so many leis that they rose over her chin! 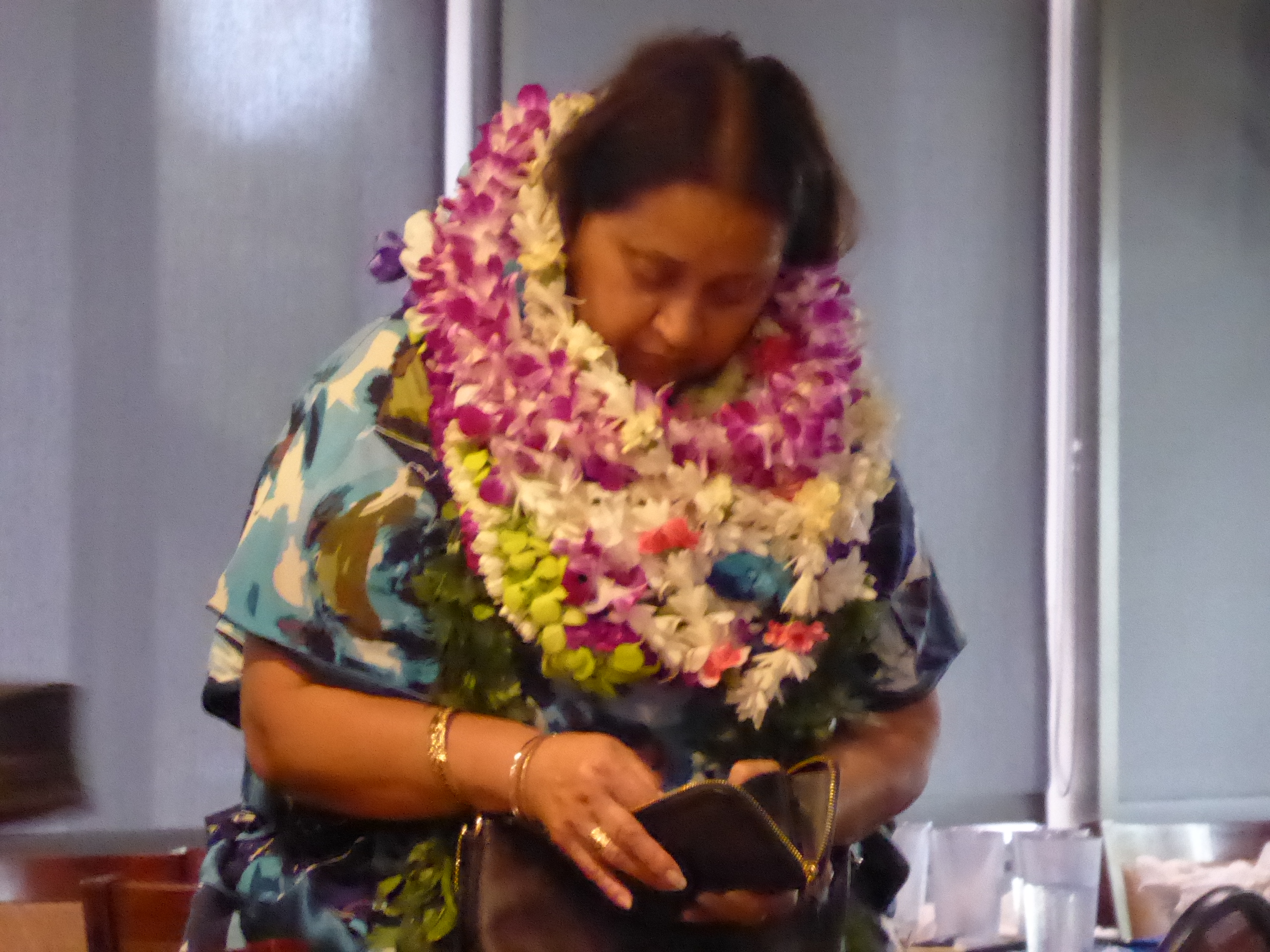 Lunch yesterday was at the Shirokiya Village Walk: a Japanese food court in the ritzy Ala Moana shopping mall. There are dozens of food booths from which to select a meal. We had a bento box and a serving of udon noodles with tofu and a side of tempura vegetables. I recommend this place if you want a quick meal of good Japanese food in Honolulu, and parking at the mall is free. (Parking is a general problem all over Oahu.) 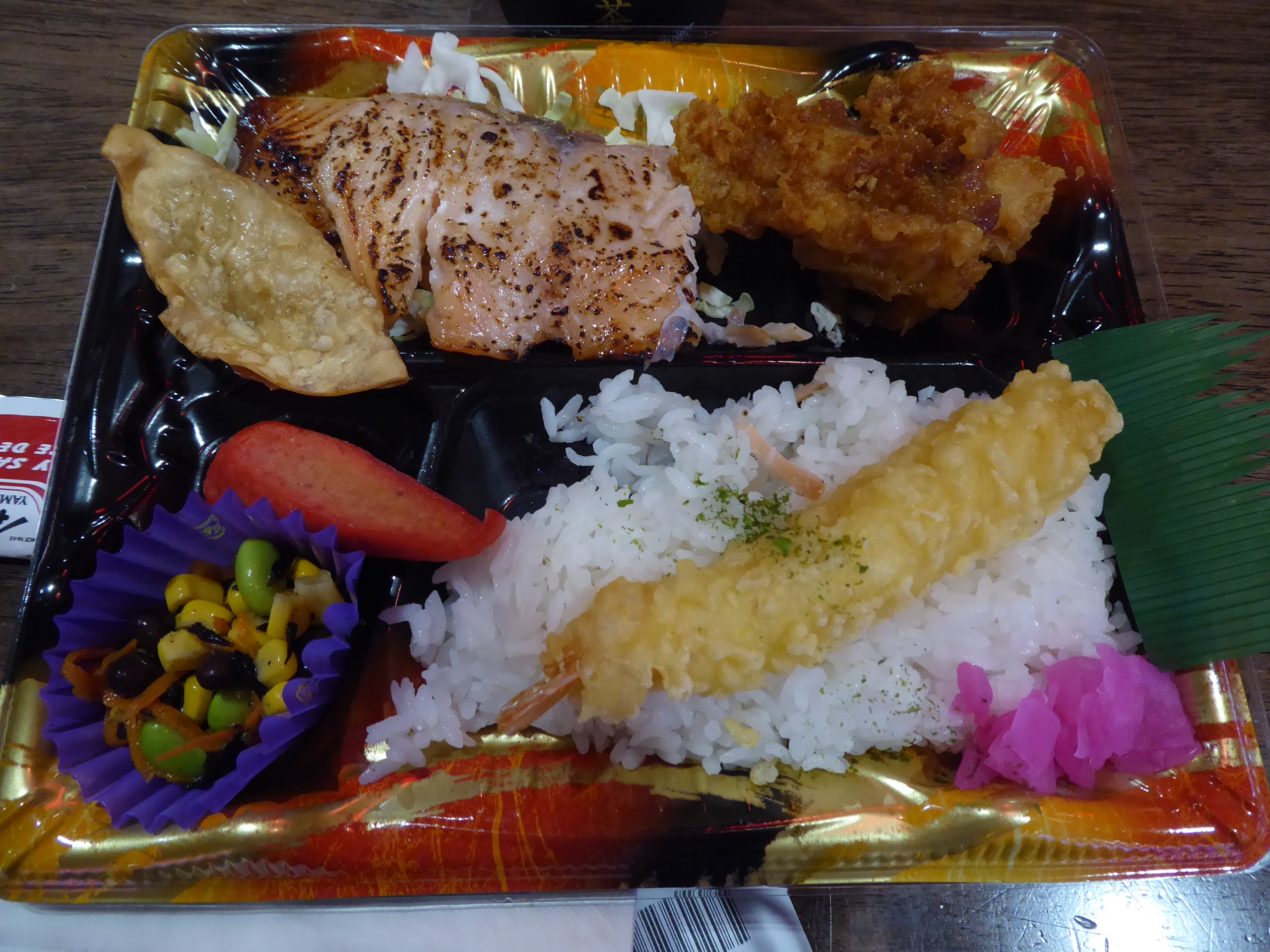 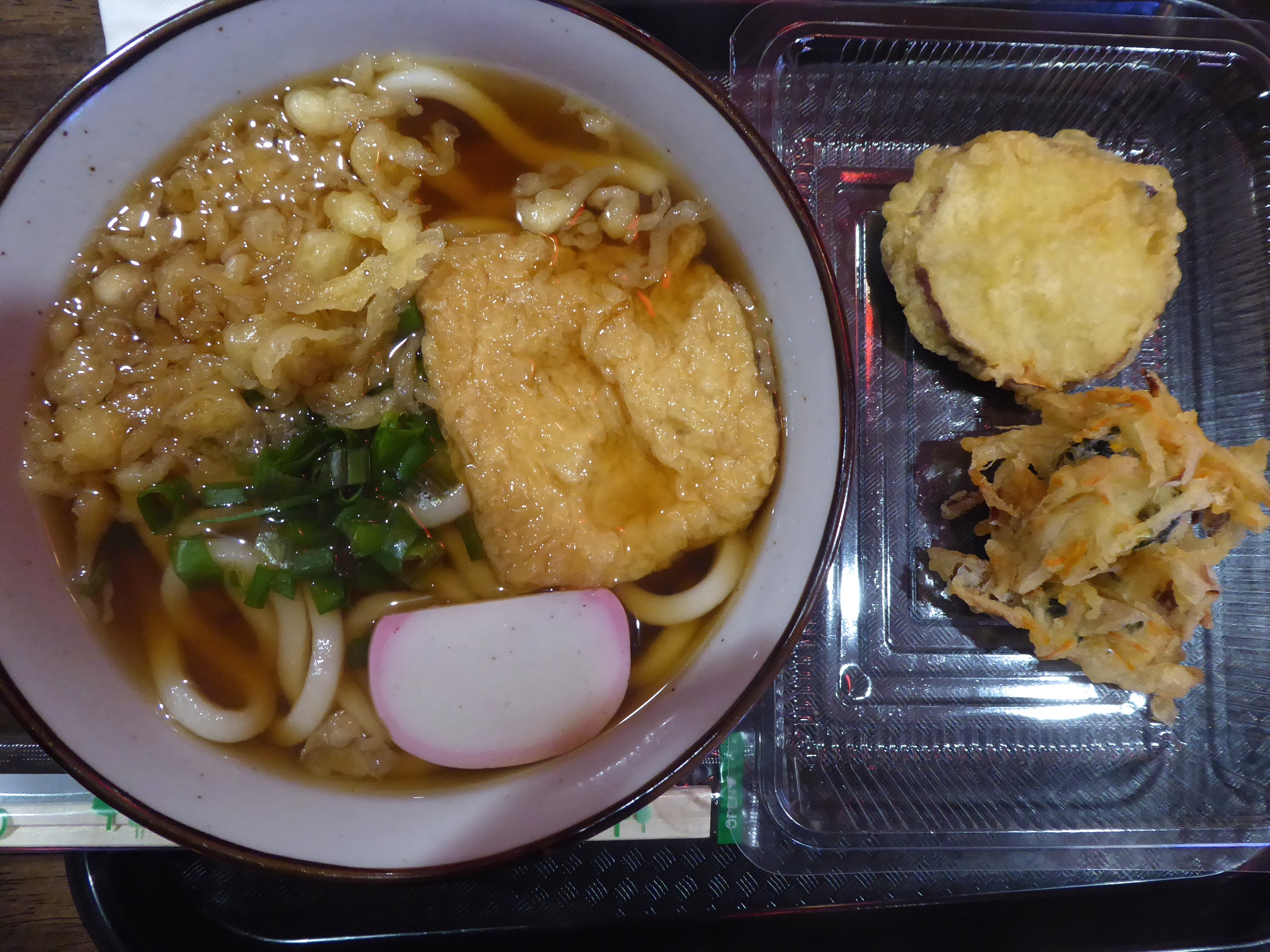 My cat BFF Pi was getting shaggy after his recent “lion cut” shave, and it was hot and muggy, so yesterday morning we shaved him again. He rebelled a little, struggling and meowing softly, but took the cut pretty well. Here he is post-shave: 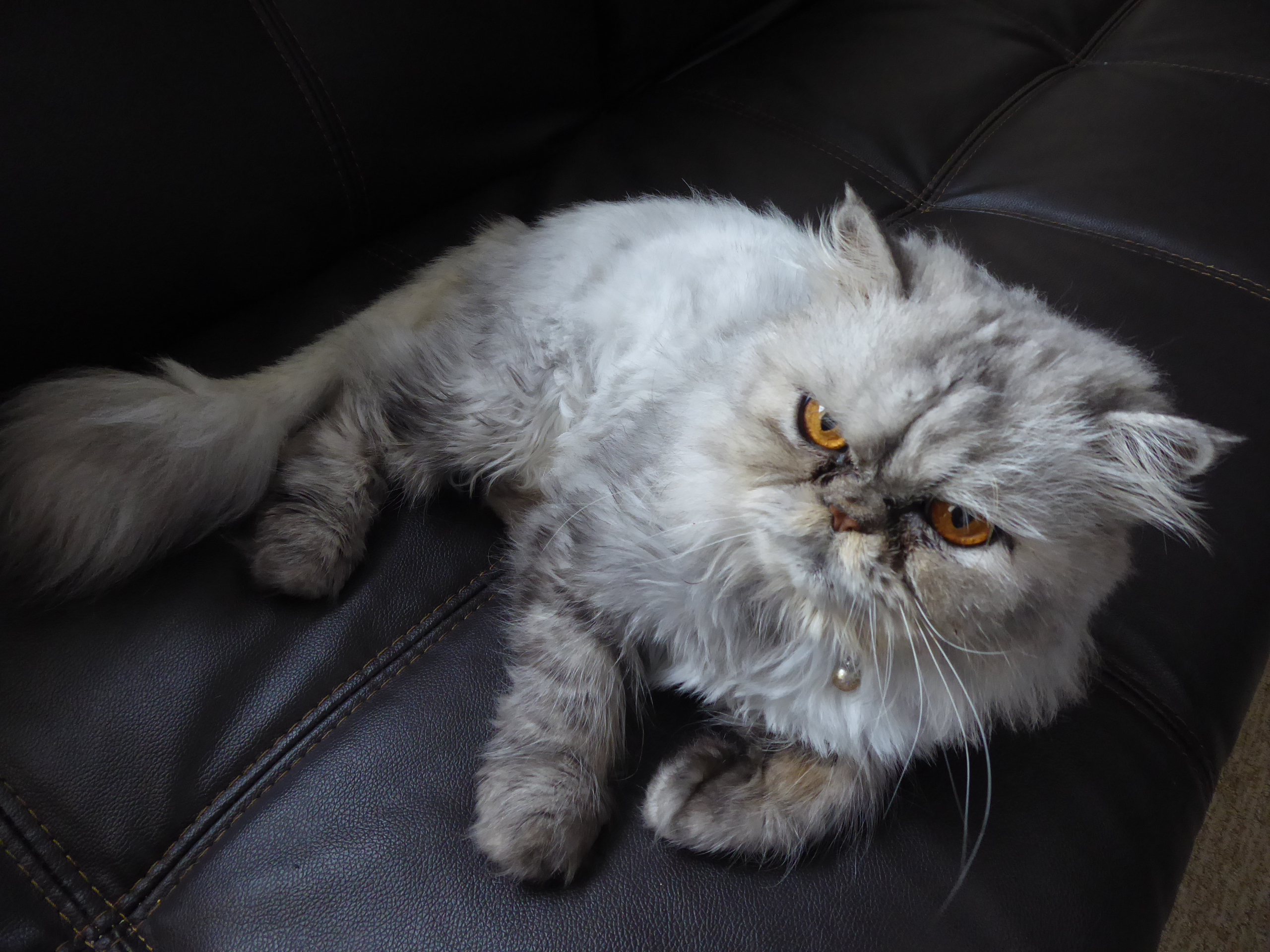 This wasn’t a professional groomer’s cut, like the last one, but it did the job. Pi seems much happier. 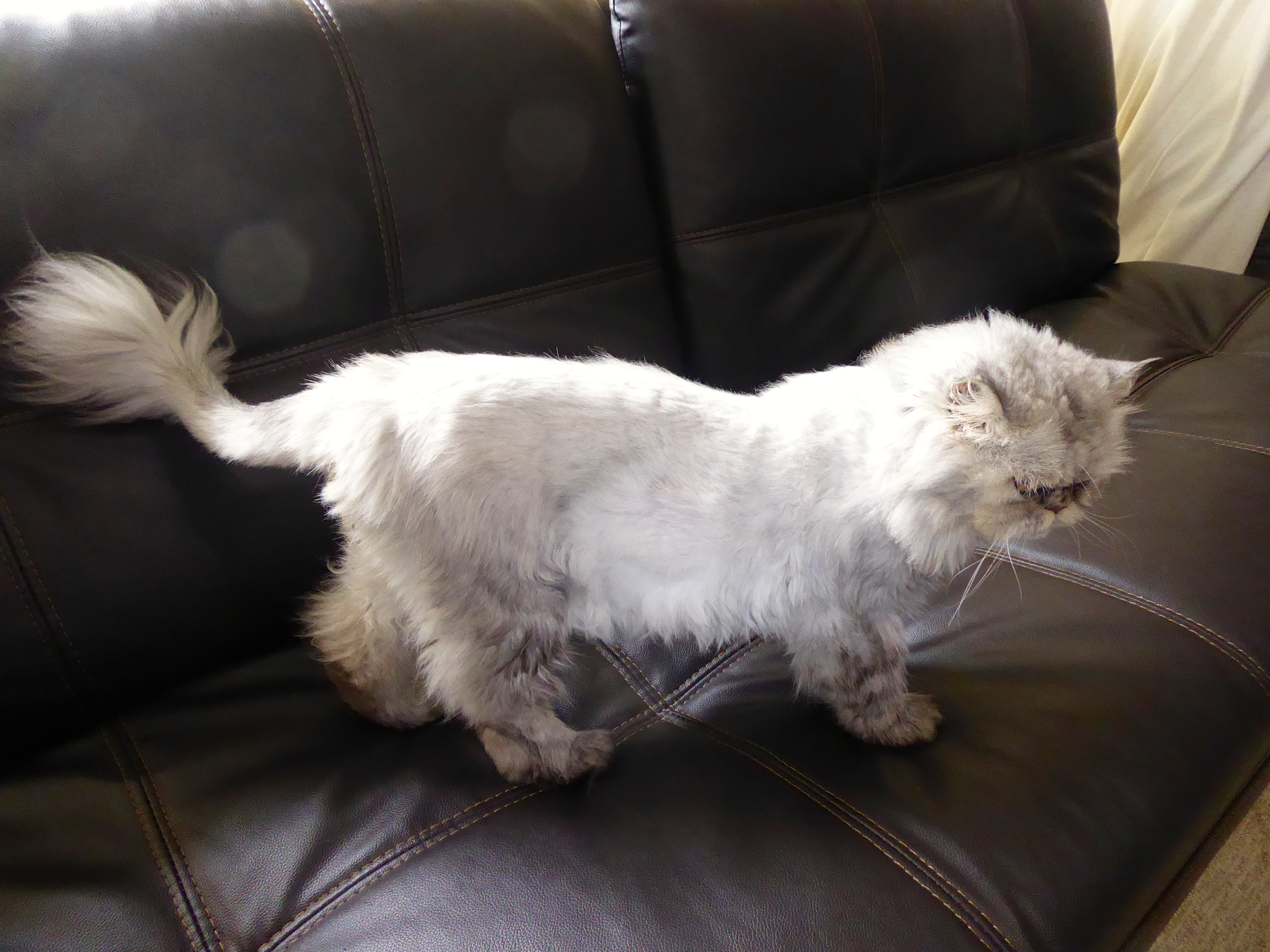 His clipped fur was added to the growing pile of Pi fur, which will be used to make a replica of Pi for this year’s Christmas tree. A hand shows the scale: 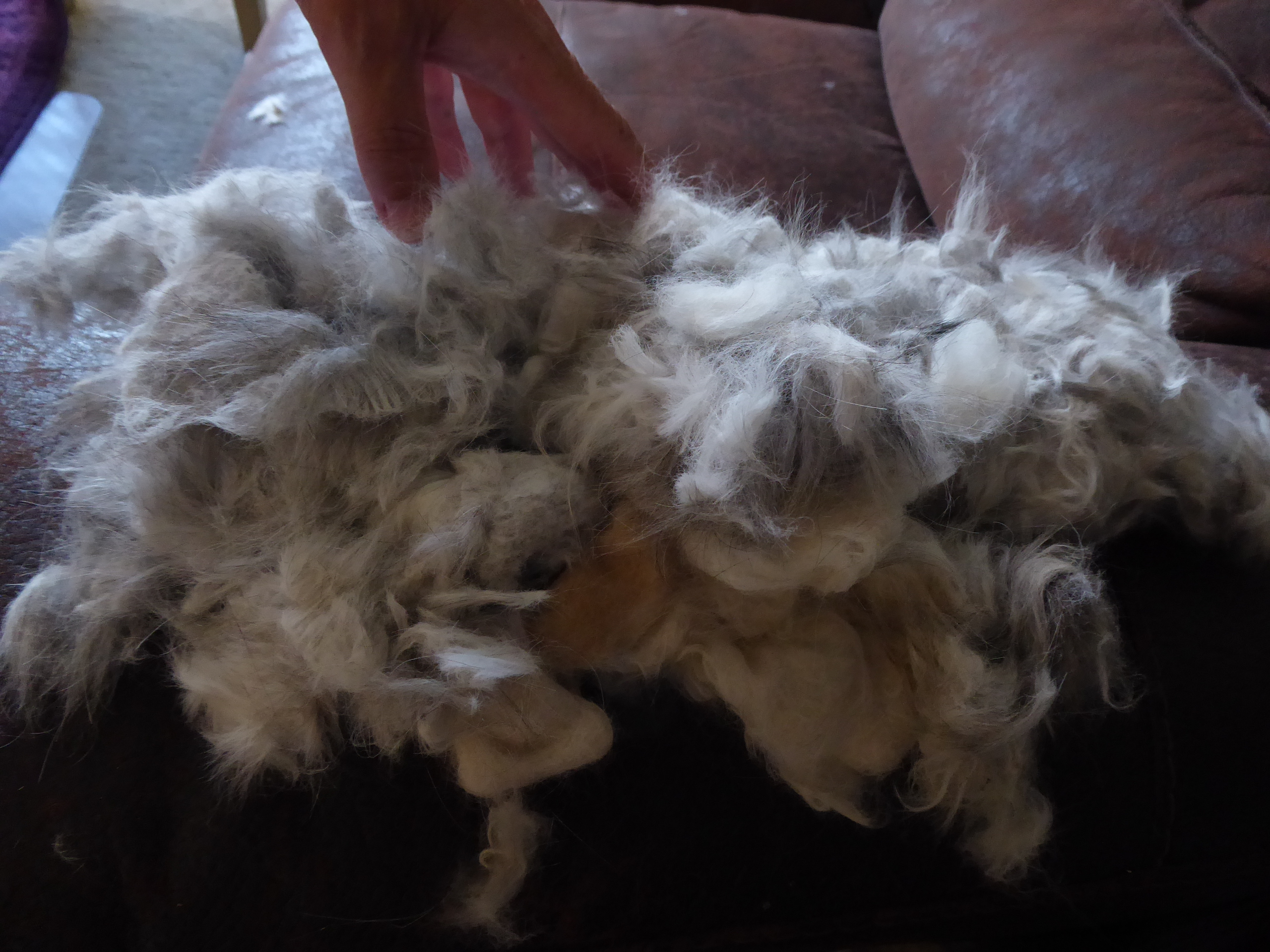 Finally, here’s a mallard hen I adopted. She lives in a nearby marina, and her name is Squeaky because she quacks almost constantly. And, like Katie the Pomeranian duck in the same marina, she has a dented head. I suspect these dents (or de-feathering) come from male ducks trying to rape the females, as drakes tend to bite the heads of females while trying to copulate with them.

But Katie is a lovely hen. Note the dented head: 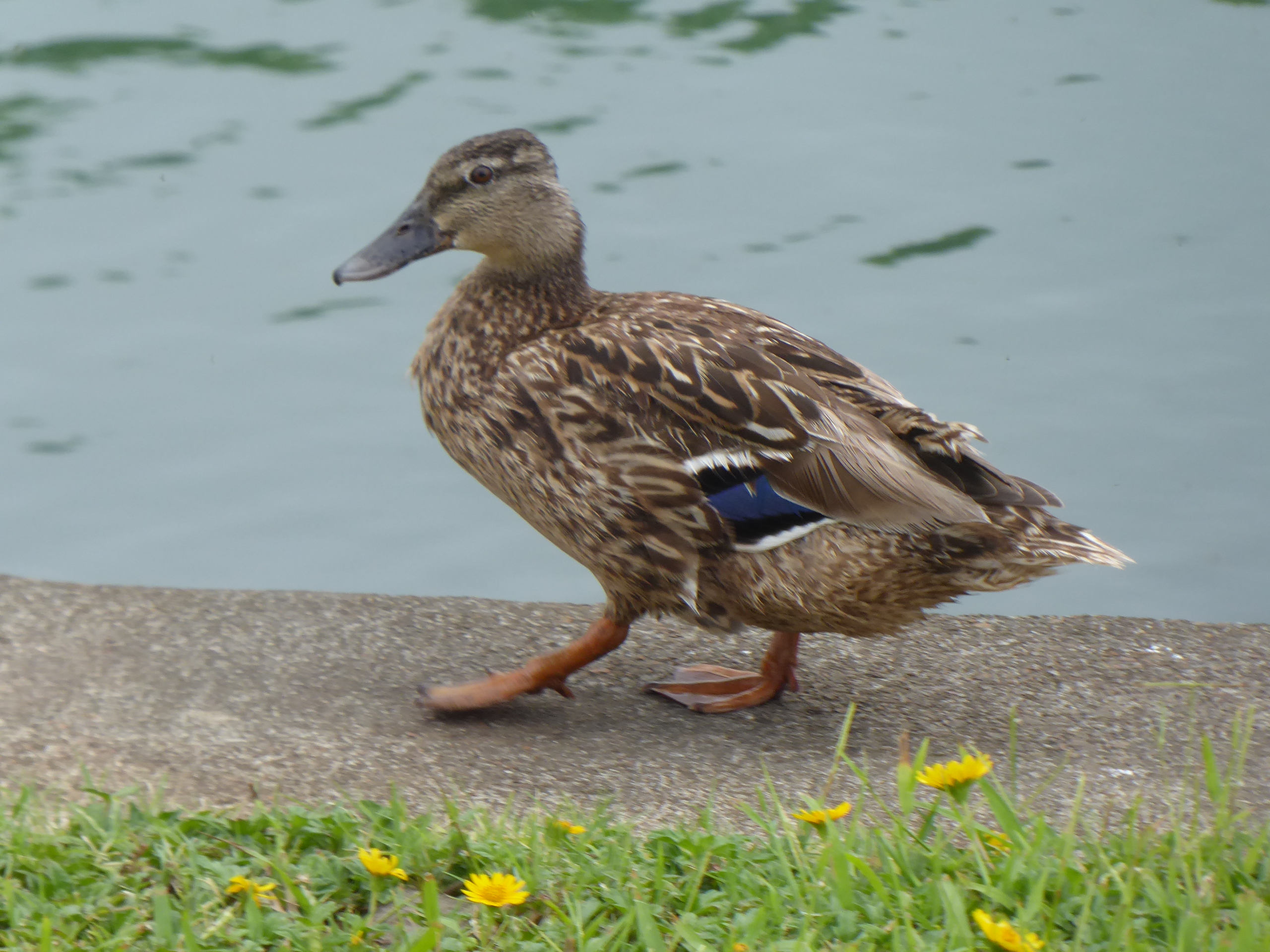 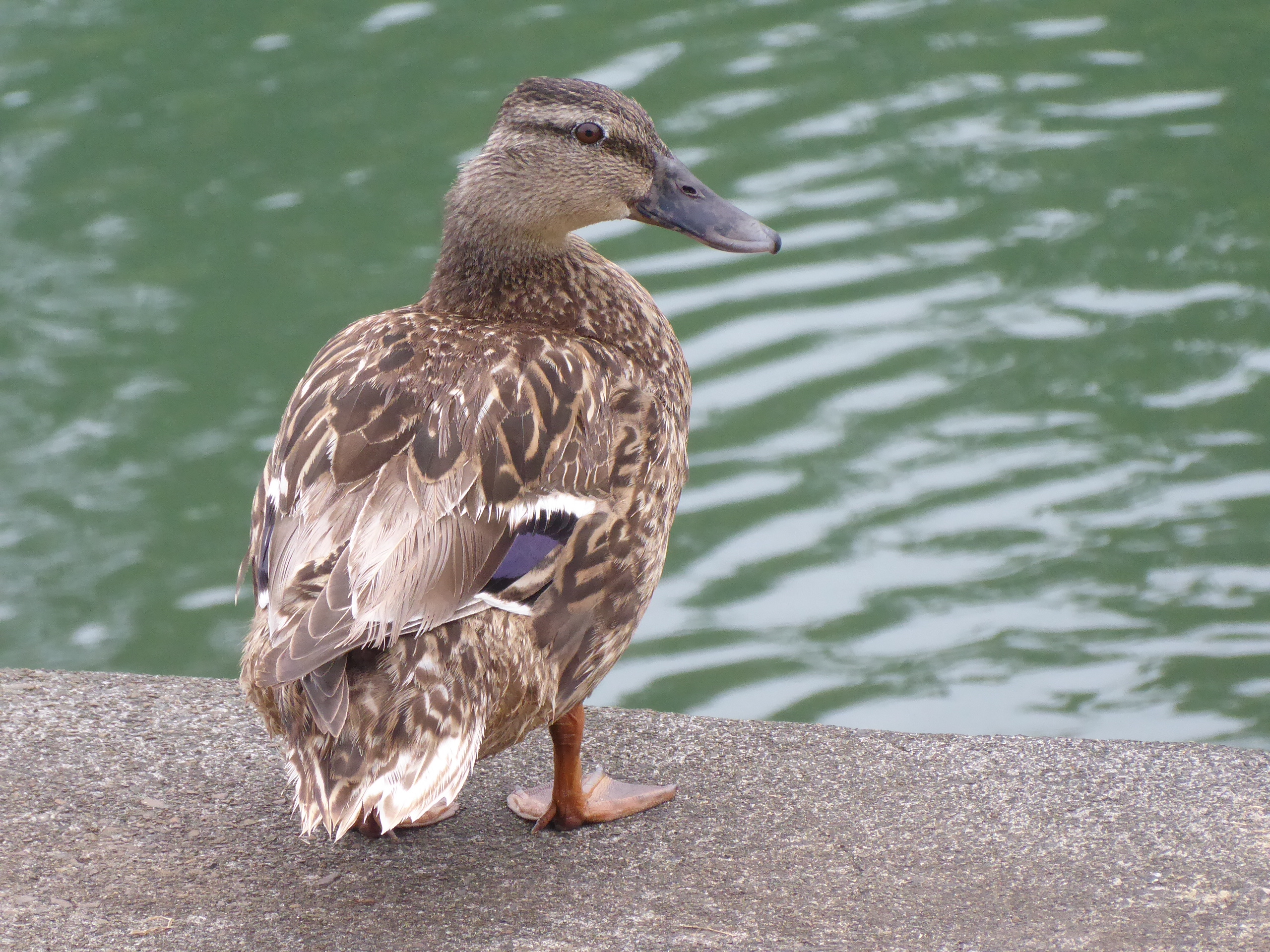 She’s a sweetie, but very vociferous!