As you know from reading this site regularly (you do, don’t you?), Harvard law professor Ronald Sullivan and his wife Stephanie Robinson were fired as deans of Winthrop House (an undergraduate residence) after Sullivan took on Harvey Weinstein as a client. Sullivan was the first African-American house dean in Harvard’s history. (My six posts on the issue can be found here.)

Undergraduates rebelled at the idea that Sullivan would defend an accused sexual predator, and so Harvard, under the direction of Invertebrate Dean Rakesh Khurana, launched a “climate study” of Winthrop House.

While some other problems surfaced in the report, they hadn’t been an issue before, and it was clear to all rational folks that the big problem was Sullivan’s choice of a client. One is apparently not allowed to defend a client who, while being accused of sexual predation, is nevertheless presumed innocent before a trial. That principle seemed to vanish before the nature of accusations against Weinstein.

Sullivan’s and Robinson’s contracts were not renewed, and about 50 law school professors objected to Harvard’s action.

In yesterday’s New York Times (click on screenshot below), Sullivan writes in his own defense. Though he doesn’t say much that I haven’t reported already, his anger, and his disappointment with Harvard, are palpable.

In the text below, Sullivan’s words are indented.

As I’ve mentioned, Sullivan had plenty of bona fides, including defending clients of which the Woke would approve:

The administration’s decision followed reports by some students that they felt “unsafe” in an institution led by a lawyer who would take on Mr. Weinstein as a client.

I am willing to believe that some students felt unsafe. But feelings alone should not drive university policy. Administrators must help students distinguish between feelings that have a rational basis and those that do not. In my case, Harvard missed an opportunity to help students do that.

The administration knew full well that for 10 years I had been able to fulfill my duties as a faculty dean — including advising and representing student survivors of sexual assault in the context of Title IX — while representing clients in criminal court. Until this spring, there was never even a whisper of a complaint that I was unable to provide the care and concern that all students concerned with sexual violence deserve.

I find it very hard to believe that students would truly feel “unsafe” with Sullivan as house head. Any woman, for instance, who needed to confide in someone after a rape or episode of sexual harassment, and bridled at seeing Sullivan, could always go to one of Harvard’s numerous counselors or psychologists. Why would she then feel “unsafe” with Sullivan as head of her house? This may be an instance, as someone theorized about Oberlin students’ overreacton in the Gibson case, of social justice warriors, cosseted in a comfortable environment, needing something to rebel against. At least that’s plausible, as surely a Harvard student is rational enough to appreciate that a lawyer doesn’t necessarily endorse the crimes of which his client is accused!

The biggest black mark on Harvard’s record about this episode is the University’s failure to use it as a teaching moment—as a way to impart the lesson given in the final sentence of the previous paragraph. Instead, Harvard, like Oberlin with the Gibson Bakery, simply capitulated to the mob. I blame Dean Khurana and Harvard’s President for taking the easy but shameful route of firing Sullivan and Robinson. Sullivan has no appeal here—except to the readers of the New York Times. Sullivan adds:

I would hope that any student who felt unsafe as a result of my representation of Mr. Weinstein might, after a reasoned discussion of the relevant facts, question whether his or her feelings were warranted. But Harvard was not interested in having that discussion. Nor was Harvard interested in facilitating conversations about the appropriate role of its faculty in addressing sexual violence and the tension between protecting the rights of the criminally accused and treating survivors of sexual violence with respect.

Instead, the administration capitulated to protesters. Given that universities are supposed to be places of considered and civil discourse, where people are forced to wrestle with difficult, controversial and unfamiliar ideas, this is disappointing.

. . . I am profoundly troubled by the reaction of university administrators who are in charge of student growth and development. The job of a teacher is to help students think through what constitutes a reasonable argument. It is a dereliction of duty for administrators to allow themselves to be bullied into unprincipled positions.

This must change. Until then, universities are doing a profound disservice to those who place their trust in us to educate them.

This brings to mind not only the ignoring of the facts in the Oberlin case, but also the “three great untruths” listed by Greg Lukianoff and Jon Haidt in their recent book The Coddling of the American Mind: How Good Intentions and Bad Ideas Are Stetting Up a Generation for Failure.

These untruths, promulgated by teachers, parents, and students themselves, are, according to Lukianoff and Haidt, responsible for driving much of the bizarre behavior we’ve recently seen on campus; I discussed them here. To wit:

1.)  We young people are fragile (“What doesn’t kill you makes you weaker.”)

2.) We are prone to emotional reasoning and confirmation bias (“Always trust your feelings.”)

3.) We are prone to “dichotomous thinking and tribalism” (“Life is a battle between good people and evil people.”)

All three of these are clearly in play in the Sullivan incident. Harvard’s behavior here is reprehensible. It should not be following the students’ outrage, but leading them by teaching them how the law is supposed to work.

Addendum: A friend sent me a photo of this plaque on the wall of the federal courthouse in Boston, and asked, “What part of this don’t they understand?” 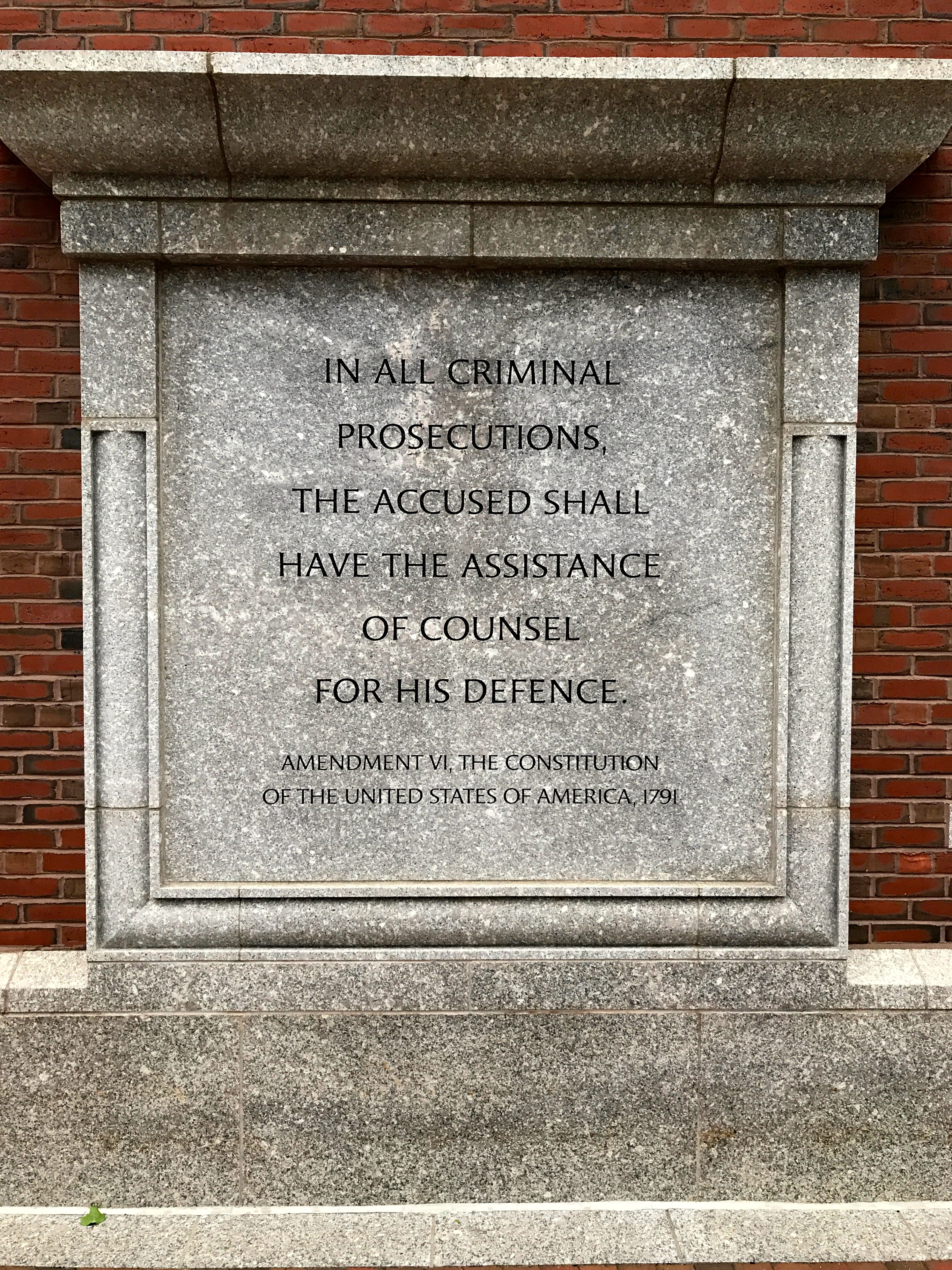 32 thoughts on “After Harvard fired him as a house dean, Ronald Sullivan responds in the NYT”