I’m quite puzzled, but not all that surprised, by this unusual published statement by New York Times publisher A. G. Sulzberger. The publisher was invited to the White House for an “off the record” meeting with President Trump. Because Trump tweeted about it, though, Sulzberger rightly considered it now “on the record”, and issued the statement below (click on screenshot to see the piece, though I’ve put his statement below in its entirety): 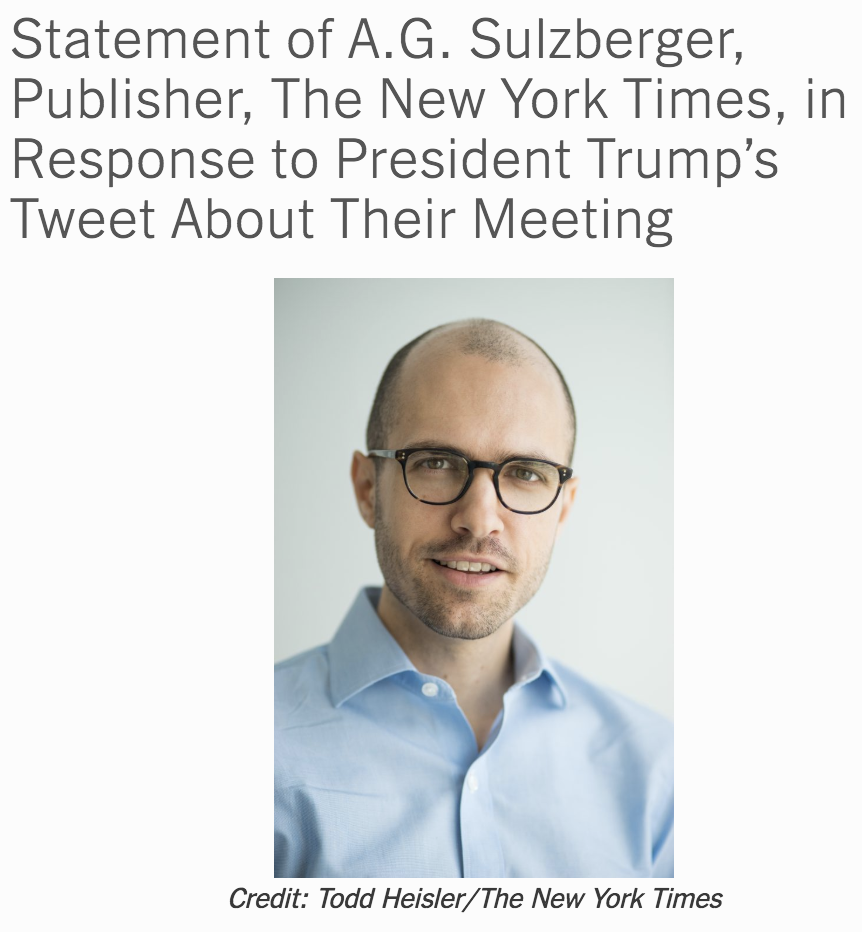 My main purpose for accepting the meeting was to raise concerns about the president’s deeply troubling anti-press rhetoric.

I told the president directly that I thought that his language was not just divisive but increasingly dangerous.

I told him that although the phrase “fake news” is untrue and harmful, I am far more concerned about his labeling journalists “the enemy of the people.” I warned that this inflammatory language is contributing to a rise in threats against journalists and will lead to violence.

I repeatedly stressed that this is particularly true abroad, where the president’s rhetoric is being used by some regimes to justify sweeping crackdowns on journalists. I warned that it was putting lives at risk, that it was undermining the democratic ideals of our nation, and that it was eroding one of our country’s greatest exports: a commitment to free speech and a free press.

Throughout the conversation I emphasized that if President Trump, like previous presidents, was upset with coverage of his administration he was of course free to tell the world. I made clear repeatedly that I was not asking for him to soften his attacks on The Times if he felt our coverage was unfair. Instead, I implored him to reconsider his broader attacks on journalism, which I believe are dangerous and harmful to our country.

Now it’s unseemly for Trump to impugn the press as a whole, but Sulzberger goes further, saying that the President’s words are equivalent to violence, putting journalists at risk and in face undermining the nation’s commitment to free speech and a free press.

It is no such thing. Trump’s unhinged tweets are not the “immediate incitements to violence” that have been deemed illegal by the courts. Nor are they any incitement to violence. They are an opinion: a misguided one, to be sure, but not a violation of the First Amendment. And, in fact, the Times’s response to the statement above is an affirmation of free speech and a free press. After all, the Times can legally say what it wants about Trump so long as they don’t engage in illegal libel and defamation.

This just buttresses my view that the NYT, much to my dismay, is moving more and more toward the Control Left. Now they’re engaging in the CL posture that words are equivalent to violence, and so should be suppressed. What a thing for a newspaper to say! The fact that Trump is both an idiot and the President doesn’t deprive him of his First Amendment rights.