Three years ago I had the chance to chat with J. D. Watson (yes, the DNA Watson ) for well over an hour, and it was an enlightening conversation spanning a lot of diverse topics (see my summary at the link). Watson has a reputation, rightly deserved, for being controversial, and he’s said a number of things that sometimes verge on the odious. The most infamous are his comments on race and intelligence given in an interview with the Sunday Times in 2007, reported by the New York Times in a 2007 piece article in 2007 and summarized in Wikipedia.  In short, he suggested that Africans had genetically-based lower IQs than other groups. That’s not the first provocative, hurtful, and unevidenced thing he’s said.

Watson’s statements, although preceded by a history of similar biologically-deterministic remarks, brought him down: he was universally vilified and forced to resign as Chancellor of the Cold Spring Harbor National Laboratory. A number of speaking invitations he’d received were withdrawn. Accusations of racism have followed him ever since.  His name will always be associated with those Sunday Times remarks. I didn’t report this in my earlier post on this site, but Watson brought up the racism issue himself, and it was clear that he had been deeply upset by it, and felt blindsided and unfairly accused. I should add that he apologized for his remarks shortly after he made them.

But is Watson a racist? I don’t know. He is a biological determinist, and he took the phenotypic data on IQ differences as reflecting hard-wired genetic differences—an unwarranted assumption. We still have no good data on the genetic basis of ethnic differences in IQ. But certainly his remarks were unwise and hurtful. So if saying that performance differences are correlated with ethnicity is racism, then yes, he’s a racist. But I’m not sure that he bears a personal prejudice against blacks and favors discrimination against them (my definition of racism), though one can, I suppose, make inferences about that from his remarks about employees. At any rate, he should have kept his mouth shut, and Cold Spring Harbor had little choice but to fire him.

But now it’s 9 years on, and he’s still vilified, to the extent that a lecture he was going to give at New York University (NYU) has just been canceled because some student groups objected. Here’s a letter sent by the NYU lecture committee informing people about the rescinded invitation:

We are writing to inform you that the lecture by Professor James Watson, scheduled for September 12, 2016 has been cancelled. We received the attached letter that had been written by medical and graduate students at NYU School of Medicine to express their feelings regarding the invitation of Dr. Watson for this distinguished lecture. In the letter, the students raised the point that Dr. Watson had made public claims to diminish respect for black, female and obese individuals. We agree with the students that this runs counter to our mission of diversity and inclusion at NYU Langone Medical Center and have thus elected to cancel the lecture.

We would like to take this opportunity to commend the students, deans, and faculty who have been involved in this discussion for their devotion to our shared community. At NYU, we have a strong commitment to equality as well as freedom of speech, and the right balance between these is not always easy to determine. While we may have differences of opinion, we also have tolerance. The Neuroscience Institute will be partnering with students and administration in holding an open forum on inclusion and diversity in the sciences. Please be alert to future notifications for this event as we invite all voices to be heard.

We enthusiastically join our student community in safeguarding an environment that promotes diversity and that respects all people for their capacity to contribute. We will continue to honor this moving forward in our selection of speakers, professors, and trainees and will seek to include a wide range of perspectives during the selection process.

And here is the letter that got the Organizing Committee to cancel the lecture: 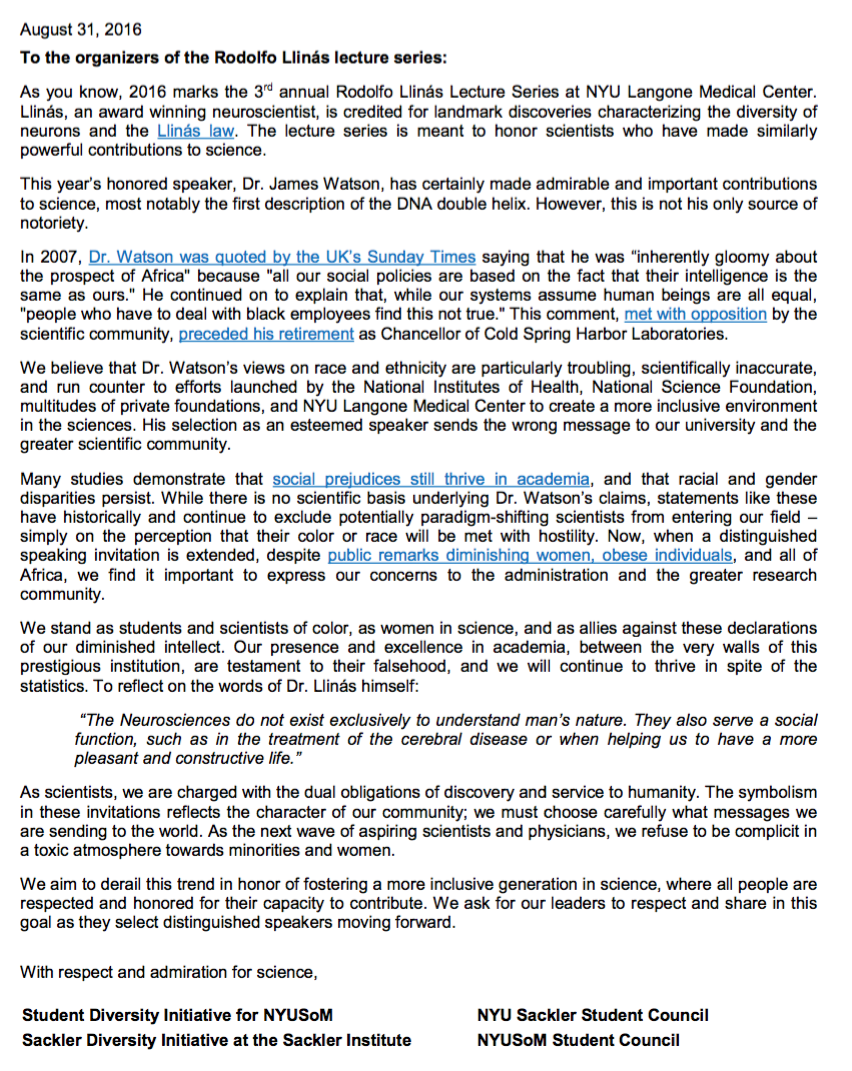 While NYU had every right to decide whether or not to invite Watson, once he was invited I see this kind of cancellation as censorship. For one thing, I doubt that Watson would have said anything about race. Even if he’s bigoted, he’s learned to keep his mouth shut.

Second, I think he’s been punished enough, and deserves at least a chance to be heard. Losing the Chancellorship of Cold Spring Harbor—losing his job—is about the worst thing that can happen to a scientist, and although there was no option about that, does he deserve to be shunned and punished for the rest of his life? (He’s now 88.)

Finally, Watson still has useful things to impart, as I discovered when chatting with him. Now the students have no choice about whether they can hear him.

Should the students protest his talk? Certainly! They can have a counter-talk, peaceful demonstrations, and so on: that is the “free speech” that NYU claims it values. And nobody has to go listen to him if they want. But now there’s no choice, for Watson cannot speak. Note, too, that NYU is already organizing a “counter-forum” on inclusion and diversity in the sciences, while banning Watson. You can be sure that only one ideological view will be promoted at that counter-forum, and I doubt that anyone will defend Watson’s right to speak once he was invited.

This is censorship, pure and simple. If these students had their way, Watson would never be able to speak in public again, for he is tarred for life. And who knows—maybe he’s changed his views in light of the absence of data supporting his views on racial differences. His detractors have, in effect, given Watson a life sentence of being shunned for what he said nine years ago, and for which he’s apologized; and I don’t think that’s fair. Enough is enough. Student protest, certainly; student censorship, no.