As Jerry noted at the time, this past Wednesday was Darwin’s Birthday. My evolutionary biology class met the previous day, Tuesday, and the first slide I showed for the day was the following. 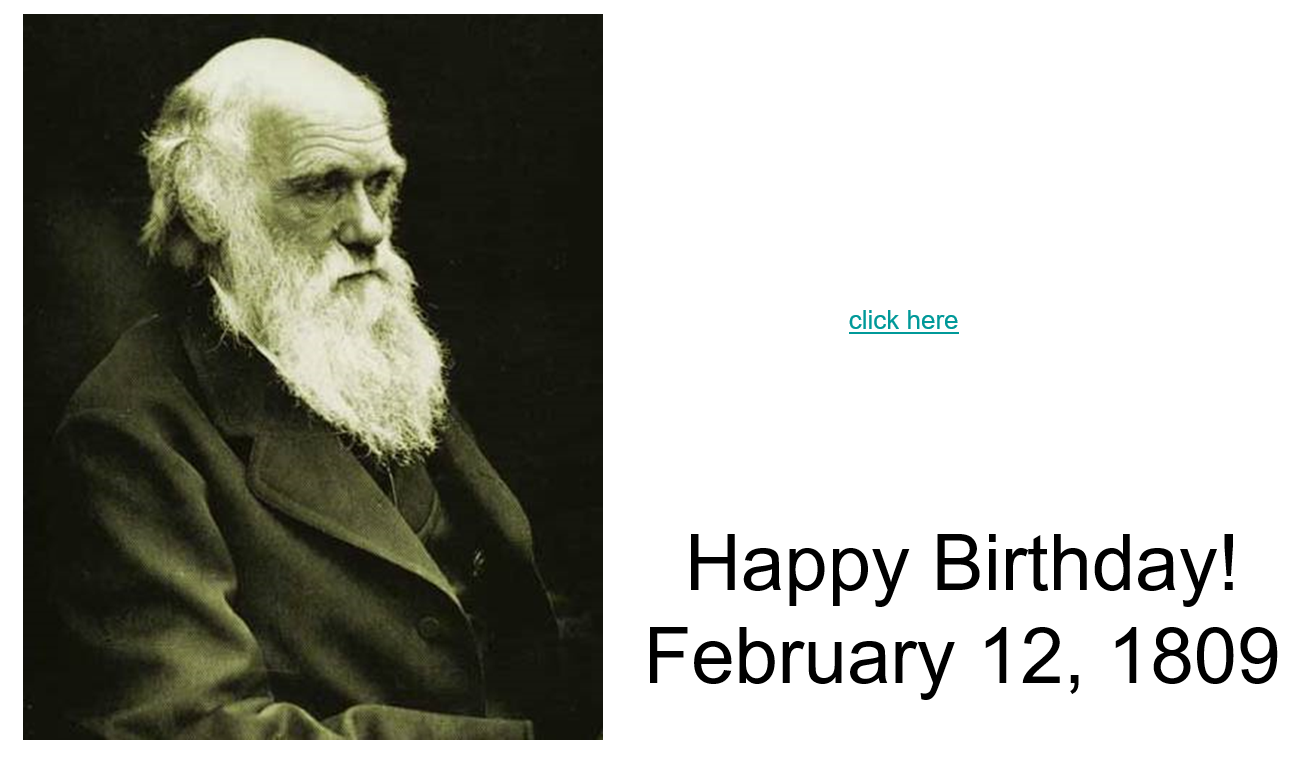 The “click here” in the middle of the slide led to a performance of the Beatles’ song “Birthday”. (For copyright reasons, the video features the Beatles, but the sound is Paul alone in a post-Beatles performance.)

On Darwin Day itself, I watched Creation, a 2009 biopic about Darwin starring Paul Bettany as Charles and Jennifer Connelly as Emma. I did not see it at the time of its release, and it had some difficulty finding a U.S. distributor, ostensibly because Darwin and evolution were too controversial for the American public.

Jerry gathered a few reviews at the time, which were not terribly enthusiastic. I took a look at those reviews, one in the N.Y. Times by A.O. Scott, my favorite film critic, and one by Ryan Jay, another favorite critic. Both were also lukewarm on the film, Jay giving it his middling score of “Rent It”, with Scott being a bit more harsh:

It aims for a liberal-minded balance, at least on the thematic level. But at the same time the film traffics in the pseudo-psychological mumbo-jumbo that is the standard folk religion of the film biography, and undermines its interest in reason by dabbling in emotive pop occultism. Recoiling from the possibility that ideas themselves might impart tension and interest to this tale, Mr. Amiel [the director] and Mr. Collee [the writer] induce a kind of literary brain fever and reduce Darwin’s work to a symptom of his mental and emotional anguish.

I did not look at the reviews before watching the film, so the following comments are not “pre-influenced”. A

ll in all, I was disappointed. The production values are high, and some filming was even done at Down House. The level of production design accuracy was fairly high (e.g., the washroom with curtain in Darwin’s study). Parts of the dialogue I recognized as being taken from Emma’s and, especially, Charles’ letters. Bettany, as made up, does a fair Darwin impersonation, and I was charmed by Benedict Cumberbatch’s unexpected turn as Hooker. (Cumberbatch was largely unknown, at least to American audiences, at the time, and is buried in the credits.) But Connelly is given almost nothing worthwhile to do, wasting her talents; and Huxley (played by Toby Jones) is written as crankily aggressive, rather than as the erudite explicator he seems from his public writings.

And the plot seems quite muddled. The film centers on Darwin’s relationships with Emma and, even more so, on their daughter Annie, who died in 1851. But most of the action takes place several years later, with frequent flashbacks (some to the Beagle voyage), yet Annie is everywhere (except the Beagle). This may be a case of knowing a little being dangerous, as I kept trying to fit the various scenes into a coherent timeline, and only later realized that Annie is a ghost, or better, a symptom of Darwin’s hallucinations, in many, though not all, of the scenes. I don’t know if a naive viewer would be more or less confused than me by this.

Were I someone not versed in the history of evolutionary biology, I would thus give it a mixed review. But knowing some of the actual history, I found some of the themes of the film suffered from being, at best, misplaced in their emphases. The film shows Darwin as losing (most of) his Christian faith as the result of wrenching inner turmoil, leading to open conflict with Emma, with the death of Annie pushing him towards the edge of madness and final loss of faith. Darwin’s well-known ill health is portrayed as essentially psychosomatic, the result of guilt over Annie’s death and his loss of faith. And, his nagging internal torments delayed his work for many years. While there is a grain of truth in each of these elements, the resulting picture is distorted. Darwin did mourn the death of Annie; he did love Emma dearly, and fretted over their differences with regard to faith (see especially this); he knew that consanguineous marriages could lead to “weakness” in children; and he was ill. But he wasn’t nearly mad; his faith more nearly slipped away; he probably didn’t delay terribly long; and the child whose illness was vexing him at the time was not Annie (long dead), but little Charles (who died shortly after Darwin received Wallace’s letter from Ternate).

I searched for, and found two contemporaneous reviews from a more scientific/historical (as opposed to film criticism) perspective. The first was a review by Janet Browne, Darwin’s most authoritative biographer, and professor of the history of science at Harvard. As do the film critics, she takes a lukewarm view

The movie Creation gives . . . a fictionalized perspective. . .  Once one gets over the mismatch between the known historical record and the sentimental version of Victorian family life that is presented here, the film has some rather good sections. . . . [Darwin’s] love for his nine-year-old daughter Anne excessively dominates the plot. There are some delightful scenes, mostly in flashback again, followed by some stupid ones in which Darwin becomes so deranged by her death that he has nightmares (overly tinged with Henry Fuseli) and continuously hallucinates her presence. About ninety minutes into the film, the storyline goes haywire with Darwin vomiting, weeping, and hallucinating. The death of this daughter is presented as the emotional fulcrum of the film, bringing the religious differences of her parents to the fore and serving as a foil for drawing out Darwin’s doubts about publishing. Perhaps.

The other review was by James Williams, senior lecturer in science education at Sussex. His review is scathing. He notes the confusing chronology, details a number of errors and lapses, and laments that the actual events would have made for a better film. Some excerpts.

It promised so much, yet delivered a turkey! . . .

Granted, the film did give some excellent and accurate portrayals of events, but why deliver them out of sequence and why leave out some important details, yet include others? . . .

At least Alfred Russel Wallace (my personal hero) did get a mention – but only just. It was the receipt of Wallace’s letter by Darwin that prompted Charles Lyell and Joseph Hooker to urge Darwin to write Origin, not a visit by Huxley.

Darwin was distraught by the letter he received from Wallace (accurate in the film), but what put pressure on him was not Annie’s health (she was already dead at this point remember) but the health of his newborn son Charles – who did actually die during the period of his receipt of Wallace’s letter – and the fact that children in the village were sick and dying. Just how Emma could be pregnant with Charles junior, at the same time as worrying about Annie’s health, defies biological understanding.

The film makers were determined to make Annie the focus of Darwin’s angst during the writing of ‘Origin’ and deemed this to be the dramatic ‘device’. When you look at the REAL story of how Darwin was almost forestalled and what was happening in his life during June/July of 1858 and through to the publication of ‘Origin’ in 1859 – there was drama enough without having to destroy historical accuracy.

The film is based (loosely, as Williams insists) on Annie’s Box, by Darwin’s great-great grandson, Randal Keynes. I recalled a paper by John van Wyhe debunking the hypothesis that Annie’s death ended Darwin’s faith.  (We have had a number of occasions here at WEIT to comment favorably on van Wyhe’s work, including his editing of Darwin Online, and Jerry was able to meet him on a visit to Singapore, while I did the same when I invited him to speak as part of our Darwin bicentennial celebrations.) The paper was from 2012; Van Wyhe and his coauthor, Mark Pallen, wrote

That Annie’s death caused great distress to her parents and family is beyond dispute. A week after her death Darwin penned a tender memoir of Annie, which was first published (in part) by his son, Francis, in The life and letters of Charles Darwin (1887) . . .  Darwin closed the memoir with a cry from the heart: ‘We have lost the joy of the Household, and the solace of our old age:—she must have known how we loved her; oh that she could now know how deeply, how tenderly wedo still and shall ever love her dear joyous face. Blessings on her.’ However, it must be stressed that nowhere in the millions of written words by Darwin that survive did he ever indicate, directly or indirectly, that Annie’s death had anything to do with his loss of faith. Of course it would be naïve to restrict the evidence only to explicit statements. But first we must acknowledge that there are none. Furthermore, as we shall see, the balance of all surviving evidence that bears on his loss of faith suggests there was no connection with Annie at all. . . .

The suggestion of a sudden death knell for Darwin’s religious belief built on strong emotion stands in stark contrast to his consistent accounts of his loss of faith, which followed from an assessment of the evidence for Christianity and which took place at a‘rate:::so slow that I felt no distress’ (Barlow, 1958, p. 87). Yet Annie’s death was the most distressing event in Darwin’s life. No explanation for this dramatic contradiction has ever been provided. The time has come to bury the Annie hypothesis.

So, in 2009, it was perhaps defensible, or at least popular, to suppose the truth of the so-called “Annie hypothesis”, but van Wyhe and Pallen seem to have laid it to rest.

Another element of the film, though not quite as prominent, is Darwin’s “delay”. Van Wyhe has also addressed this in his paper “Mind the Gap”

In this essay it is argued that not only is there no evidence that Darwin avoided publishing his theory for many years, but the evidence is overwhelmingly against that interpretation. By re-examining the historical evidence, without presuming that Darwin avoided publication, it can be shown that there is no reason to introduce such a hypothesis in the first place. If we come to the evidence already believing that Darwin put it off, then vague and ambiguous passages will seem consistent with such a view. . . .

A fresh analysis of Darwin’s manuscripts, letters, publications and the writings of those who knew him intimately shows the story to be quite different from one of a lifetime of avoiding publication. It will be demonstrated that Darwin’s delay is a historiographical theme of quite recent date and unknown not only to Darwin and his contemporaries but also to generations of writers after them. Furthermore, this theme is not the product of the greater knowledge of Darwin produced by modern historical scholarship since the 1960s. Modern writers inherited Darwin’s delay from earlier writers who did not have access to the full manuscript corpus.

In fact, Darwin hardly veered from his original plans for working out and publishing his species theory in due course.

If you are a Darwin completist, you’ll want to see the film, but otherwise you can skip it. Its emphases seems wrong, perhaps to the point of no return; but I did enjoy some parts, and the segment conjoining Annie’s death, and the death of a young orangutan at the London Zoo, moved me near to tears. As Janet Browne concluded, “In my view the juvenile orangutan was outstanding.”