Perseverance is just a few minutes from entering Mars’s atmosphere. Get on your damn computer or phone and watch it here:

All is going well.

BLOODY HELL! THEY DID IT! How fantastic!

Today the Mars Rover “Perseverance” will land on the Red Planet at 3:55 p.m. Eastern U.S. time (2:55 Chicago time, 8:55 pm London time). You’ll want to be online then, for the landing will be filmed live with several cameras and a microphone. NASA has a countdown page here, which links to all kinds of information about the Rover and the mission.

The live NASA videocast, however, begins over an hour earlier, at 2:15 p.m. EST, 1:15 Chicago time, and 7:15 p.m. London time. You can watch it live below. Be sure to set your alarm for at least 3:30 p.m. Eastern time so you can be there during the Seven Minutes of Terror. Watch at the site below:

Remember, if the landing is successful, we won’t see the live video until at least eleven minutes after touchdown, for that’s how long the signal takes to get from Mars to Earth.

Fingers crossed! If all goes well, we can puff out our chests and share a bit of pride in humanity—and science. (And don’t forget that science also gave us the Covid vaccines.)

Tomorrow the Mars Rover “Perseverance” will land on the Red Planet at 3:55 p.m. Eastern U.S. time (2:55 Chicago time, 8:55 pm London time). You’ll want to be awake then, for the landing will be filmed live with several cameras! NASA has a countdown page here, which links to all kinds of information about the Rover and the mission. Tomorrow afternoon I’ll post some links where you can watch the landing, assuming that all goes well.

The landing sequence of this gizmo in Jezero Crater is known as “The Seven Minutes of Terror” because the slowing down of the spacecraft from 12,100 miles per hour to just 1.7 mpg right before landing takes seven minutes and a ton of complicated technology. All of that was recently programmed into the spacecraft and rover: since there’s an 11-minute delay between Earth and Mars communication, we won’t know whether the Rover has landed until it’s all over.  And there’s nothing anybody can do to help at Mission Control.

Here’s a NASA animation showing how damn complicated this landing will be! It involves separation of the module containing the rover, deployment of a parachute, jettisoning of a heat shield, jets helping navigate over the surface to find a good landing spot, and most amazing, a “sky crane” that gently lowers the rover to the planet’s surface and then flies away.

It’s stunning that a mammalian species can pull off something like this. Don’t miss the live feed tomorrow!

This is a SCIENCE mission, and the rover will be landing in a crater that harbors an ancient delta. As Space.com reports,

Perseverance, or “Percy” for short, will explore the Martian terrain and conduct a number of science investigations. Among its objectives, Percy will collect samples, deploy the first helicopter beyond Earth, and search for signs of ancient life on the fourth planet from the sun.

And from the USA Today link above courtesy of NASA, a timeline of the landing:

I guess there will be sound, too, as there is an array of cameras and a microphone: 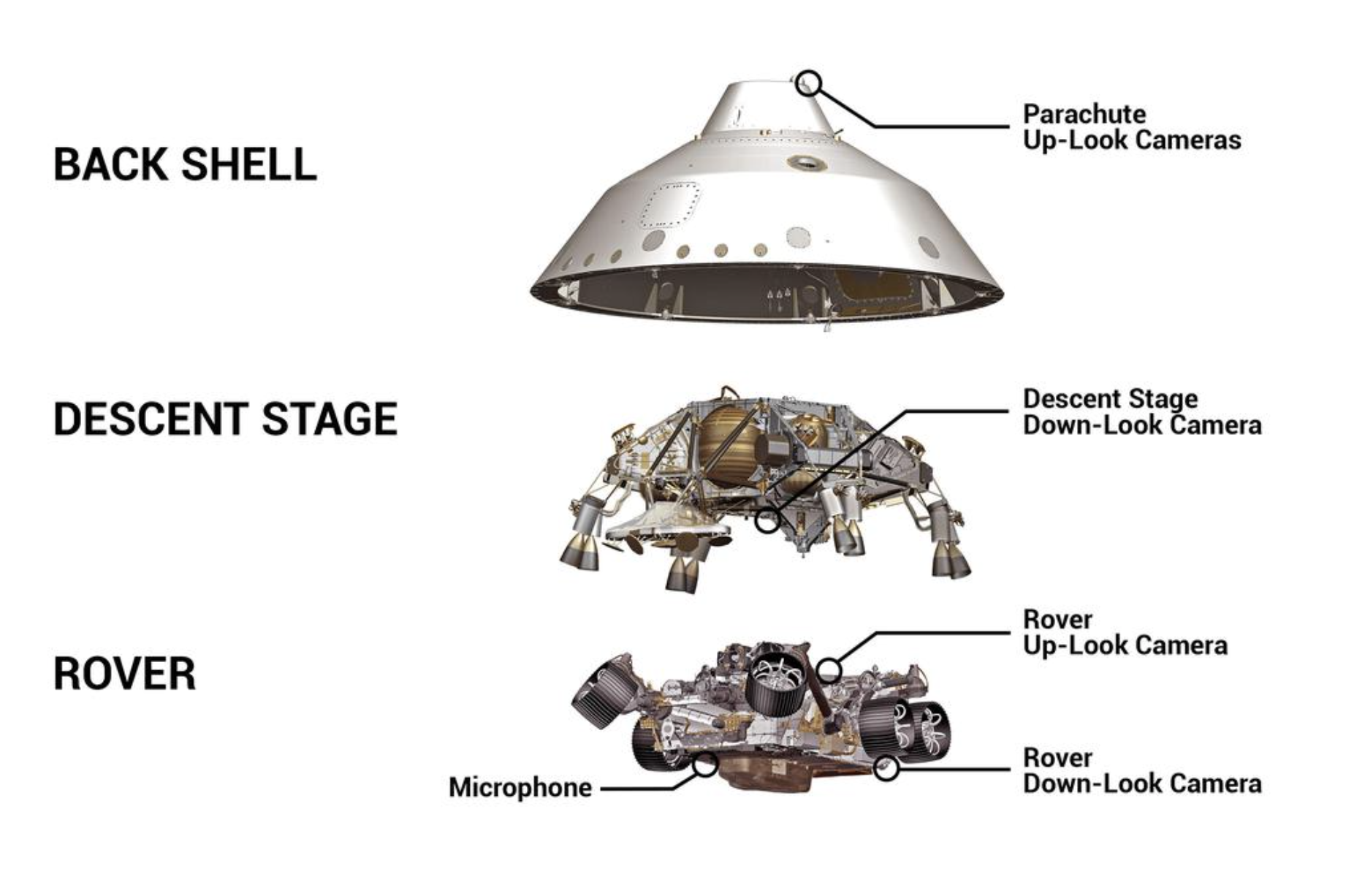 Big Mouth Billy Bass is an adult toy consisting of a plastic bass that sings music and moves its head and fins (see here for an early example).

This videomaker apparently connected Billy Bass up to an Alexa and managed to synchronize its mouth and head with the words. Ergo, you can ask Billy anything.

You used to be able to buy Alexa-compatible Billy Basses on Amazon, but they appear to be out of stock.

Here’s the YouTube video of Spot the Robotic D*g, of course a product of Boston Dynamics. It’s programmed to do this stuff, meaning it doesn’t find trash by itself and deposit it in the basket (at least, as far as I know). That’s coming, though. And of course it would be good for police work, disposing of bombs, and so on. Spot can certainly bring you your slippers, too!

Now that Spot has an arm in addition to legs and cameras, it can do mobile manipulation. It finds and picks up objects (trash), tidies up the living room, opens doors, operates switches and valves, tends the garden, and generally has fun. Motion of the hand, arm and body are automatically coordinated to simplify manipulation tasks and expand the arm’s workspace, making its reach essentially unbounded. The behavior shown here was programmed using a new API for mobile manipulation that supports autonomy and user applications, as well as a tablet that lets users do remote operations. For more information, watch our launch event at 11am EST tomorrow.

And that launch will be at this site.

A while back, someone gave me a Chinese backscratcher: a piece of bamboo with a hand carved at the end with slightly separated fingers.  I use it every couple of days when my back works up a good itch, and believe me, it provides substantial relief!  Here’s what mine looks like: 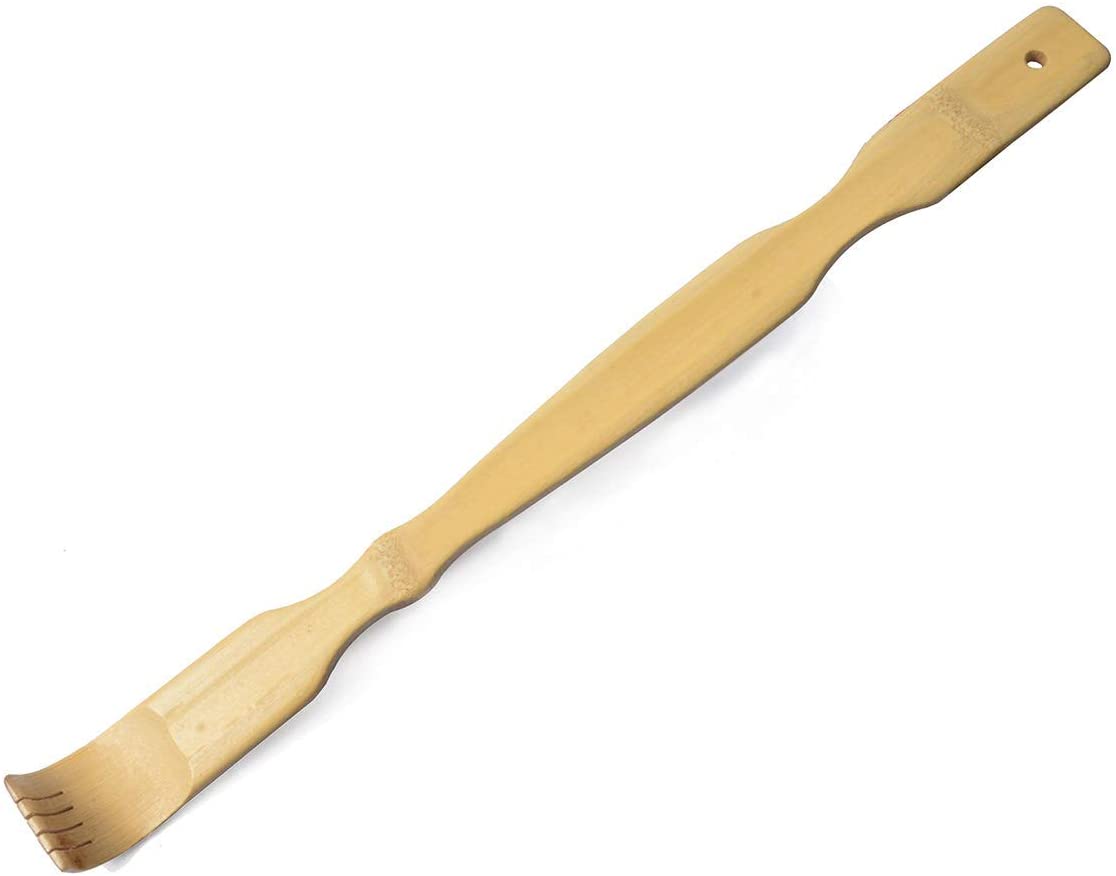 But when I use it I’ve pondered two questions.

A.) Is the relief you get when scratching your back pleasure, or simply the removal of discomfort? (Or are they equivalent?) This same question applies when you finally make it to the restroom after having to hold your bowels or bladder for a long time. I wonder if philosophers have debated this question.

B.) Why do backs itch so much? I have two theories here, which are mine. The first is that they itch no more than do fronts (i.e., your chest), but we’re unconsciously scratching our fronts all the time, while we can’t reach our backs without a special implement. But I don’t notice myself scratching my chest.

The other is that dirt and oils accumulate on your back more than they do on your front, simply because you can’t reach your back so easily in the bath or shower. I don’t have a sponge on a stick or anything like that, and so am forced to wash my back by reaching around with a piece of soap. I’m never sure that does a great job because it’s hard to reach all the places.  If any accumulated back schmutz makes you itch, this could be an explanation.

Maybe there are other theories as well, but these are the only two I’ve thought of.

Reader Bryan called my attention to the latest robot production of Boston Dynamics. Their robots just keep getting more and more amazing. These four, dancing to a classic rock song, are almost unbelievable. Now what we see here is completely programmed—the robots are not of course making “decisions” from a network programmed into them. But that’s coming!

This is a lovely video showing a new way of visualizing cells as they are living and operating. The “microscope” that does this is extremely large and complex. I don’t know much about it, and don’t fully understand the principles, but this video probably tells you all you need to know. The images are stunning, and I love the enthusiasm of the researchers.

There’s an article on this 130-year-old device at bOINGbOING, though the text adds almost nothing to the YouTube notes about this mechanical bird-song-maker:

This wind-up mechanism has a tiny bellows and several gears that produce a remarkably lifelike bird call.

Szymon Pawelec, the collector and demonstrator who consulted on the Scorsese film Hugo, says:

A mechanical singing bird mechanism. Made around 120 years ago in Paris, probably by Bontems. In the film I hope you can identify all the major parts and see them working together to make the sound. The mechanism was in a rusted and seized state and has been restored. Surpisingly [sic] the bellows are in good original condition. See our channel for more, much more.

Here’s another one. I’m still not sure how the damn things work, producing a rather complex bird call, but I have no mechanical talent for discerning these things. It’s enough to marvel at it.

Don’t deny that you’ve wondered “How do astronauts go to the bathroom?”  Well, this official NASA video gives you the answer, at least for the International Space Station, and it all looks like a pretty dire job. That toilet is scary.

The narration and demonstration (no real excretions were filmed) is done by Expedition 63 Commander Chris Cassidy, who does his descriptions straight-up, without a touch of humor.  There are also videos online videos about how to keep your body clean in space (see this one about hair washing), but Lord, these astronauts must be pretty rank after a six-month stint!