This video, arriving from Ziya Tong’s Tw*tter feed via Matthew Cobb, is touching, for it shows how a baby rhino is simply too ponderous to gambol. Or is it even trying to? And if it is, is it imitating or playing with the lamb?

[JAC: It’s almost a holiday—Thanksgiving in the US—so it’s time to ditch the gravitas and have some fun. Here’s the first of two pre-holiday animal videos.]

I declare seals, like otters, to be Aquatic Honorary Cats™. In October 2013, Vimeo user ‘SuperJohnnyAdventurepants‘ went diving on the Farne Islands (off Northumberland, on the north-east coast of the UK), and encountered some lovely seal pups, as you can see here. Turn it on to fullscreen! You might want to turn the sound off if the music isn’t your thing. (Warning – I found the music grew on me with repeated viewings, so be careful.)

Here’s the blurb on Vimeo:

Come and join me and the gang as we get the seal of approval as we visit the Farne Islands in Northumberland in October 2013. We’ve been visiting here for the last six years to say hello to the seal pups and we’ve never had this much interaction before – they were everywhere and all over us!!!! After a nightmare drive there with the worst traffic coupled with the imminent arrival of the St. Jude’s storm we didn’t think this trip was going to be worth the effort but once again the seals made every second worthwhile…….

Filmed on location in the Farne Islands, UK with the help of Sovereign Divers. Contact them here: sovereigndiving.co.uk

It’s the end of a long week, I have finished the copyedits of the Albatross, and I’ve prepared an evolution talk for Truman State in Missouri (where I head Monday), and so it’s time to kick back with a drink and a FELID.  Here’s this Friday’s offering:

Don’t ask me the circumstances here: a predator playing with its prey, and the prey being fearless. The video’s notes may have the explanation:

Parents had a pet baby squirrel who ran away once he was full grown. He comes back to visit every once in a while though. This time he got reaquainted with his old friend! 🙂

One person I showed this to suggested that the squirrel might have had salacious intent, but I refuse to believe that!

According to the caption of this YouTube video, the keeper is trying to give two baby pandas their medication. I think they’d rather play.  This appears to be from the Panda Research Center near Chengdu, China:

And here’s a photo of Gus the Earless Cat, just because it’s been a long day. He’s a good boy, and is here pondering the incoherence of incompatibilism. 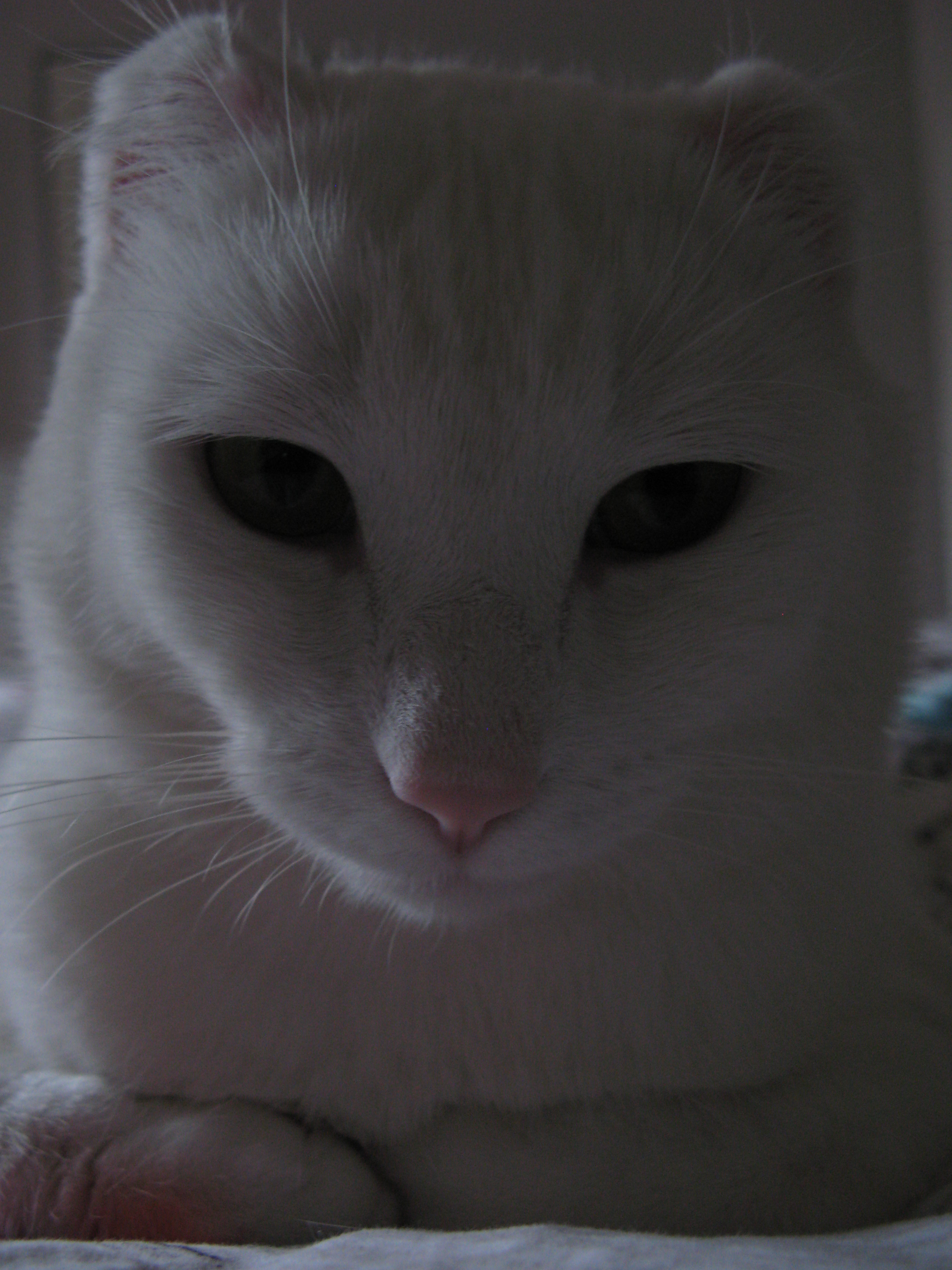 Okay friends, it’s been a hard day slogging over my bibliography, and I’m tired and need some cute animals. Fortunately, we have two today.

Reader Lauren sent me this video with a comment:

I always thought a wombat was a vicious creature with which one should engage in mortal combat.  This video proves they just want to be skritched.
It makes you feel sorry for the wild animals that never get a nice belly rub or full body stroking.

Do all mammals like tummy rubs? Name one that doesn’t!

Reader Grania sent this one, which is labeled “Meet Flocke the baby polar bear, who is being taught to crawl by the zookeepers at Nuremberg Zoo. Apparently she was rejected by her mother so they separated them for fear that mother would harm the baby.”

When I first saw this video, I thought it had been edited as a loop, but now I’m pretty sure it’s a single cut. It’s clearly the Ultimate Kitten Squee, and thanks to the many readers who sent a link.

I guess it means they’re pedigreed, though I don’t know what breed. But who cares? They’re SEVEN KITTENS!

I’m one day from finishing my book, so excuse me while I show you some animal parents from Bored Panda. There’s something here for everyone (except botanists)—even for herp lovers.

My favorites are the lion cub trotting with the older ladies and, of course, the mother and baby squirrel.

Identify the hard species if you can. I’ve been a good boy, and I deserve to experience this at least once before I die. (A tiger would be better, but a bobcat will do.)

What a lucky lad!

The bobcat is described as a rescue animal, explaining why it doesn’t nom the kid.

One thing is for sure: a three-cat day is better than a three-dog night.  Here, to end the weekend on a high note, is a lovely kitty asking its owner for a hug (and don’t you dare tell me that I’ve misinterpreted its behavior!).

No matter how insane an idea is, you can find it somewhere on the internet, often on YouTube. Here’s one: somebody wondered what would happen if they made a VERY SMALL burrito and fed it to a hamster.

This video is the result. It was put up two days ago, and already has 1.3 million views. Such is the power of the hamster, and the appetite of the public for bizarre stuff, which will only increase as posters push the limits.

Srsly, though, this is pretty damn cute. I just wonder what kind of a mind could think of something like this.

For lagniappe, a squirrel reading the newspaper! Srs bsns!! (From BookRiot):