Yes, I’m a sucker for cute animals, and everyone—save my friend Melissa Chen, who hates pandas and thinks they should be allowed to go extinct—thinks the panda is among the Top Five Cutest Animals.  On April 6, Warner Brothers will release the IMAX movie “Pandas”, which follows the life of  Qian Qian, a panda born in captivity but released in the wild to swell the shrinking population.

It’s narrated by Kristen Bell, and here’s the trailer:

I didn’t steer you wrong about Kedi, did I? (And if you haven’t seen it, you’re a reprobate.)

Oh, and here’s the Latin name of the giant panda: Ailuropoda melanoleuca, which means “black and white cat-foot”. There will be a quiz.

Although the Cincinnati Zoo has had some bad press on this site, most notably when it hired a chiropractor to adjust the spine of a baby tiger who was “failing to thrive,” it also turns out some nice animal videos.  So enjoy this baby black rhino (Diceros bicornis) having its very first mudbath.

This is a great video showing a renegade baby raccoon refusing to enter its tree hole den. Mom is frustrated and makes repeated attempts to stuff the little bugger in, going so far as to grab it on the head with her teeth (this doesn’t look like a felid scruff carry!). She finally wins after a long struggle—after all, that baby carries half of her genes and has to be secured.

There’s no information on this video, but who cares when it’s three baby raccoons competing for their turn on a procyonid playground:

This video clearly doesn’t show the real first hops of the joey, but it’s still ineffably cute. The YouTube notes are below:

Jellybean is a part of The Australian Reptile Park’s eastern grey kangaroo family which visitors to the Park are able to walk freely amongst and hand-feed them. This hands-on interaction with an Aussie icon is often a highlight to both domestic and international guests.

And two “stuck bear” rescue videos sent by reader Tyler. Humans can be nice, especially when rescuing bears! The first video shows a big bear with its head stuck in a bucket, the second a bear stuck in a barrel. In both cases things end well.

A squee to end the day. Like many animals, newborn elephants must walk almost immediately after birth, as the herds move around. They don’t have nests like birds. Here’s a newborn African elephant (Loxodonta africana) learning to stand and walk. It’s a bit wobbly, but mom tries to help.

We had only a soupçon of science today, but there will be more tomorrow. In the meantime, enjoy this baby otter and its friend the Bengal cat:

I’m going to shamelessly steal this entire story from the BBC site because it’s so damn funny. Click on the headline to go to it, but the entire text is below: 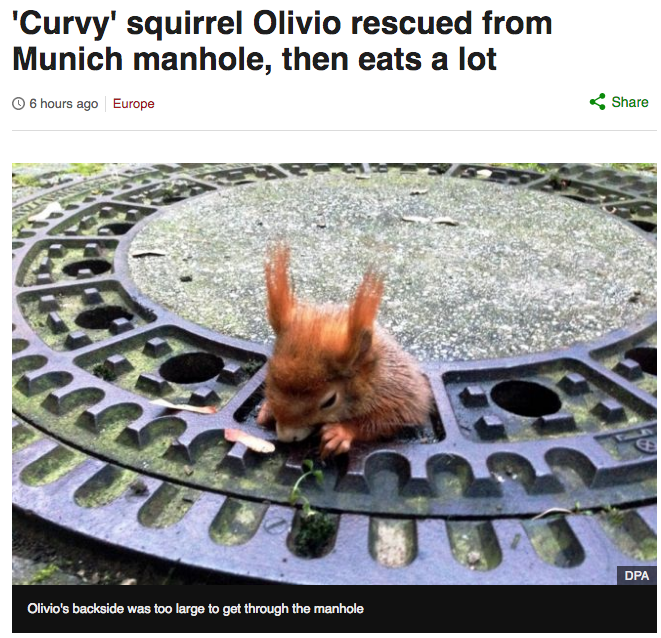 A red squirrel who got stuck halfway through a manhole cover thanks to his curvy hips is recovering after a lengthy rescue operation in Munich.

Initial attempts to free the animal by slathering him in olive oil failed, with his huge behind preventing him from squeezing his way out.

He was finally freed after animal rescue services lifted off the cover and eased his head through the hole.

Locals have nicknamed the squirrel “Olivio” after his oily encounter.

After the ordeal on Friday, an exhausted Olivio was wrapped in a warm towel and fed glucose, local media report.

Staff at a local animal shelter say Olivio is recovering well and has now moved on to a diet of Christmas nuts.

“Now he is eating a lot and sleeps all the time.”

The BBC was unable to verify the size of Olivio’s behind.

That last line is a classic.

Here’s the original headline from the German paper online, with the lovely German word for squirrel (click on screenshot to go to story auf Deutsch): 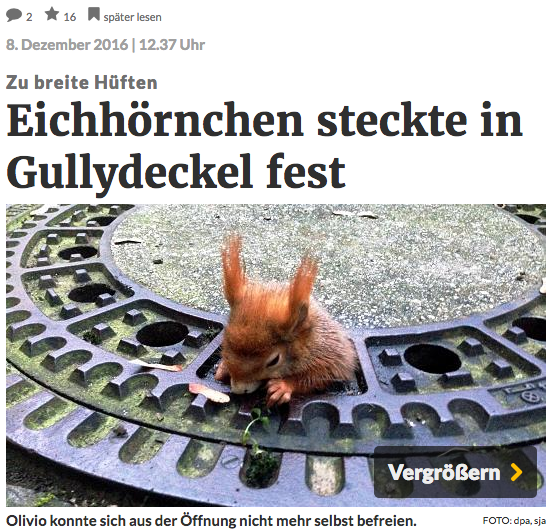 Olivio can no longer free himself from the hole

I suppose this is a juvenile of the big red kangaroo, but Aussies can weigh in here. At any rate, it’s adorable:

I’ve noticed that the evening news on television always ends on an upbeat note, clearly designed to leave the audience feeling good—and perhaps to tune in the next day. So today I’ll do the same, showing two adorable beasts interacting in the bathtub. The capybara (Hydrochoerus hydrochaeris), is, of course, the world’s largest rodent, and can weigh up to 66 kg (145 pounds!). I’m told they’re good to eat, but they’re too cute to kill. They’re South American and largely aquatic, and so could be on the way to becoming hippo-like, or even whale-like. But on to the squee:

From boingboing, which notes:

“This is JoeJoe the Capybara, enjoys baths and hanging out with baby ducks.”