Several readers sent me links to this news from Florida about on one county’s book-vetting initiative, designed to remove books from the classroom if they could corrupt students, turning them into Lefists or, god forbid, “grooming” them. But all schools in Florida, as per a new law, will eventually be experiencing this tsouris.

First, demarcated by the red dots, is Manatee County on Florida’s west coast. It’s not irrelevant to this story that Republican Ron DeSantis, who passed the “Stop WOKE Act” banning the teaching of CRT in Florida’s pubic schools, is the governor. (Though I suppose I could be described as “anti-woke,” I do not favor banning the teaching of CRT and certainly oppose this kind of censoring of schoolbooks.) 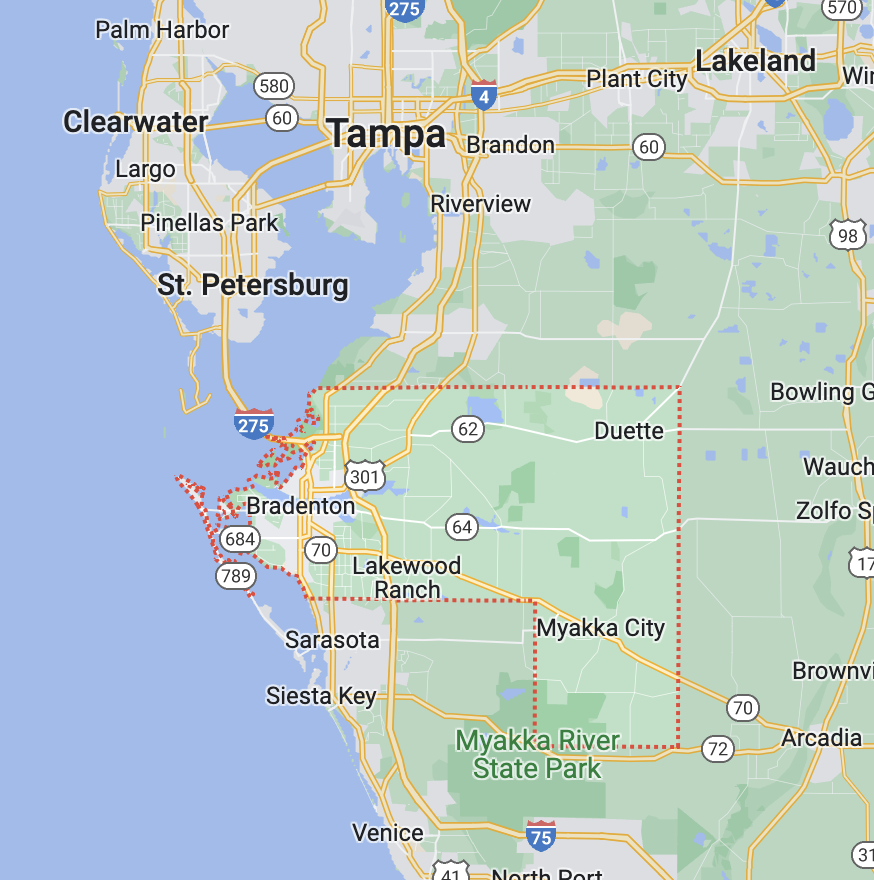 You can click on either story below. The first is from the Sarasota Herald-Tribune, and the second, which has more information, is from Judd Legum’s Popular Information website.  I’ll cite quotes as being from either SHT or PI.

From Popular Information by Judd Legum:

What happened here? To comply with a new Florida law, the Manatee County school district told all school principals in the county, including those heading both public and publicly-funded charter schools, that they couldn’t have any books in their classrooms that had not been approved by a “certified media specialist”.  Some of the books have already been approved by the schools’ libraries, but there may be other “dangerous” books in the classroom libraries. To have any book in the classroom, it has to be approved.

PI gives the criteria for approval (my bolding):

In Florida, school librarians are called “media specialists” and hold media specialist certificates. A rule passed by the Florida Department of Education last week states that a “library media center” includes any books made available to students, including in classrooms. This means that classroom libraries that are curated by teachers, not librarians, are now illegal.

The law requires that all library books selected be:

2. Suited to student needs and their ability to comprehend the material presented.

3. Appropriate for the grade level and age group for which the materials are used or made available

Chapman says that school principals in Manatee County were told Wednesday that any staff member violating these rules by providing materials “harmful to minors” could be prosecuted for “a felony of the third degree.” Therefore, teachers must make their classroom libraries inaccessible to students until they can establish that each book has been approved by a librarian.

Thus the teachers have to check every book in their classroom library to see if it’s already in the district catalogue of books that don’t purvey WRONGTHINK. That means that teachers have to go through each book to do this cross-checking. If the book is not on the already-approved list, it has to be individually checked out and approved by a media specialist.

Note that all three categories are subjective. Does pornography rule out The Catcher in the Rye? Who can tell students that they can’t read a book because they can’t “comprehend it” or because it’s not “appropriate for them”?

Granted, we don’t want classrooms full of Hustler magazines, but the criteria above, being almost completely subjective, demand that someone be appointed to judge the appropriateness of books for kids.  And the results will depend on the censor, of course. Would you want a censor for your kids’ books? If so, who you want, and what criteria should they use? Remember, public schools go up to twelfth grade in America, with the students being 18 years old. That’s old enough to handle almost everything. For crying out loud, I was reading all of this stuff at that age.

If someone’s going to decide, I’d prefer to leave it to each classroom teacher, for he or she knows their students and what they need.

It’s going to be a big job. Below we get an idea of who’s being the censor (from PI; my bolding):

Similar policies will be implemented in schools across Florida. Some Florida schools do not have a media specialist, making the process even more cumbersome.

That review must also be consistent with a complex training, which was heavily influenced by right-wing groups like Moms For Liberty and approved by the Florida Department of Education just last week. Any mistake by a librarian or others could result in criminal prosecution. This process must be repeated for any book brought into the school on an ongoing basis. But librarians and teachers are not being provided with any additional compensation for the extra work.

The teachers aren’t on board with this, of course. Here’s a photo of one classroom library that a teacher just covered up with construction paper rather than have every book vetted. Free the books! 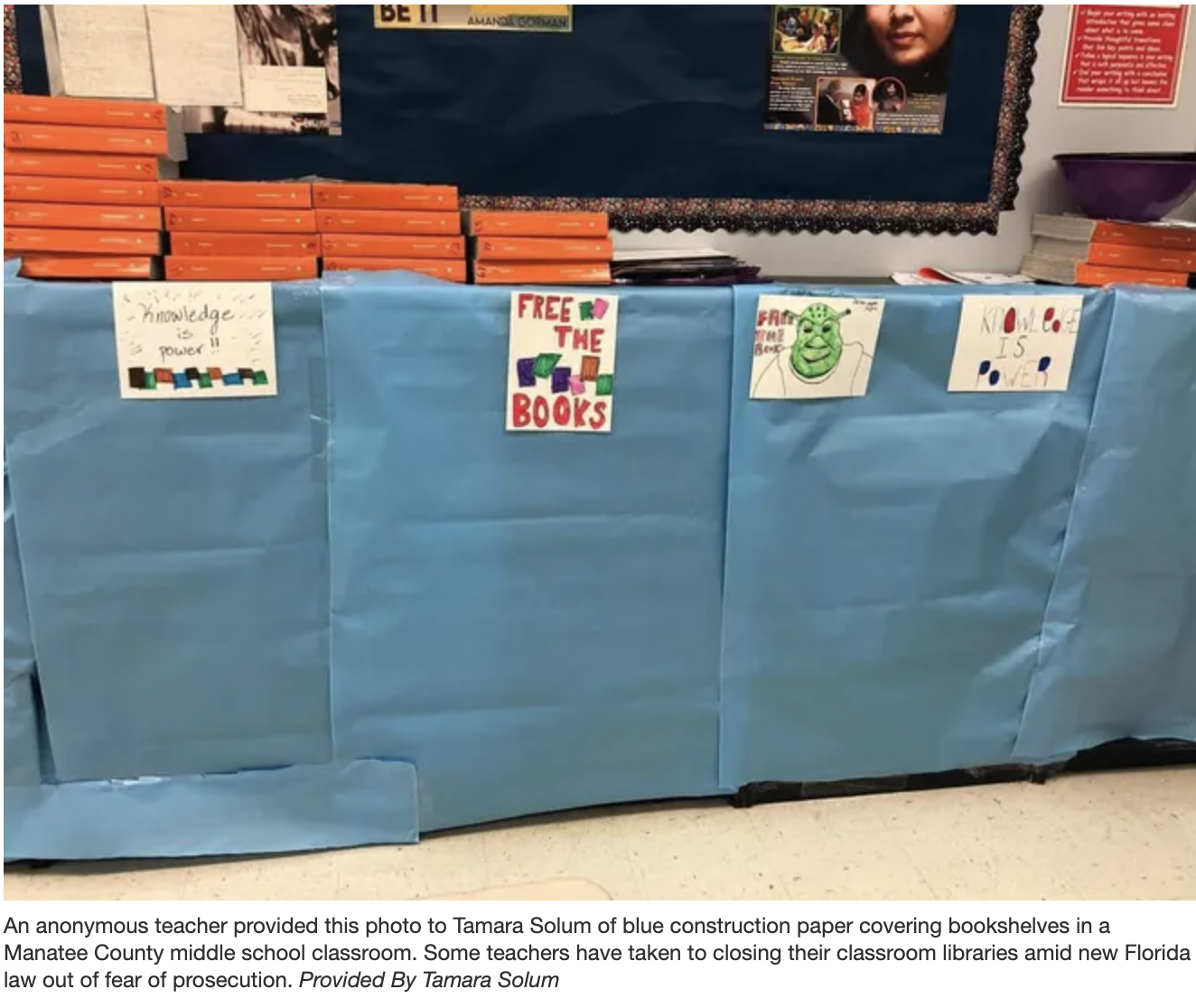 Note that, according to the tweet below, the posters were made by the students, not by the teachers:

Here’s another classroom in a high school:

Photo of a classroom library at Bayshore High School in Manatee County, Florida after they banned all classroom libraries. Florida considers books to be more dangerous to students than assault rifles. This is truly a dystopian state. pic.twitter.com/CizSGR40ub

And a few statements from teachers:

Jean Faulk, a history and journalism teacher at Bayshore High, had to remove books on democracy and writings from John Adams because they weren’t vetted in the district’s library system. Her bookshelves are now only lined with reference books, she said.

“This is totally a political move by the governor,” Faulk said. “It has nothing to do with the students.”

From PI, a future felon speaks:

One high school teacher in Manatee County told Popular Information that they would not comply with the new policy. The teacher has spent the year carefully curating books donated by parents or sourced from their personal collection. “I’m not taking any books out of my room,” the teacher said. “I absolutely refuse.” The teacher spoke on the condition of anonymity, fearing that speaking out about the policy could put their job at risk.

and a book libertarian speaks:

Stephana Ferrell, a co-founder of the Florida Freedom to Read Project, said the new policy followed “a pattern of fear-based decisions that prioritize staying in good favor with the Governor over doing the right thing for our students.” Ferrell said she blamed “the Florida Board of Education that passed this rule change last Wednesday without an ounce of consideration for its impact.” Now, “thousands of students are without classroom access to fun and engaging literature.”

Ironically, Manatee County is making thousands of books inaccessible to students just in time to celebrate “Literacy Week” in Florida, which runs from January 23 to 27. Only about 50% of students in Manatee County are reading at grade level.

This is a good argument for freedom of speech. For now we see what happens when right-wing governments have the right to censor, and it’s not pretty.

What’s the alternative, then? Do we allow every book in the classroom? Clearly that wouldn’t be either appropriate or practical. But I trust these decisions to be made by teachers rather than ideologues like DeSantis. And books should get the benefit of the doubt. 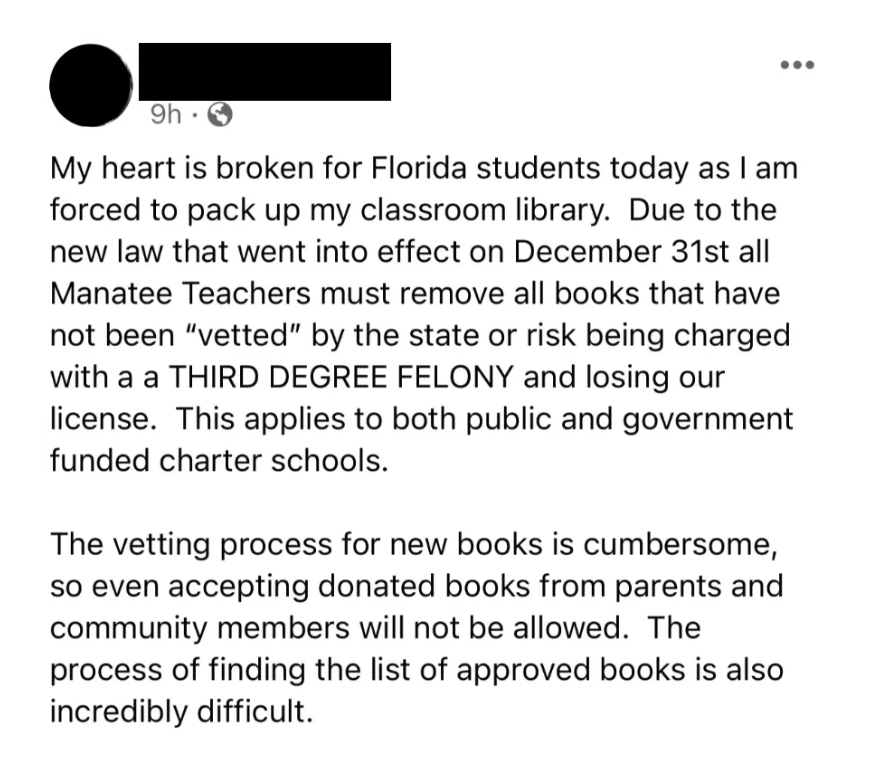