The other day I was kvetching about wokeness to two members of Team Duck, and moaning that the “movement” wouldn’t go away for years. Both of them assured me that I was wrong, but I didn’t think so. Now, with the publication of the article below from Inside Higher Ed (IHE), I think there may a smidgen of hope. That’s because widespread mockery has caused a university to eliminate a list of words considered harmful. Remember, mockery can be an effective weapon in the fight against the benighted.

First, a review. The Wall Street Journal first cited the Stanford “Elimination of Harmful Language Initiative,” which I mentioned in a Hili post. It was a guide to language that was supposed to be used at Stanford University’s IT group. Here’s what the IHE article below notes about the words recommended by Stanford for erasure (there were many more: around 150 in total):

The 13-page guide contained more than 150 words and phrases organized into 10 categories of harmful language: ableist, ageism, colonialism, culturally appropriative, gender-based, imprecise language, institutionalized racism, person-first, and violent words and phrases. Words and phrases such as “brave,” “seminal,” “American,” “take a shot at,” “no can do” and “submit” were deemed harmful.

“Brave,” according to the guide, was deemed harmful for perpetuating stereotypes of the “noble courageous savage.” (The guide did not recommend a replacement for this word.) Instead of “seminal,” readers were encouraged to use “leading” or “groundbreaking,” so as not to reinforce male-dominated language. Instead of “American,” the guide recommended “U.S. citizen,” to avoid insinuating that the U.S. dominates the Americas. The guide also recommended that “give it a go” take the place of “take a shot at” to avoid violent imagery. “No can do,” per the guide, should be replaced by “I can’t do it,” since the former originated from stereotypes that mocked nonnative English speakers. The guide recommended replacing “submit” with “process,” as the latter “can imply allowing others to have power over you.”.

A few days later I noted that Stanford’s Language Police backed off on only one word; they decided it was okay to use the word “American.” The rest stayed on the list as verboten language.

Now, glory be, and after widespread mockery, Stanford has rescinded the entire list.

Does that mean there hope that wokeness will disappear? Well, remember that I reported yesterday on USC’s new “progressive” drive to get rid of the word “field”, apparently because it’s associated with slavery, though the word, meaning, “plot of farmed land”, goes back centuries. So maybe some are overly optimistic that this type of illiberal ideology is on its way out. I reserve judgment.

The article describes other schools, like The University of Texas at Austin, Brandeis, the University of San Francisco, and Indiana University’s library system, that also have recommendation against “harmful” language and have begun projects devoted to identifying it. But the highlight today is Stanford’s backing off of its long list, culminating with a letter from the University’s President saying “we goofed up”, and then with removal of the entire guide from the University’s website. It’s gone. It is an ex-guide, singing with the Choir Invisible. From IHE:

The Elimination of Harmful Language Initiative “was created to address racist terms historically used in IT, such as ‘master’ and ‘slave’ to describe aspects of systems,” Gallagher wrote in a statement. “The feedback that this work was broadly viewed as counter to inclusivity means we missed the intended mark. It is for this reason that we have taken down the EHLI site.”

In a community letter, Stanford president Marc Tessier-Lavigne acknowledged the good intentions of the university staff who sought to promote inclusivity. But he also reiterated that “at no point did the website represent university policy” and affirmed that Stanford’s “efforts to advance inclusion must remain consistent with our commitment to academic freedom and free expression.”

Here’s an excerpt of the letter from President Tessier-Lavigne, emphasizing the priority of free speech over language policing: 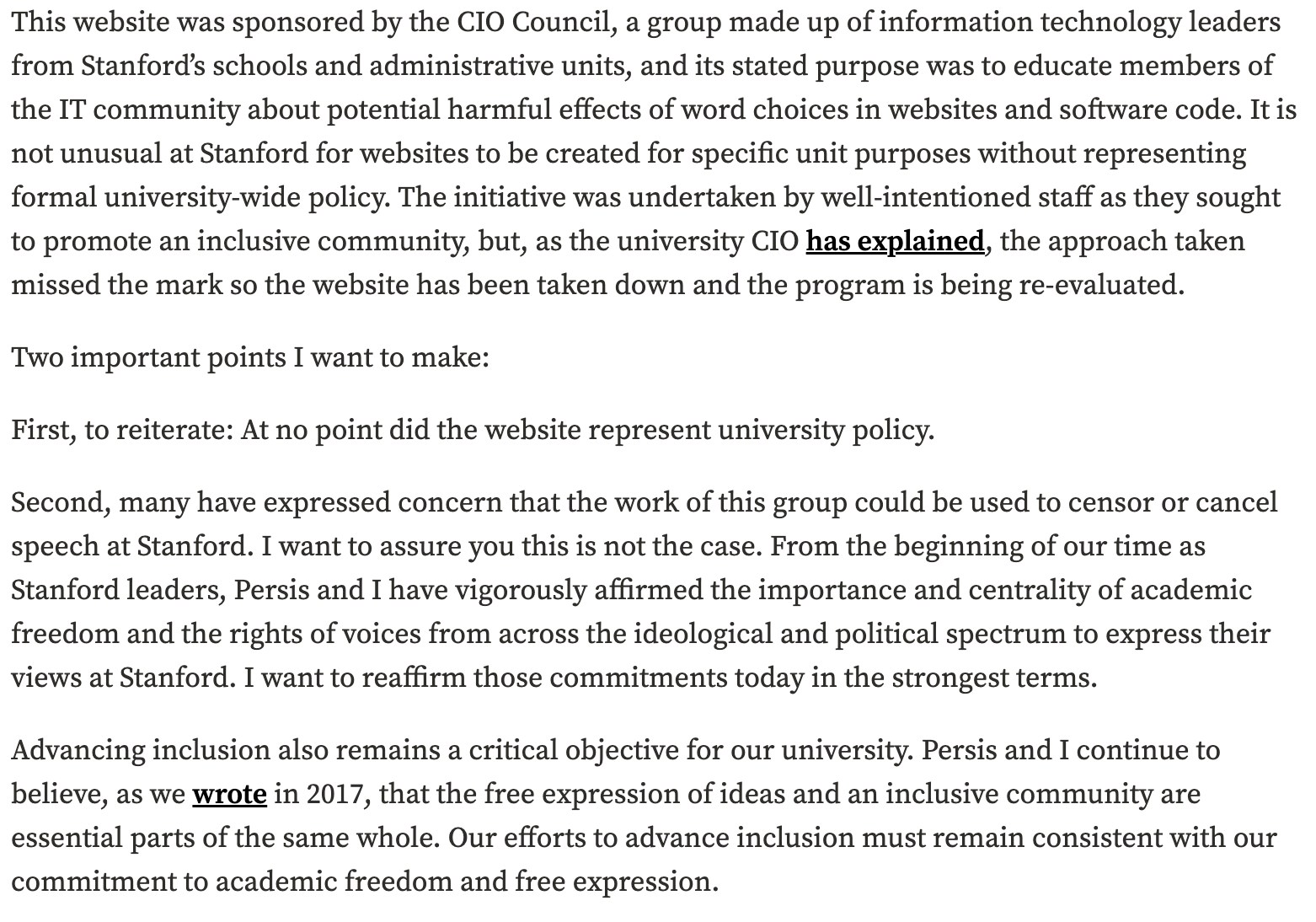 Although, some language really shouldn’t be used except in a didactic sense because it truly is offensive (the n-word is one, and another, in my view, is “master” and “slave” when referring to electrical devices), the Stanford list went way too far, resulting in widespread mockery of the University. The only real backlash cited by the article, though, is that given in the WSJ:

“Parodists have it rough these days, since so much of modern life and culture resembles the Babylon Bee,” the Wall Street Journal editorial board wrote on Dec. 19, referencing the satirical website that is sometimes referred to as a conservative version of The Onion.

Finally, there’s a bit of pushback—even from members of “marginalized groups”—in this case a Jewish man:

“The inclusion of ‘Jewed’ as a verb is warranted because it clearly associates being Jewish with a negative stereotype,” Josh Yuter, a rabbi who was ordained by Yeshiva University and was named a National Jewish Outreach Program top 10 Jewish influencer in 2012, said via email. “Including ‘hip-hip hooray’ as ‘harmful language’ towards Jews is less understandable. Until reading the initiative I had no idea that a variant of ‘hip-hip hooray’ was a German rallying cry during the Holocaust, and I suspect few others would as well. I cannot speak to traumas experienced by actual survivors, but I would be very surprised if ‘hip-hip hooray’ was passed down as intergenerational trauma to merit inclusion as being ‘harmful’ in any way.”

The origins of this phase predated Nazi Germany, Yuter added. “Even if we accept language evolving such that innocuous idioms may turn into harmful speech, it stands to reason that harmful language can evolve further and resume being innocuous.”

Yuter, reflecting on Stanford’s public relations debacle, likened it to a recent controversy over a New York Times crossword puzzle that resembled a swastika.

“The design is common in crosswords and unnoticeable to many unless someone points it out,” Yuter said. “However, people who want to be offended will always find their reasons if they look hard enough. I believe the same is true here.”

The rabbi is right. But “field” didn’t evolve in general meaning at all: it simply was used in a phrase associated with slavery (“field hand”), and now that phrase is outdated. And yes, “hip-hip hooray” was indeed on Stanford’s list. Only the offended would have even traced back its meaning so that it could be singled out for elimination. There are many woke people trawling through the dictionary looking for words that are offensive and that they can tell us not to use. That reminds me of the famous anecdote about Dr. Johnson and his dictionary, which goes something like this:

After Samuel Johnson published his masterful dictionary of the English language he was reportedly approached by two prudish individuals:

“Mr. Johnson, we are glad that you have omitted the indelicate and objectionable words from your new dictionary.”

“What, my dears! Have you been searching for them?”

But I reiterate: mockery can be a powerful weapon. In this case it forced the President of Stanford to retract a policy of one sector of the University.