This morning I mentioned in Da Nooz that, according to the Wall Street Journal, Stanford University had undertaken an 18-month “Elimination of Harmful Language Initiative”, which gave a long list of words deemed harmful or offensive and suggesting replacements. Some of the words were ones I wouldn’t use, while many others are on the border of risible. You can see the whole language guide at this site, which even comes with its own trigger warning:

(I love the “please engage with this website at your own pace”, suggesting that “normally, you’d hurry through this list but we’re being nice by advising you to take it slow”.)  I recommend that you have a look at the list and see which words you also find offensive.

They also suggest alternatives, like using “person who is/was incarcerated” instead of “prisoner”, the grounds being “using person-first language helps to not define people by just one of their characteristics”. Of course if you take that seriously, then you can’t use the terms “professor,” “baseball player,” or “jackass” to refer to people.

At any rate, and probably due to the WSJ editorial, Stanford got a lot of blowback, and decided to remove one word—but only one—off the list. I’ve put a red rectangle around it in the announcement below, hastily issued yesterday. Notice that the language guide was also intended to apply only to the IT community, though there’s no reason why it shouldn’t—if you approve of Language Fascism—apply to Stanford as a whole. 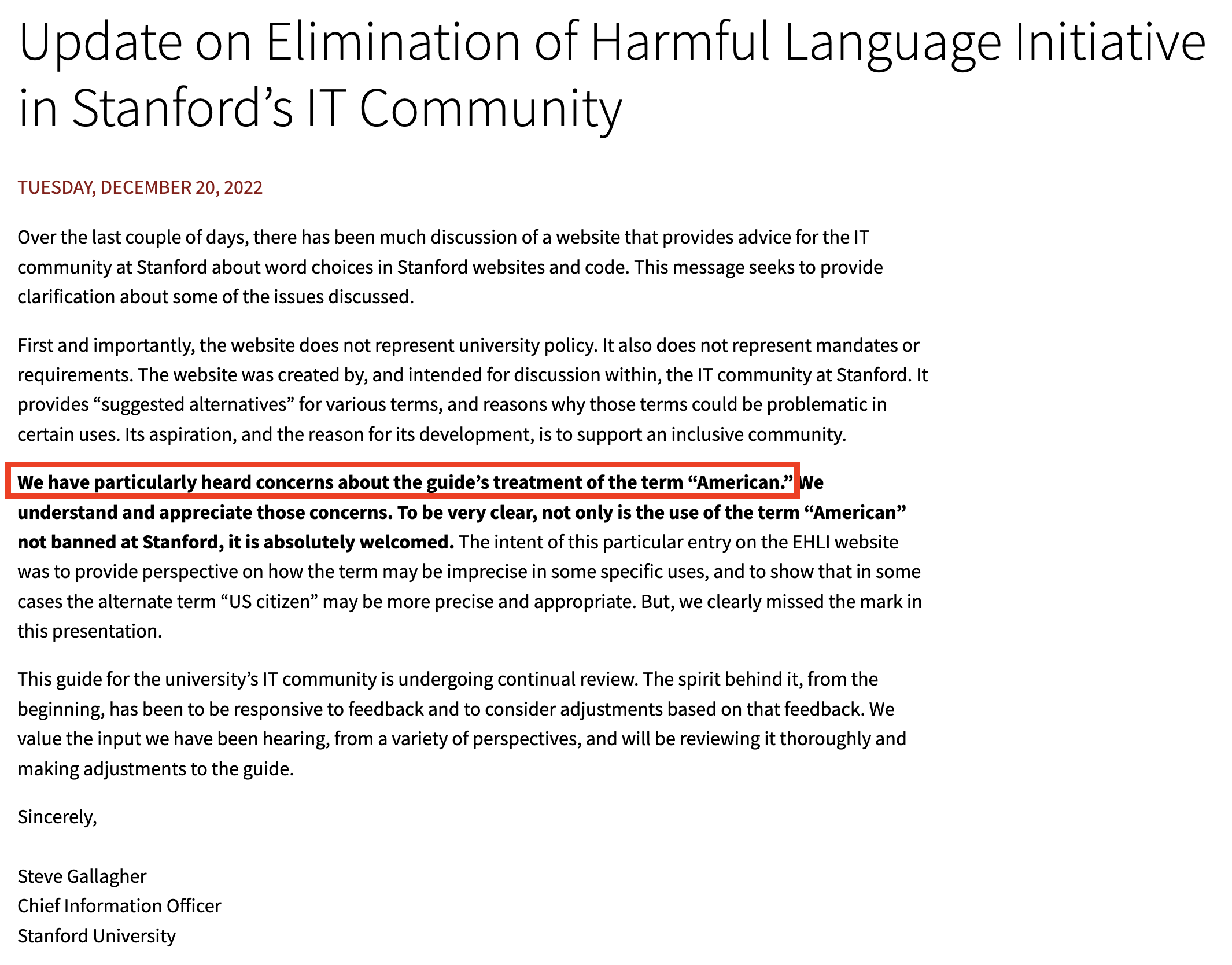 Why did they recommend deep-sixing “American” in the first place? It’s still there, and here’s what they said:

Yeah, that’s pretty stupid, because everyone knows that “American” means “someone from the U.S.,” and I’ve never heard anybody say that’s offensive. (You can say “Canadian”, “Brazilian,” “Colombian”, and other words to narrow down countries.) At least they admit that they “missed the mark”.

Now maybe they should look at other words too, like “submit”, which is offensive because “Depending on the context, the term can imply allowing others to have power over you.”  Which they do, of course: “I submitted to their punishment.”  The fact is that some people do have power over you—that’s life. I doubt that “accede” would be any more acceptable, but they suggest using the word “process”, which makes no sense at all.

Now’s a good time to read or reread Orwell’s great essay, “Politics and the English language.”

66 thoughts on “Stanford’s IT language police back off, but only about one word”