Today’s photos come from Kevin Elskin, who recently contributed some photos of Arkansas waterfalls. This time he goes to Scotland and Northern Ireland. Kevin’s narrative is indented, and you can enlarge his photos by clicking on them.

One of Jerry’s blog readers recently posted their photos of a hiking trip they took around the Kintyre Peninsula in Scotland. Last summer I and three friends embarked on a two week golfing trip that took us to Islands of Arran and Islay (pronounced AYE-la) in Scotland as well as Northern Ireland. I cannot say enough about the wonderful people who live in that gobsmackingly beautiful land. Scotland is derided on account of its weather, though it is surprisingly temperate, so if you hate both hot and cold weather it might be the place for you. If you don’t mind some (?) rain.

I mentioned it was a golf trip. If you have never seen Robin Williams’ describe the invention of golf, please take two minutes of your time to enjoy his brilliance. For me golf is a fun form of exercise, I always walk, and in Scotland you can hire a local caddy and enjoy that along with the scenery. We began our trip on the west coast of Scotland, just south of Glasgow, in the town of Prestwick. Old Prestwick hosted the first Open Championship (the uncouth sometimes refer to this as the British Open) in 1860. In 1868, Young Tom Morris, son of the father of the modern game, Old Tom Morris, became the youngest ever major golf champion at the age of 17. No one, not even Tiger Woods, has matched that feat. Not only that, he won the next three Open Championships, a feat of four Opens in a row that no one has ever matched. Tragically, in 1875, his young wife and child died during childbirth, and Young Tom followed them a few months later, poetically due to a broken heart. Playing golf in the rain did not help his case, either.

Which brings us to the first photo, which is a simple marker at Prestwick noting the first tee location at the 1860 Championship (the course layout was revised in the interim). Note the yardage of 578 yards. That is a huge hole length today, not to mention in the mid 19th century when the technology was hickory-shafted clubs and gutta-percha golf balls. The par of the hole is 5, it is said no one ever made a birdie 4 on the hole, but Young Tom Morris once holed his third shot for an eagle 3. Remarkable. 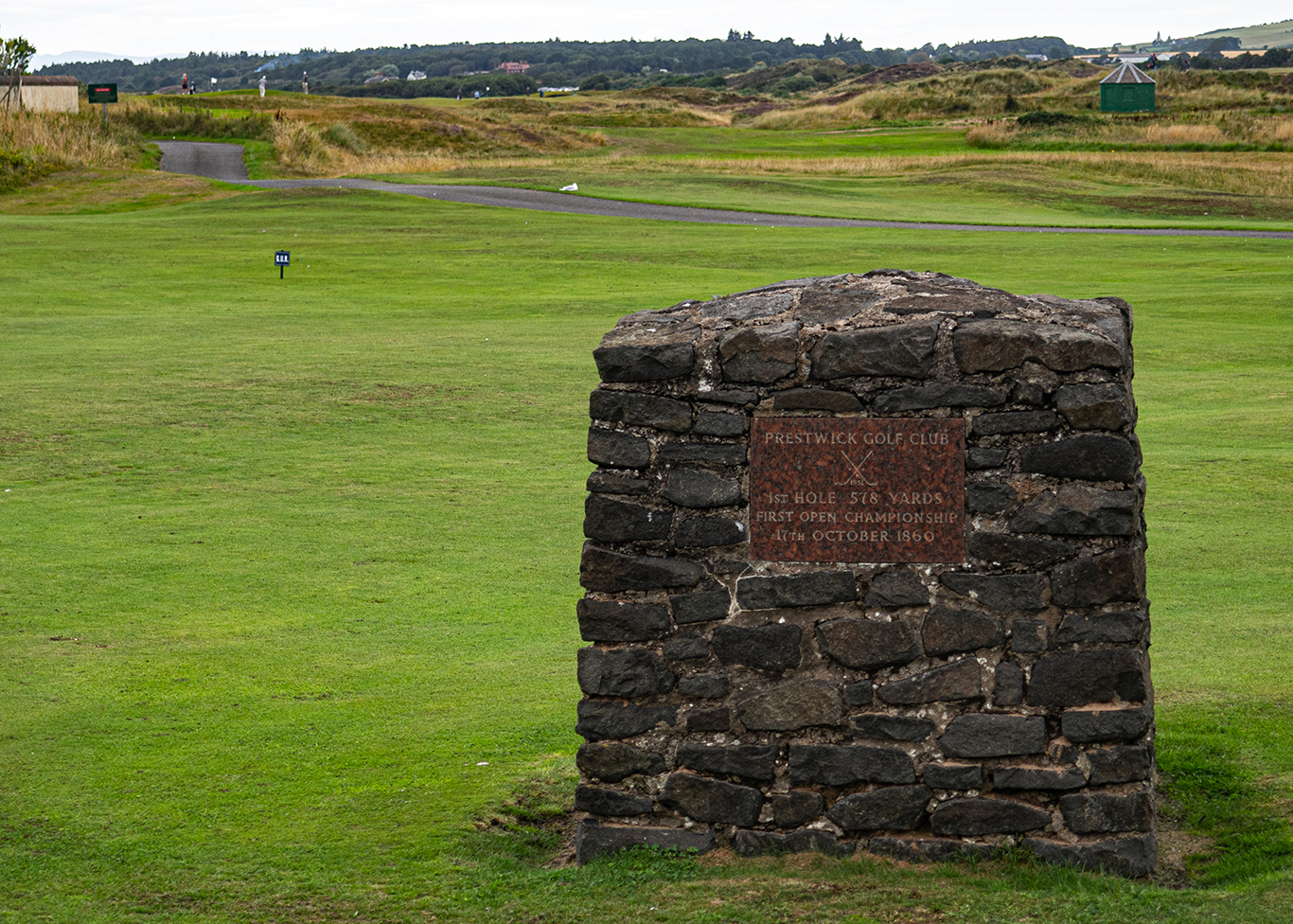 We crossed the Firth of Clyde by ferry and landed on the Isle of Arran. On the crossing I snapped a photo of the returning ferry with the landmark Ailsa Craig in the distance. For you Winter Olympic fans, Ailsa Craig is one of the sources for granite curling stones. 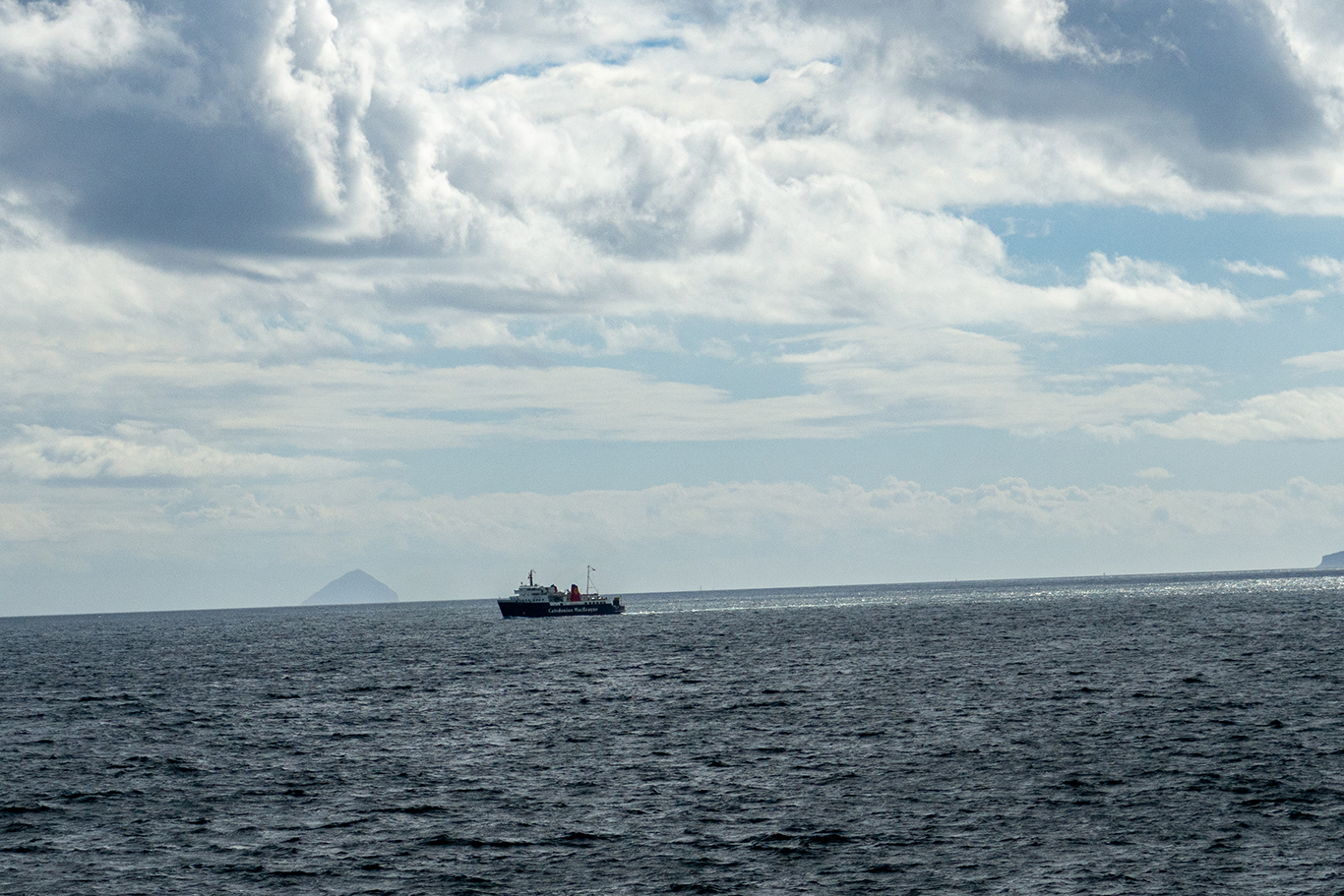 The Island of Arran is less than 200 square miles in size, with a population of around 5000 people. I have heard it said that Arran is a microcosm of Scotland, but all I know it is beautiful. A search of YouTube will turn up many tourist videos if you would like to see and learn more. United Airlines was kind enough to give me a chance to take a snap of the entire island on my return flight: 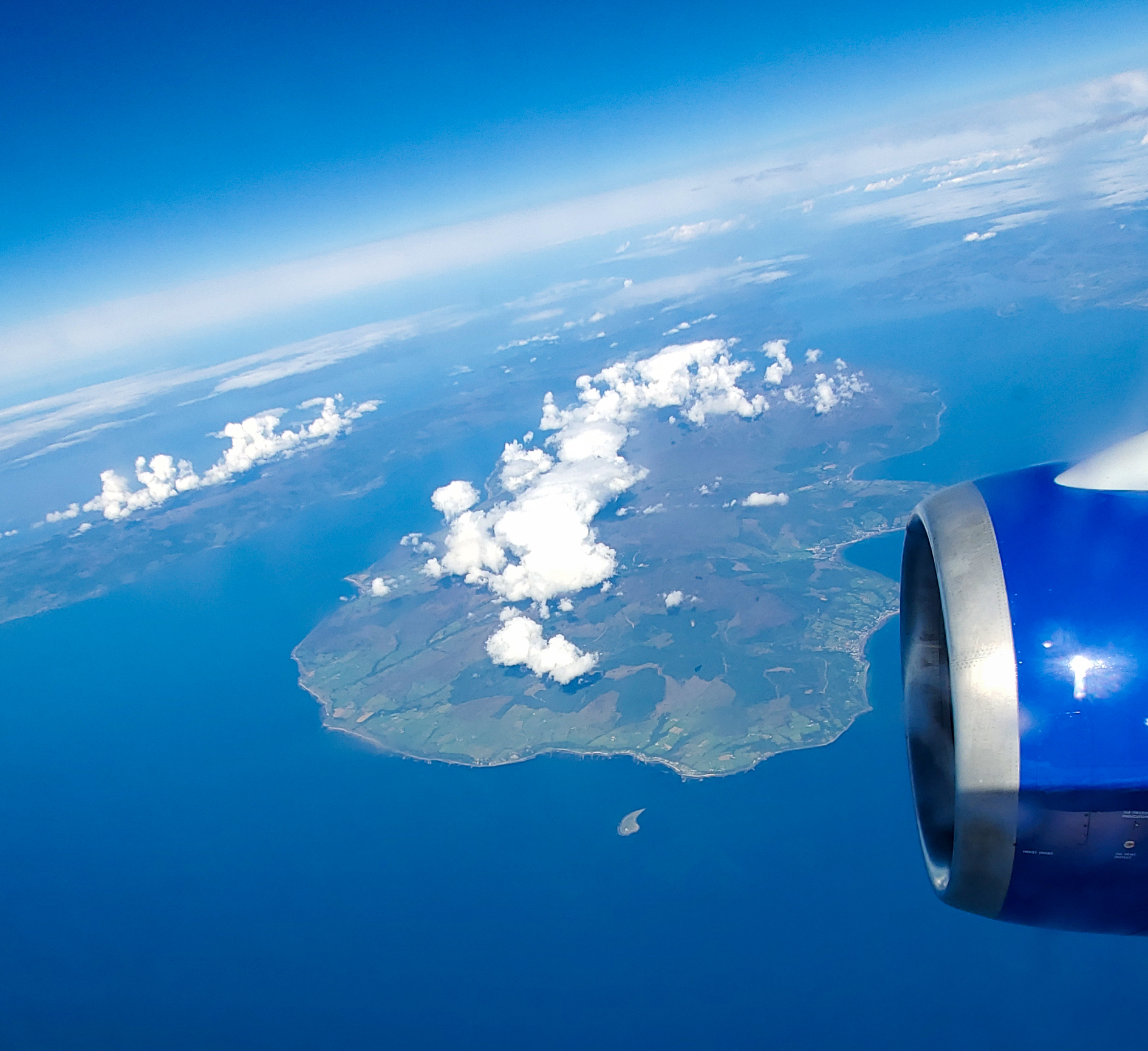 We stayed in the village of Blackwaterfoot on the western side of the island. Not much there: a hotel, a B&B or two, and a couple of restaurants. And a pair of swans if you look carefully. 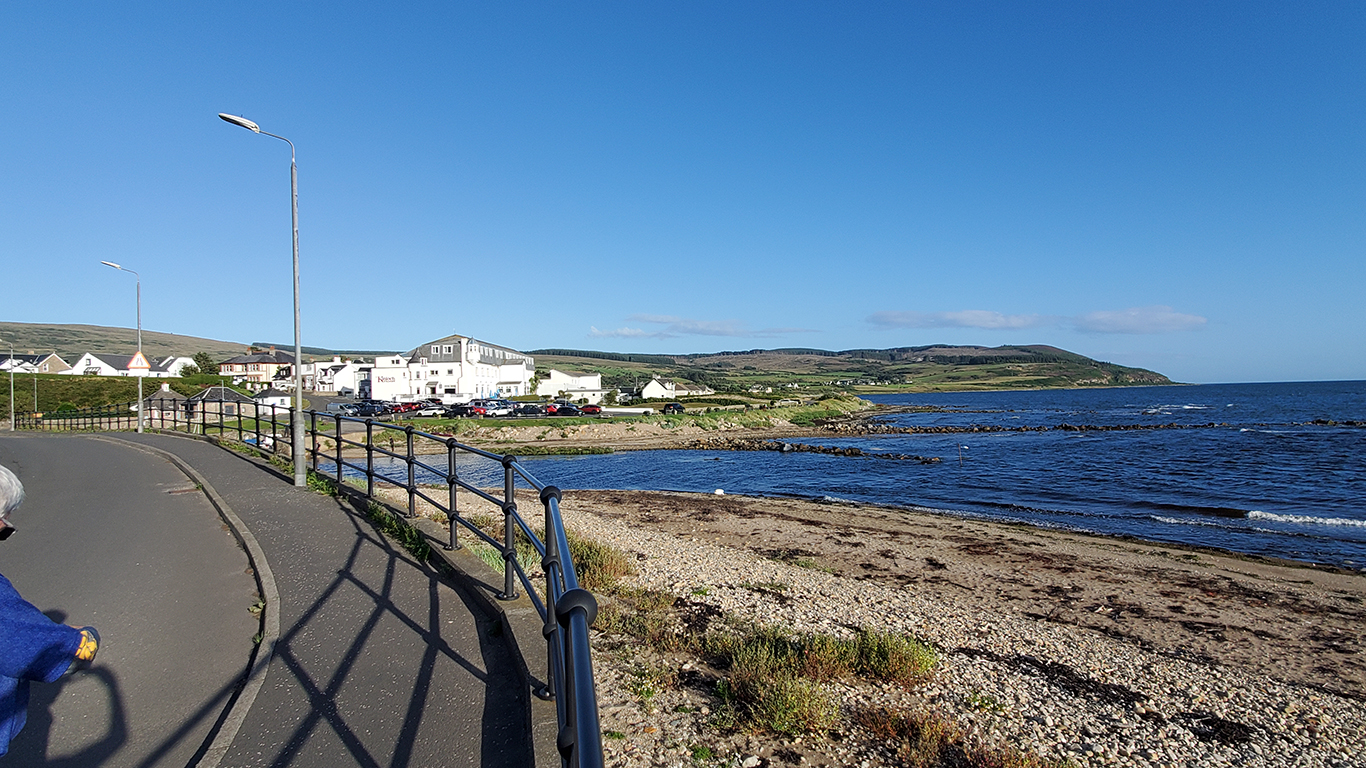 One other attraction in Blackwaterfoot is the Shiskine Golf and Tennis Club. You can keep Pebble Beach and $600 green fees, I will go to Shiskine anytime for a tenth of the cost with views just as compelling. Two photos from the course, the first includes the Kintyre Penisnsula across the water. 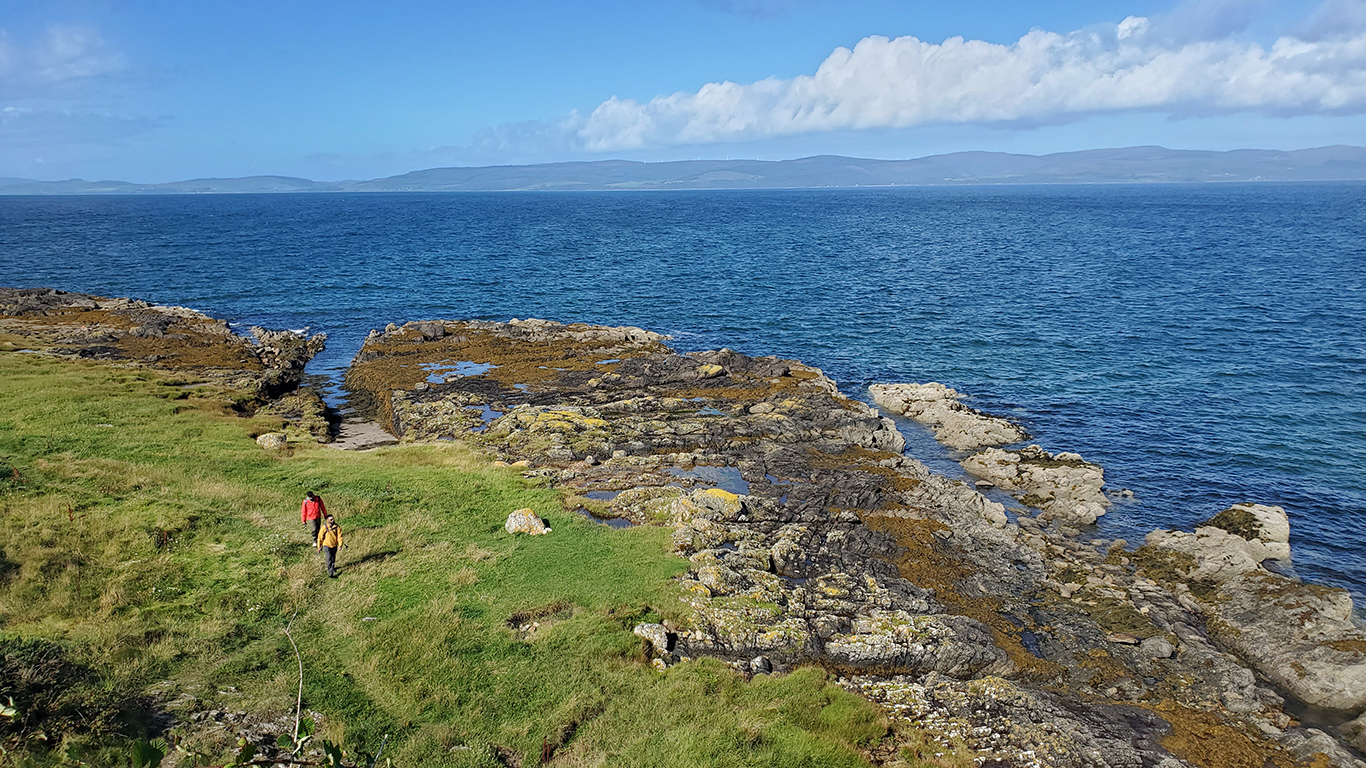 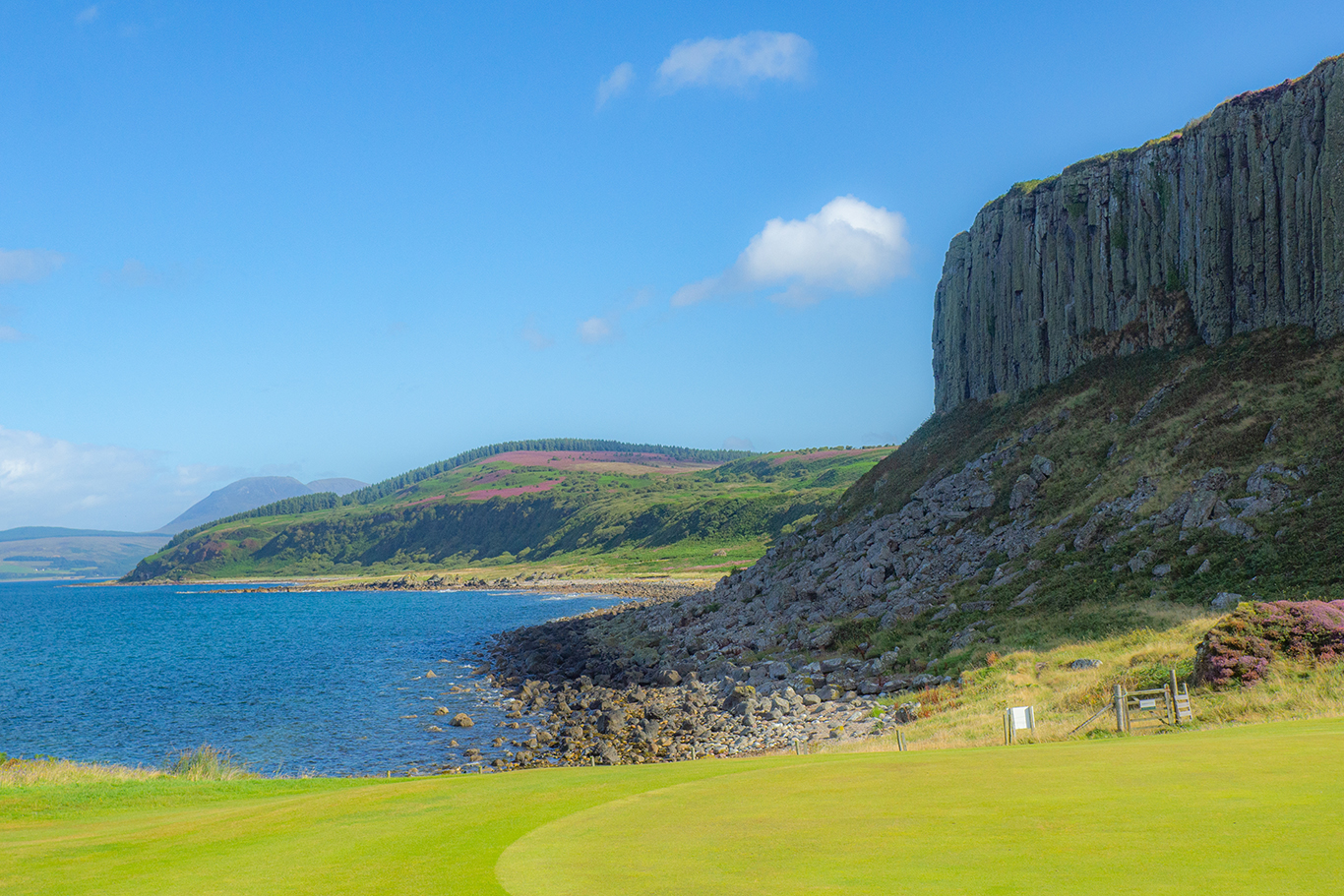 After the round a buddy and I hiked to King’s Cave, a natural cave supposedly visited by Robert the Bruce, who while there was allegedly inspired by a spiders numerous attempts at casting a web. Anyway, a little portrait of the author was taken on the return. 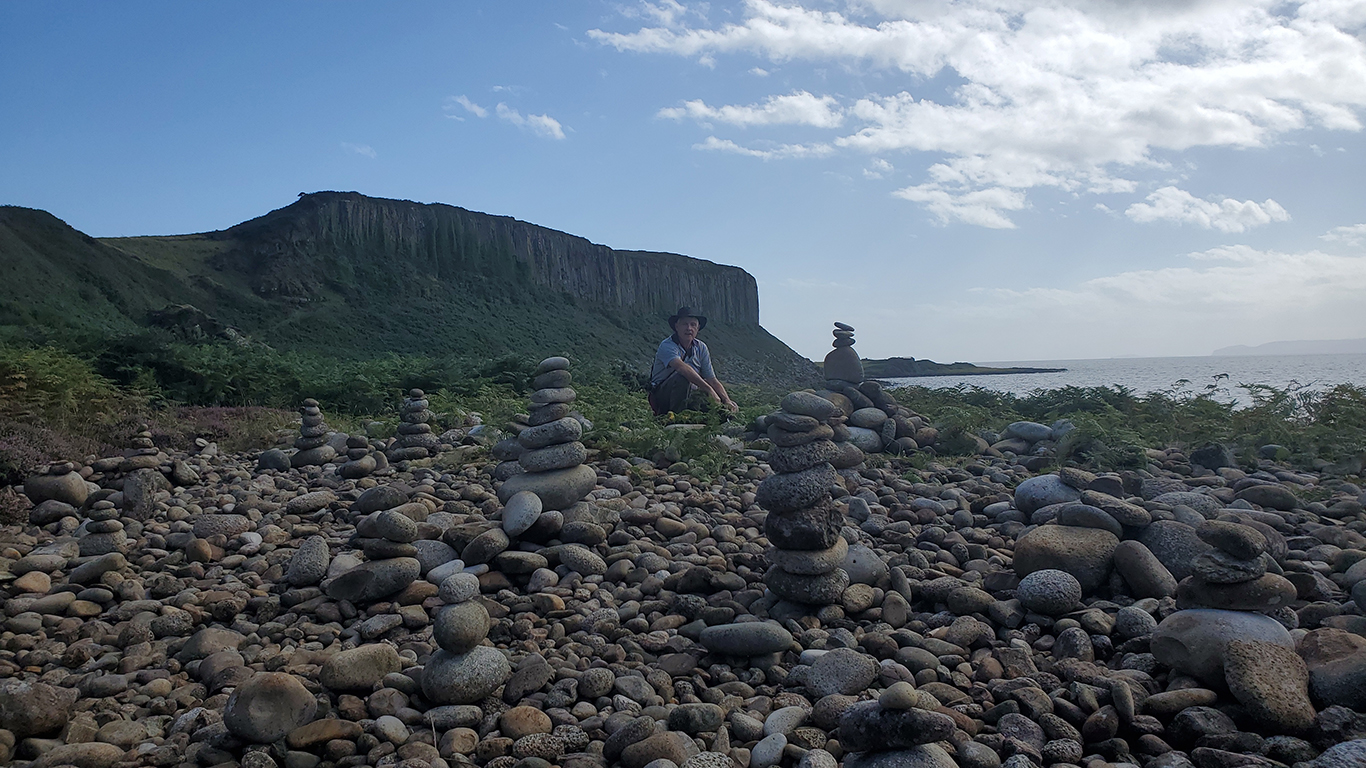 I snapped a photo of a bucolic field of two row barley growing near the golf course. This is of course an important ingredient for the one of the two best known Scottish products, whiskey. Our golf group has the custom of toasting any birdies made by taking a wee dram on the next tee. Luckily we are not that good so we stay pretty sober. We would offer our caddy an opportunity to join us and some did, but quite a few said no, whiskey was their fathers’ drink of choice, not theirs. That said, the distillery business is going great guns and most of the local companies have been bought by the big worldwide liquor companies. Good thing, I guess, as the local economies do struggle, and tourism and whiskey are a good source of jobs. 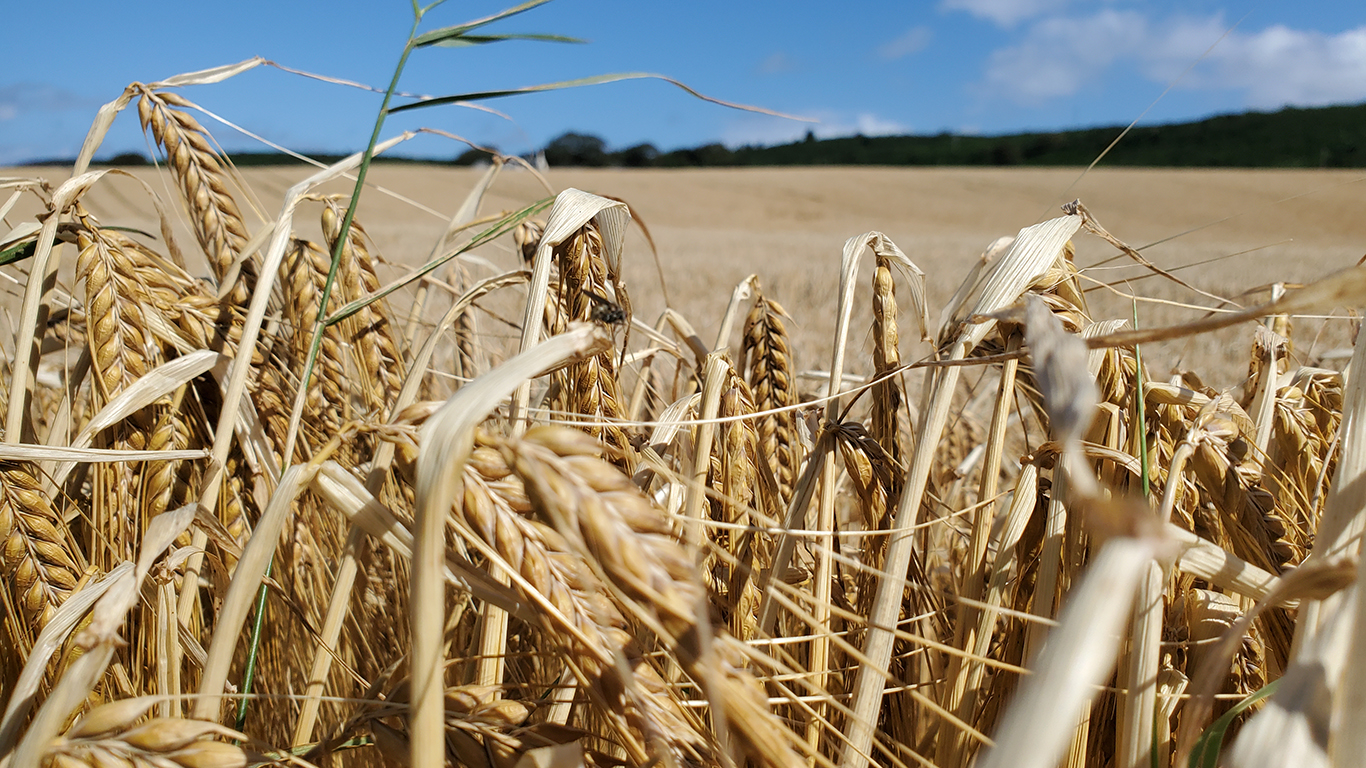 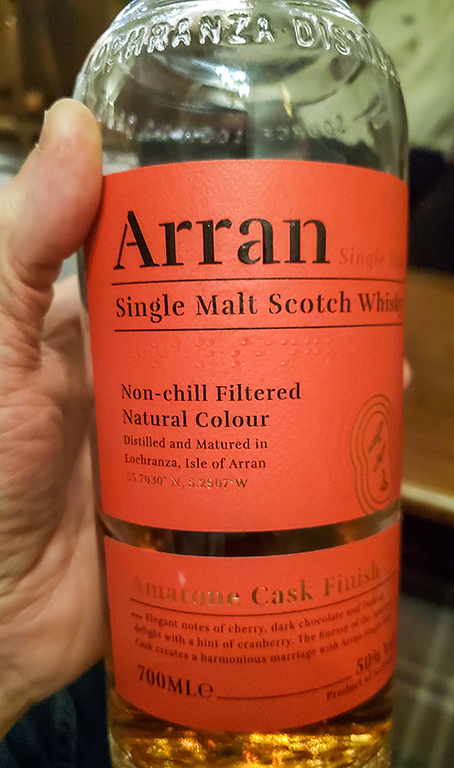 We left Blackwaterfoot and headed north to Lochranza, where ferry service to Kintyre is available. Lochranza is the home of the Arran distillery, and also Lochranza Castle, built in the 13th century but now looking a little rough. 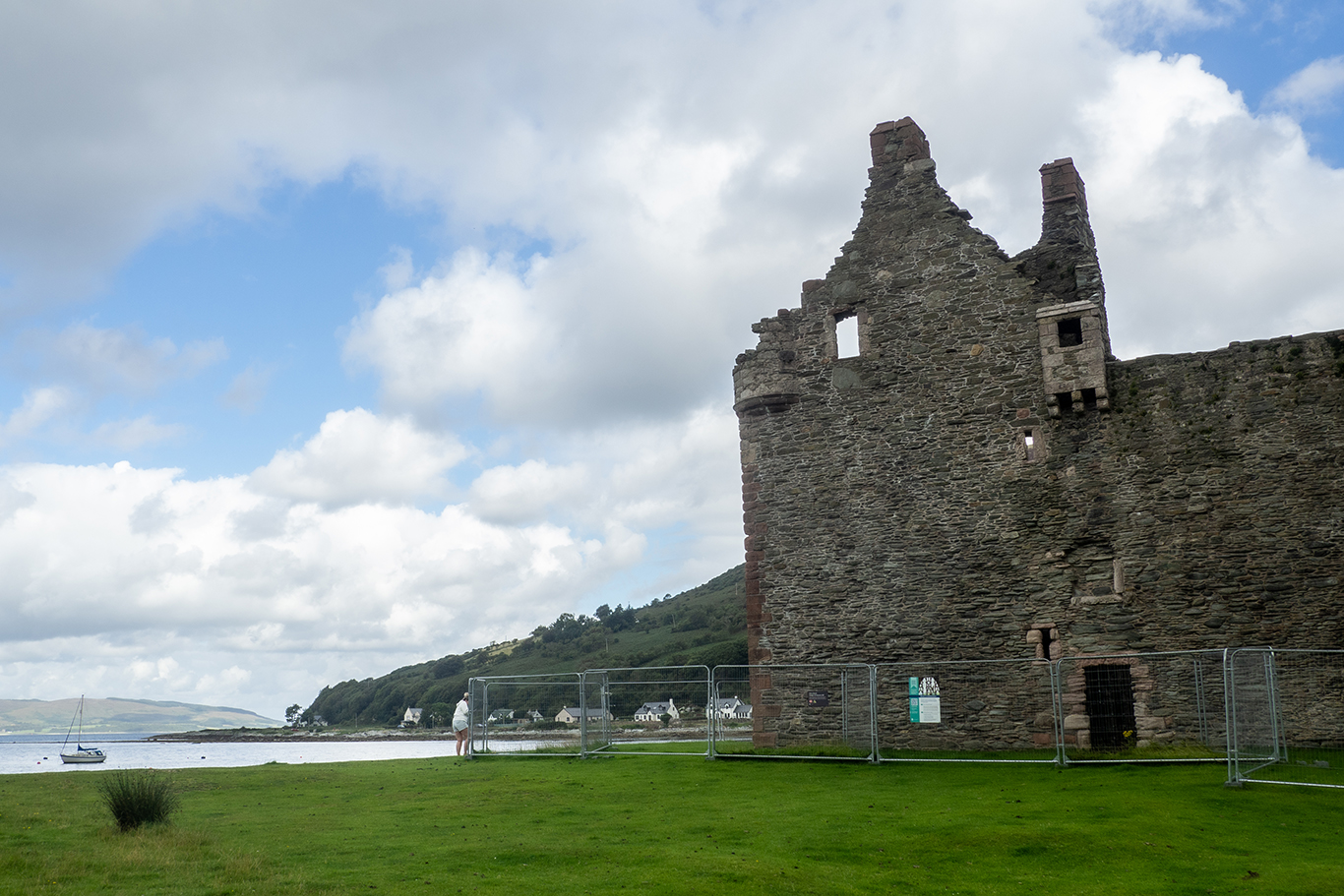 Lastly, if you happen to be in Lochranza and are feeling a wee bit peckish, there is a small sandwich shop located next to the ferry.  I am not one to take pictures of my food, but I made an exception. I have lived over six decades in this world and I have eaten a fair number of sandwiches, but the cumin-butternut squash-with lime pickle and chickpea puree served with robin’s leaves on turmeric hazelnut bread is the best goddam sammitch I have ever tasted. And this is a hill I will die on. 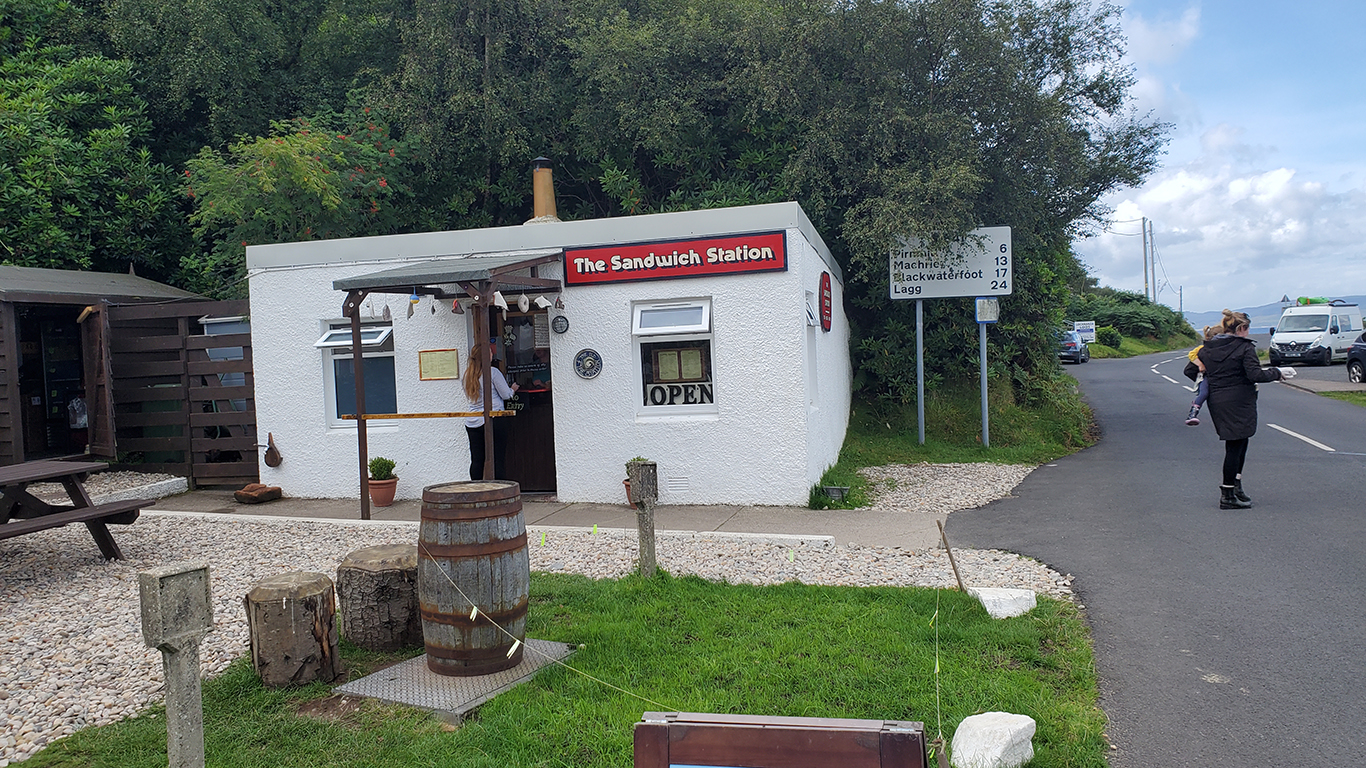 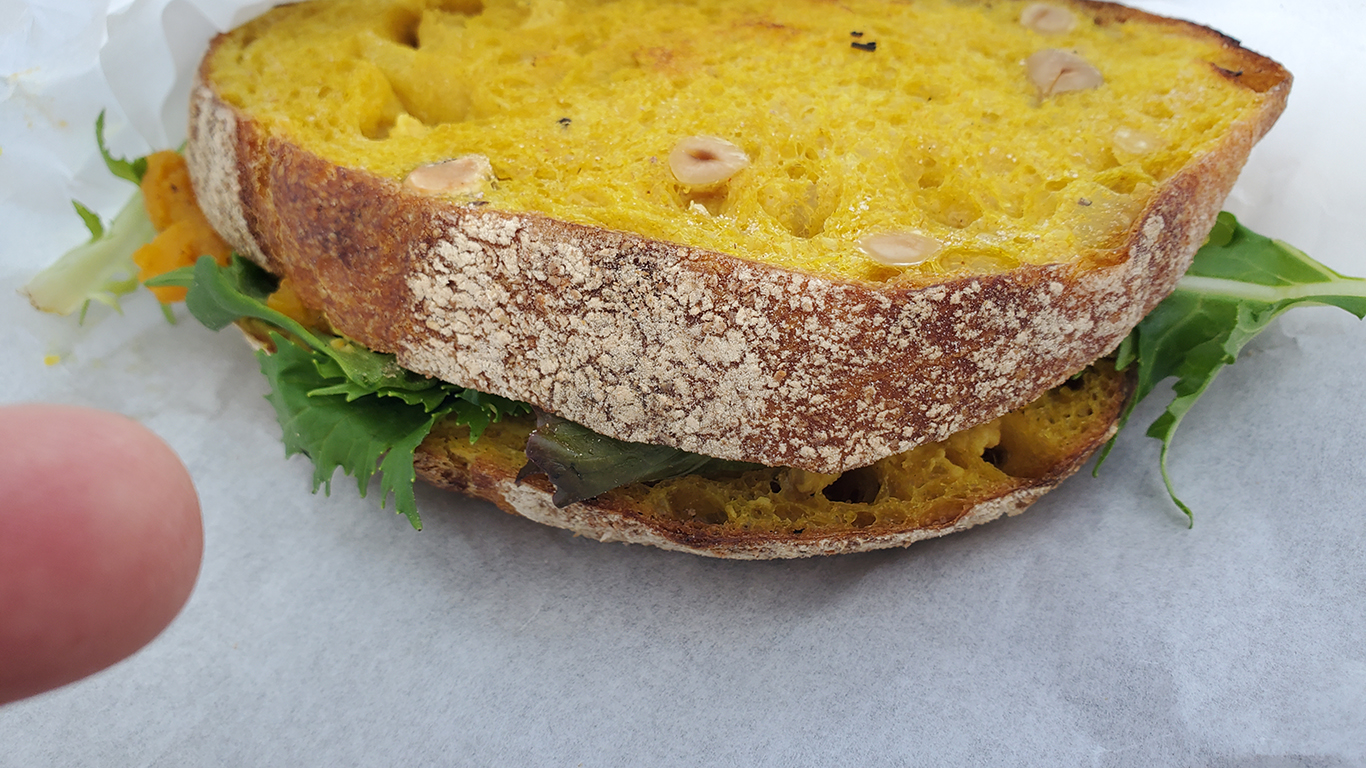