As I’ve reported, Hamline University, a small liberal-arts school in Minnesota, recently fired an unidentified professor who showed two images of the body and face of Muhammad to one of his/her classes. The prof even warned the students in advance that the images would be shown, giving them a chance to opt out. And despite that, and despite the fact that some sects of Islam don’t see it as blasphemy (or didn’t used to see it as such) to show the Prophet’s face, some students complained to the administration, and the instructor was summarily fired. The professor had even apologized, but of course that was not enough. It’s never enough in the face of the mob who wants punishment, not expressions of contrition.

On December 27, FIRE (the Foundation for Individual Rights and Expression), wrote to the President of Hamline urging the school to reinstate the instructor, saying that the firing was a violation of academic freedom and an indefensible act of retaliation. Hamline, however, didn’t back down. As AlphaNews reported on January 3, the University is sticking to its guns.

Hamline University President Fayneese Miller responded to the backlash in a campus-wide email Saturday. In her email, Miller suggested that no instructor is allowed to do anything in class if it goes against any student’s faith.

“Questions about how best to discuss Islamic art have been raised by many academics and is certainly an issue worthy of debate and discussion. For those of us who have been entrusted with the responsibility of educating the next generation of leaders and engaged citizens, it was important that our Muslim students, as well as all other students, feel safe, supported, and respected both in and out of our classrooms. As we have stated, in the immediate aftermath of students’ expressed concerns, the University’s initial response and actions were to address our students’ concerns. And, contrary to what has been reported and become the story, it is important that this aspect be reported. It is also important that we clarify that the adjunct instructor was teaching for the first time at Hamline, received an appointment letter for the fall semester, and taught the course until the end of the term,” her statement continued.

Miller concluded the email by acknowledging that the incident has been “painful for our community.”

This is absurd—even more so given that the students were warned and the works of art displayed were of considerable historic interest. What the university is doing is getting rid of instructors for blasphemy, but blasphemy against only one religion.  Further, I reject the argument that students must feel “safe, supported, and respected” at all times. Were that they case, they could never be subjected to arguments that made them uncomfortable; and then what’s the point of a liberal education? The upshot is that Hamline looks bad, as there have been other complaints, like from PEN America and The Academic Freedom Alliance.

Since Hamline refused to back down, FIRE has escalated its response, reporting the school to the Higher Learning Commission, which accredits Hamline, for violating academic freedom. Click below to read the press release, and here to see the letter to the HLC: 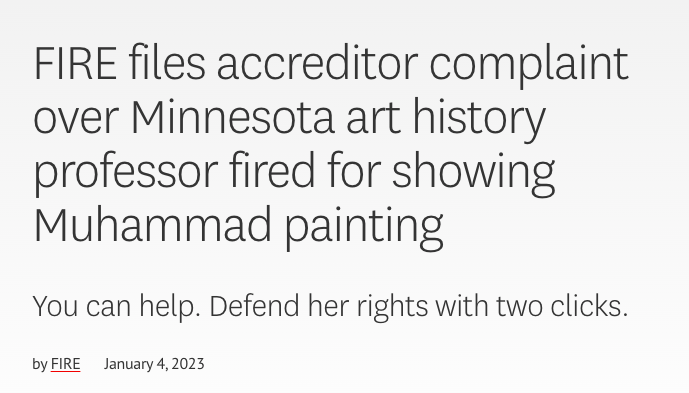 As the letter reports, Hamline has a contractual agreement to protect the academic freedom of its faculty:

Hamline University has made a contractual commitment to its faculty to respect and protect their academic freedom. The Hamline University Faculty Handbook as approved by the Board of Trustees in 2021 is clear. Hamline adopted without reservation the 1940 statement on academic freedom endorsed by the American Association of University Professors and the American Association of Colleges. Section 3.1.2 of the Handbook guarantees that “all faculty members are entitled to freedom in the classroom in discussing their subject, but they should be careful not to introduce into their teaching controversial matter which has no relation to their subject.” The guarantee extends to every individual at Hamline who is working in an instructional capacity regardless of whether they enjoy the protections of tenure. There is simply no question that introducing students to an important piece of Islamic art in a global art history class is covered by this principle of academic freedom. Hamline’s own stated commitment to academic freedom is unqualified. There is no exception for students who feel offended or disrespected by materials they encounter in the course of their college education.

This is one step short of a lawsuit, but could have even more severe consequences if the school loses its accreditation. I wrote to FIRE asking them if reporting a violation to an accreditation group was new for them, and Sabrina Conza, FIRE’s program officer for Campus Rights advocacy, responded:

Thanks for your questions. FIRE has alerted institutions’ accreditors of their violations of accreditation standards before, including Emerson College and Saint Vincent College. Both colleges’ accreditors chose to investigate our claims. As of now, FIRE’s focusing on our accreditor complaint as well as our faculty letter and take action campaign.

If you want to send a quick note to Hamline’s President, the screenshot above has, at the bottom of its article, a boilerplate letter that you can sign (or modify), and click to send it automatically. I’ve done so and would urge others who feel likewise to fill in your name and click the link.

There’s another public objection to Hamline’s egregious behavior: a passionate critique in the Chronicle of Higher Education of the University’s behavior—by a Muslim.  Amna Khalid, the author, is an associate professor of history at Carleton College and host of the podcast Banished.

A couple of excerpts from Dr. Khalid’s letter:

As a professor, I am appalled by the senior administration’s decision to dismiss the instructor and pander to the students who claim to have been “harmed.” This kind of “inclusive excellence” permits DEI administrators to ride roughshod over faculty knowledge. The administration’s blatant disregard for and active suppression of the very thing an institution of higher learning is valued for — the specialized knowledge of its faculty — makes this “one of the most egregious violations of academic freedom in recent memory,” in the words of PEN America.

With leadership like Hamline’s, who needs content-banning legislation to limit the scope of inquiry and teaching? It is the ultimate betrayal of the promise of education when institutions of higher learning begin endorsing ignorance. In the end, it is the students who pay the highest price for such limits on academic freedom.

. . . But most of all, I am offended as a Muslim. In choosing to label this image of Muhammad as Islamophobic, in endorsing the view that figurative representations of the Prophet are prohibited in Islam, Hamline has privileged a most extreme and conservative Muslim point of view. The administrators have flattened the rich history and diversity of Islamic thought. Their insistence that figurative representations of Muhammad are “forbidden for Muslims to look upon” runs counter to historical and contemporary evidence.

And the two sentences below have to sting most of all. At the very least, it shows the hypocrisy of Hamline and other Universities whose DEI committees act as promoters of censorship, not diversity:

To add insult to injury: The push to silence and exclude alternative Muslim views at Hamline is driven by the office of inclusive excellence. So much for the role of the DEI apparatus in advancing real diversity on campus.

Somehow I think Hamline is going to lose this one. . .