First of all, note that the Washington Post headline below is misleading. Although the author, Justin Dyer, gives lip service to the separation of church and state limned in the Constitution, 94% of his whole article is devoted to the claim that America was founded on explicitly Christian principles (note, not Jewish or Judeo-Christian ones). He does this by some historical fast-stepping and judicious quotation of early Americans who mentioned God.

Second, note that the question involves the present tense: IS America a Christian nation? This presumes that the country itself is just as Christian now as it was when it was founded, though that’s clearly not the case. Nearly everyone in America in the 18th century professed to be a Christian, and that’s no longer true. America is far more secular than it was back then. Further, even if you argue that the democratic nations of Europe were also founded on Christianity—something that the author would have to do to maintain his claims—many of those countries are, at present, pretty much atheistic.

The important question, then, is this: was America (and other Western democracies) founded on Christian principles? I aver that Justin Dryer is wrong.  The author, by the way, is identified this way:

Justin Dyer is executive director of the Civitas Institute at the University of Texas at Austin. This essay was adapted from his 2022 book, “The Classical and Christian Origins of American Politics.”

The founders said no to the model of confessional monarchies then prevalent in Europe. Instead, they created a republic with a constitution that explicitly ruled out religious tests for public office, and they separated the offices of the church from the offices of the state. Surrounded by robust religious pluralism, the founders chose not to establish a national church.

That doesn’t mean we have a secular founding, however. America at its founding was far from secular, if we take that to mean a society in which the foundations of the political order are disconnected from an underlying religious tradition. Our Declaration of Independence begins with an invocation of the “Laws of Nature and of Nature’s God,” bases human equality on creation, defines rights as the endowment of our Creator, appeals to the “Supreme Judge of the world,” and declares the signers’ “firm reliance on the protection of divine Providence.”

Dyer doesn’t mention, though, that the Constitution, which really is the founding document of America rather than simply a declaration of a new country, DOES NOT MENTION GOD OR THE DIVINE.  Dyer goes on by mentioning when some of the founders alluded to God, like Alexander Hamilton:

In contrast, Hamilton claimed: “Good and wise men in all ages” have taught that God had “created an eternal and immutable law, which is, indispensably, obligatory upon all mankind, prior to any human institution whatever.” The reason Hobbes believed such an “absurd and impious doctrine,” Hamilton concluded, is “that he disbelieved the existence of an intelligent superintending principle, who is the governor, and will be the final judge of the universe.”

Dyer argues that the Founders weren’t deists, but theistic Christians. I am not at all sure he’s right. Franklin was an atheist, Jefferson a deist who cut out all the words referring to miracles and the supernatural from his Bible (and also founded the University of Virginia insisting that it not have a divinity school), and I’m not aware that Madison or Washington were particularly religious. (John Adams, on the other hand, was.)

So what buttresses Dyer’s argument? Only his claim that the principles of American democracy come straight from Christianity. Except that they don’t: they are part of the humanistic philosophy that began with the ancient Greeks. Dyer even admits this below (my bold). First, this:

Such language points to a possible reconciliation of our familiar debates. The United States was founded by thinkers steeped in the Christian natural-law tradition, a rich and powerful stream of thought that is distinct from any institutional church. That tradition, developed during the long Christian engagement with classical philosophy, holds that reason can identify what is best for human beings by studying human nature. The good for human beings includes such things as life, health, knowledge and friendship. When we have good things in our lives, we flourish and are happy. When we fail to cultivate those goods, either individually or as a society, we sow the seeds of our own misery and ruin.

From that, it makes sense to say we have natural rights to life, liberty and the pursuit of happiness, and the purpose of government is to secure those rights, as the Declaration proclaims.

. . . Ancient pagan philosophers believed some of this, but Christians emphasized the divine source of the natural law and of human equality. The natural law, they claimed, implies a lawgiver who is the creator of the world and the author of human nature. Human nature is stamped with the image of God, the imago dei — a notion that undermined the ancient practice of slavery in spite of conditions at the founding.

BUT, the important thing is that everything in bold above—all the supposedly Christian ideas that infused America’s founding—was advanced as secular philosophy by the Greeks and Romans.  Christians just took it over from the ancients. So why doesn’t Dyer say that America was founded on secular Greek and Roman philosophy? Because he wants to emphasize Christianity:

Further, to say that the image of God undermines slavery is just ludicrous: Christianity was used to support slavery in the American South for several hundred years. The Bible says nothing against slavery and, in fact, gives advice about how severely to whip your slaves. “God’s will”, in Dyer’s case, is simply his own beliefs imputed to God. Here the author is reifying purely secular and humanistic ideas as Christian ones.

I don’t want to argue about the following claim of Dyer, because I think he’s wrong, and one could argue, based on the evidence, exactly the opposite:

Some of the founders expressed skepticism about the claims of Christianity, of course. With very few exceptions, however, they were not deists who thought God set the world in motion and left it to run on its own. . .

Unfortunately for Dyer, those “very few exceptions” included men like Jefferson, Franklin, Washington, and probably Madison. Those happened to be THE FOUNDERS. In the end, I reject Dyer’s claim that America was or is a Christian nation except in the trivial sense that most Americans in the late 18th century were Christians. The ideas that underlay America’s founding are simple humanistic ones that long pre-dated the rise of Christianity. Just because you can pick and choose them from the Bible (as well as other stuff like slavery) means nothing, for you can find support for any view you want in the Bible.

And I just now remembered this book by FFRF attorney Andrew Seidel, who argues at length that America was not founded as a Christian nation. Click screenshot to go to the Amazon site. It’s well worth reading. 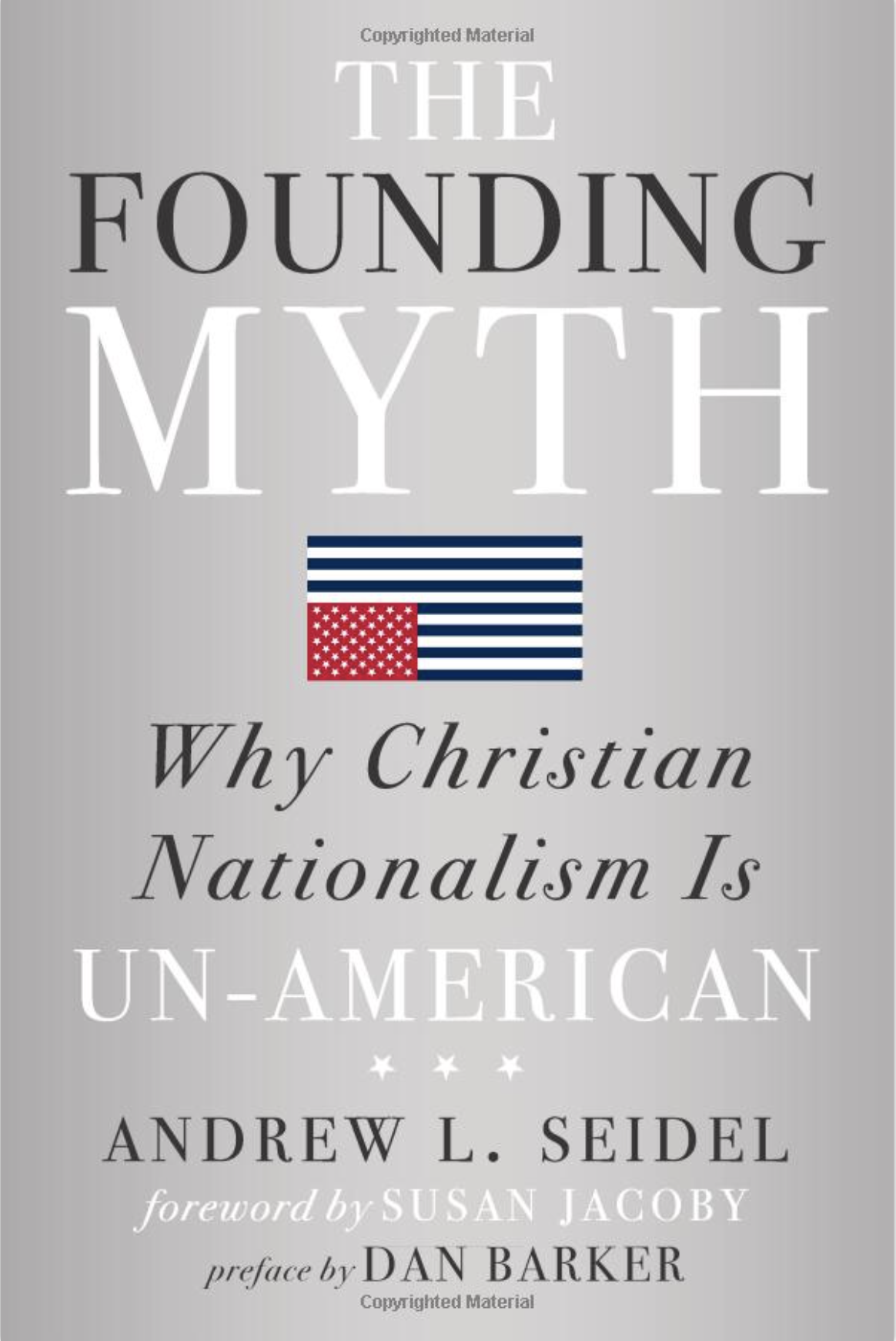