Today we have the second part of reader Taryn Overton’s hiking trip to Scotland (part 1 is here).  Taryn’s captions are indented, and you can click on the photos to enlarge them.  Here’s part of the description we had for part 1.

This year I spent the month of September in Scotland on a walking holiday.  We explored the Kintyre Peninsula via the Kintyre Way trail, went North to the Isles of Gigha and Skye, and ended in the Northern Highlands.  We were prepared for rain given the notorious Scotland weather, but apart from one 18 mile day in a downpour, hop skipped and jumped alongside the sun.  The superlatives ran out early on – it was a restorative trip, made all the more wonderful by the generous and witty Scottish hikers and B&B hosts that we interacted with.

Isle of Gigha.  There were beautiful rock formations at the South end of the island.  They nestled in brilliant short green grass and sea water: 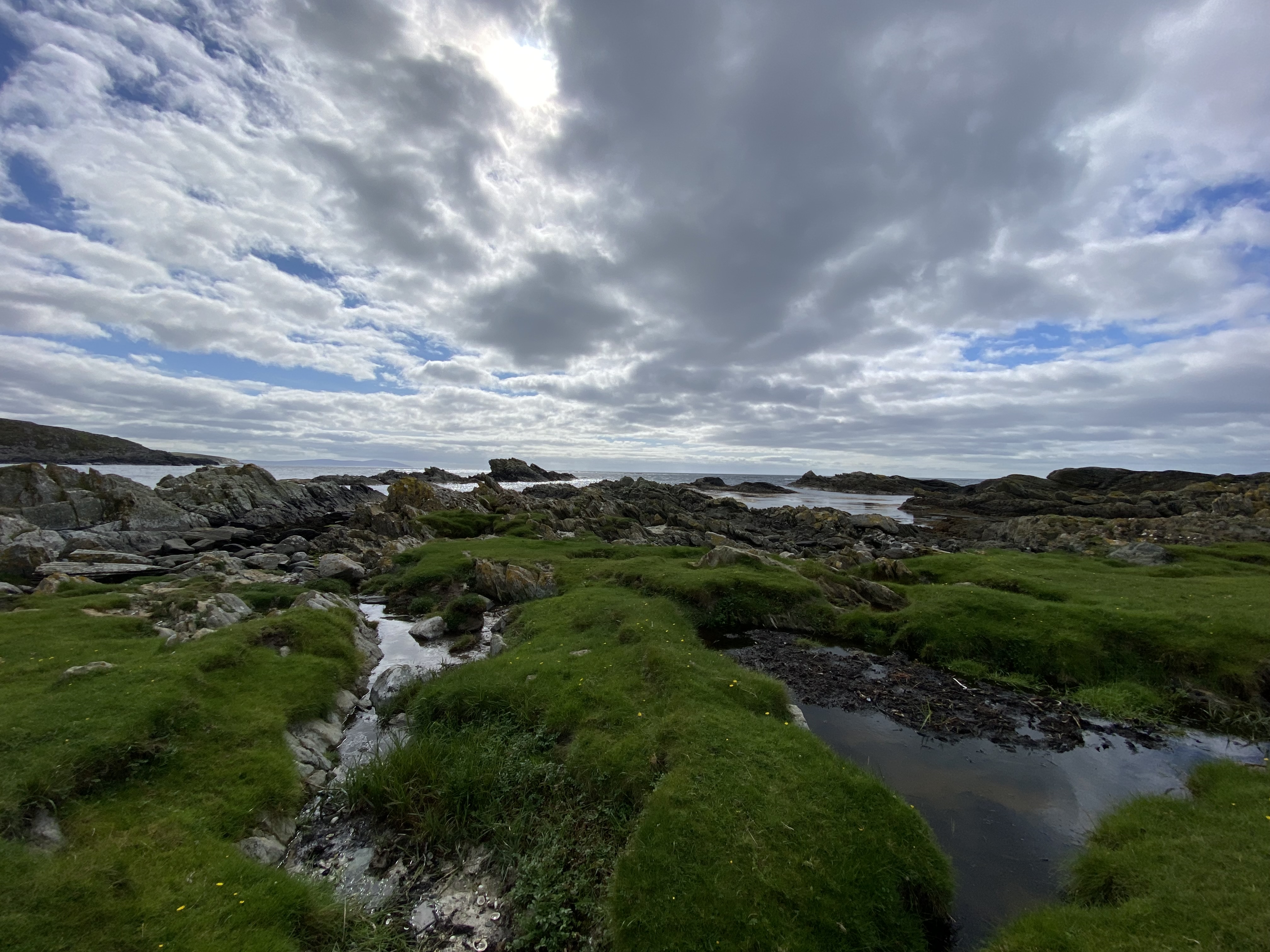 Isle of Skye.  Our first hike was the Quiraing, a hike along the side of the Trotternish landslip.  The scenery was other-worldly, and the perspectives spellbinding – a tapestry of green/rocky/staggeringly beautiful mountainous formations, lochs, and valleys.  The Quiraing remains geologically active and shifts a few centimeters every year: 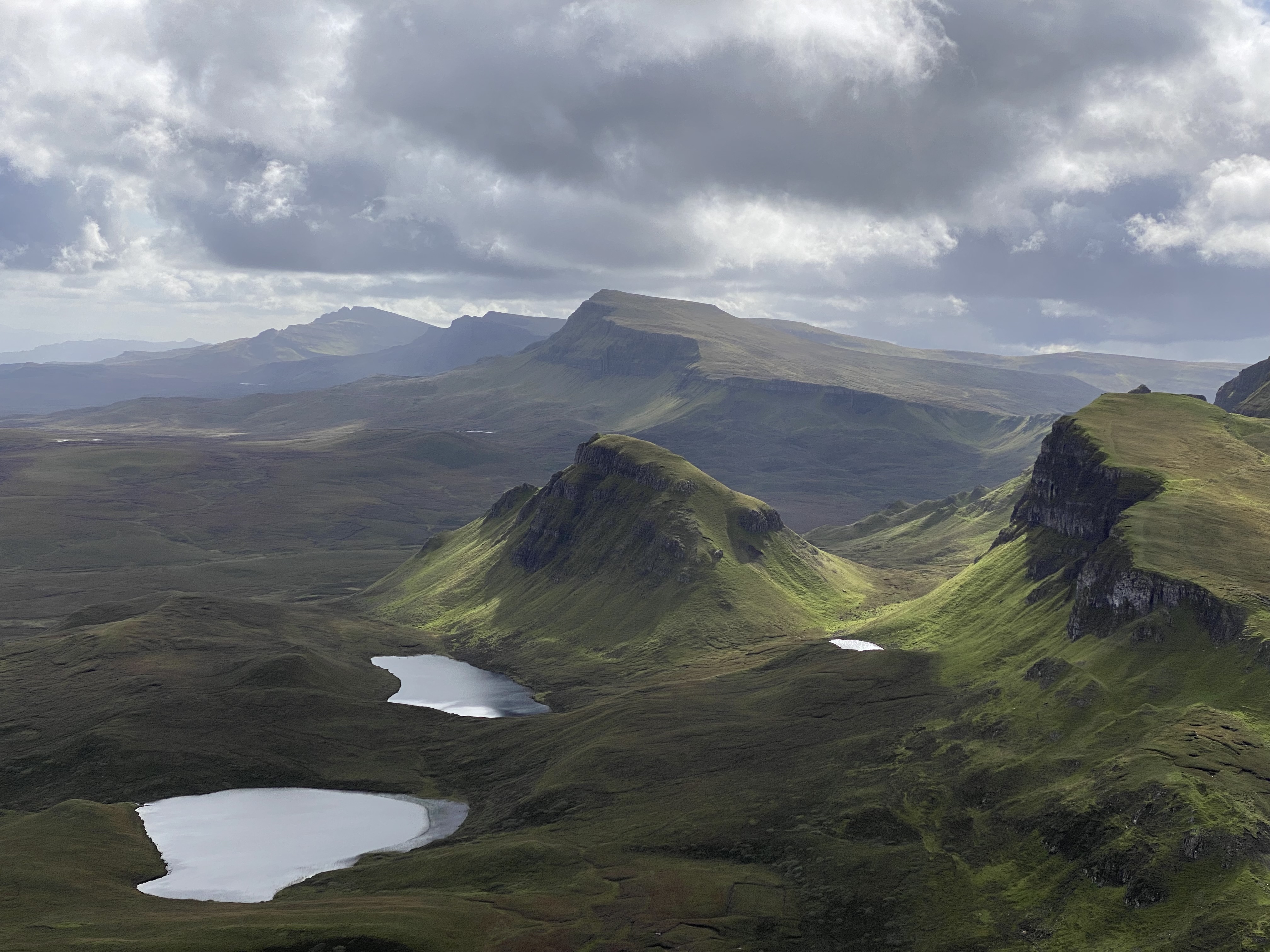 Isle of Skye.  Fairy Glen – an area also the result of a landslip.  Whimsical and surreal.  The stone circle labyrinth is a bit of human artistry: 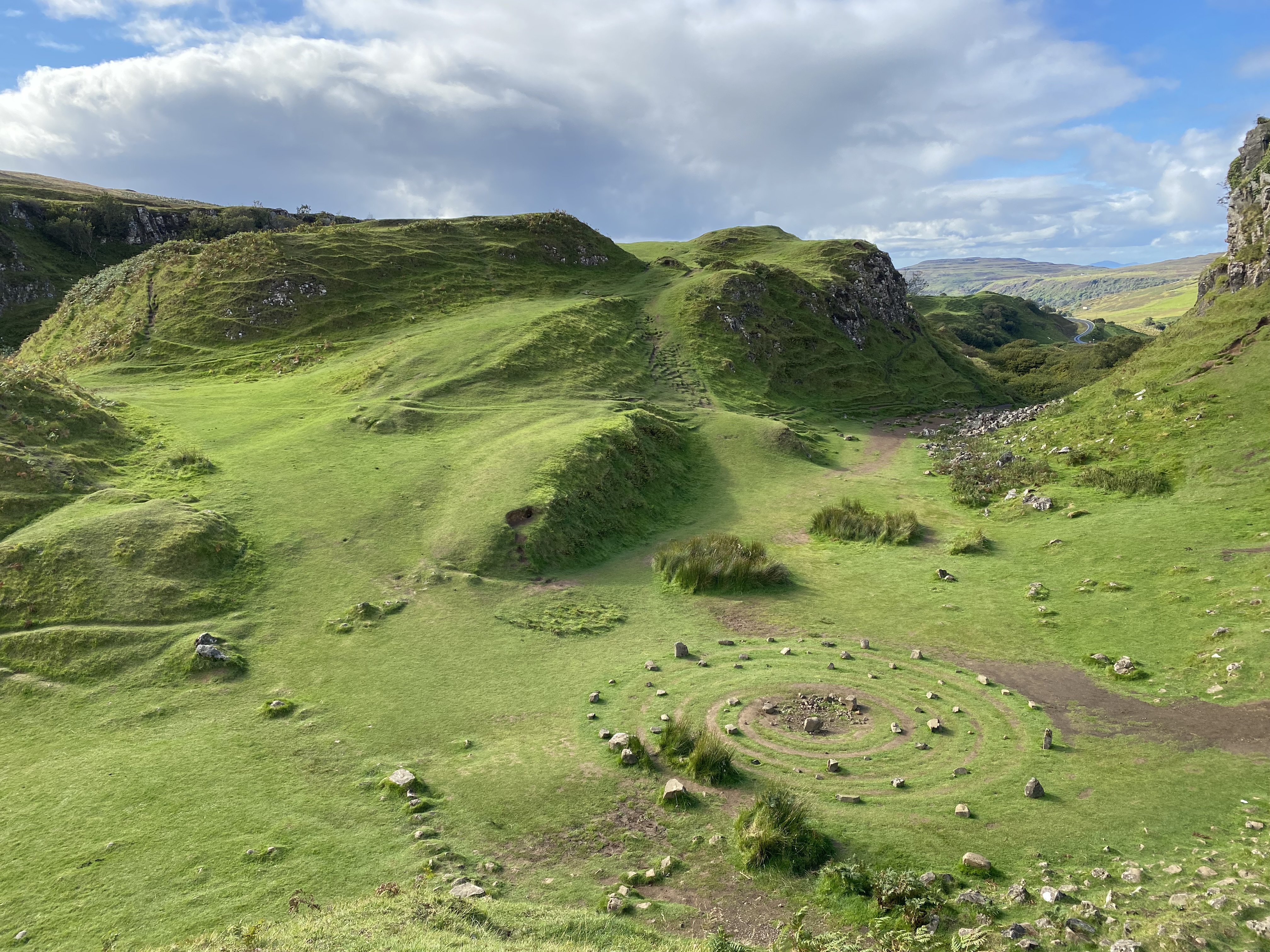 Isle of Skye.  ‘The Spur’ mountain, with its triangular imposing face and jagged crevice.  Part of the Black Cuillin mountains: 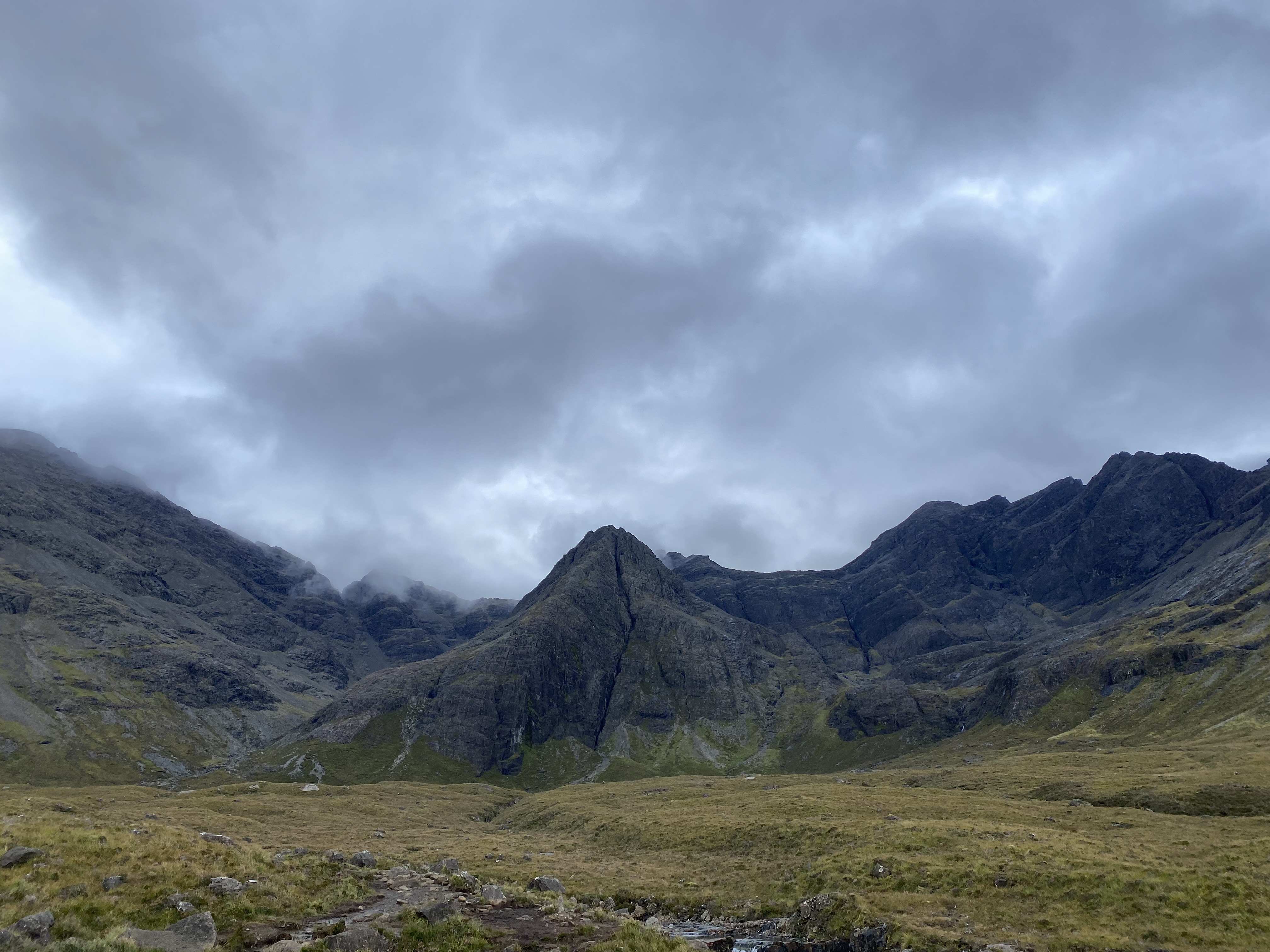 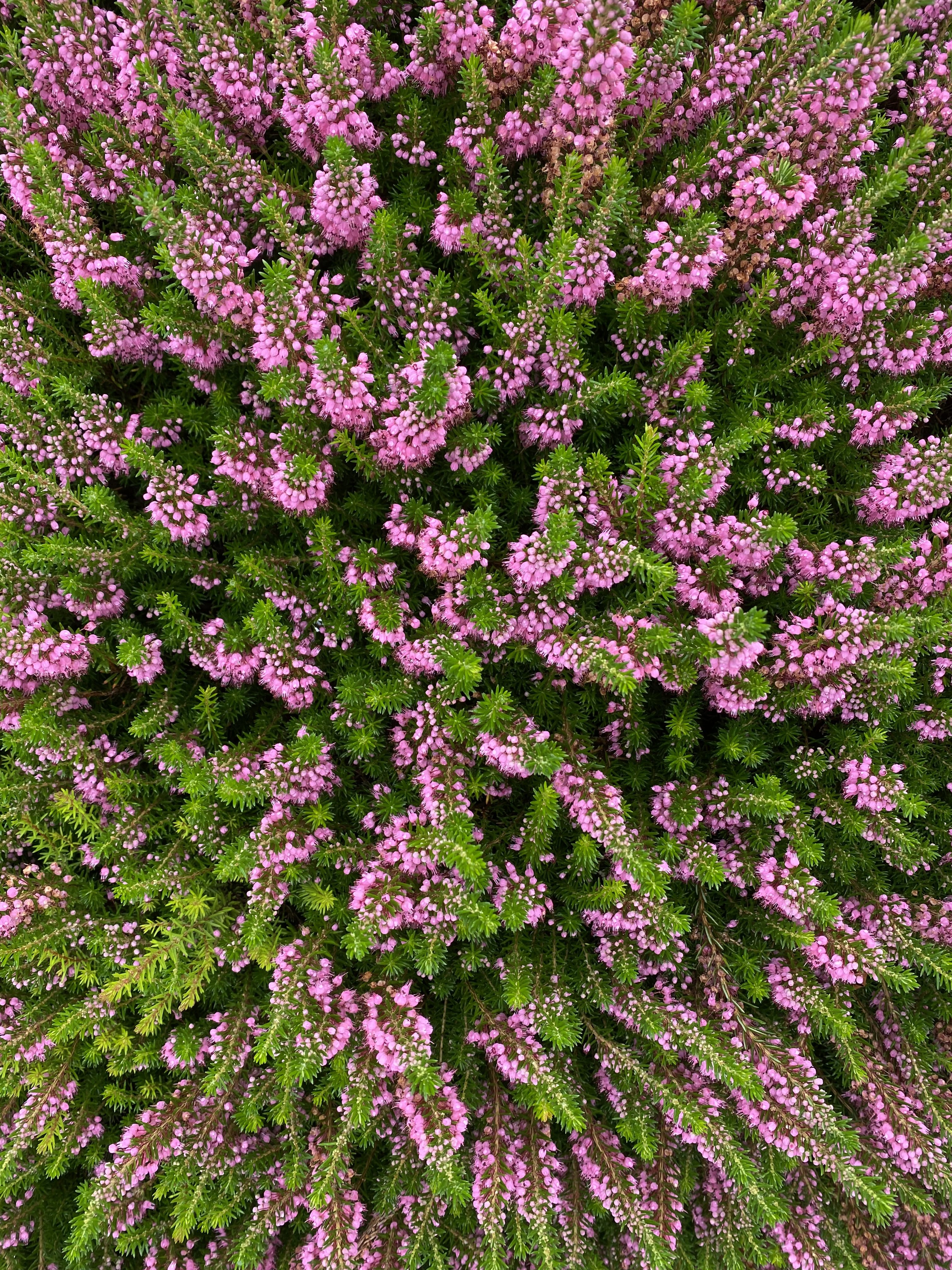 Isle of Skye.  On the way to the Old Man of Storr, which is one of the most popular hikes on the isle.  When we arrived it was heavily misting – the rock formations were shrouded – but the higher we climbed, the clearer it became until a welcome blue emerged: 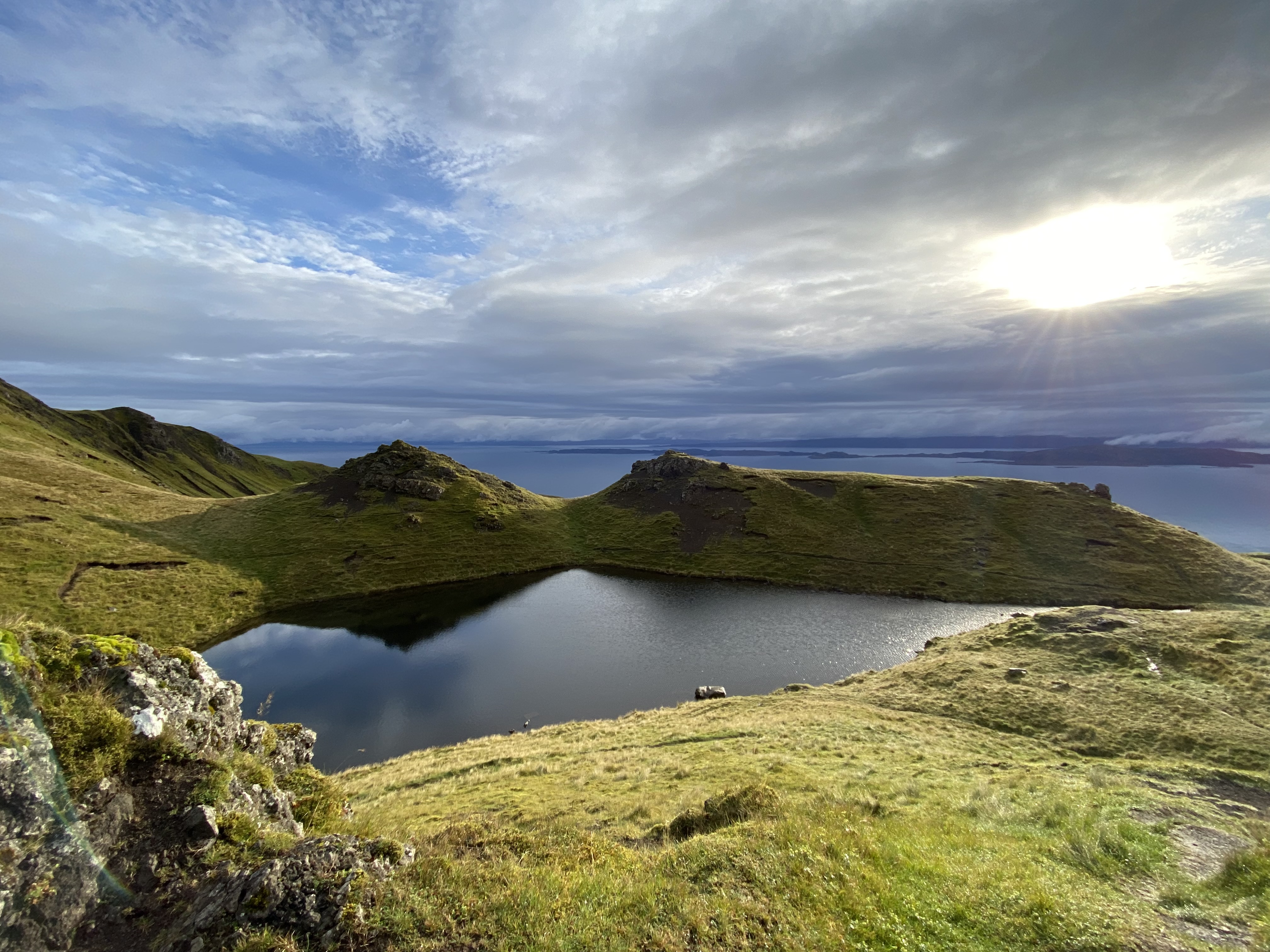 Isle of Skye.  The Old Man of Storr rock formations.  Tip to those visiting – arrive early to beat the crowds: 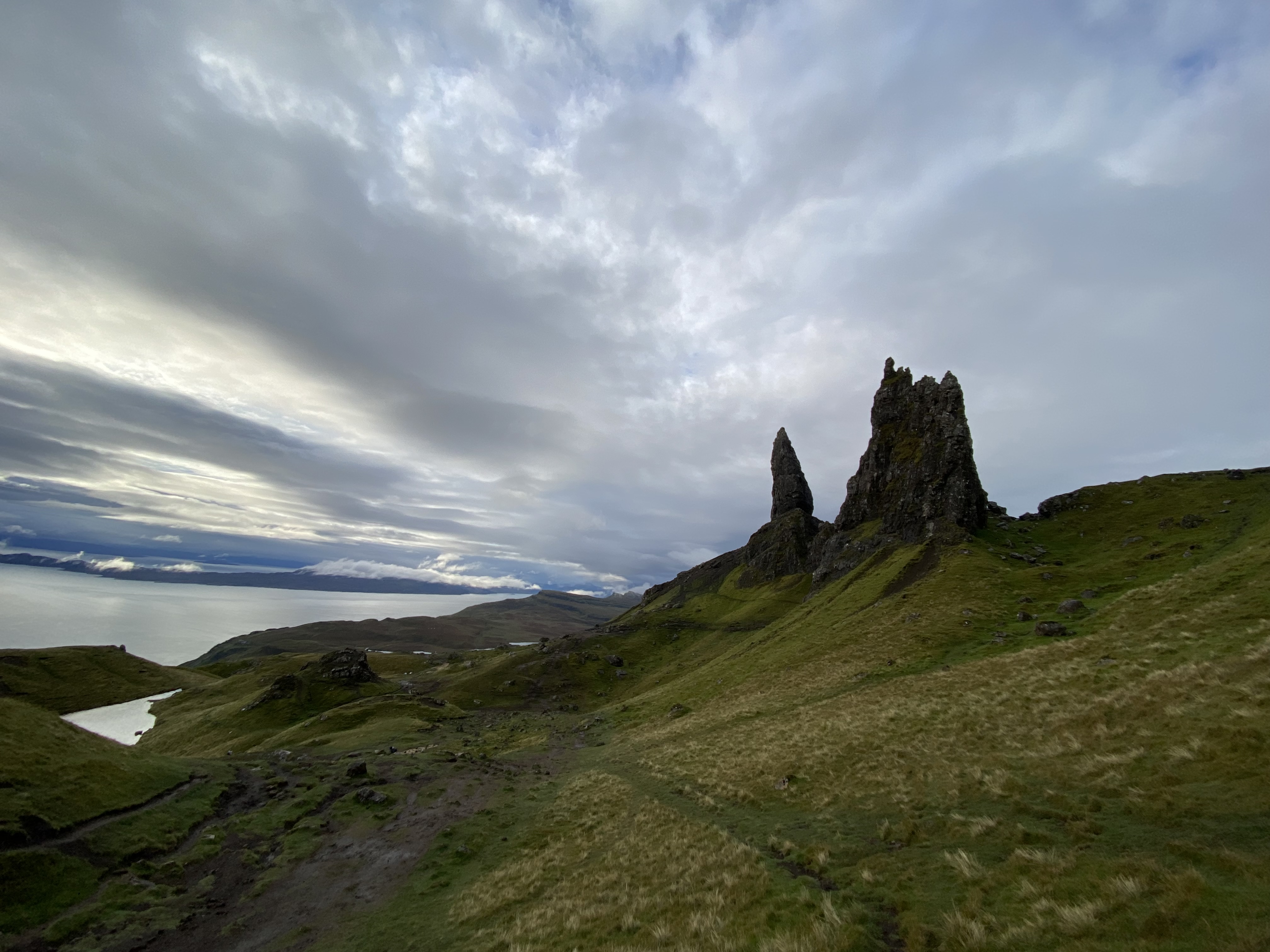 Isle of Skye.  View across Moonen Bay to Waterstein Head:

Isle of Skye.  Neist Point with lighthouse.  This is the most westerly point of the Isle and is known for its dramatic cliff scenery: 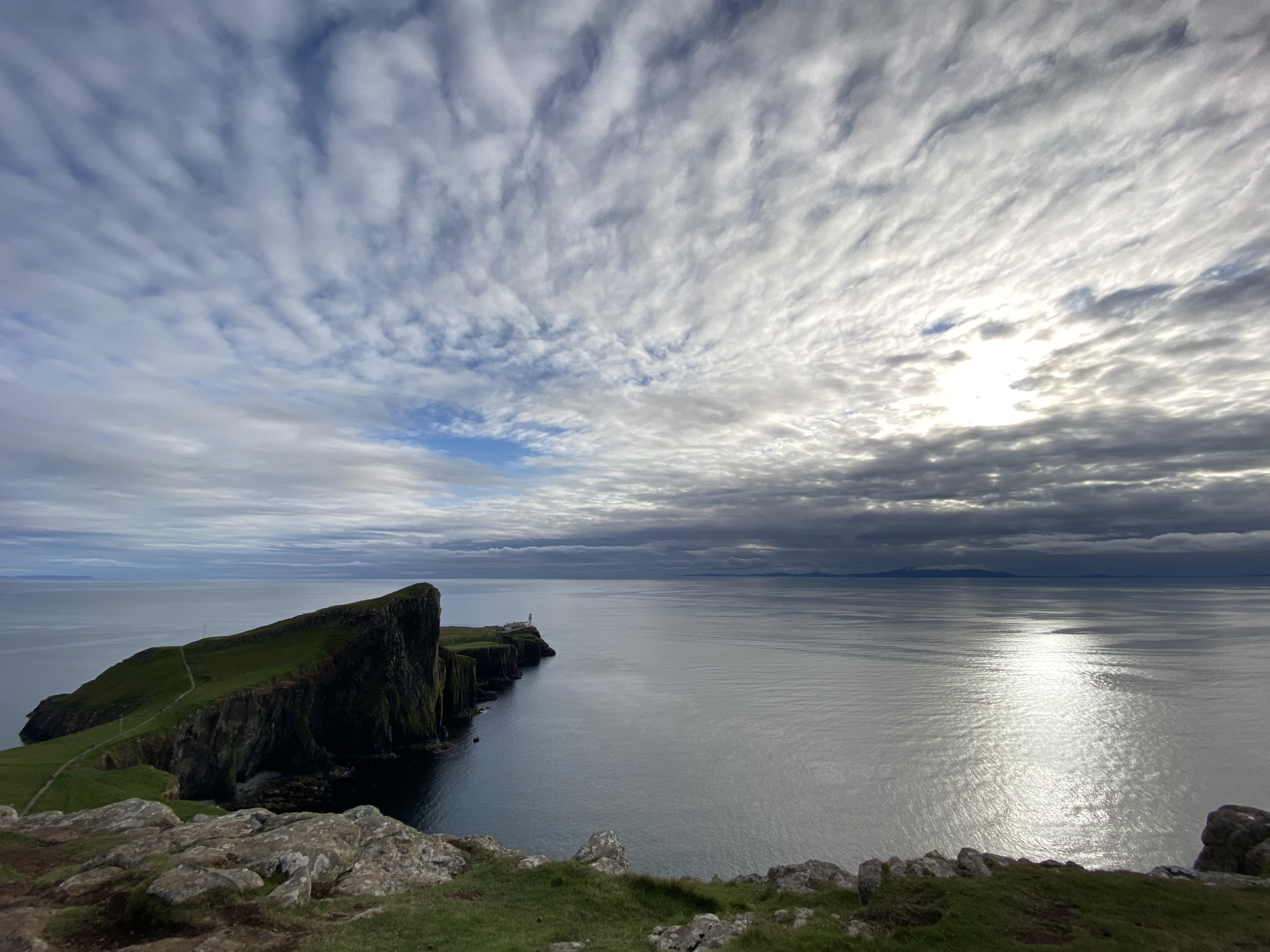 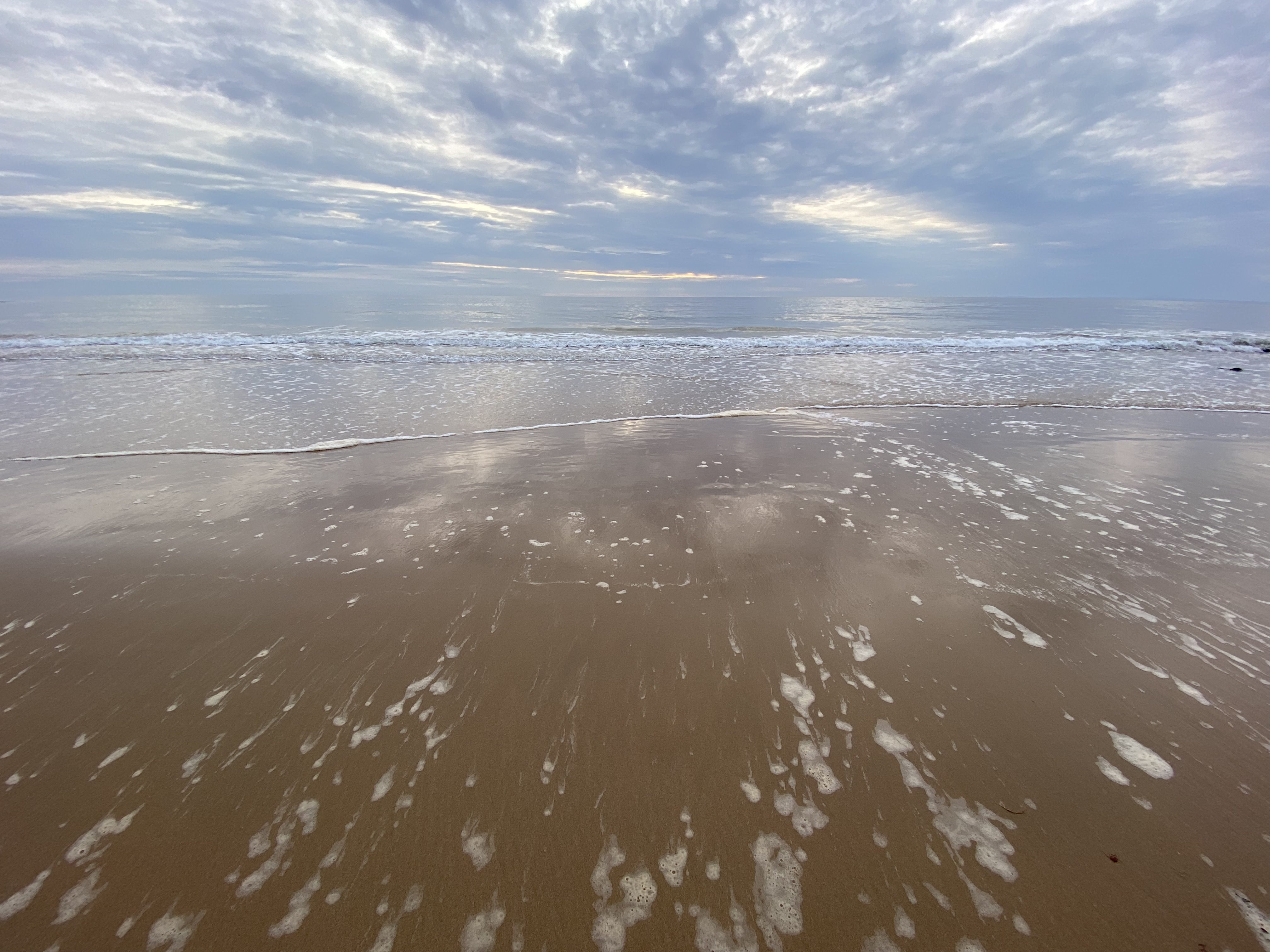 Sandwood Bay Beach.  If visiting Scotland and you’re anywhere near the Northern highlands, I implore you to visit this beach on a sunny day.  Everything about it was spectacular.  It’s a short and mostly flat 4 mile walk from the car park.  Nearing the beach, there are numerous paths that can be taken through a field of sand dunes.  Some terminated in rather steep descents, where with each step, the sand gently cascaded around our feet and helped to propel us downwards: 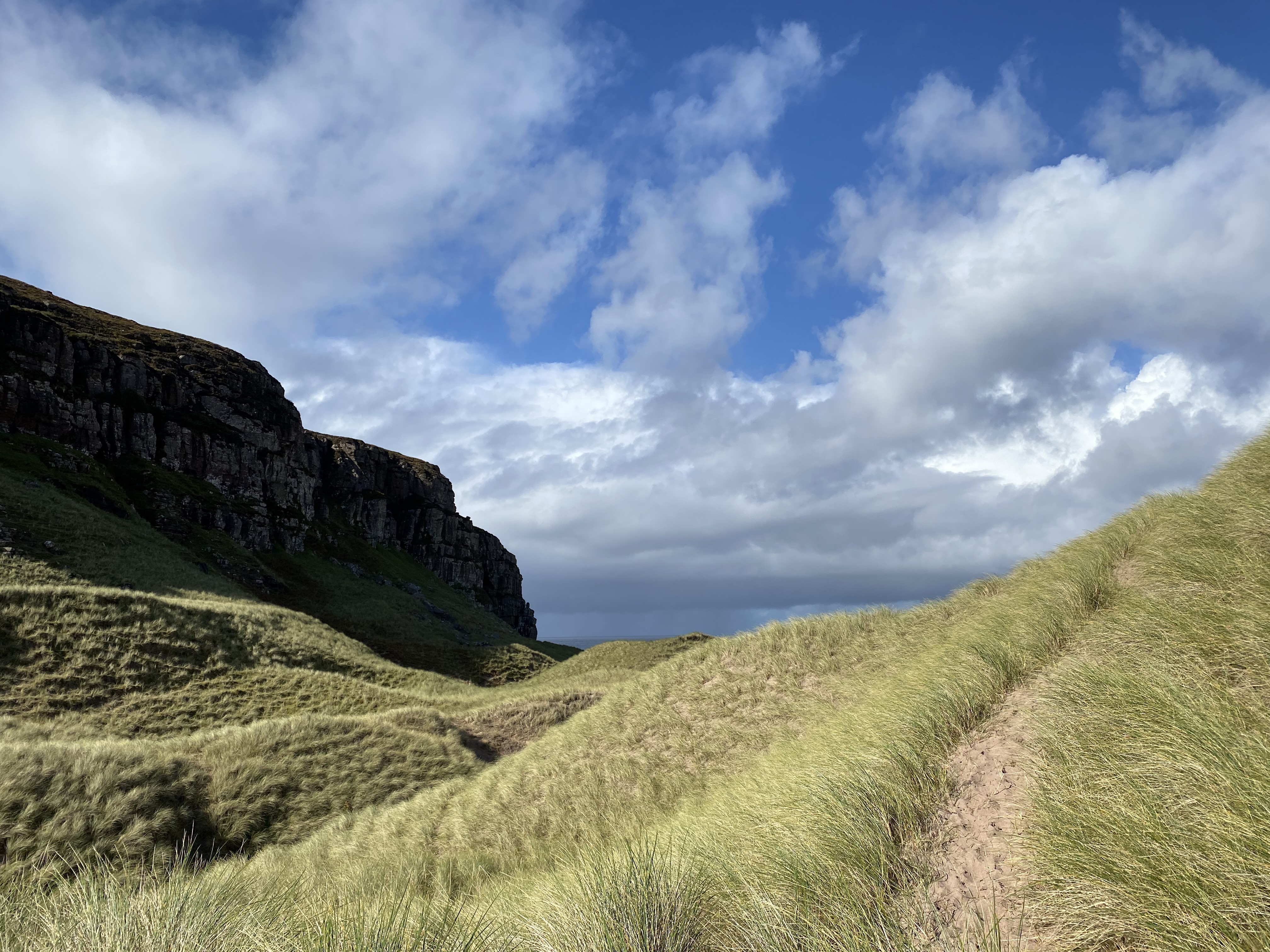 Sandwood Bay Beach.  Once through the dunes and onto the beach, the land mass of Scotland jutted out into the sea on the left, and a single dark tapering column of rock stood immediately adjacent to it – the staggering “Am Buachaille’, meaning “the herdsman” in Scottish Gaelic.  It’s a sea stack of Torridonian sandstone ~213 feet high and has been climbed by numerous adventurous humans.  To reach it, one must swim 100 feet at low tide: 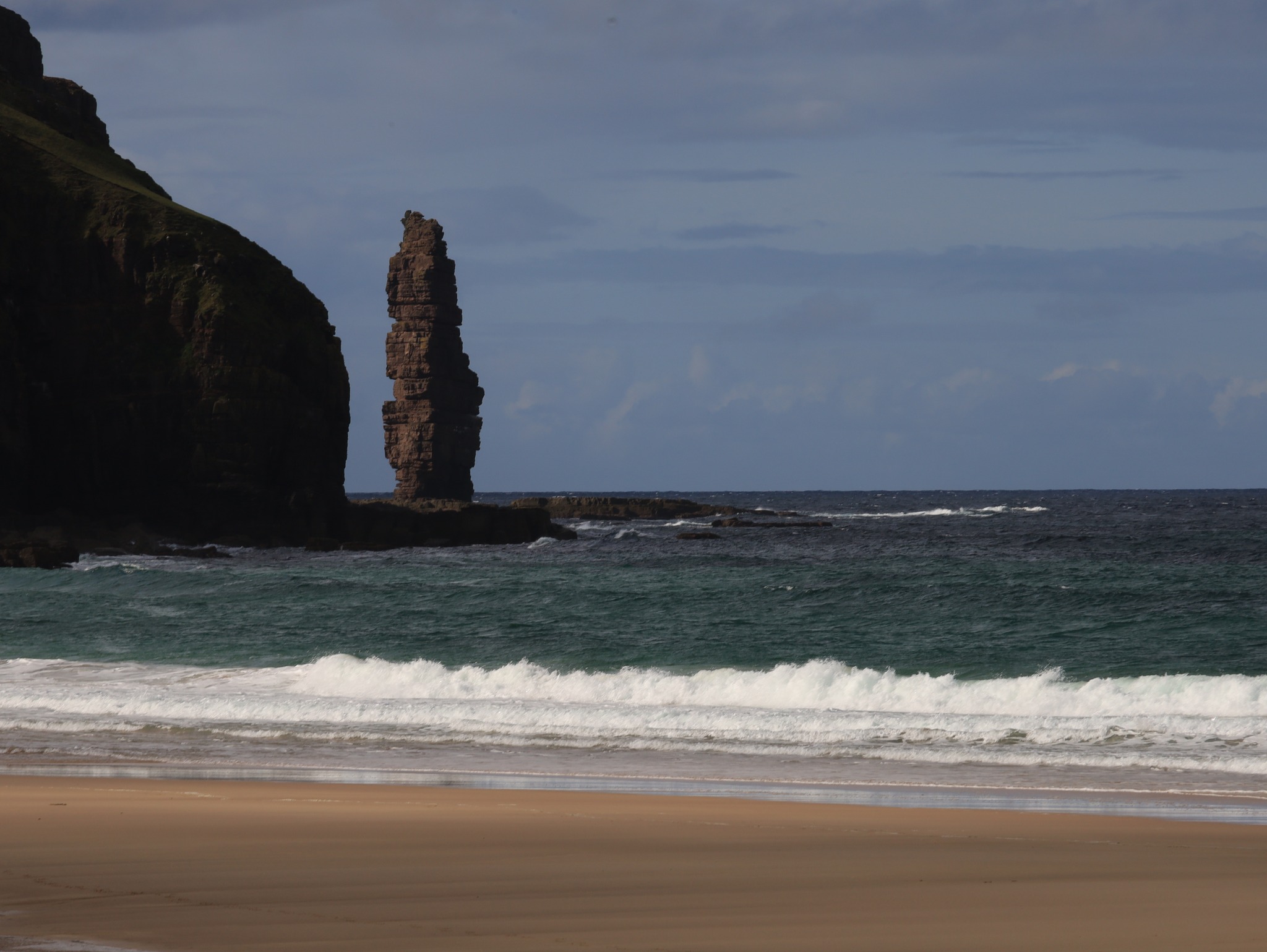 Sandwood Bay Beach.  In some areas the waves and wind left flame-like patterns in the sand: 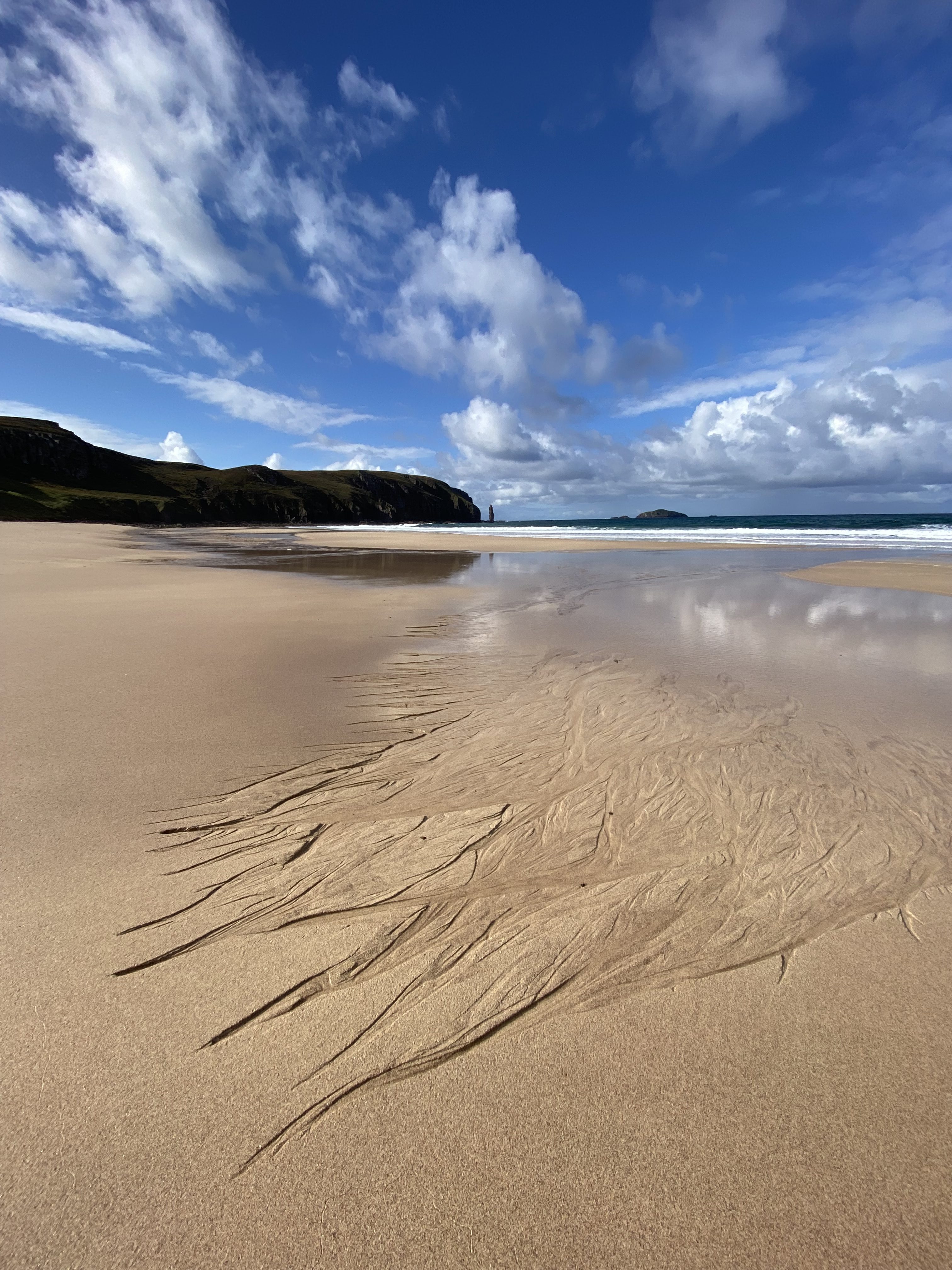 Sandwood Bay Beach.  The color palette of the ocean ranged from simply mirroring the cerulean sky, to turquoise and steel blue further out, to variations of sea green, pea green, and even emerald green closer to shore.  The “Atlantic Breaker” waves were fierce.  Majestic, mesmerizing, dramatic, secluded – this beach is in many ways unmatched.  Someday I hope to return to Scotland, if for nothing else than to experience this wonder once more: 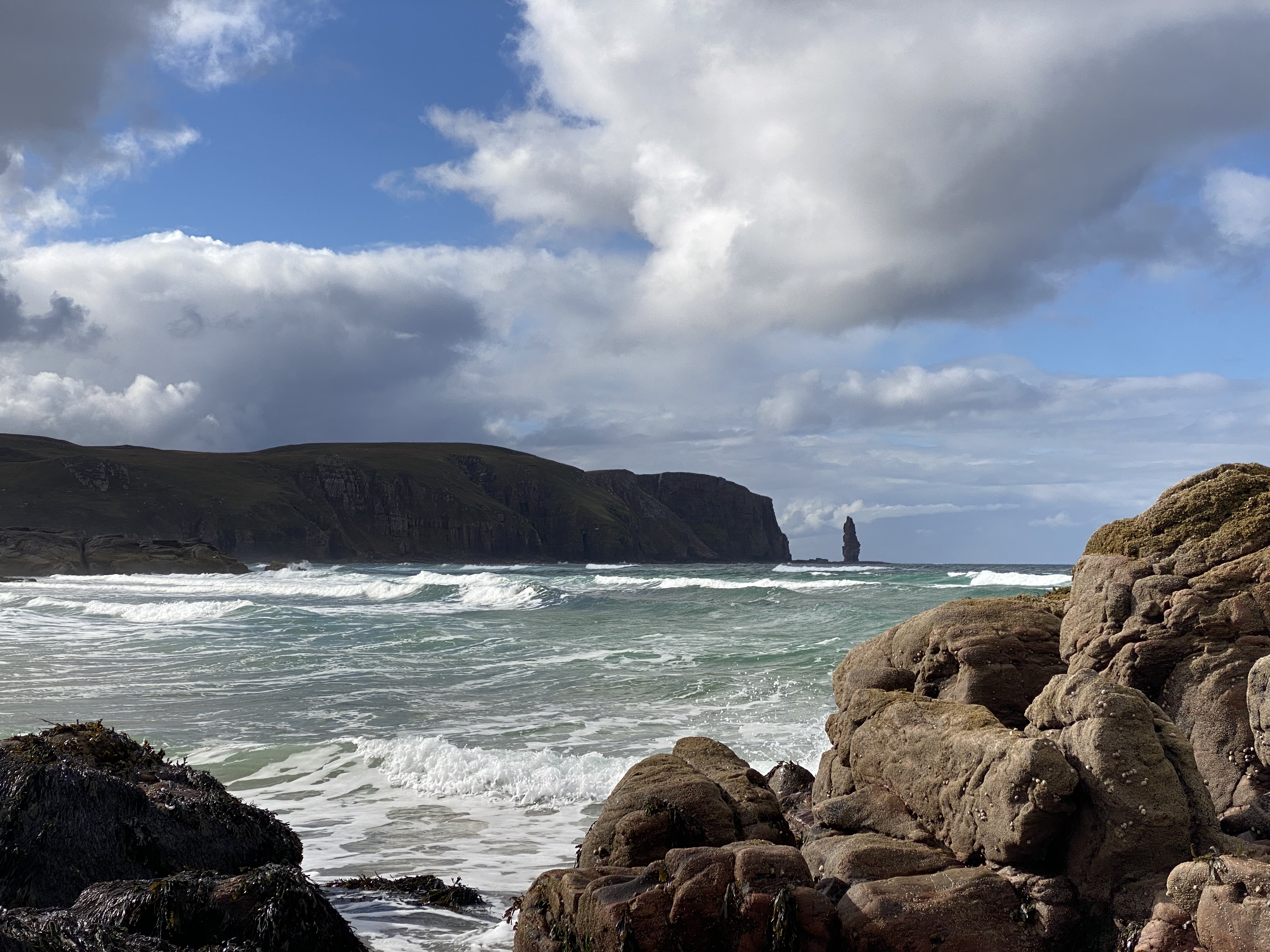