Thanks to readers who have sent in photos. But I NEED MOAR! (Remember, it’s my birthday tomorrow.)

Today we have a new contributor with swell photos of Scotland: Taryn Overton.  Taryn’s captions and narrative are indented, and you can enlarge the photos by clicking on them. This is the first half of the batch; the rest will be posted later.

This year I spent the month of September in Scotland on a walking holiday.  We explored the Kintyre Peninsula via the Kintyre Way trail, went North to the Isles of Gigha and Skye, and ended in the Northern Highlands.  We were prepared for rain given the notorious Scotland weather, but apart from one 18 mile day in a downpour, hop skipped and jumped alongside the sun.  The superlatives ran out early on – it was a restorative trip, made all the more wonderful by the generous and witty Scottish hikers and B&B hosts that we interacted with. These 14 photos are from the Kintyre Way.

Loch Fyne, viewed on the first leg of the Kintyre Way.  Mist surrounded much of the landscape, but an occasional azure slit made it through the clouds. 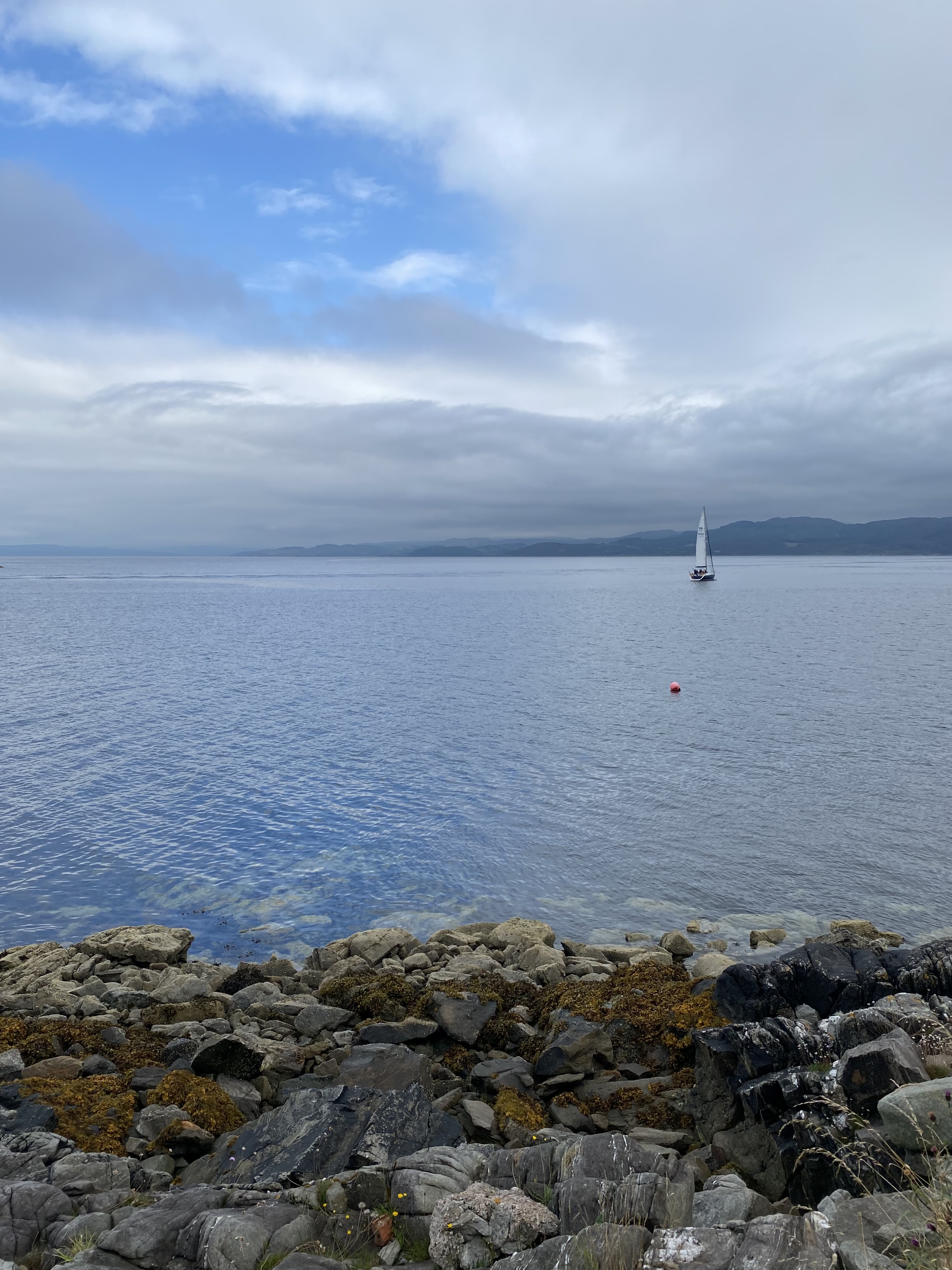 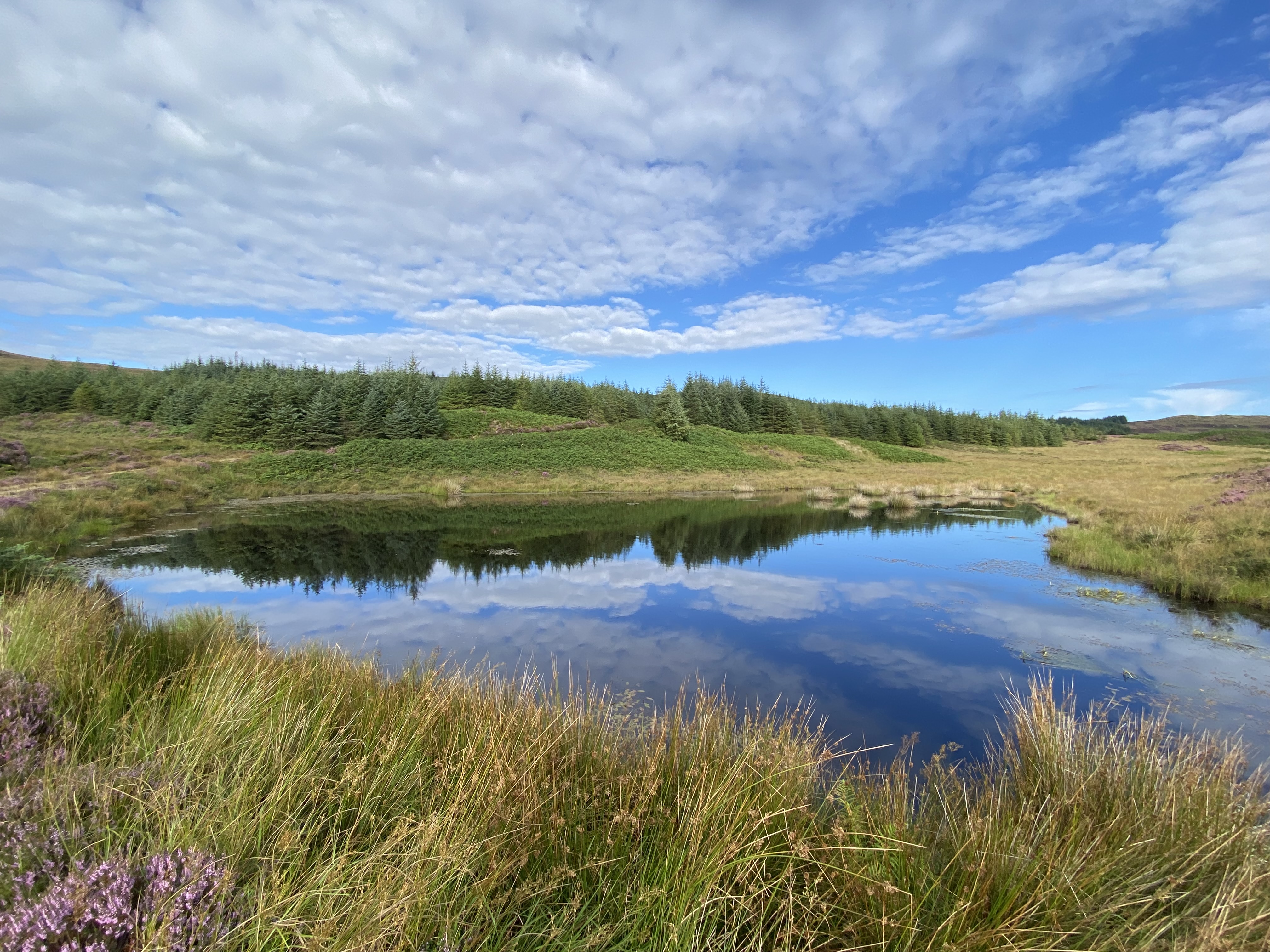 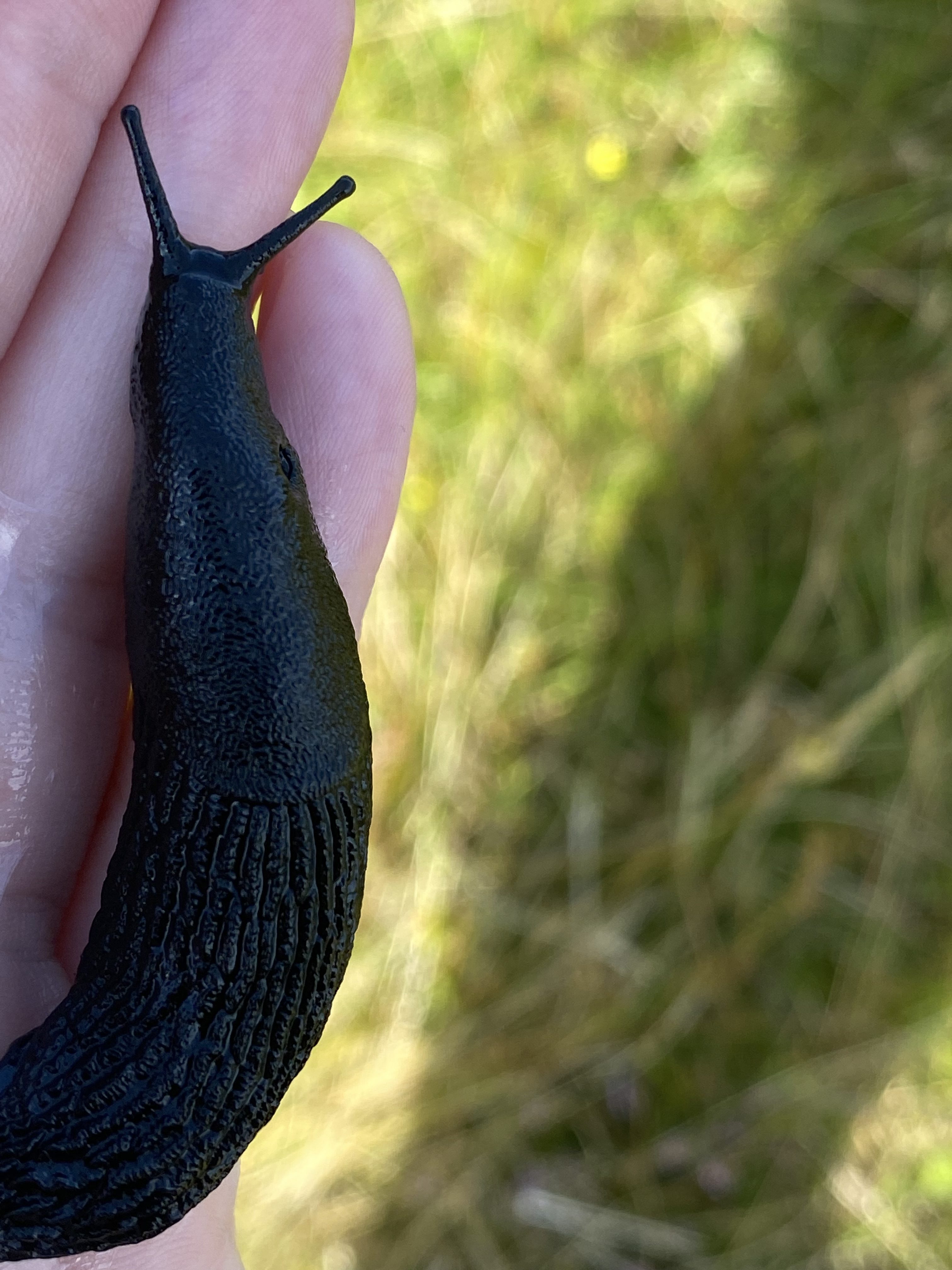 Kintyre Way: Clachan to Tayinloan.  The water was crystal clear and lapped pleasantly along the multicolored smooth blue/red/grey stones. 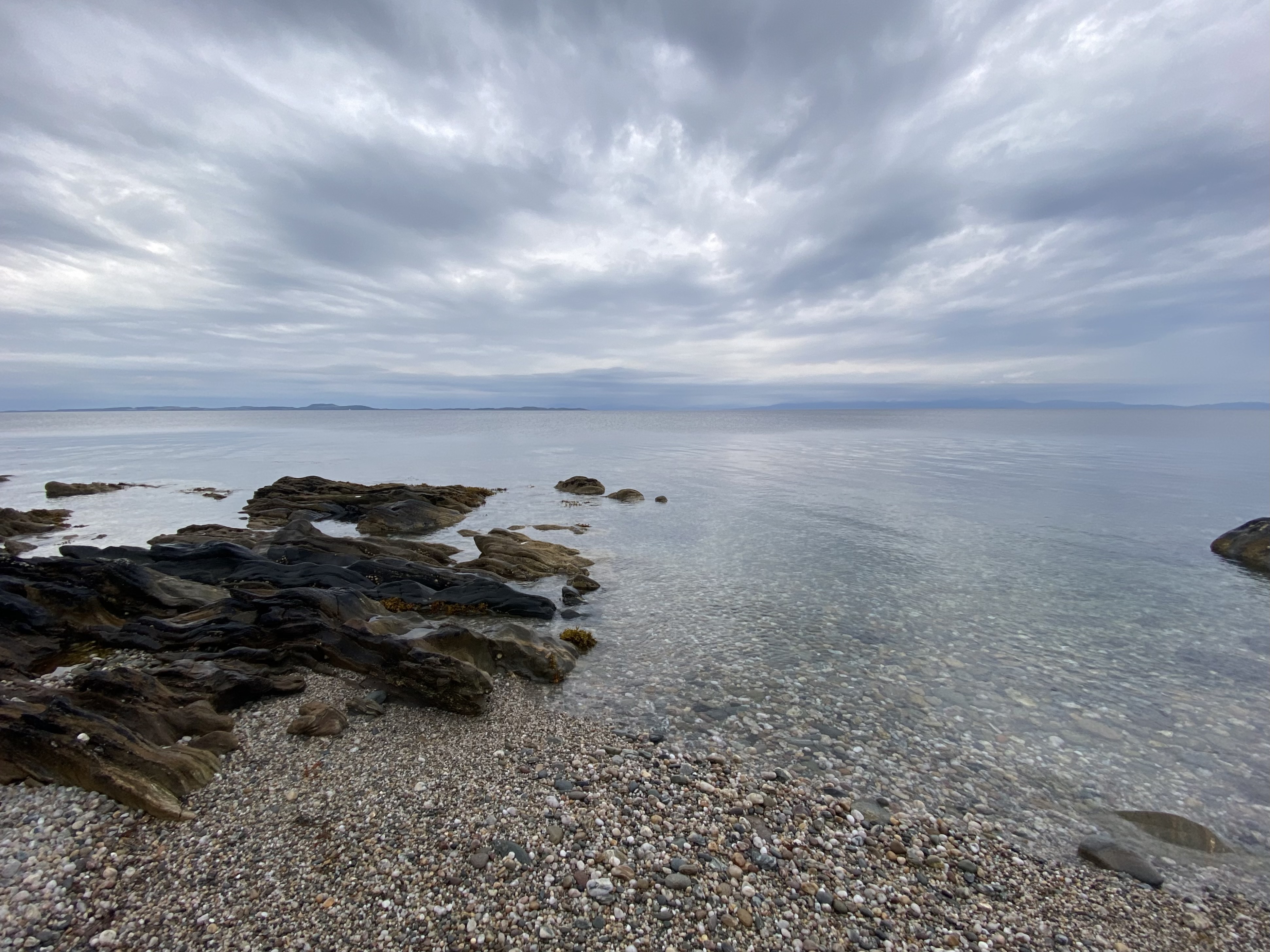 Sunset in Tayinloan.  Once the sun began to creep downward, we found a beach and appreciated a rare look at the sun setting over the Isles of Gigha, Islay, and Jura.  Colors eventually drifted to pastels, and we passed a small camp of driftwood with various hanging shells. 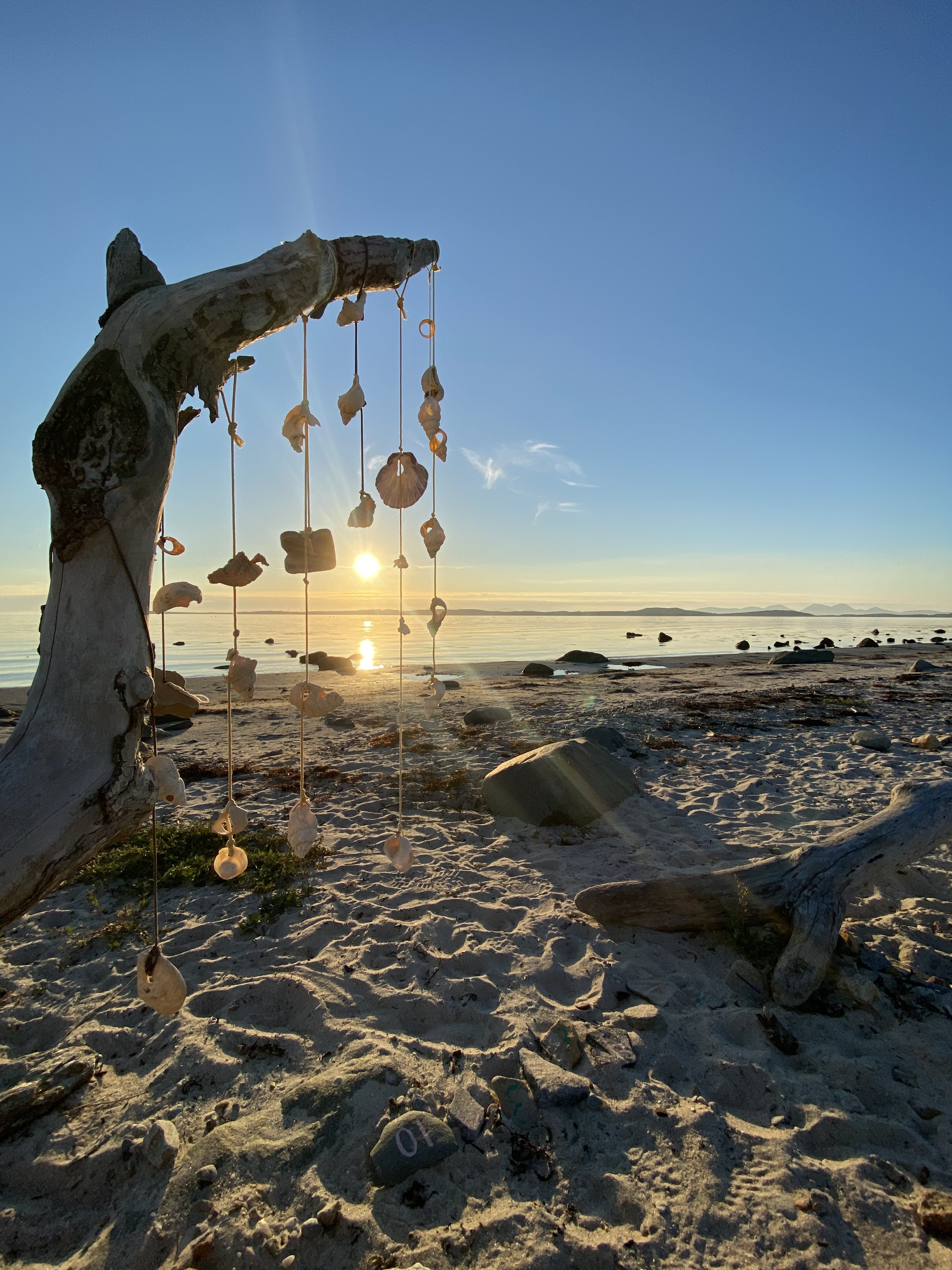 Kintyre Way: Tayinloan to Carradale.  The pinnacle of a steep climb through sodden mud was a walk through meadows of Scottish Heather to a view high above Kilbrannan Sound. 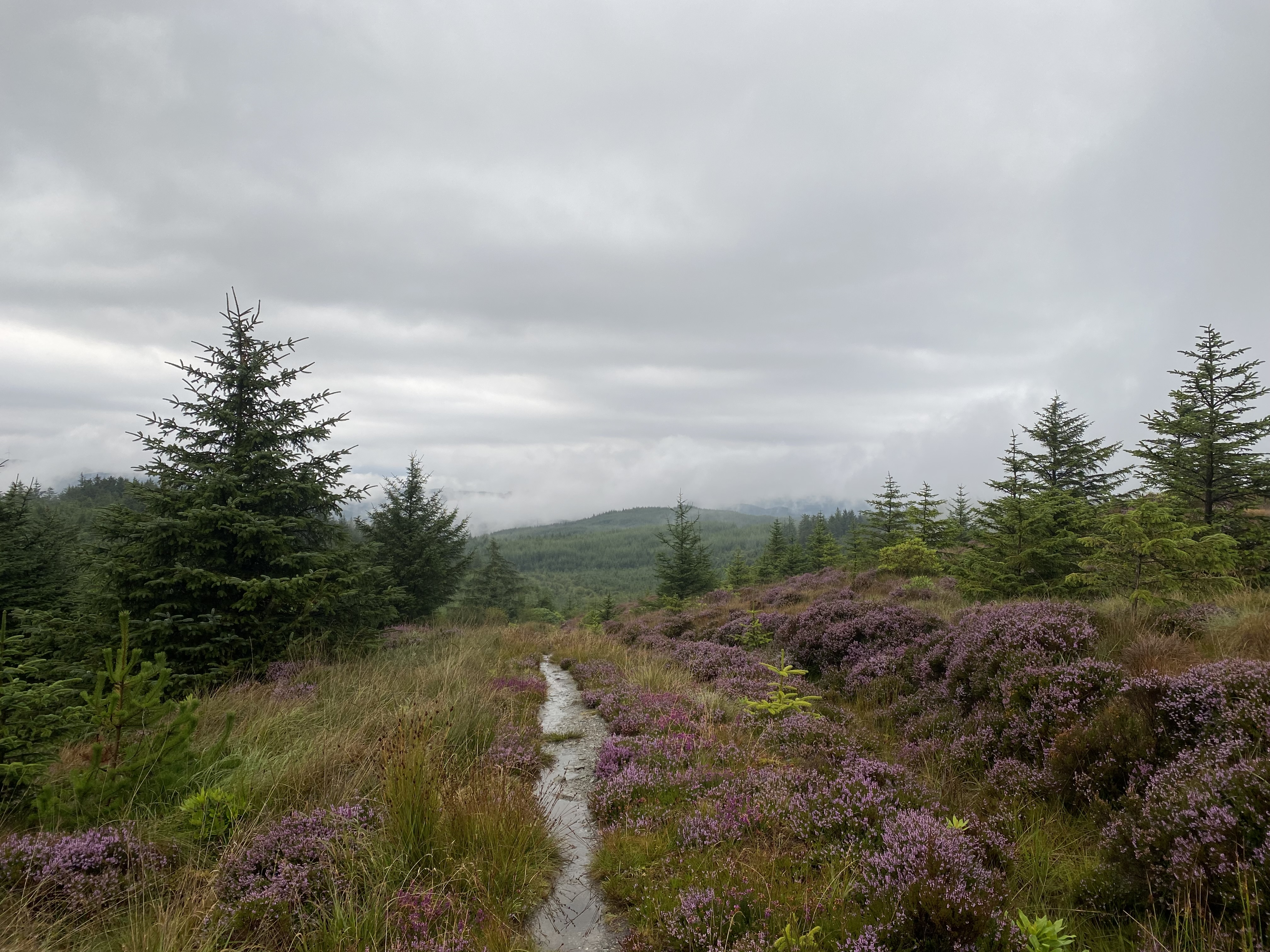 Saddell Bay – the location where Paul and Linda McCartney, along with the rest of Wings, filmed the ‘Mull of Kintyre’ music video (we of course played this on a small portable speaker we brought along for the occasion).  This is Anthony Gormley’s sculpture of an iron life-sized geometric man.  Saddell Castle is in the background.  It was built by David Hamilton, Bishop of Argyll in 1508-1512.

JAC: You can see the music video here. 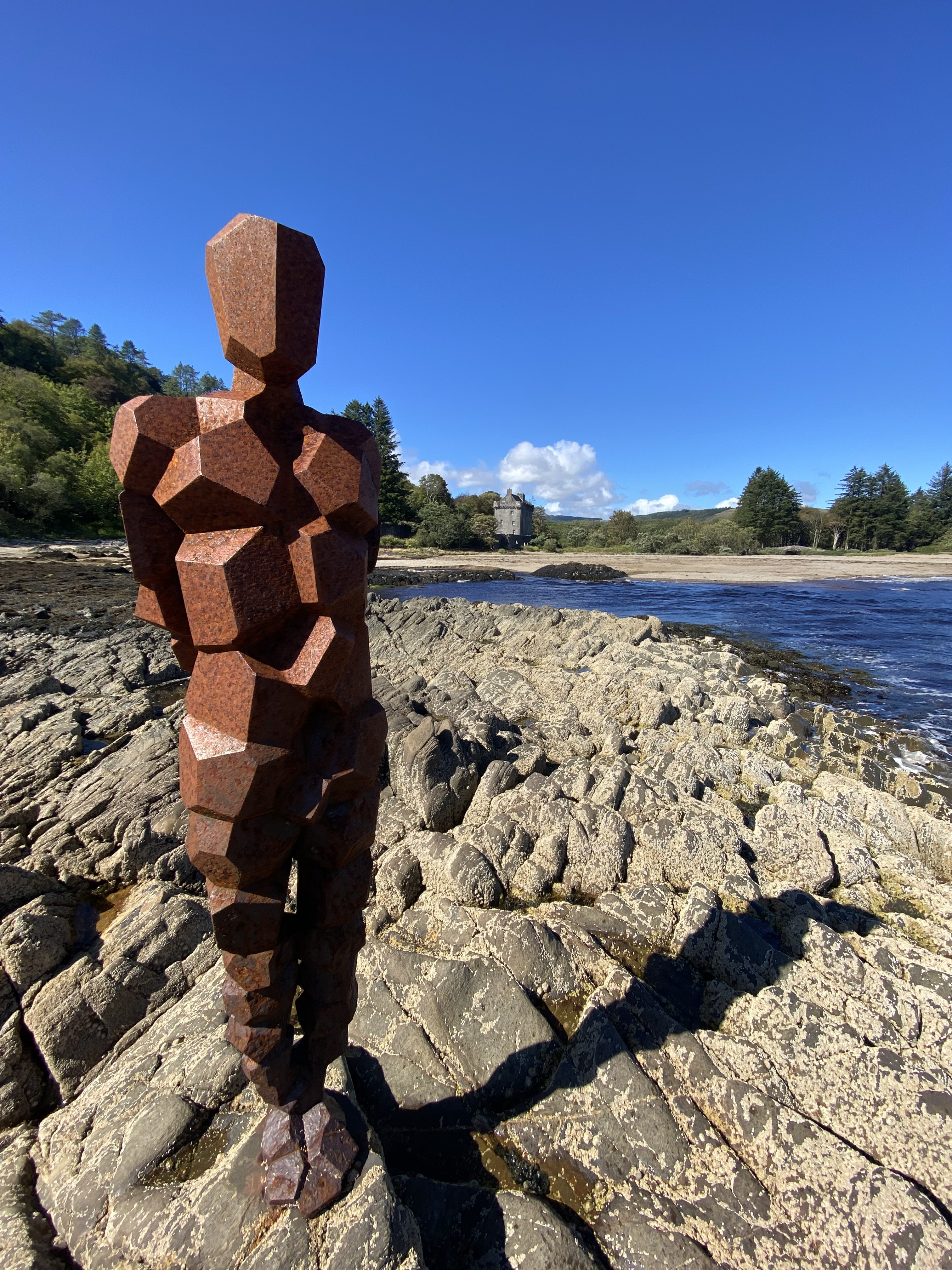 Kintyre Way: Carradale to Lussa Loch.  What a trail!  Described as impassible at high tide, and treacherous when wet.  The path was stunning and over multiple moss-covered rocks and deceptive grass fields that commonly gave way to hidden pools of water. 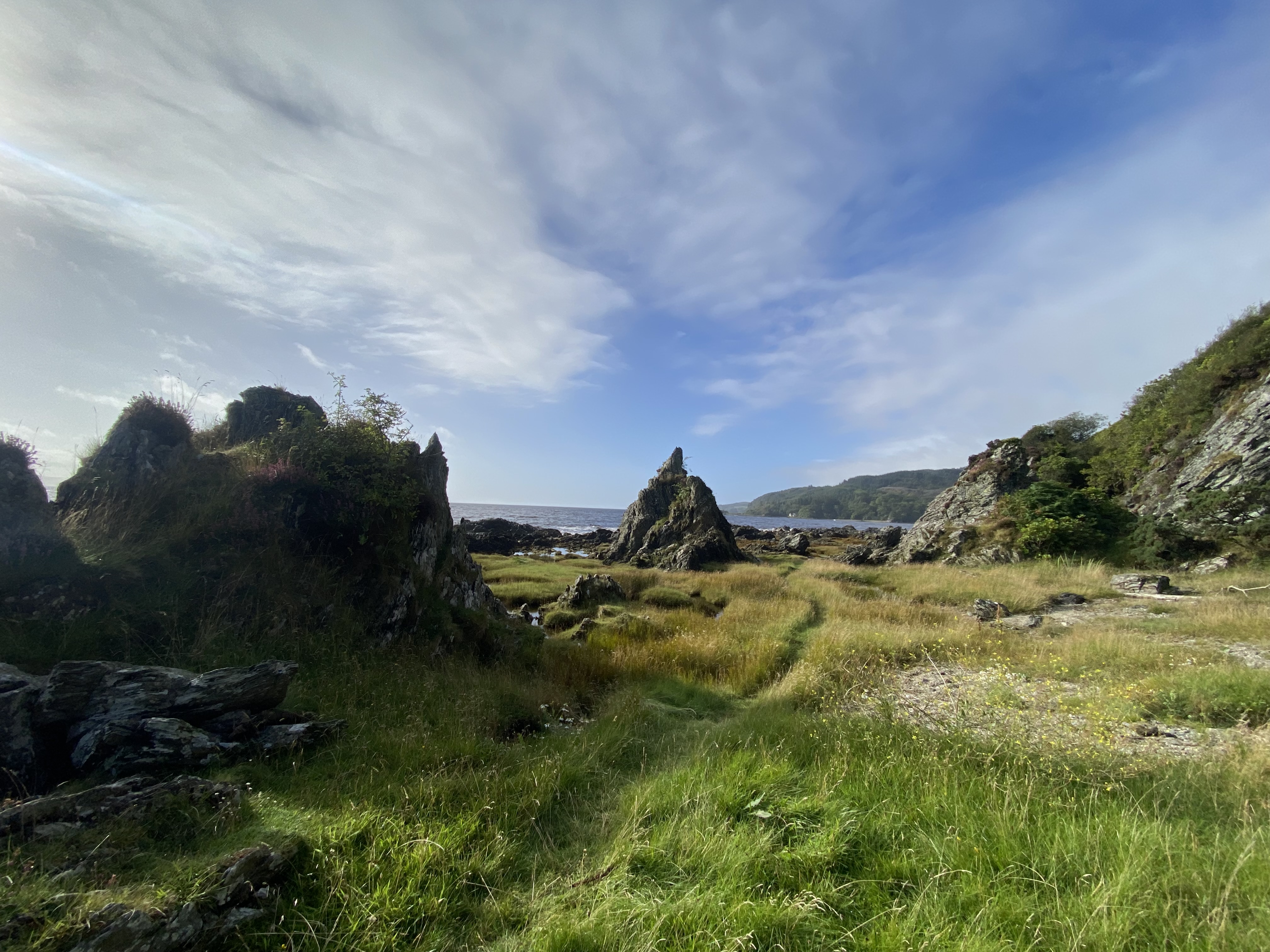 Kintyre Way: Campbeltown to Southend.  A lovely walk, mostly along the coast. 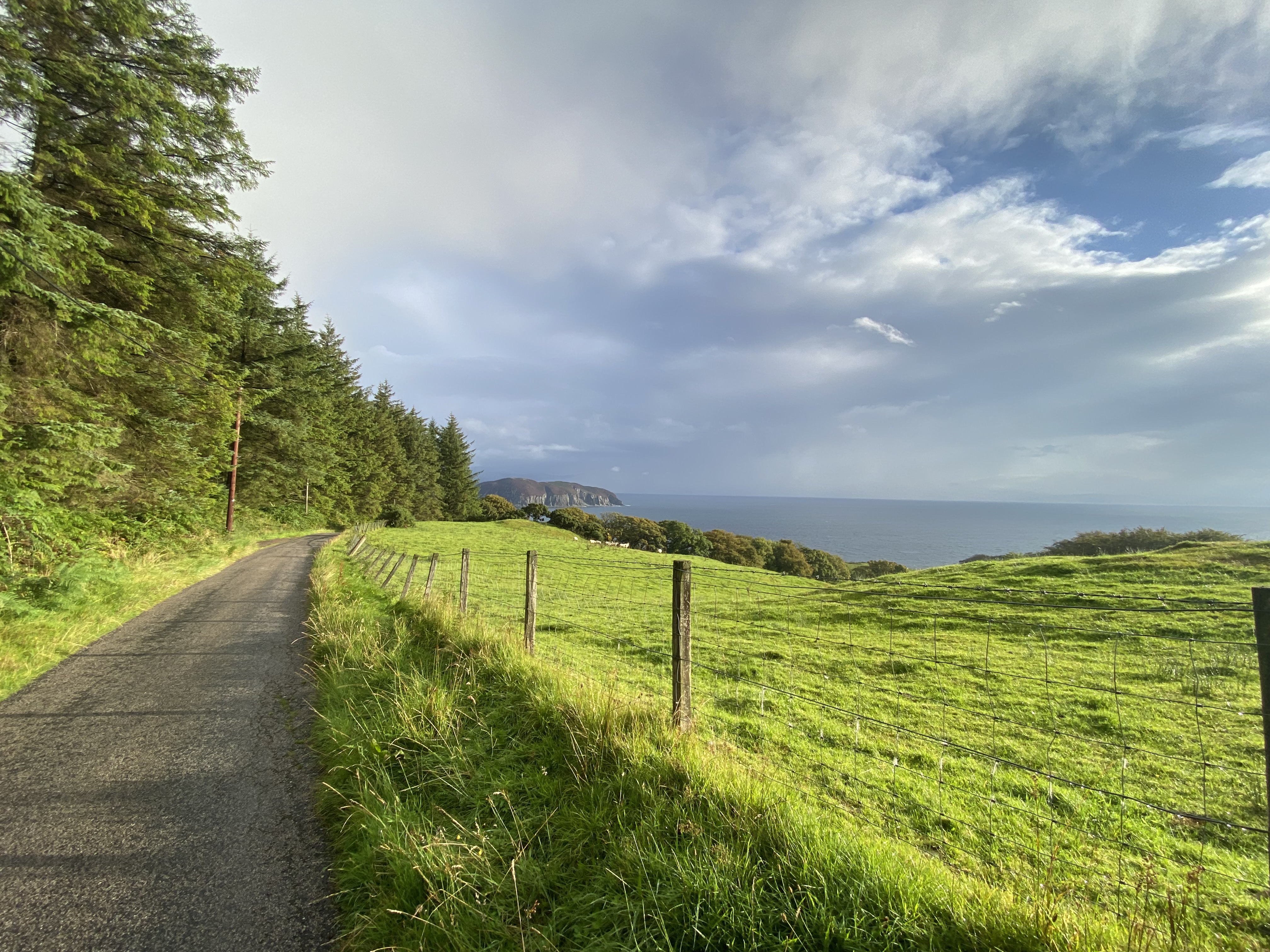 The true Mull of Kintyre.  The North Channel and Irish Sea were a stunning deep uniform blue.  Eleven miles in the distance, we had a clear look at Ireland’s coastline.  We zigged and zagged down to the lighthouse. 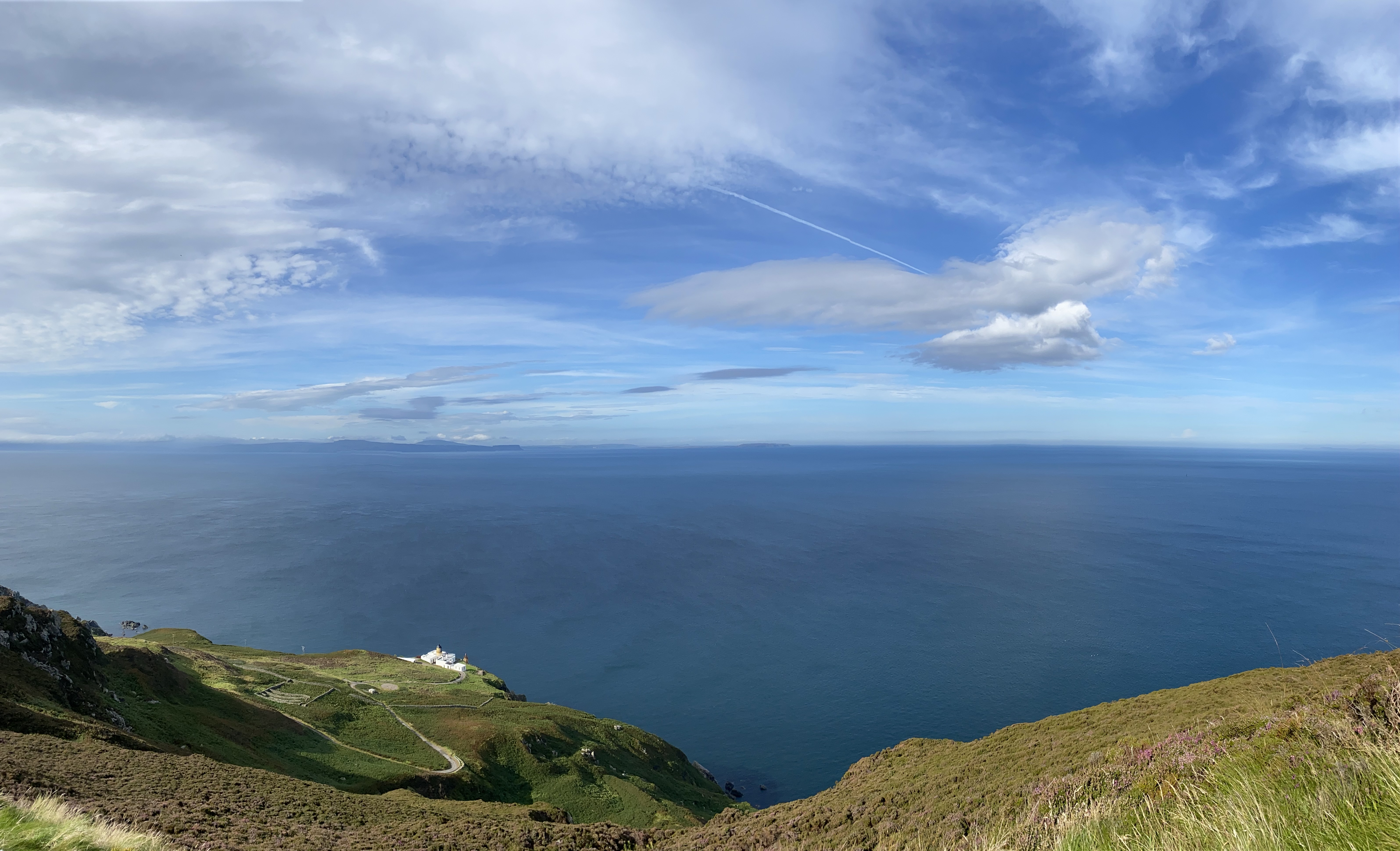 Kintyre Way: Southend to Machrihanish.  The most challenging leg, but an incredible journey.  When we met fellow walkers, they would simply relay ‘aye, you’ll know you’ve done it’ when we talked about this upcoming section.  Mostly uphill in a ‘climb to the clouds’ sort of manner on wet, boggy ground.  We again had views of the Northern coast of Ireland and stood for a time simply taking in the view – the peace – the EXPANSE of blue water before us with tiny white caps sprinkled here and there. 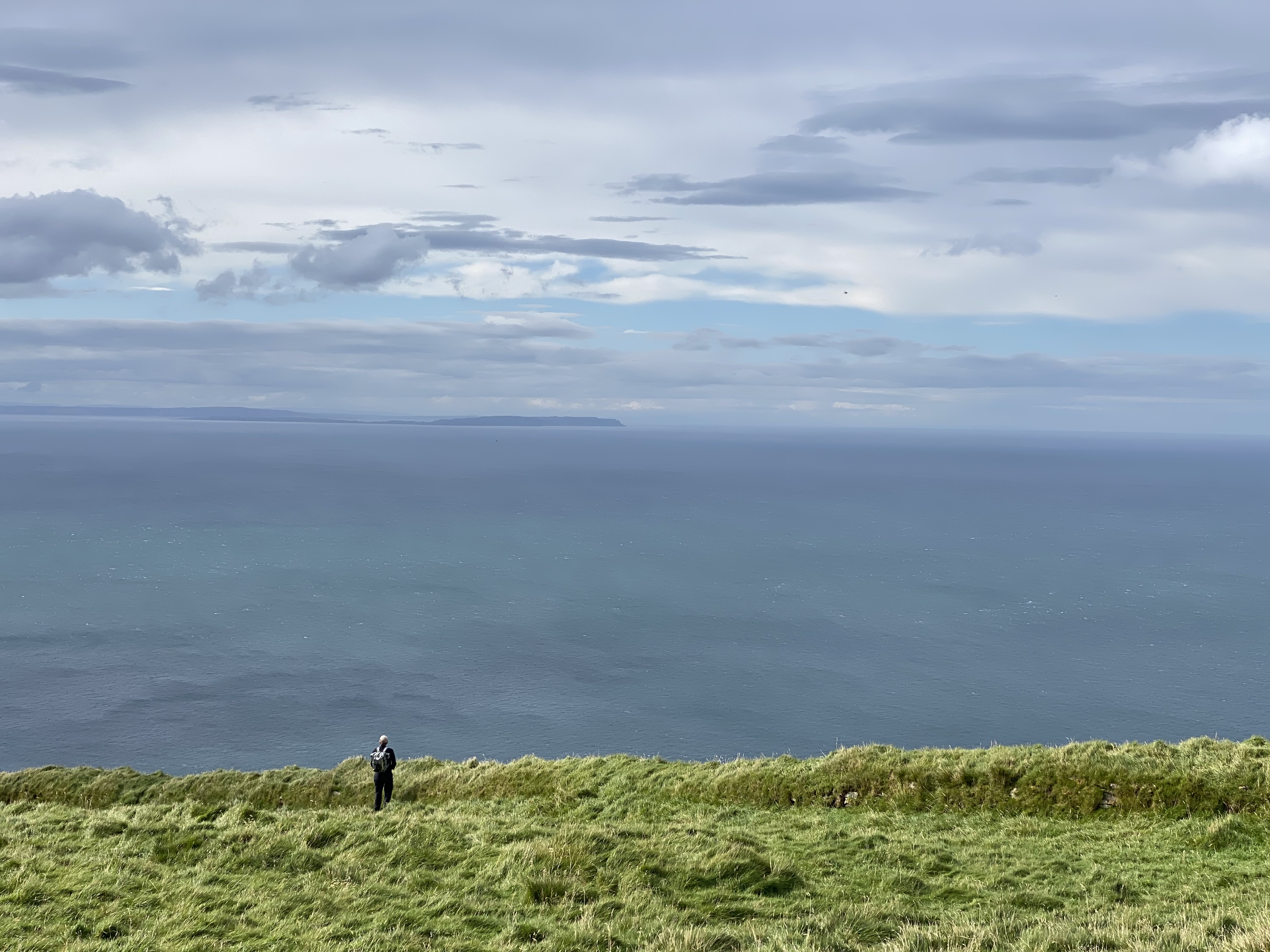 Kintyre Way: Southend to Machrihanish.  The most treacherous/slick part of the walk.  This fall-on-your shoulder/side/face/anything trail was worth it for the incredible views.  Mountain goat country – we even saw a few in the distance. 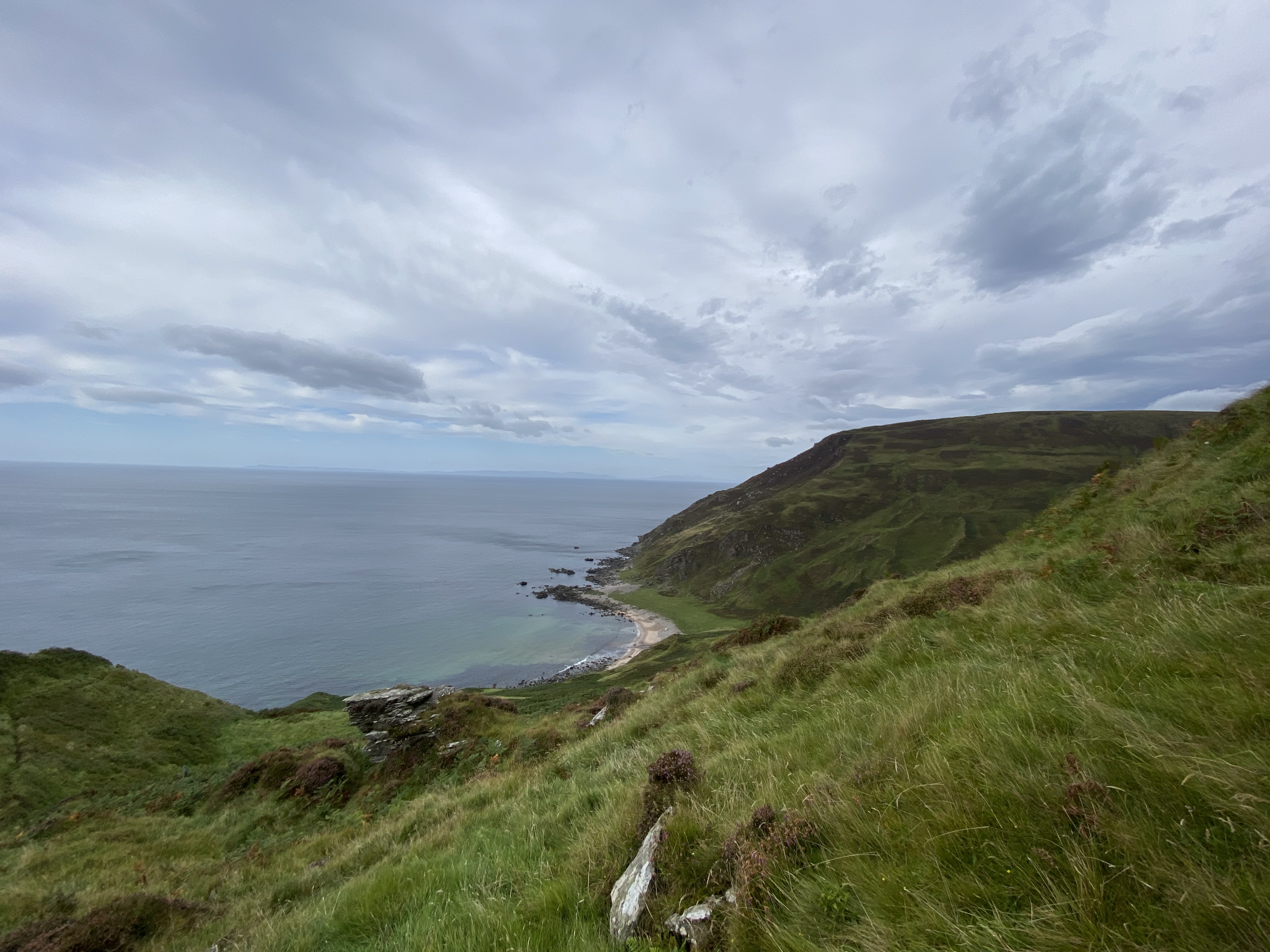 An example of mild bog. 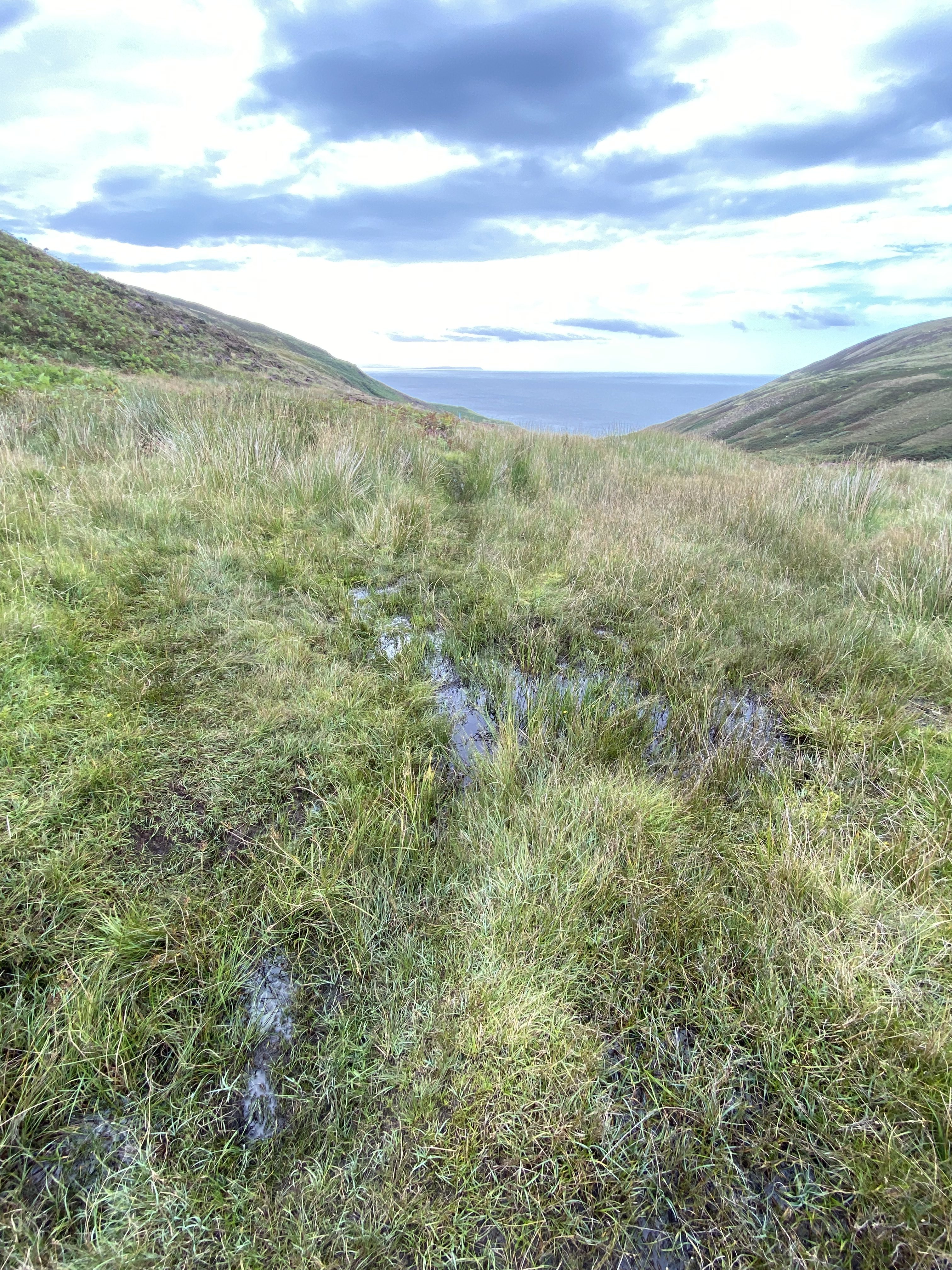 The Kintyre Way waymarker – blue poles visible on clear days, nearly invisible in thick fog!  We got lost several times along the trail, but eventually found our way. 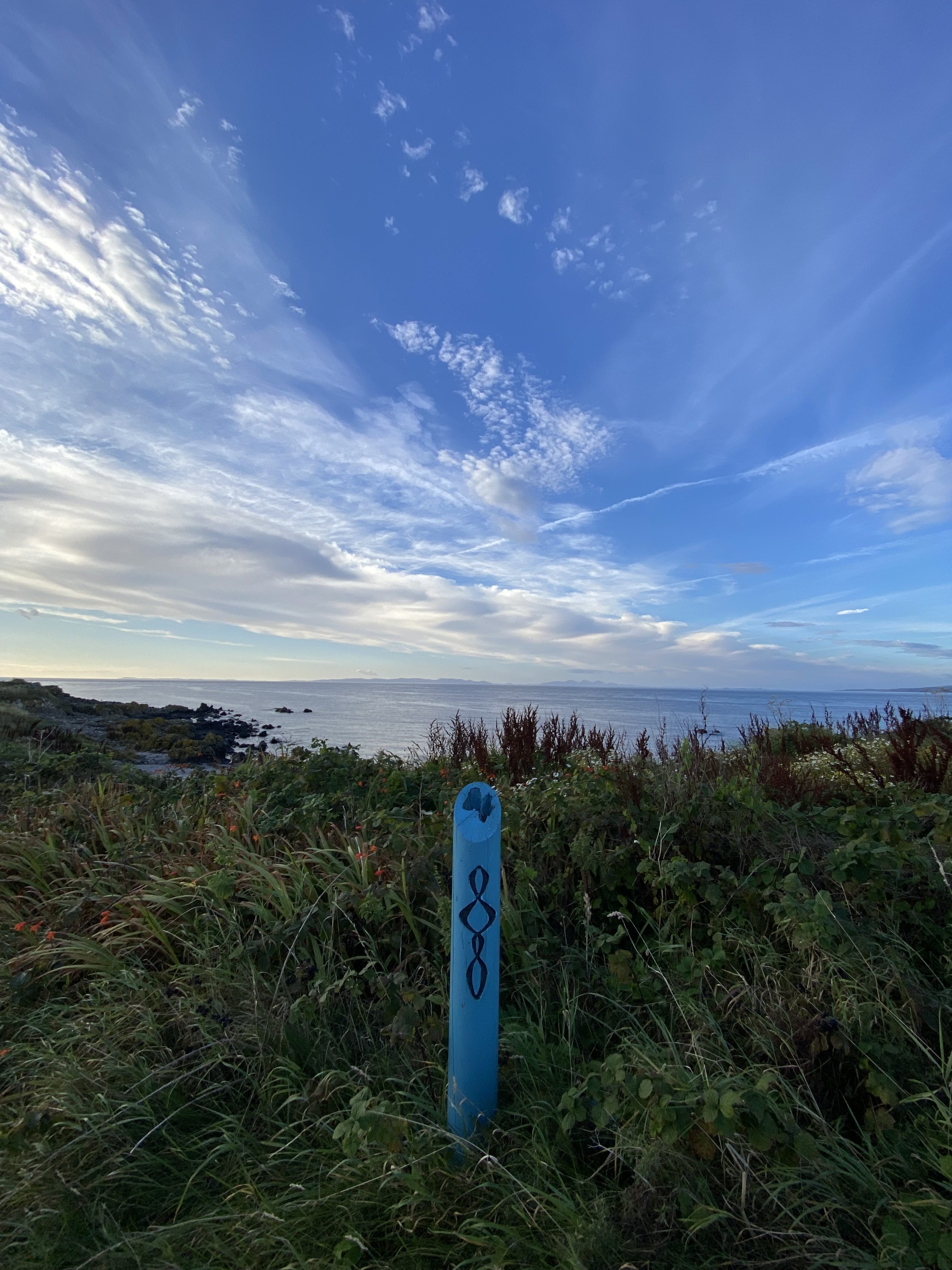