Over at the Faraday Institute and the Theos think tank, there’s a 40-question quiz that I recommend readers take. It’s FUN and will provide data for their project, which apparently is to show that science and religion are compatible (notice the two names in the first sentence below, both of whom tout compatibility for a living).

While the survey is supposed to determine people’s attitudes rather than push forward a compatibilist view, given that the Faraday Institute was established by a grant from the Templeton Foundation, and that the Theos think tank was, according to Wikipedia, “launched in November 2006 with the support of the then Archbishop of Canterbury, Rowan Williams, and the then Archbishop of Westminster, Cardinal Cormac Murphy O’Connor, and maintains an ecumenical position,” I don’t expect them to be totally objective about this.

Think of it as if Elaine Ecklund were giving a quiz and already knew how she was going to spin the data. Thus it becomes important for everybody to weigh in, especially because Theos announced it on Twitter (it’s interesting to read the followup comments to the tweet below):

Agree or Disagree? Take this new quiz and find out where you stand on science and religion – and more importantly: why? https://t.co/an5tF9Nkv9

Here’s the explanation of this three-year project:

. . . .Researchers in the UK (such as Fern Elsdon–Baker) and in the US (such as Elaine Howard Ecklund and John Evans) are bringing more nuance to a picture that has, heretofore, all too often been first simplified, then exaggerated, and finally militarised.

In particular, they have noticed how actual real, living human beings – in all their composite, complex, confused messiness – have been largely absent from the debate, a debate that has had much to say about evolution and cosmology and biblical literalism, but rather less about the wider personal, social, ethical, metaphysical, epistemological, and political concerns in which all such important debates take place. After all, if most of the news stories about science are not about evolution or the Big Bang, and most of the news stories about religion are not about fundamentalism or Genesis chapter 1, it seems strange that so many science and religion stories have been about evolution and Genesis.

We interviewed over a hundred leading experts – scientists, philosophers, theologians, communicators, from Susan Greenfield, Sue Blackmore and Angela Saini to Brian Cox, A.C. Grayling and Adam Rutherford – and generated nearly a million words’ worth of interview transcript. We also commissioned YouGov to conduct a massive questionnaire (over 200 questions/ statements) among over 5,000 UK adult respondents, which has generated data tables that could cover a football field. The results are fascinating and rewarding.

Over the coming months we will be releasing the data. There will be blogs, reviews, podcasts, reports, on–line seminars, research papers, and (eventually) books. There will be an on–line Science and Religion Compass (a bit like the political compass), that will allow people to measure their own ‘temperature’ in this debate, as well as another brilliant animation from Theos’ Emily Downe, drawing out the key issues that underlie these

Actually, after reading that I am not sure our data will actually be used. But there’s a 40-question quiz on the relationship between science and religion that you can take in about five minutes. Click below to go to the quiz:

For each of the 40 questions (actually, statements), you have to say how strongly you agree or disagree. Here is the scale and the first five questions: 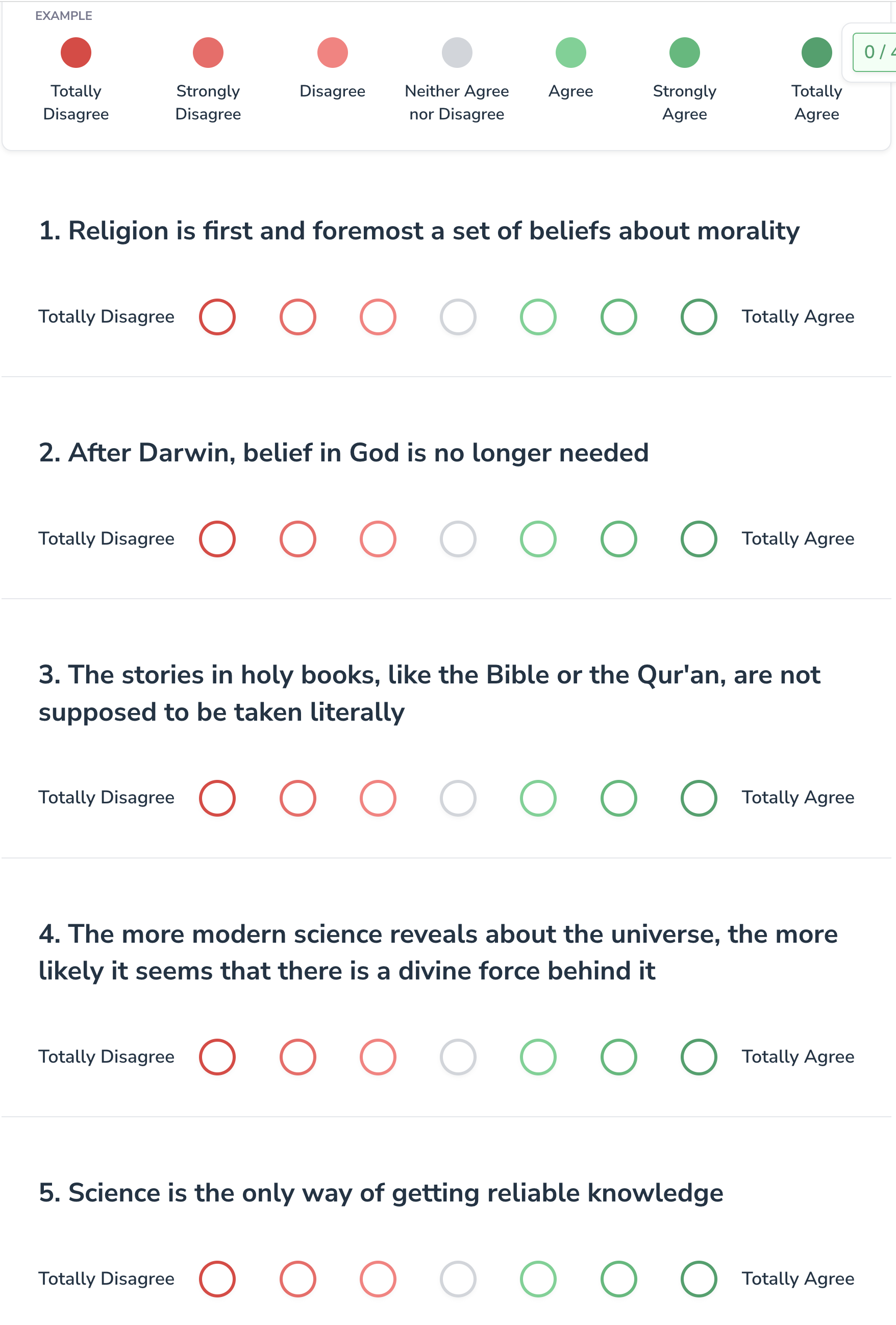 And here is where I fit on the survey results. First, the thermometer:

The warmer you are the more compatible you view science and religion. If you’re right at the very top – in the red zone – you see no incompatibility at all between them.

Conversely, if you’re right at the bottom – in the blue zone – you see science and religion as at war.

My temperature. No surprise here:

And where I fit in on the two-dimensional plot:

The x-axis (left to right) is about science. At the left hand extreme, lies the view that however important science is, it is certainly not sufficient. If you land at this end, you may not be a science-sceptic (indeed, you’re probably not a science sceptic) but you will be sceptical about science’s ability to explain everything. You believe the world is a complex place, and the tools of science – hypothesis, experimentation, measurement, falsification, etc. – are just one set among others – such as experience, intuition, pure reason, imagination, authority, revelation, etc. – that enable us to understand and navigate the world. In the jargon, this is sometimes known as pluralism.

. . .The y-axis (top to bottom) is about religion. At the top end lies the view that religion is, at heart, about beliefs: it’s about God, or revelation, or the supernatural, or miracles, or life after death, or doctrine, etc. It’s more about what you think than what you do. This, to use the jargon, is the substantive definition of religion, meaning that religion isn’t just a social or cultural phenomenon but has some content or substance to it.

At the bottom end lies the view that religion is, at heart, about its role in society; it is, to use the jargon, the functional definition of religion.

My position on the plot, an advocate of “scientism” (of course a pejorative term), and largely (but not entirely) of the view that religious views are founded on beliefs about the Universe, but also has sociocultural elements on top of this foundation: 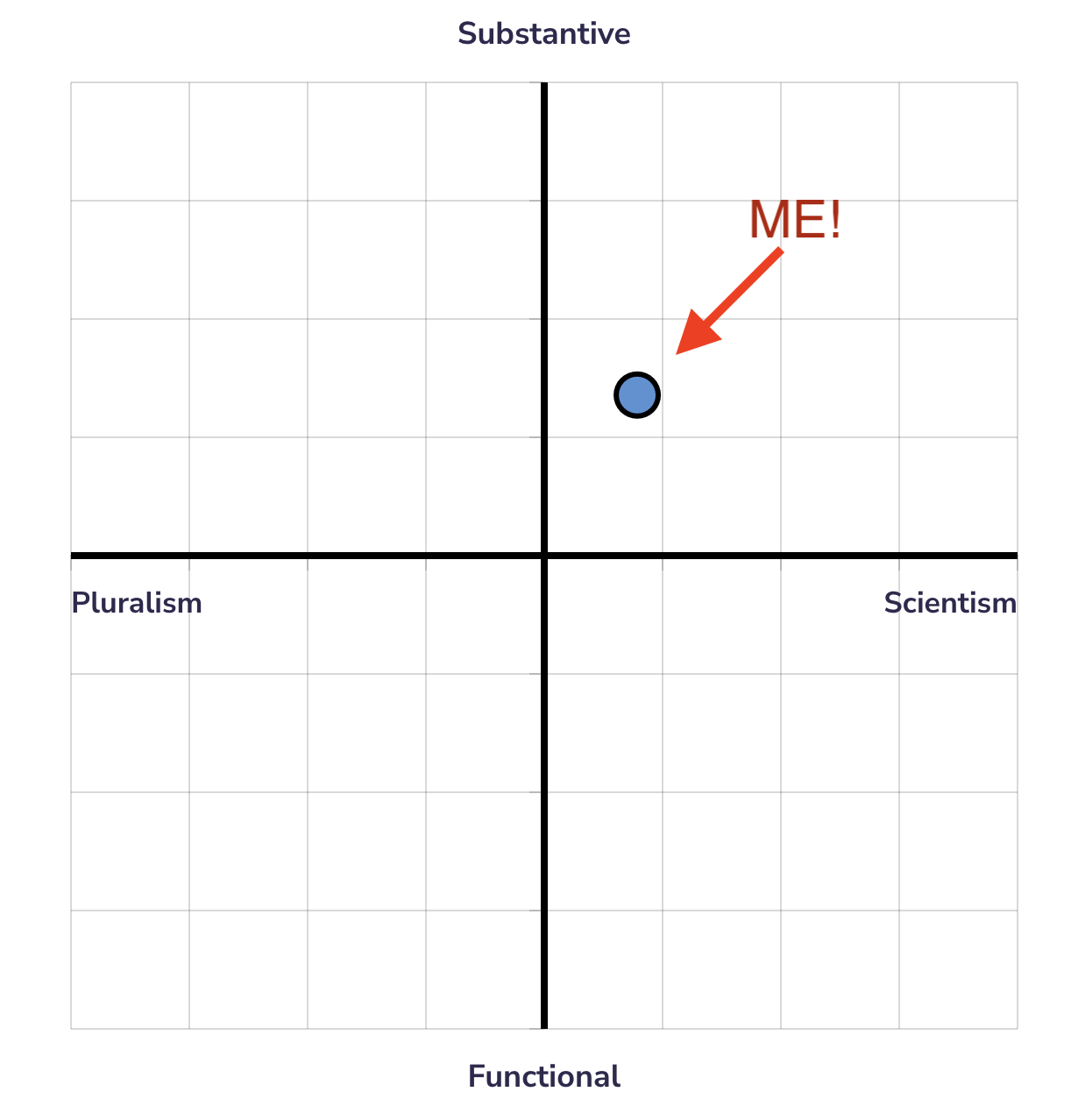 I fit in with Neils Bohr; i.e. I’m a science/ religion incompatibilist (yes, you can be a religious scientist, but you’re then espousing two “ways of knowing” at the same time). I would take issue with some of the placements. For example, they’re seeing Gould as a compatibilist who thought religion was not really about beliefs—the position he espoused in Rocks of Ages—but that was his attempt to make people like him and not what he really believed (or so I think).  And why are “new atheists” given their own dot while “Evangelical Christians” are not?  Well, I’d rather laugh with the sinners than cry with the saints.

And here’s my personality characterization from the quiz.

“ Faith is a virus, science is the cure ”

You think religion claims truth but you believe it is wrong, perhaps even dangerous. For you, the most authoritative voice and road to truth is through science. The further you are to right of the quadrant the more likely you are to believe that science is the only way to truth. And while you think that it’s possible for science and religion to live and let live, deep down you think there is an irreconcilable tension there. Ultimately, and especially if you’re at the extreme, “faith” is a virus and science is the cure. People who are in this area are likely to have a ‘cold’ temperature score.

That pretty much sums it up! Notice that I’m characterized as “cold”, another slam on incompatibilists.

Your turn: take the quiz and see how you do!

79 thoughts on “Take the Faraday Institute’s Science vs. Religion quiz!”