Now I’m not a doctor (I just play one in academia), so I’m not going to tell you to stop drinking so much water. After all, some people need to. But the upshot of this new article from The Washington Post (click on screenshot below) is that most people don’t have to act like camels, swigging and guzzling from their fancy water bottles that they tote everywhere. They even guzzle in public!  If you drink only when you’re thirsty, most people will be fine. Read on:

I have to say that, as a curmudgeon who been this way for decades, I always feel a bit snarky when I see full-grown adults toting water bottles everywhere with them, and swigging at random. Surely much of this comes from the medical “wisdom” that you need to drink 8 cups of water (roughly 64 ounces, or half a gallon) per day. And, of course, there’s water available everywhere in America, so you don’t need your own personal bottle.

I see much of this as an infantile behavior: adults needing, like infants, to suck on a bottle full of liquid. It’s just like adult cats “kneading” as a leftover behavior from their kittenhood. (Of course, I do carry a water bottle if I’m out for the day in a foreign land (many places don’t share the American habit of having water fountains widely available), or in places where the local water isn’t safe to drink (e.g., India).

But otherwise, I just don’t like drinking water. It has no flavor, and I drink it only when I’m thirsty. Usually that’s in the morning before coffee, and then with dinner (along with wine). I seem to do fine on about 20 ounces per day, and have never been dehydrated. Even worse: the medically-inspired advice to drink lots of water has even boosted the most useless industry ever: bottled water, which is no better than tap water and has the byproduct of producing plastic refuse: 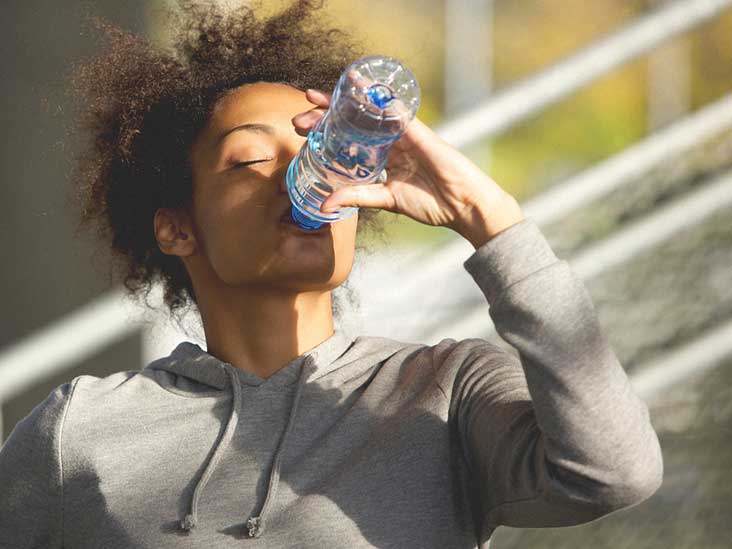 Now I know what some readers will say.  “I LIKE drinking water!” If so, more power to you, but I take that statement with the same grain of salt I do when someone tells me “I LIKE eating broccoli” or “I don’t eat desserts because I don’t like sweets.”  But this news, from last month’s Washington Post, heartened me. No longer do I—or you—have to feel like if you’re not sucking on the adult version of a baby bottle, you’re doing something wrong.

Here’s the news, and look at where that medical dictum comes from! (My bolding):

We’ve all heard the age-old advice to drink eight cups of water a day. But if you fall short, don’t worry: That advice is probably wrong anyway.

That’s according to new research, published in the journal Science, which found that for most healthy adults, drinking eight cups of water a day is completely unnecessary. The advice is misguided in part because it doesn’t take into account all the water that we get from our food and from other beverages like coffee and tea. The research found that our water needs vary from one person to next and depend on factors like your age, sex, size, physical activity levels and the climate that you live in.

The authors of the study say that for healthy adults, there is no real benefit to drinking eight cups of water a day. Nor is it dangerous: Your body will just excrete the extra water you consume in your urine.

“If you drink eight cups of water a day, you’ll be fine — you’re just going to be spending a lot more time in the bathroom,” said Herman Pontzer, a professor of evolutionary anthropology and global health at Duke University and a co-author of the study.

The advice to drink eight cups of water a day stems from a 1945 recommendation from the Food and Nutrition Board of the National Research Council, which encouraged adults to consume about 64 ounces of water daily. The recommendation referred to a person’s total daily intake of water, including from all their foods and beverages, but it was widely misinterpreted to mean that people should drink eight 8-ounce glasses of water every day.

Some experts have argued that the widely held belief was not rooted in science. One study of 883 elderly adults for example found that there was no evidence of dehydration among the 227 people in the study who routinely drank less than six glasses of water daily.

“Until we have more evidence-based documentation that fluid intake of eight glasses per day improves some aspect of an elderly person’s health,” the researchers concluded, “encouraging a fluid intake above a level that is comfortable for the individual seems to serve little useful purpose.”

Nevertheless, the advice is so widely ingrained that many companies use it to market products. You can buy 64-ounce water bottles designed to motivate you to drink the equivalent of eight cups of water daily, and water-bottle sensors that will track your water intake and remind you to “hydrate” every 30 to 40 minutes.

SENSORS THAT REMIND YOU TO HYDRATE EVERY 30-40 MINUTES! WHAT A WORLD!

“We have guidelines telling people how much water to drink,” said Pontzer, who wrote a book on metabolism called “Burn.” “But the reality is that people have been kind of making it up.”

Indeed. I am comfortable with two or three medium sizes glasses a day, on top of wine, coffee, and other beverages. I estimate that I drink about 24 ounces of pure water per day—less than half the recommendation.

I wonder if any reader will be heartened by this, or will most people get defensive and say they like water (what’s to like? it’s flavorless), or that there’s nothing to lose by swilling the stuff (yes there is: hours in the bathroom). Many of my male friends (women won’t share this information) tell me that they get up several times per night to urinate.  I never have to do that, and I’m fine.

Here’s what the article recommends (my bolding again):

So how much water should you drink? The answer is simple: Drink when you’re thirsty. Prioritize water, and try to avoid sugary drinks, which can cause metabolic problems. Coffee and tea are fine as well.

Get that? (I bet you were going to inform me that coffee is a diuretic.) It seems that, all along, I’ve been doing what’s recommended. The final advice:

While the caffeine they contain can increase urination, they will still be hydrating so long as you consume less than 400 milligrams of caffeine, Rosinger said. Keep in mind that you get water from your food as well. Some water-rich foods are fruits, vegetables, beans, yogurt, brown rice, and soups.

“If you’re paying attention to your body and drinking when you feel like you need to, then you should be fine,” Pontzer said.

And here’s the Science paper, which reports that a lot of normal water intake (up to 50%) comes from food, and 85% from food and other liquids, including coffee and juice). Water generated by your metabolism constitutes about 10% of your daily water usage. Drink 8 glasses per day? Fuggedaboutit!

. . .when people talk about their fondness for cheese, it’s often in a guilty way, as in, “Cheese is my weakness.”

“Cheese is packed with nutrients like protein, calcium and phosphorus, and can serve a healthy purpose in the diet,” says Lisa Young, an adjunct professor of nutrition at New York University­. Research shows that even full-fat cheese ­won’t necessarily make you gain weight or give you a heart attack. It seems that cheese doesn’t raise or reduce your risk for chronic diseases, such as heart disease and Type 2 diabetes, and some studies show it might even be protective.

Don’t sue me if you stop drinking water, chow down on cheese, and then get sick. I am just the messenger here!

73 thoughts on “Medical revision: You probably don’t need to drink 8 cups of water per day (and you can eat more cheese)”