P-22 was probably the most famous mountain lion (Puma concolor; aka “puma” or “cougar”) in the world because he lived in Los Angeles and many residents became fond of him. He has his own Wikipedia page, which says, among other things, this:

P-22 (c. 2009/2010 – December 17, 2022) was a wild mountain lion who resided in Griffith Park in Los Angeles, California, on the eastern side of the Santa Monica Mountains. P-22 was first identified in 2012 and was the subject of significant media attention, including numerous books, television programs and other works of art. P-22 was often recorded prowling in the Hollywood Hills neighborhood of Los Angeles. He was monitored by a radio collar. P-22 remained in Griffith Park for ten years until he was captured then euthanized on December 17, 2022, after suffering traumatic injuries consistent with being hit by a car in combination with several longer-term health issues.

As you see, he was euthanized just recently, and there was a lot of sorrow (see a sample obituary here, which also announced a memorial service). The problem is that P-22’s body, for which scientists had plans (not to mount or stuff, but to study), is being claimed by Native Americans in the area, who want it turned over to them so they can give it a spiritual burial in Griffith Park.  Click on the screenshot to read the LA Times article: 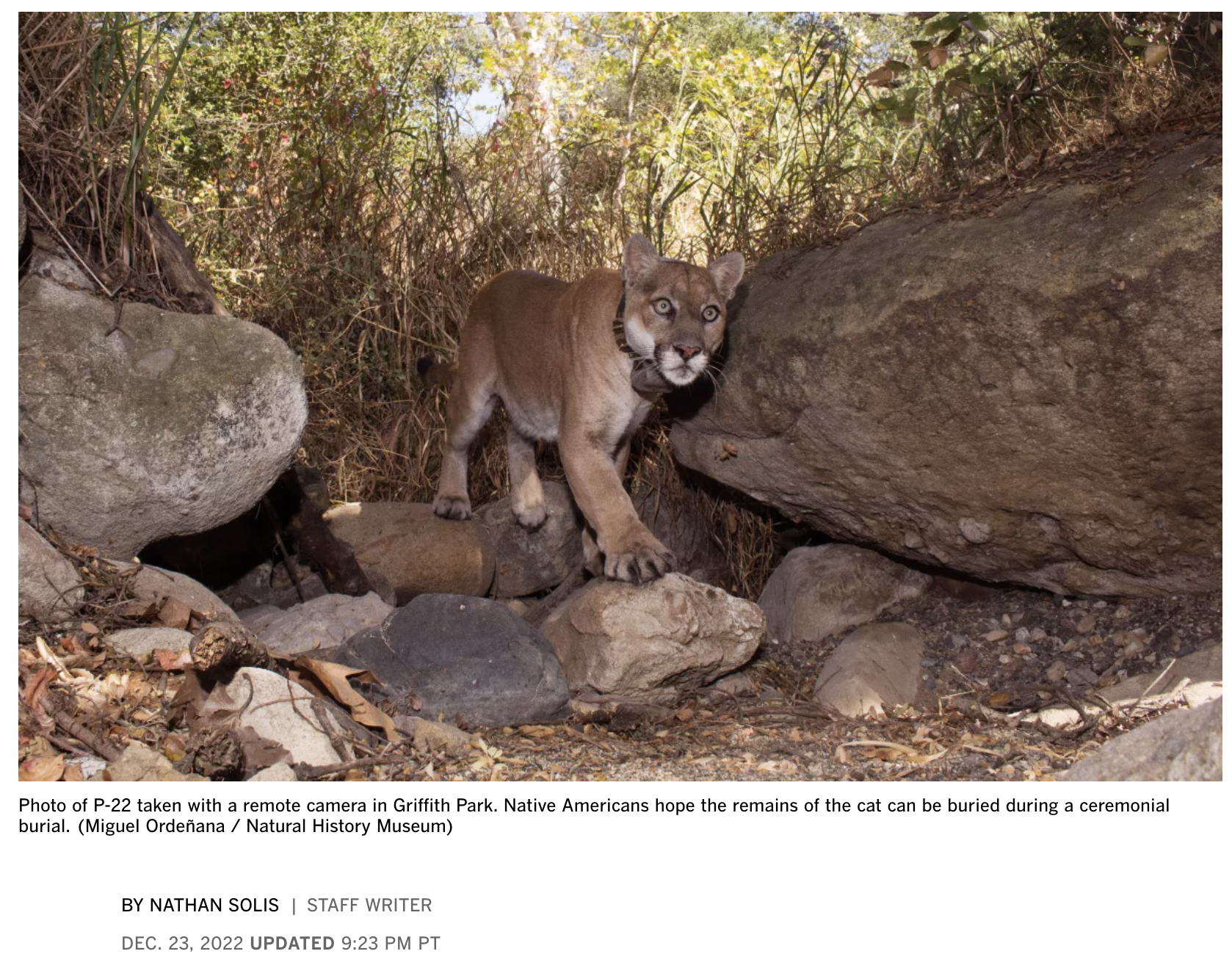 There’s a federal law that Native American remains or artifacts be turned over to those populations who can show a cultural or genealogical connection to these remains. As archaeology professor Elizabeth Weiss describes it, it’s

. . . the Native American Graves Protection and Repatriation Act (NAGPRA). The law requires that federally funded researchers who discover or work with Native American human remains or cultural items must turn these finds over to such modern-day Native American tribes that can demonstrate a close ancestral or geographical linkage.

But as Weiss recounts in her story, which I heard at first hand at the Stanford free speech meetings (I introduce myself because she was wearing nice cowboy boots), the law has been used way too broadly, especially with respect to Weiss’s own research:

But as I have written previously, the law has been interpreted in an overbroad way, such that unearthed Paleoindian skeletons that are thousands of years old are now being successfully claimed by modern tribes that have little or no connection to the specimens in question.

As a result of NAGPRA—and its state-level counterparts, such as the California Native American Graves Protection and Repatriation Act (CalNAGPRA)—scientists are being denied the opportunity to analyze such discoveries as part of their research. In some cases, moreover, laws such as NAGPRA and CalNAGPRA have become vehicles for activists to enforce their spiritual and religious beliefs at the expense of secular scientific research. As reported earlier this year in Quillette, this can include explicitly sexist religious or spiritual prohibitions on women handling (or even gazing upon) tribal artifacts.

I speak here from personal experience, as my own anthropological research at San José State University (SJSU) in California has been negatively affected by NAGPRA and CalNAGPRA. And I have come to regard these laws as a threat to free academic inquiry, especially since they’re now being used to repatriate Native American remains from museums and universities before they’ve been properly analyzed with modern scanning technologies. Denying researchers the ability to study unearthed human remains harms our ability to understand the past and help the living.

Weiss studies human remains up to 3,000 years old in California, and she’s been prohibited from studying the remains in her own university’s collection, or even studying X-rays of those bones (read the story). And, as she told me in Stanford, she’s not even allowed to show pictures of the boxes that hold the bones within. It’s a sad story that could be resolved with much less rancor if two things happened: the Native Americans could make a convincing case that remains are connected to their group, and if scientists were allowed a reasonable period to study the remains before they were handed over to the group to which they belong. Otherwise, we lose valuable knowledge about the past.

Weiss’s career has been considerably set back by her being forbidden by her own school from studying bones that have no clear geneaological connection to any present group. For a while the Native American groups were even demanding that she not be allowed to study bones from Tunisia!

In fact, thinking it over, I don’t automatically buy claims about any present-day “ownership” of ancient remains, or even whether a certain indigenous group can claim ownership of remains found on land that was once theirs. This is religiously based, of course, as it is with the case of P-22 (see below).  This differs from a case of returning cultural artifacts stolen from countries (like the Elgin Marbles), as the connection there is very clear: after all, the Parthenon is in Athens.

But although I haven’t decided about the repatriation of human remains, one thing I’m dead certain about is that Native Americans cannot claim the remains of a modern-day mountain lion and prevent scientists from studying it. There is no case to be made that a Native American group—in this case the “Gabrieleno/Tongva San Gabriel Ban of Mission Indians”—has either genealogical or cultural claim to a felid’s body and bones.

Here’s the kerfuffle in short:

Now that P-22 has been euthanized by wildlife authorities, it’s unclear what will happen to the remains of the famous mountain lion. While government agencies and museum officials consider the final resting place for the cat, the Native American community in Southern California wants P-22 to be buried near Griffith Park with a ceremony that honors his spirit.

The Natural History Museum of Los Angeles County received P-22’s body from the California Department of Fish and Wildlife on Friday. Although previously considered, museum officials said Thursday they do not plan to taxidermy P-22’s body or put his remains on display, which was a major concern for the Native American community.

But it’s still unclear what the future holds for the big cat.

Researchers were already in the process of collecting samples and performing a necropsy — a type of an animal autopsy — on P-22 when they learned about the concerns from the Native American communities. That process has been put on hold while the museum gathers more feedback from those groups. Several Native American people contacted by The Times said they had not initially been approached by the museum for feedback but have since been in talks about how to honor P-22’s remains.

Here’s why scientists want to study the remains:

Research on P-22’s body could show the firsthand effects of an urban setting on a mountain lion who managed to eke out his existence for more than a decade surrounded by humans, according to biologists. It’s not likely that there will be another like P-22, so he would yield unique information about his experience, conservationists say.

In fact, even though he won’t be put on display, the Native Americans don’t even want P-22 to be kept as a stored specimen so that future work can be one on the remains. Let me emphasize again: this beloved animal is an EX-CAT, singing with the Choir Invisible. Bereft of life, P-22 rests in peace. But at least the cat can still help us understand our world.  Not, however, if those with “other ways of knowing cats” have their say:

But the thought of P-22 going to a museum as a specimen fills tribal community members with dread. [JAC: DREAD? That’s a bit histrionic.]

“That’s not our way. That’s a scientific colonial way,” said Kimberly Morales Johnson, tribal secretary of the Gabrieleno/Tongva San Gabriel Band of Mission Indians. “That cat is a relative to us.”

The Tongva word for mountain lion is tukuurot. In their creation story, mountain lions were one of several animals that watched early humans grow and flourish.

I don’t think that’s sufficient to establish claim to the body.  But the fracas remains:

Members of the Gabrieleño Band of Mission Indians, Kizh Nation, have been asked to provide feedback for state projects built on their ancestral land numerous times, Indigenous biologist Matt Teutimez said. The process can include a blessing performed by tribal elders, and in other instances tribal members provide cultural and scientific feedback.

“They usually just want our participation. They already have their minds made up with their Western thought of how to remedy the problem,” Teutimez said. “All they wanted was our tribe to get involved for the photo op.”

He’s hopeful that P-22 can provide a teachable moment on how Western culture needs to reevaluate its relationship with wildlife and consider it more than just animals.

Normally, if there were an obvious connection to a group, I’d be more charitable about offering them input into what to do with P-22’s remains. But I see no claim here except the demands of people who were colonized and the fact that P-22 roams over lands that were once roamed over by several Native American groups. If keeping the body behind the scenes for scientific study—and yes, putting it on display would bother everyone—is useful, then by all means keep it in the Museum. No group can say they have a spiritually based claim to wild animals.

Here’s P-22 in 2019 from Wikipedia. Note that you and I are exactly as closely related to this cat as are all the Native Americans in America. 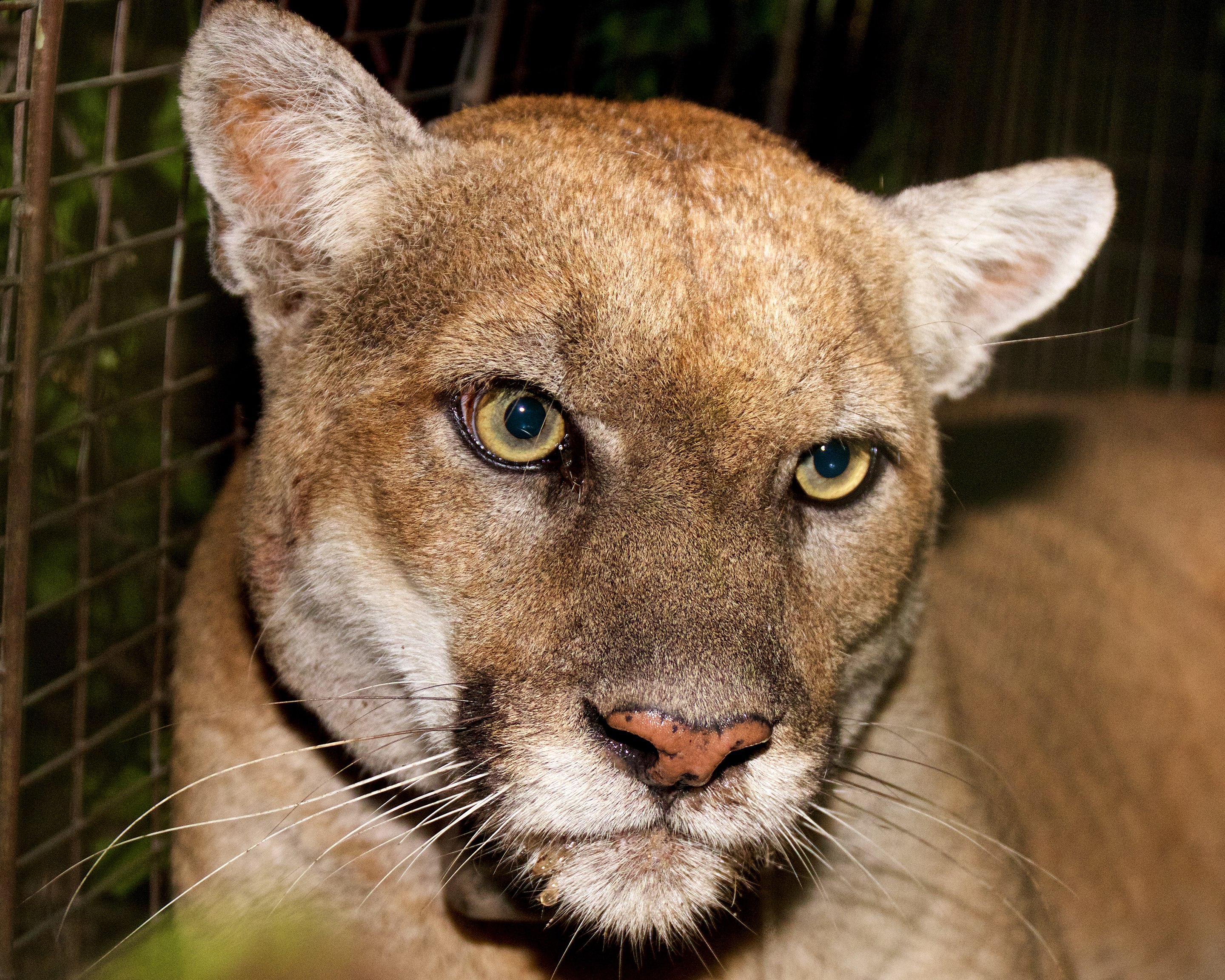