Greetings on the last day of 2022: Saturday, December 31, shabbos for Jewish cats. Soon we’ll start writing the wrong years on our checks—but who writes checks anymore? Foodwise, it’s National Vinegar Day, for no good reason I can see.

It makes much more sense to be National Champagne Day, World Peace Meditation Day, and these holiays associated with New Year’s Eve: First Night , Novy God (in Russia), Ōmisoka in Japan,the first day of Hogmanay or “Auld Year’s Night” in Scotland, the seventh of the  Twelve Days of Christmas, and the sixth and penultimate day of Kwanzaa.

Readers are welcome to mark notable events, births, or deaths on this by consulting the December 31 Wikipedia page.

And there’s a Google Doodle to mark the end of the year. Click to see where it goes (there’s confetti!):

*The House Ways and Means Committee has followed through by releasing Trump’s tax returns for the past six years. The NYT has a list of highlights (quotes are indented):

Trump made no charitable contributions in 2020

As a presidential candidate in 2015, Mr. Trump said he would not take “even one dollar” of the $400,000 salary that comes with the job. “I am totally giving up my salary if I become president,” he said.

In his first three years in office, Mr. Trump said he donated his salary quarterly. But in 2020, his last full year in office, the documents show that Mr. Trump reported $0 in charitable giving.

In a bad year for business, Trump didn’t take a full refund.

Yes, but he asked that the rest of the refund be applied to future taxes, and I don’t see what’s wrong with that.

His own tax law may have cost him.

The tax law Mr. Trump signed in late 2017, which took effect the next year, contained some provisions that most likely gave him an advantage at tax time — including the scaling back of the alternative minimum tax on high earners.

But one provision in particular drastically reduced the income tax deductions Mr. Trump could claim in 2018 and beyond: limits that Republicans placed on deductions for state and local taxes paid.

Fred Trump [Trump’s father] is a silent actor in the returns.

The paper says that building that Trump inherited were sold for about $39 million, recorded of course as gains.

For years, Mr. Trump used the accounting firm Mazars USA to prepare his taxes and those of his businesses. Donald Bender, Mr. Trump’s longtime accountant at Mazars, had long been listed on the former president’s taxes as his accountant.

The firm formally cut ties with Mr. Trump and his businesses this year, saying it could no longer stand behind a decade of annual financial statements it prepared for the Trump Organization.

The release of the documents on Friday set off a new round of attacks between Democrats and Republicans on Capitol Hill, including threats of escalating — and politically motivated — future releases of private tax information.

Well, I don’t see a smoking gun here, nor any reasons for criminal prosecution. The feds have plenty of other violations that they could charge him with, if Merrick Garland so decides.

*They now have a suspect in the gruesome stabbing death of four University of Idaho students, killed in their beds over a month ago (3 women and 1 man). I was beginning to think the trail had gone cold, but the law was keeping their cards close to their chest. The suspect had fled far away; he was arrested in Pennsyvania.

The killings initially mystified law enforcement and shook the small town of Moscow, Idaho, a farming community of about 25,000 people that had not had a murder for five years. Fears of a repeat attack prompted nearly half of the University of Idaho’s over 11,000 students to leave the city and switch to online classes.

Arrest paperwork filed in Monroe County Court said Bryan Christopher Kohberger, 28, was being held for extradition to Idaho on a warrant for first degree murder.

A law enforcement official confirmed the arrest to The Associated Press on condition of anonymity because the official could not publicly discuss details of the investigation ahead of a formal announcement expected later Friday.

A Ph.D. student by the same name is listed in the Department of Criminal Justice and Criminology at Washington State University, which is a short drive across the state line from the University of Idaho. Messages seeking more information were left for officials at WSU. DeSales University in Pennsylvania confirmed that a student by that name received a bachelor’s degree in 2020 and completed graduate studies in June 2022

. . . But the case broke open after law enforcement asked the public for help finding a white Hyundai Elantra sedan seen near the home around the time of the killings. The Moscow Police Department made the request Dec. 7, and by the next day had to direct tips to a special FBI call center because so many were coming in. By mid-December, investigators were working through nearly 12,000 tips and had identified more than 22,000 vehicles matching that make and model. 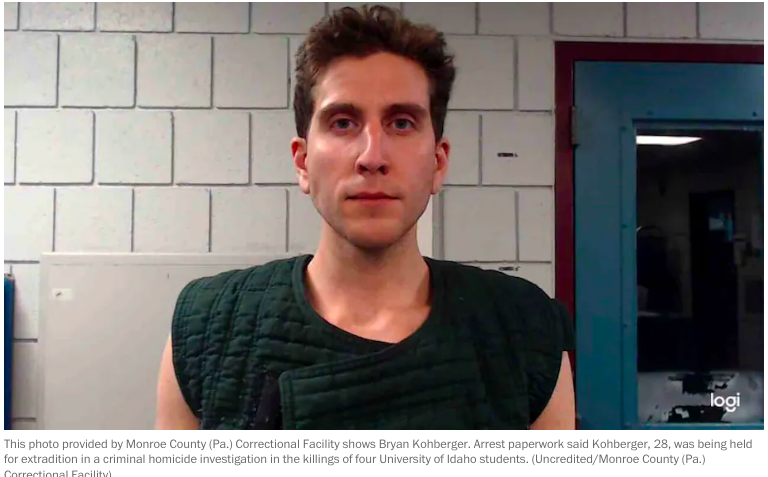 They didn’t say how they narrowed down the vehicle to one owner, but if they did’t have the car color and make, this case would have remain unsolved. And, weirdly, there’s no possible motive suggested yet

*Aung San Suu Kyi, the Burmese politician who received a Nobel Peace Prize and who’s been under house arrest or in prison for most of the last 30 years, has now been given a stiff prison sentence for violating several laws

A court in military-ruled Myanmar convicted the country’s ousted leader Aung San Suu Kyi of corruption Friday, sentencing her to seven years in prison in the last of a string of criminal cases against her, a legal official said.

The court’s action leaves her with a total of 33 years to serve in prison after a series of politically tinged prosecutions since the army toppled her elected government in February 2021.

The case that ended Friday involved five offenses under the anti-corruption law and followed earlier convictions on seven other corruption counts, each of which was punishable by up to 15 years in prison and a fine.

Her previous convictions had landed her with a total of 26 years’ imprisonment.

U.S. observers regard these charges as unfounded and politically motivated, and I find this distressing. They just won’t let her alone. On the other hand, I used to really admire this woman as a courageous beacon of morality, but my admiration cooled considerably when she didn’t speak up against the nation’s persecution of the Rohingya Muslims

*Over at Bari Weiss’s substack, Nellie Bowles once again has her snarky Friday news summary: “TGIF: One last time for 2022.” I will submit three items for your approval:

→ Is George Santos even his name? One New York Republican congressman-elect had a compelling story: He was a self-made businessman with 13 properties in his real estate portfolio; he had worked for Citigroup and Goldman Sachs; he was the descendant of Holocaust survivors; he had a mother who died in 9/11; he graduated from Baruch College, and also had—or maybe has—a brain tumor. But when reporters went to do a fairly standard profile of him, they discovered that none of it is true. He admitted to “embellishing” almost all of it and is now under investigation by federal prosecutors. My question: If you were making up a fake college, why choose Baruch? Go big or go home, Santos! Yale or bust.

Meanwhile, in other truly dystopian headlines, Time magazine is coming in hot with: “The White Supremacist Origins of Exercise.” And Consumer Reports this month has an investigation into the high lead and cadmium levels in popular chocolate, pointing out the lead in the exact overpriced chocolate that I’ve been eating. Great. 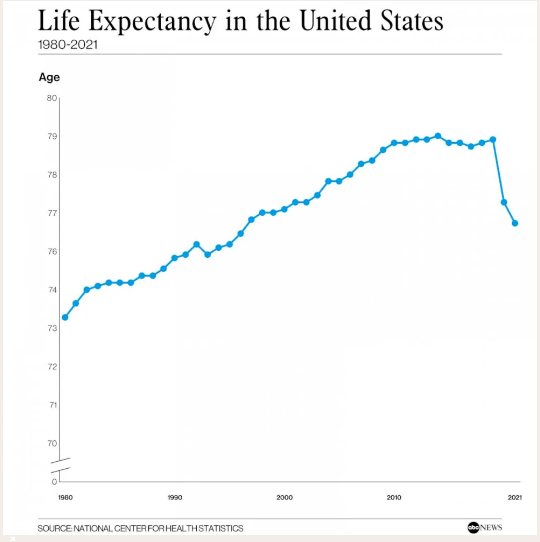 *Lettie Teague, the Wall Street Journal’s wine columnist, has a list of seven wine trends from 2022 that she’d like to see go away. I want to single out one of them as particularly heinous:

The price of wine, particularly wine sold in restaurants, has spiked over the last year. Built into that price hike are the costs of shipping, glass bottles and even wine labels, all of which have increased—but not to the extent some restaurateurs would have their customers believe.

Markups on wine have been considerable this past year, and in the case of some restaurants, especially egregious. I just don’t think that it’s necessary, let alone a way to build good will or long-term clientele, to charge diners $35 for a glass of non-vintage Champagne when the bottle costs about that same price retail.

I know it’s been a very challenging time for restaurants, that food and labor costs have increased and that wine has traditionally borne the burden of meeting an establishment’s bottom line. But do a wine list’s bottle prices have to be five times their wholesale cost? I’ve read that some wine drinkers feel the same.

A few WSJ readers have even let me know that they’ve switched to drinking beer. I certainly hope I don’t have to resort to hoisting pilsner next year.

I haven’t bought wine in a restaurant for over a year, because, in many places, you can get around this swindle. (I usually see wine in restaurants prices at least three times higher than the retail price, which means it’s six times higher than the restaurant paid for it.) First, see if there are good restaurants that have a BYOB policy. This is the case for many places in Hyde Park, and so I can bring a good bottle from my own collection and drink much more cheaply. Alternatively, some places have a “corkage fee”, where they charge you a certain amount to cover opening your own bottle, glassware, etc. I have never seen this higher than $15, and it’s a price I’d gladly pay to have an excellent wine that I brought myself. It’s still going to be cheaper than buying even the house wine.

And when I’m in France, which doesn’t have these policies, I drink the house wine, which is invariably decent. After all, I’m there for the food, not the wine.

Hili: Whence this love for fireworks?
A: From the monkey mind. 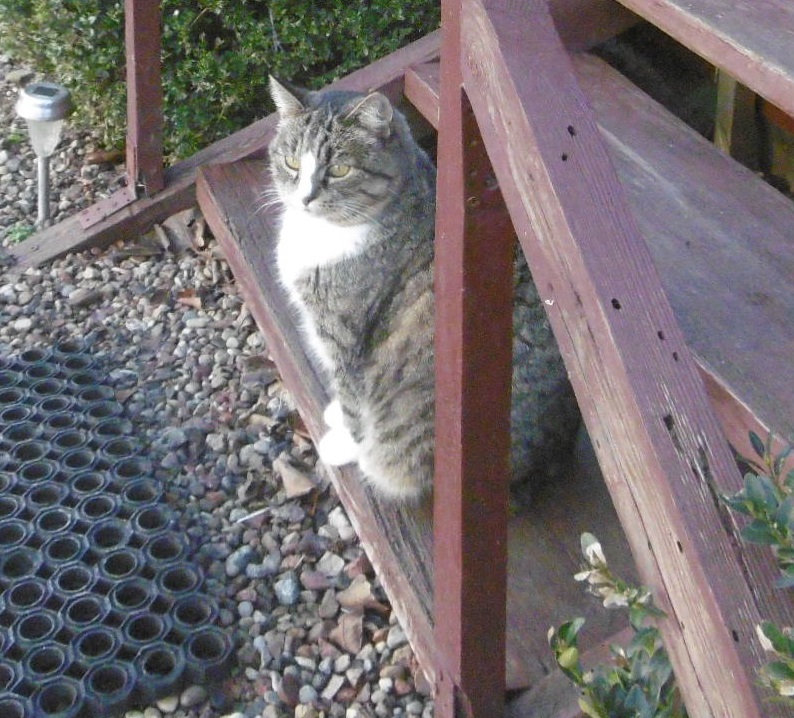 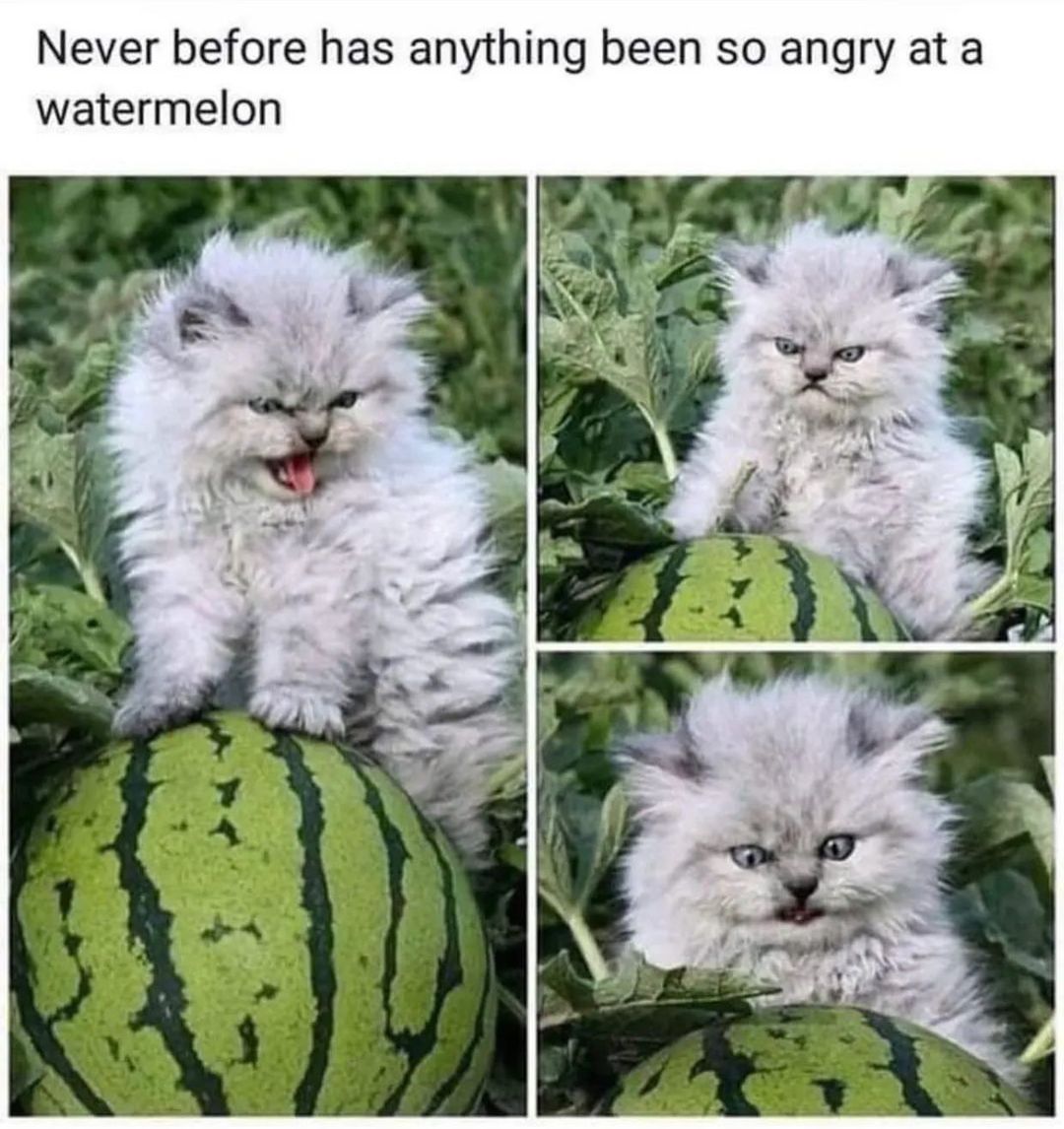 From Malcolm: a panto horse race (won by a cow). Sound up:

I believe this is a real exchange: 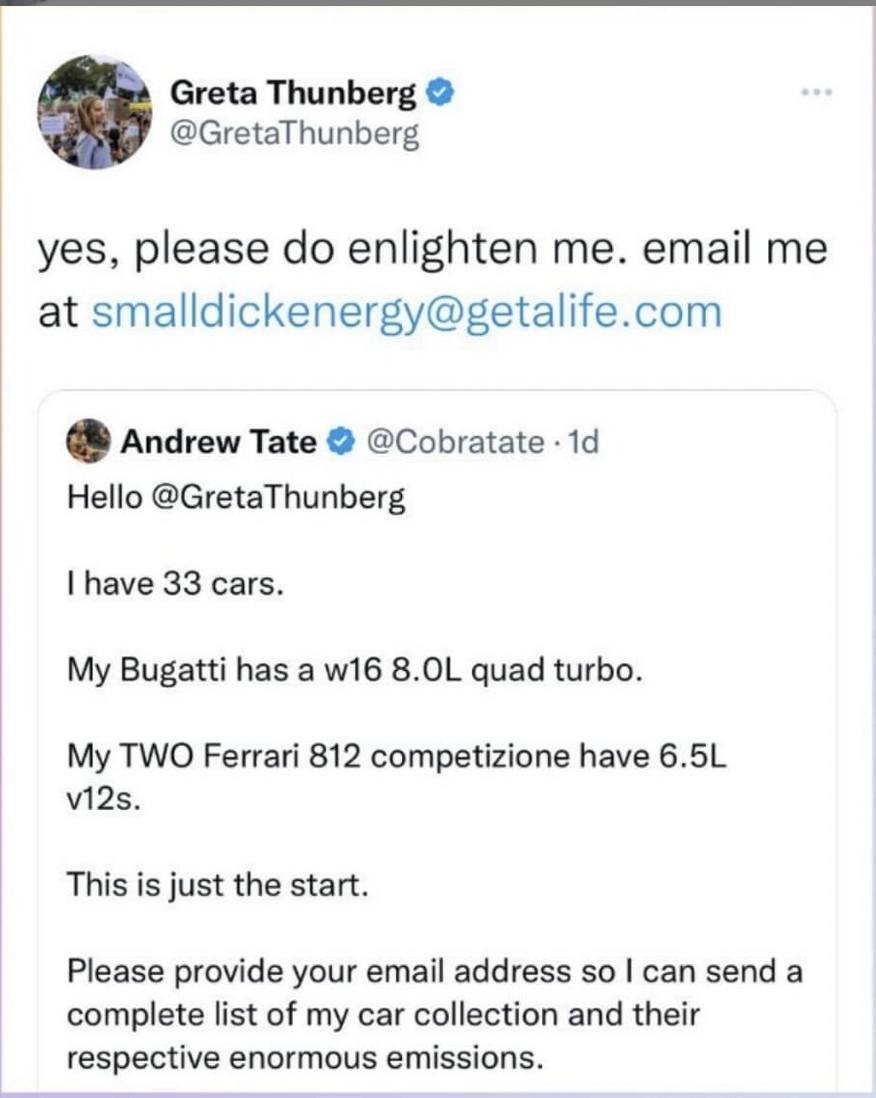 God is, as usual, beefing on Mastodon:

Posted by Masih yesterday. The protests continue in Iran. . .

The more the regime kills, the more protests erupt. Today Iranians commemorated the 40th day of #HamidrezaRouhi, protester killed by the regime in #Tehran. Despite the regime’s violence, Iranians chanted “on this year of blood, we’ll topple Khamenei”pic.twitter.com/lG2BVbwJnN

My retweet of a tweet from Matthew, showing the crucial indictment. The original Time article is here, and no, there’s nothing “sensitive” in the quote from the Magazine, though Twitter deems it so:

From Malcolm. I know cats like small places for security, but this is ridiculous!

From the Auschwitz Memorial: Two brothers gassed upon arrival:

In December 1942 he was deported to #Auschwitz with his brother Henri. They were murdered in a gas chamber after the selection. pic.twitter.com/9pOjPIS40N

Tweets from Professor Cobb. The two come from a “Dr. Frizzle”:

I get it, Mother Earth. cold does that to me too.

Some nominees for Tik Tok’s “best videos of the year”. The second one is best:

10. And finally, these Zebras whose scream still haunts me. pic.twitter.com/YgsJhIHuGq

What a lovely thing to do!

138 freezing bats rescued by the houston humane society after they fell from the waugh street bridge
📷: @HoustonHumane pic.twitter.com/EwjtVsIxpn