The goat entrails are not auspicious today, as it’s both Tuesday (the Cruelest Day) and the 13th (though not Friday the 13th): it is in fact Tuesday, December 13, 2022: National Cocoa Day. My favorite version is thick Spanish or Mexican chocolate served with hot churros.  Here’s some I had in Mexico City at El Moro, a very famous place for this treat.  Look how thick that chocolate is! 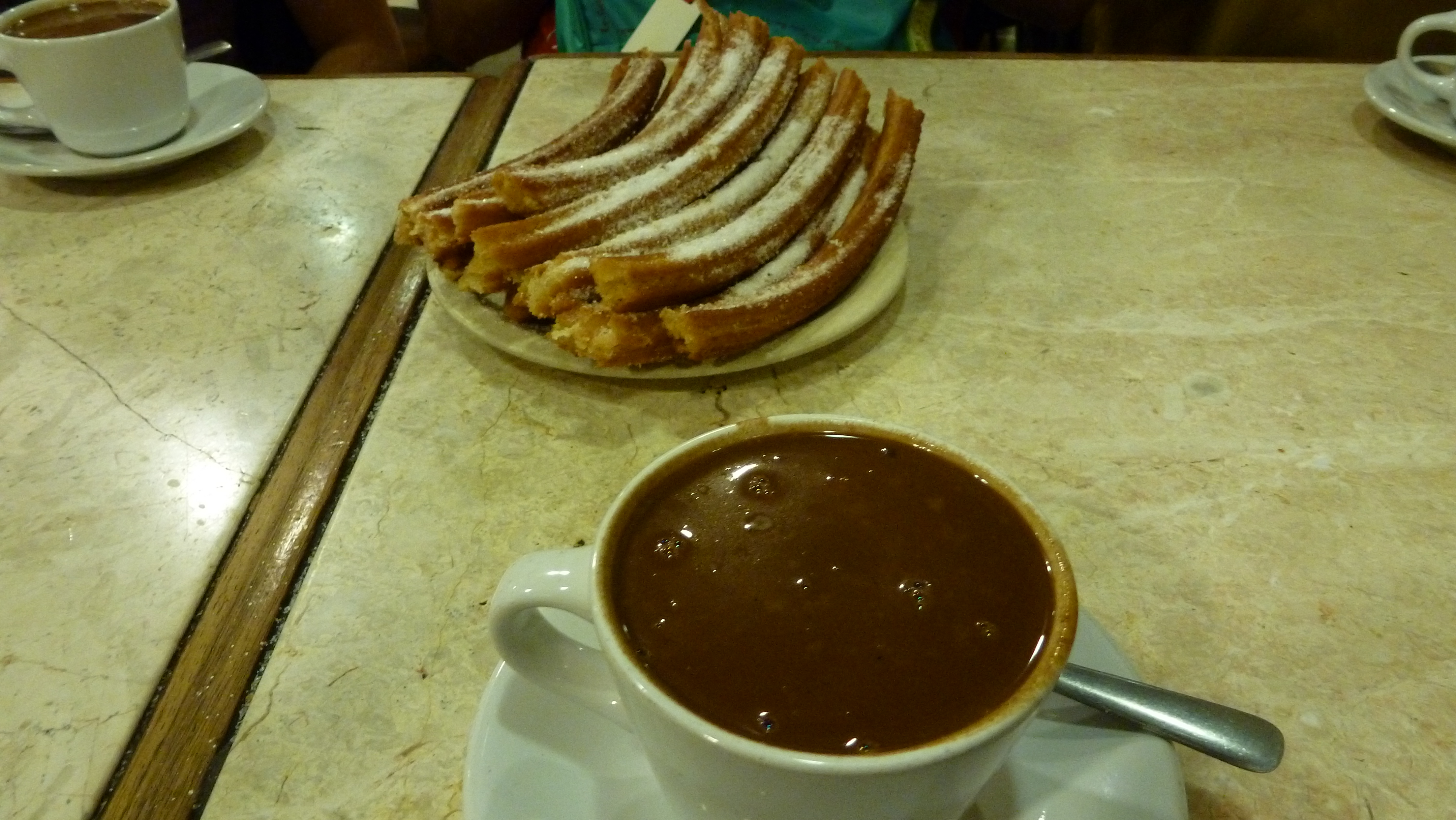 And it’s only a meager 12 days until the beginning of Coynezaa.

Readers are welcome to mark notable events, births, or deaths on this by consulting the December 13 Wikipedia page.

*The Libyan accused of making the bomb that brought down Pan Am flight 103 over Lockerbie, Scotland, killing 270, appeared in federal court today, 34 years after the deed:

The extradition of Abu Agila Mohammad Mas’ud Kheir Al-Marimi is a milestone in the decades-old investigation into the attack that killed 259 people in the air and 11 on the ground.

The Justice Department announced Sunday that Mas’ud had been taken into U.S. custody, two years after it revealed that it had charged him in connection with the explosion. Two other Libyan intelligence officials have been charged in the U.S. for their alleged involvement in the attack, but Mas’ud would be the first defendant to appear in an American courtroom for prosecution.

. . . The announcement of charges against Mas’ud on Dec. 21, 2020, came on the 32nd anniversary of the bombing and in the final days of the tenure of then-Attorney General William Barr. At the time of the announcement, Mas’ud was in Libyan custody. The criminal charges were a career bookend of sorts for Barr, who in his first stint as attorney general in the early 1990s had announced criminal charges against two other Libyan intelligence officials.

. . .A breakthrough in the investigation came when U.S. officials in 2017 received a copy of an interview that Mas’ud, a longtime explosives expert for Libya’s intelligence service, had given to Libyan law enforcement in 2012 after being taken into custody following the collapse of the government of the country’s leader, Col. Moammar Gadhafi.

In that interview, U.S. officials said, Mas’ud admitted building the bomb in the Pan Am attack and working with two other conspirators to carry out the attack. He also said the operation was ordered by Libyan intelligence and that Gadhafi thanked him and other members of the team after the attack, according to an FBI affidavit filed in the case.

The charges? According to the NYT, “Mr. Mas’ud faces two criminal counts, including destruction of an aircraft resulting in death.”

Here’s the accused perp, who is likely to wind up in ADX Florence.

*The title of this NYT op-ed made me click on it: “The root cause of violent crime is not what you think it is.” I was curious to find out what the root cause was, only to be hoaxed by the article (its author is Phillip Atiba Goff, the chair and a professor of African American studies and a professor of psychology at Yale University). Well, half hoaxed. Atiba tells us that the root of violent crime is not lax punishments or not enough cops, but I didn’t think that anyway. He suggests alternative roots, like having mental health professionals respond to some police calls, and guaranteed housing, but never gets to the “root cause”.  Is there one, professor Goff? All he says is the repeated mantra, ““strong communities keeping everyone safe”.  That tells me bupkes.

* I don’t think there’s much doubt that the murder of George Floyd unleashed on America not just the wave of “racial reckoning” that continues but also the tsunami of diversity training and DEI initiatives that is inundating American academia. The relevant question was asked in a Washington Post op-ed “Does diversity training work? We don’t know—and here is why.” The author, Betsy Levy Paluck, is a professor of psychology and public and international affairs, at Princeton University.

So what’s the answer? Why don’t we know. Paluck:

What have we achieved with all this effort? In 2022, this question has special significance, as measures to increase diversity and racial equity have come under political attack, often by people who believe those shouldn’t be goals in the first place. But even among people who believe in the basic mission, common questions about diversity training have shifted from “Which training is best?” to “Is the training even a good idea?” and “Does the training have negative effects?”

The problem is that the real answer to all three of these questions is: We don’t know.

As a behavioral scientist who studies prejudice and behavior change, I can tell you that the situation really is that bad. Last year, my colleagues and I published a comprehensive review of the prejudice reduction literature. We included only program evaluations that used random assignment and control groups, as you would use to check the effectiveness and safety of a drug. Out of hundreds of studies evaluating prejudice reduction programming from the past decade, only two large studies tracked the effects of diversity training.

In sum, we don’t have good evidence for what works. We’re treating a pandemic of discrimination and racial and religious resentment with untested drugs.

The problem is twofold: first, there have been no controlled experiment in which some units are diversity-trained and others aren’t, and then examining the results. Second (and you might have guessed this), most organizations don’t really care about seeing whether DEI training works. It

Diversity training’s uncertain impact is a collective action problem on an enormous scale. The need is obvious: Pay inequities are rampant, companies face constant public relations crises in which non-White clientele are treated badly, and 51 percent of employees who recently quit their job cited a lack of belonging as a central reason. But CEOs don’t want to risk a lawsuit by sharing data, or to find out their training has failed. And diversity trainers selling untested programs might not want to risk negative results from a study.

Collective action problems require collective solutions. Studies that combine multiple corporations and trainings could shelter participants from legal and PR risks. My research team and other behavioral and social scientists are eagerly waiting to help design these kinds of trials. Because if we don’t study what works when it comes to diversity initiatives, we know what will almost surely follow: another crime of hate, followed by a surge in diversity trainings that might not help at all.

So be aware when you’re asked or forced to take DEI training: ask the promoters what evidence they have that it works.

*Yes, you can get booze in Qatar, but it isn’t easy, and if you’re poor, forget it. The NYT reports the hurdles that have to be surmounted to get so much as one beer.

[Taxi driver] Shaj had picked me up along a side street on the southern fringes of Doha, inside the razor-wire-topped walls of the Qatar Distribution Company. The Q.D.C., as it is widely known, is the sole importer and distributor of alcohol in Qatar, a Muslim country where the sale and consumption of booze is heavily regulated. Cocktails, wine and beer are served at a smattering of luxury hotels in the country, but the Q.D.C.’s two branches are the only places that sell alcohol for home consumption.

“It’s probably one of the happiest places in Doha,” said Rachel Morris, who is originally from Australia but has lived in Qatar for 15 years.

. . . For international residents looking for a taste of home, then, the Q.D.C. offers a boozy lifeline. Access to the store is granted through a state-run application process. The privilege was extended in recent weeks to teams, sponsors and news media organizations here for the World Cup. (Fans were not allowed to apply.)

Can you believe it? The players could get beer (or vodka, or anything else), but not the fans! Or the locals:

In the car, Shaj, who is Muslim and from Sri Lanka, told me he had never been inside the Q.D.C. despite living in Qatar for 12 years. The store’s permit requirements include a minimum salary of 3,000 Qatari riyals a month (about $825) to even apply for entry. That puts legal alcohol essentially out of reach for the hundreds of thousands of immigrant laborers who make up nearly 90 percent of Qatar’s population; many of them make close to the minimum wage of $275 a month.

. . . But the U.S. Soccer staff members [they were buying booze like gangbusters] had to be sensible. Each individual permit holder is granted a monthly quota of 2,000 Qatari riyals, roughly $550.

There is, of course, a black market in alcohol, which costs even more than the pricey official stuff (official Bud is $12 a six pack, and home brew that’s called for some reason “Sri Lanka”. Such is life in a Muslim-run theocracy.

*It’s another slow news day, so take the WaPo‘s newquiz, “Are you fluent in Gen-Z office speak?” Generation Z, as you may know, comprises Americans born between 1997 and 2012. They’d thus be between 10 and 25 years old, and clearly those at the lower end of that range wouldn’t have “officespeak”. But the quiz is based on the way the “kids” communicate with text messages.

There are six questions and four answers to choose for each. When you click on one, it tells you whether you’re right or wrong, and what the real answer is and what it means. Here’s one question and the choices: 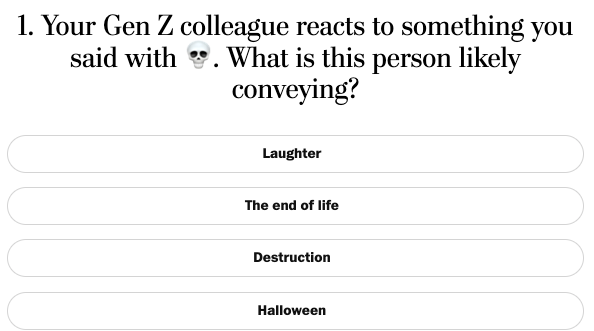 I missed that one, but got 3 out of the six questions correct. Given that I was mostly guessing, that’s not too bad. Go take the quiz—you know you want to!

Meanwhile in Dobrzyn, Paulina does take a fine picture of Hili:

Hili: This should be a fine picture.
Paulina: I hope so.
(Photo: Paulina) 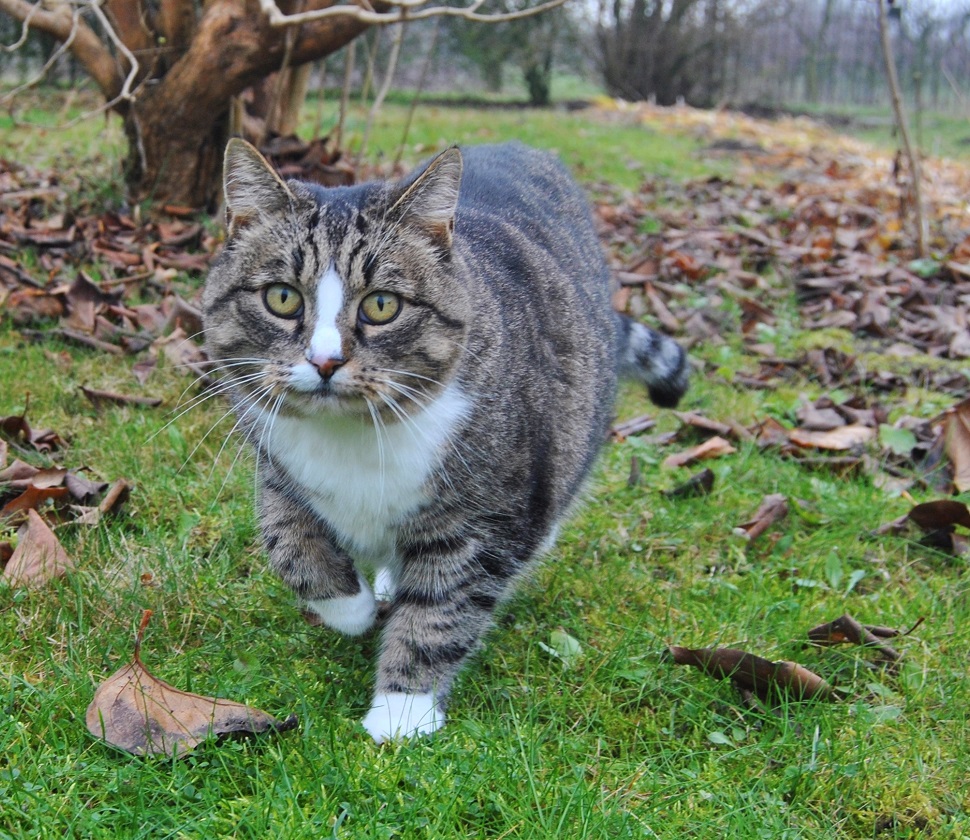 From Anna: (I’ll add that Santa is “Jolly at Any Weight” 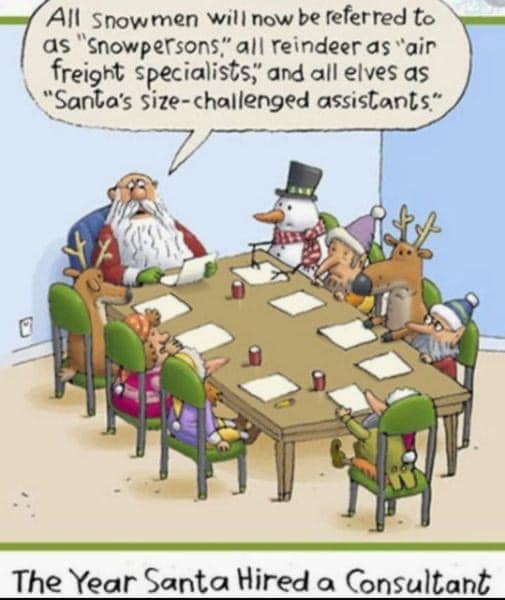 From Angela. This is true! 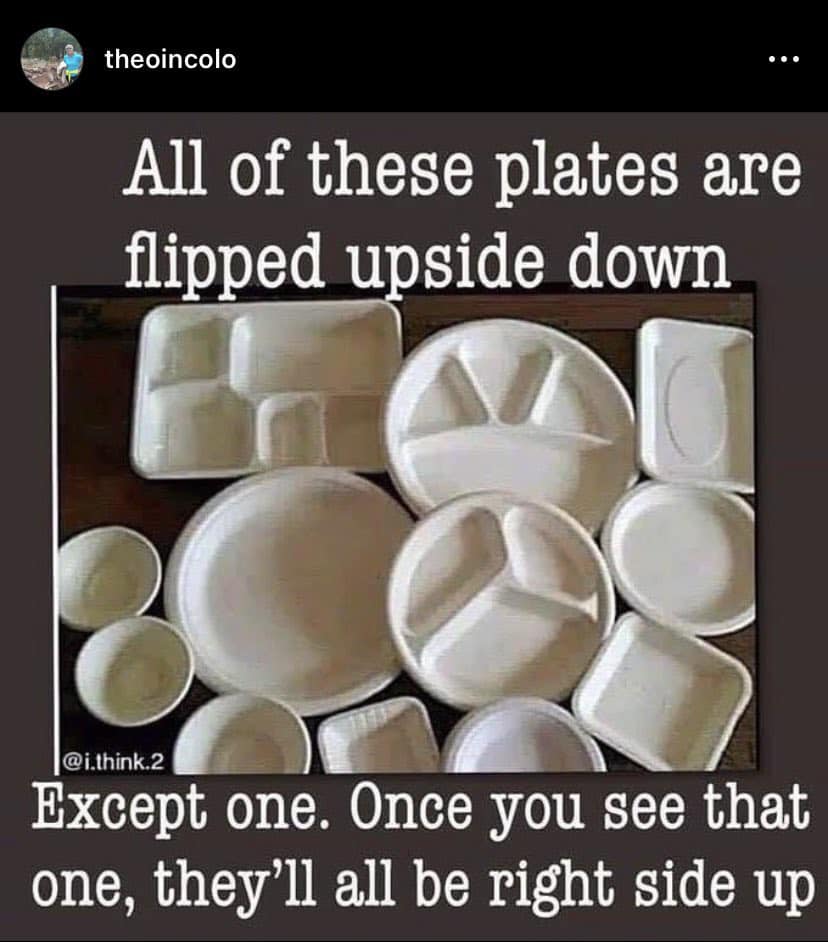 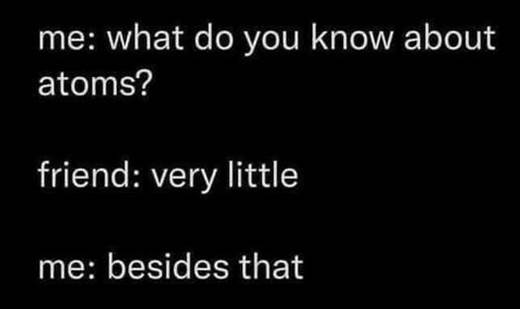 God makes a “toot” (that’s what they call them) on Mastodon:

From Masih: “shamed” women without hijabs fight back in Iran:

Iranian women resist morality police & kick out the harassers off the bus in Tehran.
The woman who send this videy says; we remove our hijab everyday and no longer accept bullies from morality police.
We will end this gender apartheid regime.#MahsaAmini
pic.twitter.com/ek54Y8KpEe

From Malcolm. But there’s no control:the guy popping out from the blanket without a mask!

We thanks the committee for their comments pic.twitter.com/ShmR7nfVIB

Simon’s new kittens (no names yet, so go ahead and suggest some!). Simon says that the kittens came from C.A.R.E., a no-kill shelter on Chicago’s North Shore. 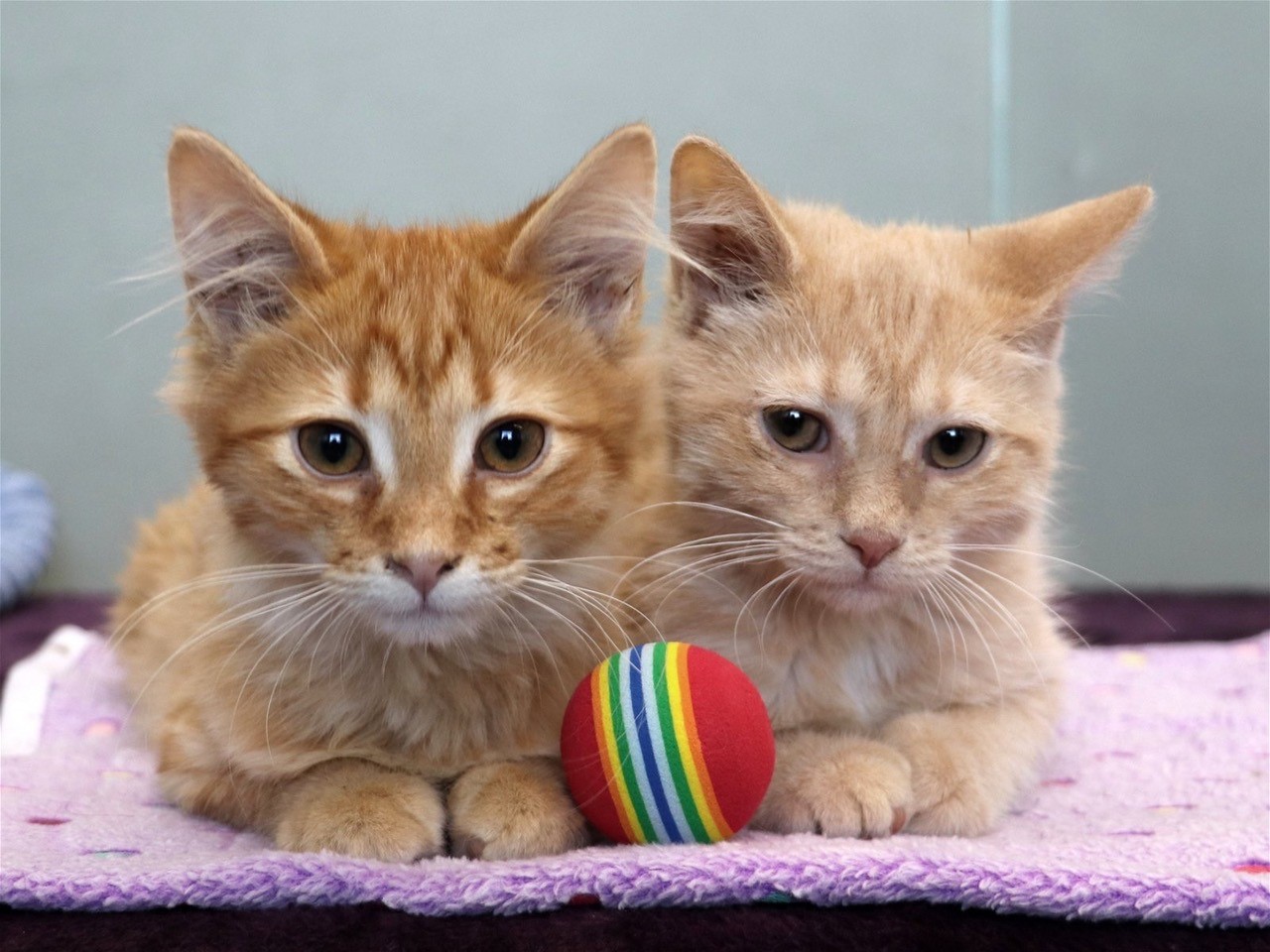 From the Auschwitz Memorial, yet another Dutch person sent to the camps:

In November 1942 she was deported to #Auschwitz. She did not survive. pic.twitter.com/nw9qXzv31D

Tweets from Matthew. The first one really is my nightmare:

Man finds thousands of scorpions in an abandoned house pic.twitter.com/Pv5DqxbFiu

Here's one for you @ChrisGPackham 🙂
Just took this video in my garden, North London. Two beautiful foxes having fun in the snow. pic.twitter.com/G6imEymxa8

Remembrance of hats past:

These bright woolen hats in @rijksmuseum were found on the skeletons of Arctic whalers from the 1600s. Given that they would have dressed bundled up against the cold, jaunty coloured hats helped them recognise who was who. They wore them to their graves. #MuseumNerdsAbroad pic.twitter.com/CGyFSRjqdi

I don’t know what kind of duck this is, but the Japanese translates as “Mysterious cry”: