I was pleased to get two lists of great movies (I’m a sucker for lists of great art) from Justin Remes, associate professor of film studies at Iowa State University (he also wrote Absence in Cinema: The Art of Showing Nothing). I’ll quote his email with permission:

I know you occasionally post about cinema, so I thought you might be interested to know that the highly respected Sight and Sound poll of The Greatest Films of All Time (which is only published every ten years) was just released today. You can find the critics’ poll here and the filmmakers’ poll here. For what it’s worth, my personal pick for the greatest film of all time is 2001: A Space Odyssey, so I was happy to see that at the top of the directors’ poll. As for Jeanne Dielman, which is at the top of the critics’ poll, I think it’s a great film, although it wouldn’t make my own personal top 10. It was a shock to see it there, however–I really don’t think anyone could have predicted it would come in at number 1. (In the last Sight and Sound poll, it was 36!)

I’ll give the top ten in each of the two polls. First, the top ten in the CRITICS’ POLL, with the best put first (remember, there are 100 movies in each poll). Click on each screenshot to go to the site describing the movie. At the bottom I’ve put a link to my own list of best films, posted here twelve years ago.

I haven’t even heard of this Best Film! 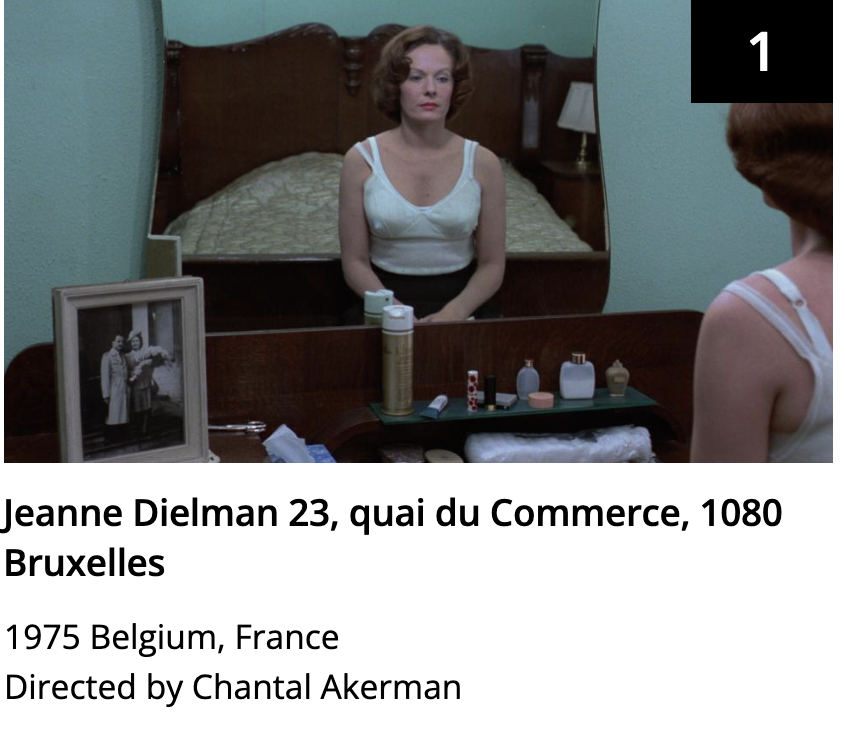 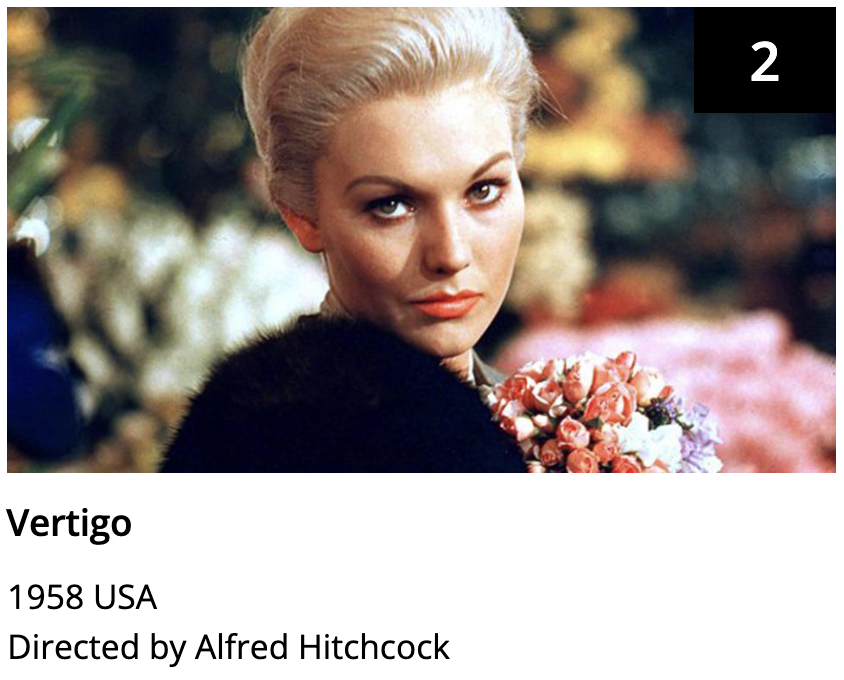 A great film, better than “Vertigo”: 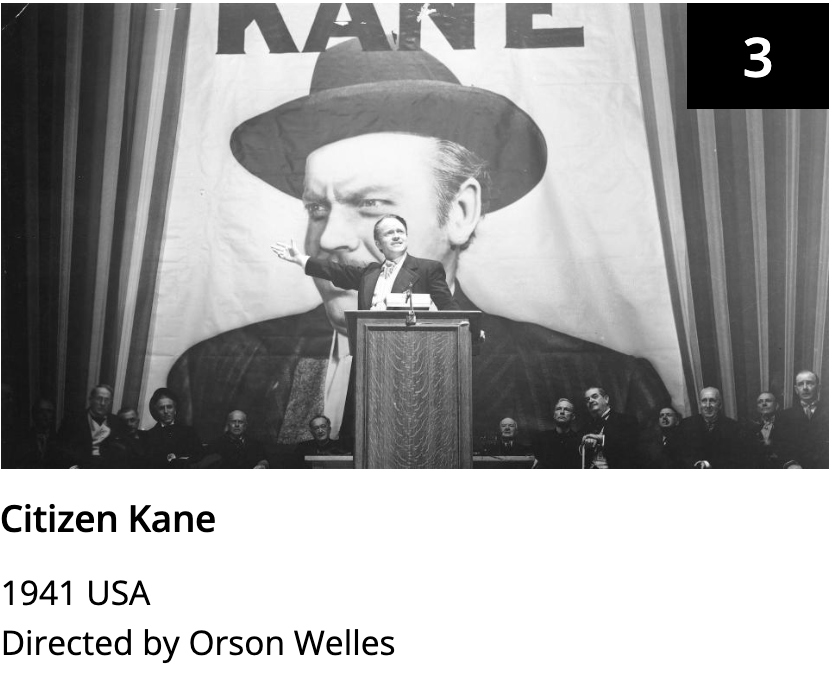 This and Kurusawa’s “Ikiru” are my favorite foreign films. And Ikiru isn’t even on the list!  See both of them! 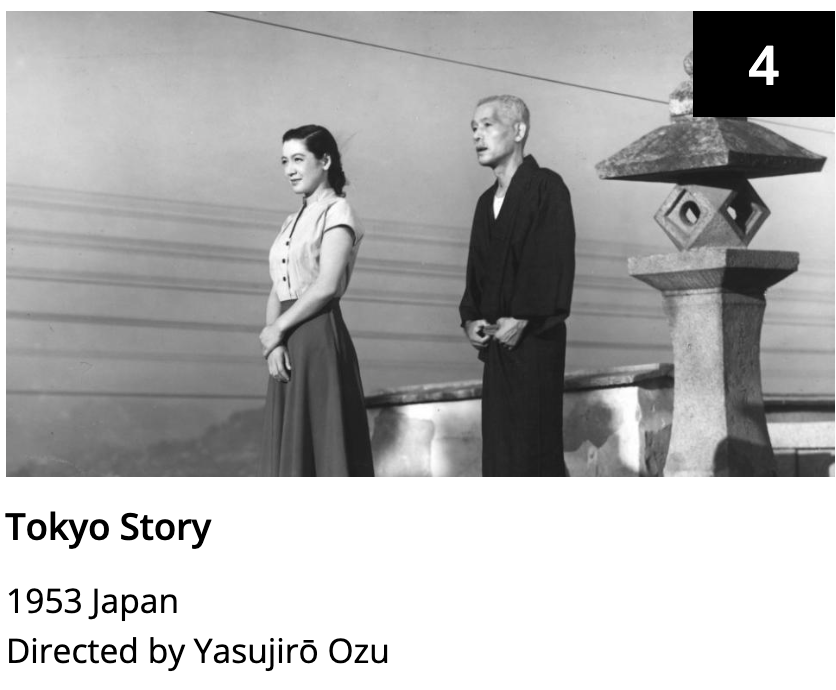 Just okay, but that’s it: 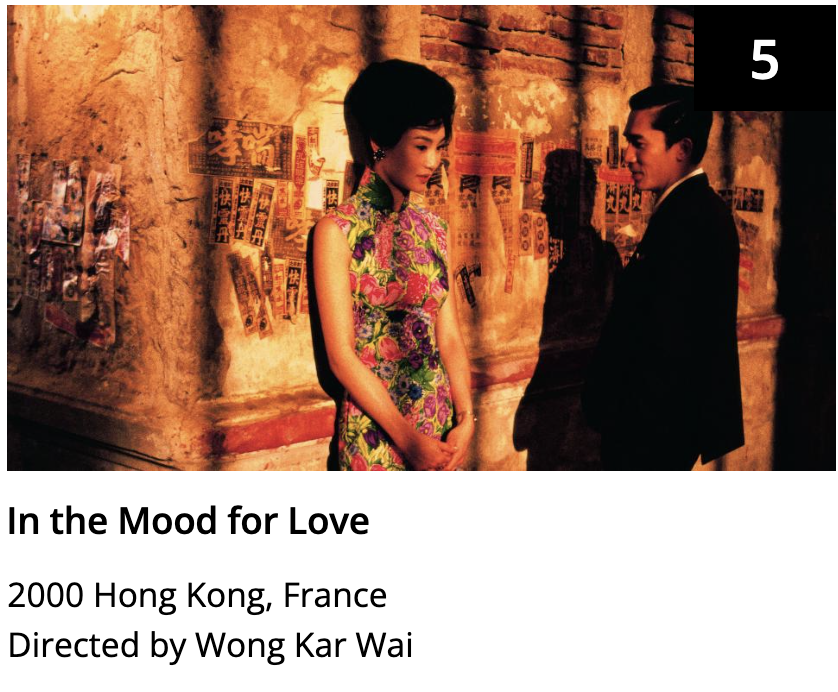 I am ashamed to admit that I’ve never seen this film—Justin’s favorite: 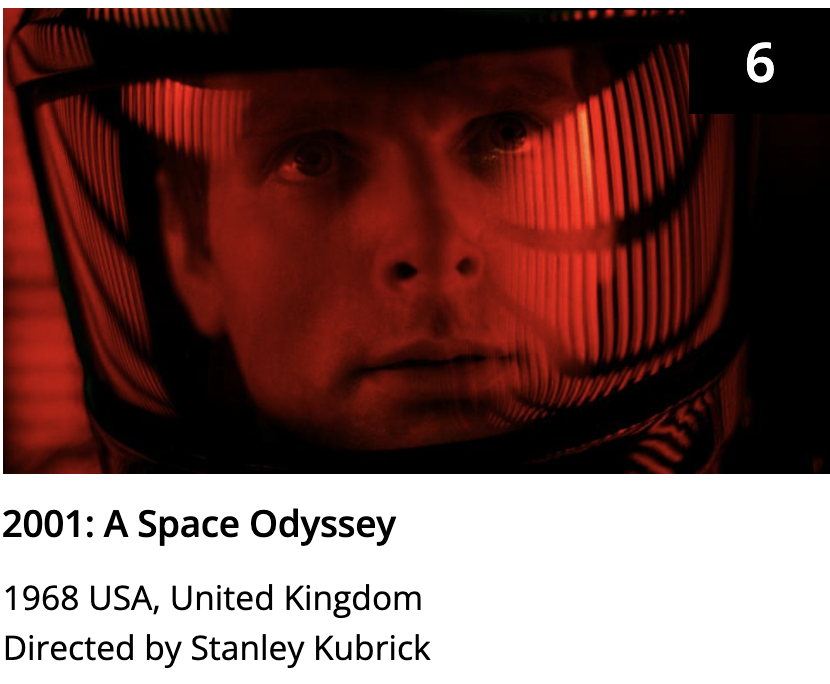 Haven’t seen this one, but I should: 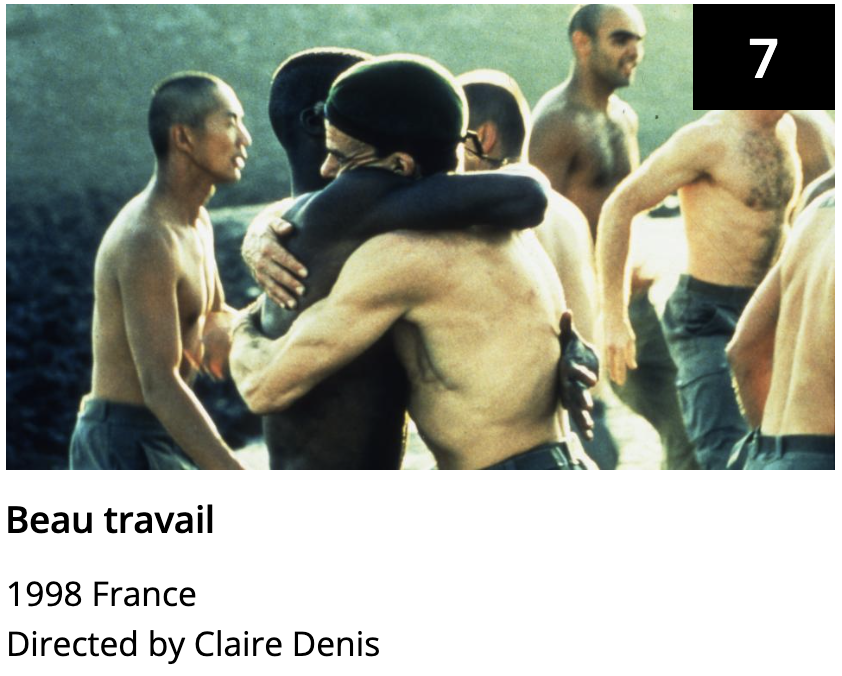 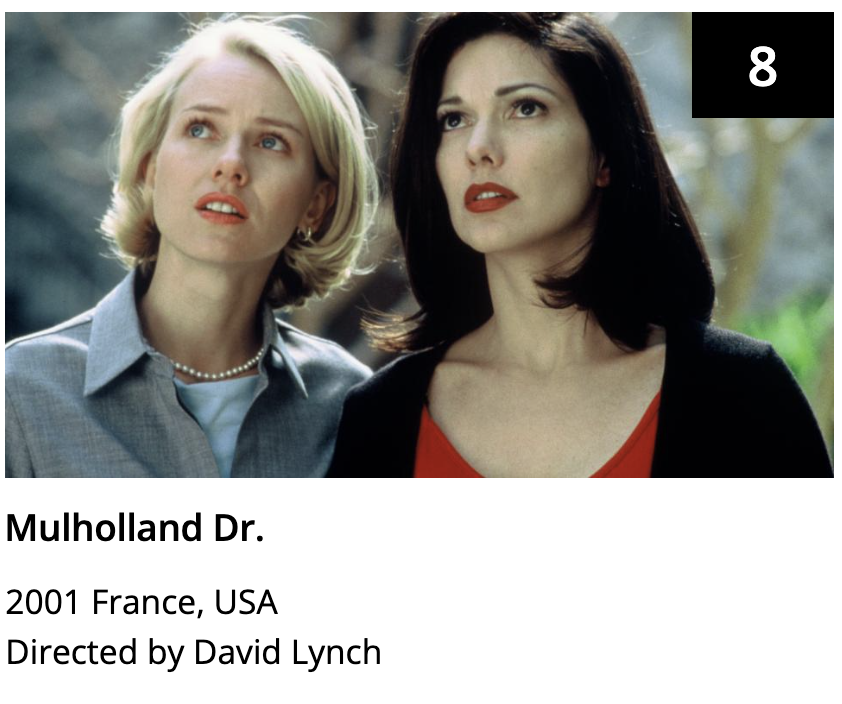 Haven’t seen this one (I’m getting ashamed): 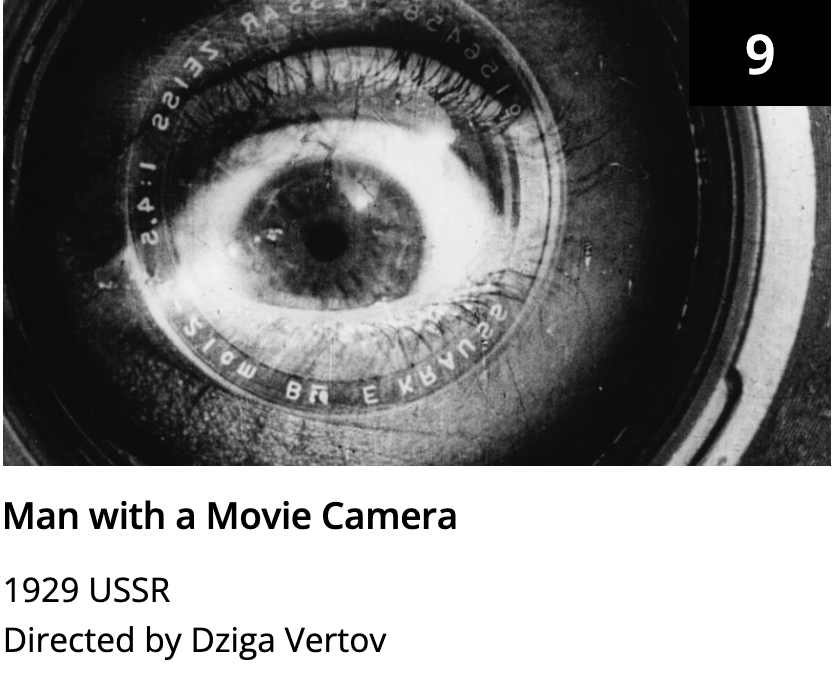 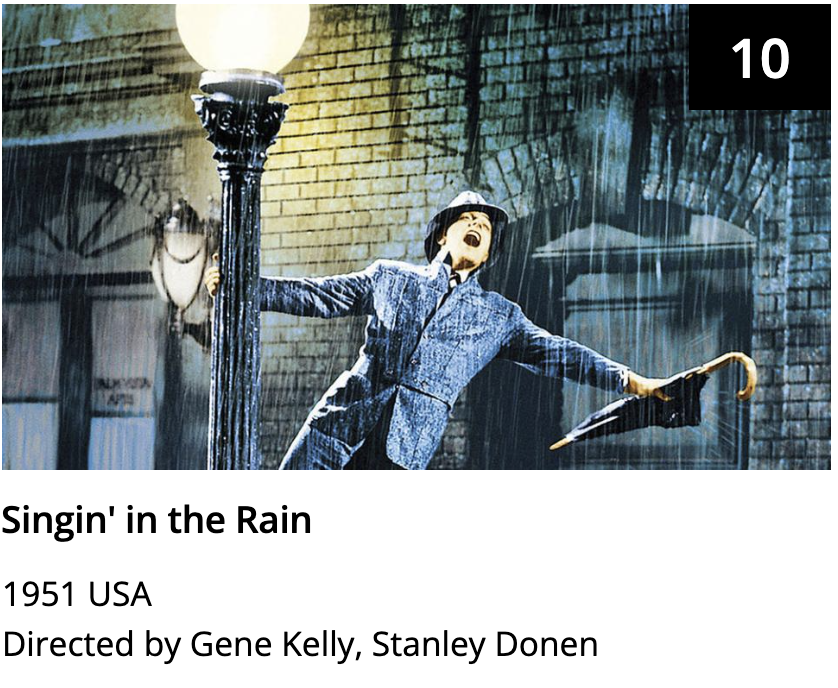 Second, the top ten in the DIRECTORS’  (FILMMAKERS) POLL, with the best put first. There’s a fair amount of overlap with the previous list.

Maybe I should see this film! 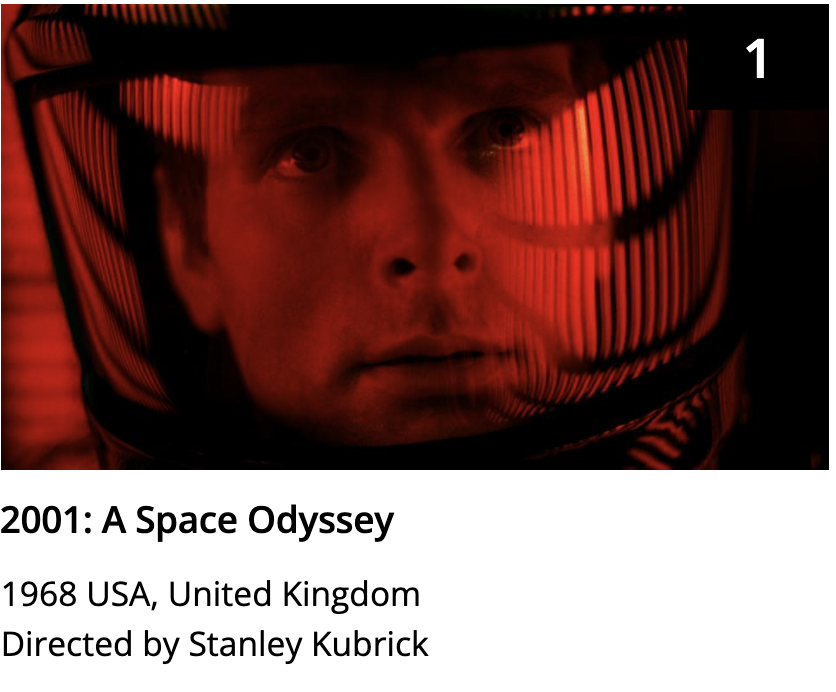 “Citizen Kane” is at the top of every “greatest movies” list, as it should be. 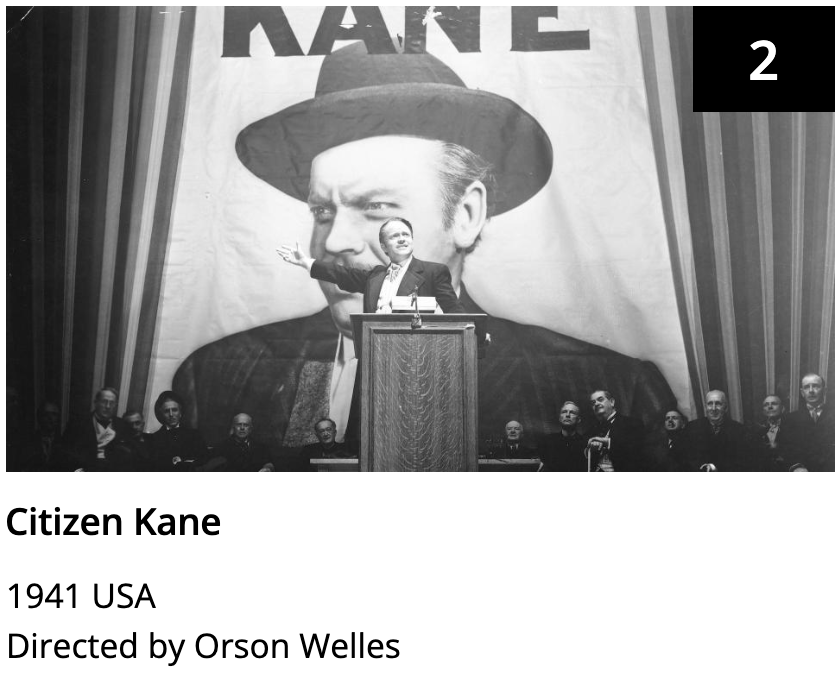 This is a very great film. Aren’t we lucky to have seen it as a first run (well, those of us who are older)? 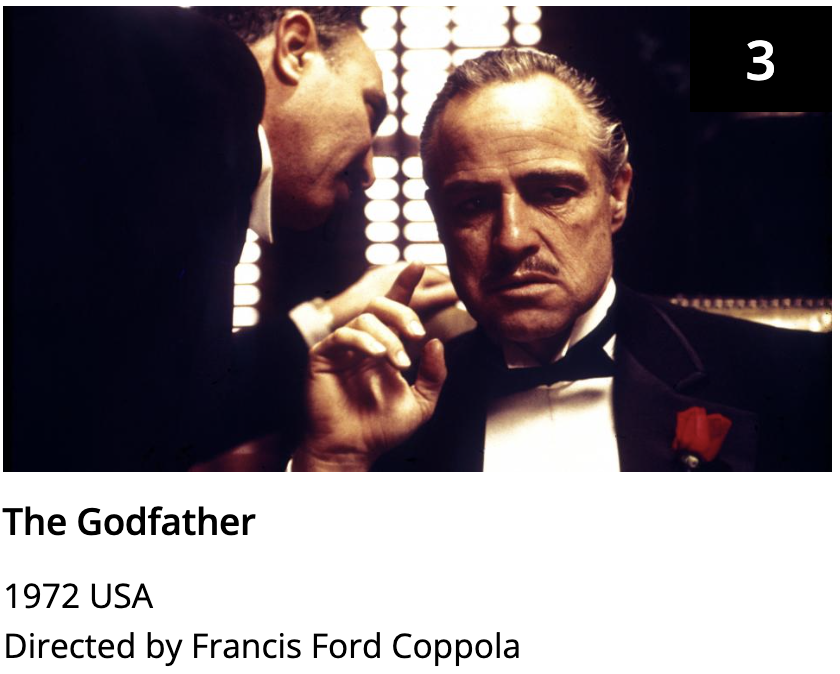 A reminder to see this movie. If you are the action-movie type, you may not like it: it’s a family drama and slow paced. I love it very much. 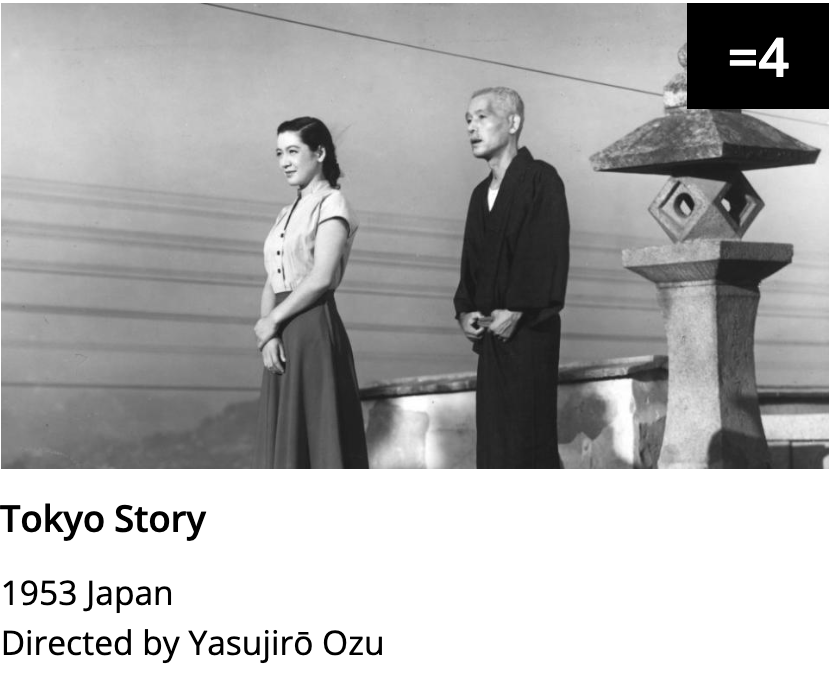 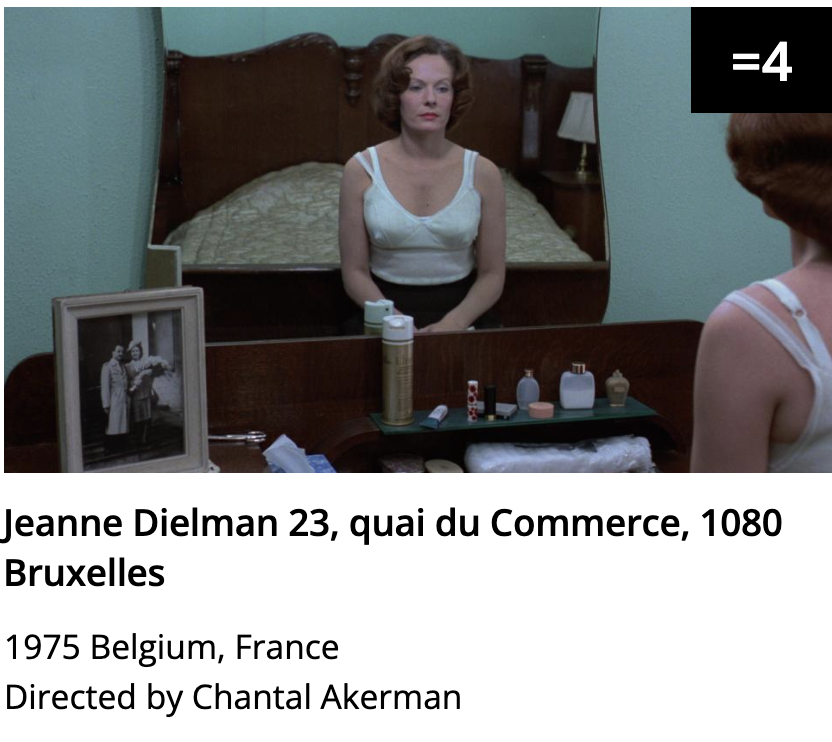 These next two are tied, and I wouldn’t put them in my top ten. 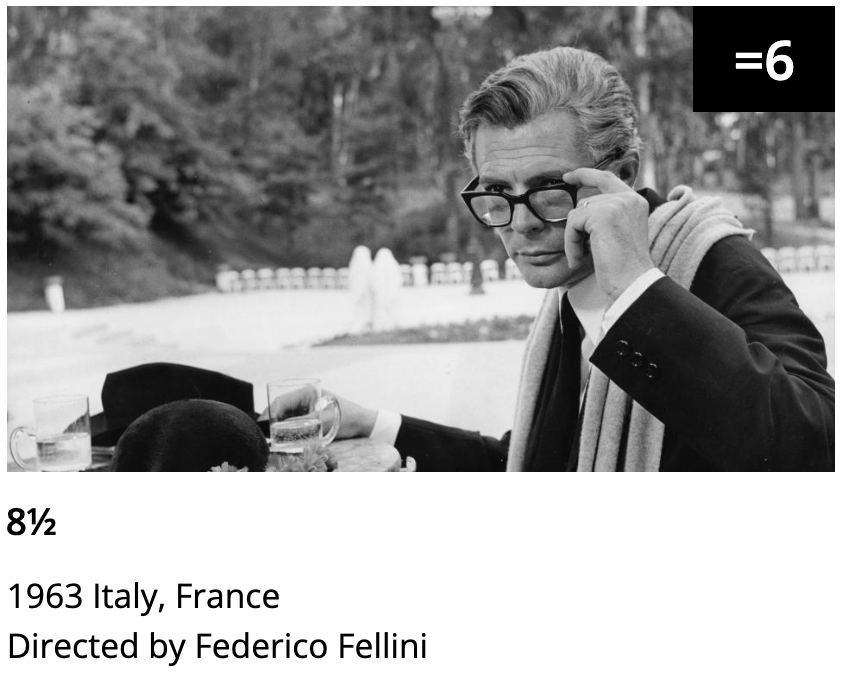 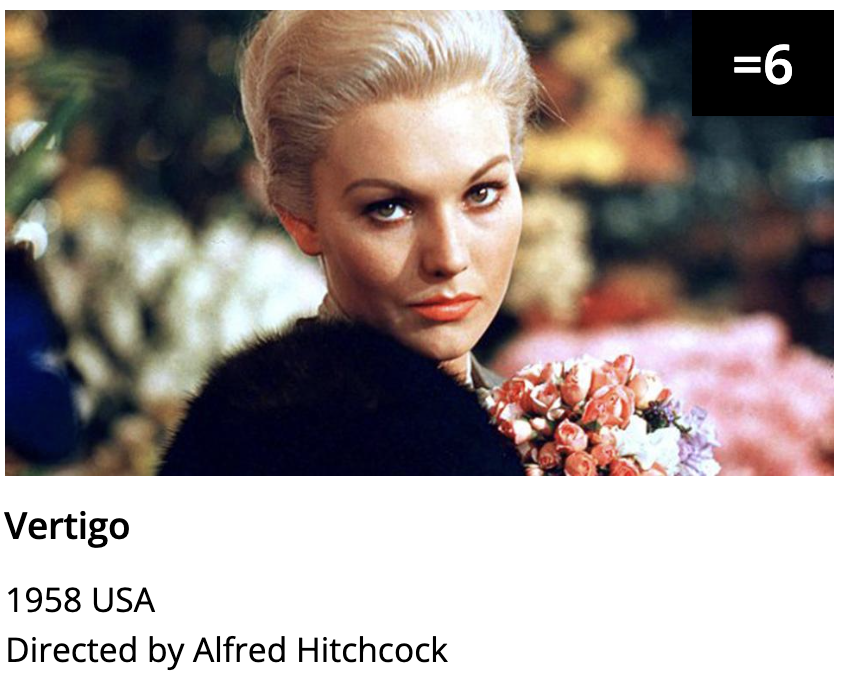 There is no #7 because of the ties. I haven’t seen this one: 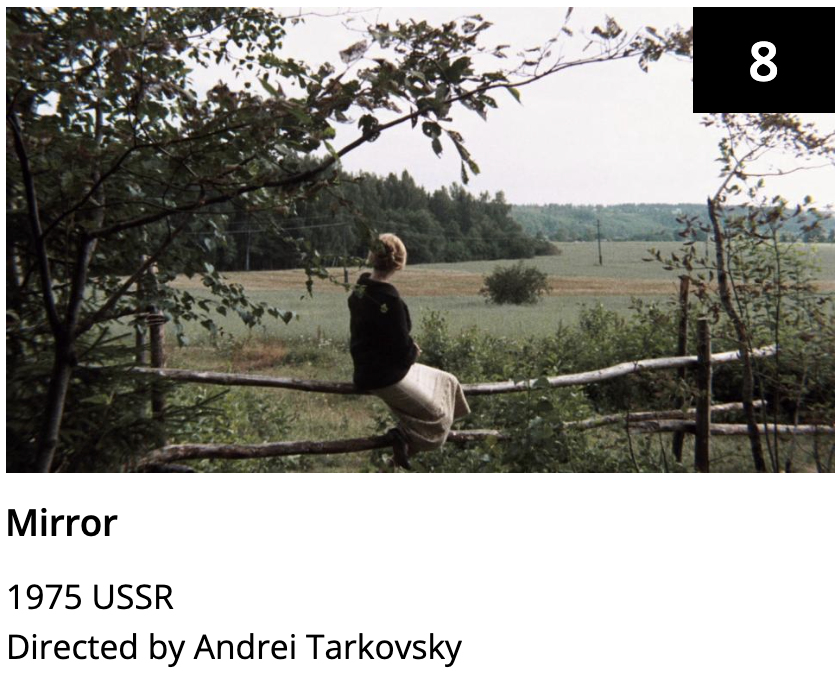 These next three are tied for the #9 slot. None of them would be on my list, and I’m not a Bergman fan at all: 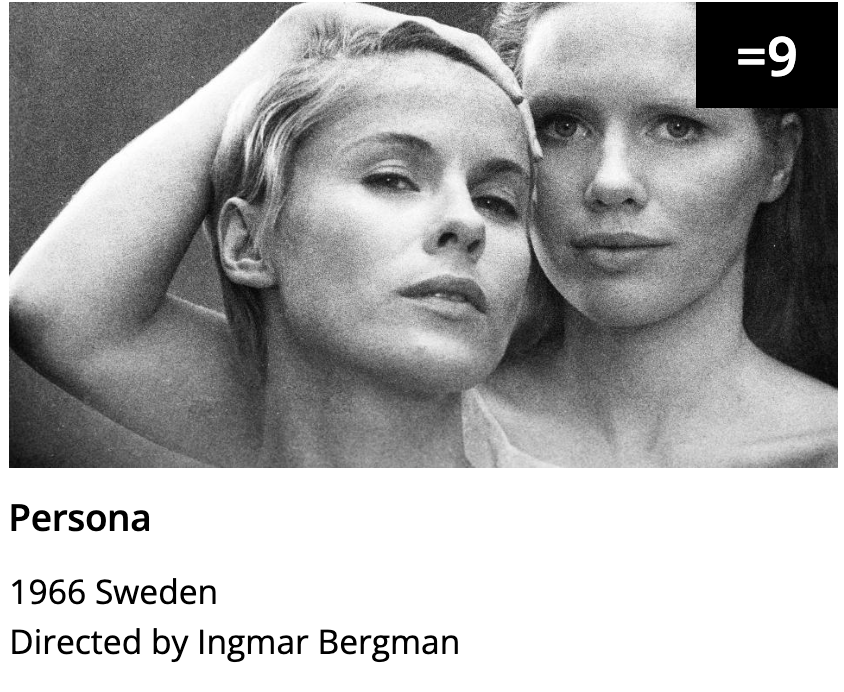 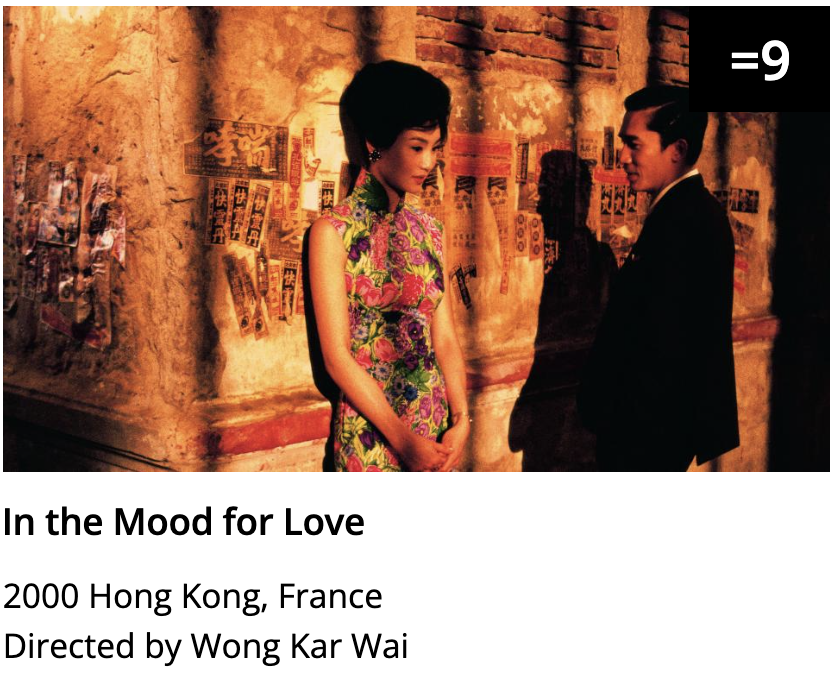 Gotta see this one, too, as I haven’t: 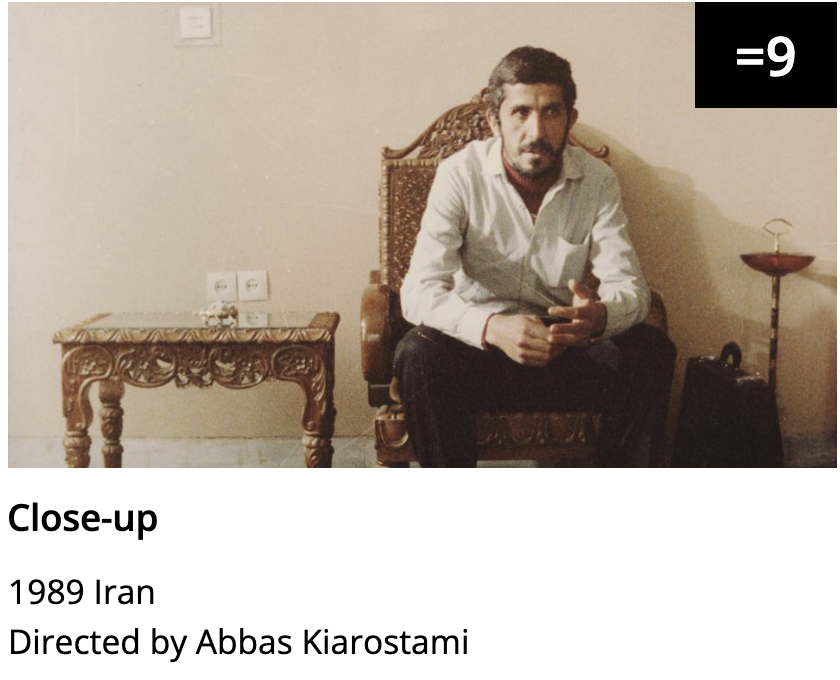 At least “Ikiru” makes it on this list, though only at #72: tied with “Chinatown” (a superb film) and “The Seventh Seal”, another Bergman film.

Now I posted my own list of “Best Movies” back in 2010, and it hasn’t changed, though perhaps I’d add 2019’s “Portrait of a Lady on Fire” to it. (I left “Citizen Kane” off my list because it’s everybody’s choice.)  The one movie missing from both of the lists above is my favorite American movie, “The Last Picture Show” (1971).  The omission is shameful!

Now it’s your turn, as always. Post the list of your “best movies”, preferably the top five. After all, it’s a great way for all of us to find new things to watch.

117 thoughts on “The greatest films of all time: a critics’ poll and a filmmakers’ poll”