Reader Cora sent me an archived link to this paper from the Times of London, which you can read by clicking on the screenshot below.

The skinny is that the Oxford Union, the group that officially represents students at the University, has one president and five vice-presidents. One of the latter was a “dedicated woman’s officer”, devoted to promoting an protecting women’s issues at the University. But as we know, the word “woman” has taken on a new meaning, including transsexual women, and that got the woman’s officer, Ellie Greaves, into trouble. Click to read: 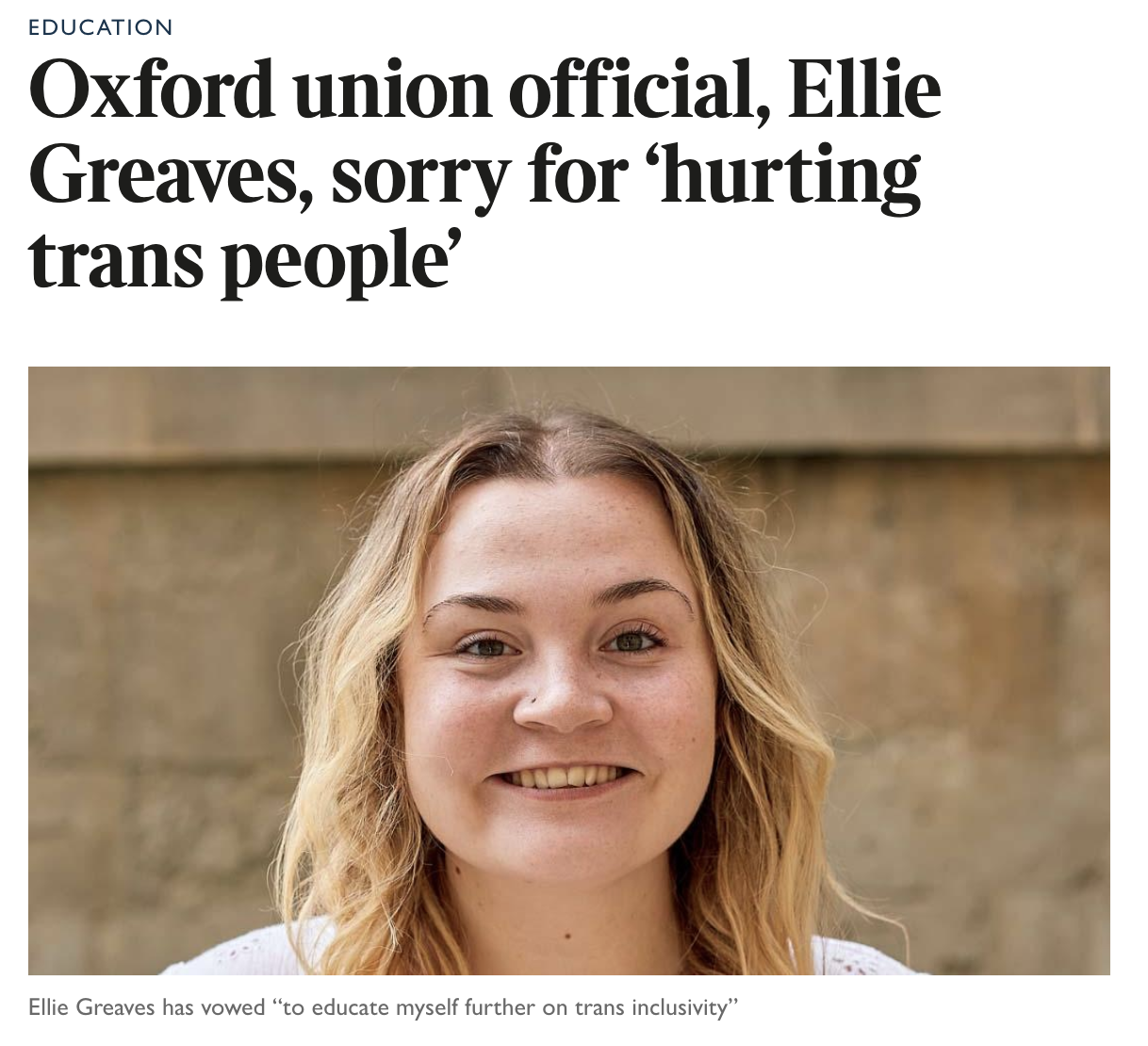 Because transsexual women are considered by activists to be identical in every respect to biological women, including their issues and concerns, they had to change the name and the mission of the position. But Greaves had defended her position’s original mission, which espoused some concerns of biological women but not transsexual women. For defending that notion, she got huge backlash, the position was changed, and Greaves issued about as embarrassing a statement of contrition as you can imagine. Excerpts:

Greaves is a point of contact for students with issues relating to women’s health, sexual consent and night-time safety. She said last month: “I really hope the issues I’ve been talking about this year don’t fall into the background. I think there’s a risk that the removal of [the post] will send the message that ‘sexism is solved’, when it really isn’t.

“We’re not where we need to be in terms of women’s representation and I think there’s a risk of moves to tackle sexual violence being left behind. There’s a reason the role has been around for so long. I will continue to prioritise women.”

Sharon Udott, president of the Oxford Feminist Society, said: “It’s incredibly important to have a women-focused role in 2022. To say that it is redundant in this day and age is an incredibly privileged position to hold. From violence against women to advocating for increased support and funding for women’s health, these issues don’t change when the year does.”

Greaves also told the student newspaper Cherwell that “provision for conditions such as endometriosis and polycystic ovary syndrome are not accommodated in the way I would like to see”.

Well, you can’t go saying things like that, especially about biological-woman-limited medical conditions. And so the mob went into action, the position’s name was changed, and Oggsford (Gatsby’s term for the University) gave the “inclusion” reason:

Students took issue with some of her comments, The Oxford Student website said on Tuesday. She was asked at a student council meeting last week: “What do you have to say to the hundreds of students who were consulted regarding [the role review] . . . who agreed that this would be a good change for inclusivity, equality and the priority of intersectionality?”

Intersectionality is the theory that various forms of discrimination centred on race, gender, class, disability, sexuality, and other identities, do not work independently but interact to produce particularised forms of social oppression.

Thanks for the explanation, Times! goes on:

The union is replacing its women’s officer with a liberation and equalities representative from next year. The reorganisation of union leadership will keep the same number of roles — one president and five vice-presidents — but female students will lose a dedicated women’s officer. The union said this was because the role was created at a time when women could not get full degrees and colleges were segregated, and that the position prioritised one protected group over others.

Oxford Student Union said of changes to the women’s officer position: “The role has not been replaced but augmented to include more underrepresented and marginalised communities who currently do not have sufficient representation.”

Well, maybe, but the real reason is one we all know. And the new officer is going to have his/her hands full enforcing social justice as a whole: it’s a “liberation and equalities representative”.

And even if the position is redundant now (I’ll let the women be the judge of that), the worst part is Greaves’s abject and cringe-making apology. It’s like the Cultural Revolution in China, when those who transgressed accepted dogma had to wear signs around their necks and don paper hats shaped like cones. (Some were beaten and even killed, too.)

THE APOLOGY, with an explanatory note by the Times:

Greaves issued a statement on Tuesday, saying: “The comments I made in the article contribute to a bio-essentialist, narrow-minded narrative of what being a woman is, including the prioritisation of women over minorities. I cannot apologise enough for the damage and hurt I have caused the trans community.”

Bio-essentialism is the philosophy that biology plays a larger role in determining human psychology or development than social, economic, or environmental factors.

“My knowledge of the trans experience is very limited at the moment, and I will endeavour to educate myself further on trans inclusivity through more open engagement with LGBTQ+ Campaign and personal research,” she said.

Note the criticism of “bioessentialism”, which makes an unsupported claim. It’s not true that for all aspects of human development or psychology, social/economic/environmental factors play a larger role than do biological ones. It depends on which aspect of development you’re talking about. For example, biology plays nearly the entire role of determining whether you’re a male or female in the first place, and that affects secondary sexual traits like genitals, body hair, and vocal pitch.

But forget that. What’s reprehensible here is the way Greaves bowed and truckled to the trans activists with her statement about her ignorance and determination to “educate herself.” And I doubt that she really caused a lot of “damage and hurt” to the trans community. They will of course claim that, but what she said above could damage or hurt only those so easily triggered that they may need professional help. The dignified thing for her to have done was either resign the position, or accept it, do what the new position requires, and move on. As we all know, apologies like Greaves’s never work—they just further inflame the extreme progressives.