Sean Carroll, bless his physicist’s soul, decided to respond to a tweet by Colin Wright (asserting the binary nature of sex) by giving his (Carroll’s) own take in on the biological nature of sex. Sean attached a figure from an old Scientific American article assertingthat sex is not binary, but a spectrum. Here’s the first to-and-fro:

The figure, enlarged (click further to make it even bigger): 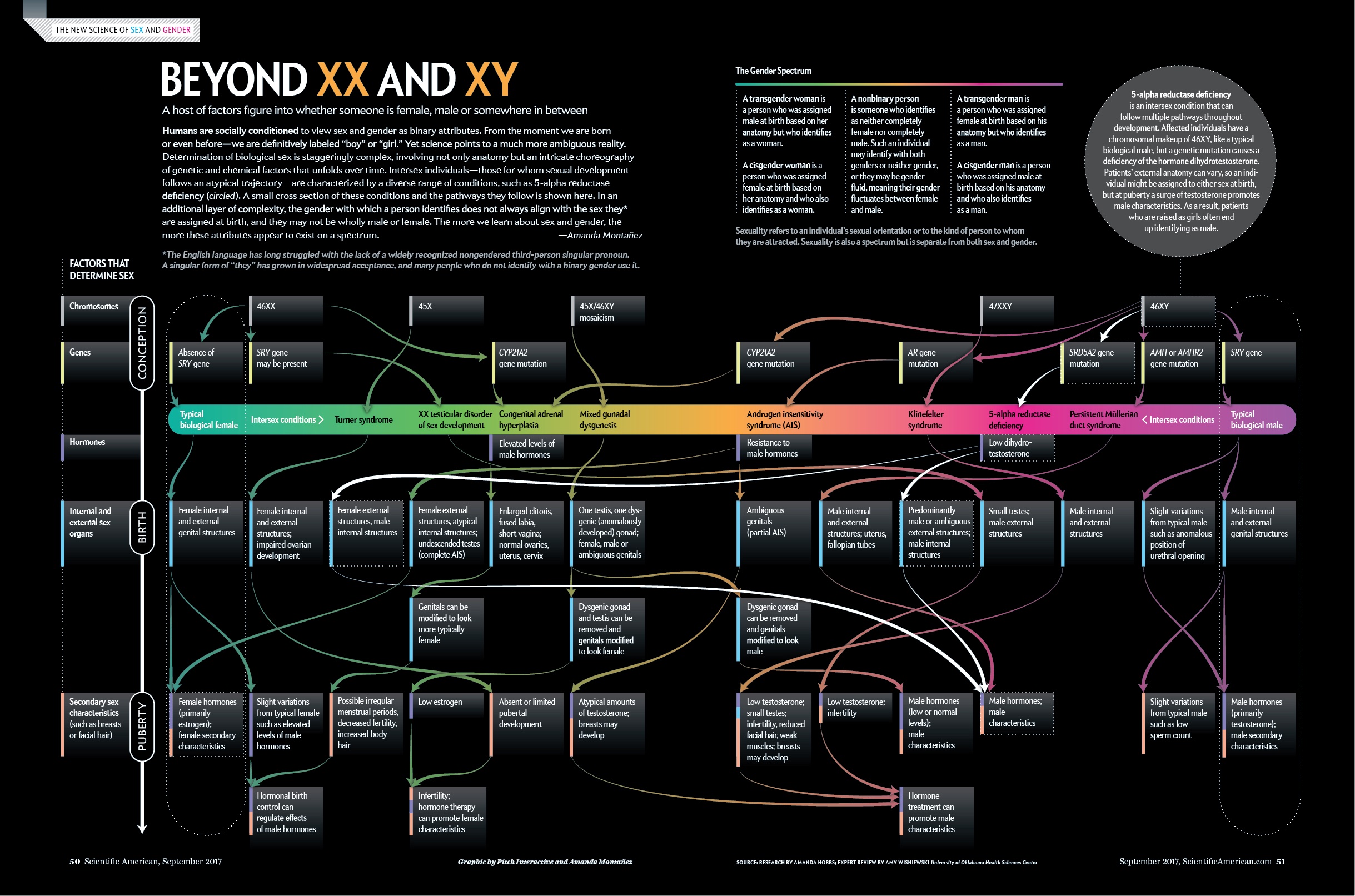 This figure came from a Scientific American article published in 2017 by Amanda Montañez, called “Visualizing sex as a spectrum” (free access).  The article clearly implies that, like gender, sex is not binary but a spectrum:

Much of the public discourse in this arena centers on gender rather than sex, presumably because gender is understood to be somewhat subjective; it is a social construct that can be complex, fluid, multifaceted. Biological sex, on the other hand, appears to leave less room for debate. You either have two X chromosomes or an X and a Y; ovaries or testes; a vagina or a penis. Regardless of how an individual ends up identifying, they are assigned to one sex or the other at birth based on these binary sets of characteristics.

But of course, sex is not that simple either.

The September issue of Scientific American explores the fascinating and evolving science of sex and gender. One of the graphics I had the pleasure of working on breaks down the idea of biological sex as a non-binary attribute, focusing largely on what clinicians refer to as disorders of sex development (DSD), also known as intersex.

This figure clearly has an ideological purpose:

DSDs—which, broadly defined, may affect about one percent of the population—represent a robust, evidence-based argument to reject rigid assignations of sex and gender. Certain recent developments, such as the Swedish adoption of a gender-neutral singular pronoun, and the growing call to stop medically unnecessary surgeries on intersex babies, indicate a shift in the right direction. I am hopeful that raising public awareness of intersex, along with transgender and non-binary identities, will help align policies more closely with scientific reality, and by extension, social justice.

In reality, what they are trying to do is the reverse: adjust scientific reality so that it aligns with social justice. That is, if sex is a spectrum and not binary, then people of different genders can somehow feel that they are in harmony with biological reality. But that’s an example of the “appeal to nature.” The rights of people of different genders, including transsexual people, do not depend on the developmental biology of sex, or of any observations in nature about sex dichotomies.

I’m not going to discuss my claim that sex is binary; I’ve talked about it at length, as did Luana Maroja in her piece at Substack. I’ll just put it out there that the going biological definition of sex is that there are two sexes in vertebrates: males (who produce small mobile gametes) and females (who produce large, immobile gametes). There is no group that produces intermediate types of gametes that can unite with other gametes, so there is nothing beyond these two sexes. Further the exceptions to this male/female distinction (intersex folks and hermaphroites) constitute about 0.018% of the population. or about one in every 5600 people. For all intents and purposes, then, sex is binary.  Gender, in contrast, is less binary but still bimodal, since most people identify their gender (i.e., how the present their social sex role) as male or female, too.

Carroll, however, got into trouble by issuing the tweet above, which, as his caption noted, purported to represent the views of “actual science”. In reality, it represented the “progressive” ideological views of Scientific American. In light of the magazine’s steep decline, we can no longer take its word for what accepted science tells us.

If you follow the thread on Sean’s tweet, there are of this morning 737 comments—most of them critical and many explaining why Carroll’s notion that he’s showing us “actual science” leading to a non-binary view of sex is wrong.  I didn’t go through them all, but posted a few in yesterday’s Hili Nooz.

(One note: I didn’t know that Sean had left Caltech, but this is pinned to the top of his feed):

Postdoc job at Johns Hopkins in physics/philosophy! Research areas include the foundations of quantum mechanics, spacetime, the evolution of complexity, the arrow of time, causality and emergence, and related questions.https://t.co/JF2pM1vpAS

What the Sci. Am. figure actually shows is that the pathways determining sex-related traits (note that “gametes” are not shown!) is complicated, and if your definition of “sex” includes secondary sex characters, chromosomes, and so on, then lots of things can go wrong, producing intersex individuals. Still, only one individual out of 5600 represents one of these developmental anomalies.

I responded, and I swear that this is by far the most comments (195), retweets (1,529), and “likes” (8,258), I’ve ever gotten on any of my tweets. But it’s best not to feel good about that, because it only makes you want to get more approbation on Twitter, which is not a good reason for tweeting.

"Actual science" done by biologists shows 2 sexes, one with small mobile gametes and the other with large, immobile ones. There is no third sex. Disorders of sex development are not new sexes, and biological sex is binary. Let's not conflate sex, gender & developmental anomalies. https://t.co/tANXZM5S0r

But the point of this is not to bash Sean, whom I like and who is our Official Website Physicist®, but to correct what he said. I hope he addresses the critics and hope even more that he admits that biological sex consists of two distinct groups with very few exceptions.

Stephen Knight, once known as the “Godless Spellchecker,” has a piece about the kerfuffle on his Substack site. You can read it for free by clicking on the screenshot below, but, as always, subscribe if you read often.

Stephen gives a tweet from Colin Wright, who’s written a lot about the binary nature of biological sex (see this post, for instance), and then gives his (Stephen’s) own take:

Below are excerpt’s from Knight’s piece. He’s pretty hard on Sean in a way I wouldn’t be, because Carroll is a nice guy and just made a misstep. But I’ll quote Knight anyway:

Colin Wright is an evolutionary biologist stating an objective fact about the biological reality of human sex. This isn’t a mere opinion—it’s a scientific fact. There are few things in the field of biology that are so emphatically true as human sex being binary is.

If anyone were able to demonstrate that human sex wasn’t binary and immutable, their research would win them a Nobel prize and revolutionise our entire understanding of biology. But no such peer-reviewed research exists—for obvious reasons.

This doesn’t stop people that really should know better from from wading in with this sort of stuff though.

Sean seems to arrogantly think he has the ‘actual science’ on his side when rejecting the binary nature of human sex. But in reality, all Sean is doing with this borrowed graphic is using the existence of intersex conditions as a jumping off point for some faulty conclusions.

The existence of intersex conditions or DSDs (difference in sex development) appears to be the graphic’s sole argument against the gender binary. However, although intersex people do exist (as a tiny minority ) they do not constitute a third or separate human sex. In fact, certain intersex conditions are entirely sex-specific—meaning some of them only affect men, and some of them only affect women. And the idea that someone with a ‘micropenis’ or an abnormally large clitoris is no longer unambiguously male or female is as false as it is harmful.

Development Biologist Emma Hilton highlights the peculiar claims within the graphic when she notes:

Another from Emma. (“DSD” refers to “disorders of sex development”):

Why does the chart map males with high testosterone who don’t have a DSD (although they may have other medical issues) to a pathway that says they have normal ovaries/uterus/etc and might suffer irregular periods.

Sean doesn’t appear to have replied to Emma’s (or anybody else’s questions).

Here’s Knight in a 9-minute clip of a discussion he had with Colin Wright, who explains why sex in humans is binary. If you haven’t read my own discussions on this site, Colin gives a good summary.  I should add that I’ve found a single case of an individual who produced both types of fertile gametes, a true hermaphrodite. The person apparently both ovulated and fathered a child (Wright mentions the possibility of such an individual at 4:47). But this is not, as Colin explains, a member of a third sex, but an individual combining both sexes. Nevertheless, one could count such a hermaphrodite as an exception to the binary, as Sax (2002) did when deriving the 0.018% figure for exceptions to the sex binary (mostly intersex individuals).

Wright also dispels the 1.8% figure of “nonbinary” individuals bruited about by Anne Fausto-Sterling. Though she later rejected her own figure, people are still using it. Either they haven’t followed the literature, or they know better but choose to hide the revisions.

Wright helpfully explains and dispels the ideological point of view that drives people to distort biological truth in this way:

I suspect the willingness to unthinkingly push pseudoscience of this sort is well-intentioned. People seem to believe that one must reject the human sex binary in order to ensure transgender rights.

You don’t need to pretend humans can change their sex to be able to defend trans rights. It’s the equivalent of demanding we must agree the world is 6,000 years old in order to guarantee religious freedom.

If you use false premises to argue for certain rights, many will feel inclined to dismiss the validity of these rights along with your junk justifications. Not only is all of this completely unnecessary in the fight for trans rights, it can be counterproductive too.

All that is needed to advocate for trans rights is a commitment to individual liberalism. That’s it. Pushing false claims about gender as a condition of certain rights turns your cause into a religion. And I will invoke the very same liberalism I use to defend trans rights to reject your new faith. There is no contradiction here.

Why do I bang on about this (I think this is the last post about binary sex for a while)? Because I simply can’t stand people distorting biological reality in the service of ideology. This isn’t going to kill people, as Lysenko’s bogus “vernalization” theory did, but it still confuses and misinforms people, and infuses our field with an ideology that has spread to scientists themselves—as well as journals and granting agencies—who chill the atmosphere for free discussion. And that impedes the search for truth that is science. 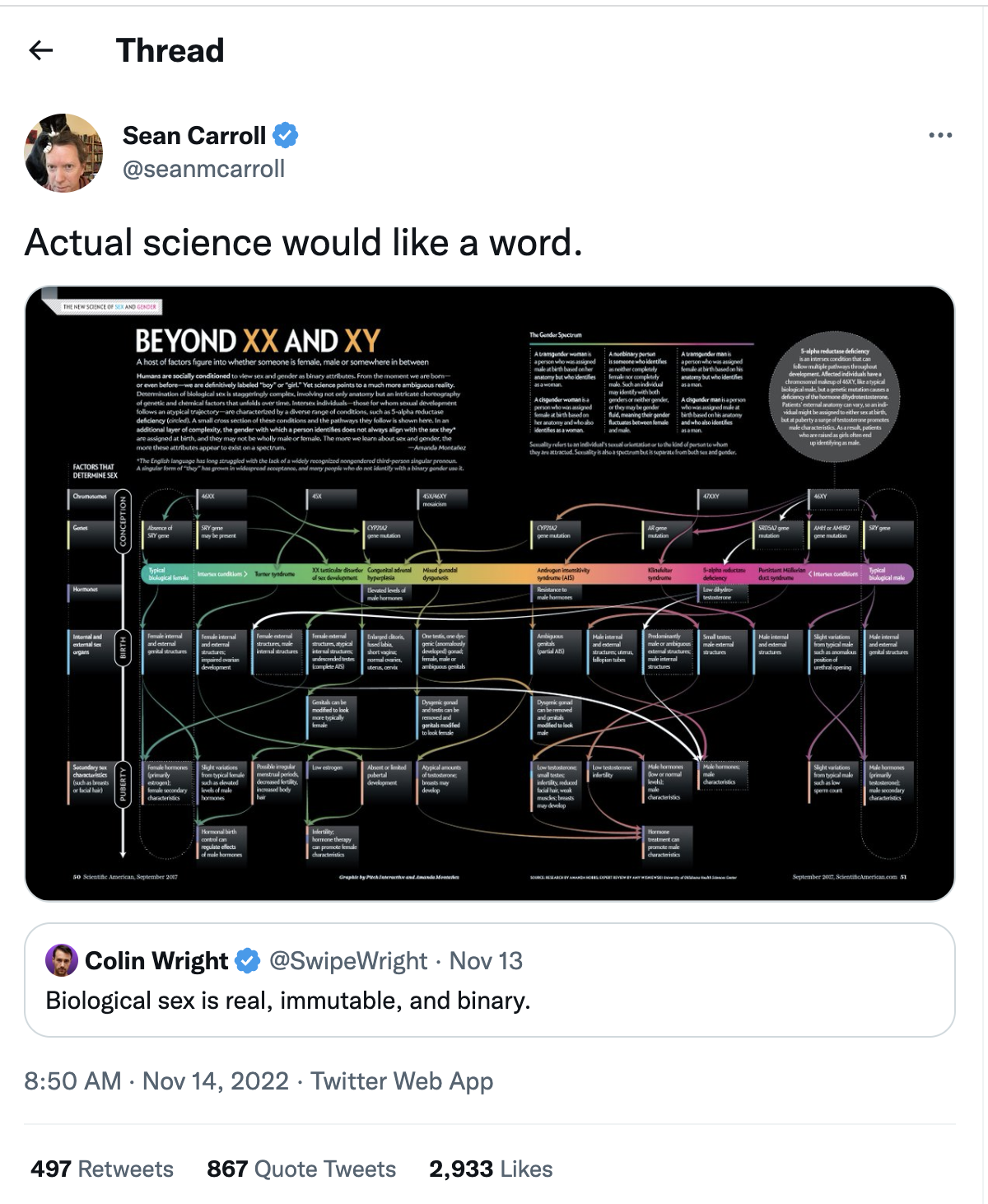 121 thoughts on “Stephen Knight on Sean Carroll, Colin Wright, and the binary of sex”