The NHS has come to its senses and issued a whole new set of protocols for treating gender dysphoric youth. Previously, the Tavistock Clinic in London was the go-to place for these children, whose numbers have risen rapidly in the past few years, especially for females (graph below from here): 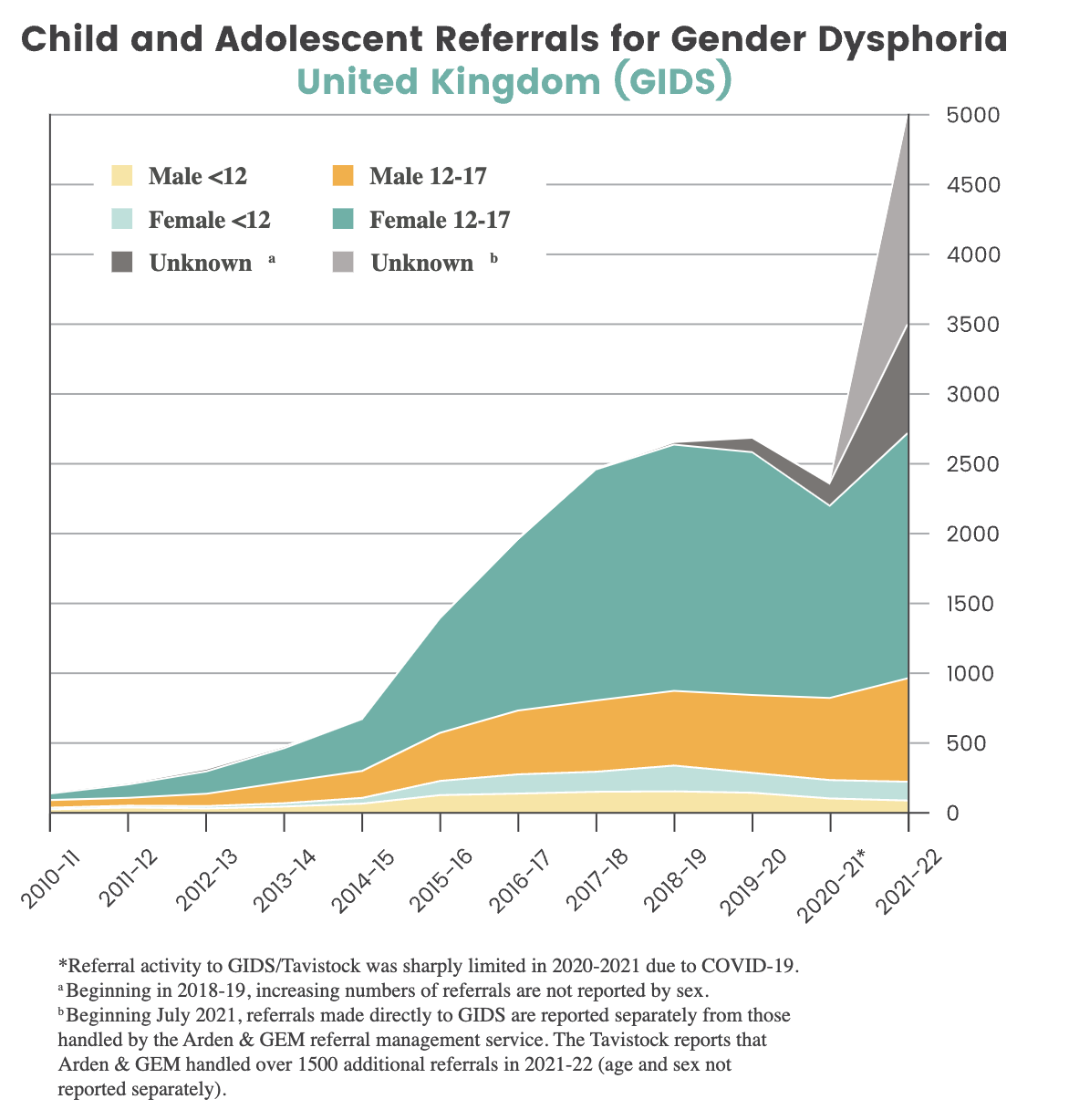 But there were complaints from patients, and a commissioned report on the Clinic by Dr. Hilary Cass damned the form of care practiced at Tavistock: “affirmative care,” which in practice meant affirming a child’s wishes about changing sex, which led to buttressing their wishes by giving puberty blockers to prepubescent youth, and ultimately adding hormone therapy and referring children for surgery to remove breasts and remodel genitals (the NHS never covered gender-transition surgery).

The problem was that many youth with gender dysphoria have mental problems or are simply distressed about their sexuality, and that lots of these difficulties resolve themselves without changing gender—often by becoming gay, which involves no drugs or surgery.

It was this rush to judgment and treatment, combined with a spate of pending lawsuits by former patients, that led to Tavistock’s downfall. Its functions will not only be farmed out to other centers, but the whole notion of “affirmative care” is being abandoned in favor of what I see as more sensible approach, which the article below calls “a holistic view of identity development in children and adolescents. Preliminary assessment will include “nonaffirmative” but supportive therapists, and there will be no “rush to hormones”;  puberty blockers (whose long-term effects are still largely unknown)  and hormones like testosterone administered only in clinical trials. The whole National Health Service protocol has been revised, and those who evade it by, say, ordering their own hormones, will not be further supported by the NHS.

These changes, following protocols already implemented in Sweden and Finland, are described in the article below from the Society for Evidence Based Gender Medicine (click to read):

Here’s what the article says about why the Tavistock protocols were abandoned.

The reasons for the restructuring of gender services for minors in England are 4-fold. They include (1) a significant and sharp rise in referrals; (2) poorly-understood marked changes in the types of patients referred; (3) scarce and inconclusive evidence to support clinical decision-making, and (4) operational failures of the single gender clinic model, as evidenced by long wait times for initial assessment, and overall concern with the clinical approach.

And a bit about the new program:

The new NHS guidelines represent a repudiation of the past decade’s approach to management of gender dysphoric minors.  The “gender-affirming” approach, endorsed by WPATH and characterized by the conceptualization of gender-dysphoric minors as “transgender children” has been replaced with a holistic view of identity development in children and adolescents. In addition, there is a new recognition that many gender-dysphoric adolescents suffer from mental illness and neurocognitive difficulties, which make it hard to predict the course of their gender identity development.

“Social transition” comprises the acts of medical professionals facing children with gender with gender dysphoria and helping them change gender with puberty blockers and hormones.

There are ten highlights (i.e., changes from the Tavistock protocols) in the NHS’s new system. They’re described in the article, and I’ll put them below with one or two aspects of each intervention (there are more in the article). All extracts from the article are indented; my own comments are flush left.

1. Eliminates the “gender clinic” model of care and does away with “affirmation”

They outline the criteria needed to address gender transition, which include “persistent and consistent gender dysphoria” and “a clear and full understanding of the implications of social transition.”

3. Establishes psychotherapy and psychoeducation as the first and primary line of treatment

This is one of the main ways the Tavistock model failed: it didn’t use therapists who would assess the patient objectively rather than push them into changing genders.

This is an important change because the long-term effects of puberty blockers, especially used in combination with hormones like estrogen or testosterone, are not known.

These studies will be continued into adulthood, as they should be. It’s important to know whether there are delayed injurious effects of hormones, as well as psychological “desisting”, or regret for changing gender.

6. Reinstates the importance of “biological sex”

This change and the others implicitly assume that there is such a thing as biological sex and that it’s not a social construct. They don’t say there are only two biological sexes, but I think that’s assumed.

7. Reaffirms the preeminence of the DSM-5 diagnosis of “gender dysphoria” for treatment decisions

The DSM-5 is the Diagnostic and Statistical Manual of Mental Disorders, Fifth Edition—the latest set of criteria used to diagnose mental illness. The addition of distress is important because without distress the panoply of treatments outlined for gender dysphoria aren’t used.

This is one of the most important changes, advocating a variety of expertise brought to bear on gender dysphoria, none of it dedicated to affirming the patient’s wishes:

8. Clarifies the meaning of “multidisciplinary teams” as consisting of a wide range of clinicians with relevant expertise, rather than only “gender dysphoria” specialists

These criteria are used for specifying treatment for other illnesses like depression.

10. Asserts that those who choose to bypass the newly-established protocol will not be supported by the NHS

The NHS will not support further treatment of those who obtain and take hormones outside of the NHS’s protocols.

Can anybody argue that these are not more sensible protocols than the ones used previously? Since most gender dysphoric children turn out to be either cis or gay if not given hormones and surgery, shouldn’t one take these kinds of precautions before injecting or cutting such people?

The premise, of course, is that many children who are dysphoric don’t need “affirmation” (especially if there’s social pressure to change their gender), but compassionate therapy to see how serious their problem is and how strongly they wish to change identity. If you can’t vote until you’re 18, why should you be able to start changing your hormones and body parts before then?  18 is just a subjective age, of course, but the protocol is based on not immediately accepting the views of children—or their parents, who can pressure kids destined to be gay into seeing themselves as transsexuals—that they’re in the wrong body. You don’t just affirm that right off the bat, but ascertain it with intensive therapy.

Of course there will be many objections to these protocols by trans activists who are of the “affirmative care” stripe, but I think that in twenty years we’ll look back on the present as a time when many children were harmed by improper medical and psychological care. That’s the basis of the more than 1,000 lawsuits likely to be filed against Tavistock. 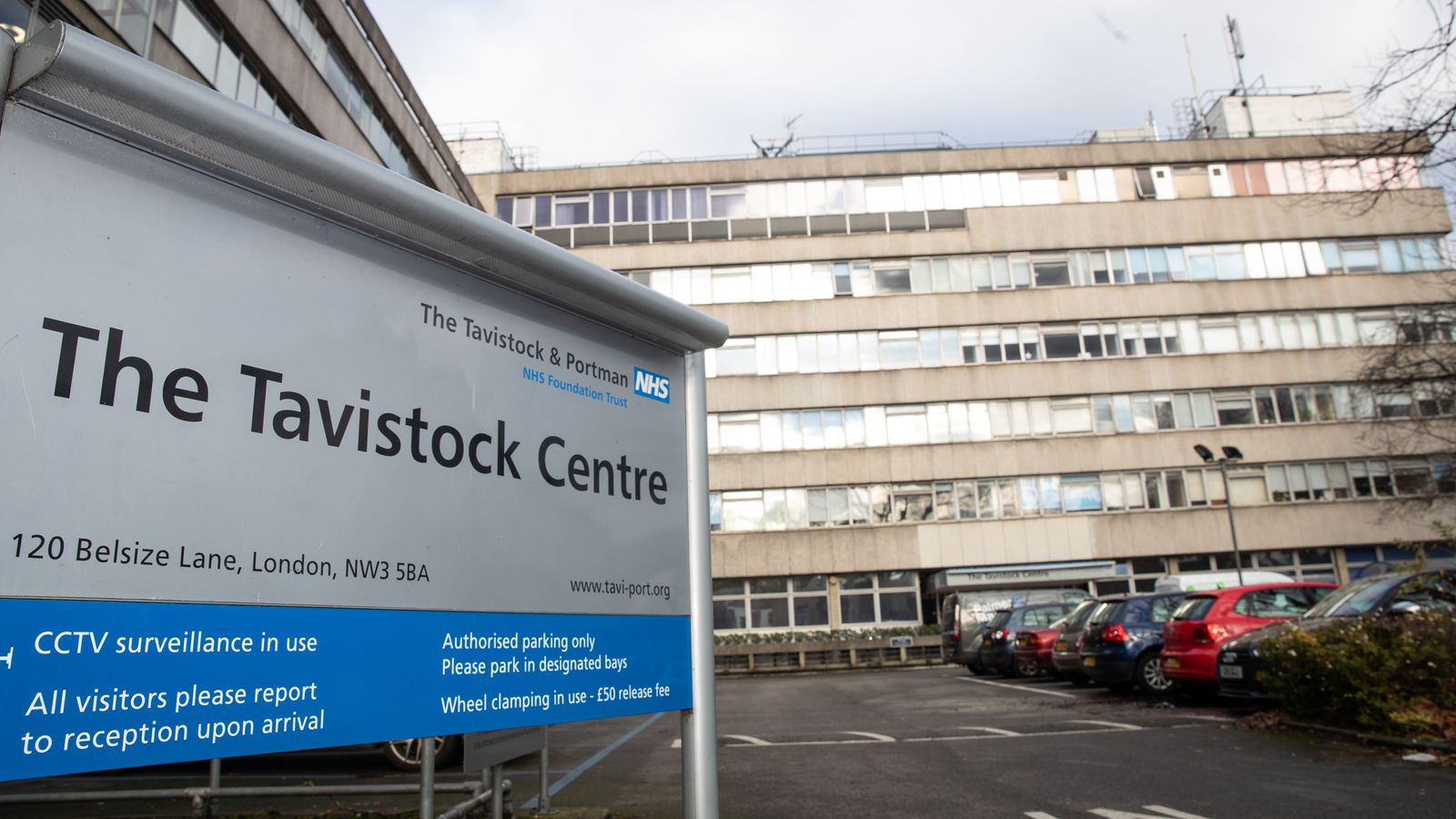