Yesterday I described how a claim by Wehi et al. that the Polynesians were the first to discover Antarctica (in the eighth century!) had been debunked—twice. The claim was based purely on oral legend written down in the 19th century and then mistranslated and misinterpreted.  There’s no doubt that Wehi et al.’s claims were dead wrong, even on the basis that the Polynesians didn’t have boats then that could go anywhere near Antarctica.  I’ve put references to the Wehi et al. paper and the two rebuttals at the bottom of this post.

Now I’ve discovered that the same Priscilla Wehi, along with several of her colleagues on the Roy Soc NZ paper, also wrote a related paper in Nature Ecology & Evolution that same year, making the same bogus claim about the Polynesians discovering Antarctica, and even expanding it. Click to read:

Here’s part of the claim:

Human voyaging into Antarctic waters by Hui Te Rangiora and his crew on the vessel Te Ivi o Atea in around the seventh century (Fig. 1) may have followed cetacean migratory routes from Rarotonga in the Cook Islands. In so doing, they were perhaps the first humans to set eyes on Antarctica; evidence of their likely discovery lies in its name Te tai-uka-a-pia which denotes the frozen ocean, as well as oral accounts handed down through the generations. Similarly, accounts of the flora, fauna and physical geography indicate sub-Antarctic as well as likely Antarctic visitation by Hui Te Rangiora and his crew (Fig. 1); thirteenth century Māori sub-Antarctic exploration is well-established archaeologically. Later nineteenth century sealing and whaling and Māori and Moriori settlement in the Auckland Islands continues this voyaging legacy. Other noted Māori explorers of the Antarctic region include Tamarereti, who pursued the origins of the aurora australis (Fig. 1). These traditions record enormous ice cliffs with towering mountain ranges behind them, with nowhere to gain a footing, and suggest that those with Tamarereti gained an understanding of the physicality of the Antarctic region, including the Antarctic Circle. Hui Te Rangiora’s descendant Te Aru Tanga Nuku hundreds of years later also journeyed far into southern waters

And part of the timeline of human events occurring in Antarctica, clearly showing the Polynesian precedence: 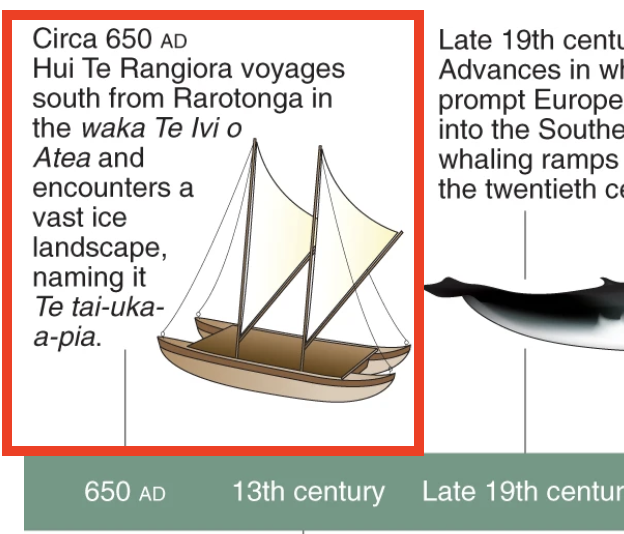 Every bit of the above is wrong. Antarctica was first glimpsed by a Russian expedition and a separate British expedition in 1820—within three days of each other. Publishing what’s above is like saying “ancient narratives of the people of South America show that they were the first to settle Polynesia.” (That’s what the Kon-Tiki expedition tried to prove.) But that’s wrong.

Nature E&E is of course far more prestigious than the Proceedings of the Royal Society of New Zealand and Polar Record, where the original paper and rebuttals were published.

The rest of the paper is a long argument for including Indigenous peoples’ knowledge in the management of Antarctica, implying that they’ve been excluded by colonialism. I have no strong feelings about this except that there are other possible reasons besides bigotry. But the falsity of the claim above does somewhat deflate their argument:

My point instead is that Nature Ecology & Evolution published something palpably wrong and, worse, OBVIOUSLY wrong—but they didn’t catch it or correct it. A colleague told me to write a response, but it’s not worth my time, and besides, this uber-woke journal wouldn’t accept it.

Let the readers of this journal continue to believe false claims, or, if you’re a Nature editor reading this, why don’t you issue a correction? It would take only two lines.

Anderson, Atholl, Sir Tipene O’Regan, Puamiria Parata-Goodall, Michael Stevens, and Te Maire Tau.  2021.  “On the improbability of pre-European Polynesian voyages to Antarctica: a response to Priscilla Wehi and colleagues.” Journal of the Royal Society of New Zealand: 1-7. [This link might work better for some readers. GCM]