Nothing better shows the kind of “knowledge” that promoters of New Zealand’s indigenous “ways of knowing” (mātauranga Māori ) want taught in science class than the claim that the Māori—or rather, their ancestral Polynesians—discovered Antarctica in the 7th century A.D. (The Māori could not have done it at that time since their East Polynesian ancestors didn’t colonize New Zealand until the fourteenth century.) Nevertheless, as I described in two posts in January—here and here—the controversy was hashed out in three articles in the Journal of the Royal Society of New Zealand (JRSNZ) and Nature Ecology & Evolution. These aren’t free online, but judicious inquiry can yield copies.

(By the way, the generally accepted date for the discovery of Antarctica, and by that I mean seeing the continent, is January 27, 1820, when a Russian expedition saw an ice shelf connected to Antarctica.)

The first paper, by advocates Wehi et al., described “evidence” that Polynesians were the first to see Antarctica in the seventh century, AD—over a thousand years before the discovery by the Russians.  They supported their claims by relying on oral legends, the “gray literature” (semi-scholarly but tendentious analyses of oral legends), and dubious interpretations of those legends. For example, the East Polynesians weren’t sailing then; the supposed boat that saw Antarctica was said to be built of human bones (and even a wooden one could not survive Antarctic waters), and the scenario relies heavily on a word almost surely translated as “the frozen sea” by the authors of the first paper below:

This claim was uncritically accepted by many in the press, including the credulous Guardian (click screenshot below to read):

A rebuttal (a “short communication”), written by a group including Māori scholars, was then published in the same journal. It pointed out all the problems noted above: the use of orally transmitted legends (not written down until the mid-19th century), the improbability of Polynesian sailing vessels (especially ones made of human bones) making it to Antarctic waters; the fact that East Polynesians weren’t sailing in the seventh century; that there is no archaeological evidence of their voyages, much less incursion into Antarctic waters; and the likelihood that the crucial phrase translated as “the frozen sea” probably meant “sea foam” instead. Here’s the rebuttal paper by Anderson et al.

This “rebuttal” was handled very oddly by the Royal Society of New Zealand (more on that below). The original authors then responded, but in Nature Ecology and Evolution, which also included the dubious claim of Polynesian discovery of Antarctica in its timeline below (click to read):

From Figure One of the Nature E&E paper (my emphasis, click to enlarge). Doesn’t anybody review papers any more, or are standards simply more lax when indigenous “ways of knowing” are involved? The box encloses a statement that is surely false. Come on, Nature! 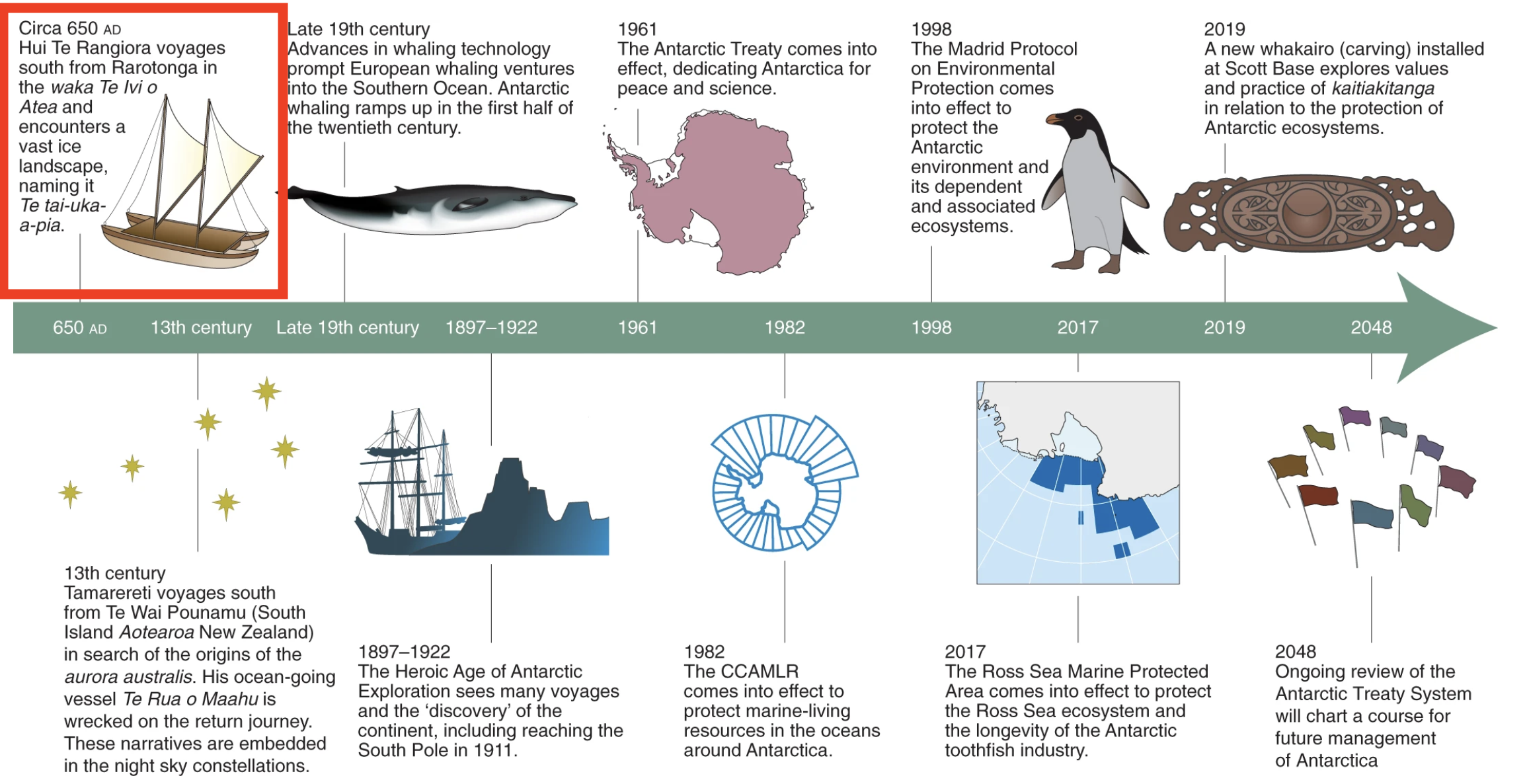 Now The Listener (site of the original fight about whether mātauranga Māori should be taught in NZ science classes alongside real science) has just reprised the whole controversy and added some new comments by the authors as well as some material about how the “rebuttal” got published. That article is below, and there’s no free link.

The authors of the original paper appear to have backed off their claim about Polynesians discovering Antarctica in the seventh century, but the critics are saying that the fight is useless anyway because much of mātauranga Māori isn’t really evidence-based science, though part of it could be. (Yes, it’s confusing.)

Click to read, or make a judicious inquiry for a copy, as I can’t copy excerpts from this Listener article: 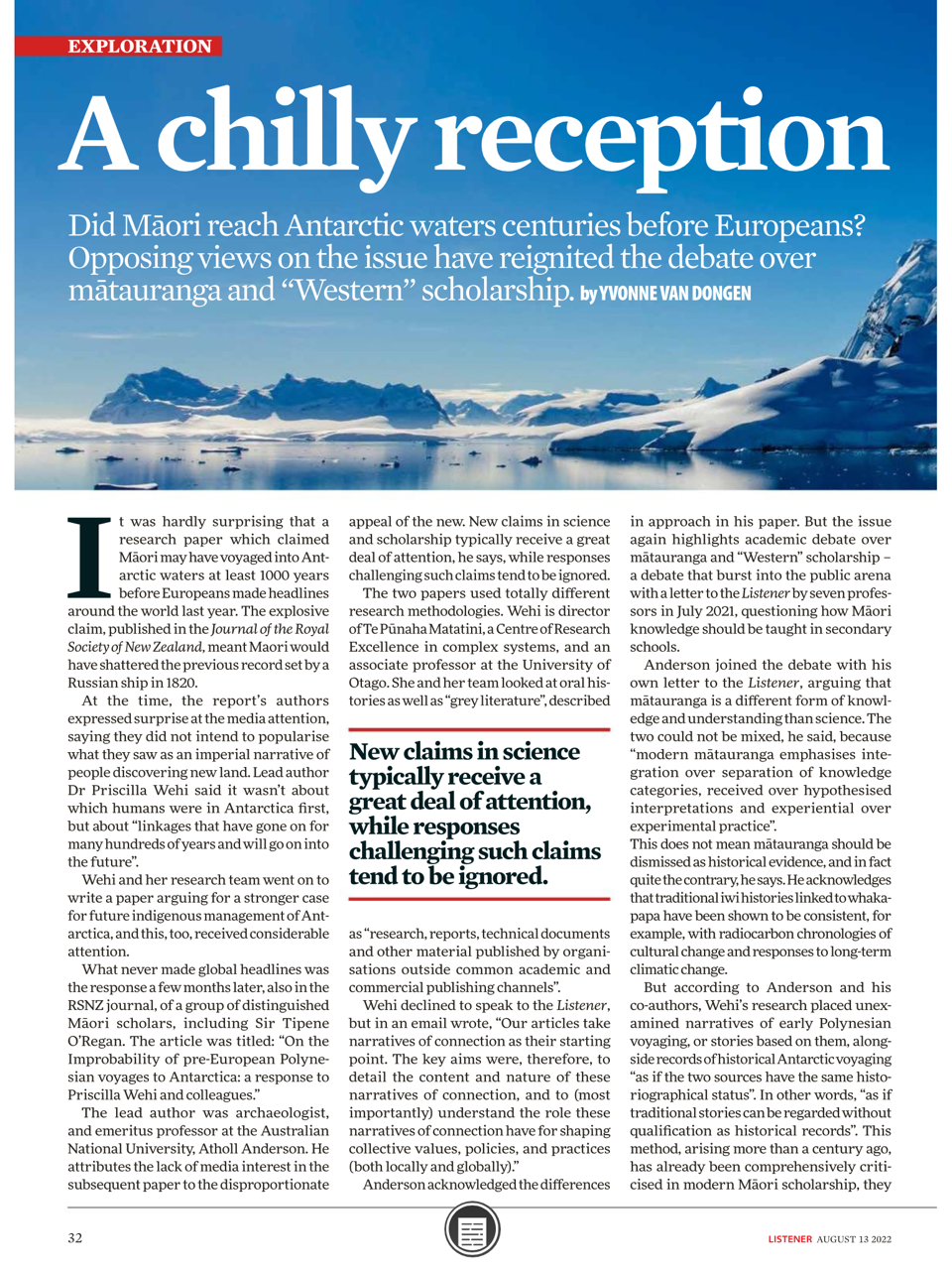 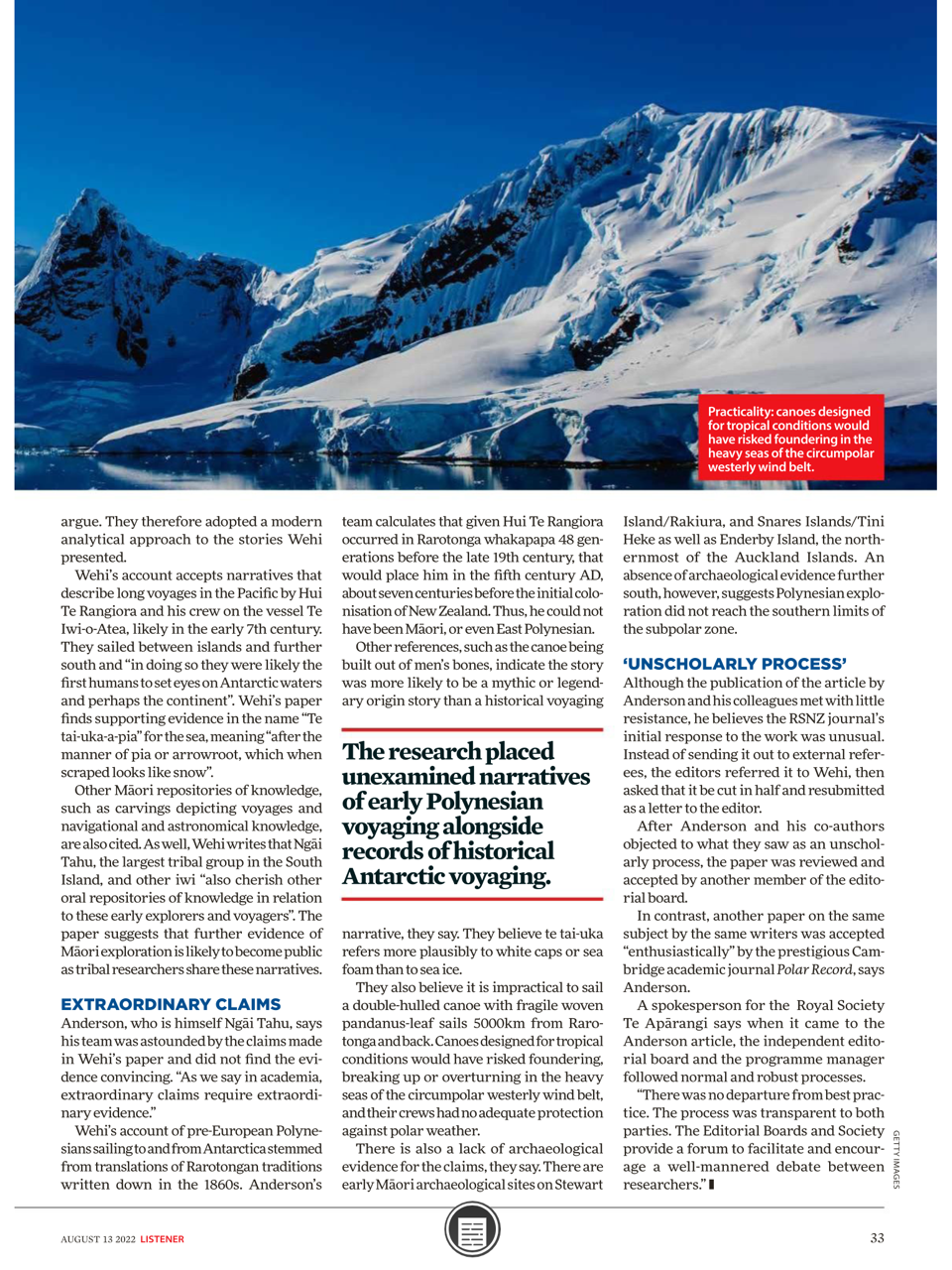 A few quotes:. In the first, one of the original authors backs off:

Dr. Priscilla Wehi said it wasn’t about which humans were in Antarctica first, but about “linkages that have gone on for many hundreds of years and will go on into the future.”

She’s not telling the truth. If you read the original paper, there’s a large section supporting the claim that Polynesians saw Antarctica first, tendered as a tribute to their endeavors and to the equality of Western and Polynesian “science”. And certainly the world press interpreted the article as meaning that!

The Listener notes that “the two papers” (original and rebuttal) “used totally different research methodologies.”  That of Wehi et al “looked at oral histories as well as ‘grey literature,’ described as ‘research, reports, technical documents, and other material published by organisations outside common academic and commercial publishing channels.” In other words, Wehi et al. used transcribed oral legends spread as a kind of conspiracy theory. 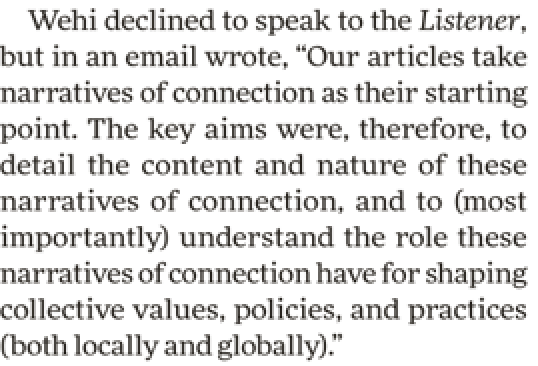 When you fail to produce convincing evidence, you just assert that you weren’t really making a truth claim, but simply showing how legends work their way into modern practice. One thing the advocates of mātauranga Māori love to argue is that its superiority to Western science lies in mātauranga Māori’s ability to show that everything in the Universe is connected. Well, physics shows that, too, but as Dick Lewontin once said, the troubling of a star doesn’t mean he has to take that into account when digging in his garden.

In the section below, the first author of the rebuttal makes a crucial admission (matauranga Maori isn’t the same thing as science), but also claims that sometimes we should accept historical claims from legend—presumably only when these are supported by empirical investigation—i.e., science writ large! 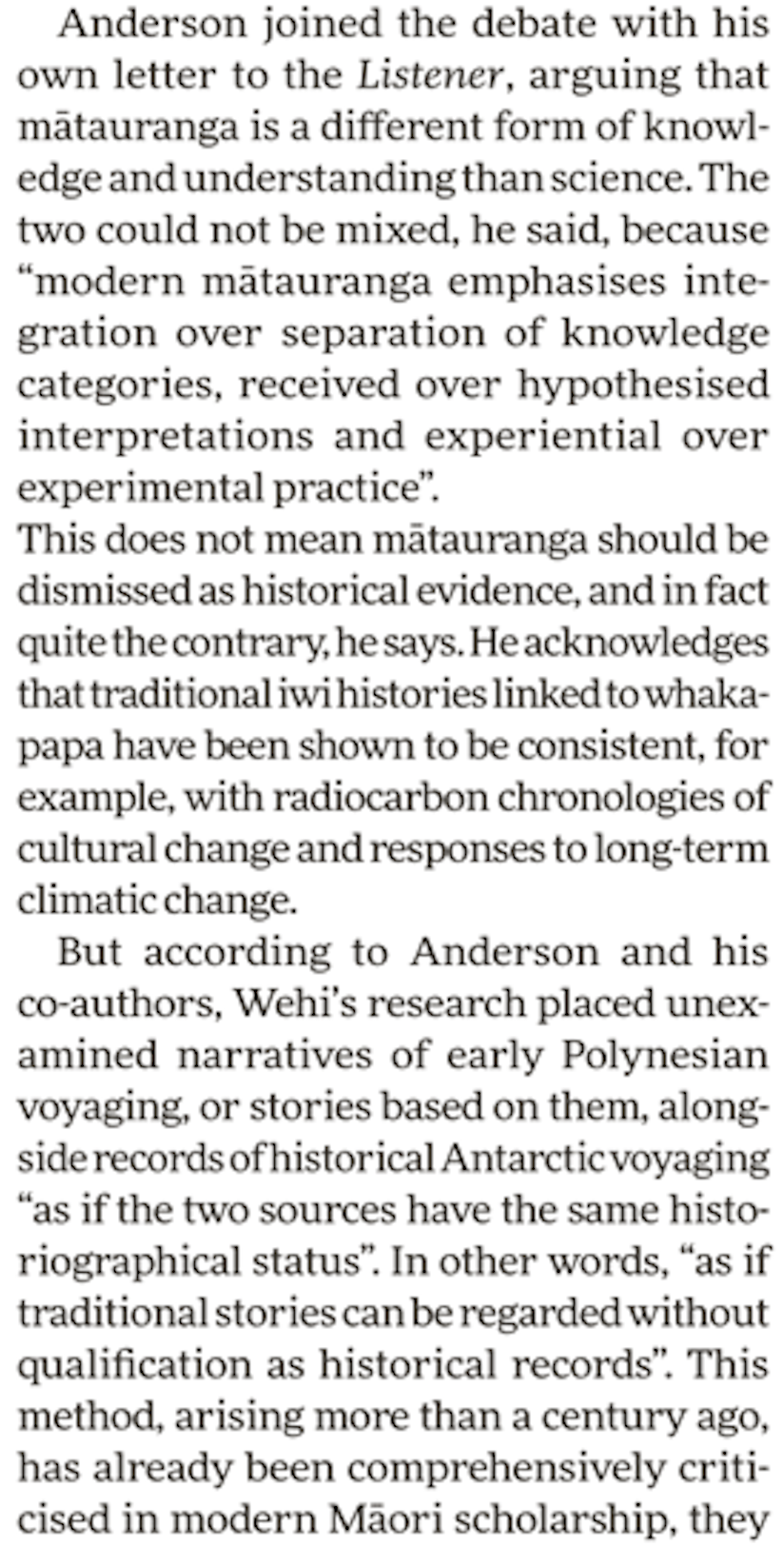 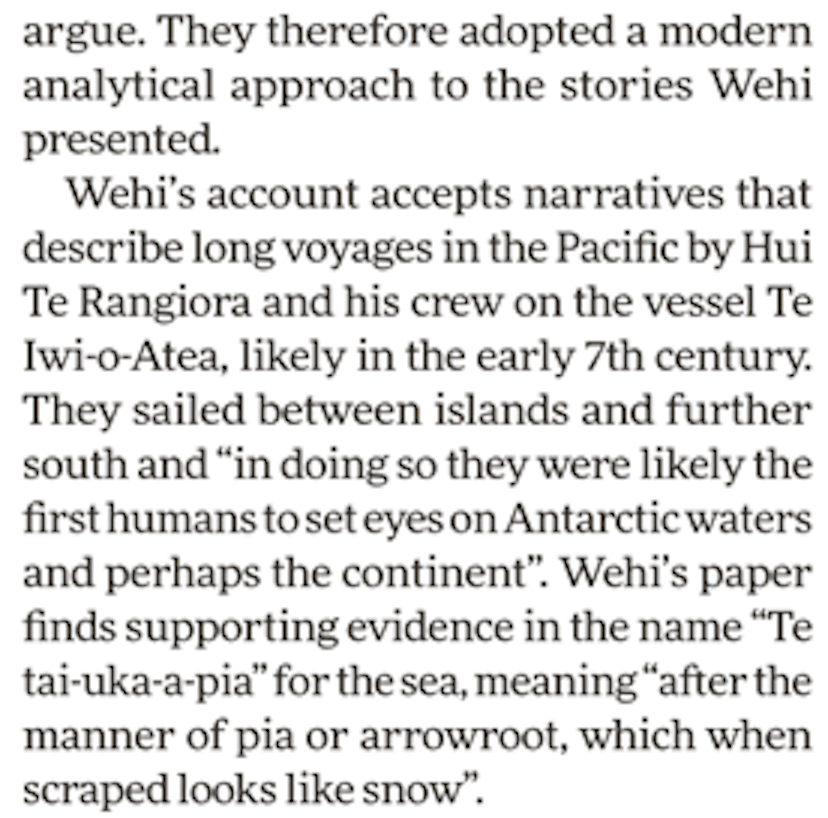 I’m not sure what Anderson means by saying that mātauranga Māori is a “different form of knowledge and understanding than science.” The understanding of legends may differ from how we understand science, but Anderson needs to realize that “knowledge” means the general acceptance of truth ascertained by empirical methods”—i.e., by science.

And yes, some legends may be true—but not this one. In the first paragraph above the authors show why mātauranga Māori should not be taught alongside science in New Zealand schools as an equally valid form of knowledge. Nevertheless, this is going to happen some day, all because the Woke, fearful of looking like racists, are afraid of rejecting indigenous ways of knowing as science.

Finally, there’s a bit about how the Royal Society of New Zealand treated the Wehi et al. claim and the Anderson et al. rebuttal differently. If you’ve followed my reporting on this, you’ll know that the Royal Society of New Zealand is a pack of slippery eels, trying to pretend they’re a scientific organization while at the same time trying not to offend the Māori and their claims of having “other ways of knowing.” I’m sorry, but those other ways of knowing are sometimes wrong, and the Antarctic claim is one example.

Here’s how the Listener describes the preferential treatment given to papers on mātauranga Māori as opposed to refutations of those papers: 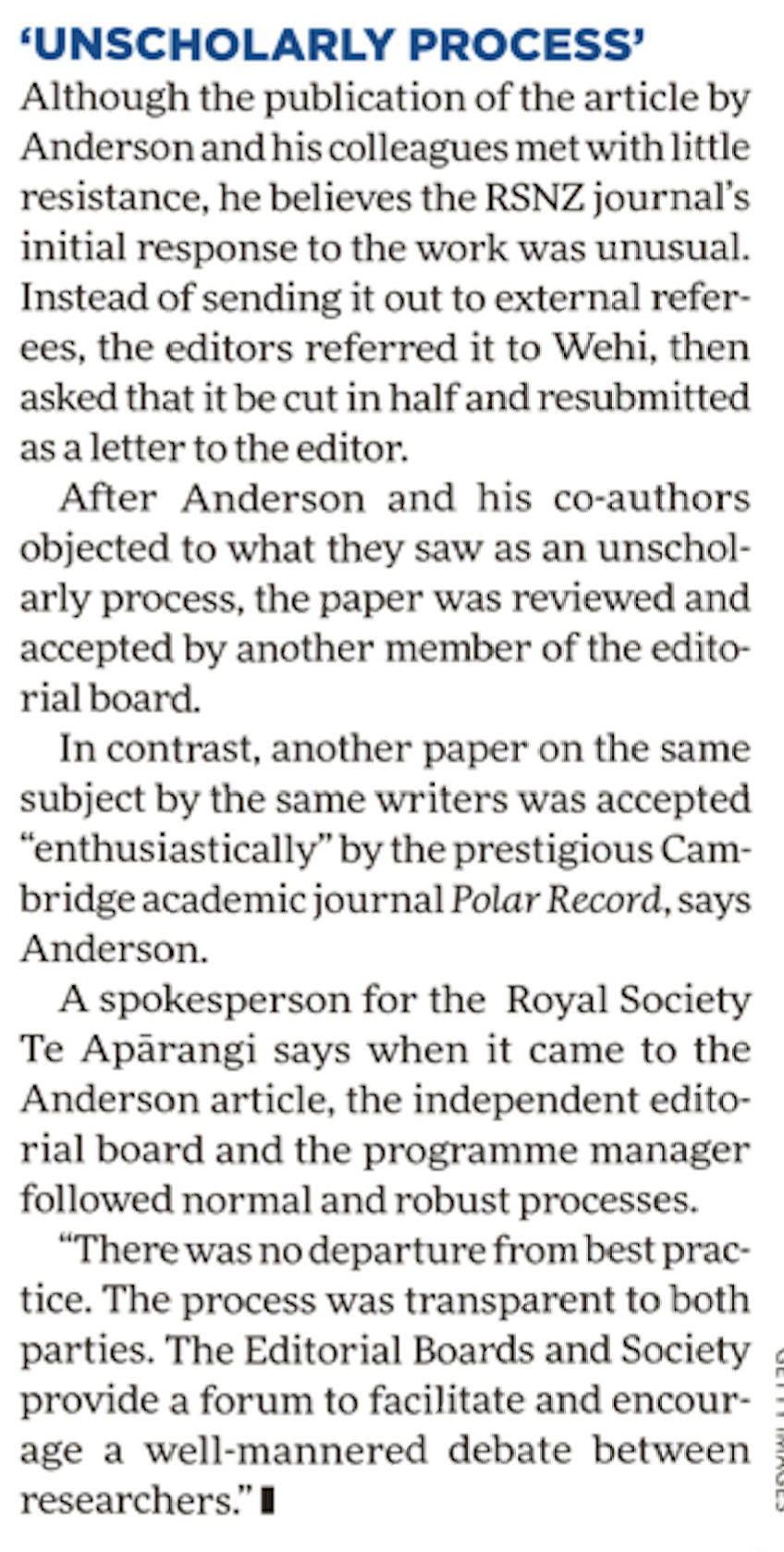 I’m not aware of any scientific organizations that sends critiques of a paper out to the authors of that paper for review. Yes, if the critique is accepted, then the original authors may be given it and afforded a chance to respond. But that’s not how the RSNZ rolls. What they did is certainly not “a best practice” for reviewing papers. As usual, the spokesperson for the RSNZ lies, saying that they just followed what is normal. They didn’t.

The slippery behavior of the Royal Society is one reason why two of its Fellows resigned after they were “investigated” for arguing that mātauranga Māori was not the same thing as science.

42 thoughts on “Once again: did the Maori discover Antarctica?”