As I’ve mentioned before, London’s Tavistock Gender Identity Development Service (GIDS) has been dismantled after a report by Dr. Hilary Cass that found serious missteps, weaknesses, and evidentially unsupported treatments of gender dysphoric children. Tavistock’s services will be farmed out to other centrs, with a concurrent de-emphasis on the rush-to-judgement form of “affirmative care” (i.e., believe the child and get doctors and therapists to simply facilitate a hoped-for sex transition), as well as a deemphasis on the use of surgery, hormone therapy, and puberty blockers.

This is in line with what other European nations are doing: pulling back from the no-holds-barred form of affirmative care, raising ages at which adolescents can get drugs or surgery, and using puberty blockers, whose safety has not been demonstrated, only in clinical trials. In those countries, it was the unevidenced medical and psychological care that led to the pullback, while in the UK it’s it’s not only that, but the threat of lawsuits against Tavistock, as I discussed in an earlier post.

The lawsuits, as the notice below indicates, are now a reality. Of the 19,000 young people treated at Tavistock, over 1,000 of them may bring lawsuits against the GIDS via “Pogust Goodhead,” an international litigation firm specializing in group claims.  The piece below allows you to start filing a claim, and I doubt readers here will be doing that, but it also outlines the basis for claims, which is of more interest. Click to read: 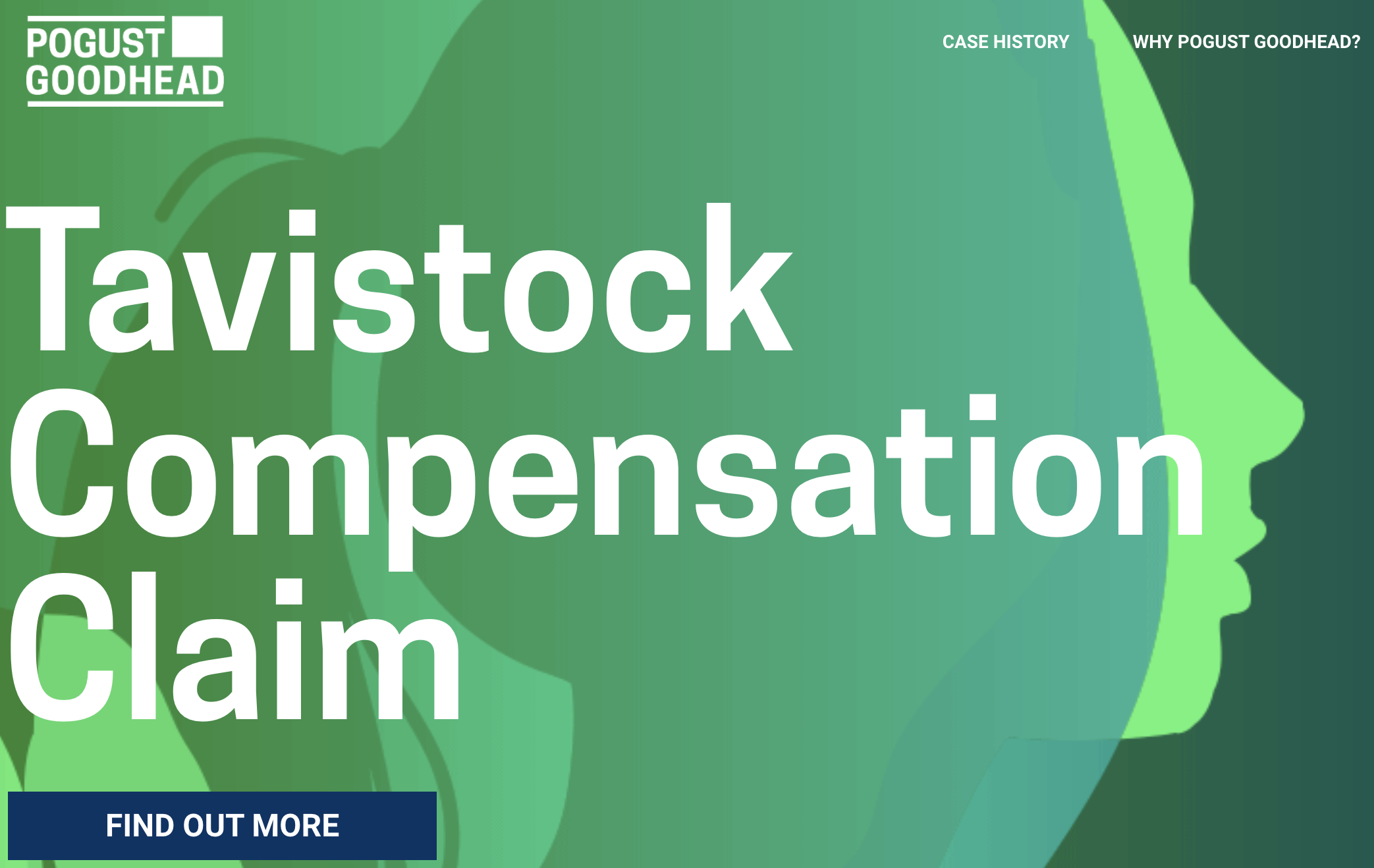 I’ll just reproduce the section, “What is the case about?”:

The Tavistock clinic opened in 1989 as the UK’s only dedicated gender identity clinic for children and young people. Prompted by concerns from patients, parents, and clinicians at the clinic, the NHS commissioned an independent review of the GIDS service.

The Cass Review’s interim report in 2022 made a number of recommendations on how the service can be changed and improved. Following the findings of the review, the GIDS Clinic at Tavistock is set to close in Spring 2023 and will be replaced with regional centres.

It is expected that localising services to regional hospitals will result in much needed improvements to standards of care and treatment and reduce lengthy waiting lists.

The report raised a number of concerns, including the lack of a consistent clinical approach to assessing the correct treatment pathway for individuals.

Members of staff at the Tavistock clinic reported pressure to adopt an ‘affirmative and unquestioning approach’ to children and young people reporting feelings of gender dysphoria.

Consequently, there are concerns that some children and young people may have been referred down the path of hormonal treatments, without adequate counselling taking place to understand the background of their feelings of gender dysphoria. The report addresses the issue of ‘diagnostic overshadowing’ meaning that other health conditions may have been overlooked.

As a result, some children and young people have been prescribed hormonal treatments before it was established that this was the appropriate treatment for them.

Service Specifications set by NHS England recommends at least 3-6 appointments at the initial assessment stage, Following this an assessment report and care plan should be produced.
Without a proper assessment process some children may have been misdiagnosed or other health conditions have been missed resulting in delays in being sign posted to the appropriate services.

Studies suggest that a number of children who attended the GIDS clinic later regretted the decision and subsequently wish to de-transition.

If you have concerns about your (or your child’s) clinical experience at GIDS at Tavistock or if you believe you should never have been prescribed hormone treatment in the first place, please get in touch with our lawyers who will be able to help and guide you through the process.

In other words, Tavistock is being accused of a form of medical malpractice: rushing first to judgment and then to treatment.

I don’t know how successful these lawsuits will be, but I doubt that this firm, which has a good record of successful litigation, would instigate such a large-scale lawsuit unless they thought they had a good chance of winning, whether it be in the courts or via settlements.  Let this be a lesson to those Americans and American organizations who are huge advocates of “affirmative care.” As I said, money talks louder than anything in America, and if we’re to assure that gender dysphoric children get thoughtful and empathic treatment, only the threat of lawsuits will do that.  Even ideology must bow before Mammon.

19 thoughts on “Lawsuits impending against Tavistock”