It’s been a while since we’ve had photos from reader, physicist, and master origami artist Robert Lang, who lives in California.  Here’s a spate of fauna with Robert’s captions indented. Click on the photos to enlarge them:

My office window looks out into the Angeles National Forest, so I get a lot of animal visitors; I keep a camera on my desk so when something interesting wanders by, I can just grab it and shoot. A few months ago we did a little landscaping and installed a water feature, which has been quite the popular visiting spot—no surprise in this drought-stricken semi-desert region! Some of these pictures were also taken on the local trails.

I’ll start with some reptiles and mammals; subsequent posts will include visitors of the avian persuasion.

The most common vertebrates I see on the trails and in back are lizards. The largest is the Coastal Whiptail (Aspidoscelis tigris stejnegeri), which is a real beauty with its striking spots. 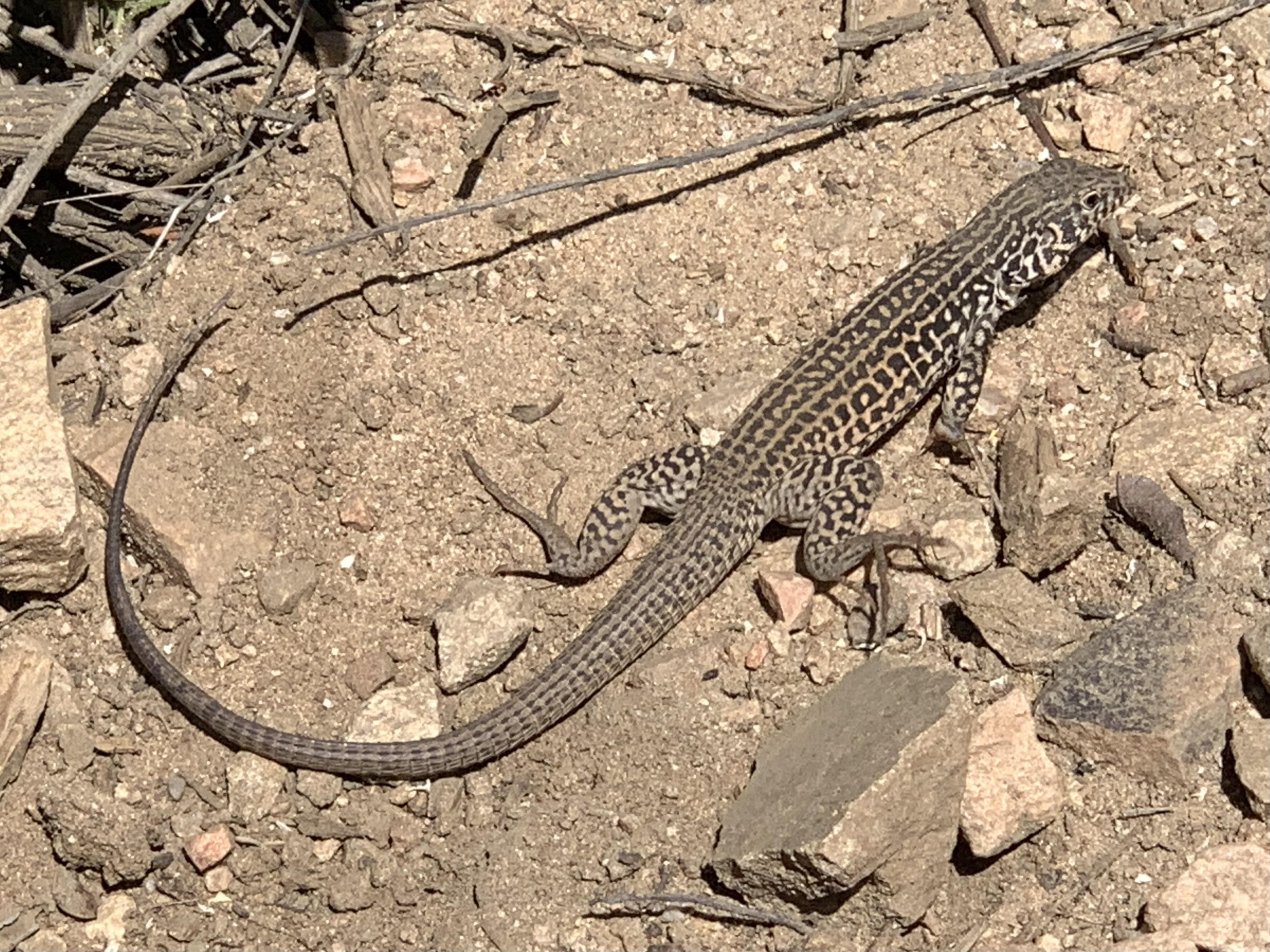 Smaller, but more common, are the Western Fence Lizards (Sceloporus occidentalis), which can be seen in both dark forms or a brilliantly iridescent version: 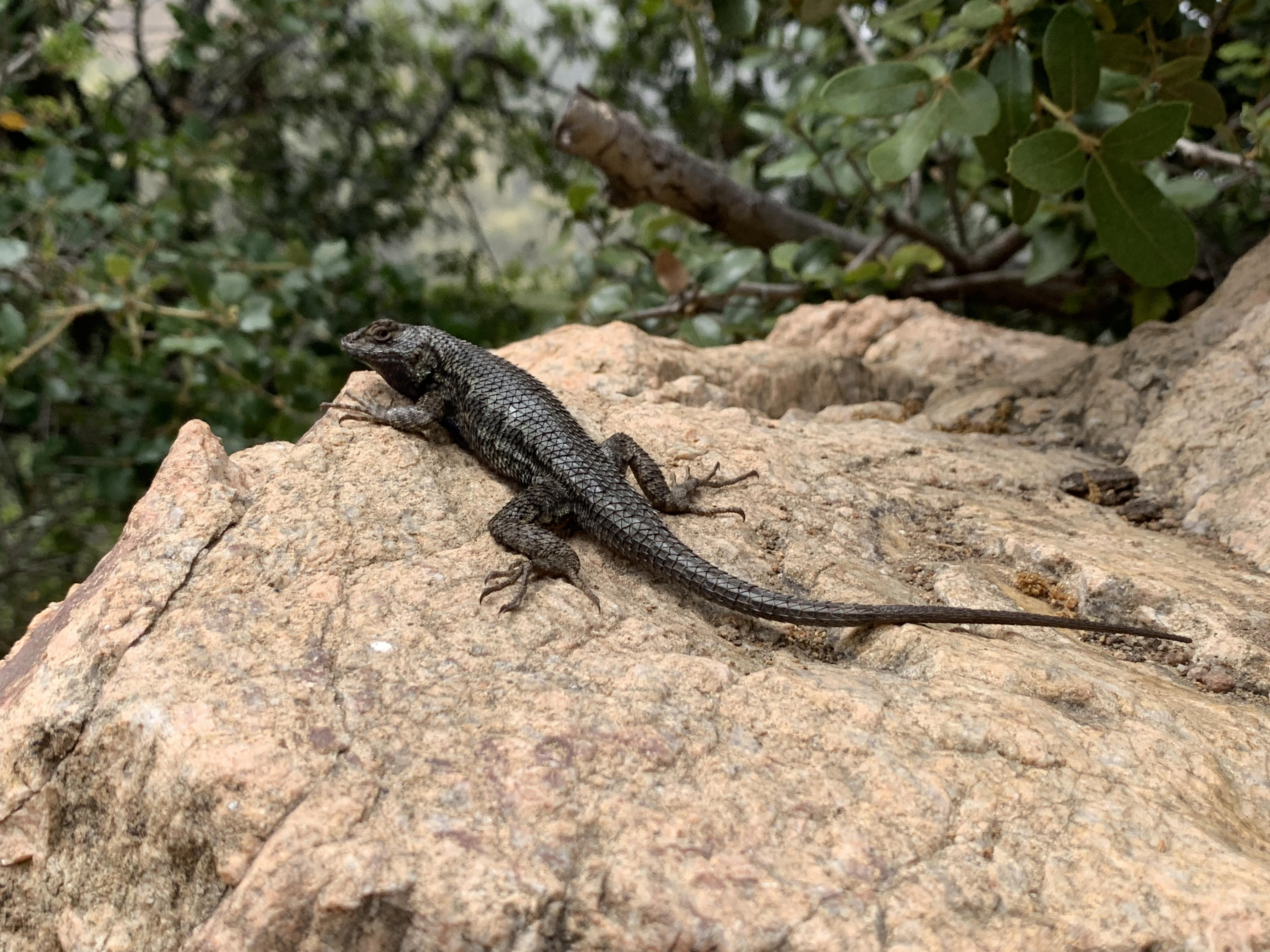 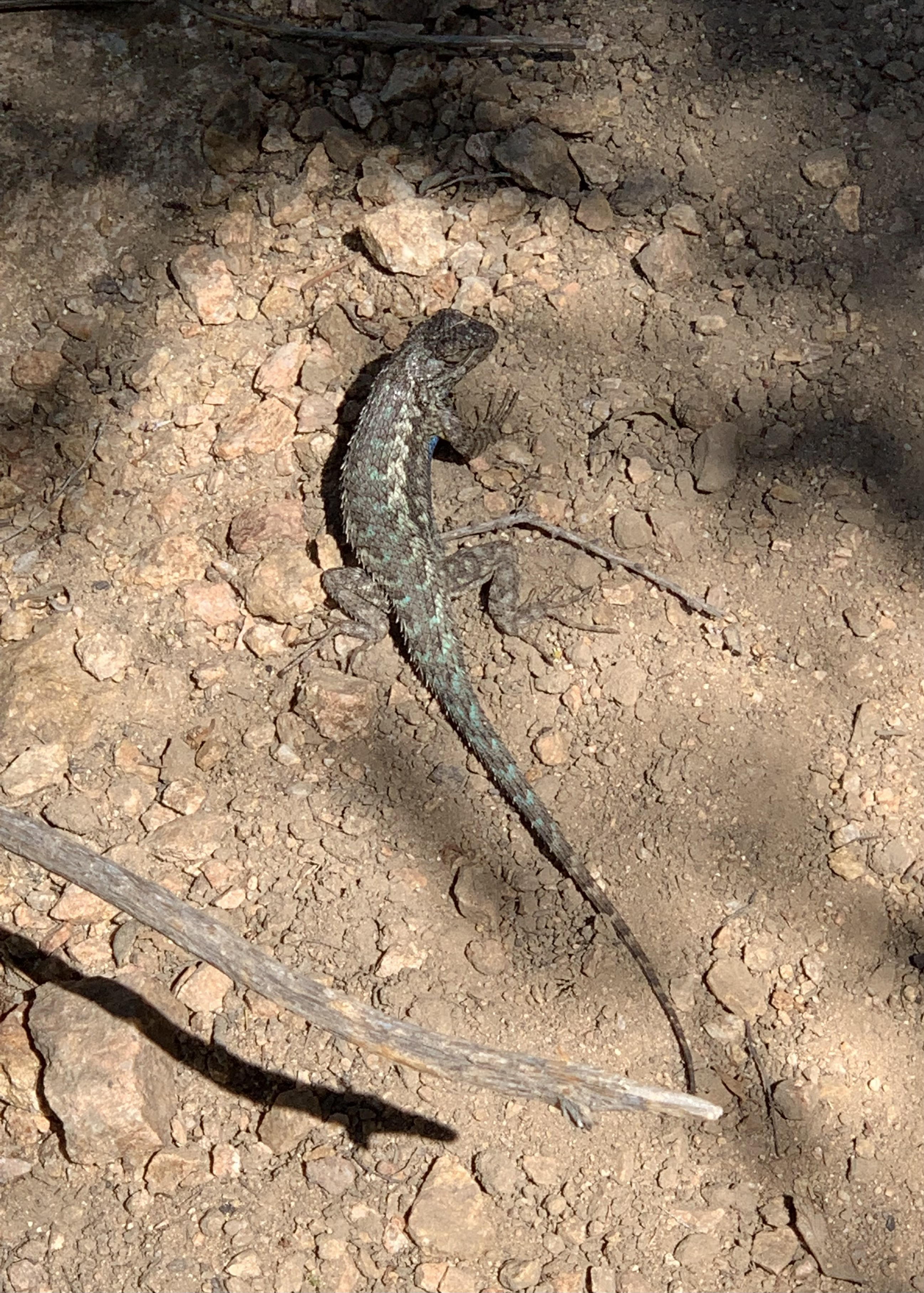 Not only are these the same species: they could even be the same individual! Western Fence Lizards can change their color during the day, starting out dark in the morning to absorb the sun to warm up, then lightening later in the day when they don’t need the extra heat.

Both lizards are sometime prey to the Gopher Snake (Pituophis catenifer), the most common snake around here. They often give hikers a start, because their pattern is suggestive of the local rattlesnake, but they’re harmless to people (and help control the local rodent population as well). 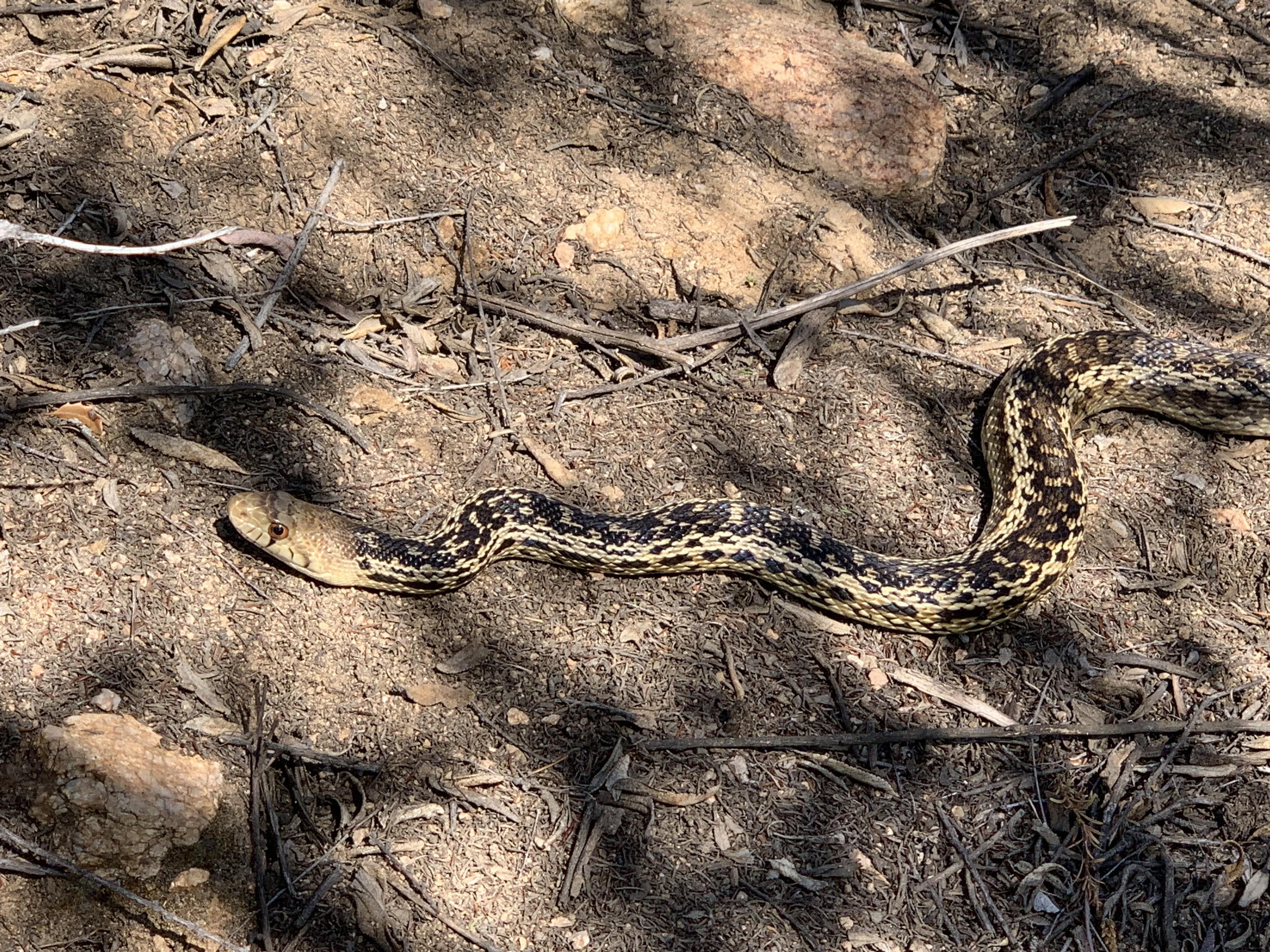 Another harmless rodent-eater is the Striped Racer or California Whipsnake (Masticophis lateralis). These guys zip through the brush! But this one was hanging out on the trail, not moving for about 30 seconds, then ZOOM—and he was gone. 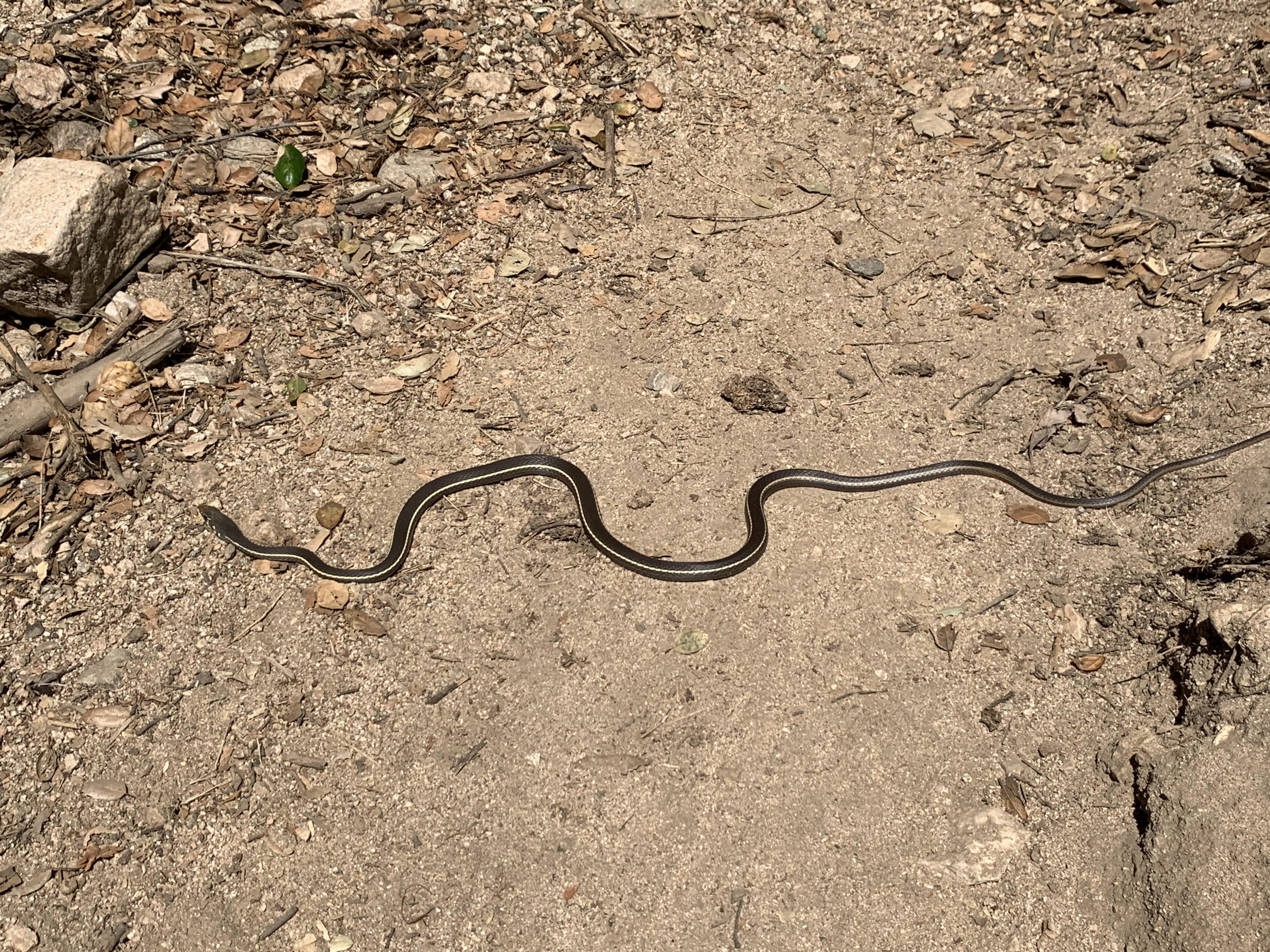 Of course, the one that everybody worries about is the Southern Pacific Rattlesnake (Crotalus oreganus helleri). This one was resting on my front doorstep. Once you know where they are, there’s no danger, of course—you just keep your distance. It’s the ones you don’t see that you have to worry about. 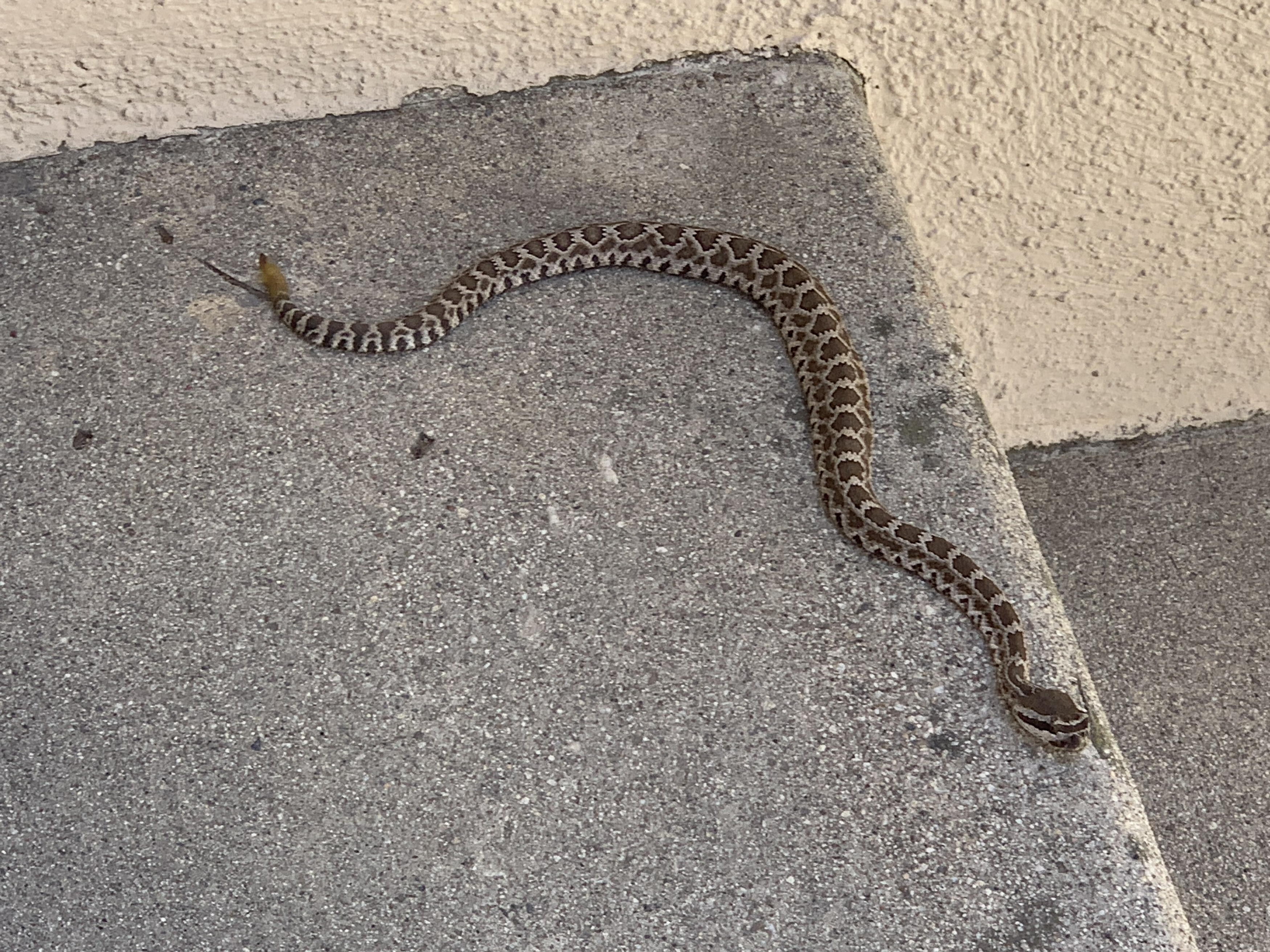 And now, on to some mammals, from small to large.

We do get the occasional chipmunk (Neotamias sp.): 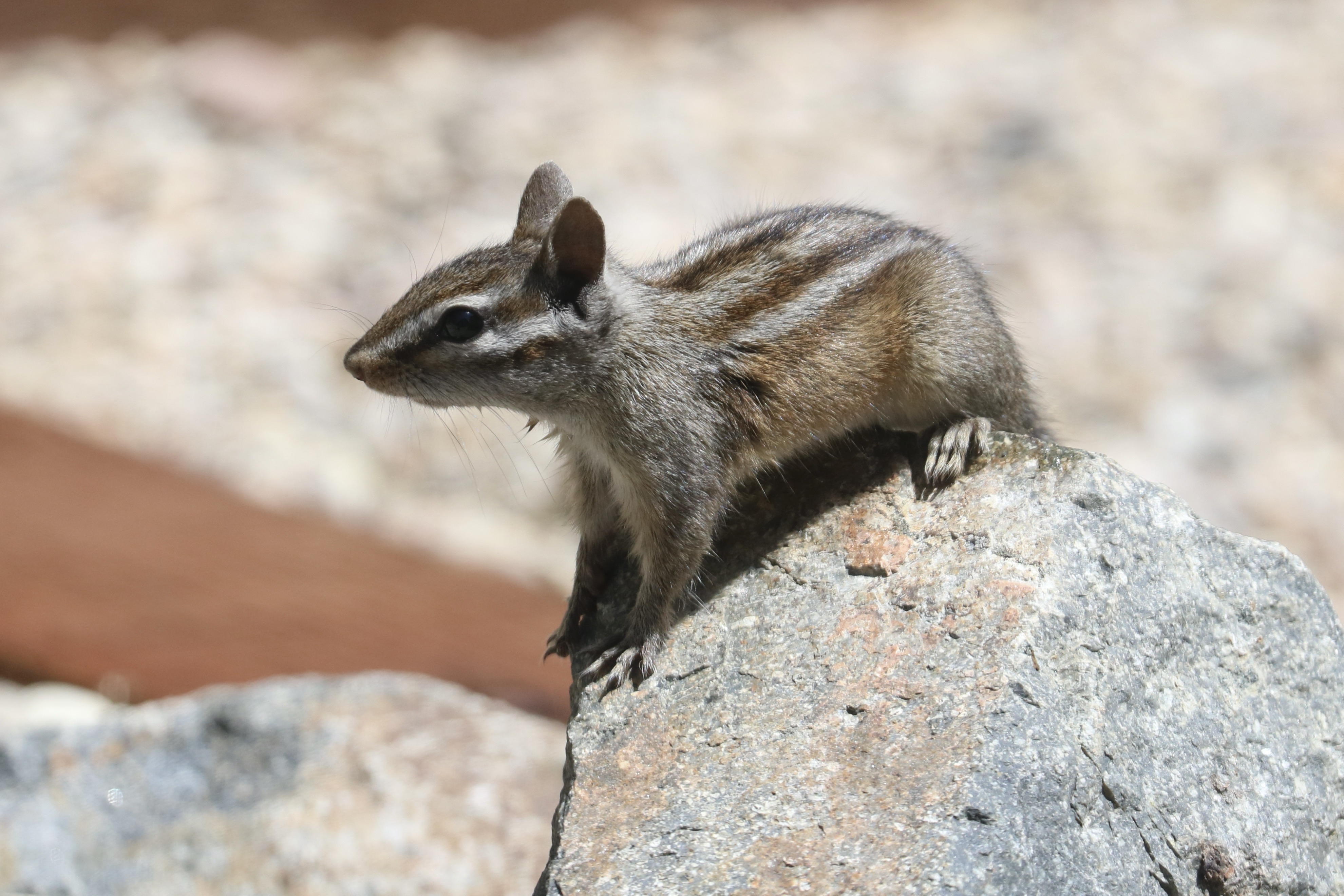 But the most common small rodent around here is the California ground squirrel (Otospermophilus beecheyi). 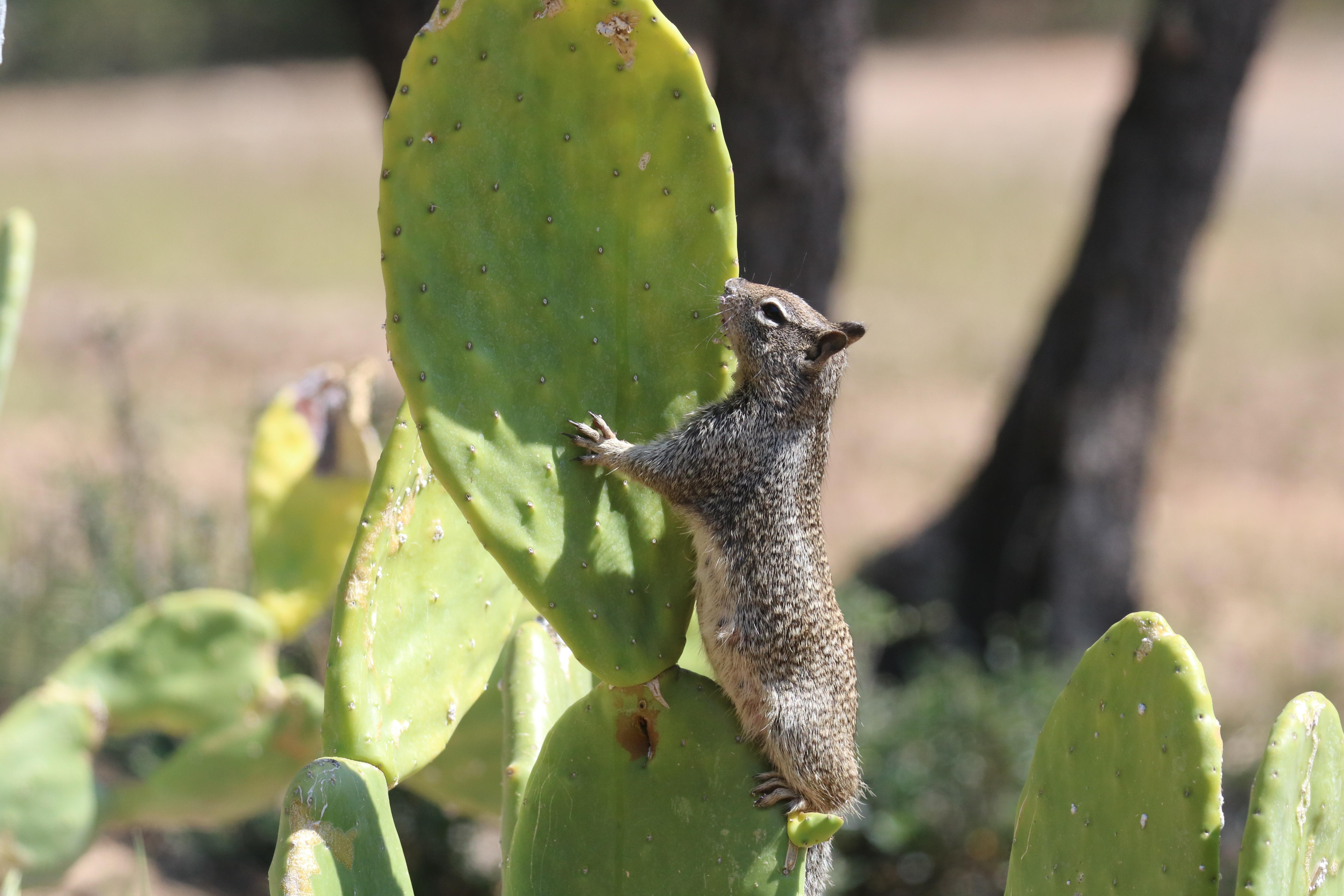 With a few trees on the property, we also get the Western Gray Squirrel (Sciurus griseus): 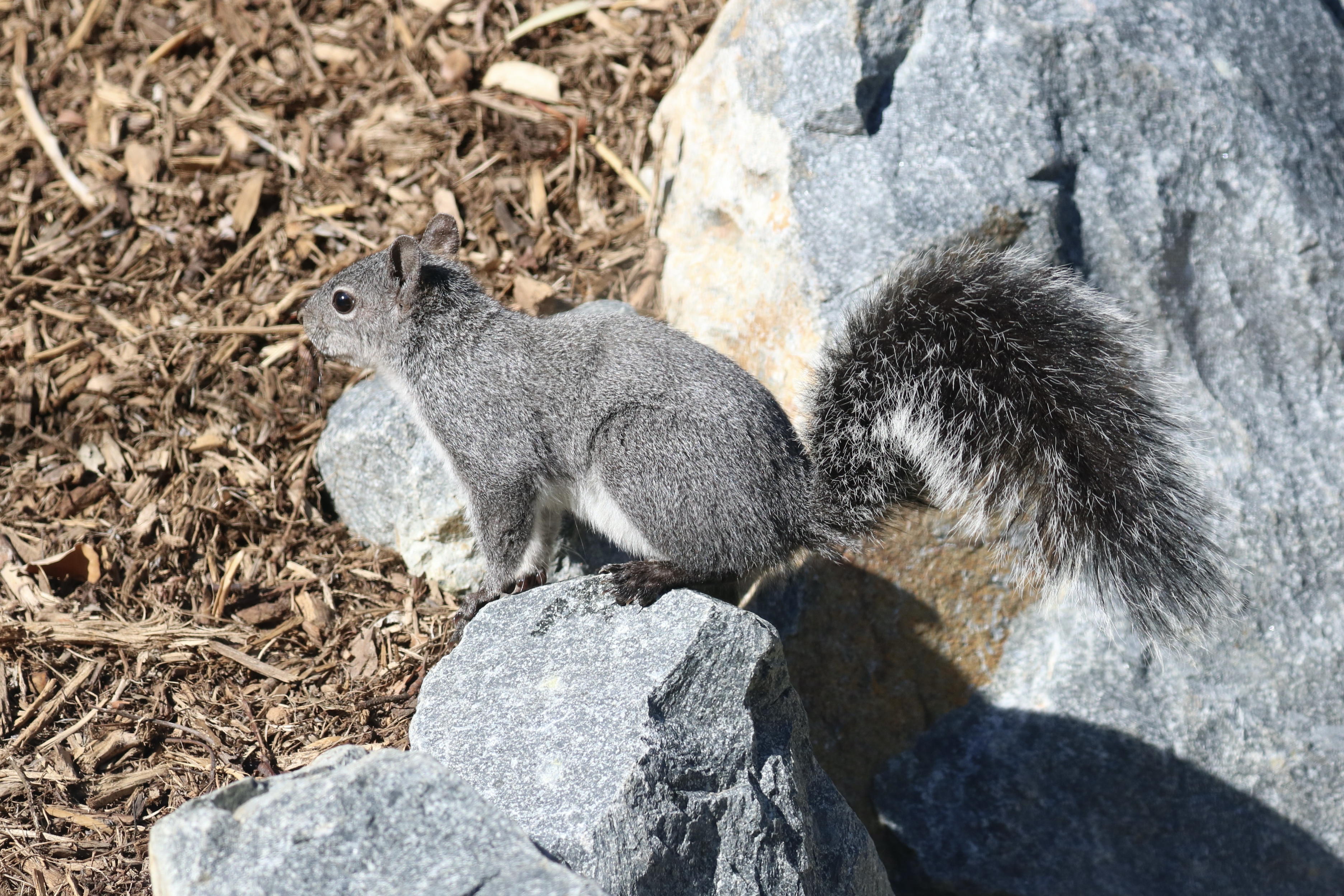 The gray squirrel is grayer than the more mottled ground squirrel, and has a far more luxuriant tail.

My studio is right on the boundary between two ecological zones: the Coastal Sage Scrub, which is low open brush, and the chaparral—dense, chest-high or higher, and nearly impenetrable to bush-whack through (at least, not without getting a lot of scratches along the way). So I get visitors from both communities. From the CSS, there’s Audubon’s cottontail (a.k.a. the Desert Cottontail) (Sylvilagus audubonii): 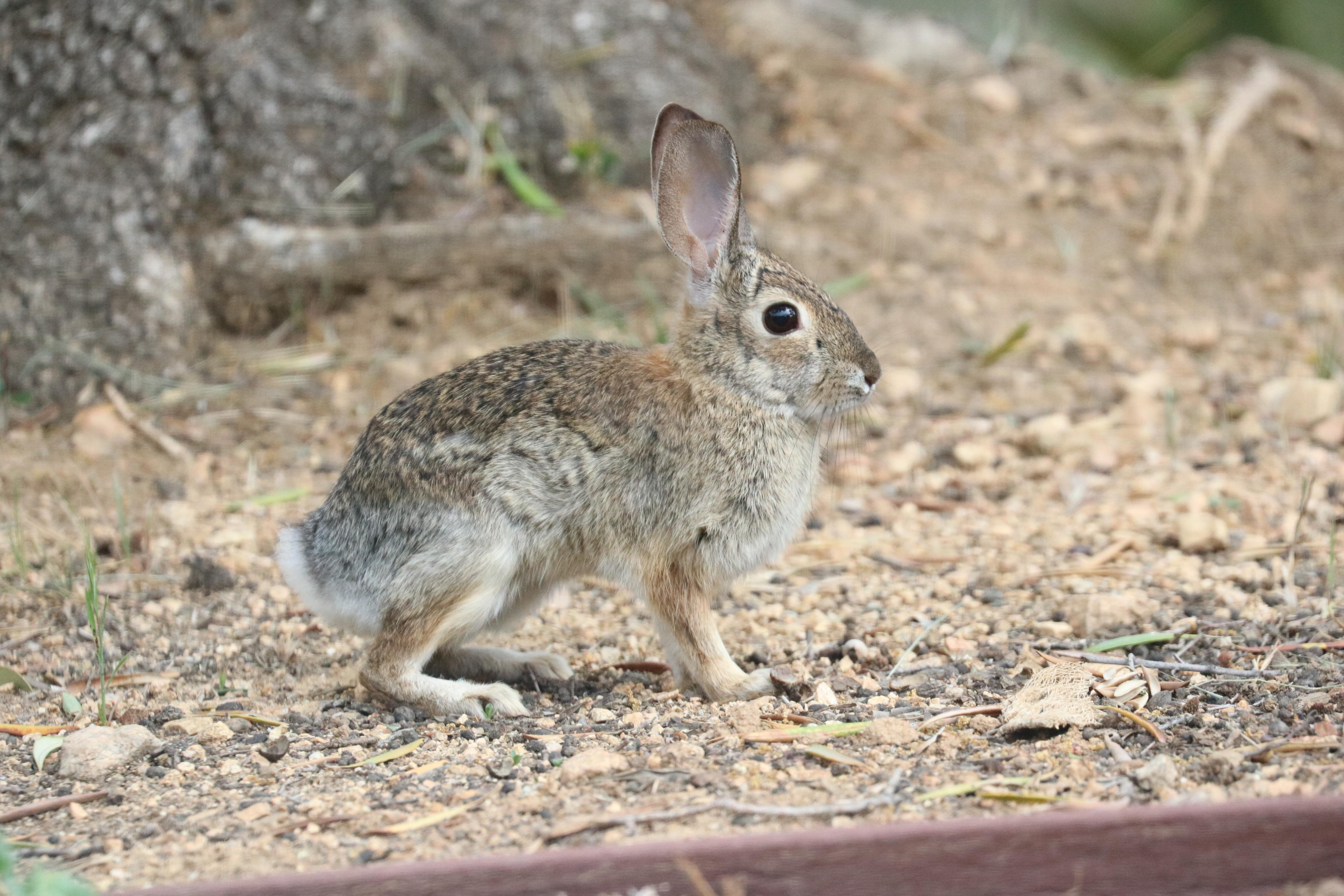 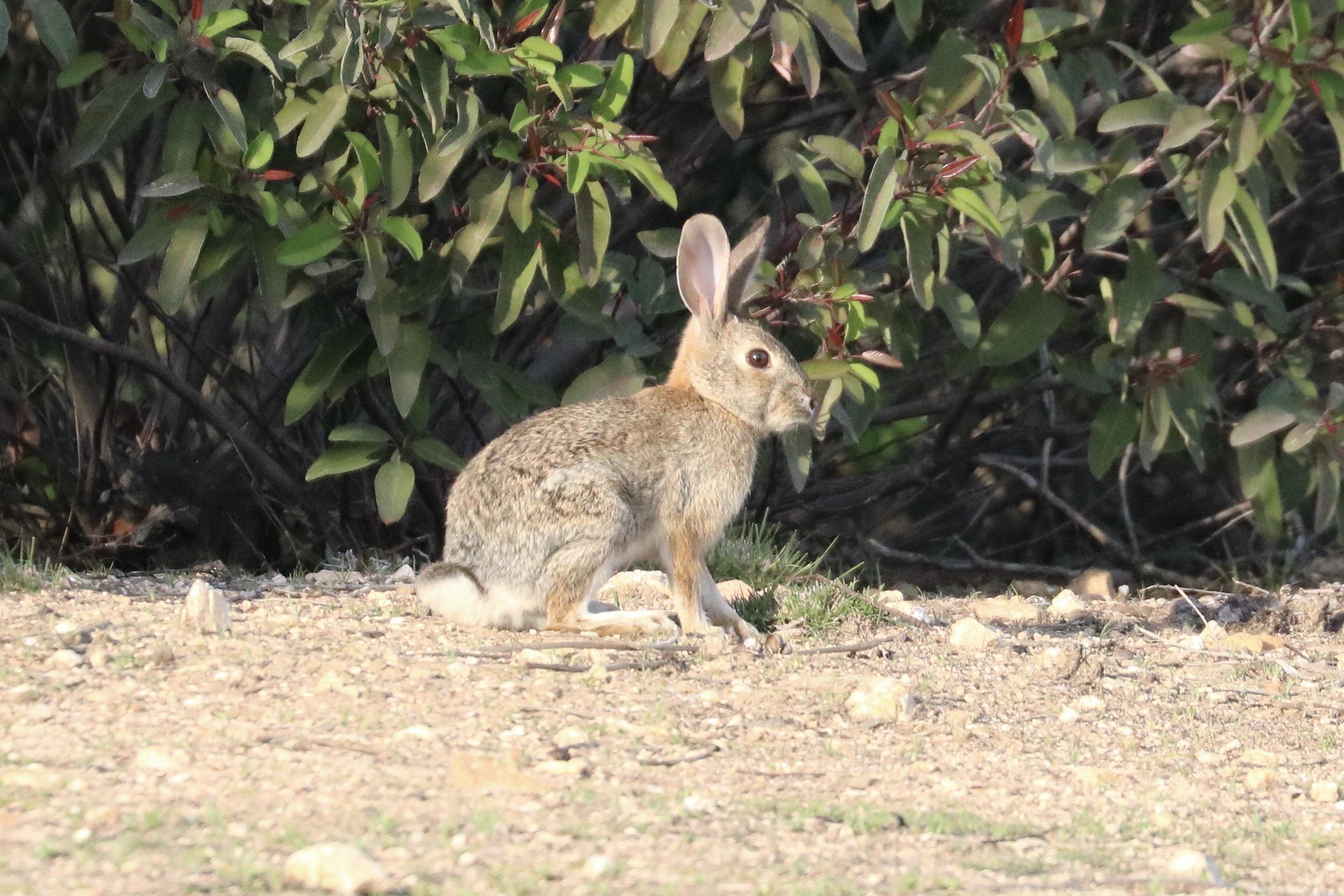 They’re pretty close to the Audubon’s cottontail in appearance, but the latter have black-edged ears as the most prominent distinguishing feature. Their behaviors are very different, though. The Audubon’s cottontail forages out in the middle of the wide-open meadow behind my office, while the brush rabbit never strays more than a few feet from the edge of the chaparral and is quick to dart back into its dense brush at any sign of danger.

Moving up the size scale, I get frequent nocturnal visits from striped skunks (Mephitis mephitis)—which I know about via a motion-sensitive camera, fortunately not via odor! But this was a rare daytime visitor. It was evidently lame in one of its front legs, but still moved through the yard with some alacrity. 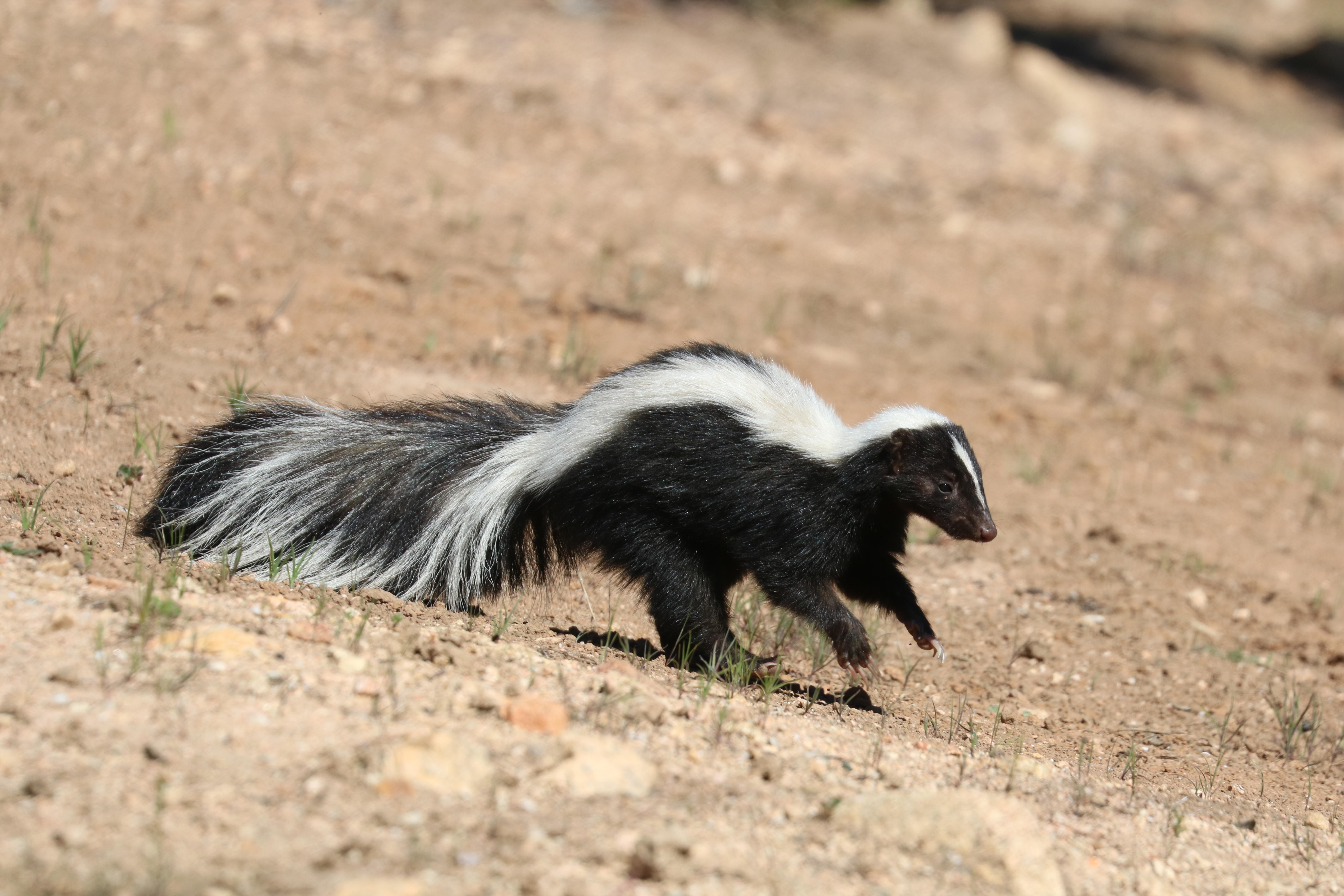 Although foxes, coyotes, and bears have all been visitors in the past, the most common large-ish predator is the bobcat (Lynx rufus). While I don’t have quite the fascination with felines of our host, I find these kitties to be magnificent, and am happy for their frequent visits. 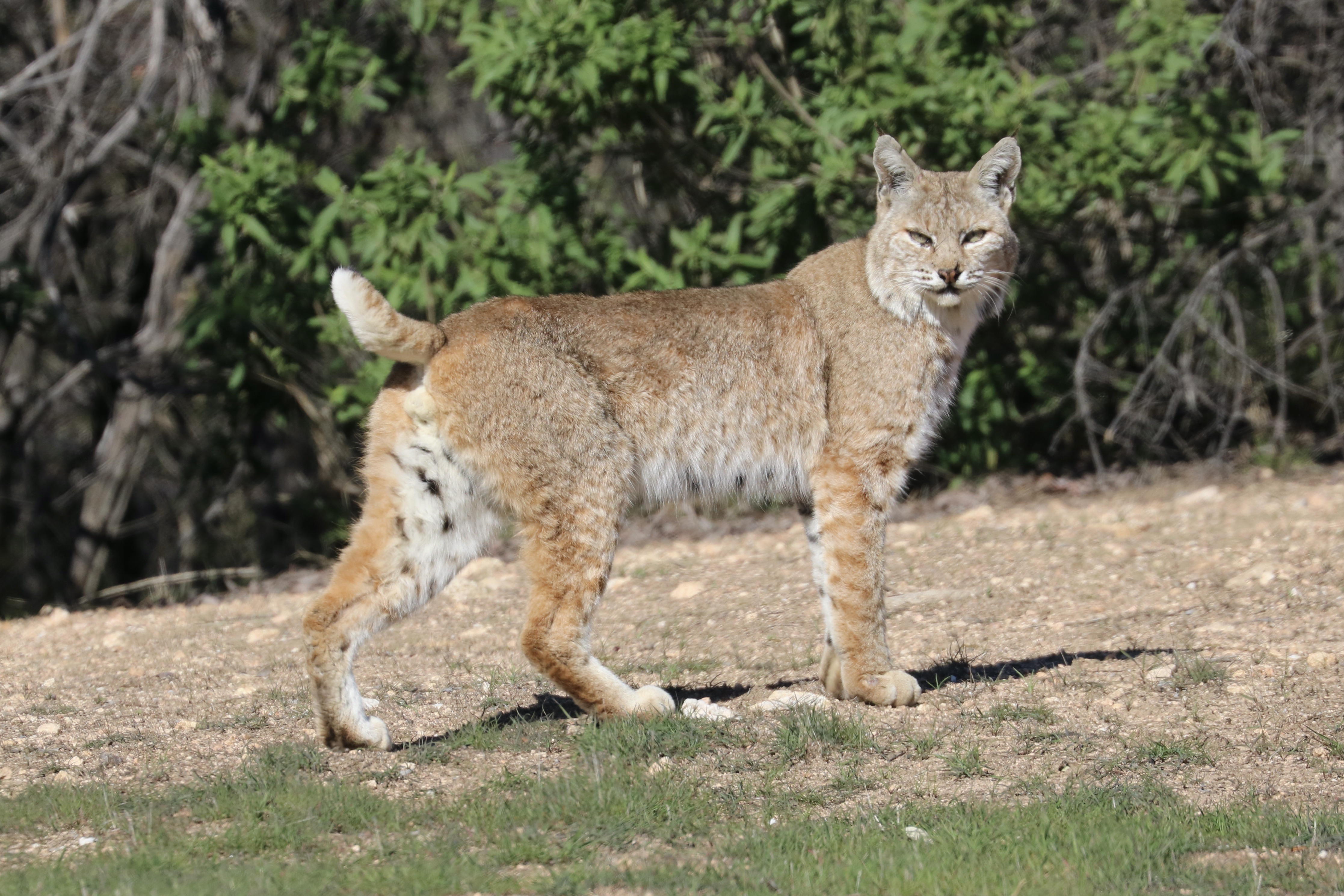 That’s it for the reptiles and mammals. Coming next: birds.