The 2022 Nobel Prize for Literature has been awarded to French writer (and literature professor) Annie Ernaux, already laden with awards. I’d never heard of her, and those who informed me of this award hadn’t, either. I wondered if her books haven’t been translated into English, but it turns out that many of them have been, including The Years, mentioned by the NYT below.

Nobody guessed her in our October 4 contest, so the losing streak there continues, despite people being asked to guess just one winner. Many guessed Salman Rushdie, and I agree that he deserves a Nobel, but the  Committee surely knows what would happen if he was given that prize. But if that’s the reason he hasn’t won, they are cowards.

At any rate, it’s time for you  literature mavens to give Ernaux a try.

Here’s the announcement from the Swedish Academy (click to read): 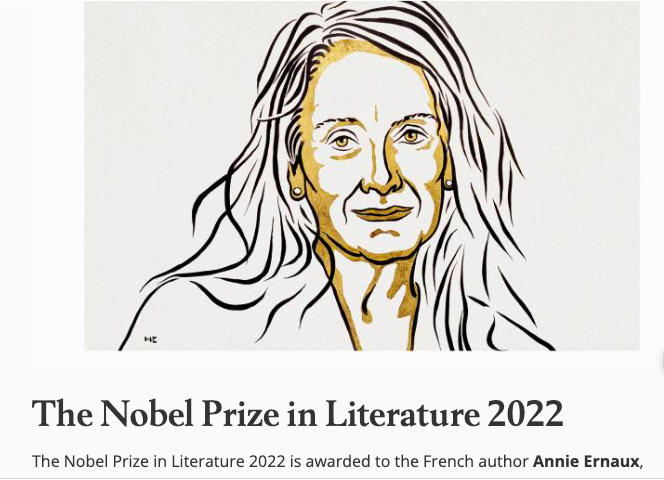 The citation and press releases are very short, saying just this:

The Nobel Prize in Literature for 2022 is awarded to the French author Annie Ernaux “for the courage and clinical acuity with which she uncovers the roots, estrangements and collective restraints of personal memory”.

In her writing, Ernaux consistently and from different angles, examines a life marked by strong disparities regarding gender, language and class. Her path to authorship was long and arduous.

I presume the video below will tell you more as does this NYT article (click to read):

The announcement was made with her having heard of it! From the NYT:

The Nobel Prize in Literature was awarded on Thursday to Annie Ernaux, the French novelist whose intensely personal books have spoken to generations of women by highlighting incidents from her own life, including a back-street abortion in the 1960s and a passionate extramarital affair.

Mats Malm, the permanent secretary of the Swedish Academy, which that decides the prize, announced the decision at a news conference in Stockholm, lauding the “courage and clinical acuity with which she uncovers the roots, estrangements and collective restraints of personal memory.”

The committee had not been able to reach Ernaux by telephone, Malm said, but he expected her to “soon be aware of the news.” They intended to present her with the prize on Dec. 10.

Ernaux, 82, becomes only the 17th female writer to have won the prize, widely considered the most prestigious award in world literature, since it was formed in 1901. She is the second woman to be given the prize in three years after Louise Glück, who was awarded the 2020 prize for writing “that with austere beauty makes individual existence universal.”

. . . Outside France, she is perhaps best known for “The Years,” which weaves together events from over 70 years of Ernaux’s life with French history. In 2019, “The Years” was shortlisted for the Booker International Prize, a major British award for fiction translated into English.

And the 42-minute live announcement:

6 thoughts on “Annie Ernaux nabs Nobel for Literature; nobody won our contest”