Three physicists working independently, from France, the U.S., and Austria, have nabbed this year’s Nobel Prize in Physics for work on quantum entanglement. (Note the international character of the awardees.) All three share equally in the prize, a total of ten million Swedish kroner (about $1.3 million US. It’s not a munificent amount, but the value to one’s career an esteem in inestimable. The winners will henceforth always be designated as “Nobel Laureate [name here].”

What did they win for? Well, you can read about it at either the Nobel press-release site (below) or the NYT article below that; click on either to read. Trigger warning: quantum physics! The award has to do with quantum entanglement, a phenomenon that I can barely understand but that Einstein dismissed as “spooky action at a distance.” Beyond that, even the physicists who wrote me about this don’t fully understand the accomplishment that was honored, for which entanglement is just the starting point. 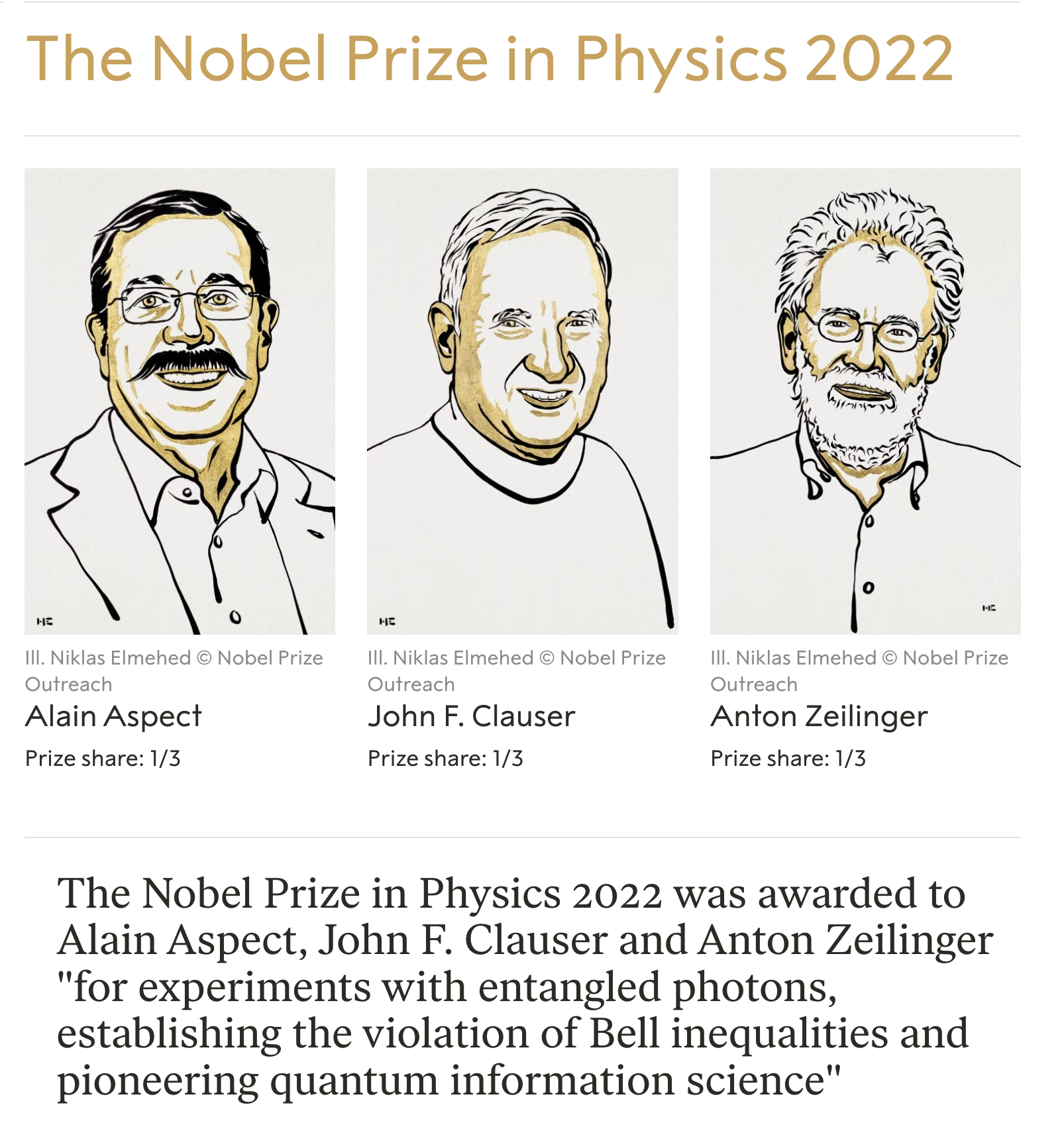 A summary from the NYT with a good explanation of entanglement (I’ve put it in bold below):

The Nobel Prize in Physics was awarded to Alain Aspect, John F. Clauser and Anton Zeilinger on Tuesday for work that has “laid the foundation for a new era of quantum technology,” the Nobel Committee for Physics said.

The scientists have each conducted “groundbreaking experiments using entangled quantum states, where two particles behave like a single unit even when they are separated,” the committee said in a briefing. Their results, it said, cleared the way for “new technology based upon quantum information.”

The laureates’ research builds on the work of John Stewart Bell, a physicist who strove in the 1960s to understand whether particles, having flown too far apart for there to be normal communication between them, can still function in concert, also known as quantum entanglement.

According to quantum mechanics, particles can exist simultaneously in two or more places. They do not take on formal properties until they are measured or observed in some way. By taking measurements of one particle, like its position or “spin,” a change is observed in its partner, no matter how far away it has traveled from its pair.

Working independently, the three laureates did experiments that helped clarify a fundamental claim about quantum entanglement, which concerns the behavior of tiny particles, like electrons, that interacted in the past and then moved apart.

And the accomplishments of the three, also from the NYT:

Dr. Clauser, an American, was the first in 1972. Using duct tape and spare parts at Lawrence Berkeley National Laboratory in Berkeley, Calif., he endeavored to measure quantum entanglement by firing thousands of photons in opposite directions to investigate a property known as polarization. When he measured the polarizations of photon pairs, they showed a correlation, proving that a principle called Bell’s inequality had been violated and that the photon pairs were entangled, or acting in concert.

Clauser looks as if he won it for demonstrating the phenomenon of entanglement fifty years ago, but, according to Wikipedia, entanglement of photons was experimentally demonstrated in the year I was born.

The first experiment that verified Einstein’s spooky action at a distance or entanglement was successfully corroborated in a lab by Chien-Shiung Wu and a colleague named I. Shaknov in 1949, and was published on new year’s day in 1950. The result specifically proved the quantum correlations of a pair of photons.

Wu won the Nobel Prize for that, but what was entangled was “parity,” not “polarization” (several aspect of photons’ properties are entangled). But Wu and her colleague’s experiments seem to have demonstrated the violation of Bell’s inequality in 1949.

The research was taken up 10 years later by Dr. Aspect, a French scientist, and his team at the University of Paris. And in 1998, Dr. Zeilinger, an Austrian physicist, led another experiment that considered entanglement among three or more particles.

Eva Olsson, a member of the Nobel Committee for Physics, noted that quantum information science had broad implications in areas like secure information transfer and quantum computing.

Quantum information science is a “vibrant and rapidly developing field,” she said. “Its predictions have opened doors to another world, and it has also shaken the very foundation of how we interpret measurements.

The Nobel committee said the three scientists were being honored for their experiments with entangled photons, establishing the violation of Bell inequalities and pioneering quantum information science.

“Being able to manipulate and manage quantum states and all their layers of properties gives us access to tools with unexpected potential,” the committee said in a statement on Twitter.

Two physics mavens who wrote me about this admitted they didn’t fully grasp what the Laureates had shown.

Hell. I don’t even understand the title of the physics area of this year’s award. My days are over!

And the other said this:

Whoooosh … right over my head !  I have absolutely no idea what they are talking about!

Readers are welcome to clarify.  But it’s quantum mechanics, Jake, and if you think you understand its physical interpretation, as Feynman said, you don’t. That’s what’s so fascinating about the area. The math seems to absolutely predict what you see, but to translate the mathematical results into language that corresponds to our everyday experience is nearly impossible.

And our contest, based on the failure of readers to guess who would win all the Prizes in a given year. I’m thus restricting the contest to one prize only. To wit:

The Nobel Prize in Literature will be awarded early Thursday morning (US time). Who will win it?

The first person who guesses the correct answer and puts it below in a post gets an autographed copy of either WEIT or Faith versus Fact, personalized to their liking and with a cat or other animal of their choosing drawn in it by me, PCC(E).

Put your choices below. The contest closes at 8 pm Eastern US time on Wednesday (tomorrow).