Two days ago, Jim Batterson, an old friend and college classmate who worked for NASA for many years, wrote a precis of the DART mission designed to knock a small asteroid out of its orbit around a bigger asteroid.  He and I were two of the many who watched the “near live” impact of the spacecraft on Dimorphos, and we were both thrilled. Here’s the last 18 seconds before impact:

Here, from Facebook, is a telescopic view from Earth of the moment the spacecraft hit Dimorphos (credit: Atlas Project):

After I mentioned to Jim that this was the first time we tried to perturb an orbit with a spacecraft, he sent me his thoughts on the mission and reminded me of a few instances of other impacts or landings on celestial bodies, though these didn’t have the same goal as DART.  With his permission I submit Jim’s thoughts for your approval.

Now that the excitement and really spectacular success of the DART asteroid rendezvous and impact is in the rearview mirror, I want to remind readers of some earlier space missions that were akin to DART in an engineering sense.

Much of what NASA does in space missions is “engineering in the service of science”.  That is, NASA scientist and engineers, in consultation with scientists from around the world, are responsible for managing and assuring the design of appropriate missions, building (often unique) scientific instruments, and developing the rockets and spacecraft to fly those instruments to a point in space (sometimes on a planet or simply in a planetary atmosphere) where collected data is returned for analysis to scientists on Earth.  Comet rendezvous missions are traditionally “pure science” missions to gather unique data on the composition of comets, as it’s thought that a better understanding of comets will lead to a better understanding the formation and early years of our solar system.

DART was a different type of mission, not only in its focus on an asteroid rather than a comet, but also in that it kept its engineering mission for planetary defense pretty clean and did not try to add in a large suite of scientific instruments to gather data.  That said, there have been several comet flybys over years and two comet impacts

The impacts were these:

Deep Impact by NASA/Jet Propulsion Lab (JPL). Upon rendezvousing with the Comet Temple-1 on July 4, 2005, the Deep Impact spacecraft launched an impactor craft that smashed into the comet’s nucleus.  The debris cloud and crater were then photographed and analyzed by instruments on the mother ship. Here’s a NASA photo with this caption:

This spectacular image of comet Tempel 1 was taken 67 seconds after it obliterated Deep Impact’s impactor spacecraft. The image was taken by the high-resolution camera on the mission’s flyby craft. Scattered light from the collision saturated the camera’s detector, creating the bright splash seen here. Linear spokes of light radiate away from the impact site, while reflected sunlight illuminates most of the comet surface. The image reveals topographic features, including ridges, scalloped edges and possibly impact craters formed long ago.

The Rosetta/Philae mission was carried out by the European Space Agency (ESA) in 2014. Upon rendezvous with Comet 67P after an almost eleven-year journey through space, the Rosetta spacecraft launched a lander (Philae) whose purpose was to soft-land on the comet and drill into its surface, gathering data on the comet’s interior. ESA was partly successful as Philae did make it to the surface. But some of its propulsion equipment failed to operate properly to slow it down completely, so it suffered a hard landing and bounced, leaving Philae in a crevice. This prevented it from accessing sunlight needed to recharge its batteries.  Sadly, the subsurface data couldn’t be collected.

However, it did survive to take some incredible photos on the actual surface of a comet nucleus. I think that this was still an extraordinary accomplishment. You can see the photos here.

[JAC: I’ll present one example, a fantastic selfie taken by Philae as it sat in the crevice. The caption is

“The Philae lander of the European Space Agency’s Rosetta mission is safely on the surface of Comet 67P/Churyumov-Gerasimenko, as these first two images from the lander’s CIVA camera confirm. One of the lander’s three feet can be seen in the foreground. The view is a two-image mosaic taken on Nov. 12, 2014.”] 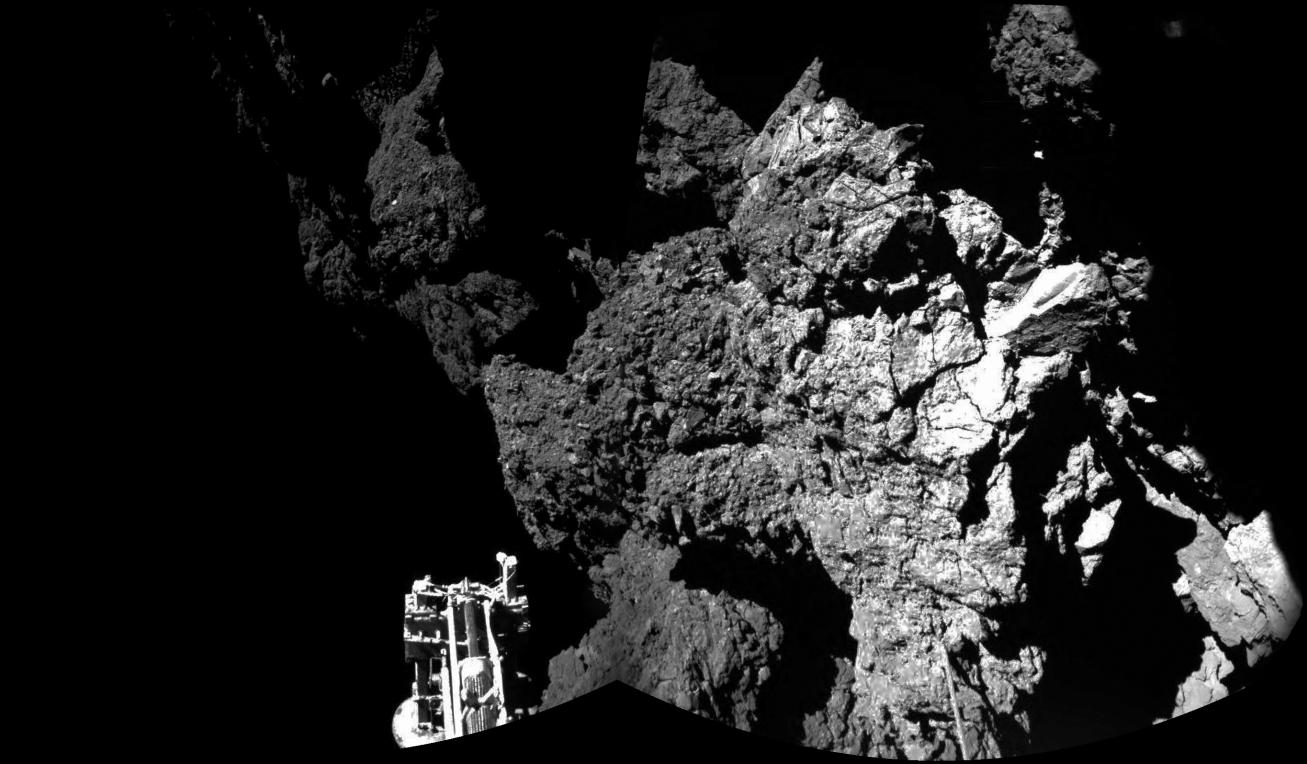 DART didn’t even pretend to be about collecting basic science data, but rather was about using engineering expertise developed over our spacefaring years to help the protect our planet. This was an important proof of a “concept mission” in which the concept was that, if an asteroid were given a proper nudge, its trajectory could be changed enough to move it from a collision course with Earth to a harmless close encounter. This was a test or experiment to gather engineering data. It is a high-school physics problem to show that it works in theory, but would it work in the real world?

I think that one of big engineering challenges for the DART test was navigating and guiding using the light from the two-asteroid system and then, a few minutes before scheduled impact, to autonomously focus on and keep the smaller, dimmer asteroid as its target.  This was especially challenging because the engineers had no real knowledge of the reflective characteristics or shape of either body. It turned out, as we all saw in the final couple of minutes of approach, that both bodies were non-spherical with lots of surface irregularities, which scatter sunlight in all directions and cast shadows. But the software had been designed with enough robustness to deal with these non-ideal bodies.