Note: because I have several items to bring to your attention, the “readers’ wildlife post” will be suspended for today, but will resume tomorrow.

Today—to be precise, at 7:14 p.m. EDT (6:15 Chicago time)—is the day that the DART mission (Double Asteroid Redirection Test) culminates in a NASA spacecraft, launched last November, crashing into a small asteroid in orbit around a longer one. The goal, as my friend Jim Batterson writes below, is to see if humans even have the ability to deflect an asteroid, comet, or any smallish body heading for a collision course with Earth. (This asteroid isn’t on a collision course; this is just a test.) If you want to see the upshot, I recommend going online at least fifteen minutes at the time given above. (Actually, you should be able to see a small image of the asteroids an hour before the crash.) The the news of the mission’s success or failure will take about 45 seconds to reach the earth, as the signal must travel 7 million miles at the speed of light.  The link you want to watch is at the bottom as an embedded YouTube video.

I am absolutely amazed that we can even try to do this, especially because the collision is guided automatically rather than manually (see below) and was calculated precisely using Newtonian physics. And note the asymmetry of the collision: as the Associated Press reported:

“This really is about asteroid deflection, not disruption,” said Nancy Chabot, a planetary scientist and mission team leader at Johns Hopkins University’s Applied Physics Laboratory, which is managing the effort. “This isn’t going to blow up the asteroid. It isn’t going to put it into lots of pieces.” Rather, the impact will dig out a crater tens of yards (meters) in size and hurl some 2 million pounds (1 million kilograms) of rocks and dirt into space.

The size of a small vending machine at 1,260 pounds (570 kilograms), the spacecraft will slam into roughly 11 billion pounds (5 billion kilograms) of asteroid. “Sometimes we describe it as running a golf cart into a Great Pyramid,” said Chabot.

Jim “Bat” Batterson is an old college friend who worked for NASA for many years and has kept me informed about the DART mission. He kindly offered to summarize the mission for me, and the indented bit below is what he wrote. Thanks, Bat!

The DART (Double Asteroid Redirection Test) is scheduled to be completed today, September 26, 2022, at 7:14 PM EDT. DART is an international space mission led by NASA and the Johns Hopkins Applied Physics Laboratory. Its mission is carry out the first in situ test of the theory that an asteroid on a collision course with the Earth can be deflected by the momentum of an impacting spacecraft into a new trajectory that will miss Earth.

This test involves spacecraft hitting a near-Earth asteroid that is NOT on a collision path with Earth. The impacting spacecraft has been journeying toward the double asteroid system, Didymos and its moonlet Dimorphos, since its November 2021 launch from Vandenberg AFB in California.  The target, Dimorphus, the smaller of the two asteroids, is about 500 feet across. The impact will occur approximately 7 million miles from Earth, so pictures and data should be available in near real-time.  A smaller companion spacecraft is programmed to miss the asteroid and and to try to photograph the impact.

The path over the past 10 months to a rendezvous millions of miles from Earth has involved yet another extraordinary engineering effort to guide a spacecraft through the perturbing effects of gravity from planets and the varying solar wind in the otherwise benign vacuum of space.

NASA has been following Near-Earth Objects in space for many years to prepare for any genuine predicted impact and to ensure that humans in space are not threatened by these objects.  Part of the NASA research program has also included determining whether redirecting a certain size-class of objects that might be on an Earth-intersecting trajectory—and which could cause catastrophic harm if they were to impact Earth—by hitting the object with a spacecraft while the object is still far away from Earth. The large distance allows a small change in trajectory of the target to result in missing Earth by a wide shot.

While mathematical models and simulations have been very encouraging over the years, DART is the first actual in situ physical test of the theory.  The theory is just simple Newtonian mechanics—much like the strategy of billiards in which a ball is hit into another ball and both balls change speed and direction.  But in the DART experiment, one ball, the asteroid, is 8 million times more massive than the other. This is much like trying to change the trajectory of a bowling ball by impacting it with a grain of sand.  Because the amount of change in direction depends on not just the masses, but rather on the momentum (the product of mass times velocity), the smaller object (the spacecraft) must be moving very fast to impart any significant momentum to the asteroid.  That will be the case tonight as the refrigerator size, 1000 lb. craft will crash into the asteroid at ~15,000 MPH!

The last human input guiding the spacecraft will occur about four hours before scheduled impact. That’s when when the image of the asteroid gets centered in the field of the craft’s onboard digital camera by ground controllers using hydrazine thrusters for orientation.  Because the craft is closing in on the asteroid at about 4 miles per second, and it takes the better part of a minute for a round trip of a radio signal between Earth and the spacecraft, from that point on the DART craft maneuvers totally autonomously using its hydrazine thrusters to keep the target image centered in the camera’s field of view..  We should see pictures taken from that camera during descent as well from a companion spacecraft designed photograph the impact and any post-impact disturbances at and above the surface of the asteroid.

I don’t know if these raw data images will be made available to the public in near real time or only after some image processing.  Any resulting momentum change will be detected by a change in orbit characteristics for the twin asteroid system as calculated from Earth-based observations.

The latest information I have (as of September 25) is that impact should occur at 7:14 PM EDT on Monday, September 26.  The mission is scheduled to be covered live on NASA TV starting at 6:00 PM EDT.  Go to NASA TV at https://www.nasa.gov/nasalive, or just click below [JAC: check the news in case there is any change in time, though I don’t expect one.]

You can see pretty complete background information  at scitech.

Finally, Jim wanted me to give this caveat about what he said, and adds that he welcomes any corrections:

I think this is pretty close to being correct, but I was more of an airplane/spaceplane guy – not an orbital or outer-space guy. So You might add the caveat that this is from my study of publicly available mission documents, back of the envelope calculations, and general accumulated knowledge of NASA missions in general from a thirty-year career that ended in 2008.  Without peer review I cannot attest to total accuracy, but as you say: I try my best.

JAC: some pictures from the BBC:

The spacecraft zeroes in: 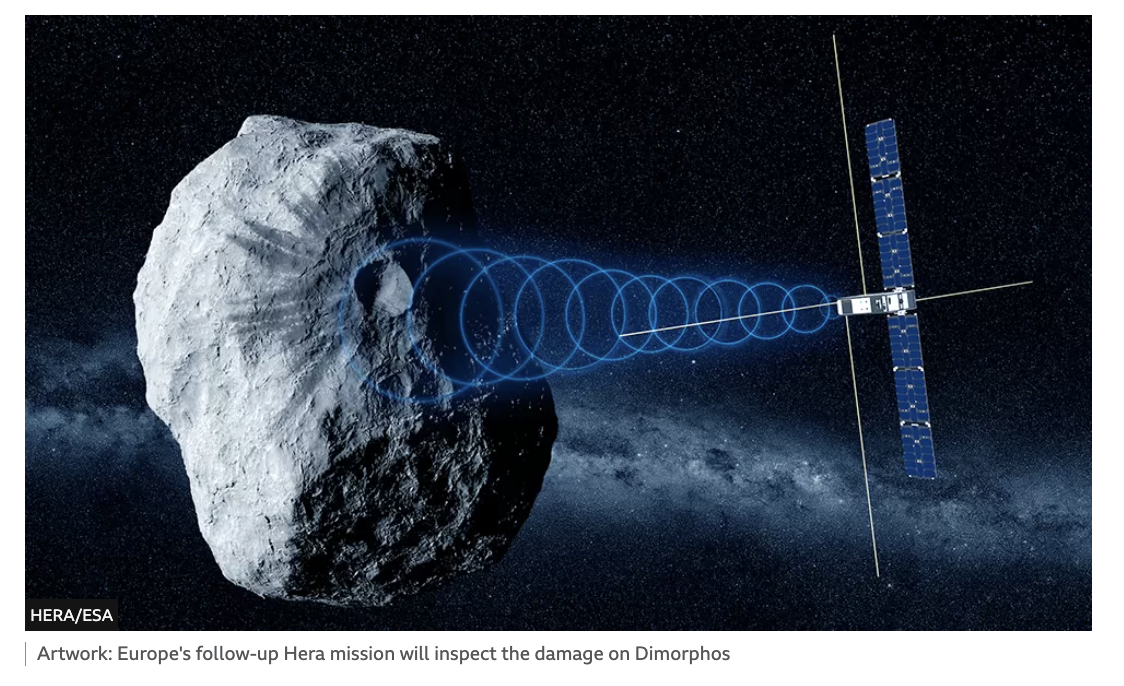 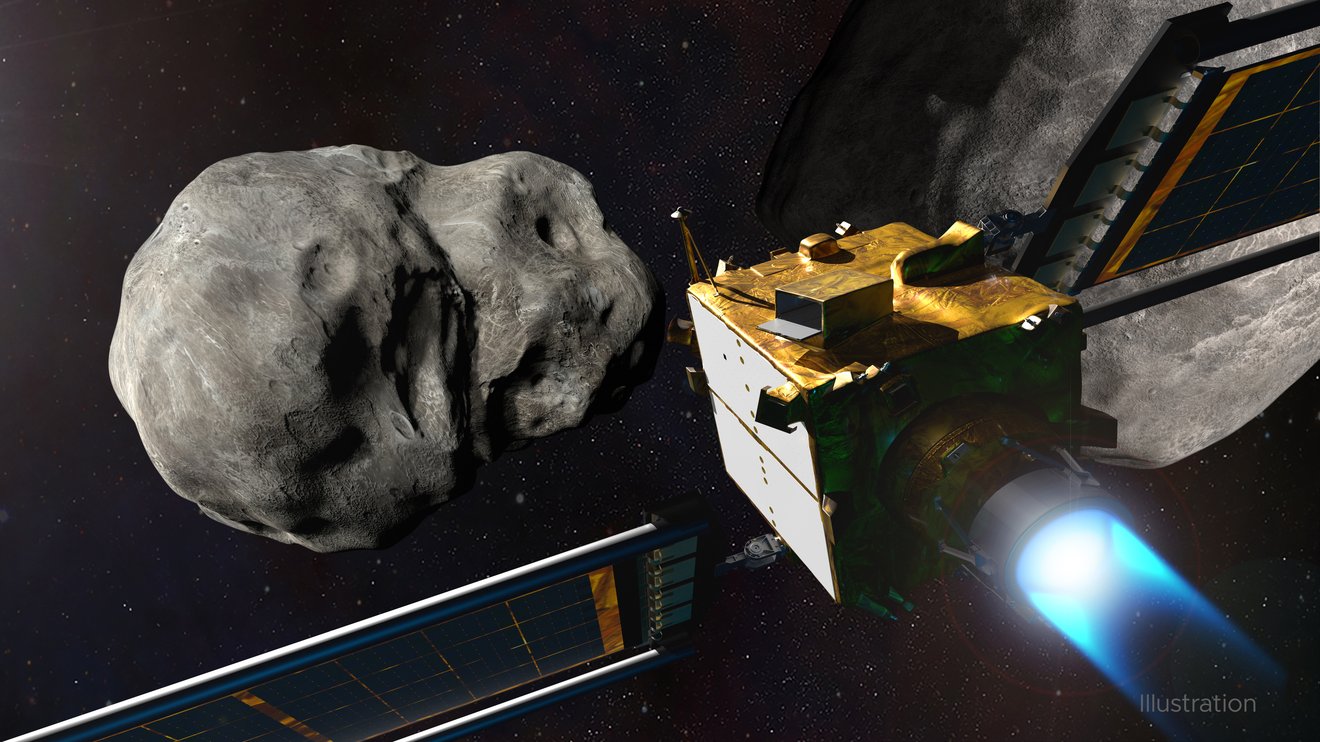 The relative sizes of the target and projectile: 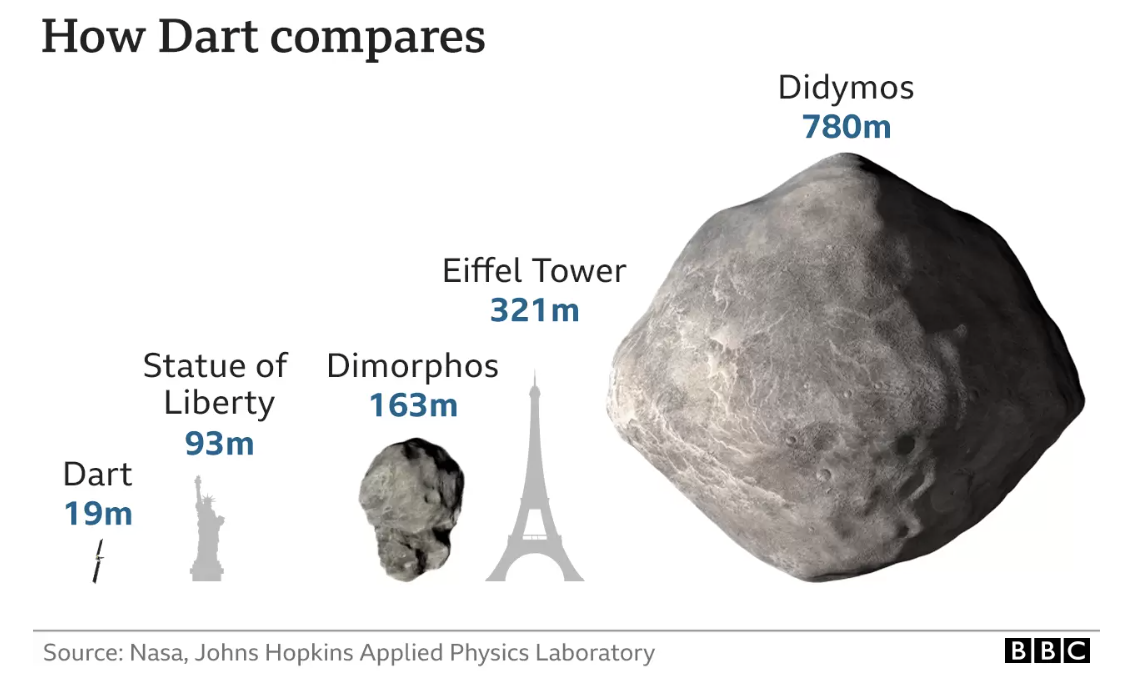 The expected perturbation of Dimorphos’s orbit. Note the accompanying LICA Cube that will photograph the impact (if it occurs). If there’s no impact, there will be a second chance later as the DART craft returns. The AP notes that “Little Dimorphos completes a lap around big Didymos every 11 hours and 55 minutes. The impact by Dart should shave about 10 minutes off that.” 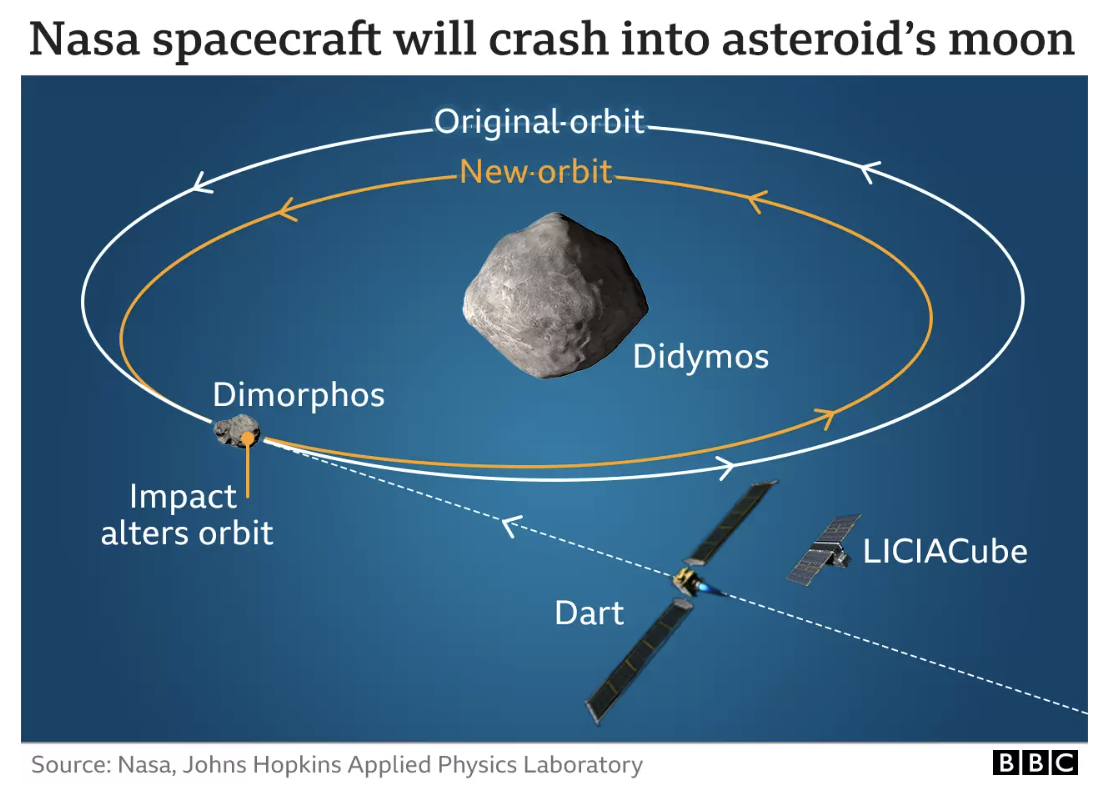 Here’s a four-minute video about the mission and how scientists will watch the impact and measure its effect:

Finally, a short AP film that starts with November’s launch:

22 thoughts on “The DART mission: A U.S. spacecraft will hit an asteroid this evening (7:14 EDT), trying to change its orbit”