In short, what happened is that on November 9, 2016, proprietor Allyn Gibson caught a few Oberlin students, one of whom was black, shoplifting wine (and also trying to buy more booze with fake IDs. Trying to apprehend the thief, a younger Gibson, Allyn (not the one mentioned below) got involved in a scuffle, with several Oberlin students beating and kicking him on the ground. The three students later pleaded guilty.

Because there was race involved, Oberlin administrators, as well as students, framed this as some kind of racist attack by Gibson’s, and instead of keeping silent, which is what they should have done, the administrators encouraged (legal) student protests against the bakery, stopped doing business with it, and defamed it. The administration also used College money to buy food and supplies for the student protestors. The protests, of course, were on the grounds of racism, though Gibson’s had no history of racism and a black employee said he’d never seen any.

My posts contain some of the emails between Oberlin administrators that were introduced as evidence, and they’re pretty damning. Have a look at this post to see how hard Oberlin dug in its heels, and how intemperate they were.

All this, of course, occurred despite the students’ admission of guilt.

Originally, Gibson’s just wanted an apology, but when they got attacked by Oberlin instead, they sued the college in 2017 for “libel, slander, interference with business relationships, and interference with contracts.” They won the civil suit: the jury, obviously fed up with the College, awarded Gibson’s $11 million in compensatory damages and $33 million in punitive damages. That’s a cool $44 million—a big nut for the College. The judge later reduced the award to $25 million but tacked on another $6.5 million for legal fees. As I recall, Oberlin had to post bond for that amount if it appealed, which it did in 2020.

The Gibsons also appealed over the monetary damages and the exclusion of witnesses.  The judges affirmed the lower court ruling against Oberlin; as Wikipedia notes,

In a 3-0 decision, the panel upheld the jury verdict that Oberlin College defamed, inflicted distress, and illegally interfered with the bakery. The damages were capped by Ohio state law at $25 million in total damages, in place of the jury’s original verdict of $11.1 million in compensatory and $33.2 million in punitive damages. Oberlin was also ordered to pay $6.3 million in attorney’s fees to the bakery

Oberlin wouldn’t give up, even though it was losing students because of its behavior, and also stood to lose money as interest mounted on the amount of the fine. They appealed to the Supreme Court of Ohio, and yesterday the judgment came down.

It is below: the Supreme Court refused to hear the appeal. GIbson’s won!

The decision was 4-3, and the Gibsons were awarded $36 million. That’s a lot of dosh for a small school, and represents a lot of scholarships that could have been awarded had the chowderheads at Oberlin just apologized in the first place. 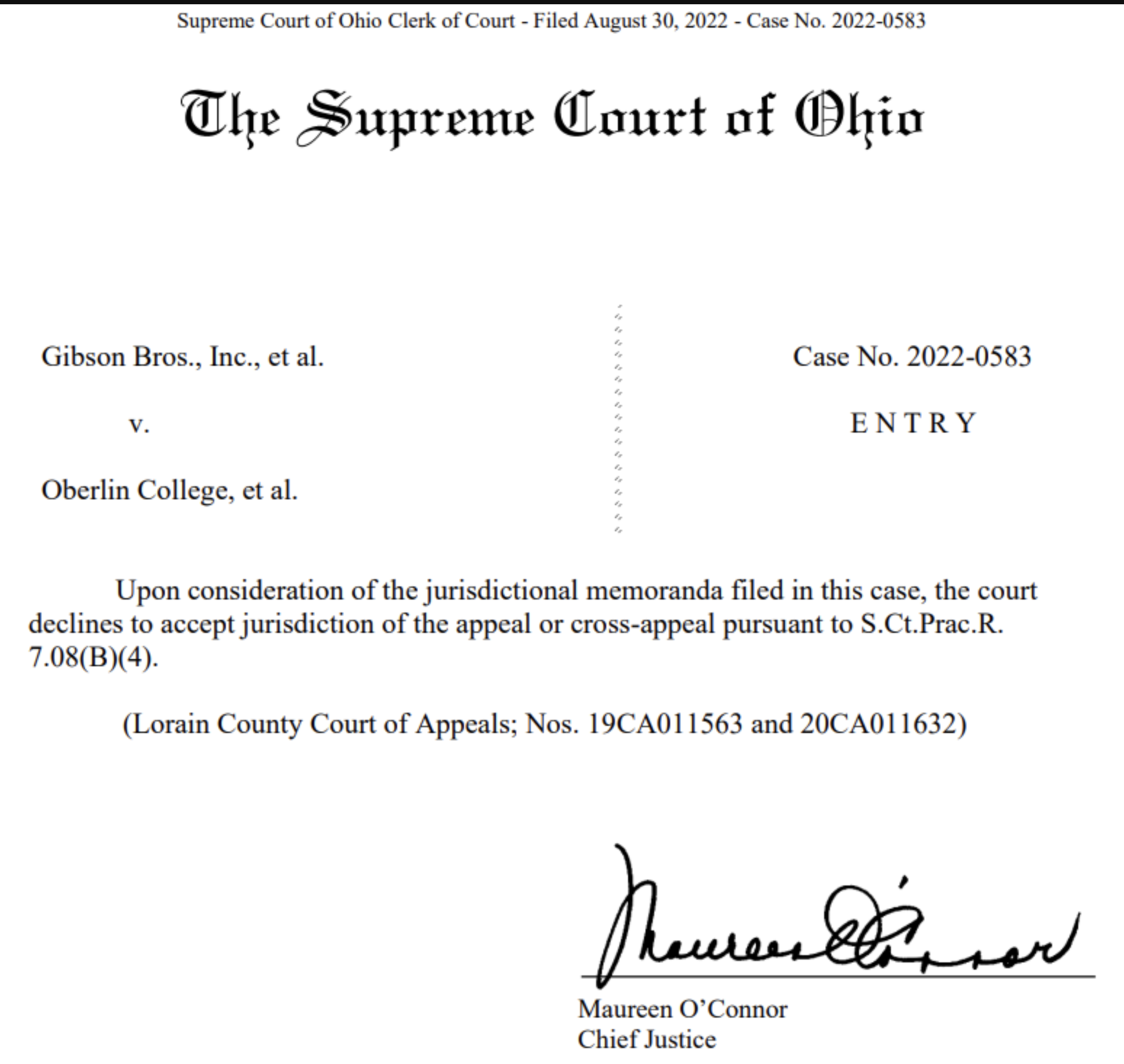 It’s all over; the Fat Lady has sung. Oberlin is an ex-reputable college, singing with the Choir Invisible. In the article below (click on screenshot), the site Legal Insurrection, which has consistently and accurately covered the whole issue, describes the swan song:

There’s not much more to report except for the statements of the victors. The first is from Lee Plakas, lead trial counsel for the Gibsons:

On behalf of the Gibson family and the trial team, Truth Still Matters, David can still overcome Goliath.

We and the Gibson family are gratified that all judges on the court of appeals and the majority of the Ohio Supreme Court recognized the rights of individuals rather than the bullying tactics of the big institutions.

And here are quotes “from the Gibsons and the trial team”:

“Oberlin tried to frame this case with claims and issues that weren’t on trial. This has never been a case about a student’s first amendment rights. Individuals’ reputations should never be sacrificed at a false altar of free speech. The Gibsons and the entire State of Ohio should appreciate that the jury, a unanimous Ninth District Court of Appeals, and a majority of the Justices on the Ohio Supreme Court recognized that the deplorable conduct of Oberlin College could not be camouflaged by misleading claims of free speech.”

“The jury recognized Oberlin College’s bullying tactics. The students admitted their misconduct, but Oberlin College could never admit that they were wrong. They presumed that they could bring the Gibsons to their knees. The power of truth has enabled the Gibson family to survive Oberlin’s onslaught.”

We reached out to Oberlin College for comment, but have not yet received a response.

They will wait a long time!

As far as I know, this exhausts Oberlin’s options. Sadly, Allyn Gibson, the real victim, who was beaten up, didn’t live to see this day:  he died in February of this year. Here’s a photo of the Gibsons after one of their victories. Allyn is in the center with the walker. He and the bakery were much beloved by the community, which may be one reason why the punitive damages were so high.

The lesson for Oberlin is clear: in the words of Davy Crockett: “Be always sure you’re right — THEN GO AHEAD!” Oberlin knew that the students were guilty of shoplifting and that Gibson’s had no history or reputation for racism, but they still went after the bakery like a pack of rabid wolves. That’s because they thought, I suppose, that because one of the shoplifters was a black student, the College was on the side of the angels by attacking the bakery.

They weren’t. It’s a simply matter of the facts, and a case of a college, marinated in self-styled virtue and delusions of power, going after the Little Guys for no good reason. I savor every penny that Oberlin will have to cough up.

Oberlin, I hardly need to mention, is one of the wokest colleges in America.