This article from Nature Ecology & Evolution is long and complicated, and is filled with technical details about paleontology and systematics, so I’ll just give a very brief summary and refer you to the BBC article below that, which is quite a good description of the paper’s results.  Click on either headline to access the article, and go here to see the pdf of the scientific paper (reference at the bottom).

The paper reports the discovery of an ancient cnidarian, a relative of modern jellyfish, in an Ediacran fossil bed, located in Charnwood forest in Leicestershire, and dating about 560 million years ago. That was before the Cambrian Explosion, and some of the fossils in that bed don’t resemble any ancient animals—in fact, we don’t even know if they’re animals.

This one, however, appears to be a progenitor (“crown group fossil”) of modern Cnidarians, a living phylum that includes jellyfish, corals, and an obscure parasite. And the fossil, named Auroalumina attenbroughii (after David Attenborough), appears to be in the subphylum Medusozoa, which comprises mostly jellyfish and a few other bits and bobs. Nearly all Medusozoans begin life with a sessile stage affixed to the substrate, and then form free-swimming “medusas” that are the adult, sexual stage. They are all predators, catching prey with stinging tentacles.

This, then, would be the earliest predator known to us from the fossil record.

The fossil, shown below from the paper and then in a reconstruction, is identified by Dunn et al. as the sessile stage of medusozoans, before the free-swimming stage is formed. It consists of two “goblets” with tentacles, fastened together by a stem. It resembles modern species, and phylogenetic analysis of its traits make it likely that this was in the “crown group” of cnidarians—that is, it is closely related to the ancestor of all living cnidarians. This shows that the group existed in the Ediacaran—before the Cambrian explosion. As I’ve said, this makes it the earliest identified predator in the fossil record.

Here are the impression fossils and their outline in a BBC illustration:

An interpretation from the paper.  The goblet-structure is about 20 cm long, or roughly 8 inches:

An interpretation from the paper as well as the BBC report: 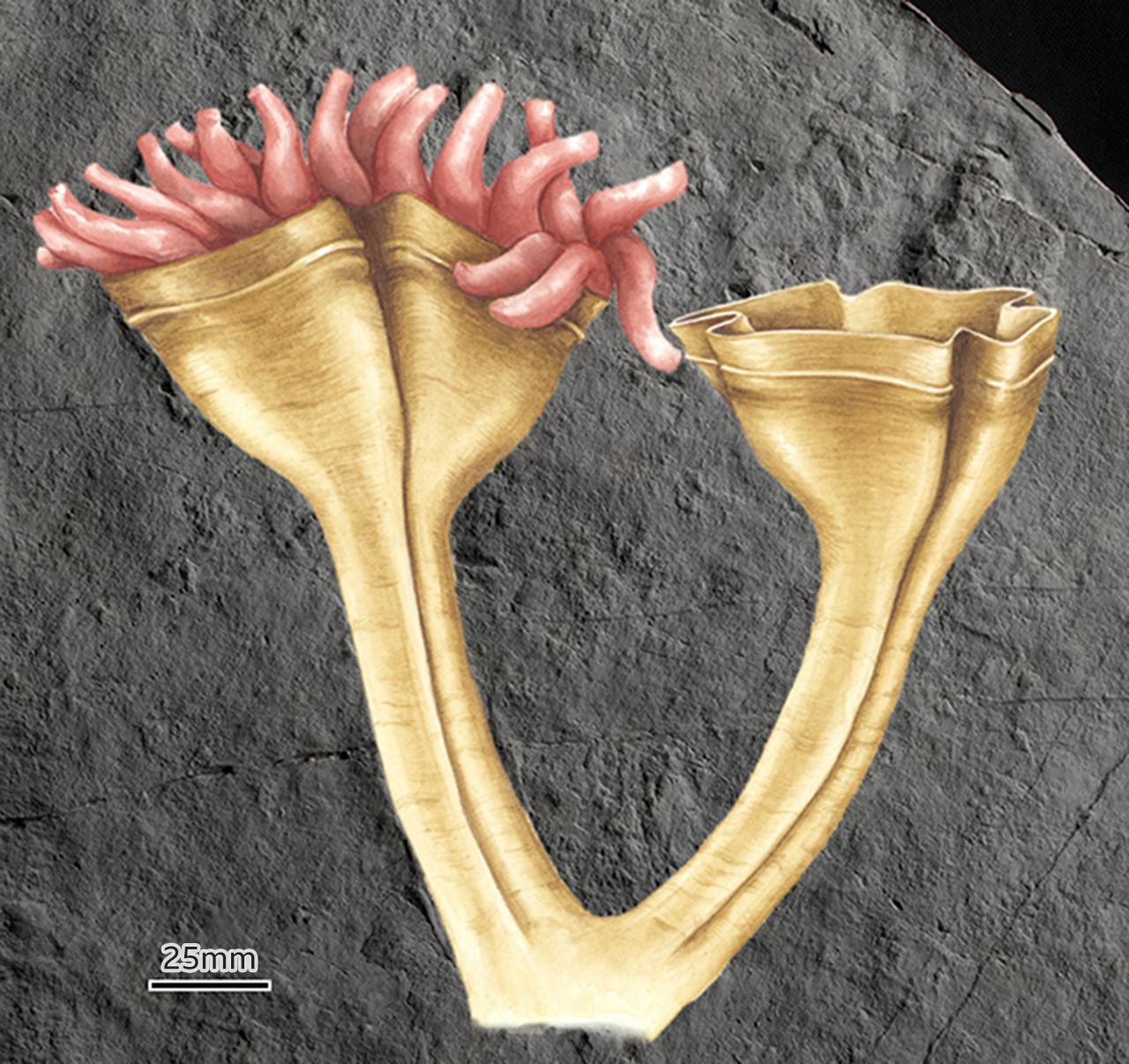 And here’s the specimen right next to the enigmatic Charnia masoni, a frondlike organism from the Edicaran. We don’t have any idea what Charnia is, but it’s more likely to be a sessile animal than a plant, and whether it evolved into groups that are still with us, or went extinct without issue, is debated among paleontologists. We’re much surer about A. attenboroughii! 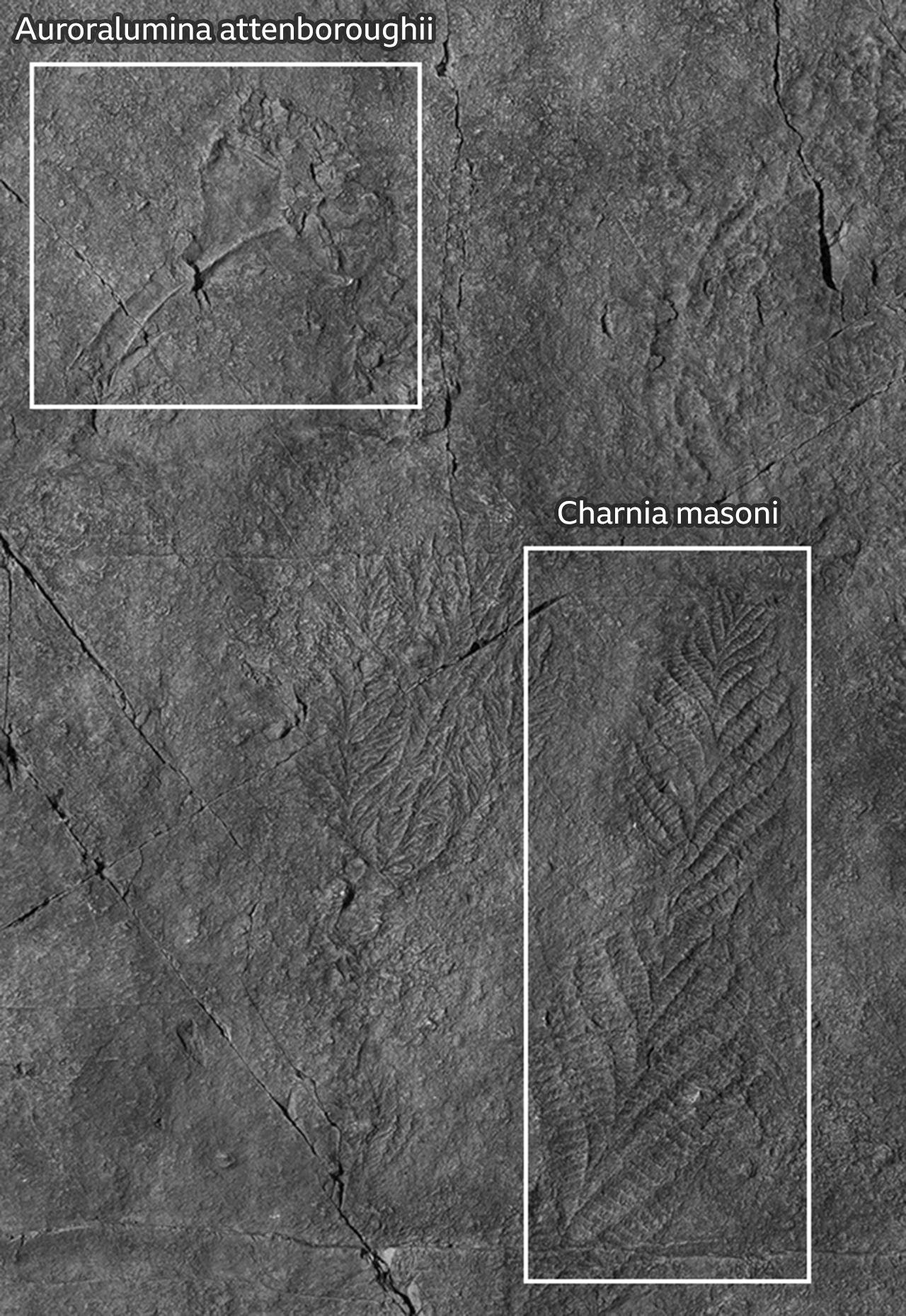 Charnia is famous as the very first fossil found in rocks that were Precambrian; below is a reconstruction from Wikipedia. The Ediacaran fauna, which lived from 635–538.8 million years ago, remains pretty much of a mystery: it comprises fronds, tubes, and discs, bags, and toroids, none of which we can place phylogenetically.  They disappeared, and either evolved into modern forms around the time of the Cambrian explosion” or more likely, constituted a fauna whose members mostly went extinct. 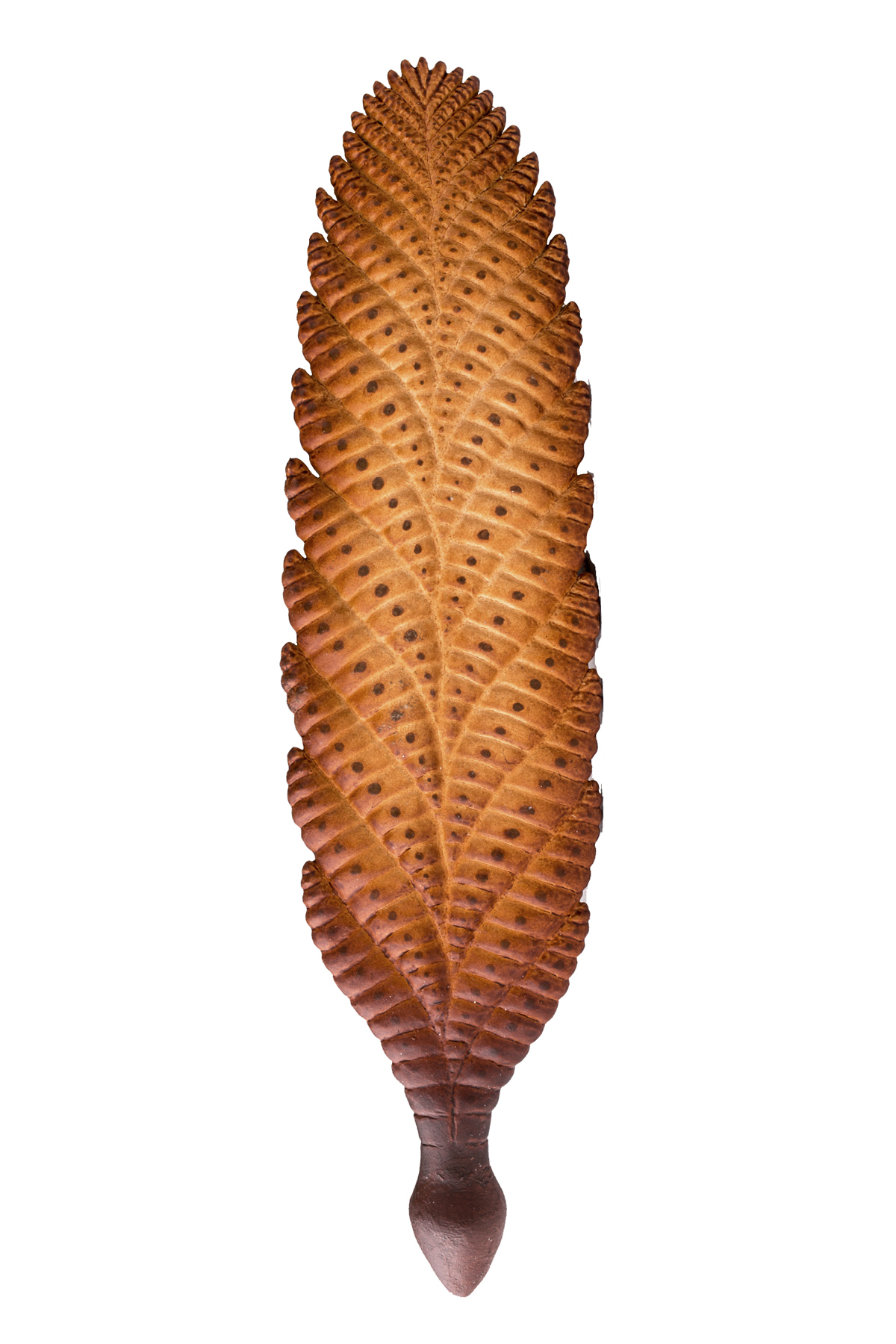 The upshot: We have something that is close to the ancestor of all modern Cnidarians (it could be the common ancestor, but we’ll never know). It is the oldest known predator, though it’s possible that ctenophores (comb jellies) which lived back then and some of which are semi-predatory now, could have been predacious about the same time—or earlier.  What we do know is that ancestors of modern cnidarians lived before the Cambrian explosion, which occurred roughly 540 million years ago and produced a radiation of many groups of multicellular organisms.

The BBC article quotes a scientist on the significance of the fossil:

“This is the cast-iron evidence of modern-looking organisms in the Pre-Cambrian. That means the fuse for the Cambrian explosion was probably quite long,” said Dr Phil Wilby, palaeontology leader at the British Geological Survey.

Well, I’m not sure what he means by “fuse,” or whether 20 million years is a long fuse, but surely the fuse—the ancestor whose descendants were part of the Cambrian explosion—was a lot longer than that. After all, the ancestor of all living species lived over 3.5 billion years ago, and so “fuse” was very, very long!

10 thoughts on “The first known predator: a newly-described fossil”