I may have mentioned Jason Rosenhouse‘s new book before, but I just finished it and wanted to give it two thumbs up. The image below links to the Amazon site: 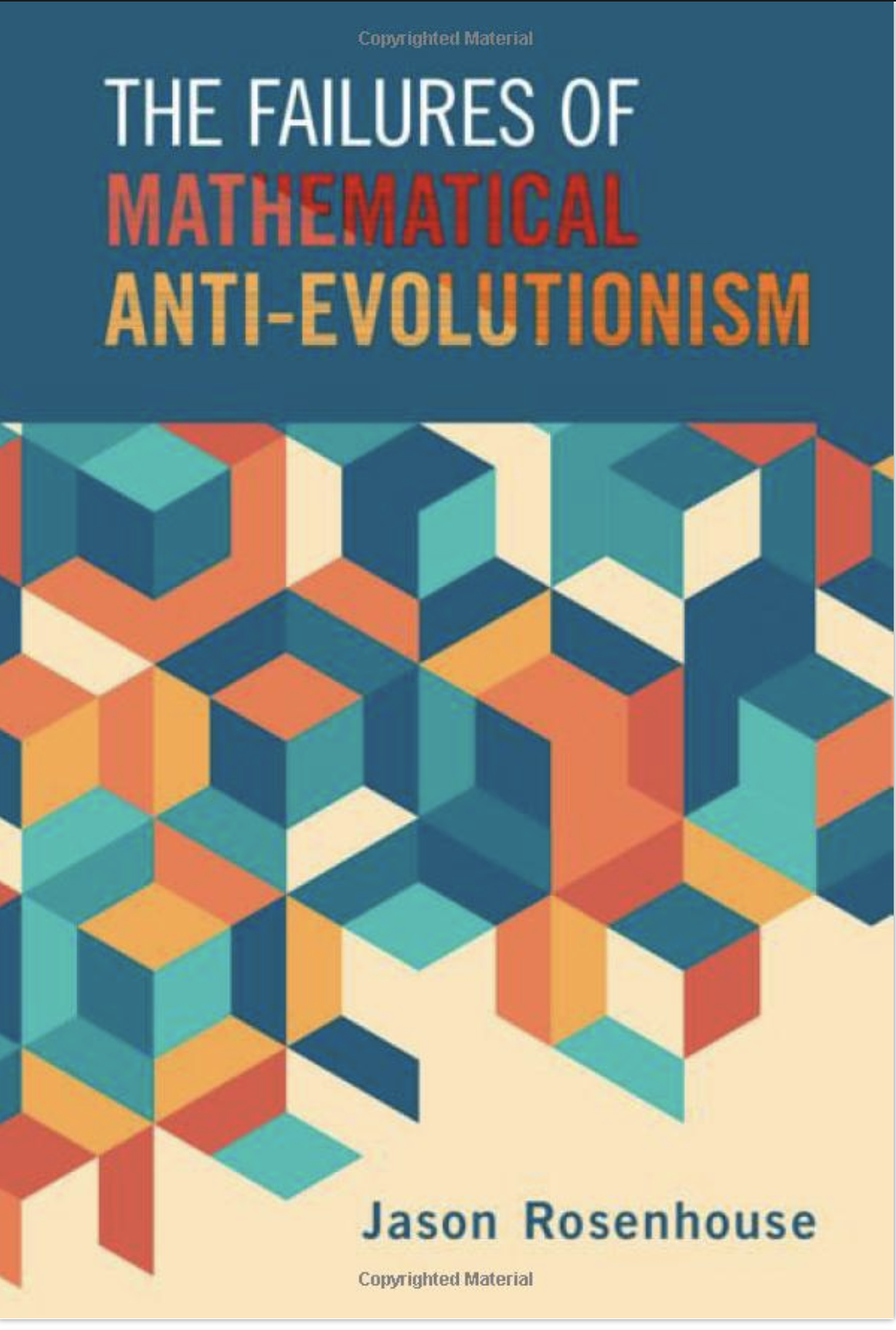 This book is a withering critique of the so-called “probabilistic” arguments against evolution promoted by Intelligent Design advocates like Michael Behe and William Dembski. Jason is ideally equipped to write about them as he’s both a professor of mathematics at James Madison University and a diligent reader of creationist and ID literature. An earlier book of his, Among the Creationists: Dispatches from the Anti-Evolutionist Front Line, describes his many visits to creationist meetings and gatherings and his attempt to suss out the psychology of anti-evolutionists without being judgmental.

In this book, though, Jason pulls no punches, analyzing and destroying the arguments the evolution simply could not have occurred because the probability of getting organisms, proteins, or “complex specified information” is too low to be explained by materialistic processes. Ergo, the ID arguments supposedly point to the existence of the Intelligent Designer, who we all know is God. (IDers like to pretend that it could be a space alien or the like, but it doesn’t take much digging to descry the religious roots of ID, sometimes described as “creationism in a cheap tuxedo”.) The real target of ID is not just evolution, but naturalism or “materialism”, as they sometimes call it. Their ultimate goal is to sneak religion into public schools and into mainstream science. But they’ve already lost.

Still, the religious motivations aren’t important when the calculations are wrong—or rather, can’t be made. Jason’s main point in this book is that although complex-looking mathematics is often invoked to show the improbability of naturalistic evolution, IDers lack information about probability space to plug into their equations, so they can’t come to any mathematically-based conclusions. (And when we do have information, like that bearing on the claim that evolution violates The Second Law of Thermodynamics, or that the evolution of chloroquine resistance to malaria is impossible, that evidence doesn’t support the IDers’ and creationists’ claims.)

In the end, all IDers do, argues Jason, is throw sand in the layperson’s eyes with fancy equations, and then simply assert, without actually making valid calculations, that evolution by natural selection is too improbable to have occurred.

Other arguments that are less mathematical, for example that bacterial flagella could not have evolved in an adaptive, step-by-step process, are also discussed, and Jason shows how they’ve been refuted.

Another admirable aspect of the book is that Jason writes very clearly and elegantly, so it’s easy to read. Here are two specimens of his prose that also make his main point:

What about specificity? Dembski’s theoretical development of this concept essentially required graduate-level training in mathematics. He helped himself to copious amounts of notation, jargon, Greek letters, and equations. Anyone unaccustomed to wading through prose of this sort could easily come away thinking it represented work of depth and profundity just from the level of technical detail in its presentation.

However, when it came time to discuss the specificity of an actual biological system, the flagellum in this case, all of the technical minutiae went clean out the window. For all the use Dembski made of his elaborate theoretical musings, they might as well never have existed at all. He just declared it obvious that the flagellum was specified and quickly moved on to other dubious claims. At no point did he attempt to relate anything in reality to the numerous variables and parameters he included in his mathematical modeling.

As Jason shows, the lack of parameters needed to show that evolution is too improbable to have happened in a Darwinian way is a ubiquitous problem for iD. One more quote:

This pattern, of introducing difficult mathematical concepts without ever really using them for any serious purpose, is ubiquitous in anti-evolution discourse, and this fact goes a long way to explaining why mathematicians an scientists are so disdainful of it. Professionals in these areas strive for the utmost clarity when presenting their work. Used properly, the jargon and notation permit a level of precision that simply cannot be achieved with more natural language. This might seem hard to believe, since a modern scientific research paper will be unreadable for anyone without significant training in the relevant discipline. But the problem is not a lack of clarity in the writing. Rather, it is just that the concepts involved are difficult, and experience is needed to become comfortable with them.

. . . In section 2.6, I remarked that anti-evolutionist arguments play well in front of friendly audiences because in that environment the speakers never pay a price for being wrong. The response would be a lot chillier if they tried the same arguments in front of audiences with the relevant expertise. Try telling a roomful of mathematicians that you can refute evolutionary theory with a few back-of-the-envelope probability calculations, and see how far you get. Tell a roomful of physicists that the second law of thermodynamics conflicts with evolutionary theory, or a roomful of computer scientists that obscure theorems from combinatorial search have profound relevance to biology.

You will be lucky to make it ten minutes before the audience stops being polite.

If you want a clear and convincing response to IDers’ (and earlier creationists’) claims that evolution could not have happened without God or a Designer because it’s simply improbable via naturalism, read this book.

It will convince you, as Laplace supposedly tried to convince Napoleon about astronomy, that science—in this case, evolution—has no need of the God hypothesis.