I was going to write in more detail about this new Quillette piece, but the duck rescue has derailed me for a bit, and this post is already long. Here’s the piece, which shows that what happened in New Zealand—the impending infusion of of academics and science by indigenous myth—seems about to happen in Australia as well. Click to read: 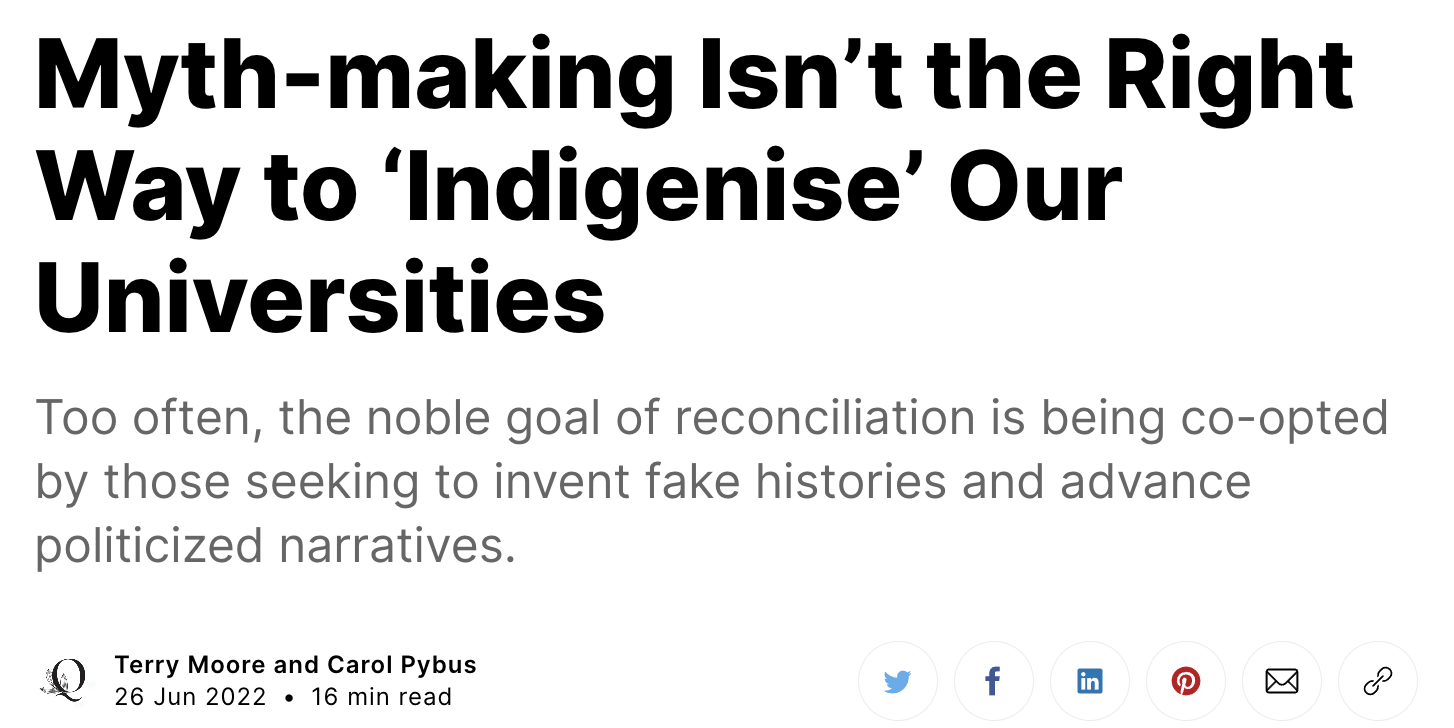 Both authors have extensive experience in teaching indigenous studies; as the article notes, so they don’t seem tendentious:

And both are in favor of “indigenising” Australian universities in the sense of imbuing them with a sense of aboriginal culture and a recounting the horrid history  the treatment of indigenous people by “settlers”—a treatment worse, I think, than the way Europeans treated the Māori in New Zealand. In fact, Moore and Pybus bend over backwards to favor such inclusion, and I’m not one to question them.

The problem, they note, is not the infusion of local history and culture (taught honestly) into universities. As in New Zealand, the problem is turning universities into propaganda mills that valorize indigenous people, including buying their mythology as truth and, using a Manichean approach of demonizing “whiteness”, making things more divisive. The authors favor what they call a “liberal” approach:

A liberal approach to Indigenisation recognises the injustice and violence of colonisation, and the on-going structural determination of unequal life opportunities that has resulted. It acknowledges that “whiteness” (to such extent that term is useful) and its associated values are not universal, that they can affect individuals’ capacity to negotiate the world, and that an unbridled individualist ethos can serve to marginalise collective cultural identities. The approach also confronts the fact that earlier research often ignored Indigenous experiences and considered the research subjects as secondary to the development of (white) science and researcher careers. It also accepts that a rebalancing of power in the research relationship (as embedded in the Whole of Community Engagement initiative, led by Charles Darwin University) can help Indigenous people build a healthy sense of identity, and that the judicious embedding of Indigenous perspectives in the curriculum can be genuinely helpful toward advancing reconciliation.

Given the history of Australia, this sounds absolutely reasonable. But, as in the U.S. and New Zealand, this process seems to be going too far—to the point of telling untruths that comport with indigenous mythology or “remembered” history, as well as denigrating whiteness and judging people on their ancestry. And the proponents of the divisive approach are the same class of people who do this in the U.S. and New Zealand: the elites

Unfortunately, this critical liberal approach to Indigenisation is being overtaken by an identity-based form that stigmatizes normal academic debate and critique as a form of harm visited upon Aboriginal minds. Activists who hew to the American-influenced social justice movement routinely emphasize postmodern doctrines that cast knowledge as entirely subjective in nature, and science as inherently racist and exploitative. They have translated these understandings into a totalising focus on the injustices done by the dominant capitalist structures of Australian society to working class, female, gay, non-white, disabled, and transgendered individuals. The university is presented as an inherently colonial and oppressive institution that must be overhauled to prioritise belief, feelings and subjectivity over evidence.

In our experience, this identity-based and illiberal approach to Indigenisation is primarily championed by an academic elite whose members are predominantly drawn from regional and urban backgrounds in Australia’s south and on its east coast. It’s a professional clique whose members often have little authentic connection to heritage culture—so much so that several have been accused of having no Aboriginal ancestry whatsoever.

Within this academic/activist subculture, there is an oversized level of attention paid to public symbols and details of language—especially those that are deemed microaggressions. In keeping with their counterparts in other parts of the English-speaking world, they co-opt American social-justice parlance by agitating for “safe spaces” and “trigger warnings,” denigrate whiteness, and promote a mythologized version of Indigenous culture and beliefs that casts Aboriginal people as perpetual victims and strips them of agency. At UTAS, Indigenisation has led to the denigration and replacement of an entire discipline-based critical Aboriginal Studies program with a single first-year unit that consists of a “country tour guided by Palawa Elders and Knowledge Holders,” whose content predictably blurs the line between academic instruction and political sloganeering.

Science will be affected, of course:

(From above): Activists who hew to the American-influenced social justice movement routinely emphasize postmodern doctrines that cast knowledge as entirely subjective in nature, and science as inherently racist and exploitative.

. . . Many units also integrate far more dubious (and faddish) studies of “whiteness,” so as to denaturalise the purportedly false universalism of scientific knowledge—even if this kind of effort often is couched in deliberately hazy language that obscures the obvious tension between science and spiritualism.

. . . The dynamic [of divisive indigenisation] is reflected too, in the story of Bruce Pascoe’s 2014 non-fiction book Dark Emu: Black Seeds: Agriculture or Accident?, in which the well-known Australian writer makes a number of claims about Aboriginal people and society that are refuted by history and science, but which are now popularly accepted (such as the claim that Aboriginals have lived in Australia for 120,000 years, roughly double the actual figure).

That reminds me of the claim by some in New Zealand that it is absolutely true that the Polynesians (ancestors of the Māori) discovered Antarctica in the seventh century. Not so: Antarctica was discovered in 1820 by the Russians.

. . . One reason these ahistorical and reductionist stereotypes of early Aboriginal societies are accepted by so many academics is that they read back to us our own mythologized visions of communal, pre-industrial life. In this imagined world of peace and harmony, the elders are universally respected repositories of timeless, spiritually understood truths that exist beyond the scrutiny of science (or even the comprehension of outsiders). This is the kind of “pseudo-profound bullshit” (as one academic paper has described it) that was evident in a recent ABC Science dispatch produced by the Australian Broadcasting Corporation, in which an Indigenous academic explained Indigenous spirituality as a sort of proto-environmentalism in which “everything is connected and needs respect—not just humans, animals, trees and rocks—but land and sky, and past and present.”

The view that “everything is connected” in a spiritual sense is also part of the “ways of knowing” Mātauranga Māori from New Zealand. It sounds good and spiritual-ish, but doesn’t mean much. As my advisor Dick Lewontin once said, the fact that the laws of physics apply throughout the universe doesn’t mean that the motions of Saturn have any effect on my gardening.”

The whole “divisive” indigenising movement sounds too close to the New Zealand situation for comfort. Aussie scientists and academics should ensure that myths are not treated as truths, or that indigenous “ways of knowing” are equated to modern science. In the end, the authors make a reasonable call to infuse local culture and history into academics—but not at the expense of objective truth:

Our goal should be to bring the same thoughtful, critical perspective to bear on Indigenous issues that we bring to every other subject. We are in complete agreement with those who say that issues pertaining to Aboriginal peoples once were either ignored, or taught in a racist way. But thankfully, those days are long past. And it won’t do anyone any good—especially Aboriginal people themselves—if we insist that making amends for past wrongs requires us to renounce considered debate and the disinterested search for truth.

17 thoughts on “Quillette: Indigenous “ways of knowing” in Australia”