As I said, we managed to rescue six of the seven newborn ducklings that invaded Botany Pond this morning. We had no choice: the resident adults were already attacking the babies, and without rescue they would all have been killed within a few hours. (This isn’t normal; most hens are not killers, and we’ve had several broods coexist at Botany Pond in the past.)

We know now that the invaders were from a nest on Ryerson Hall (where Computer Sciences lives)—a very short distance from Botany Pond. We’ve been monitoring a nest on a first-floor ledge there, and hoping against hope that the brood wouldn’t hatch. But they did, for when we went back to the nest after the rescue, it was empty, the eggs were gone, and there were pieces of eggshell on the ground: a sure sign of a hatching.

Here’s the empty nest. Note the way that the mothers line it with breast feathers that they pluck from themselves: a behavior that really is touching: 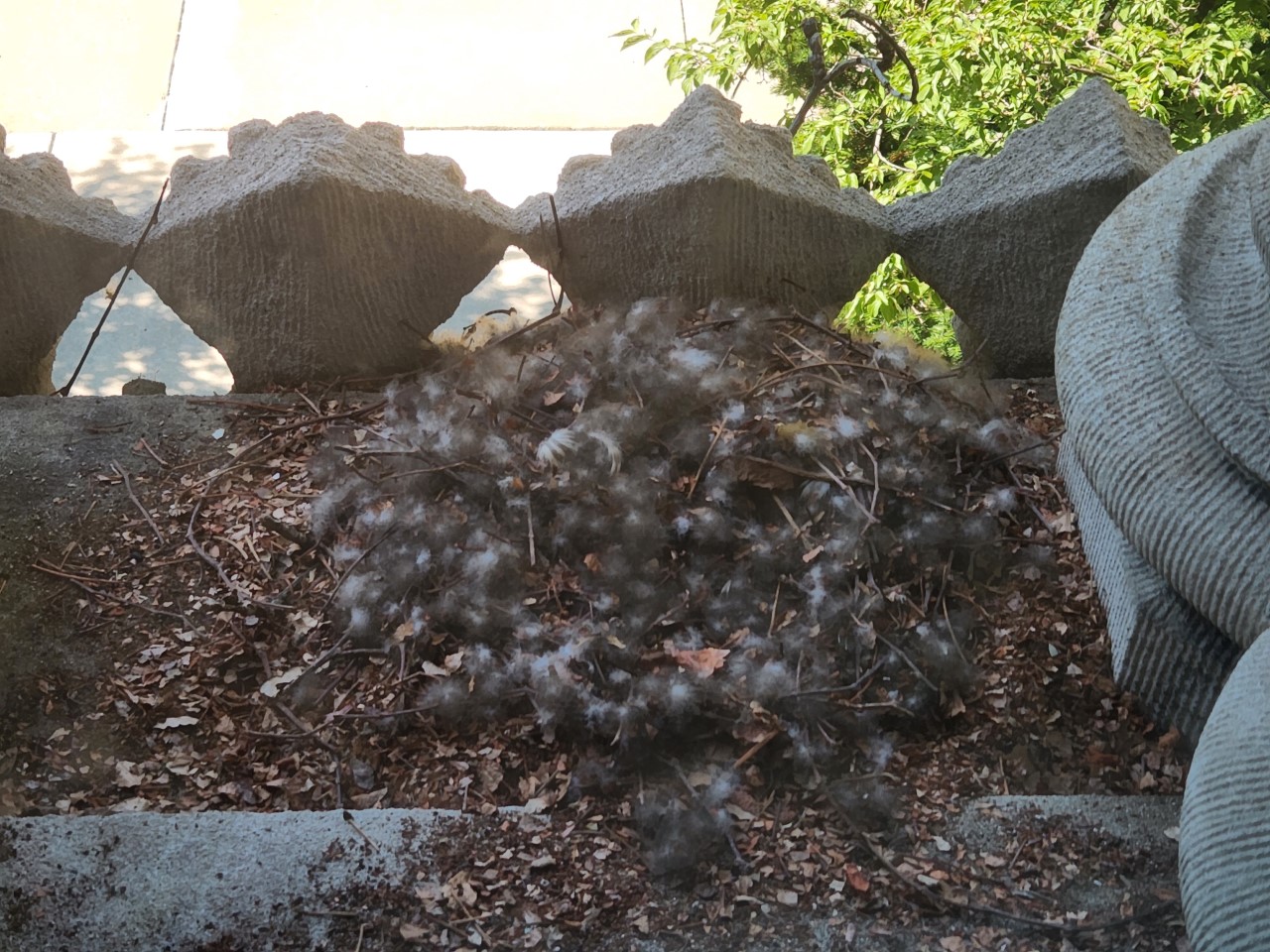 And here is the box of six we rescued (both photos by Jean Greenberg). These little peepsters are already on their way to rehab at Willowbrook Wildlife Sanctuary. 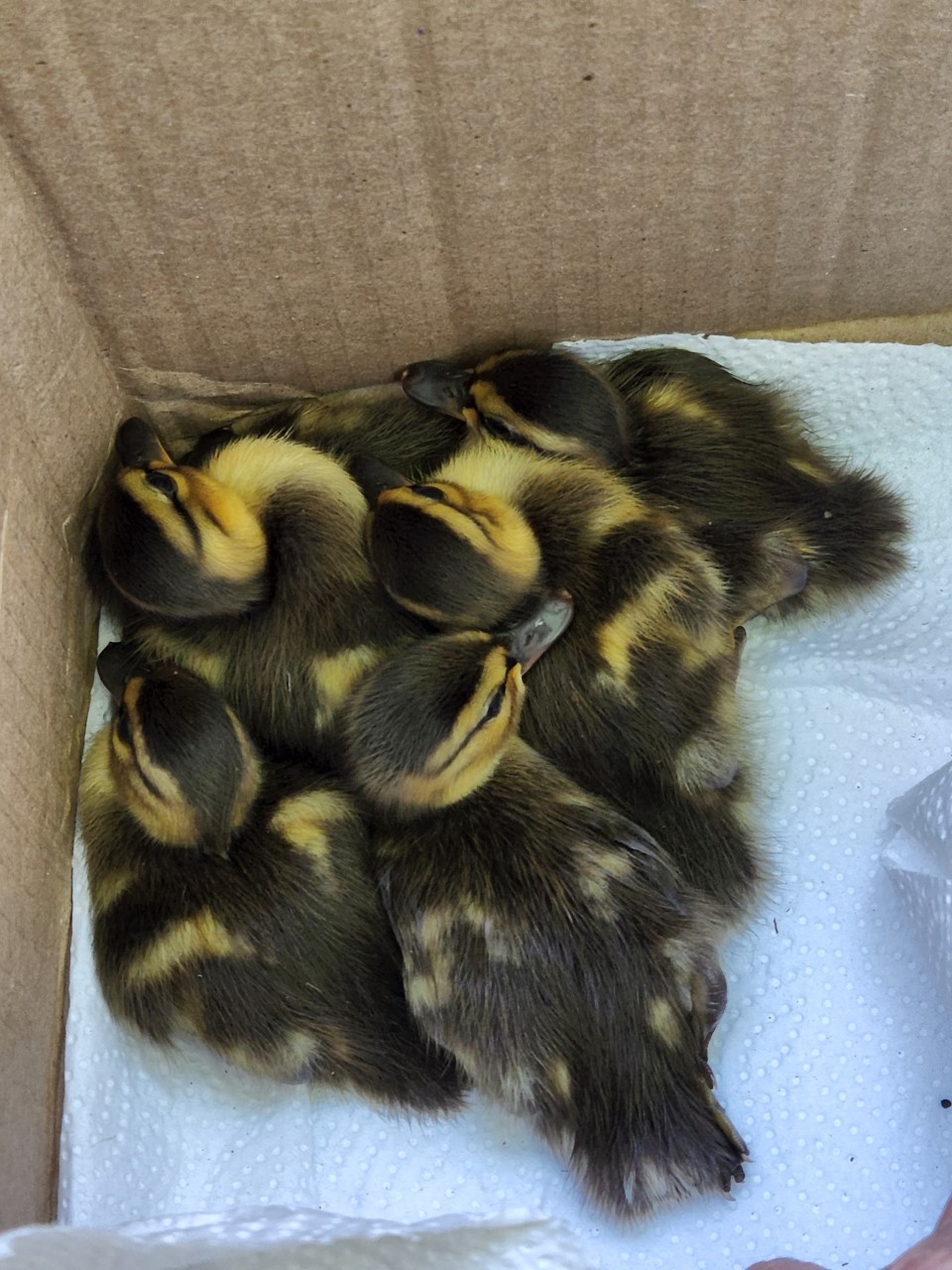 I have to say a few words about my state of mind, just to get it off my chest.  These experiences are deeply upsetting for me, and it takes me days to get over them. First of all, I have to convince myself that separating the mother from the babies this way is the right thing to do. That’s because it really traumatizes the babies, who peep like crazy and want to be with their mother. The mother, too, is deeply upset; after we took her brood, she flew around the pond quacking forlornly, looking for the ducklings.

On an intellectual level I know that if the goal is to save lives, I’ve done the right thing. But you have to live through such a rescue to see the strange combination of elation and depression it induces. Everyone’s delighted when the last stray duckling is captured. The down feelings come later, when you think about  how the mom feels and how the babies miss a proper mother and normal upbringing. (Be assured, though, that Willowbrook and its net of rehabbers do a first-class job.)

No matter how hard I try, I can’t dismiss the fate of the one who died as “just something that happens in these situations.” Yes, I know that mortality among wild mallard babies has to be something above 95% (after all, in a stable population, each hen leaves just two offspring over her whole life), but my motto is “no duckling left behind.” We left one behind today—the one who was pecked to death.

I have no children, and one can psychologize and say that these ducks are my children. Perhaps in a sense they are, because I’m deeply committed to bringing them up healthy, and when they leave at the end of the summer I’m sad, but also satisfied that I did a good job. That maternal/paternal feeling is what all of us share on Team Duck, but perhaps I’m more emotionally invested than I should be.

I fear I’m writing nonsense, but want to let you know that I’m not writing this for assurance that I did the right thing. I am satisfied with what I did, though one duckling died. I’m writing this because there’s a weird mixture of happiness and deep sadness roiling inside me and I needed to get it out by writing.

When I was walking back to work after I went home to shower, I thought that this should be on my tombstone: “He saved a lot of ducks.”

But now I have to go give the Killer Ducks their afternoon feeding, and then go home to rest. The morning’s sloshing around in mud and water was exhausting.