Conor Friedersdorf has a new piece in The Atlantic that tackles a question that vexes many:  what happens if a university or institution has a free-speech policy but at the same time guarantees an “inclusive and welcoming environment” for everyone?  Now we already know that these two policies will be incompatible in some cases, for some critical speech, say criticizing the tenets of Islam, the “colonialist” policies of Israel, or the principles of Black Lives Matter, will inevitably be perceived as “unwelcoming”—indeed, as “hate speech.” What happens then?

Such a policy used to be in effect at Georgetown University, and resulted in the resignation of legal scholar Ilya Shapiro, who made some hamhanded tweets about Biden’s new pick for Supreme Court justice Ketanji Brown Jackson, a black woman. These tweets were issued before Shapiro was appointed at Georgetown (which does profess a free-speech policy), so shouldn’t have caused him trouble, but I have to say that they were pretty dire. And yes, offensive.

This is the one that caused all the trouble (he’s since taken it down): 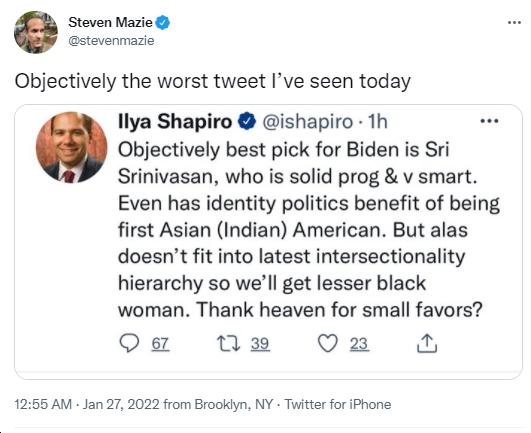 It’s not clear whether Shapiro meant by “lesser” whether black women are inherently poor choices, or that Srinivasan was simply a “greater” choice. Anyway, Shapiro rightfully was called out for it, and apologized:

This is free speech, particularly because the tweets preceded Shapiro’s demonization by Georgetown, which nevertheless launched an investigation of his conduct after he was hired. He was ultimately exculpated, but only on the grounds that he wasn’t a professor when he made the tweets. Still, the university made dark threats that things might be different if Shapiro tweeted like that again.  So he quit, announcing in The Wall Street Journal that he didn’t want to work in a hostile atmosphere. So that was the end of that; he now has a job at the Manhattan Institute, a right-wing think tank.

Well, it’s not quite the end, because in the a new piece in The Atlantic (click to read), Conors Friedersdorf analyzes two aspects of the case that remain.

A. What happens when free speech conflicts with “inclusivity”?  To me the answer is obvious, especially at a school like Georgetown that professes to adhere to free speech principles. Unless the speech is not protected by the First Amendment because of the exceptions carved out by the courts (harassment, production of imminent, predictable violence, defamation, etc.), speech takes priority over people’s offense. (This doesn’t necessarily hold in private universities or corporations, but in most cases it should.)

Further, such discipline isn’t really known to further inclusivity; that’s just an assumption. Any punishment then would be either a deterrent or a form of retribution, neither of which is justifiable. Friedersdorf says:

In recent years, diversity, equity, and inclusion administrators have proliferated across colleges as the “kindly inquisitors” of the “Great Awokening.” These officials are supposed to make sure that people from underrepresented groups feel included on campus. Yet in practice, DEI offices and the deans who supervise them have taken on a dubious enterprise: enforcing leftist speech norms most familiar to highly educated cultural elites. The unspoken assumption is that disciplining a scholar for, say, an offensive tweet will help young people from marginalized backgrounds. It’s an assumption that too many universities simply accept and too few feel any need to study or measure, let alone prove.

The conflict was addressed by Georgetown, but the resolution was ambiguous:

Georgetown Law Dean William M. Treanor declared in a statement that he was guided in the Shapiro matter “by two overarching principles.” The first was the law school’s “dedication to speech and expression,” while “the second and equally important principle was our dedication to building a culture of equity and inclusion.” When free speech and “building a culture of equity and inclusion” are on equal footing, the implication is that, when they conflict, free speech can sometimes lose. Treanor’s formulation leaves employees without any way of knowing exactly where the lines are. If even one ambiguously worded tweet can ostensibly surpass Georgetown’s threshold for harassment—or is deemed to violate professional-conduct policies against offensive or inclusionary speech—an employee risks being disciplined or fired over almost any statement that might offend others.

The ambiguity is deliberate, for it allows the University to do what it wants.

Fortunately, the Foundation for Individual Right and Expression (FIRE) have just announced that Georgetown has resolved the conflict, and—hallelujah!—has given precedence to speech over feelings. It’s done so by adopting a version of the University of Chicago’s Principles of Free Expression—making it the 87th college to do so. From FIRE:

The ideas of different members of the University community will often and naturally conflict. It is not the proper role of a University to insulate individuals from ideas and opinions they find unwelcome, disagreeable, or even deeply offensive. Deliberation or debate may not be suppressed because the ideas put forth are thought by some or even by most members of the University community to be offensive, unwise, immoral, or ill conceived.

It is for the individual members of the University community, not for the University as an institution, to judge the value of ideas, and to act on those judgments not by seeking to suppress speech, but by openly and vigorously contesting those arguments and ideas that they oppose.

If this language sounds familiar, it should. Georgetown is just the latest institution to adopt a policy that closely mirrors the Chicago Statement. Since its introduction in 2015, FIRE has touted the Chicago Statement as a model free speech policy for universities and colleges across the country.

Taking cues from the Chicago Statement, Georgetown’s new policy goes on to say:

Although members of the University community are free to criticize and contest the views expressed by other members of the community, or by individuals who are invited to campus, they may not obstruct or otherwise interfere with the freedom of others to express views they reject or even loathe. To this end, the University has a solemn responsibility not only to promote a lively and fearless freedom of deliberation and debate, but also to protect that freedom when others attempt to restrict it.

So good for Georgetown, even though FIRE has still given it a “red light” for its speech-code policies since it still has rules in place that inhibit free expression.

Finally, and to Friedersdorf’s main point:

B. Who should formulate the rules for speech and behavior? As the subtitle says above, “overzealous administrators” often make the rules and punish faculty and students, while Friedersdorf says that the faculty should drive out the “overzealous administrators,” which include the DEI bureaucracy and all the other administrators involved in making arcane rules designed to create an atmosphere of in loco parentis. As we know, this group is growing far faster than the number of faculty or students. Friedersdorf’s recommendation, which is really only a small part of his story, is this:

Universities should operate according to scholars’ values, not bureaucrats’ subjective judgments. And my correspondence with Georgetown professors indicates both significant disagreement with administrators and a dearth of clarity about what speech—in practice—might get them investigated or punished.

To fix this problem at Georgetown and elsewhere, faculty need power to protect free speech. At present, sanctions in higher education flow in one direction: Diversity bureaucrats exert control over faculty members whose speech allegedly undermines inclusion. I propose giving faculty the power to investigate, sanction, and fire diversity officials if they undermine free speech. Administrative abuses will continue as long as bureaucrats can punish speech, even in flagrant violation of university policy, without any consequences.

This is pretty much the situation at the University of Chicago, but we still suffer from administrative bloat.  Now I don’t think we should do away with DEI administrators completely, for, after all, they have a job that’s vital for the university, and one that no professor would want to do. Diversity needs to be both promoted and protected. That said, I agree with Friedersdorf that the faculty and not the administration should make the rules relevant to education, which includes speech and diversity issues. The rest of the administration should be running the institution, making sure it functions physically and financially. While DEI can investigate cases, the rules by which they do this, or regulate speech, must be made by the faculty itself. After all, the purpose of the university is teaching and learning, a purpose summed up by the University of Chicago’s famously young President:

The object of the educational system, taken as a whole, is not to produce hands for industry or to teach the young how to make a living. It is to produce responsible citizens. — Robert Hutchins

These aims are best achieved by having the academic, speech, and behavior rules made by faculty, not administrators.  Why? Because, I think, the faculty ponders these issues more deeply than the administration, and have been trained in law, philosophy, and ethics, not “critical studies”. After all, Chicago’s foundational principles of the Kalven Report and the Chicago Principles of Free Expression, regarded as the gold standards for college speech regulation, were both concocted by faculty committees, not administrators.