What would you do if you were editor of the Washington Post and one of your reporters, David Weigel, retweeted this tweet. 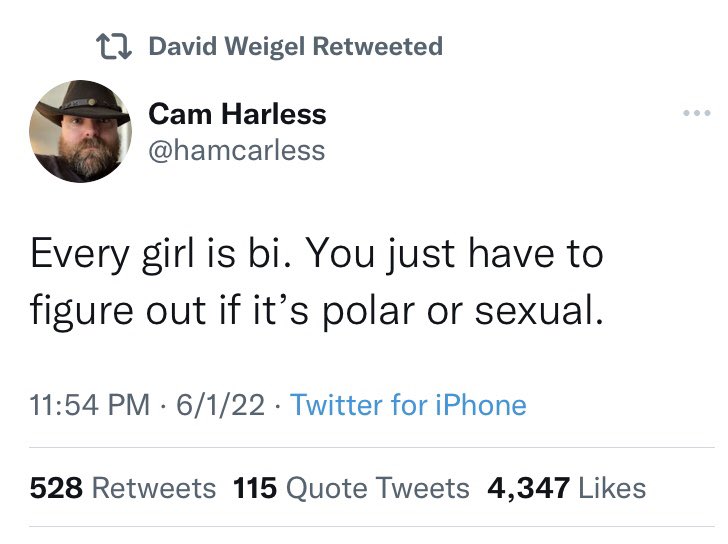 This, along with another WaPo story, is the subject of Bari Weiss’s latest column in the WaPo. It involves the hypocrisy of a paper that would severely punish a journalist for the retweet above but do nothing about another one who lied. Click to read, but if you read Weis often, you should subscribe (I do):

Now I admit the retweet above, while a bit humorous, is also in terrible taste, and were I editor I would have called in Weigel, told him that he has a public presence on Twitter, asked him to apologize, and tell him never to do that again.  But of course after the predictable social-media reaction, they did more than that.

It began with a joke. Actually, it was a retweet of a joke. The Washington Post’s politics reporter David Weigel retweeted the following joke this past Friday: “Every girl is bi. You just have to figure out if it’s polar or sexual.” I know what you’re thinking: Call the police on this man immediately.

I smirked when I read it. Not a full laugh, but a chuckle. Weigel apologized for the “offensive joke” later the same day: “I apologize and did not mean to cause any harm,” he said.

But it was already too late.

His colleague, Felicia Sonmez, had seized on the tweet, starting a public shaming of Weigel as a sexist. She’s spent the past few days reposting others calling her a hero; slamming one colleague who was silly enough to defend Weigel; posting about that colleague and tagging the bosses. Oh, and throwing editors under the bus (repeatedly).

Never mind collegiality or handling minor disputes privately. Never mind that Weigel quickly took down the post and apologized for the poor taste. Never mind that they were friends and he had signed onto a petition in support of her as she geared up to sue the paper for discrimination (that suit was dismissed with prejudice by a D.C. judge in March). It was David Weigel’s time to be punished.

“I have long considered Dave a good friend,” Sonmez wrote. “It’s painful and confusing when friends say and do things that are wrong, and makes it all the more uncomfortable to call them out—even though it’s necessary to do so.”

The Post’s response on Monday was not to chide Sonmez for indiscretion, or to suggest a Twitter time-out, but to suspend David Weigel for a month without pay.

This, as Weiss suspects, may be the beginning of a permanent separation between Weigel and the Post.  Even if the punishment is temporary, what happened to Weiss may happen to Weigel: he won’t be formally fired, but his colleagues will create such a toxic atmosphere for him that he’ll leave.  To my mind, suspension without pay is far too severe an offense for this retweet.

But wait—there’s more! Another Post reporter committed what I think is a worse offense: probable lying and lazy reporting.

Amazingly, this story competed with another Post drama from the weekend: The paper issued three corrections to a story by the technology columnist Taylor Lorenz, which still contains at least one obvious falsehood. The paper claims that Lorenz reached out to a source for comment, which the source says she didn’t do, and Lorenz later admitted she didn’t do (but the story still contains the lie). Even a CNN media reporter said it was “weird WaPo can’t get this basic detail straight.” Lorenz freaked out about CNN noting the correction debacle and said that doing so was “irresponsible & dangerous.” Yes: Dangerous!

So let’s get this straight: at the paper that cracked wide open the biggest presidential scandal in history, the paper that has long defined great political reporting, the paper of Katherine Graham and Ben Bradlee and David Broder, journalists lie and publicly attack their colleagues and remain comfortably in their positions. And a reporter is suspended without pay for a retweet.

Lorenz’s story is here and just below is the Post’s correction:

Below is the tweet from CNN reporter Oliver Darcy with part of the correction. Note that Lorenz blames the error on an editor, but the Post denies that.  What the Post did do was remove the false statement without acknowledging it: a journalist no-no.

The paper was supposed to improve under the new editor, but there’s not much sign of that to date.

WaPo's 2nd correction indicated one influencer was asked for comment "via Instagram" before publication. The influencer is saying that isn't true and Lorenz is now saying she reached out after. Small detail in grand scheme but weird WaPo can't get this basic detail straight. https://t.co/kBFX0HSOn6

It sure looks as if Lorenz had a part in this issue; after all, she could have told the Post to issue a correction, and I don’t believe her when she blames the errors on the editors. But she’s suffered no opprobrium from the Internet, and hasn’t yet incurred a suspension.  The criticism of Lorenz comes from other journalistic outlets.

If Lorenz did this, she deserves a talking-to and then a requirement to issue an apology. I doubt this will happen.

The rest of Weiss’s piece is largely about how liberating she’s found publishing on Substack to be, and why. But she also hurls a few zingers at the “mainstream media”:

It’s not that the excellent, old-school reporters aren’t there. They are. They just don’t—or can’t—control the culture.

Partly that’s because of weakness and cowardice at the top of the masthead. Partly it’s because you can pretty much guarantee the kind of worldview you’re going to get when you hire journalists pedigreed by Harvard and Brown and Yale. They tend to think almost exactly the same way about almost every situation—and Twitter only reinforces the groupthink.

As Andrew Sullivan said, “We’re all on campus now.”  But re Weigel: a retweet is not a violation of journalistic ethics, it’s in bad taste. But it’s also not a suspending offense. That it proved to be is explained by Weiss above: the nastiness of social media and the groupthink of liberal newspaper reporters. What is again missing is a bit of empathy.

81 thoughts on “WaPo journalist suspended for retweeting a joke, even after an apology”