Welcome to the Cat Sabbath, Saturday, June 4, 2022, when all cats are expected to avoid work and study the Talmud. (Every day is Cat Shabbos.)  It’s graduation day at the University of Chicago, when the class of 2023 moves up to become four-year students. As always, we award honorary degrees only to scholars and do not solicit the likes of Taylor Swift to give commencement advice to our students. Foodwise, it’s National Cheese Day, a food that is kosher so long as it’s not mixed with meat. It’s also a favorite of many cats.

The Google Doodle today (click on screenshot below; there’s an animation at the click) celebrates the life of Kiyoshi Kuromiya, described as a “Japanese American author and civil rights, anti-war, gay liberation, and HIV/AIDS activist.”

A photo of Kuromiya from the Philadelphia Gay News: 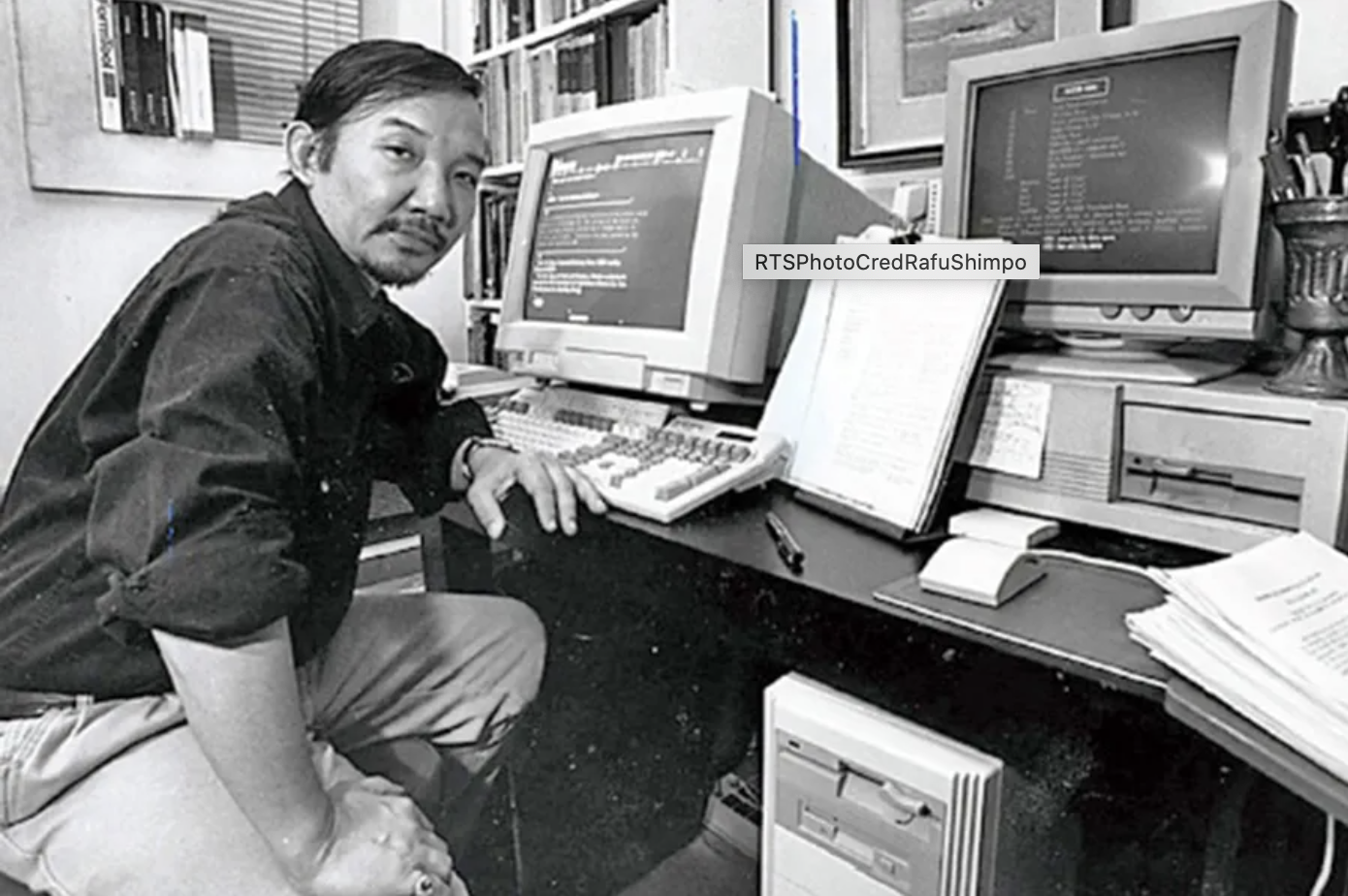 Stuff that happened on June 4 include:

A poster announcing the opening of the Transcontinental Railroad 7 years before the record run:

Here’s Ford in his Quadricycle that same year. These were custom-built cars with 4 horsepower and a top speed of 20 mph, and they were very expensive. The average Joe wasn’t able to afford a car until Ford produced the Model T (and Ford got very rich). 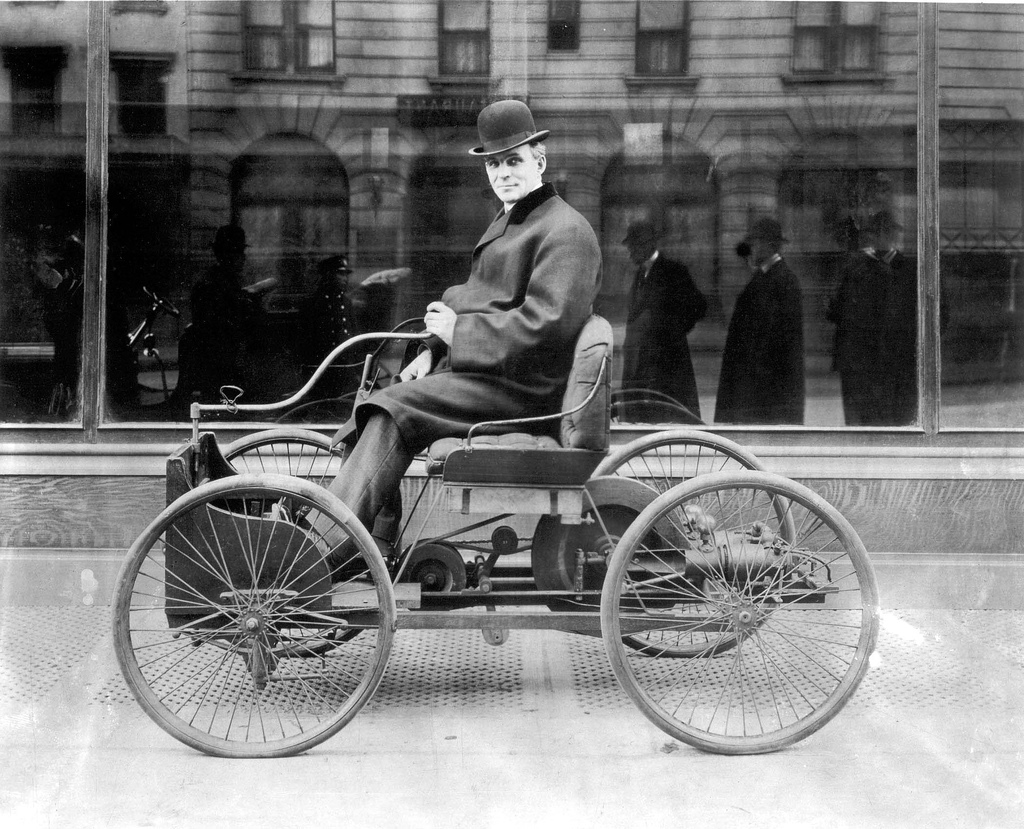 Here are the current hourly minimum wages in the U.S. (from Wikipedia; click to enlarge).  California and Washington D.C. lead the nation, with hourly minimums of $15.00 or more: 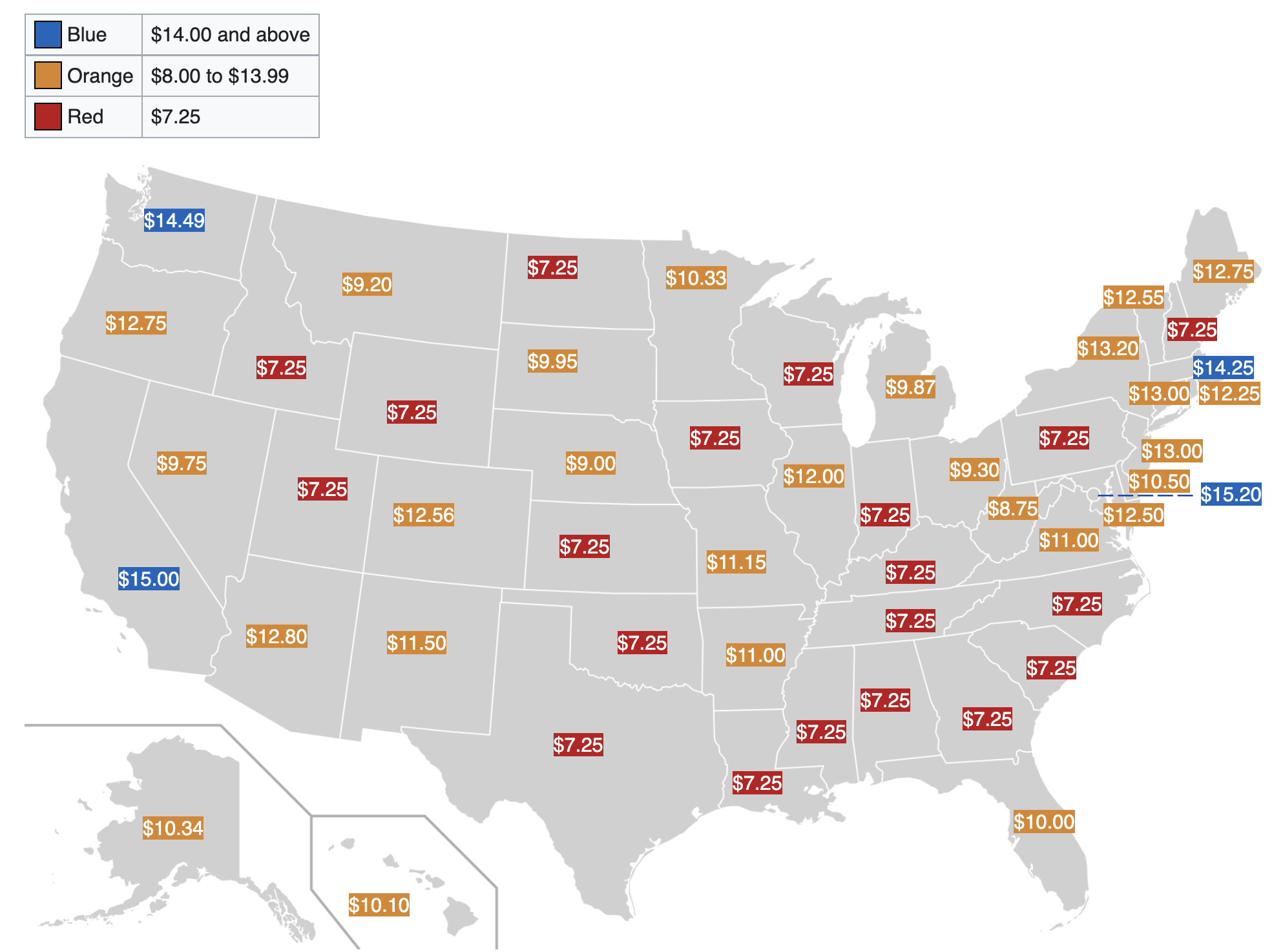 Here’s the famous video of Davison, who didn’t intend to commit suicide, running in front of the King’s horse. It occurs at 2:11.

The right of citizens of the United States to vote shall not be denied or abridged by the United States or by any State on account of sex.
Congress shall have power to enforce this article by appropriate legislation. 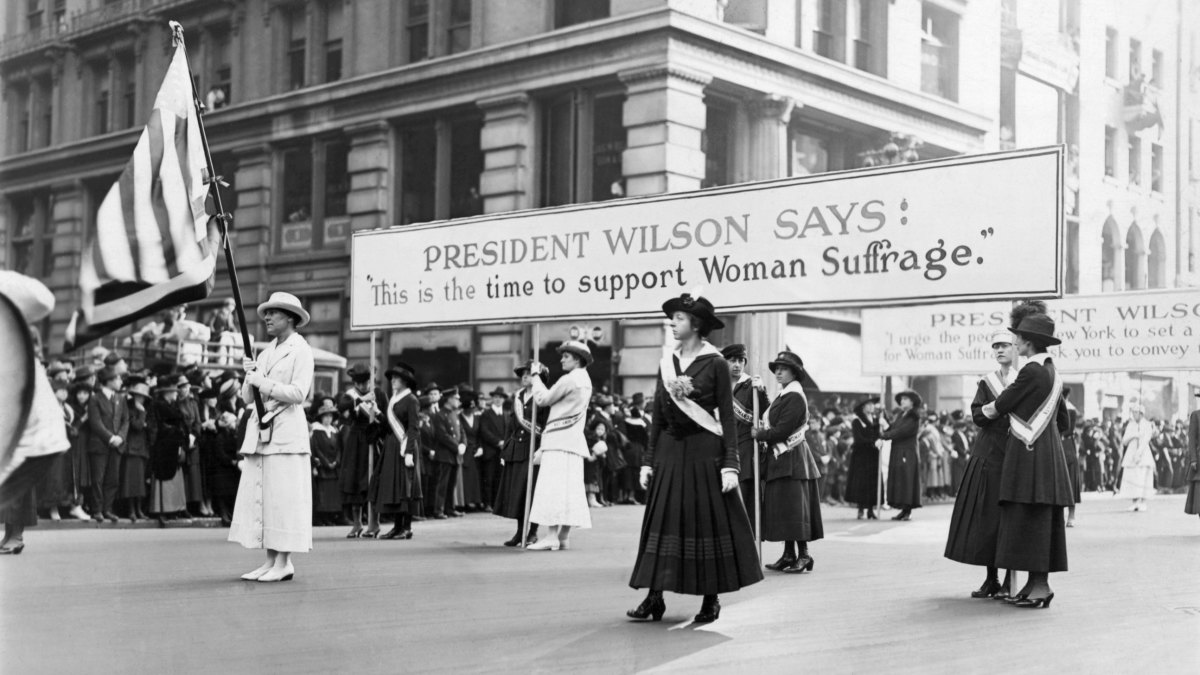 This is a bit misleading: yes, we turned away the Jews (how could we have done that?), as did Canada, but all of them eventually found refuge in England, Belgium, and the Netherlands. It was the refugees to the latter two countries who were rounded up by the Nazis and later killed. Still. . . .

Some of the happy passengers arriving in Belgium: 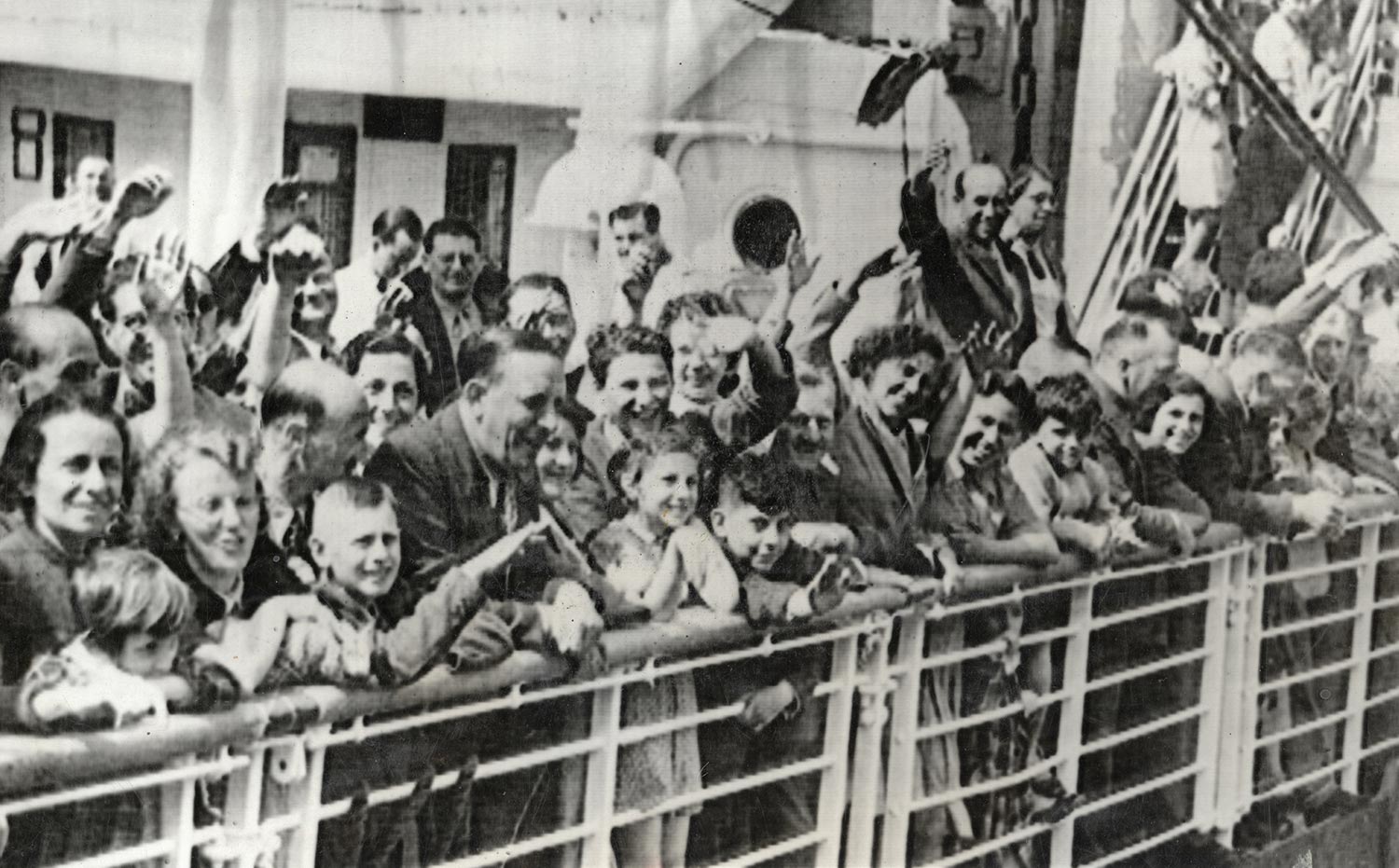 The famous bit of that speech:

*The Washington Post dissects the question of why the overwhelming majority of mass shooters are young men. They talk about developmental differences between the sexes, the prefrontal cortex, and so on, but not once do they mention the word “evolution”! We’re not the only species in which males are more aggressive, violent, and more willing to take risks than females (and we can imagine good evolutionary reasons connected with reproduction), but they should also have noted that most crime in general, including non-mass shootings, are also perpetrated by males.

But they always find somebody to implicate acculturation, which may be a factor but probably not the main one:

Eric Madfis, an associate professor of criminal justice at the University of Washington at Tacoma, talks about “White male grievance,” although he acknowledges that not all the shooters have been White. He suggests the perpetrators are trying to regain control through a “masculine” solution after a long period of frustration.

“We teach boys and men that the only socially acceptable emotion to have is not to be vulnerable and sensitive, but to be tough and macho and aggressive,” Madfis said in an interview.

*According to the Church Times, a British religious site, the Anglican Church is doomed to extinction in the UK, perhaps within four decades. The statistics come from calculating the rate at which believers “infect” each other with faith, qualified by the rate at which believers meet their maker. This is expressed as the statistic “R” (h/t Barry):

The study was compiled by Dr John Hayward, a mathematician at the University of South Wales and the founder of the church-growth modelling site. He analysed data from 13 denominations to calculate their R-rate — a technique more usually associated with calculating the spread of disease.

For a virus such as Covid-19, an R number of more than one indicates that the disease is spreading rapidly, while an R-rate of less than one points to its dying out. Dr Hayward has now applied the same model to church attendance.

He says that he saw the potential of applying R-number modelling to church growth in 1999. “The analogy works when existing church members add new members through personal contact, whether directly or indirectly,” he writes in his report.

He analysed attendance data from between 2000 and 2020, and found that Church of England and Roman Catholic churches across the UK have R numbers of just over 0.9. Their congregations could vanish by 2062, he concludes.

It’s appropriate to use an infection rate since, as Hitchens said, “Religion poisons everything.”

*In the NYT, sports writer Kurt Streeter asks a good question: why, among all sports, is the popularity of women’s tennis about equal to that of men’s tennis, when the sex-based athletic differential applies across many sports? Streeter says the answer is complicated, but in fact offers only one solution: women in other sports are too much “in your face”!

We still live in a world where strong, powerful women who break the mold struggle for acceptance. Consider the W.N.B.A., stocked with outspoken women, a majority of them Black, who have shown a communal willingness to take aggressive stands for L.G.B.T.Q. rights, reproductive freedom and politics. How do you think that goes down in many corners of America and the world?

Yes, tennis often has a few outspoken players willing to publicly buck against power. In the game’s modern era, Venus and Serena Williams did it just by showing up and dominating. Naomi Osaka bent the rules with her face masks protesting for Black rights. But the vast majority of women in tennis wear their significant power quietly, behind the scenes, and in a way that does not overly upset the male-dominated status quo. To think that this is not a factor in the pro tour’s popularity would be foolish.

Well, call me foolish, but I’m not buying this explanation. And I have no alternative, either. But I love watching women’s tennis, although basketball or baseball don’t attract me. I prefer watching women’s gymnastics, but the Big Show for that sport comes only once every four years.

*From the Insider, clever California judges took advantage of the literal law itself to protect bumble bees.  See explanation below the tweet, and a longer bit about the ruling, including the ruling itself, here.  (h/t Matthew, Ginger K.)

"The issue presented here is whether the bumble bee, a terrestrial invertebrate, falls within the definition of fish," the judges wrote in their ruling. And, they concluded, it does.”

California court rules that bees are a type of fish https://t.co/DmCcRBFEkd

A trio of judges in California said on Tuesday that bees could be legally classified as a type of fish as part of a ruling that gave added conservation protections to the endangered species.

“The issue presented here is whether the bumble bee, a terrestrial invertebrate, falls within the definition of fish,” the judges wrote in their ruling. And, they concluded, it does.

Formerly, the problem for bee lovers — and lovers of all Californian terrestrial invertebrates — was down to the way protected animals had been classified in the state’s laws.

While four bee species were classified as endangered in 2018, land invertebrates are not explicitly protected under the California Endangered Species Act, which protects endangered “native species or subspecies of a bird, mammal, fish, amphibian, reptile, or plant.”

But the law’s fish and game code, which establishes the basis on which plants and animals are protected, defines “fish” as “a wild fish, mollusk, crustacean, invertebrate, amphibian, or part, spawn, or ovum of any of those animals.”

*The Wall Street Journal asks and answers the perennial question, “Why do ducks get in a row? To swim better.” The answer is that ducklings do it under the right conditions as a way of using wave motion to move forward with less energy—to draft.

The thing is, though, I covered and explained this issue in depth last October.  Who’s a good boy? Who scooped the Wall Street Journal? Show me justice!

Meanwhile in Dobrzyn, two new friends are going for walkies:

A: Are you coming in?
Hili: No, I’m waiting for Szaron. 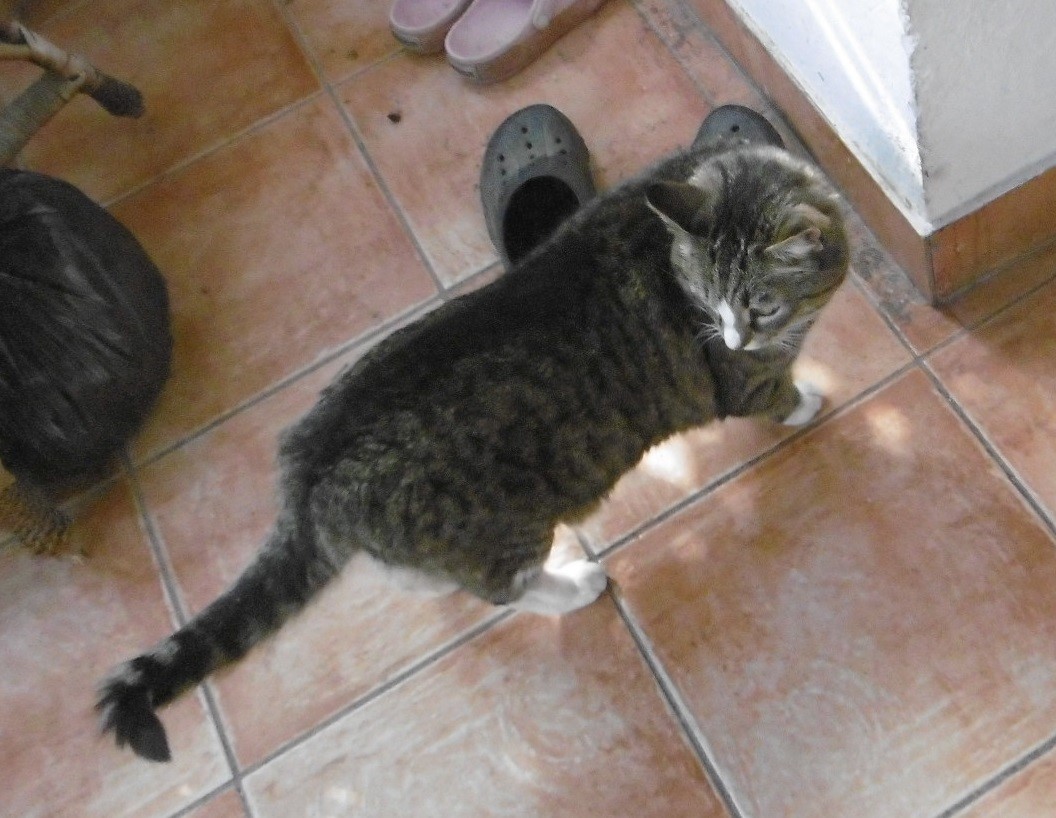 A picture of baby Kulka: 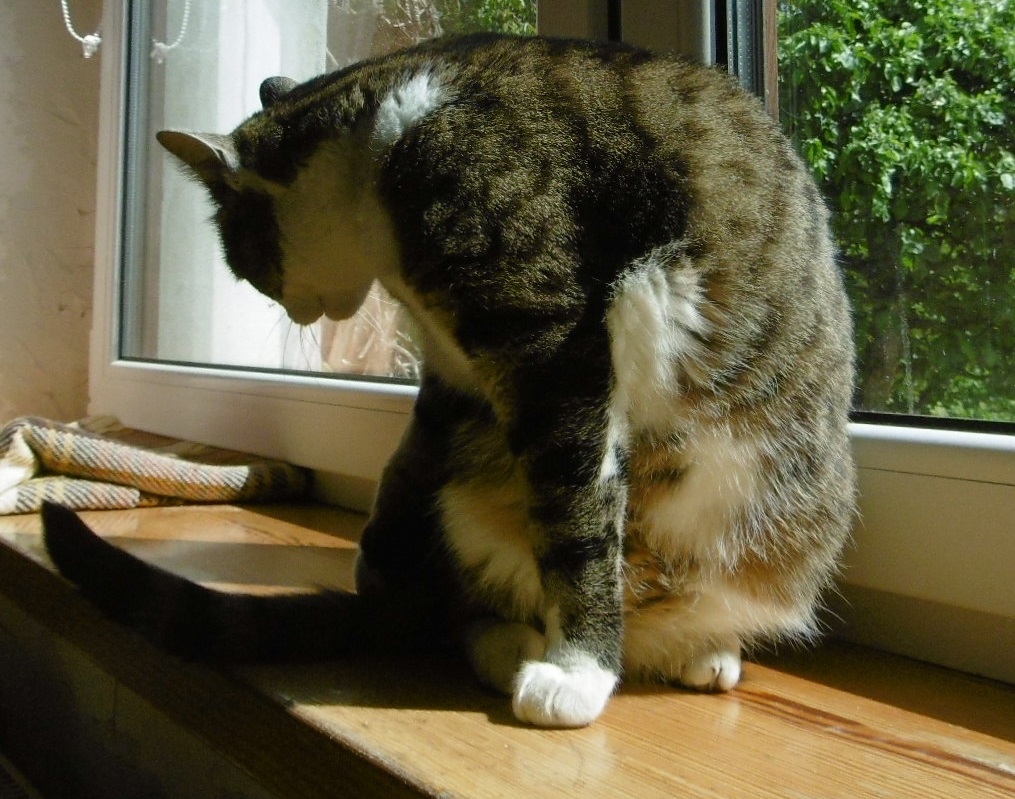 And a rare Mietek monologue, as the ginger cat greets the weekend:

Mitek: Is it Saturday yet?

And a picture of Karolina in  back in Kyev, holding the Great Children’s Encyclopedia (note the cat ears)

Caption:  From yesterday’s mail. According to Natasza, Karolina is quickly making up for lost time.

From reader Pliny the in Between’s Far Corner Cafe:  Some people who believe in evolution are still arguing how we could all have descended from a literal mated pair of Homo sapiens. It’s not true. 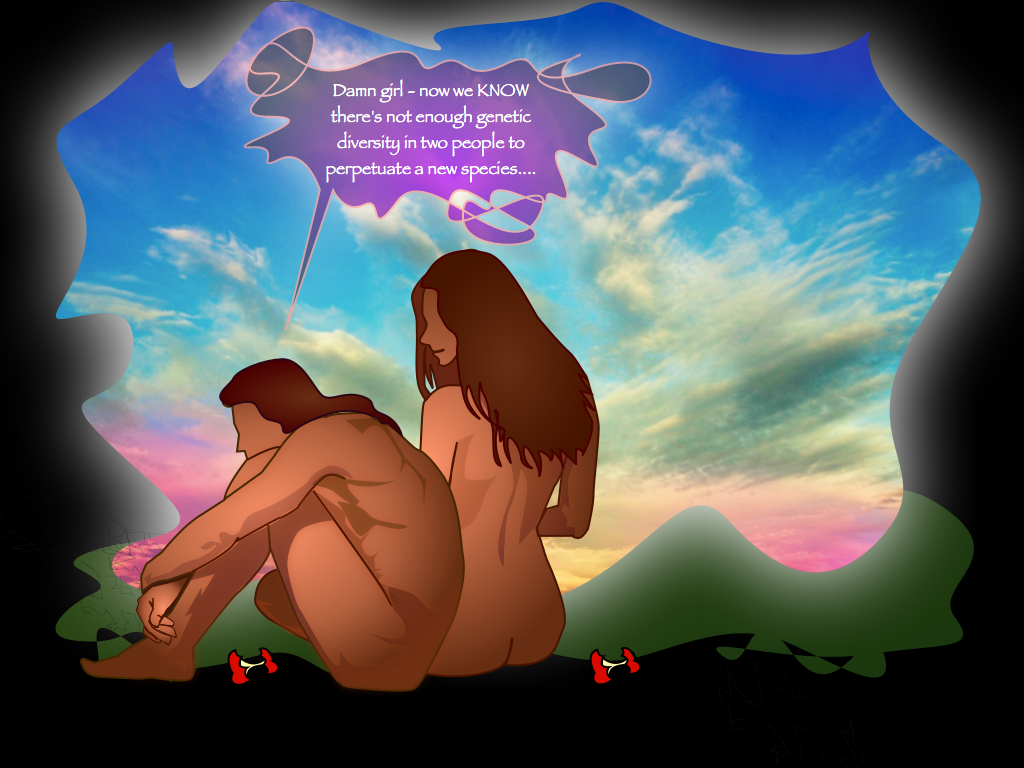 Paula found a picture of a Queen’s Jubilee Cake in a Facebook foodie group. Here it is! (Not a great likeness. . .  ) 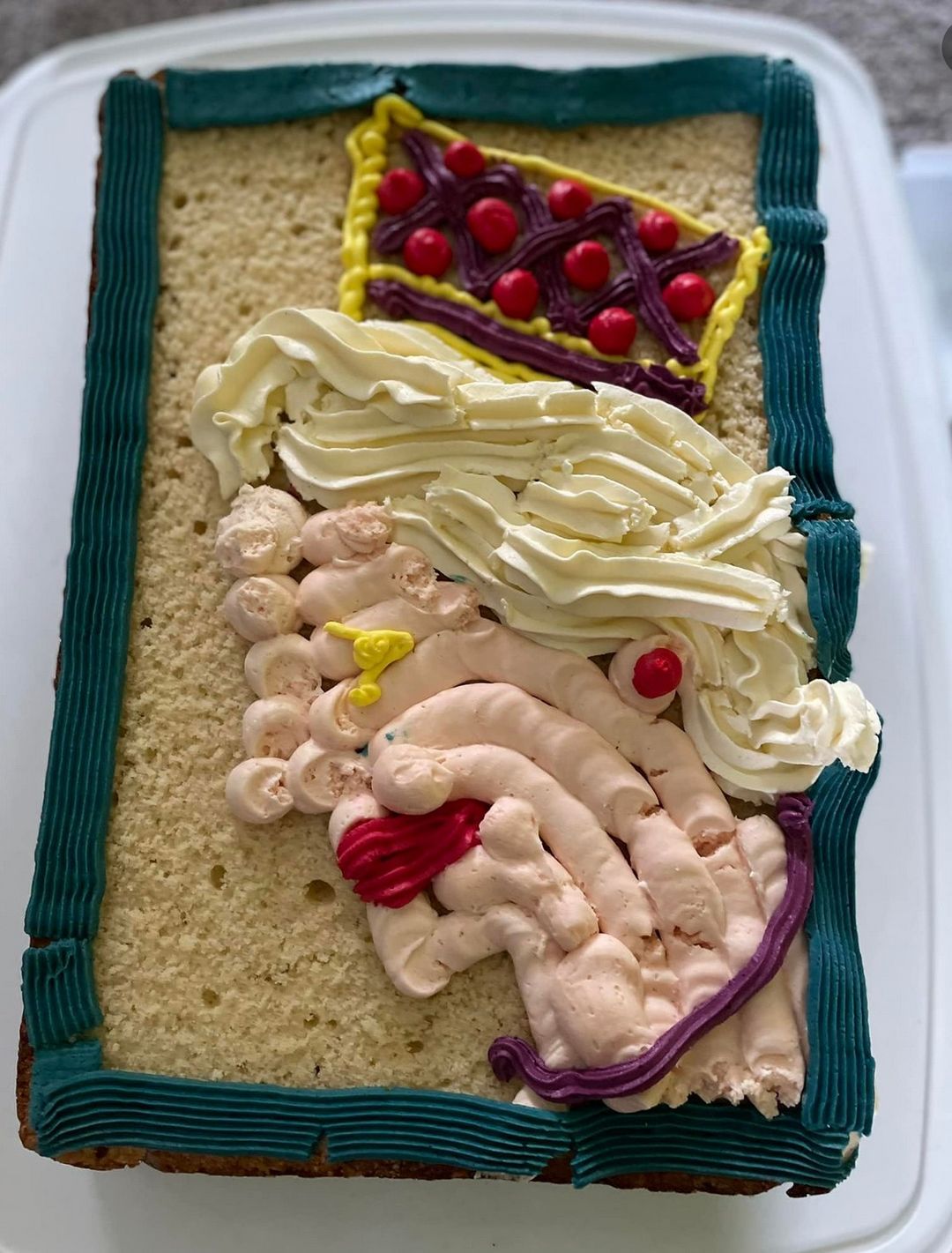 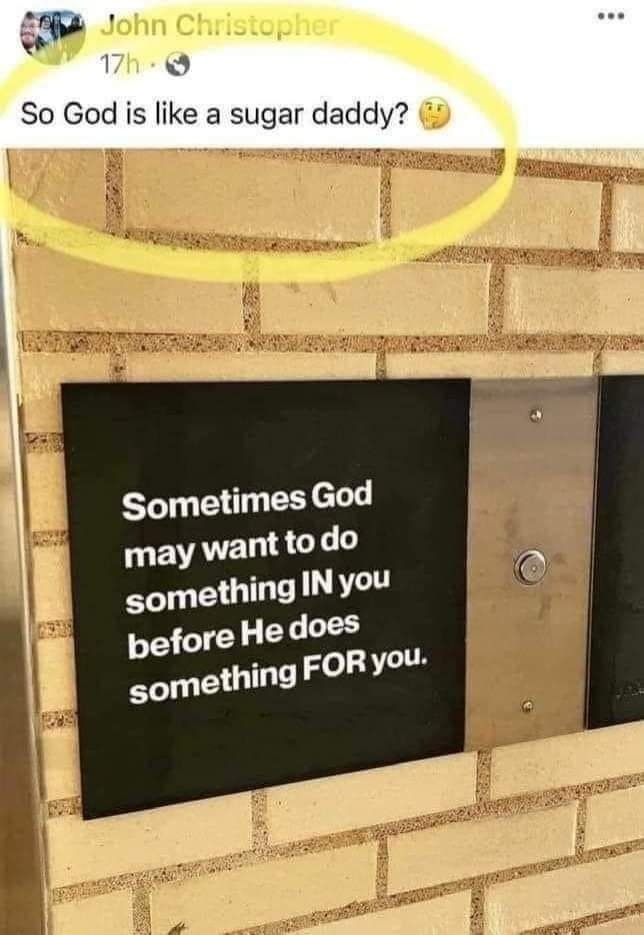 Ricky Gervais has a new Netflix special, “Supernature,” but I haven’t watch it. Here, however, is a relevant tweet:

Thanks for all your amazing tweets about #SuperNature.
It really means a lot. Here's my cat that's meant to help me live longer 😂 pic.twitter.com/xUF4LO6LRf

Here’s an interesting analysis by a YouTuber and avowed feminist, explaining why Amber Heard came out second in the Depp/Heard fracas. It involves many tweets, but I found it useful. The short take: Heard’s evidence (and her own testimony) apparently didn’t prove credible to the jury.

Here’s why Amber Heard lost. According to the law and the facts. 🧵 Johnny Depp sued Amber heard for defamation of character. So he had to prove by “a preponderance of the evidence” that AH published a statement, that was false, that harmed his reputation, that was about him…

From Barry, apparently a serious attempt to discredit evoution:

IN CONCLUSION: Based on the ample evidence I have laid out, it’s very clear that I should definitely be allowed to bite those pic.twitter.com/aQlLEVIYhQ

Tweets from Dr. Cobb, who’s enjoying the holiday for the Queen. He’s not a fan of the royalty, though. About this tweet, showing Boris Johnson getting booed, Matthew says,

“Good news from the events at St Pauls. Worth listening to. If the union-jack bedecked loons are booing him, it means something.”

The Prime Minister @BorisJohnson arriving with wife Carrie at St Paul’s Cathedral for the Platinum Thanksgiving Service is booed by some in the crowd@BBCNews pic.twitter.com/rHbBgX8Jzh

They were so small 🥺 https://t.co/FYrBqnm4dn

And one of Matthew’s beloved optical illusions: