Well, here’s an interesting argument in Tablet from one of my colleagues, Eliot Gershon, a professor of both psychiatry and human genetics at the University of Chicago. (Gershon, who is Jewish, says he does not consider himself to be white, though he doesn’t specify which race he identifies as belonging to.) And that is one of the points of this article. The title tells it all: let people choose their gender and race, but give no group any advantage or disadvantage over another.  In other words, no affirmative action, but freely accept everyone’s identity. 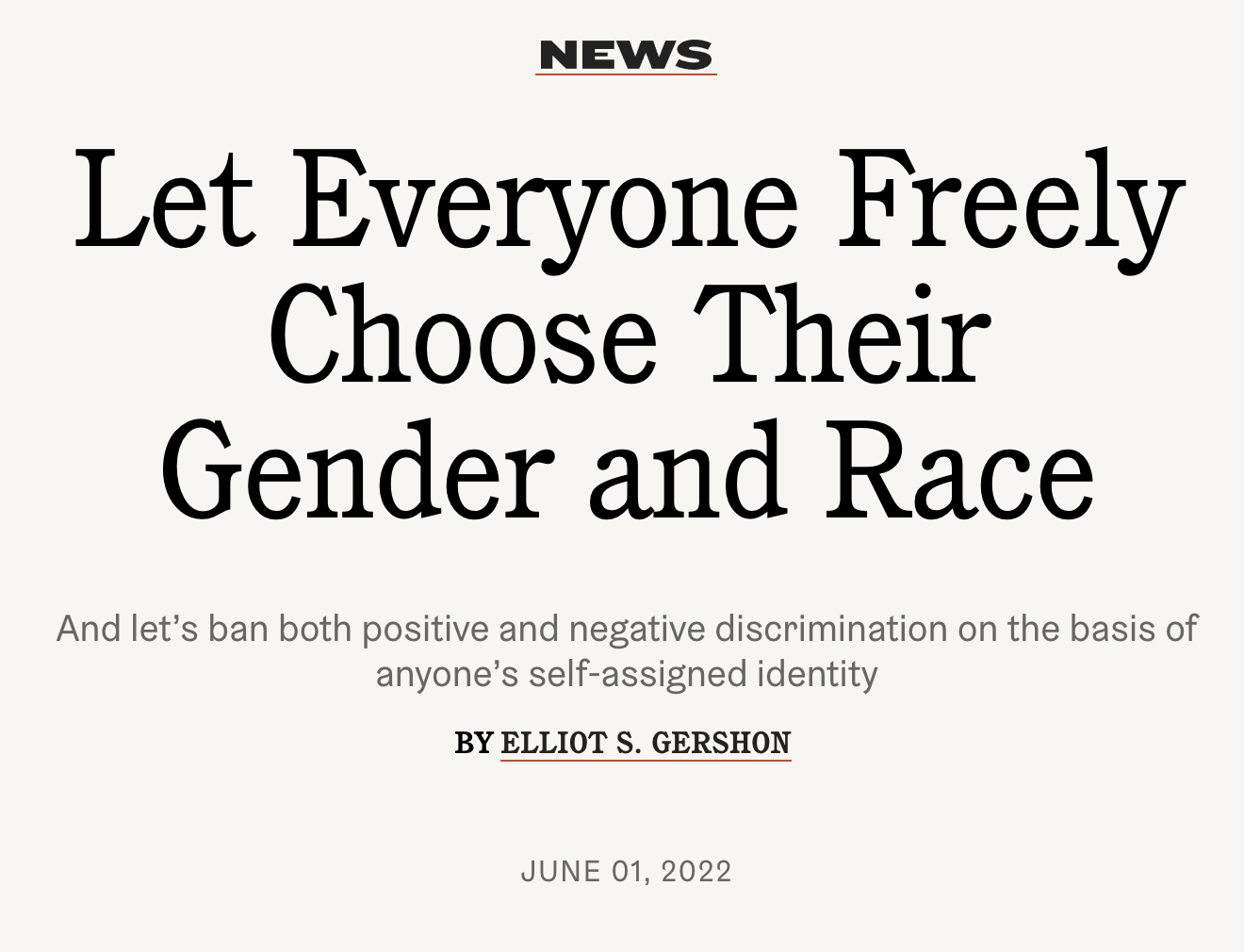 Gershon runs through a number of reasons why he opposes affirmative action, or any programs that favor groups based on identity (presumably he doesn’t oppose programs of aid based not on identity but on circumstance, like being poor or disabled). His arguments rest largely on those of Thomas Sowell, a conservative black scholar who laid out his views in a 1989 Commentary article, “Affirmative action: a worldwide disaster.” Gershon agrees: no privileging or disadvantaging people based on gender, race, or other identities.

On the other hand, he recognizes the difficulties of the way “race” is used as a social construct. He himself, as I said, doesn’t identify as “white” although he looks white. Gershon notes that people have only a small fraction of black ancestry can still identify as black, and reap affirmative-action benefits from it. (That reminds me of Elizabeth Warren’s claim to be Native American).

Gershon’s solution: allow people to choose whatever race they identify as, and respect that choice. That would make Rachel Dolezal black, and I agree with that stand to some extent. (Others don’t, saying that Dolezal “pretended” to be black. She did dissimulate, but I do believe she really felt she had a black identity.) Even if you don’t agree with Dolezal’s claim, under Gershon’s scheme only those who really felt they were members of other races or genders would declare that, for they’d have nothing to gain by “pretending.”

Gender identity is widely accepted as a matter of choice for everyone. But gender fluidity is a doctrine, and it generates resentments. Many parents of young children resent fluid-gender-identity education programs; they have their own understanding that children in those ages should be encouraged to integrate and solidify the gender identity of their natal sex. Gender transition has also led to widespread resentment when male-to-female transgender athletes win prizes competing against girls and women who are born female. Yet in the same political and social context where gender is held to be a matter of choice, race is considered immutable. Any person can be accused of having “white privilege” or “unconscious bias,” regardless of their actual ancestry or beliefs.

Although there is a case to be made for gender transitions, there is a stronger case to be made for racial transitions. Gender as a social construct is very closely related to biological sex, an unambiguous characteristic of the vast majority of humans. Race is also a social construct, associated with statistical differences among population groups. Race, however, does not have a rational or scientific definition unambiguously applicable to all individuals, and for many people it is impossible to determine—leading to casually racist assumptions based on skin pigmentation or “one drop” theories that lack any legal or scientific currency.

The historic Supreme Court opinion of Plessy vs. Ferguson, which upheld racial segregation in 1896, involved Homer Plessy, an “octoroon” (a person of seven-eighths white and one-eighth Black ancestry) who was found riding in a whites-only railroad car. The popular and accepted concept at the time was that any amount of Black ancestry made a person Black, and this definition persists until this day. But how is it rational to call a person with Plessy’s ancestry Black rather than white?

There is nothing pure about race. As a category, it is remarkably fluid. In a modern American urban population, we statistical geneticists frequently find people who self-classify as white or Black but whose genotypes are ambiguous. People with the same amount of “white” or “Black” ancestry may identity with either race, or with neither race. Many people who are identified as “Latinx” by Harvard would identify themselves as “white,” while many “whites” would identify themselves as something else, based on ancestry, upbringing, culture, or personal affinity. Why should the state or private elite institutions be empowered to impose these slippery and often poorly framed identities on individuals without their consent, especially when the social cost to the society of doing so is real?

One way out of our current identity conflicts is to permit individuals to freely choose their own racial and gender identities and at the same time to forbid any societal rewards or penalties based on these identities. Chief Justice John Roberts famously opined in the 2007 Parents Involved in Community Schools (PICS)case, “The way to stop discrimination on the basis of race is to stop discriminating on the basis of race.” This does not fit the current sociopolitical milieu, but it would avoid the unwarranted beneficiaries and casualties of this milieu. Pursuing race- and gender-blindness under the law is preferable to enforced alternatives that have consistently failed for more than a century.

What do you think? I still believe in implementing some affirmative action, but perhaps it could be based not on race or gender identity, but on poverty or other circumstances that disadvantage people not based on their identity. (That would, of course, still give an advantage to minorities over nonminorities, but that would be a side effect of correcting inequities). In some ways affirmative action based on need rather than identity or race does seem fairer.

But I’ll have to think about this as I must go feed my ducks.

Comments very welcome below. This is an interesting idea!

33 thoughts on “A novel idea about identity and affirmative action”