It’s been a while since Doug Hayes sent us his “Breakfast Crew” photos of birds at his home feeders, but here’s a new batch. Doug’s captions are indented, and you can enlarge his photos by clicking on them:

Another installment of the Breakfast Crew from Richmond, Virginia. These photos were taken from January to about a week ago. The first crop of babies has started to show up: starlings, mockingbirds and Carolina wrens so far. We should be seeing some baby Cardinals soon.

House sparrow (Passer domesticus) not letting a bit of snow get in the way of a free meal. 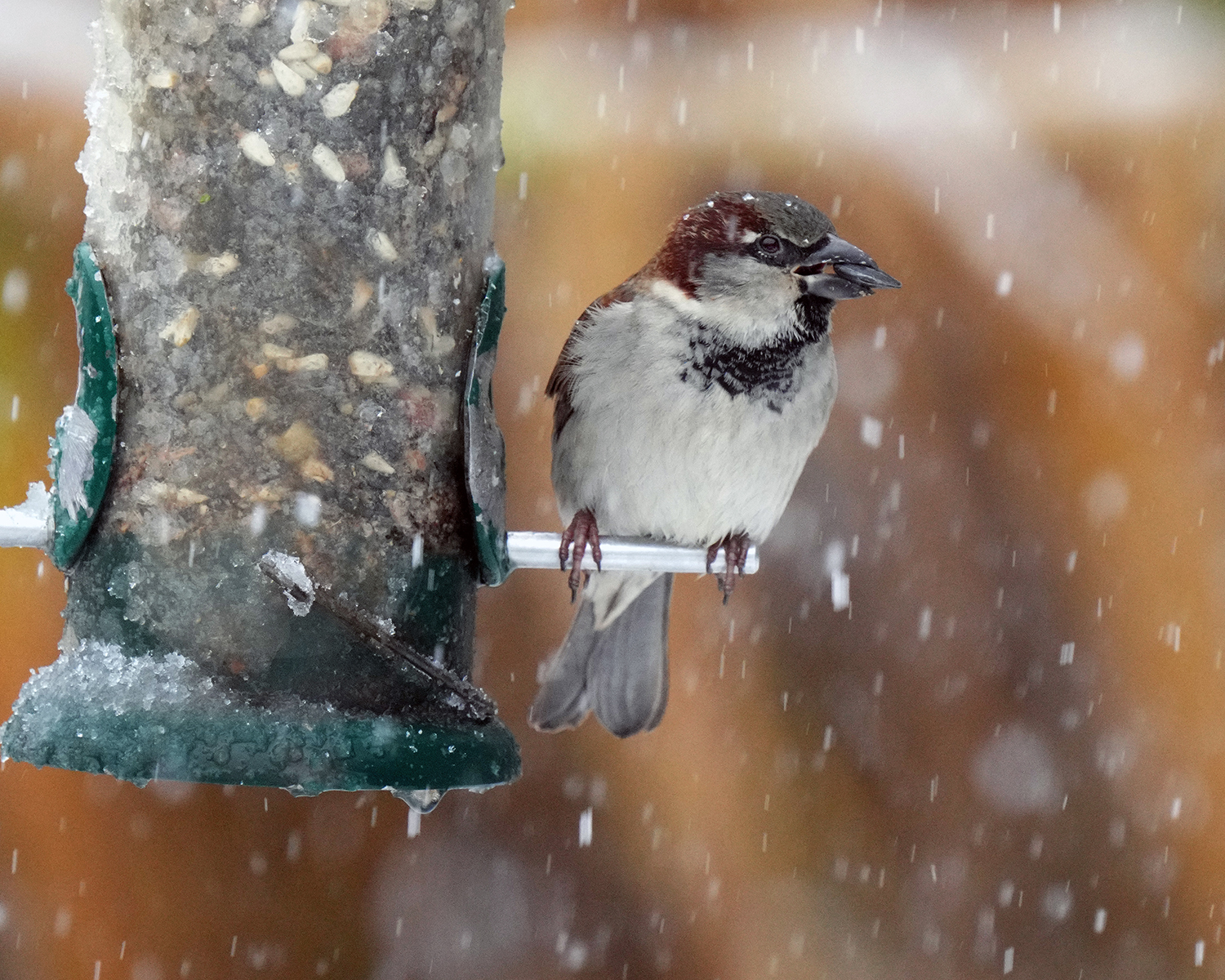 Blue Jay (Cyanocitta cristata) We don’t see very many of these around the yard as they prefer the more heavily wooded areas around Forest Hill park and are a bit skittish, flying away when they spot humans or dogs. 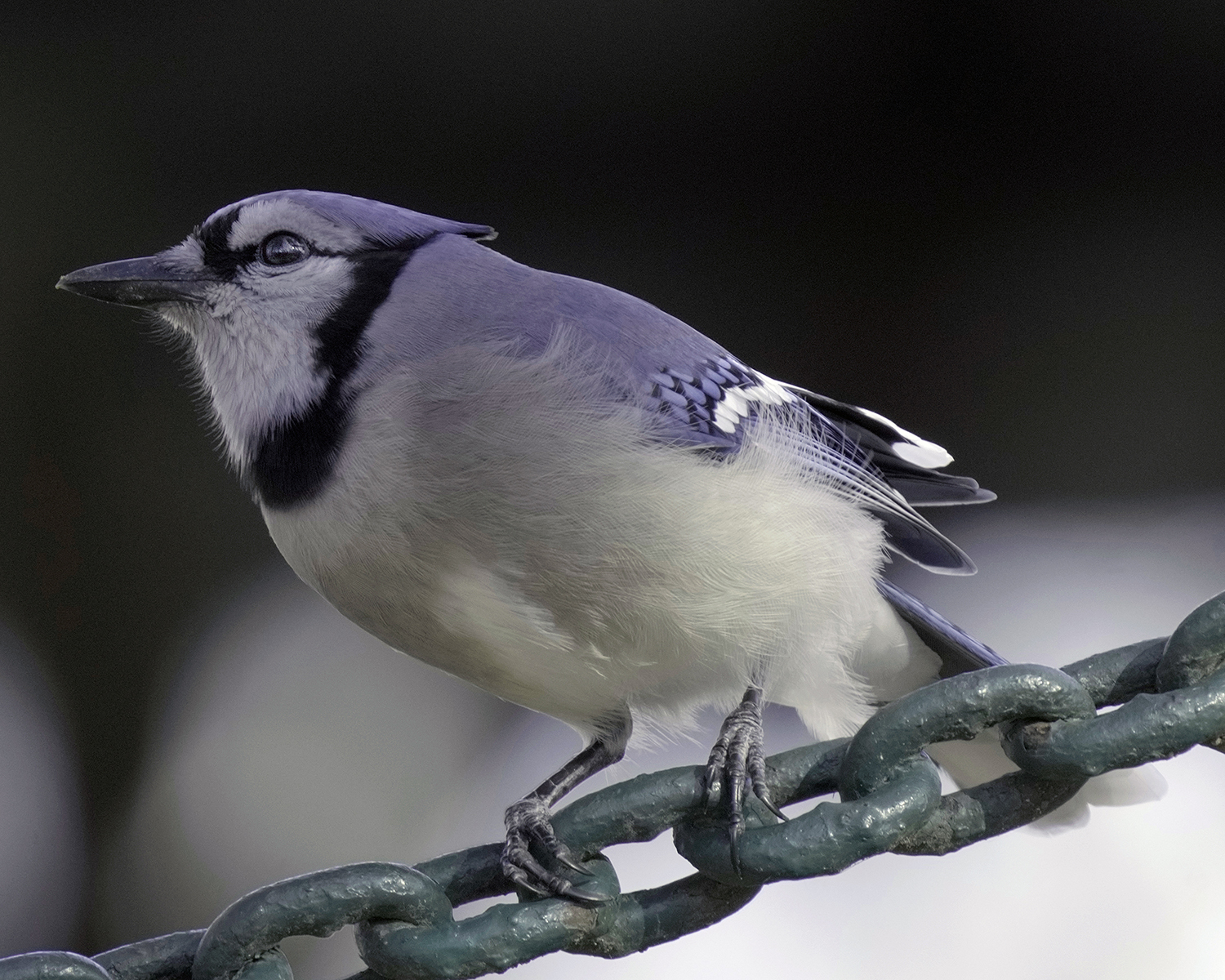 Carolina Wren (Thryothorus ludovicianus) There has been a population explosion among the Carolina wrens. There are over a dozen regulars who show up almost every day. They are very curious birds – they have to check out every box or item left lying around. 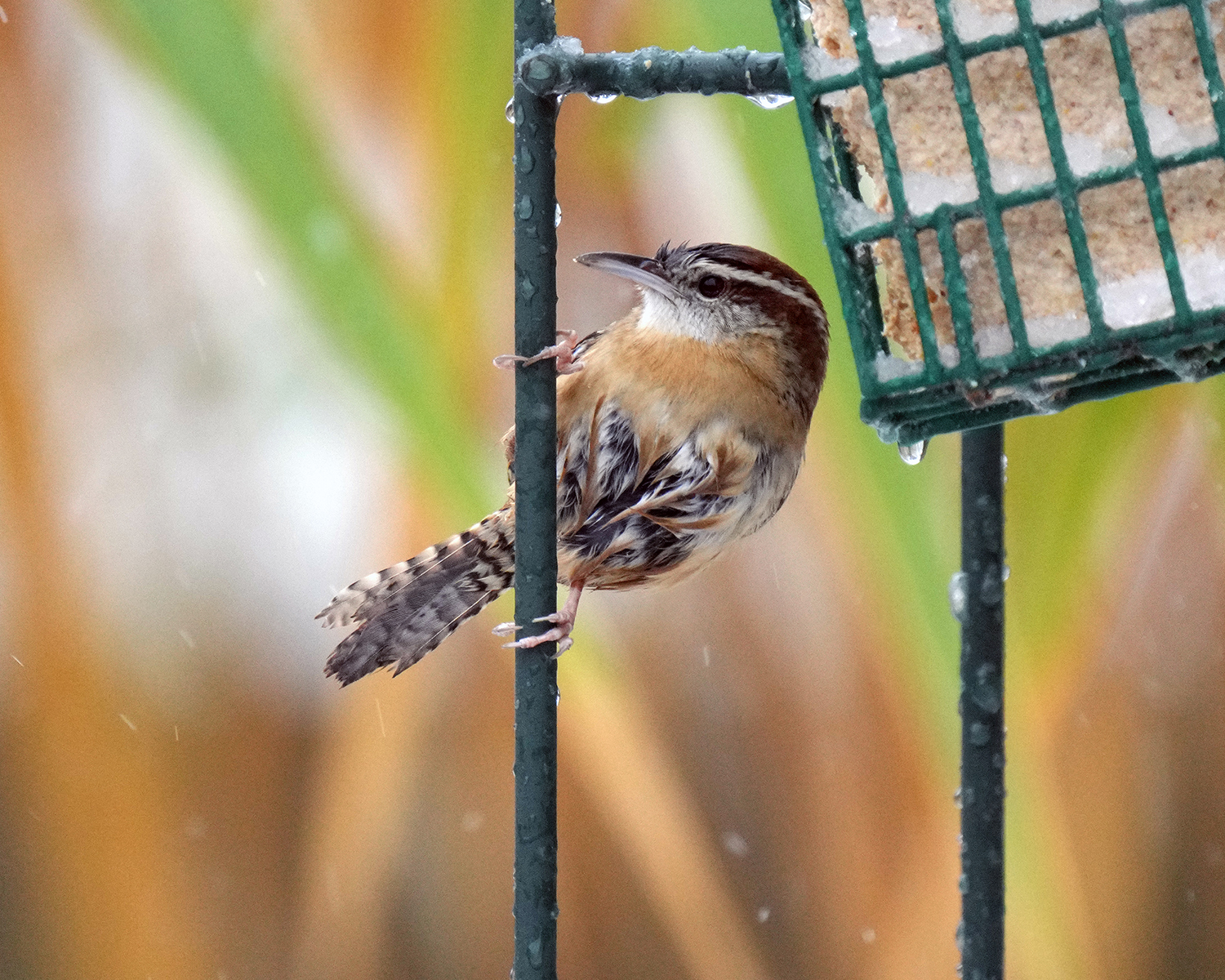 Northern Mockingbird (Mimus polyglottos) This has also been a good year for mockingbirds, with more of them in the neighborhood than previous years. 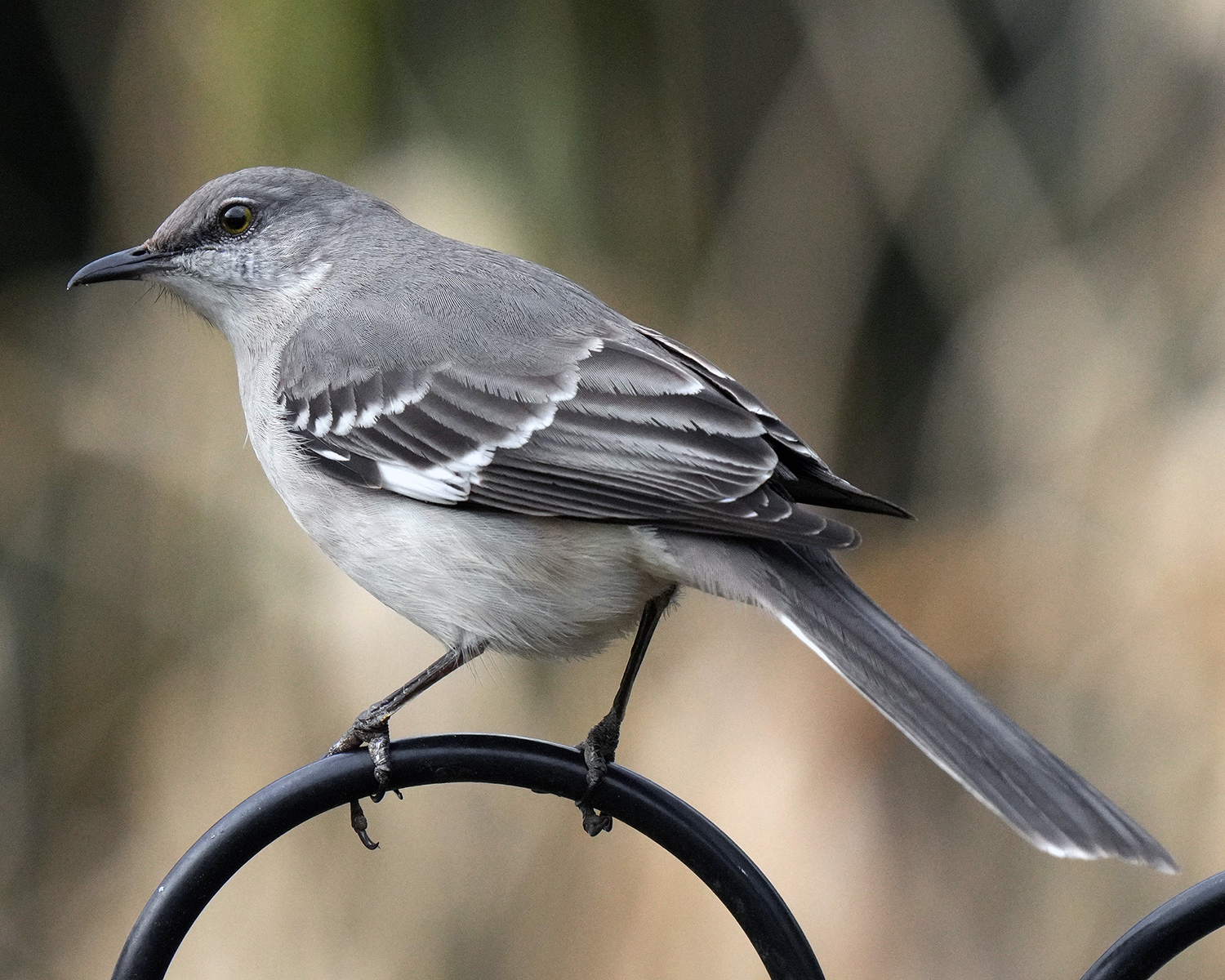 Northern Cardinal (Cardinalis cardinalis): probably the most common bird in the yard. They tend to be the first arrivals shortly after sunrise and are the last to leave after sunset. 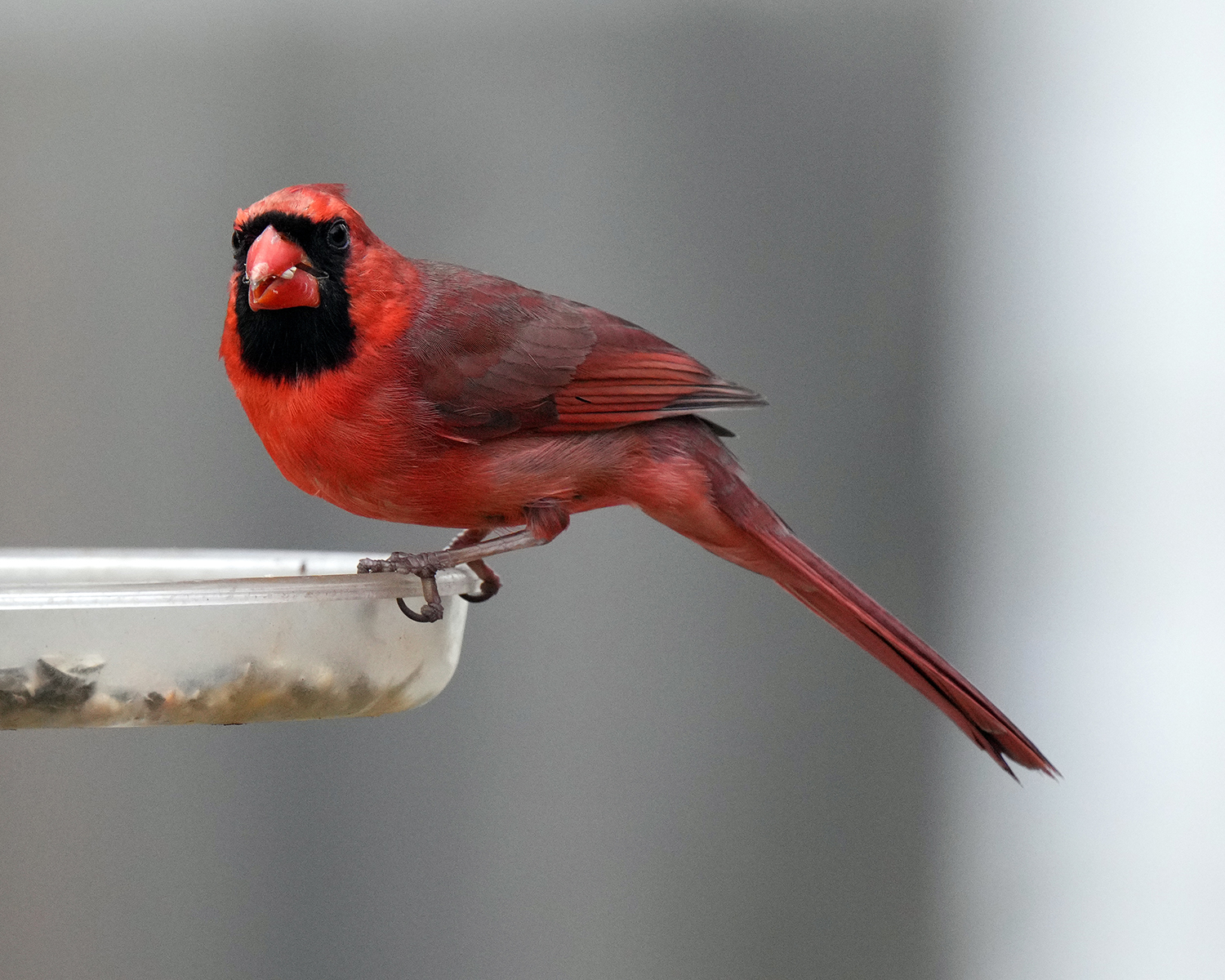 House Finches (Haemorhous mexicanus) Shot in early spring, this pair is engaging in “courtship feeding”. The male will keep the female fed while she is brooding. He will also gather food for the babies when they hatch. 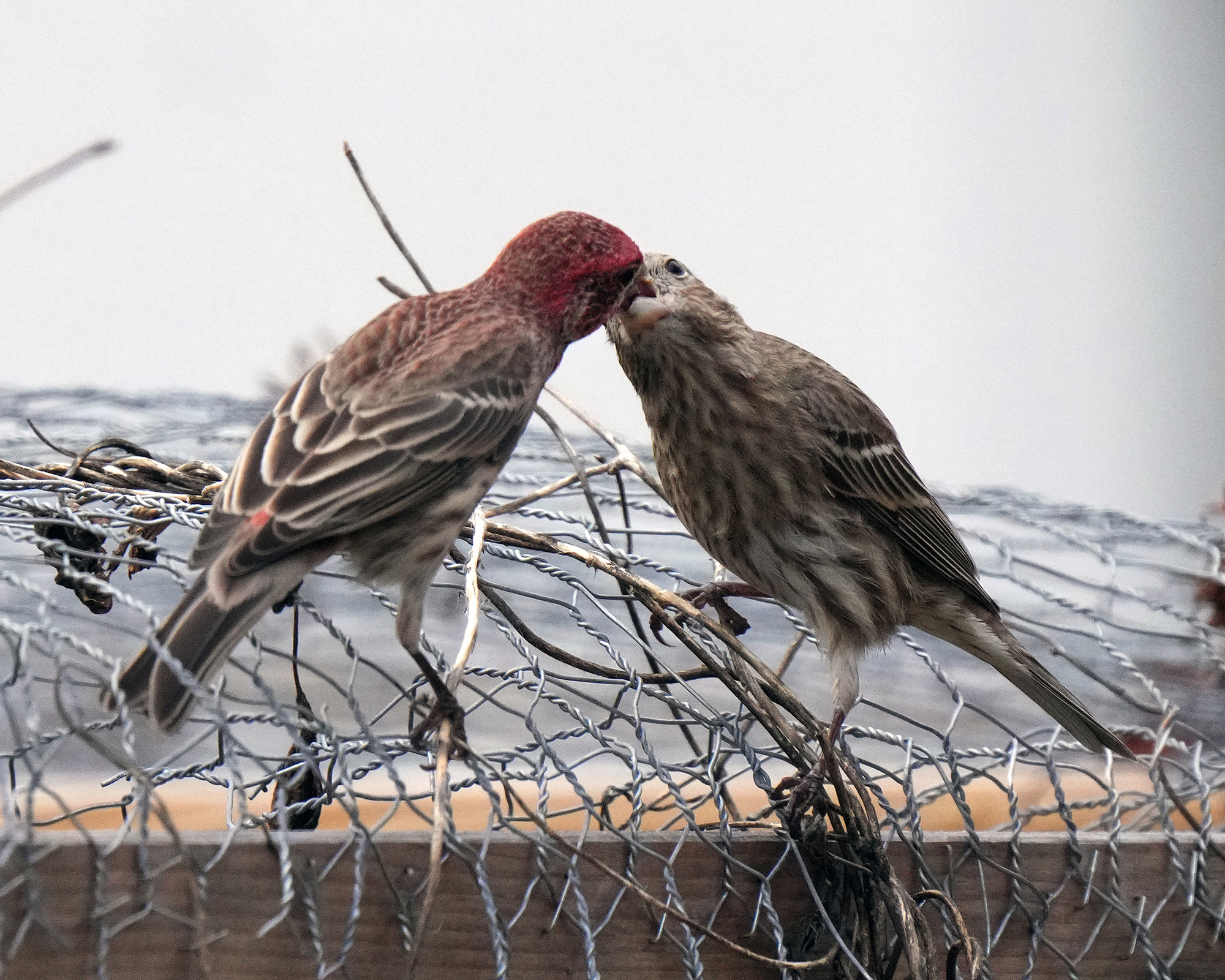 Brown Thrasher (Toxostoma rufum) Although they usually keep to the brush at the rear of the yard, this one has developed a taste for suet. 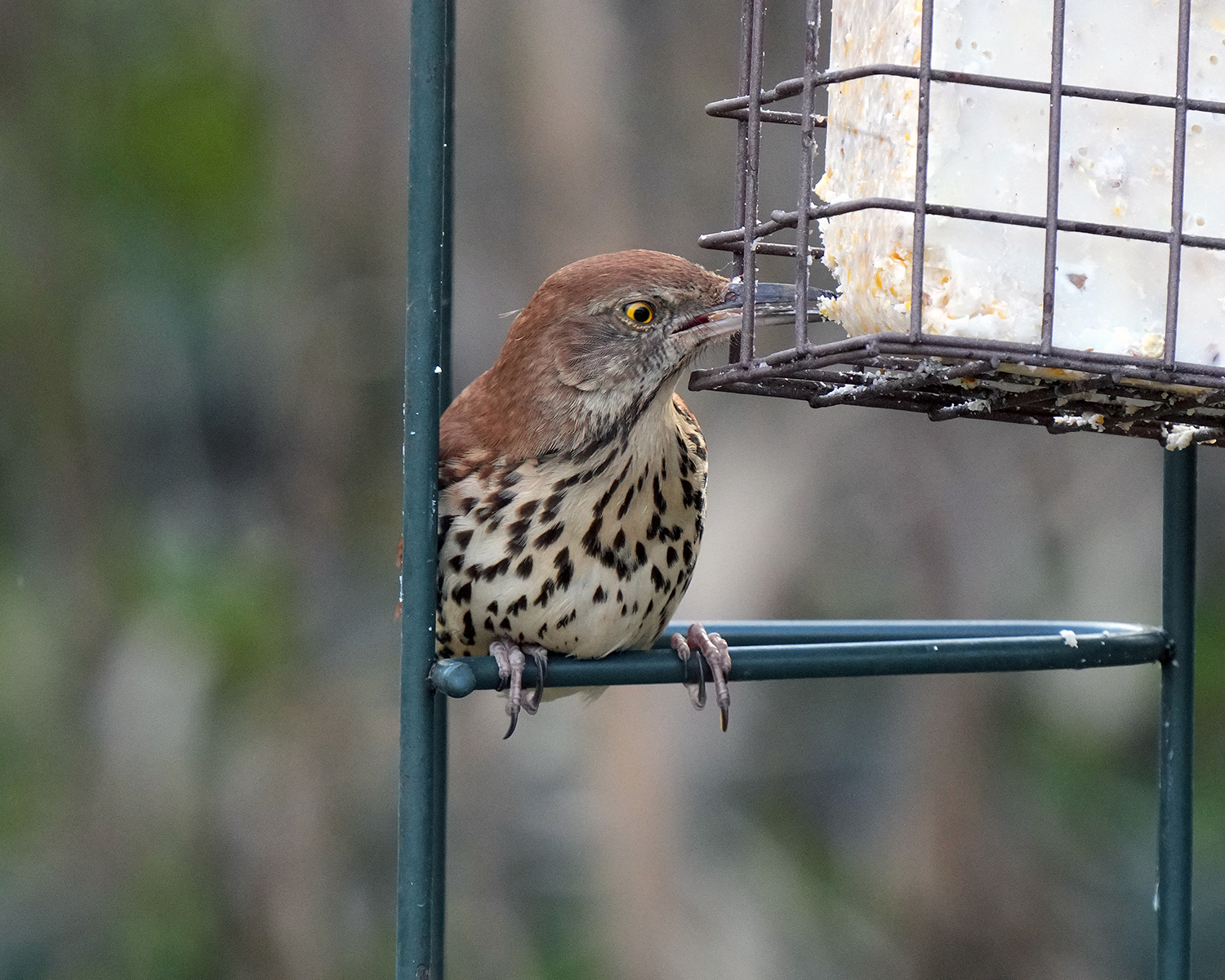 Cedar Waxwings (Bombycilla cedrorum) A huge flock of these birds showed up a few weeks ago. The entire flock goes from a large cedar tree about two blocks away to the trees in my next door neighbor’s yard. They will go back and forth between the two yards several times a day. 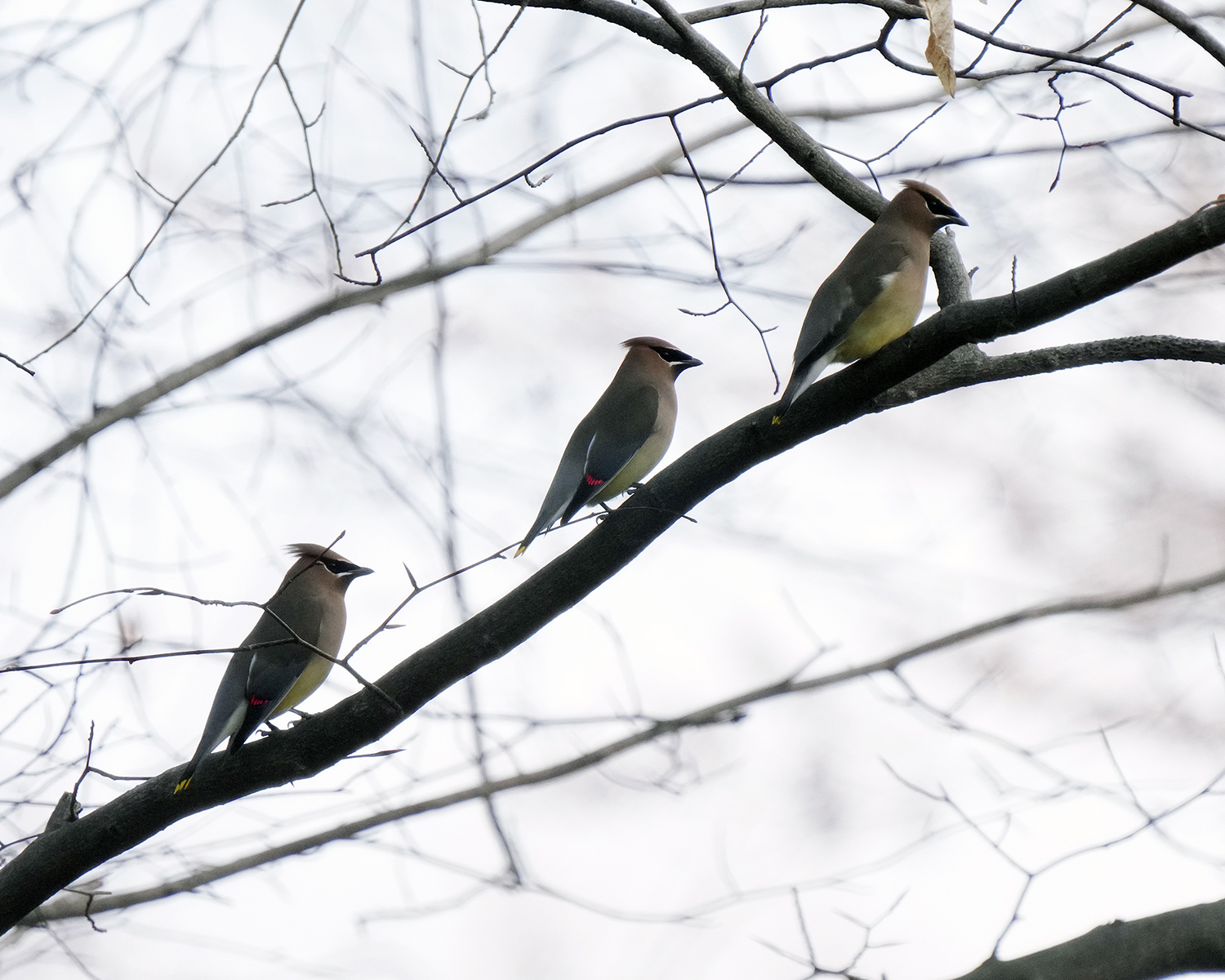 Mourning Dove (Zenaida macroura) They hang out in the yard much of the day. They alternate perching on the feeders with scavenging seeds on the ground. 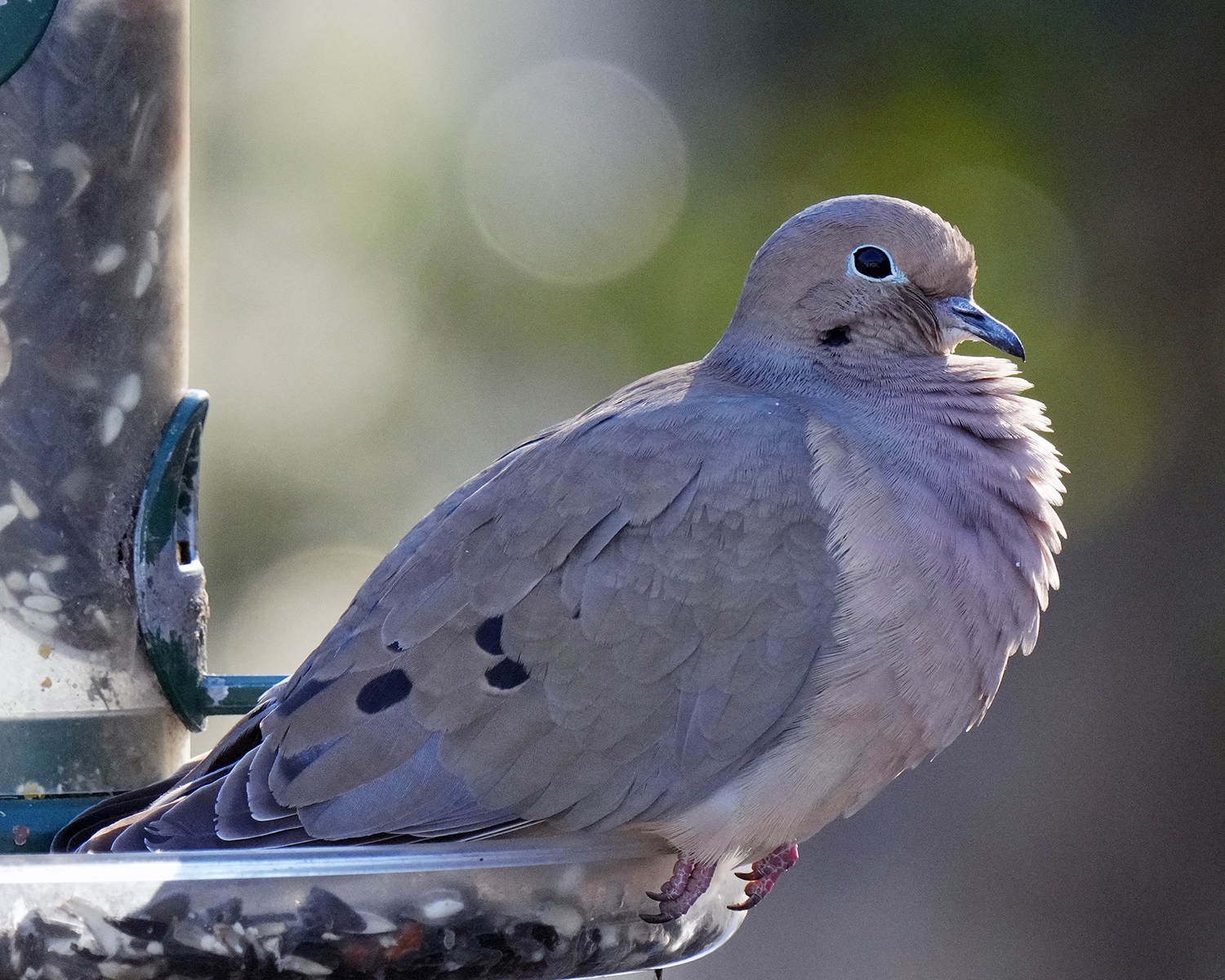 Tufted Titmouse (Baeolophus bicolor) One of the more numerous small birds that visit the feeders. They grab a choice morsel and fly off to a safe location to eat. 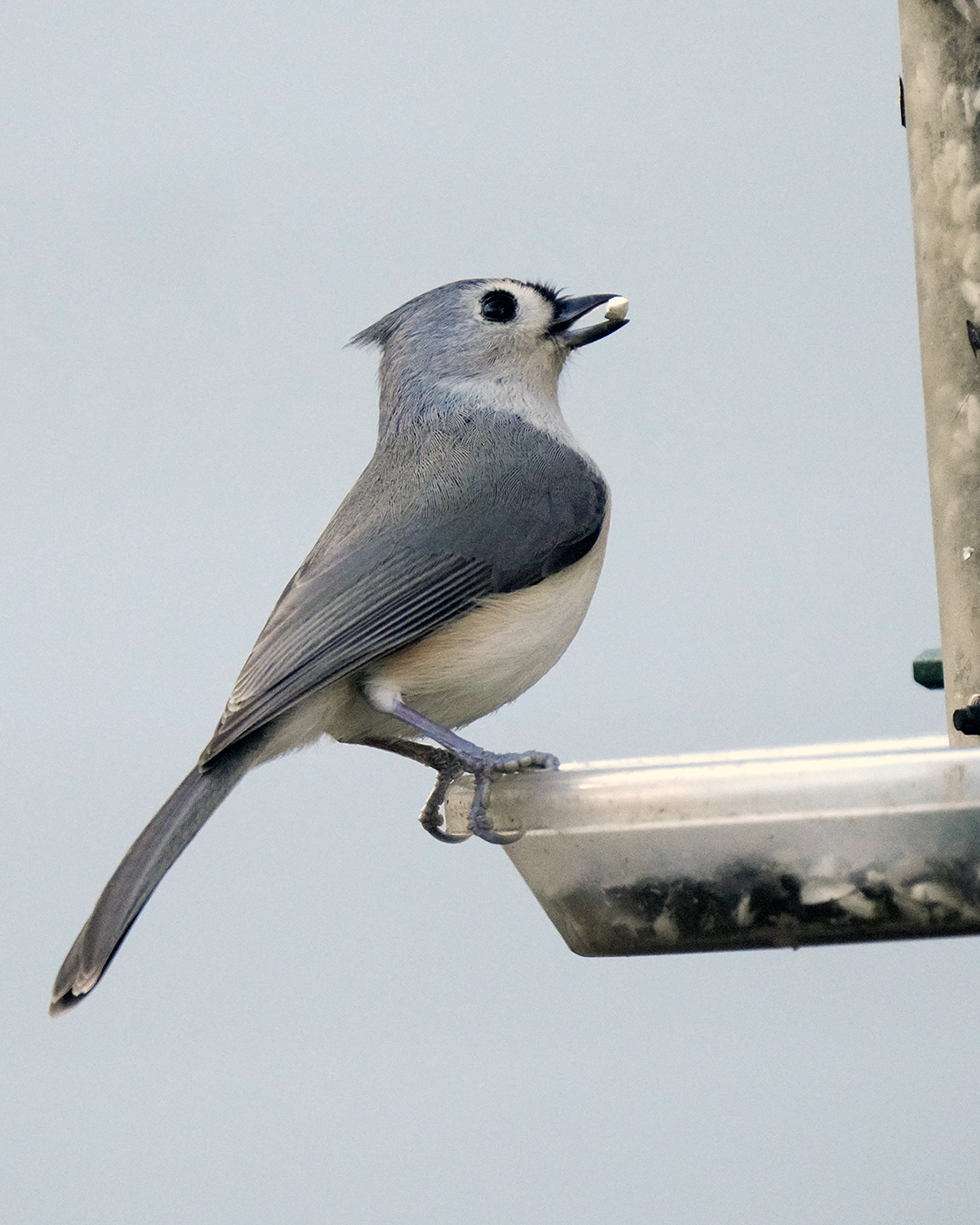 American Robins (Turdus migratorius) This birdbath is obviously not big enough for the three of them. 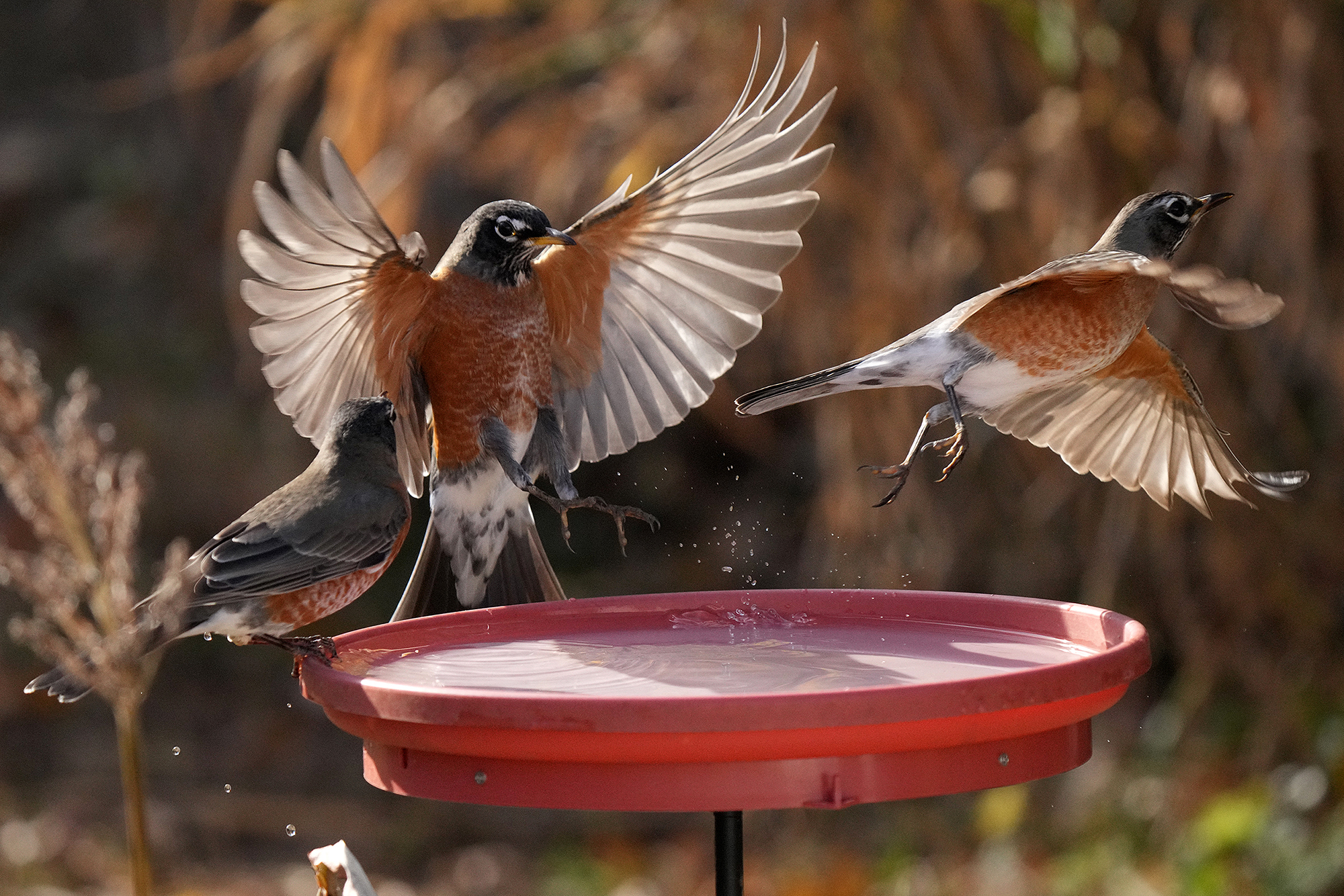 Common Grackle (Quiscalus quiscula) These birds are fairly common around the yard. The camera’s eye autofocus has no problem locking on to these birds’ eyes. 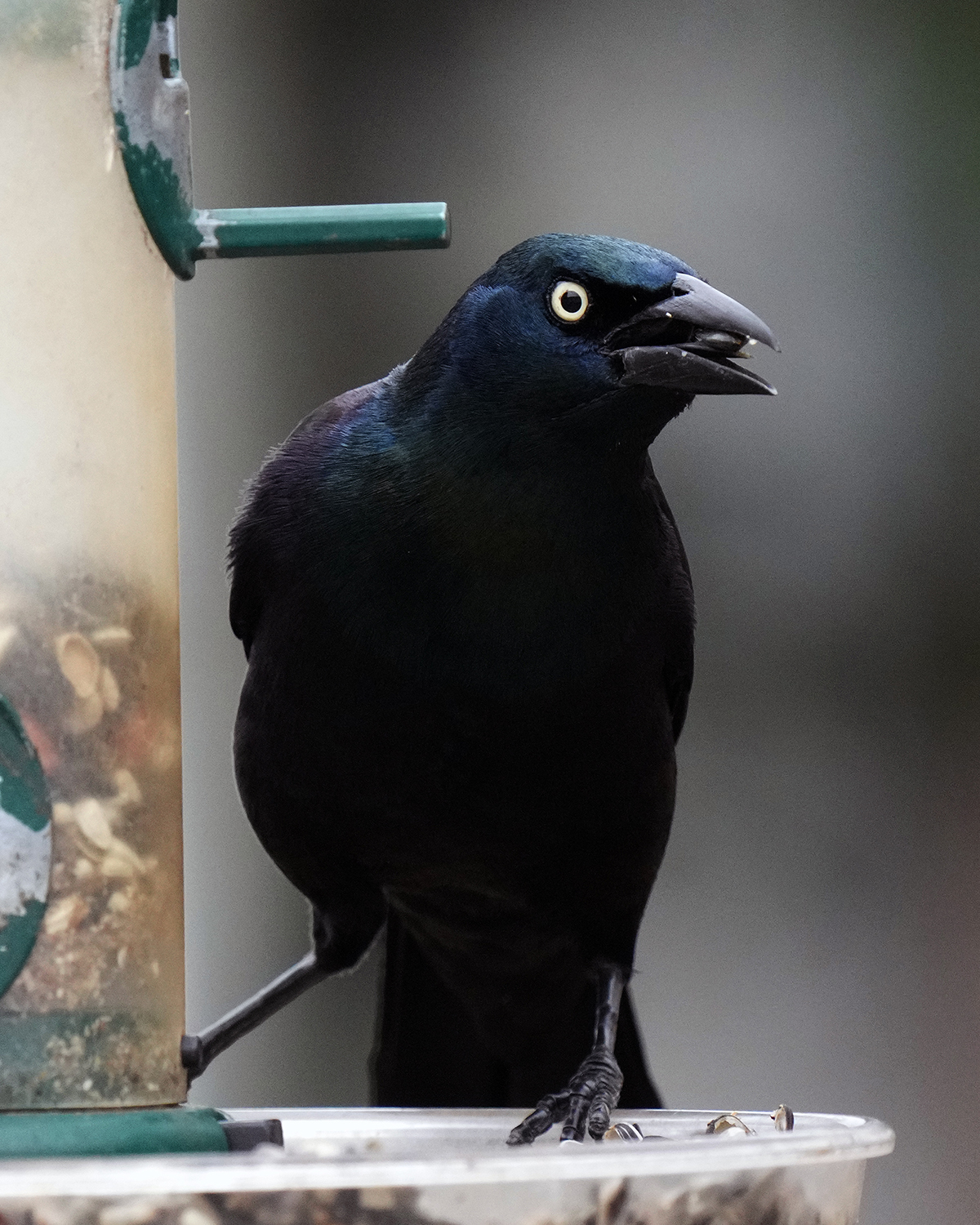 Ruby-throated hummingbird (Archilochus colubris) I had seen hummingbirds zipping around the yard a few weeks ago and decided to put the nectar feeder out. No more than an hour later, this one showed up for a drink. 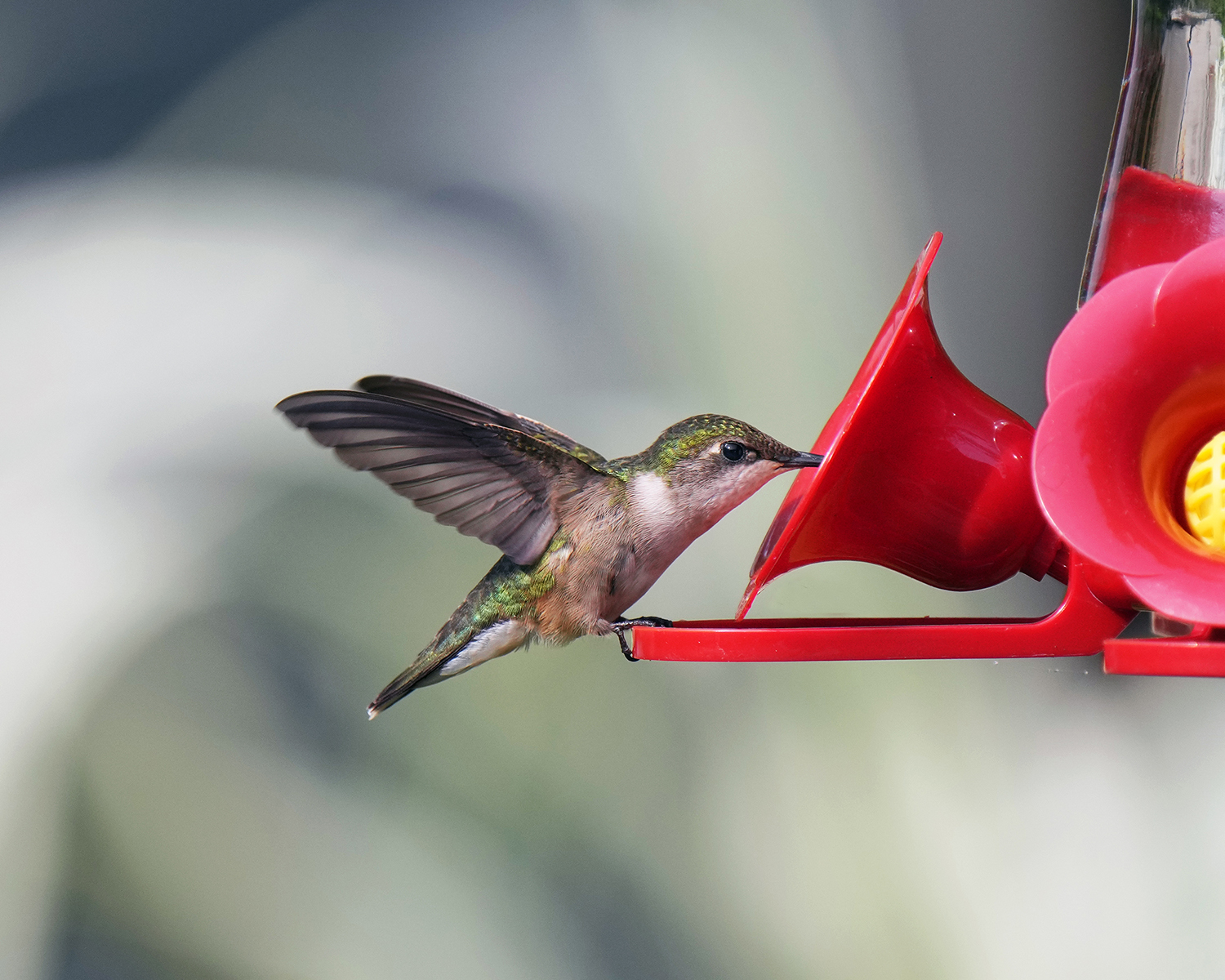 Chip Monk, the Eastern chipmunk (Tamias striatus) Chip lives in the base of our home generator. She is most active early mornings and during rainy weather. Although she mostly scavenges around the seed feeders, I have seen her climb the trellis to eat suet. 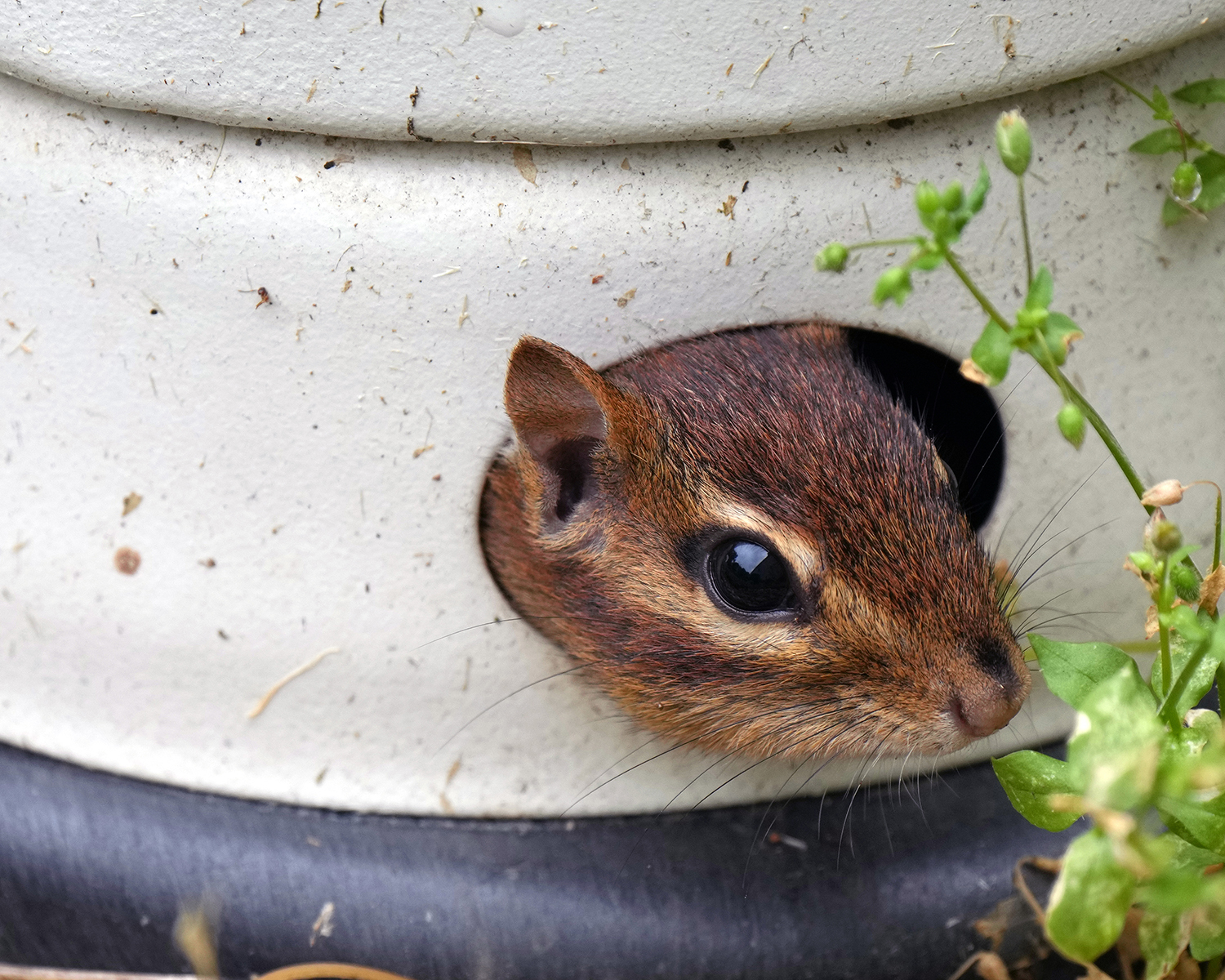 Indigo Bunting (Passerina cyanea) My neighbor (an avid birder) got word that Indigo buntings had been spotted along the Lake Hanover Nature Trail. So we took a road trip in search of the birds. Unfortunately, it was very overcast and threatening to rain at any moment. We walked for several miles without seeing a single bird of any kind. Just as we were about to give up, this little guy showed up and hung around for 20 minutes or more. 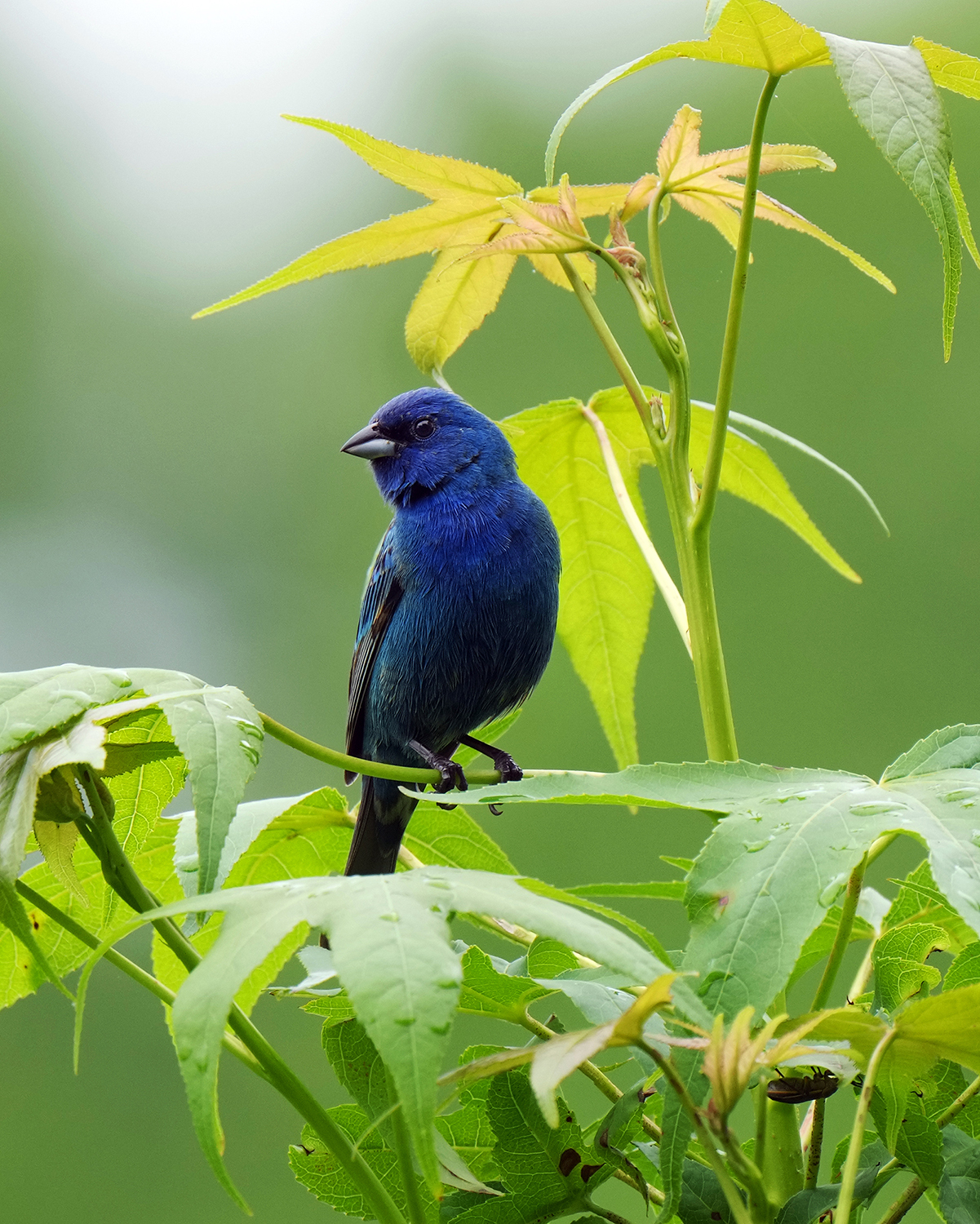