The Oxford English Dictionary gives this as the relevant definition of “psychopath”:

Well, you can see why that definition has been applied to cats as well, some of whom attack people for no reason and all of whom are “highly responsible.” That’s what led to the following article, which characterizes cats as psychopathic because they appear to show no emotions on their face, are largely indifferent to people, and appear indifferent when taken to new places.

In the 2019 article by Sarah Zhang in the Atlantic, however, she explains these traits. And really, a “normal” cat can’t be seen as chronically mentally ill; mental illness in humans is diagnosed by behaviors that deviate far from the mean, and can make their bearers unhappy. Cats are cats with a few true looney ones. 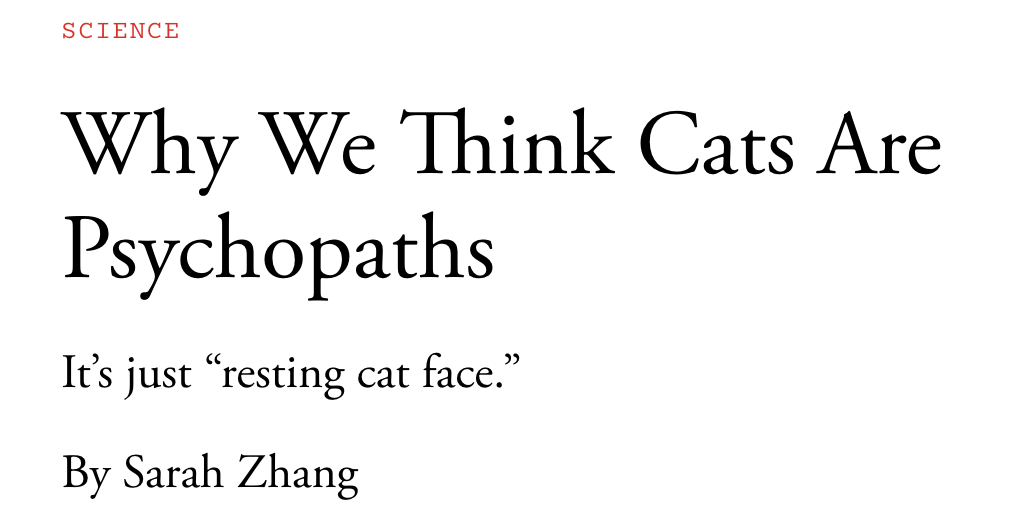 First, dogs and their behavior have been molded to human desire for over ten thousand years. One wonders why cat behavior hasn’t been similarly molded, and I’ve often mused on that without a good solution. At one time I thought that dogs have been trained to do work, and behavior and affinity has been selected for dogs doing jobs. But again, why can’t cats do jobs? I see no reason, for example, that we couldn’t change the size and shape of cats as much as we’ve changed the size and shape of dogs. Is the cat genome somehow more refractory to artificial selection than is the dog genome?

These answers get at the tricky semantics of calling a cat a “psychopath” when it is just … a cat. There’s always an implicit comparison when we talk about cats as aloof little jerks, says Mikel Maria Delgado, a postdoctoral researcher on cat behavior at the University of California at Davis. And that comparison is with dogs, which humans have spent thousands more years domesticating and molding in our image.

Remember, though, that cats have been domesticated for just about the same period as dogs.

What about the lack of facial expression in cats? Zhang says this. which may go back to the wild ancestors of both groups:

Cats, she pointed out, simply don’t have the facial muscles to make the variety of expressions a dog (or human) can. So when we look at a cat staring at us impassively, it looks like a psychopath who cannot feel or show emotion. But that’s just its face. Cats communicate not with facial expressions but through the positions of their ears and tails. Their emotional lives can seem inscrutable—and even nonexistent—until you spend a lot of time getting to know one.

Dogs, on the other hand, have learned to mimic humans. They do that thing where they pull their mouths back into something resembling a smile. They hang their heads in a way that looks super guilty. Just as humans have shaped the physical appearance of dogs, we’ve bred them to be extremely attuned to human social cues. Dogs that repeatedly raise their brows to make cute puppy faces are more likely to be adopted out of shelters.

Yet this cat, used to illustrate this article, does show a facial expression which looks like either excitement or curiosity: 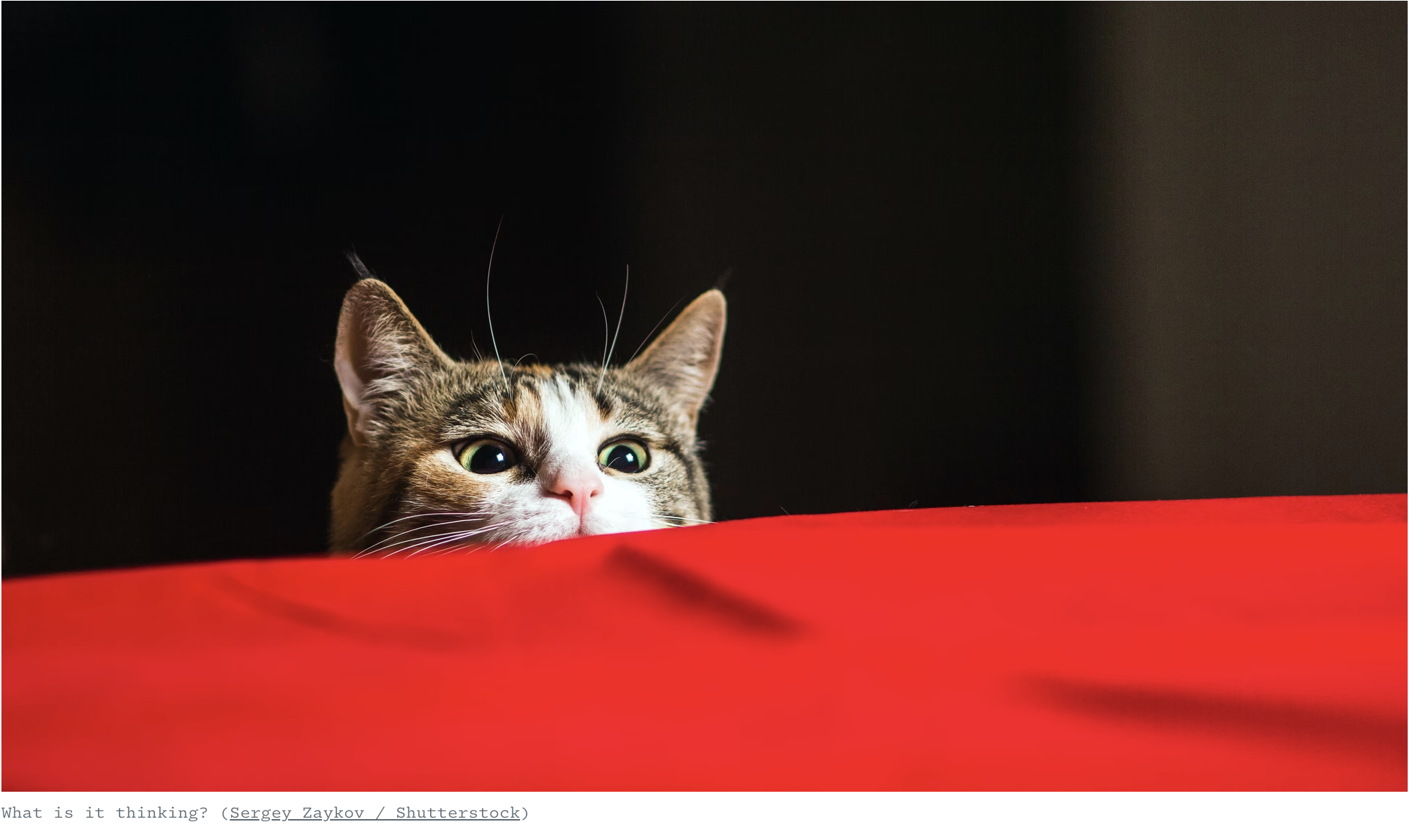 Finally, the difference in attachment:

A common charge against cats is that they do not care about their owners as anything more than a source of wet food. In studies of pet-owner relationships, scientists have found that dogs are more “attached” to owners. These studies frequently rely on protocol called the Ainsworth Strange Situation, in which the pet explores an unfamiliar environment alone, with its owner, or with a stranger. Dogs are more at ease with their owners rather than with strangers. Cats can’t seem to care less about the human there.

Maybe this says something about pet-owner attachment, but Delgado noted that dogs are used to their owners taking them to new places. Cats are territorial, and they might only leave the house to go to the vet, so what looks like indifference to their owners might just be overwhelming anxiety about a new, strange environment. Plus, the Ainsworth Strange Situation was developed by Mary Ainsworth to study parents and infants—another example of us judging cats on human rather than cat terms.

You can read about Ainsworth’s measurements here, but it was meant to apply to humans, and really, we don’t love cats because of their “psychopathic” traits/ In fact, in one case an owner loved a cat because it acted like more like a psychopath:

Talk to experienced cat owners, of course, and you’ll quickly find that psychopathy, or something that looks like it, is hardly a dealbreaker. When the subject came up in the office, my colleague Rachel Gutman launched into a tribute to her childhood cat K.C., who terrorized everyone but her immediate family members and, for some reason, Carmine the electrician. He’d bite anyone who dared to pet him. He’d attack her grandfather’s ankles. He’d pee in her grandmother’s bed when she came to visit. “In conclusion,” she said, “he was the best cat, and I miss him every day.”

This piece comes from Hakai Magazine, which describes how Icelandic towns are beginning to ban pet cats from roaming outside, as they kill birds and ferals can carry toxoplasmosis, which can infect humans. And you know that, once a cat has had a lot of time outside, it howls frantically to get out. How do Icelanders deal with this? Click to read:

In April, Akureyri—the largest municipality in the country’s north, with a population of 19,000 people and some 2,000 to 3,000 cats—decided to ban their feline residents from night roaming outside. Neighboring Húsavík banned cats several years ago from going outdoors day and night. Other Icelandic towns are considering bans as the issue of free-roaming cats increasingly makes its way from online forums to local politics, with the arguments generally falling into two categories. Some people—the “no animals in my backyard” or NAIMBY-ists—proclaim free-roaming cats are nuisances that should be confined like any other pet. Others think beyond the anthropocentric: cats kill birds and disrupt ecosystems.

. . . Introduce this elegant assassin to places where migratory birds have adapted to a land free of natural predators and the damage can be irreversible, with some alarming examples worldwide. The International Union for Conservation of Nature Invasive Species Specialist Group lists cats as one of the 100 worst invasive species in the world. Their paw prints are all over the scene. Numerous studies have implicated cats in the global extinction of at least 63 species—40 birds, 21 mammals, two reptiles—and contributed to the endangered status of another 587 species. And nowhere do cats, particularly unowned cats, cause more damage than on islands: free-roaming cat islanders are linked to at least 14 percent of global bird, mammal, and reptile extinctions. In Iceland, a country with only one native terrestrial predator, cats have contributed to the dramatic decline of seabirds and have preyed on off-shore bird colonies.

However, Icelanders love their kitties, too. In fact, Reykjavik banned d*gs in the city until 1984:

In a world where we divide ourselves into cat people or dog people, Iceland has traditionally been the land of cat people. The city of Reykjavík banned dogs for much of the last century, until 1984, based on the idea that they were farm animals. The city’s bourgeoisie cats nap on geothermal-heated sidewalks and befriend world-famous guests—in 2011, the New Yorker published Haruki Murakami’s short story “Town of Cats,” probably inspired by his visit to the Reykjavik International Literary Festival, where he noted the lively cat scene. But the felines’ chef-d’œuvre is inducing humans into an annual display honoring the power of cats: each December, the city plants a gigantic metal cat statue downtown at Lækjartorg square opposite the prime minister’s office to celebrate the folkloric Yule Cat, a monster-sized creature who—in the spirit of Christmas!—torments children and eats them alive, specifically those not wearing new clothes for the festivities. 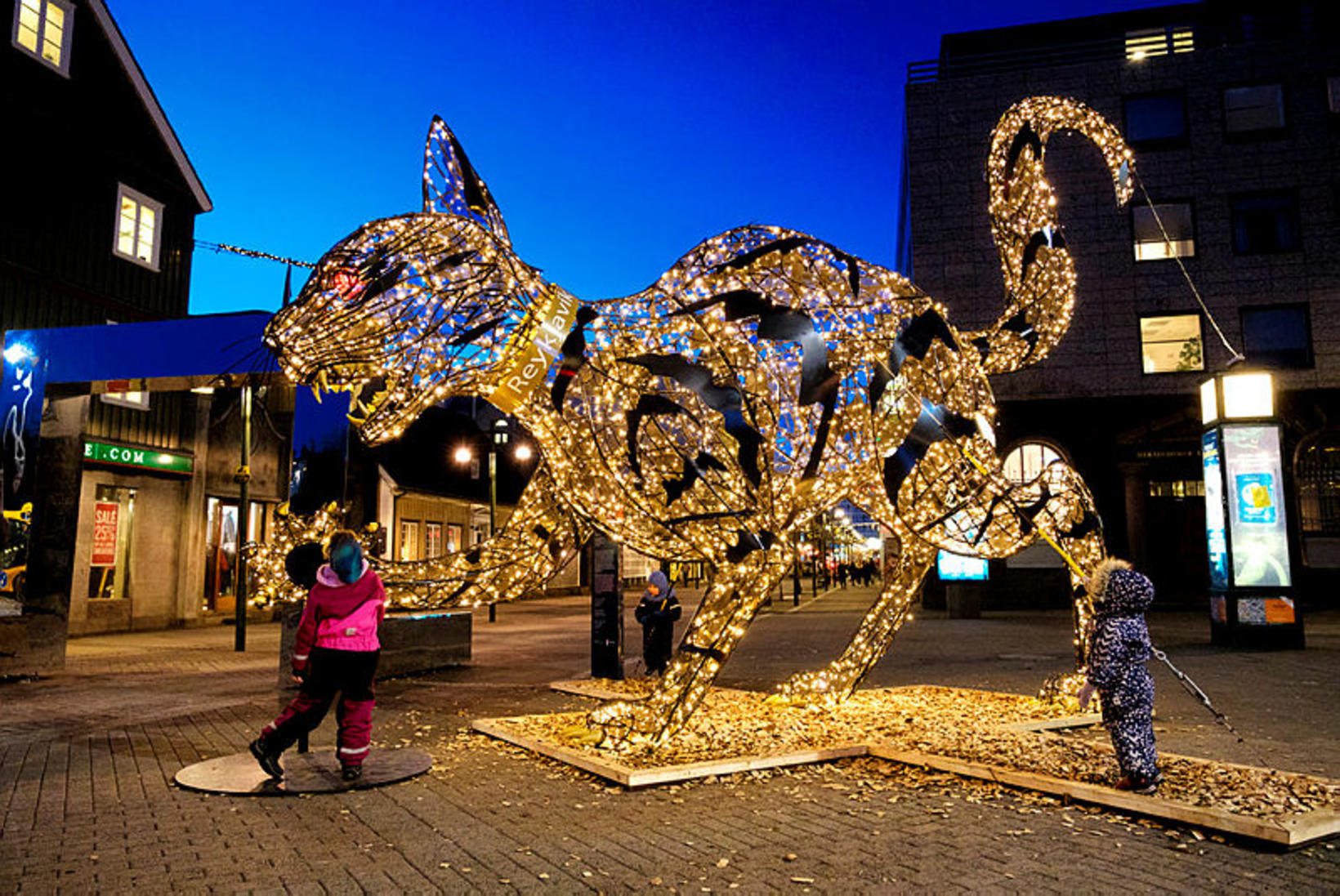 In Australia they shoot feral cats, but some places also impose curfews, and many places urge that cats be provided with “outdoor encloses” like the one below. Some Icelandic towns are compromising with curfews, but how do you call a cat inside in the evening? They’re psychopaths—they won’t come.

Somehow this “catio” doesn’t seem to be a good solution. The cat doesn’t look happy:

Last November, the town of Akureyri voted to ban outdoor cats entirely as of 2025. Outraged cat supporters all over the country threatened to boycott the town’s famous dairy products in protest. A local artist rallied support for the Cat Party ahead of local elections scheduled this past May. So, four weeks before election day, the ruling majority softened the total ban to a nighttime curfew, and the debate keeps going, defined by idiosyncratic fervor.

It’s a difficult problem, but the solution is to never let your cat outside (from its kittenhood) if you’re concerned with its hunting. Outdoor cats also have a shorter life than indoor cats for many reasons. This wasn’t a problem for me, as my late cat Teddy, who spent several years as an outdoor cat in Chicago, came in through a catflap installed by the previous owner and Teddy never wanted to go out again. He had had enough. And then I moved him to my crib, and he couldn’t get out. I have to say that he never seemed to be unhappy. 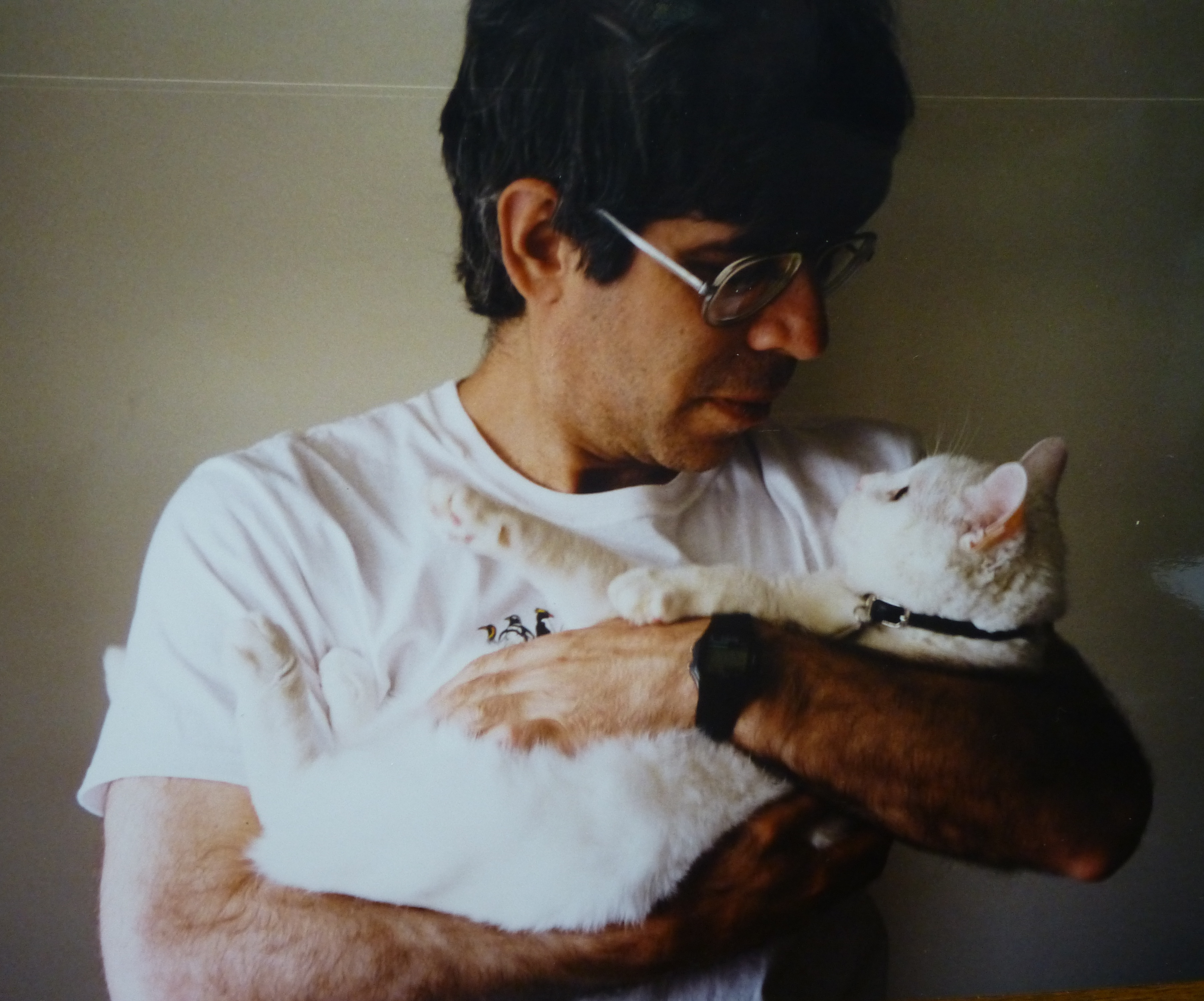 A bonanza of cat mummies has been discovered in Egypt: read this free article from LiveScience by clicking on the screenshot:

Archaeologists in Egypt have unearthed a trove of artifacts at the ancient necropolis of Saqqara, including 250 complete mummies in painted wooden sarcophagi and more than 100 bronze statues of ancient Egyptian gods.

The artifacts date to around 2,500 years ago, during Egypt’s Late Period, according to a statement(opens in new tab) from Egypt’s antiquities ministry.

The trove was found at Saqqara’s “Cemetery of Ancient Animals,” a temple complex outside Cairo once dubbed “Bubasteion” — a reference to the ancient Egyptian goddess Bast or Bastet, who was worshiped there in the form of a cat, CBS News reported. The complex was renamed in 2019, however, after archaeologists discovered other types of mummified animals and statues of different Egyptian gods there.

Here are some of the cat statues found (caption from article):

From other sites, here are photos of cat mummies in and out of their sarcophagi: 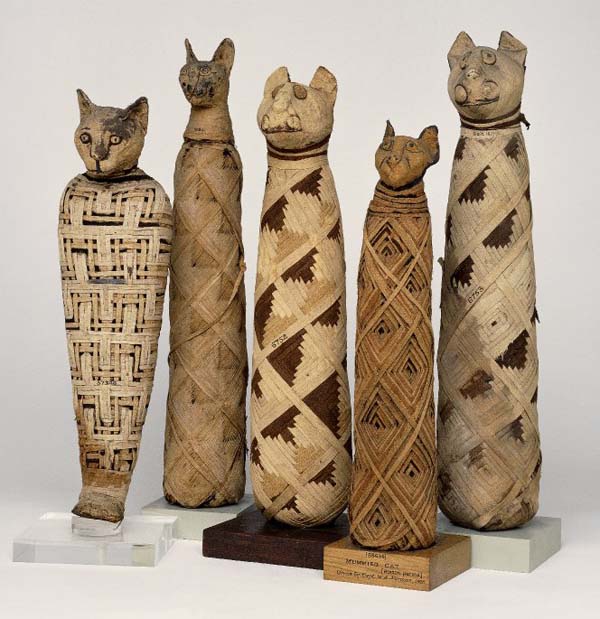 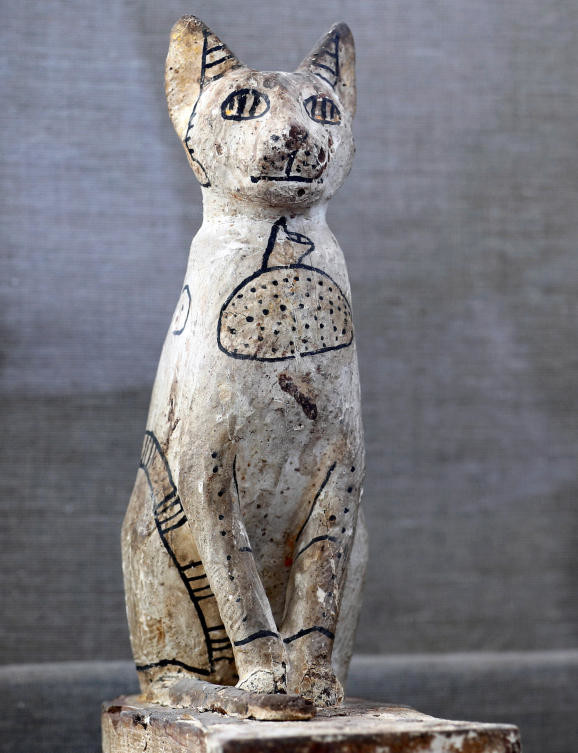 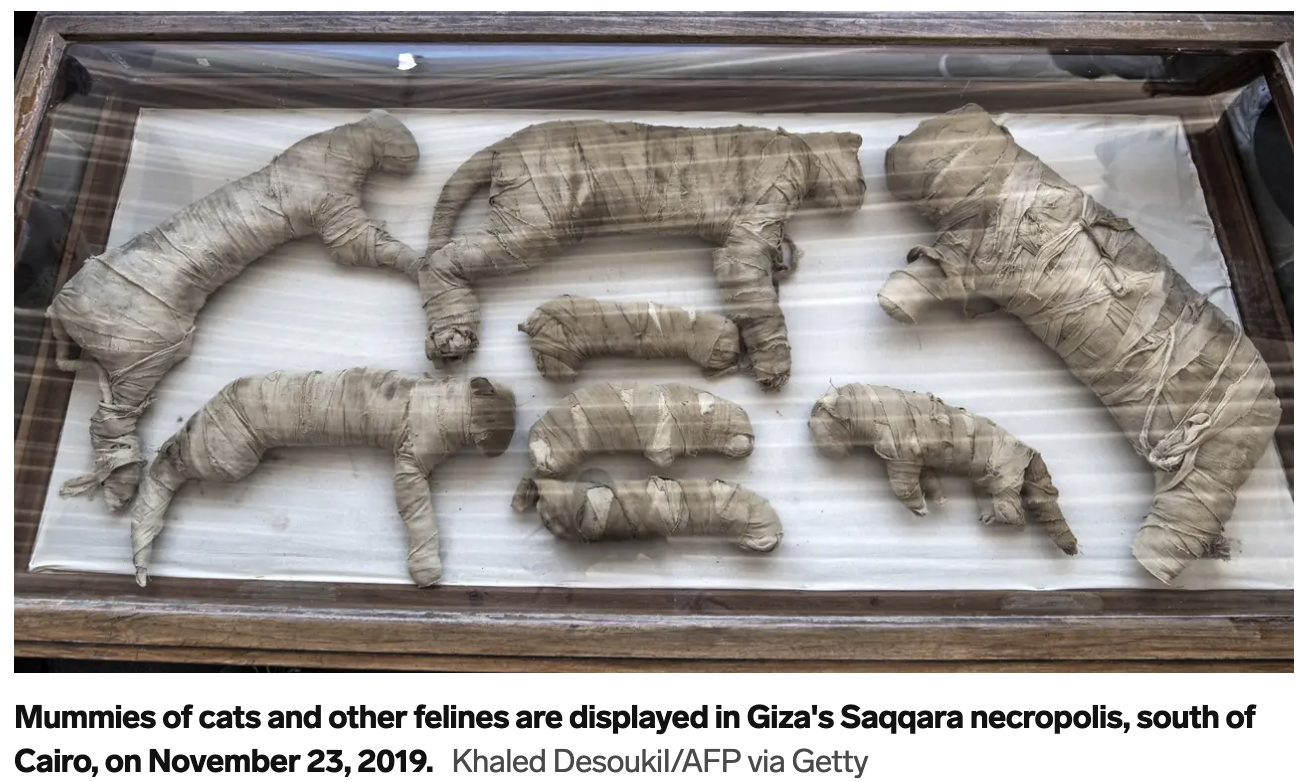 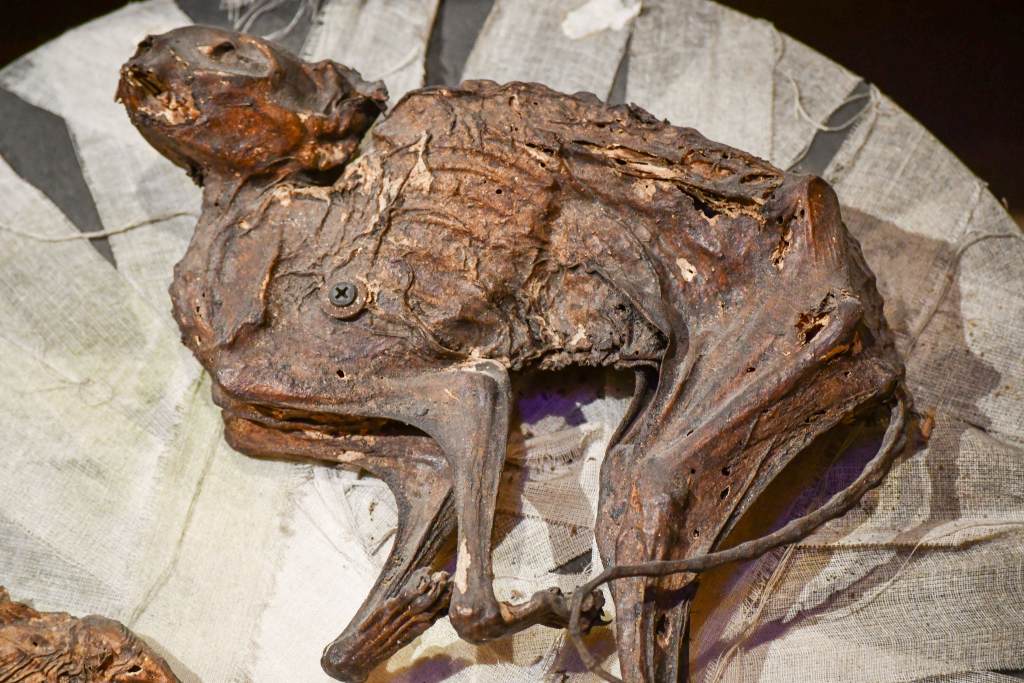 Of course they had to kill the cats to mummify them, and I don’t like that at all!

38 thoughts on “Caturday felid trifecta: Are cats psychopaths?; how Iceland monitors its moggies; hundreds of cat mummies unearthed in Egypt”