Actually, we have four items today, so I suppose that’s a “quadrafecta”; this post has been languishing for a long time. Click on the screenshots to read.

Unfortunately, there are no photos of cats in the list, but there are anecdotes.  Here are the ten people:

Where is Ernest Hemingway?  Anyway, I’ll give two descriptions of these ailurophiles and add a photo to each; you can see the other descriptions at the link above. It’s worth reading all of them, as these people really were nuts about moggies.

Mark Twain (1835-1910) may well out-crazy even the craziest of cat people. He had up to 19 cats at one time, all of whom he loved and respected far beyond whatever he may have felt about people. “If man could be crossed with the cat,” he said, “it would improve man, but it would deteriorate the cat.” When he was away from home, he would rent cats, paying their owners a large enough sum to see to their needs for a lifetime.

In keeping with the tradition established by Richelieu, Southey, and Gautier, Twain gave his cats most excellent names, among them Apollinaris, Beelzebub, Blatherskite, Buffalo Bill, Satan, Sin, Sour Mash, Tammany, Zoroaster, Soapy Sal, Pestilence, and Bambino. To be fair, the credit for the last of these goes to Twain’s daughter Clara, who took in Bambino during a sanatorium stay. She gave the kitten to her father after one of the other patients ratted her out.

When Bambino escaped one day, Twain was frantic. He put ads in New York newspapers describing the cat as “large and intensely black” and offering a $5 reward for his return. As Calvin Coolidge would find out 20 years later, a famous person asking for aid in the return of a lost cat was subject to an enormous quantity of doppelgangers and would-be changelings from people who just wanted to make contact with the celebrity. Even after Bambino turned up on his own a few days later and Twain sent notice to all the papers, people still turned up at his Fifth Avenue home with cats for him. 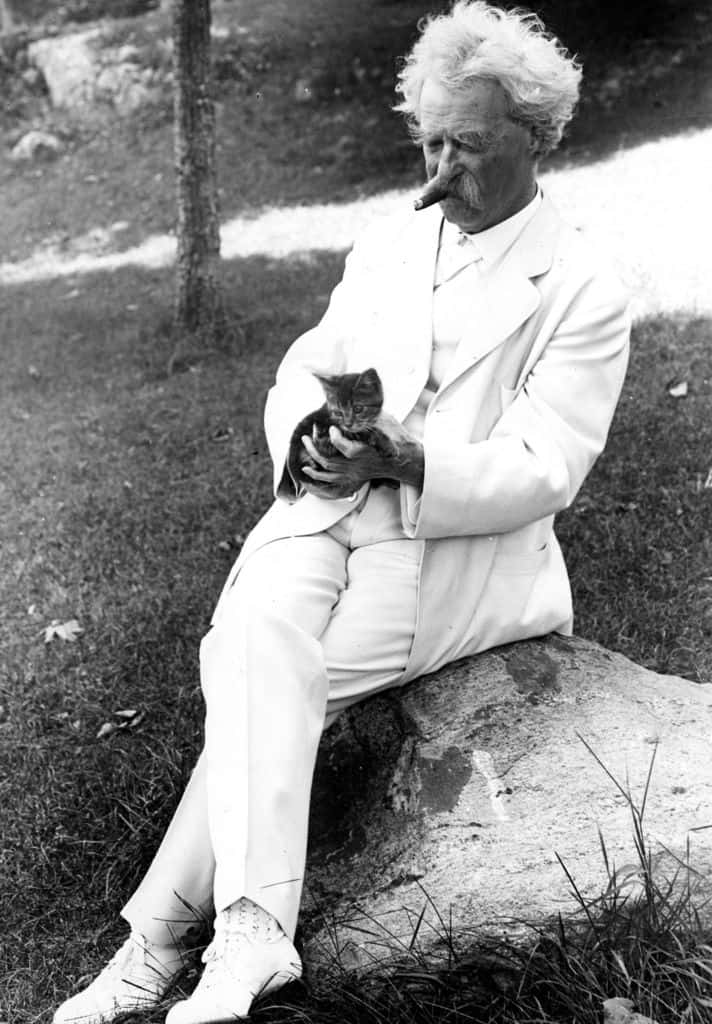 Calvin Coolidge (1872-1933), 30th President of the United States, had at least four cats in the White House—Tiger, Blackie, Timmy, and Smokey. Tiger was an orange tomcat Coolidge had moved into the White House from his farm in Vermont. He would come when the President called him by the nickname “Tige” and was often seen draped around his neck when Coolidge walked around the White House.

On the night of March 20, 1924, Tiger slipped out an open door and into the wilds of Washington, D.C. The next morning, Coolidge called for Tiger, but he didn’t appear. Alarmed, the President dispatched the staff to search the executive mansion and grounds, but to no avail. Next he enlisted the city police, who were put on alert to look for the orange-and-black cat. Again, no Tiger.

Desperate, Coolidge turned to a medium with a wider reach. He sent Secret Service agent James Haley to WCAP radio where, on the night of March 24, he broadcast an appeal to listeners, asking them to call the White House phone if they had any information about the president’s missing cat. Hundreds of people called the White House, either with tips or with offers to give Coolidge a whole new cat.

In the end, the radio appeal did the trick. One of the listeners was Captain Edward Bryant, who the next morning found a sleeping cat in the Navy Building just half a mile from the White House. Bryant tried the president’s usual greeting, “Here, Tige!” and the cat ran over to him. A short cab ride later, Tiger was back in President Coolidge’s everloving arms. To keep him that way, Coolidge got Tiger a new collar that declared, “My Name is Tiger. I live at 1600 Pennsylvania Avenue.” 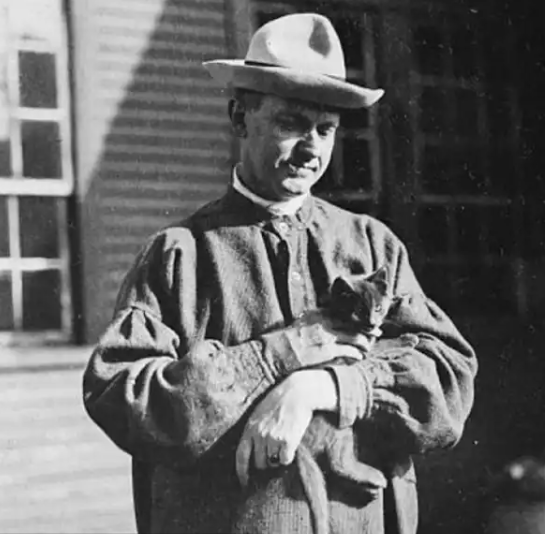 Why are cats are fussy eaters but d*gs are not? That’s the question taken up at Universal-Sci.com by a biologist at the University of Cambridge (click on screenshot below)

It comes down to this: scientists have discovered that cats not only can’t taste sweetness, as they have no sweet receptors, but they CAN taste bitter compounds, which are often associated with toxicity in plants. This is a bit of a surprise because cats are carnivores, and don’t often eat plants, though they’ll sometimes munch on grass (and often throw up afterwards!). And of course they’ll have a bit of catnip, but not because it tastes good. In the end, though, the author is forced to the speculation below, which really doesn’t answer the question posed in the title:

The discovery of feline bitter receptors might explain why cats have got a reputation as picky eaters. But their unfussy canine counterparts have a similar number of bitter taste receptors – so why are cats so finicky? One answer might lie in how the cat receptors detect bitter-tasting compounds. Research published earlier this year by another team of researchers showed that some of the cat taste receptors are especially sensitive to bitter compounds, and even more sensitive to denatonium than the same receptor in humans.

Perhaps cats are also more sensitive to bitter chemicals than dogs, or they may detect a greater number of bitter compounds in their everyday diet. Food that tastes bland to us or to a dog could be an unpleasant gastronomic experience for cats. So rather than branding cats as picky, perhaps we should think of them as discerning feline foodies.

But then WHY would cats be more sensitive to bitter chemicals than dogs, especially because if bitterness is a sign of toxicity, d*gs should also be picky about foods. The implication is that dogs can’t detect bitter compounds as easily as cats. But there’s no Independent evidence for that. In the end, all we can say is that this is Ceiling Cat’s will.

Here’s a piece by Megan Reynolds from the December 7 New York Times.

Reynolds had an overweight tuxedo cat named Daisy, which, though confined to an apartment, took great delight at watching the birds outside. But then Daisy and Reynolds moved to another apartment in NYC that didn’t have a view of birds. Daisy was depressed and filled with ennui. The solution: bird television!

Search “TV for cats” and you’ll find hundreds of hourslong videos, shot in beautiful HD, of birds and other fauna at a feeder, or in the grass, darting in and out of frame for eight to 10 hours at a time. When I pressed play on the first video that I found (“My Garden Birds — Relaxing Nature Music for Cats to Sleep”), I wasn’t expecting much, perhaps a bird or two pecking at a pile of seeds followed by four hours of nothing. But the action on-screen immediately caught Daisy’s attention, as she parked herself on the floor in front of the TV, mouth agape, like a child inhaling episodes of “Paw Patrol.”

When a starling swooped in to investigate some seeds on a log, Daisy swatted at the TV, growling in frustration. With each new bird that arrived on-screen, she changed her approach, splaying herself flat on the floor and then pouncing in vain. After five minutes, she recognized this grift for what it was and returned to the chair where she spends most of her time. Nonetheless, I left YouTube on autoplay and would occasionally park myself on the sofa to watch.

Although Daisy doesn’t have the ornithological life she used to, cat t.v. is still better than nothing:

It was clear that she knew these birds were two-dimensional, but when they showed up seemingly unbidden, she was always energized, even if briefly. Petting her solemnly one day in an attempt to penetrate her mind, it occurred to me that the TV birds were interesting simply because they were not me.. . .

Watching Daisy watch YouTube was a reminder of who she has the potential to be. And as I watched, too, I let the calm nature sounds soothe me out of my human brain, with its anxieties about professional inertia and what I was going to cook for dinner that night. The birds transported me into a world in which I was closer to some essential version of myself, serene with a sense of perspective and surrounded by beauty. In short: The birds brought out the best in both of us.

When I wake up now, Daisy waits in front of the TV, staring at the screen, patient and unmoving. I make some coffee, prepare my breakfast and sit on the couch, flicking through the videos until I find one that meets my requirements (flowers and green trees are my preferred settings). It’s a ritual that satisfies the part of me that needs quiet — and the part of Daisy that doesn’t.

From a 2016 post in Smithsonian Magazine, we learn about the huge and dreaded Jólakötturinn, the Yule Cat of Iceland, described this way by Wikipedia:

The Yule Cat, known as Jólakötturinn, a huge and vicious cat who is described as lurking about the snowy countryside during Christmas time and eating people who have not received any new clothes to wear before Christmas Eve. He is the house pet of Grýla and her sons.

Though referred to as an ancient tradition, written accounts of the Yule Cat have only been located as recently as the 19th century. The threat of being eaten by the Yule Cat was used by farmers as an incentive for their workers to finish processing the autumn wool before Christmas. The ones who took part in the work would be rewarded with new clothes, but those who did not would get nothing and thus be preyed upon by the monstrous cat. The cat has alternatively been described as merely eating away the food of ones without new clothes during Christmas feasts. The perception of the Yule Cat as a man-eating beast was partly popularized by poems of Jóhannes úr Kötlum as with the rest of the folklore.

Here’s an article from Laughing Squid, with an explanatory video. (Click on screenshot to read):

In a holiday-themed episode of the PBS series Monstrum, host Dr. Emily Zarka discusses the Icelandic legend of Jólakötturinn, aka “Yule Cat”. This monstrous feline stalks the entire country looking for those who aren’t wearing new clothes on Christmas Eve. Upon finding such a poor soul, the Yule Cat spares no mercy and eats the human before resuming the hunt for others.

Christmas isn’t just a time for presents, cookies, and holiday cheer, but the hunting period of Iceland’s murderous monster feline, the Yule Cat. This giant, fluffy cat towers over buildings, roaming the snowy countryside for human victims who have yet to receive new clothes before Christmas.

As Zarka explains, this local legend comes from folklore, the familiar presence of large, furry cats in Icelandic homes, the need for warm clothes and the crucial boost that clothing production gave to the economy.

And from the Wikipedia link, here are the 13 “Christmas Trolls”, who come, one per day, from December 12 to December 25. Each one leaves 12 days after it arrives. These are hilarious!

Lagniappe: Amazon is starting to print useful information on its boxes: 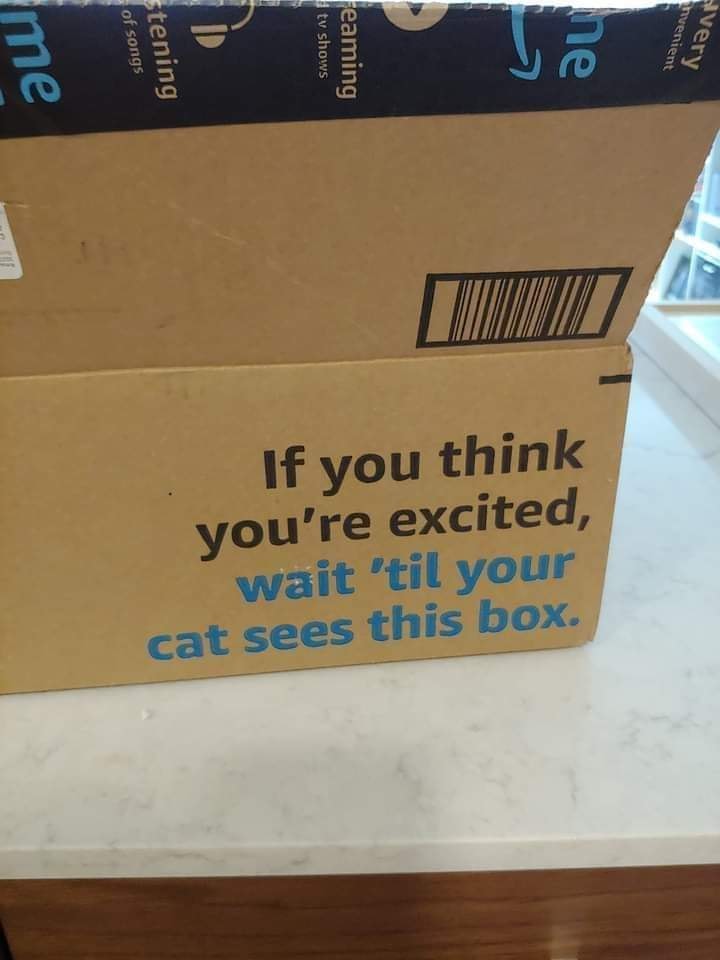 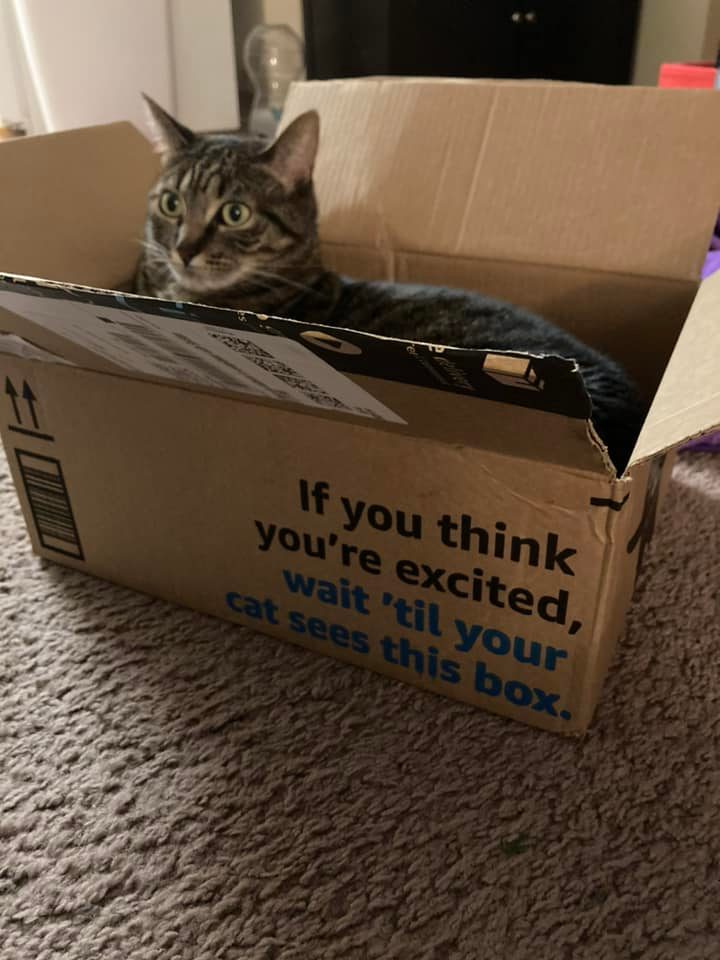 20 thoughts on “Caturday felid trifecta: Iceland’s Yule cat; Famous ailurophiles; why cats are fussy eaters; woman yearns to give her cat the perfect life; and lagniappe.”