Now my own personal observation of mallard ducklings following their mothers in Botany Pond shows that when she’s swimming slowly, a pack of them will clump behind her, as in the photo below (mine): 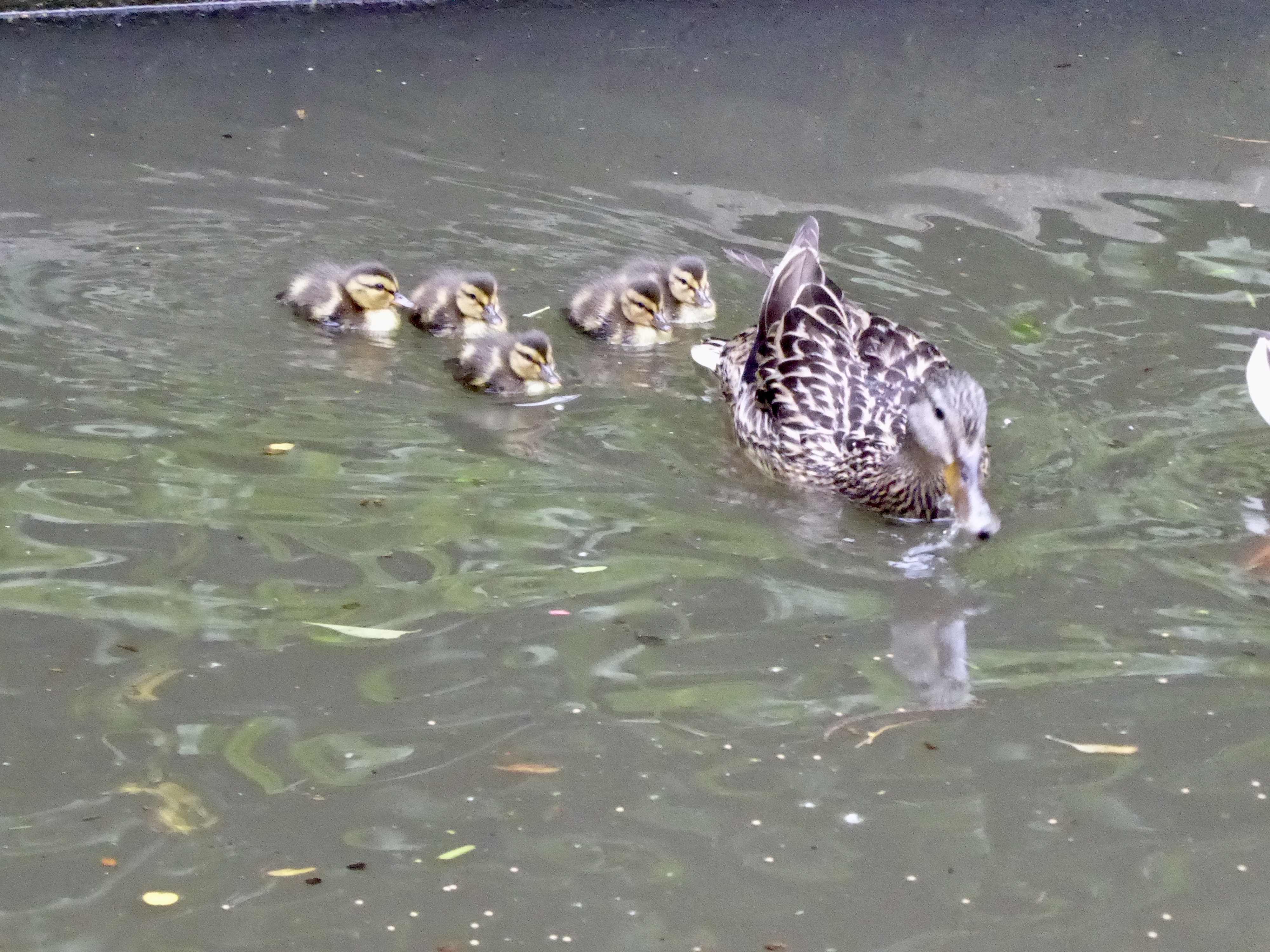 But when she’s booking it away from other ducks, the babies form a line behind her, like this (not mine): 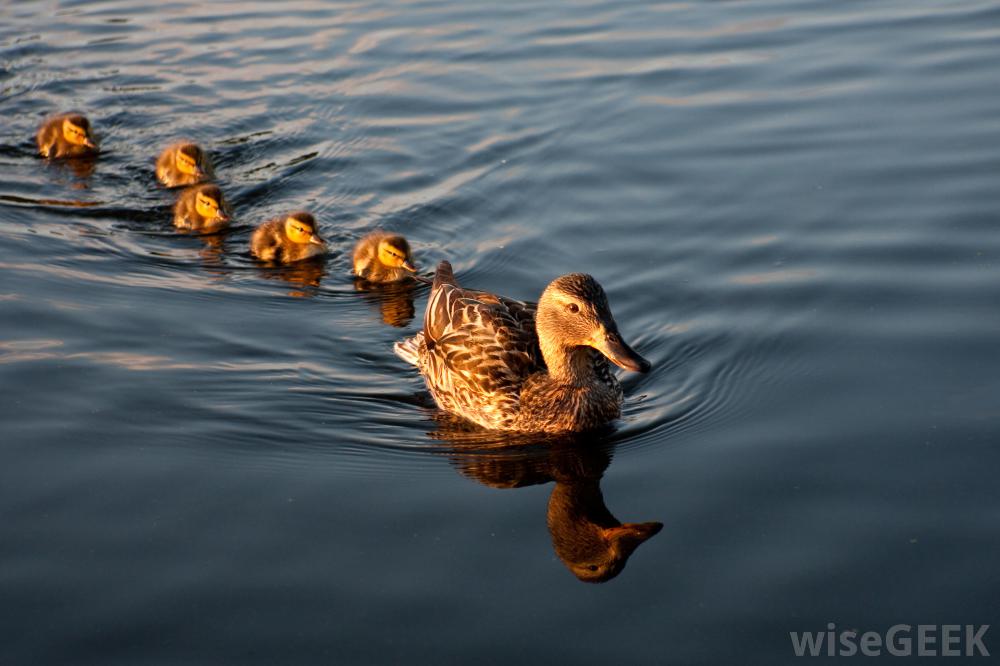 Some other waterfowl show the same behavior when swimming in open water. Here are a pair of geese and their goslings (one adult brings up the rear as a guard):

Have you ever asked yourself why? Wouldn’t a clump be better? Well, five researchers from China and Scotland asked themselves what advantage could possibly accrue to swimming in a line?

And they found one: it involves riding the waves of the duck ahead of you, and it benefits every duckling in the line. The phenomena involved are called “wave riding” and “wave passing,” and are explained briefly (and not very satisfactorily) in the short popular piece directly below at Phys.Org, which appears to be a press release from Glasgow’s University of Strathclyde.

Click on the screenshot if you want a quick explanation, but if you want to go into more depth, involving math and fluid mechanics, read the original paper two screenshots down. It’s from The Journal of Fluid Mechanics. 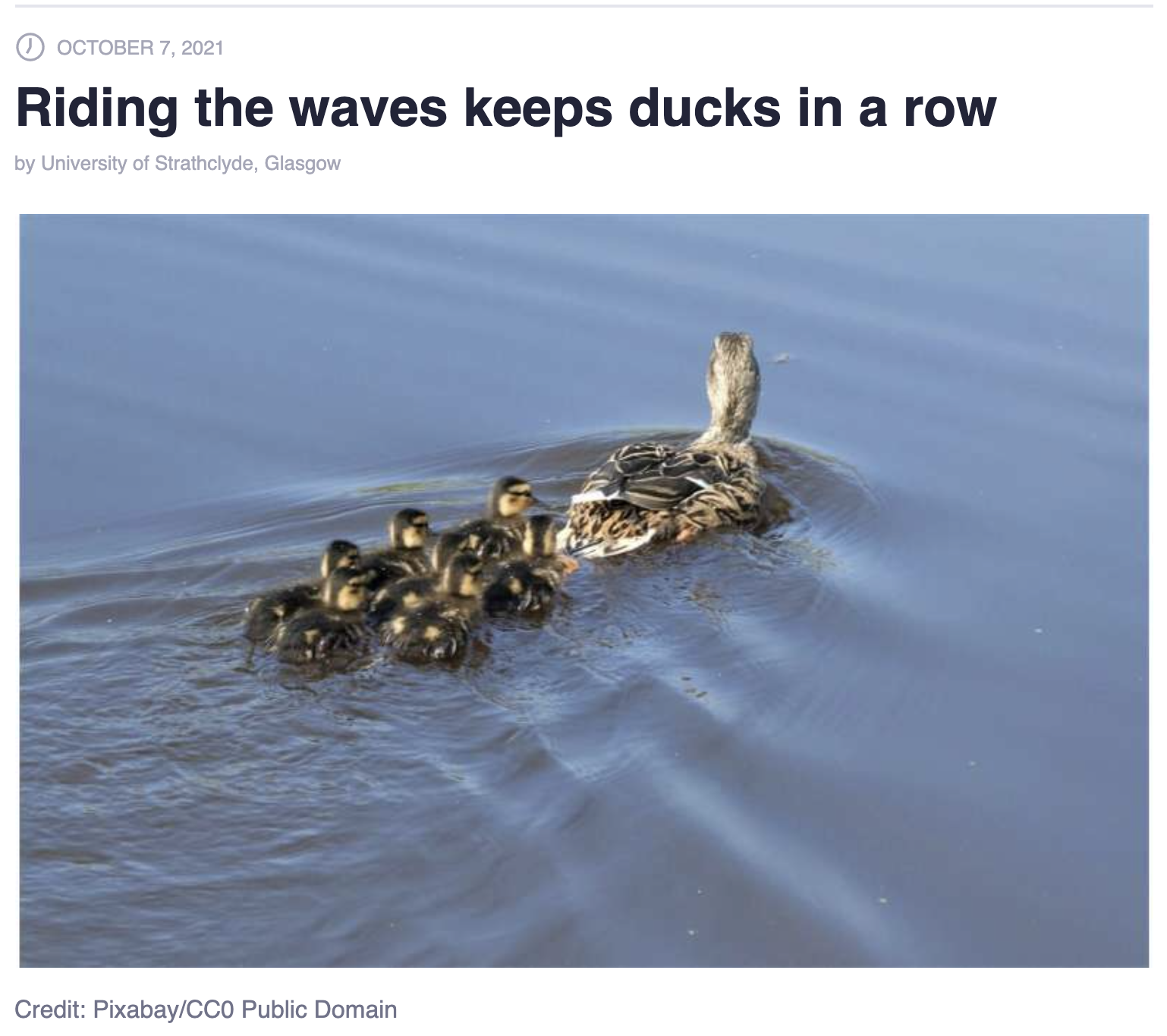 Here’s the original paper (click on screenshot); the entire reference is at the bottom and you can get a pdf from a link on the title page:

The explanation is simple but based on complicated modeling rather than observatin. And although at the end the authors claim that they now understand why ducklings swim in a line, they really don’t. They have proposed a model that, in my estimation, is a good explanation, but one that needs empirical testing. You have to look at the ducks!

Here’s how it works, in a model in which they’ve made some assumptions and used fluid-mechanic equations of drag in the water.

See the diagram below, with the arrows showing the hydrostatic force.

(b) When a duckling is swimming in calm water, its movement is impeded by the water drag alone, and there is “hydrostatic pressure force” that is exerted upward on the duckling’s belly.

(c) When a duckling is swimming on a wave with its breast on the wave’s crest and its belly in a trough, the hydrostatic force (arrows) works against the duckling’s movement, making it exert more energy than if it were swimming in calm water.

(d) However, when a duckling is swimming with its breast in the wave’s trough and belly on the crest, it is propelled forward by the wave, exerting less energy to swim than it would in calm water. It’s like surfing.

And this is the explanation for why the first duckling “drafts” behind the mom, for mom’s swimming creates a series of waves behind her. You must assume that the duckling is the right distance behind her and riding the waves in position (d) above (assumptions not tested in the paper). As the authors note, it requires that the duckling’s forward speed must be equal to the mom’s (the velocity of the wave). This is called “wave riding”. But of course the duckling’s speed must equal Mom’s speed if it’s not to fall behind or go ahead.

The mother duck benefits too: she can get a reduction in wave drag of up to 35% by being pushed by the bow wave from the first duckling behind her. It’s a win-win situation.

What about the other ducklings in line?  Well, in the “wave passing” phenomenon, the other ducklings get a similar boost in movement so long as they’re the right distance behind the one ahead and so have their breast in the wave trough. All that’s required is that they keep the right distance from each other and move at the same speed as the mother. (They do of course move at that speed: that’s what keeps the line.) The first three ducklings get special benefits, but after that each succeeding duckling gets a smaller but still appreciable (and equal) boost, shown in the figure below (CDR represents the “reduction in drag” coefficient). Don’t ask me why it’s the first three who benefit most; it’s above my pay grade. ‘

Here’s a figure of a mom and six ducklings, showing the reduction in drag of each duckling on the y axis (height of blue dots). Duckling #1 gets the most benefits, then #2 and #3, and then the rest get equal benefits of wave-riding via wave-passing. The red lines show the wave profile.

There would of course be an evolutionary advantage to babies swimming this way. And of course they don’t do the calculations, but those ducklings swimming the right distance behind the one before (a phenomenon that must itself evolve), have an energy advantage compared to off-wave ducklings, and that means better survival and reproduction. The authors add that “These principles could be potentially applied to design modern freight carrying vessels, e.g. a water-train to transport more cargoes without extra fuel cost.”

So that’s the story. And yes, it is a story, but a good one.  How do we test it? It’s not that difficult: you simply measure where the ducks are swimming behind the mother, seeing if they are indeed riding her wave. It’s harder than it looks, but surely not beyond doing! (I should add that a single duckling swimming in front of the mother gets a bow-wave push, but that doesn’t work for multiple ducklings, and there’s a protection and navigation advantage of swimming behind and not in front of Mom.)

It should be tested, for it’s a simply explanation for an observation that many have made, but none have queried.

Here’s one caveat I thought of. We know that ducklings sometimes follow in a line behind Mom when they’re walking on land. Here’s a photo: 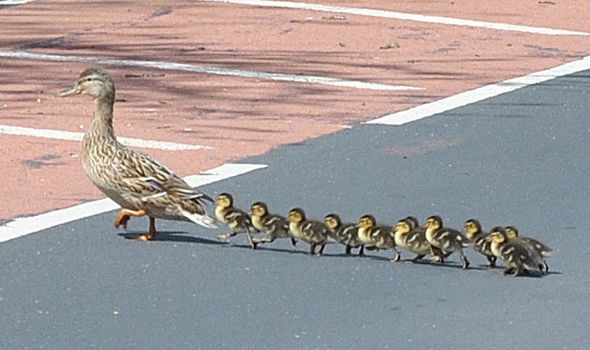 There are two questions: does this reflect an advantage different from that of wave-riding and wave-passing? Why aren’t they walking in a clump? And if there’s an advantage of terrestrial locomotion in this way, perhaps the explanation above is wrong or insufficient. On the other hand, my own guess would be that mallards are only infrequently on land with their babies compared to being in the water with them. I suggest, then, that single-file following evolved for water locomotion and is automatically followed as a instinctive byproduct when they’re moving on land. Who knows?

This is exemplified in the famous “Make Way for Ducklings” statue on the Boston Common, honoring the famous children’s book: 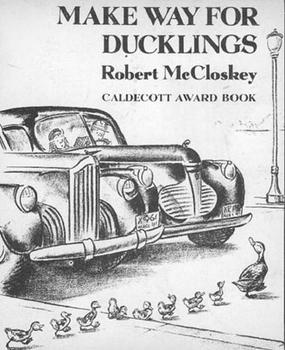 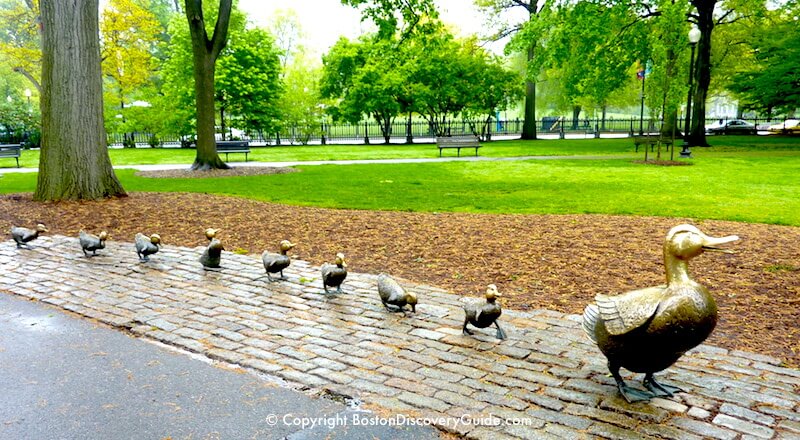 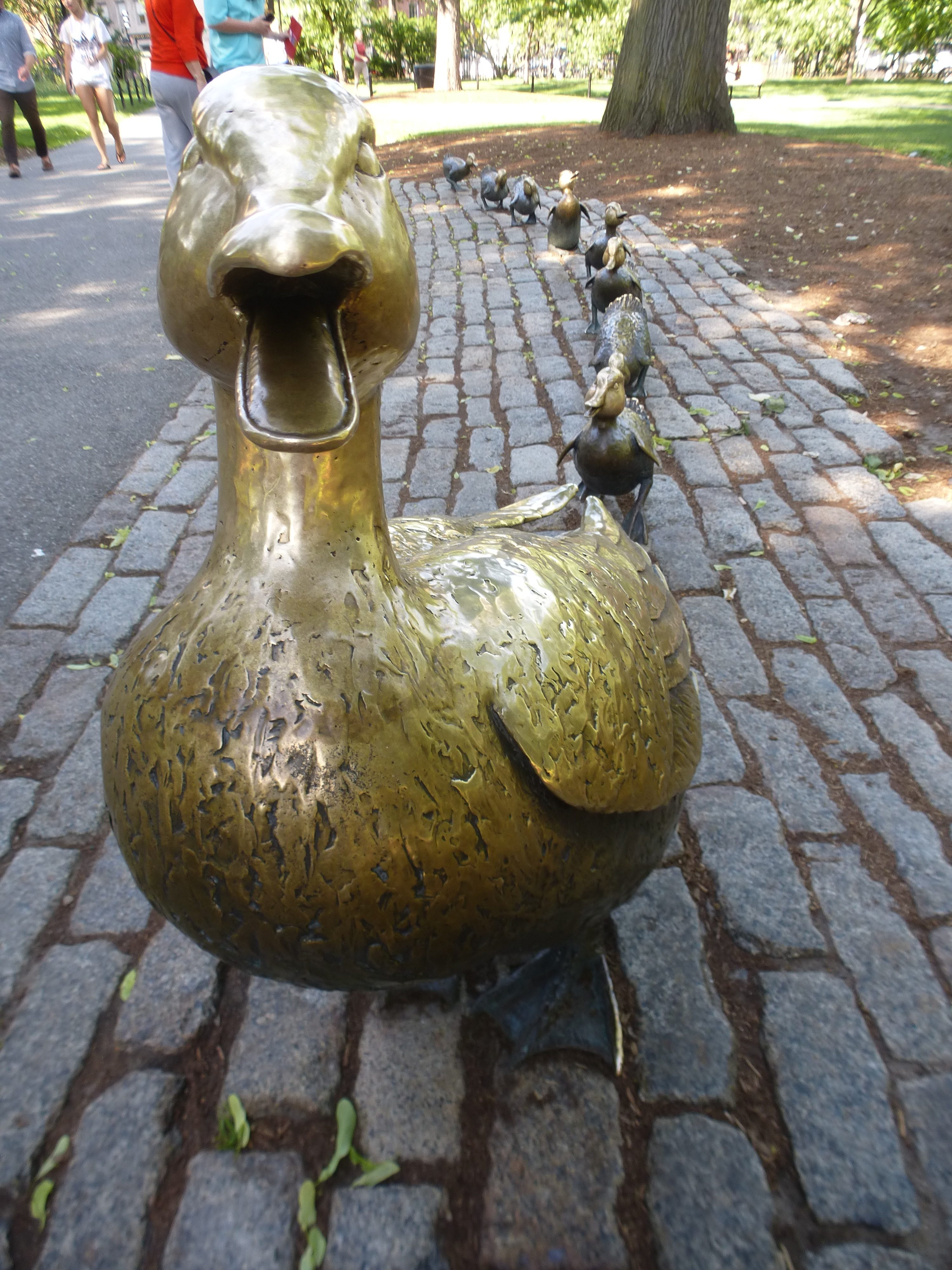