If you’re following transgender issues, and aren’t afraid to question the view that transwomen are women in every sense and likewise for transmen, and also feel that there’s a rush to affirm transgender identity in children or teens without proper guidance, then you should read these two articles.

I was originally going to present just one long quote from Andrew Sullivan’s take on the issue, as his analysis this week is good, but he also relies on a new article by Abigail Shrier published on Bari Weiss’s site. You should read that one first by clicking on the screenshot below.  And do remember to subscribe to the Substack sites that you read often. 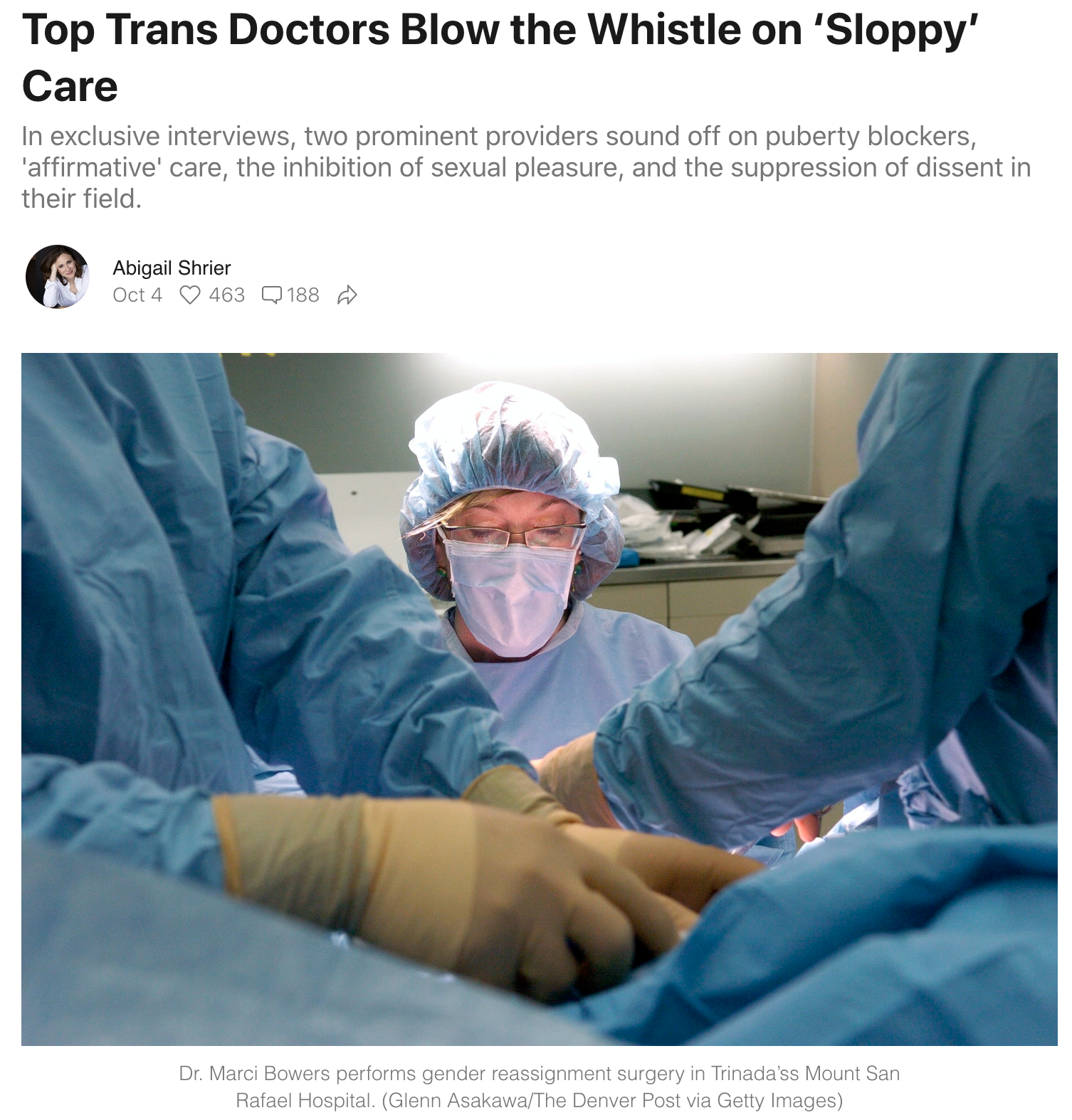 Shrier is the demonized author of the book Irreversible Damage, which warns of the dangers of premature transitioning as an early teen or child without proper medical and psychological guidance. She is not a transphobe, nor is she opposed to gender changing. She is just worried about the dangers of rapid “affirmation” without caveats as well as the possibility that social pressure forces young people to transition instead of, for instance, becoming gay or changing their minds. The medical consequences of transitioning are irreversible, and you have to have all possible information before you start —usually by taking “puberty blockers.”

Shrier is not a transphobe, though the trans activists call her one. I suggest you read her book and decide for yourself.

Her new piece, which I won’t dwell on, as you should read it, is about two doctors who help young people (mostly girls) transition. Both doctors are trans women. One, Marci Bowers, is a world expert in vaginoplasty: creating an artificial vagina from a penis. Such surgery is often, but not always, chosen by biological males transitioning to the female gender. The other, Erica Anderson, is a clinical psychologist at UCSF’s Child and Adolescent Gender clinic.

Neither of these women are transphobes, of course, but both express caution about changing gender from male to female without proper advice. The main issue is loss of one’s sexual side. Transitioning starts with taking puberty blockers, which stops puberty in its tracks and according to trans activists is allegedly completely reversible (we don’t really know that!), so that a candidate can ponder their decision while in sexual stasis.

The problem with the drugs is that most people taking the blockers go on to full transitioning, often involving later genital surgery. And this causes two problems. First, puberty blockers prevent not only development of full erotic sensation, but also leave the penis at such a small size that it’s very hard to convert it into a vagina facsimile. The alternatives, using tissue from elsewhere like the colon, are very unsatisfactory. Second, this surgery pretty much prevents transsexual women from ever having an orgasm. So unless they’ve experienced one before beginning puberty blockers, they’ll never have the full experience of sex with a partner. This isn’t often emphasized, leading to Anderson’s quote:

Anderson agreed that we’re likely to see more regret among this teenage-girl population. “It is my considered opinion that due to some of the — let’s see, how to say it? what word to choose? — due to some of the, I’ll call it just ‘sloppy,’ sloppy healthcare work, that we’re going to have more young adults who will regret having gone through this process. And that is going to earn me a lot of criticism from some colleagues, but given what I see — and I’m sorry, but it’s my actual experience as a psychologist treating gender variant youth — I’m worried that decisions will be made that will later be regretted by those making them.”

What, exactly, was sloppy about the healthcare work? “Rushing people through the medicalization, as you and others have cautioned, and failure — abject failure — to evaluate the mental health of someone historically in current time, and to prepare them for making such a life-changing decision,” Anderson said.

Andrew Sullivan’s own Substack column this week is largely about transsexuality, and mostly about comedian Dave Chappelle’s new (and last) Netflix show, which I haven’t seen, called “The Closer”. Click on the screenshot to read (and subscribe if you’re so moved): 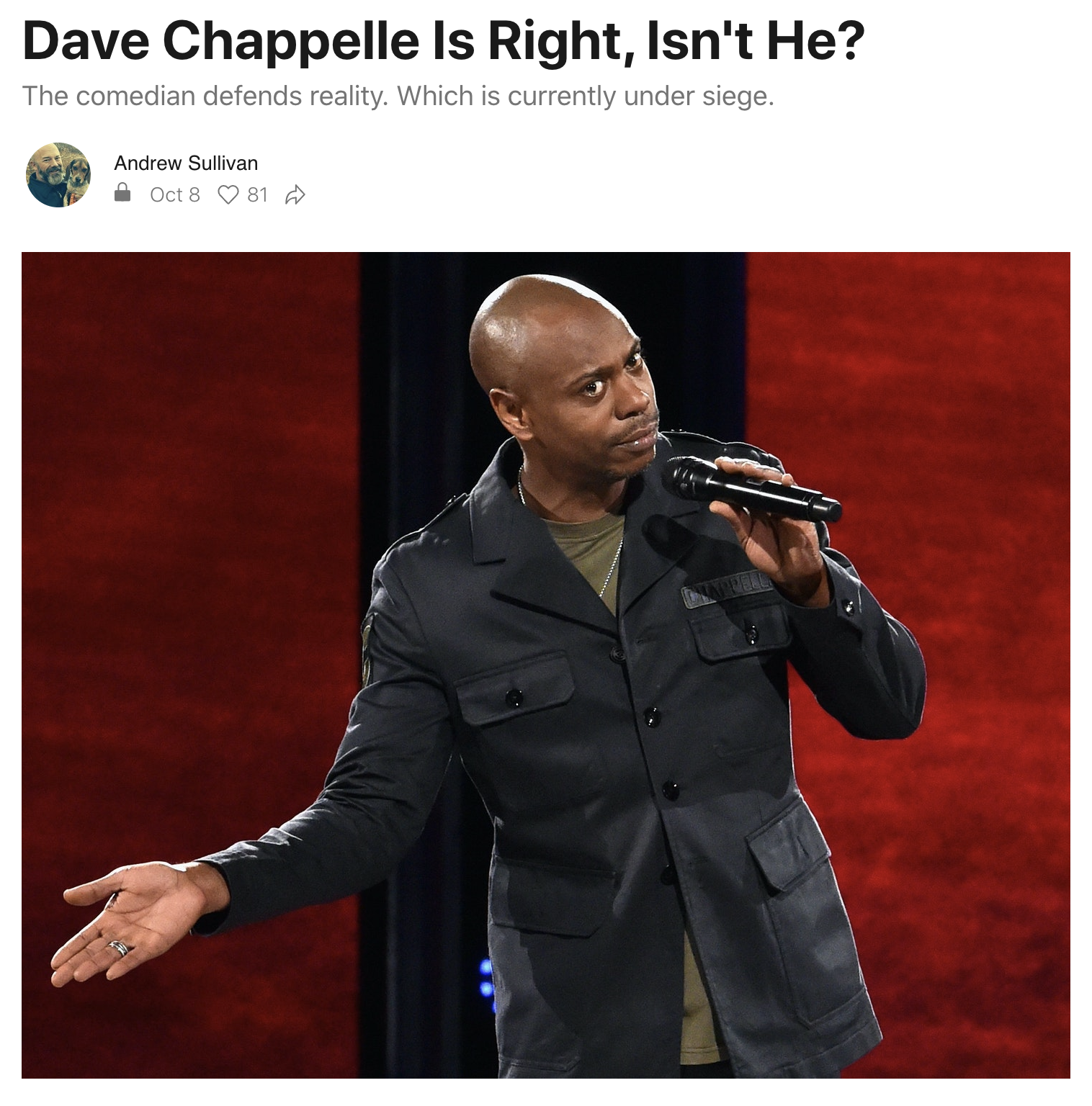 Sullivn calls Chappelle “the greatest living comedian”, and after having seen a couple of his pieces, I think he’s right up there. He also pulls no punches, saying, like Lenny Bruce and other controversial comics, exactly what he thinks, not worrying about saying what he sees as true will damn him forever. The “truth” in this case, comprises Chappelle’s views on transsexuality, drawn in particular from his friendship with a trans woman comedian, Daphne Dornan. (She killed herself not long ago.) Dornan turned her transsexuality into humor, sometimes laughing at herself, and Sullivan calls Chappelle’s remembrance of her “a moving account.”

But of course Chappelle being Chappelle, he makes shocking statement like one I’ll quote below—things that have gotten him called a transphobe (Sullivan gives links to several hostile reviews). Yet to me, Chapelle’s message, at least as filtered through Sullivan, is redolent of truth.  I just don’t have the guts to say it like he does. And so I’ll give a long quote from Andrew (emphasis is mine):

And, through the jokes, that’s what Chappelle is celebrating: the individual human, never defined entirely by any single “identity,” or any “intersectional” variant thereof. An individual with enough agency to be able to laugh at herself, at others, at the world, an individual acutely aware of the tension between body and soul, feelings and facts, in a trans life, as well as other kinds of life. Assuming that marginalized people cannot tolerate humor at their own expense is as dehumanizing as assuming they have no agency in their lives. It is a form of bigotry — of the left.

And the capacity for laughter — the target of every fundamentalism, left and right — is integral to being fully human. To remind us that a trans person can laugh at herself is to remind us that she too is brimming with the kind of complex self-awareness that every mature human has. We laugh, above all, at the absurdity of our reality. And yes, that’s the second point Chappelle makes: there is something called reality. We can deny it; or we can accept it. Comedy’s key role is that it helps us accept it.

Whatever else this is, it seems to me to be the opposite of transphobia. Like Rowling, Chappelle supports every law protecting trans people from discrimination; and believes in the dignity and equality of trans people, as he insisted in the show. But he also believes that it is absurd — absurd — to say that a trans woman is in every way indistinguishable from a woman. Because she isn’t.

The current debate, in other words, is not about being pro or anti-trans, in the lazy formula of woke media. In the US, trans people are already protected under the Civil Rights Act of 1964, thanks to Justice Neil Gorsuch. And I literally know of no one who insists on the reality of biological sex who would disapprove of or reverse this.

The debate, rather, is about whether a tiny group of fanatics, empowered by every major cultural institution, can compel or emotionally blackmail other people into saying things that are not true. This, in Chappelle’s words, is what they are trying to force people to deny:

Gender is a fact. Every human being in this room, every human being on Earth, had to pass through the legs of a woman to be on Earth. That is a fact. Now, I am not saying that to say trans women aren’t women, I am just saying that those pussies that they got … you know what I mean? I’m not saying it’s not pussy, but it’s Beyond Pussy or Impossible Pussy. It tastes like pussy, but that’s not quite what it is, is it? That’s not blood, that’s beet juice.

Yes this is shocking, funny, wild. But not wrong. And this seems to me to be exactly what a comic is supposed to do: point out that the current emperor has no clothes. A transwoman cannot give birth as a woman gives birth. She does not ovulate. Her vagina, if it exists, is a simulacrum of one, created by a multiple array of surgeries. Sex in humans is binary, with those few exceptions at the margins — mixtures of the two — proving rather than disproving the rule. Until five minutes ago, this was too obvious to be stated. Now, this objective fact is actually deemed a form of “hate.” Hate.

This means that the debate is no longer about 0.2 percent of humanity. It’s about imposing an anti-scientific falsehood on 99.8 percent of humanity. It means that we have to strip all women of their unique biological experience, to deny any physical differences between men and women in sports, to tell all boys and girls that they can choose their sex, to erase any places reserved exclusively for biological women, like shelters for those who have been abused by men, and to come up with terms like “pregnant people” to describe mothers. Yes — mothers. The misogyny buried in this is gob-smacking. Is Mothers’ Day next for the trans chopping block?

And the key thing is: absolutely none of this is needed to protect trans people from any and all discrimination.

The question of trans rights has been settled by the Supreme Court. I’m delighted it has. What we’re dealing with now is something very different. It’s an assault on science; it’s an assault on reality; it’s an attempt not to defend trans people but to cynically use them as pawns in a broader effort to dismantle the concept of binary sex altogether, to remove any distinctions between men and women, so that a gender-free utopia/dystopia can be forced into being.

There’s a lot more to the piece, including Sullivan’s contention that the woke Left uses gays in a way that ensures their “continued marginalization”, and most important, his contention below (my emphasis):

To be clear: I don’t favor crude bans on healthcare for kids with gender dysphoria. I favor much greater caution, care, and concern — for the sake of trans and gay kids, and their families. The most prominent LGBT groups have no interest in preventing gay kids from being swept up in this, and deny that is even possible — and are now in the forefront of erasing the very existence of same-sex, as opposed to same-gender, attraction. Any engagement with biology is deemed a form of “hate.” And the more potent the evidence of mis-steps in this revolutionary moment, the more furious and intense the urge to suppress it. The trans movement is now, tragically, the vanguard of the postmodern left’s goal of dismantling science itself because they believe that science is, in fact, merely an instrument of “white supremacy.”

I think he’s right here. When three scientific societies involving evolutionary biology issue a joint statement that biological sex is a “continuum” rather than binary, you know that ideology is trying to obscure scientific truth. And when a university simply fabricates an ideology supposedly held by Thomas Henry Huxley, turning him into a racist when he was not—all in the cause of taking his name off an academic unit—you know that scientists are no longer seeking truth but trying out of fear to adhere to an ideology they see as prevalent.