Here we have a fairly short but scholarly and passionate piece by Nick Matzke, whose name may be familiar to you—he used to work at the National Center for Science Education and posted often on the Panda’s Thumb website. As you see from the article’s screenshot below (click on the image to see the piece or get a pdf), Nick now teaches biology and does research at The University of Auckland.

The backstory, which I’ve written about three times (here, here, and here) involves a wokeish but completely misguided attempt to rename the well known Huxley College of the Environment at Western Washington University (WWU) in Bellingham, Washington. Huxley College is noted by Wikipedia as one the University’s “notable degree programs“, and it was “the first College dedicated to the study of environmental science and policy in the nation.”

Why the renaming? Because, as I’ve explained in my previous posts, the College’s namesake, Thomas Henry Huxley (1825-1895), was supposed to be a racist and a eugenicist. (If you know your history of evolutionary biology, you’ll remember Huxley as “Darwin’s bulldog”, a staunch defender of his friend Charles, who was too timorous to defend his own theory set forth in The Origin.) But Huxley did a lot more than that. He was actually an anti-racist, an opponent of slavery, and a friend of women and workingmen (he campaigned for suffrage half a century before British women got the vote, and gave free lectures on science to poor working people).  All of these facts, in particular Huxley’s antiracism, are explained in Nick’s piece, which is infinitely better than the “case for denaming” put on the WWU President’s website. The latter piece is embarrassingly bad and even, in parts, illiterate.

Click below to read Matzke’s vigorous nine-page defense of keeping the name. Another benefit of reading it is that you’re going to learn a lot about Thomas Henry Huxley, and, I hope, will be appalled at how WWU distorted and degraded his legacy to make him look like he was an ardent racist. (Nick has also posted the essay in full at The Panda’s Thumb.) 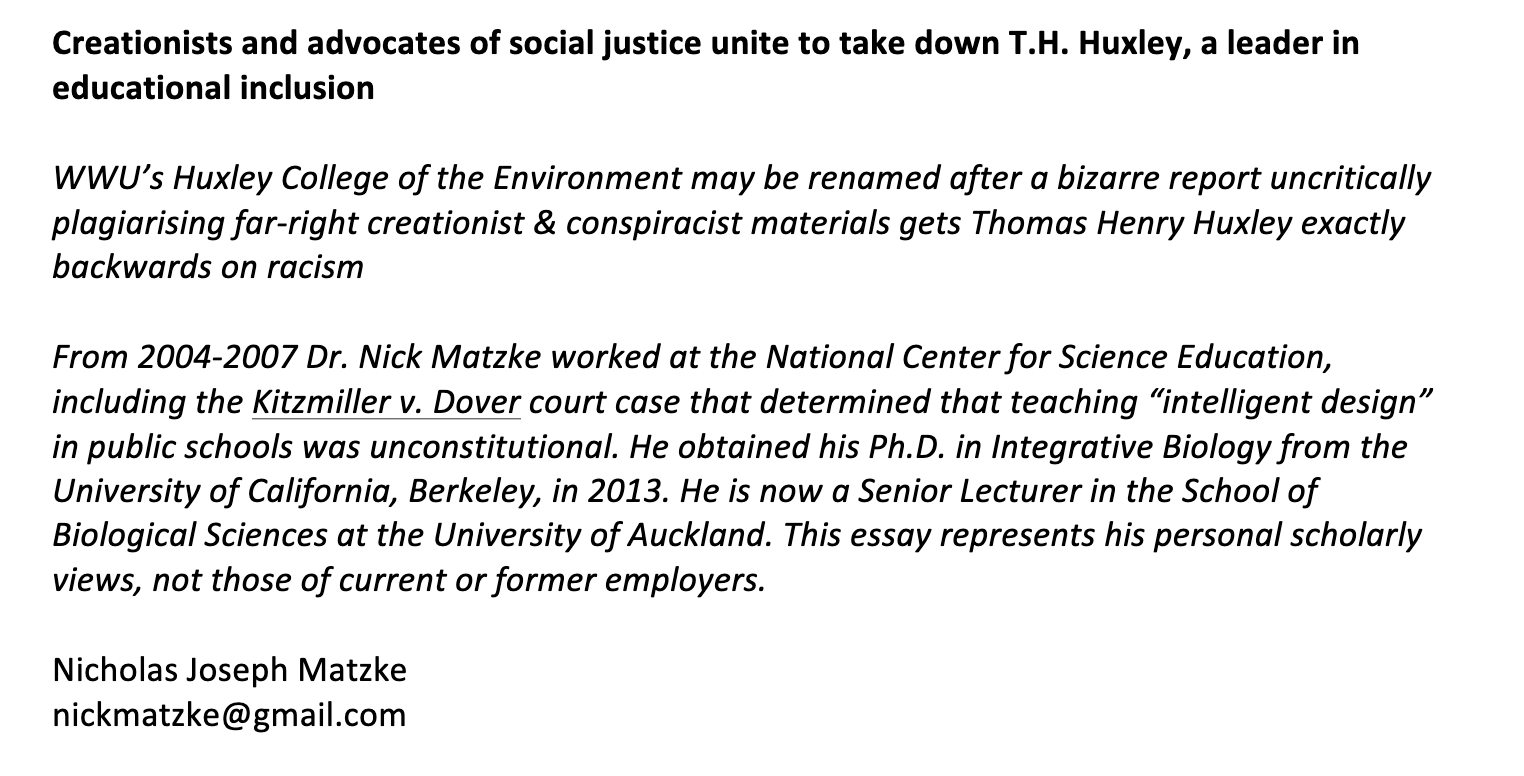 Now let it be admitted that Huxley, like Darwin, did make sporadic statements that, by today’s lights, would be considered unacceptably racist. All of them come from a single essay he wrote in 1865.  But that was early in his career, and by its end he’d established himself as one of the rare progressives in Victorian England, favoring the abolition of slavery, the establishment of women’s rights, and acting out of concern for the “lower” classes.  A few other points in Nick’s report:

a.) Several of the important assertions in the President’s report are simply dead wrong—in fact, the opposite of what Huxley said or what genetics says.

c.) Huxley engaged in three separate anti-racist campaigns that, in fact, made him anathema to the real British racists of his time.

d.) The report tries to tar Huxley by dissing his grandson, Julian Huxley, for being a racist eugenicist. While Julian had some views that could be interpreted as “reform eugenics”, he was an anti-racist. As Matzke notes:

Julian was also the founding director of UNESCO in 1946, and helped draft UNESCO’s famous anti-racism declarations in 1950 and 1952. The Encyclopedia of Evolution says, “largely due to his efforts, the UNESCO statement on race reported that race was a cultural, not a scientific, concept, and that any attempts to find scientific evidence of the superiority of one race over another were invalid.”

But it’s madness to conflate Julian with his grandfather, and mentioning Julian, no matter what his views, was completely irrelevant.

I’ll give one quote from Nick, but you should read his piece:

How does it serve justice to treat T.H. Huxley as if he were [the vicious British racists] James Hunt or Governor Eyre, when he actually was their vehement opponent?  Removing Huxley’s name from the College would in fact be removing the name of a pioneer for educational inclusion, a key figure in scientifically establishing that all humans are one species, and undermining the concept of biological “race.” Doing so while relying on propaganda deriving from fundamentalist creationists and other right-wing provocateurs would be falling into the exact trap arranged by these provocateurs: namely, to drive a wedge between science and the causes of social and racial justice. Helping to drive this wedge deeper cannot help increase diversity, equity, and inclusion in science. Imagine creationists, for the next several decades, going to legislatures and state school boards with a line like: “Evolution is a racist theory. After all, Western Washington University acknowledged this when they removed the name ‘Huxley’ from their College of the Environment.”

WWU hasn’t decided formally on the renaming, but, as I noted, they appear to have put it off until December so it would look like it wasn’t a rush to judgment.  Look at this duplicity! (bolding is mine)

It was worked out in advance, and what we have here is the appearance of due diligence without the diligence itself. It’s a case once again of a university truckling to a mob who knows virtually nothing about the salient issues.

By my own standards, in which a name should be kept if two criteria are met, Huxley College should definitely NOT be renamed. But tell that to the administration, who must meet the demands of WWU’s Black Students Organization as well as many other students.  I venture to guess that almost none of those calling for Huxley’s cancellation knows anything about the man or what he really did.

My criteria for keeping a name or a statue:

1.) Does the name or statue honor the good things that the person did?

2.) Was the person’s life a net good, making a positive difference in the world?

For Thomas Henry Huxley, the answer to both questions is, “Hell, yes!”  Huxley College should not be renamed. But I’d bet big bucks it will, for you know how these campaigns go. 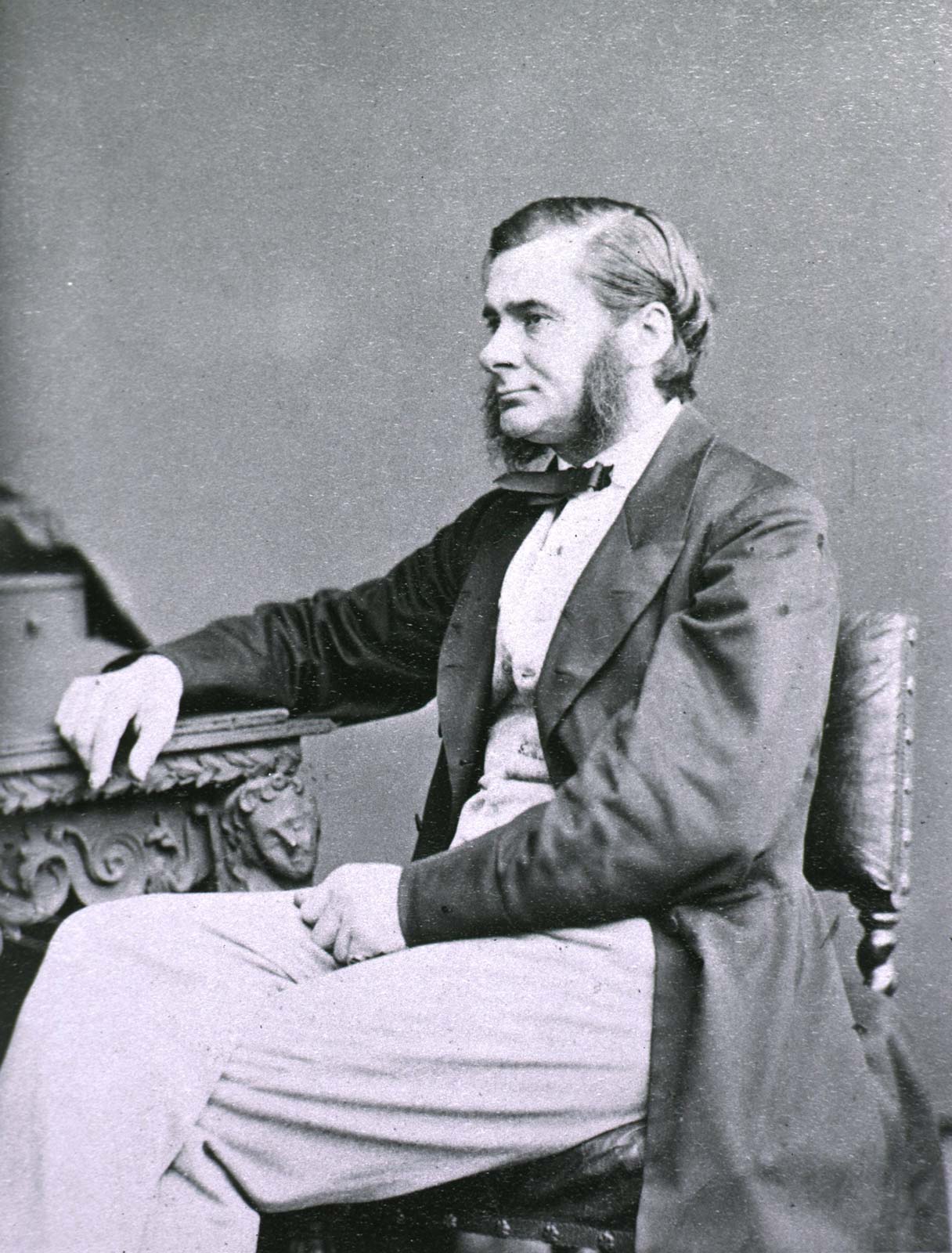